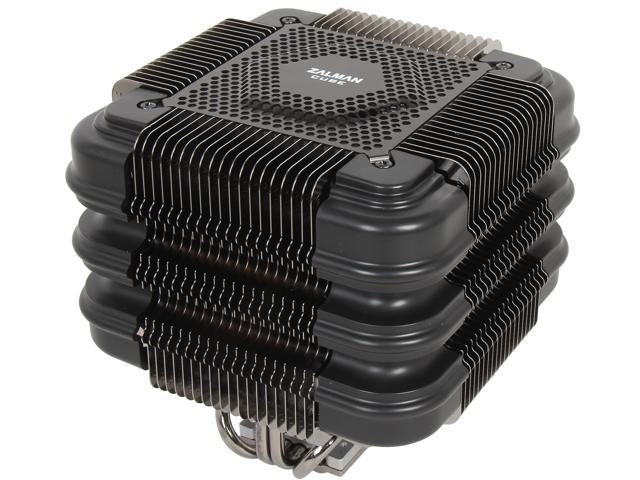 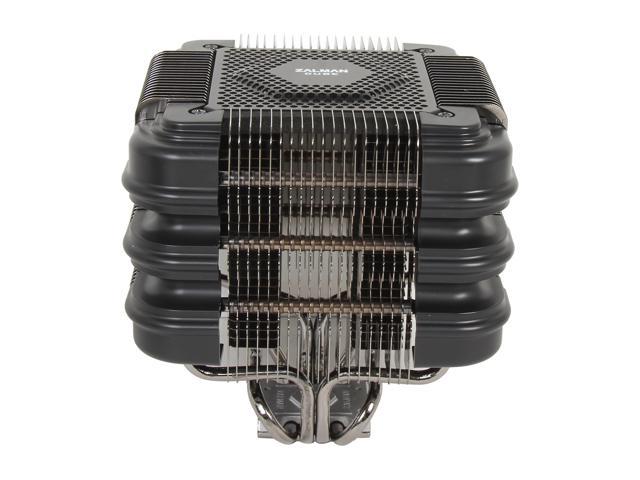 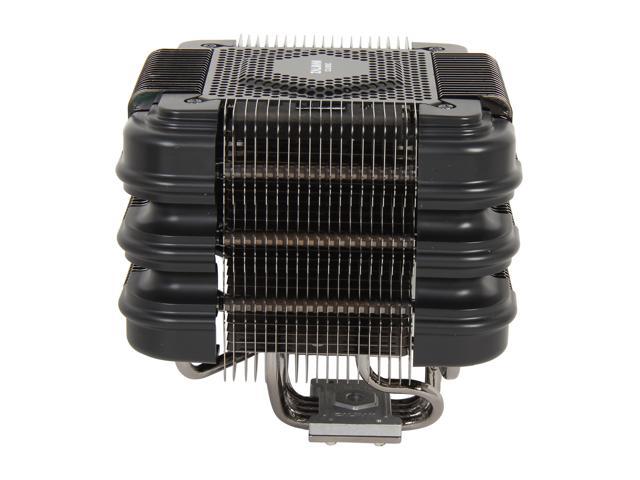 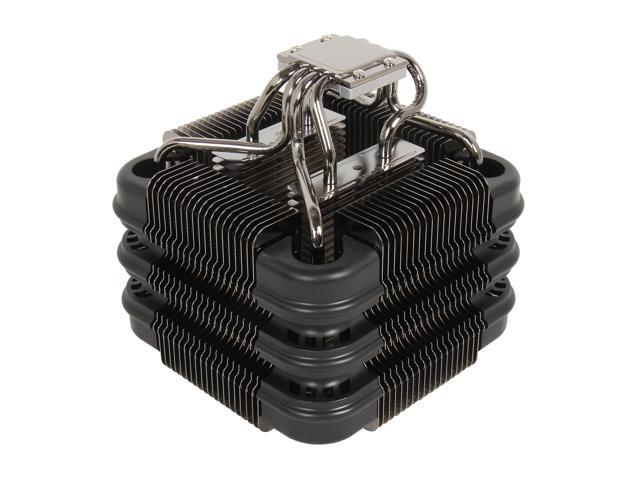 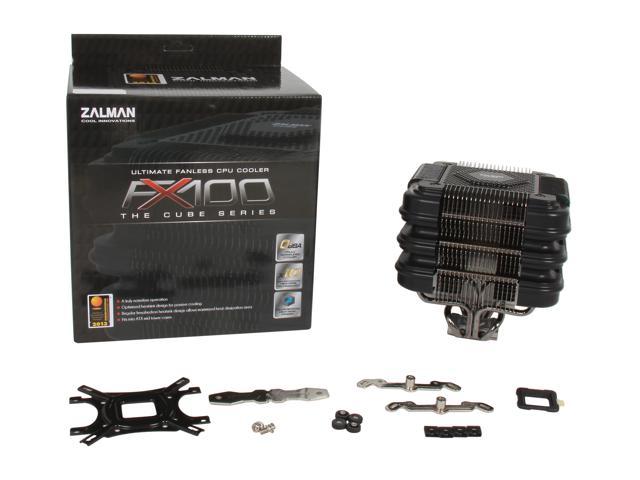 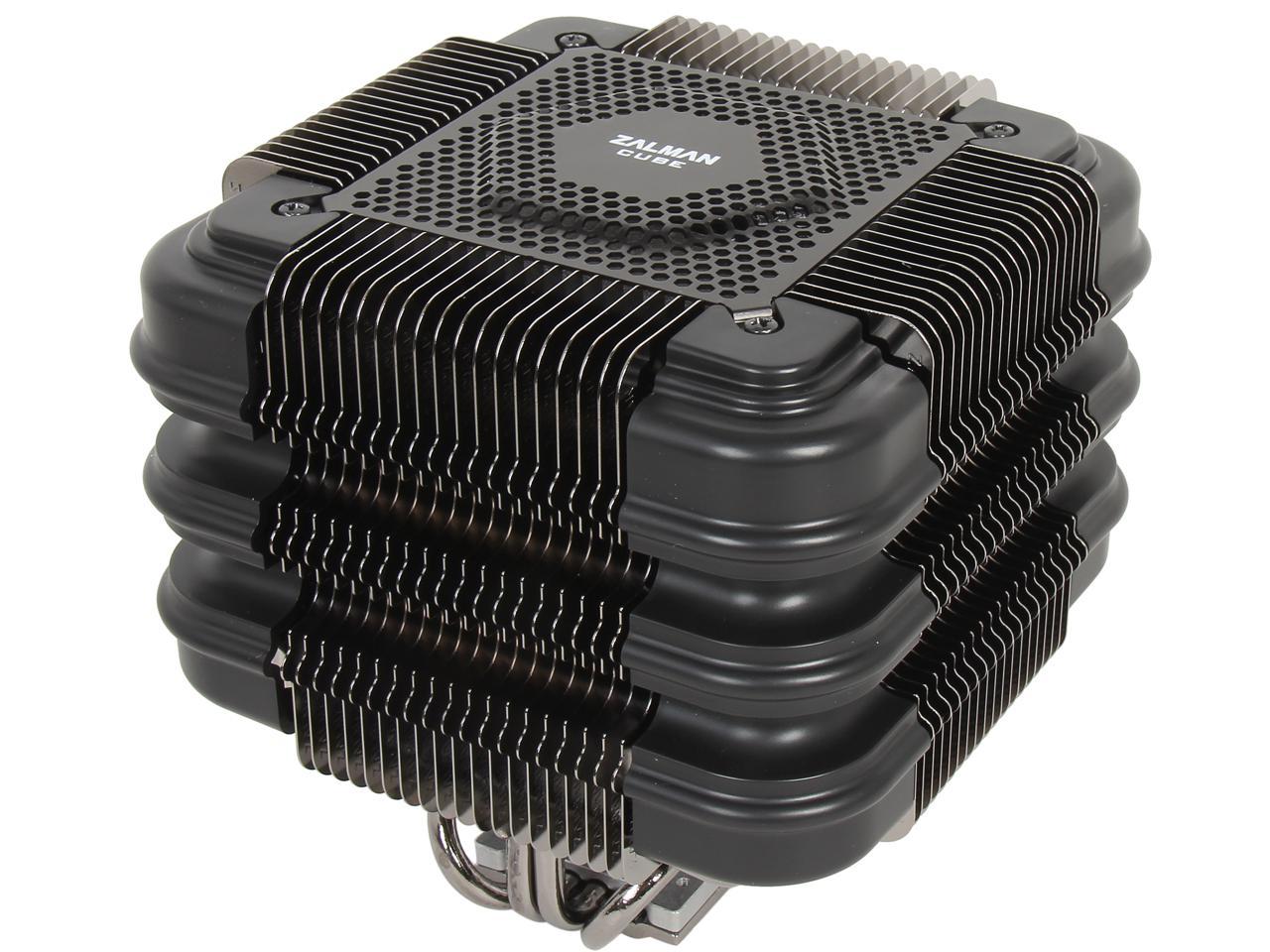 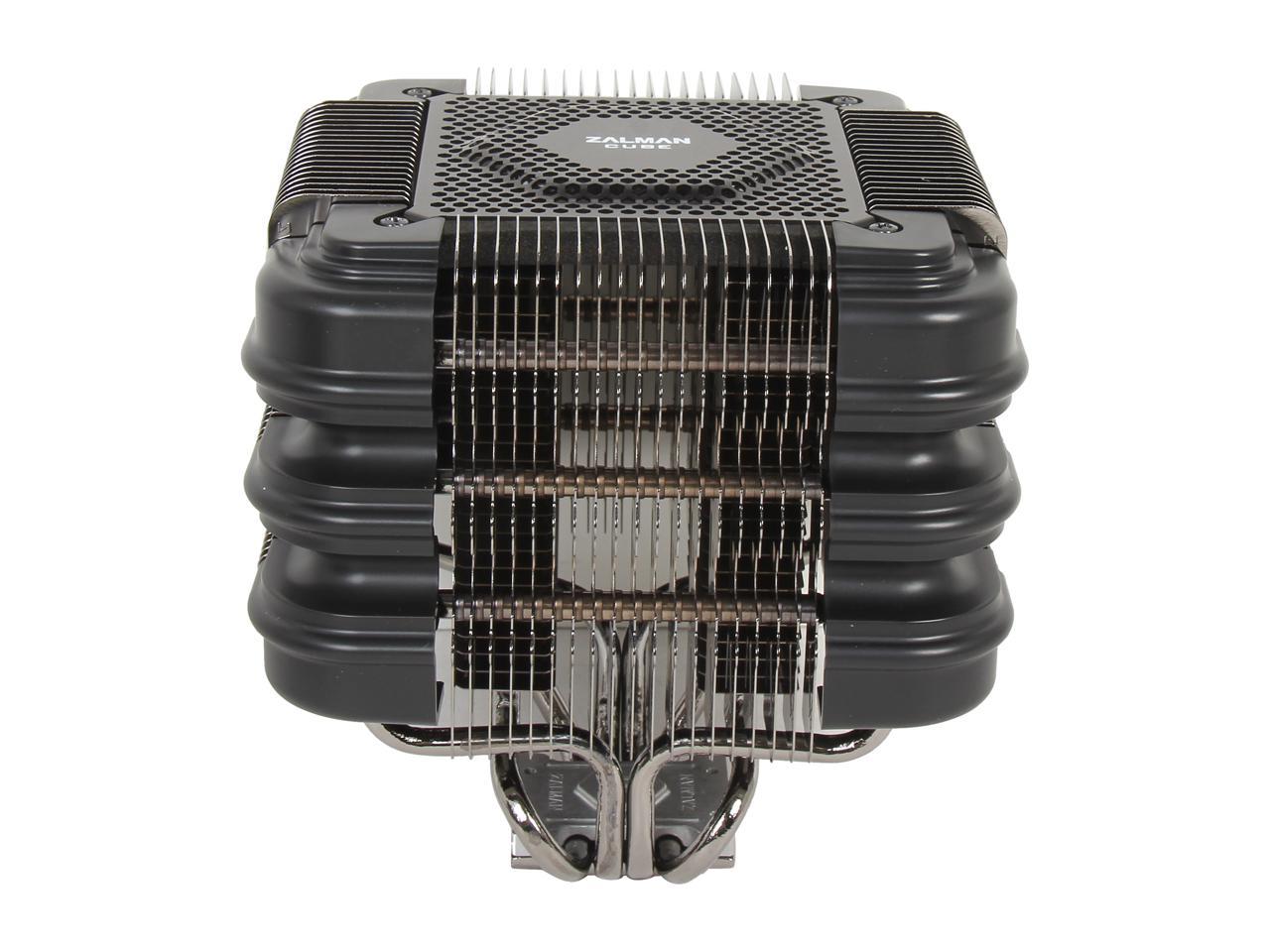 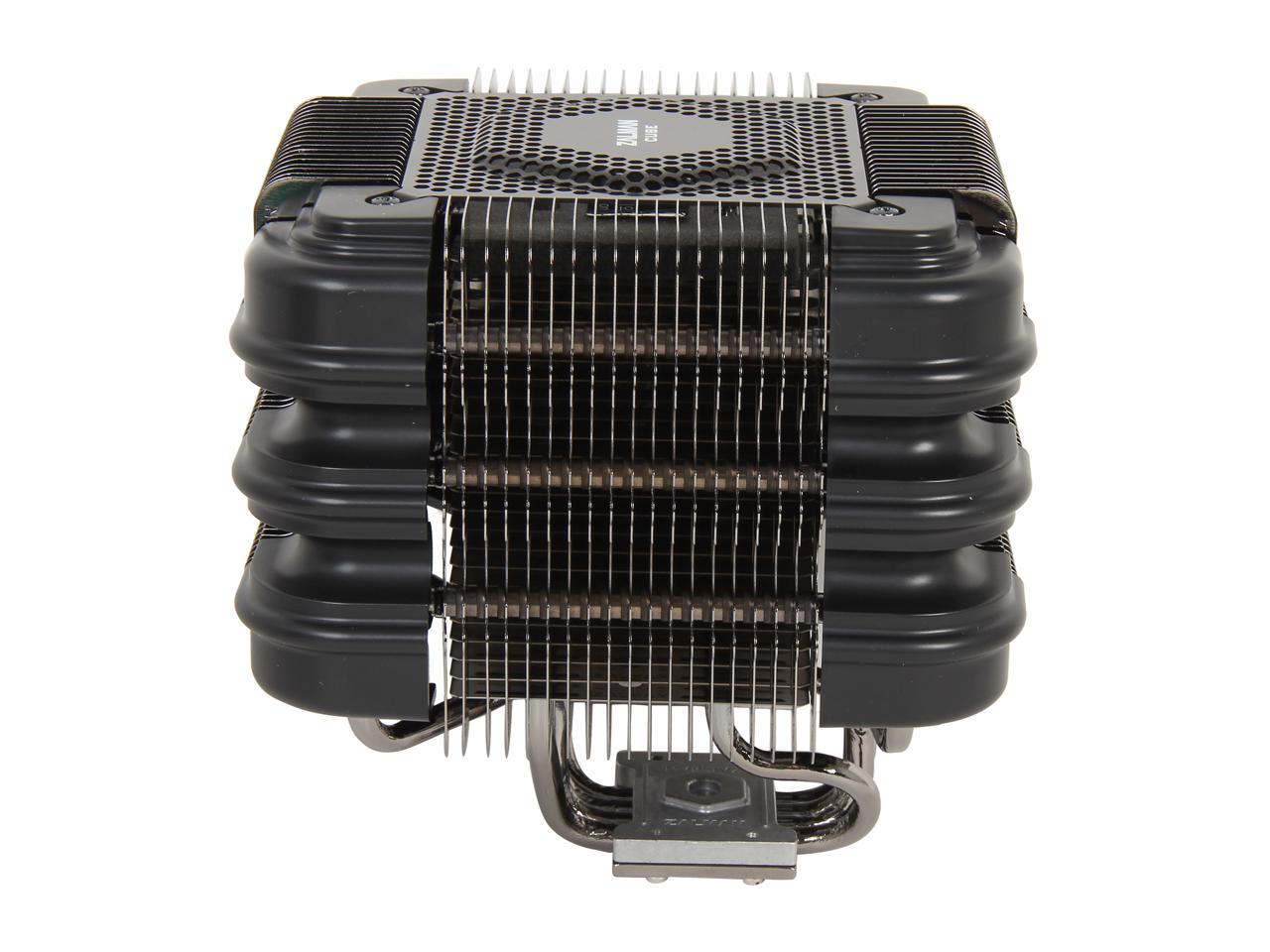 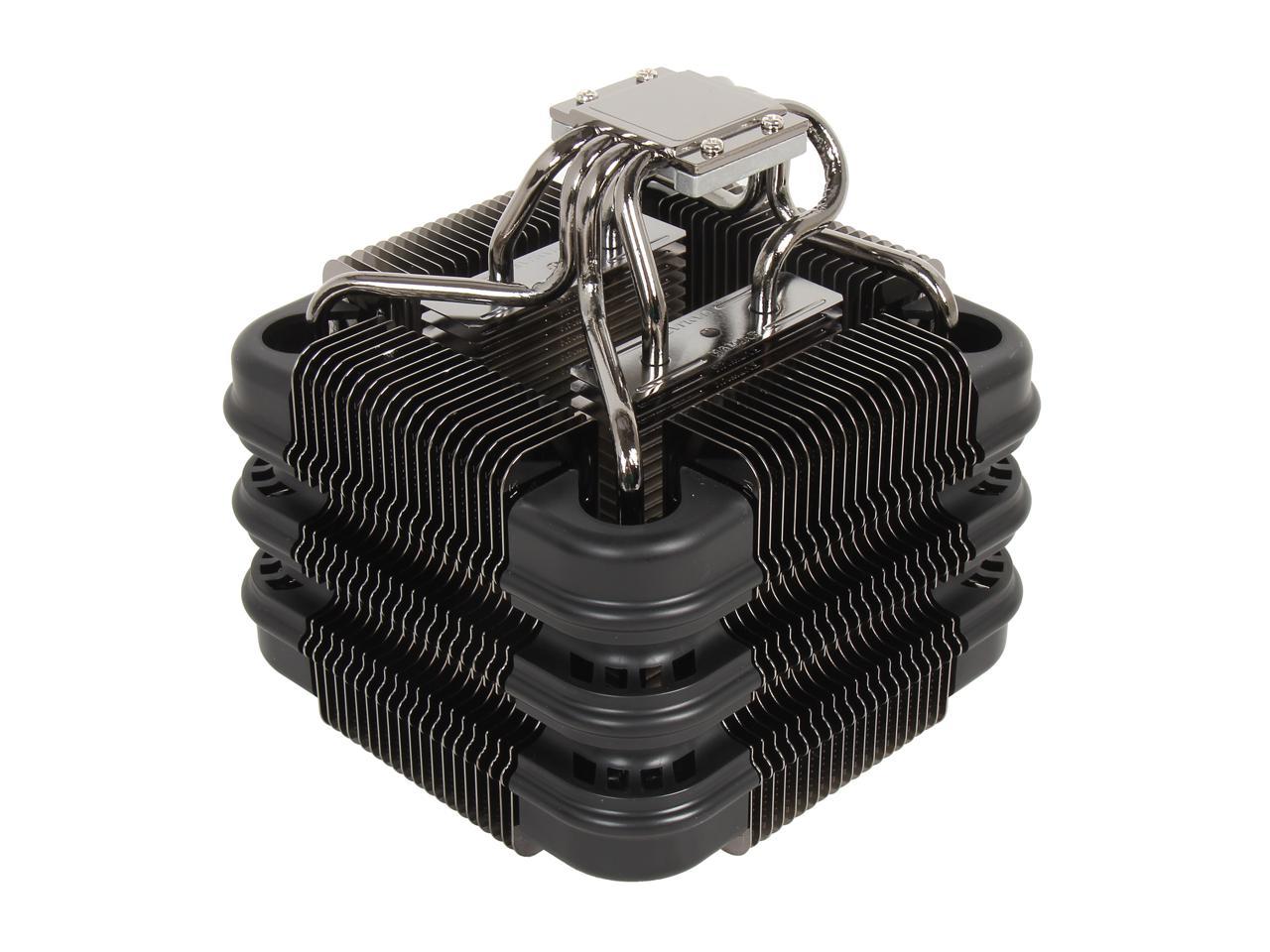 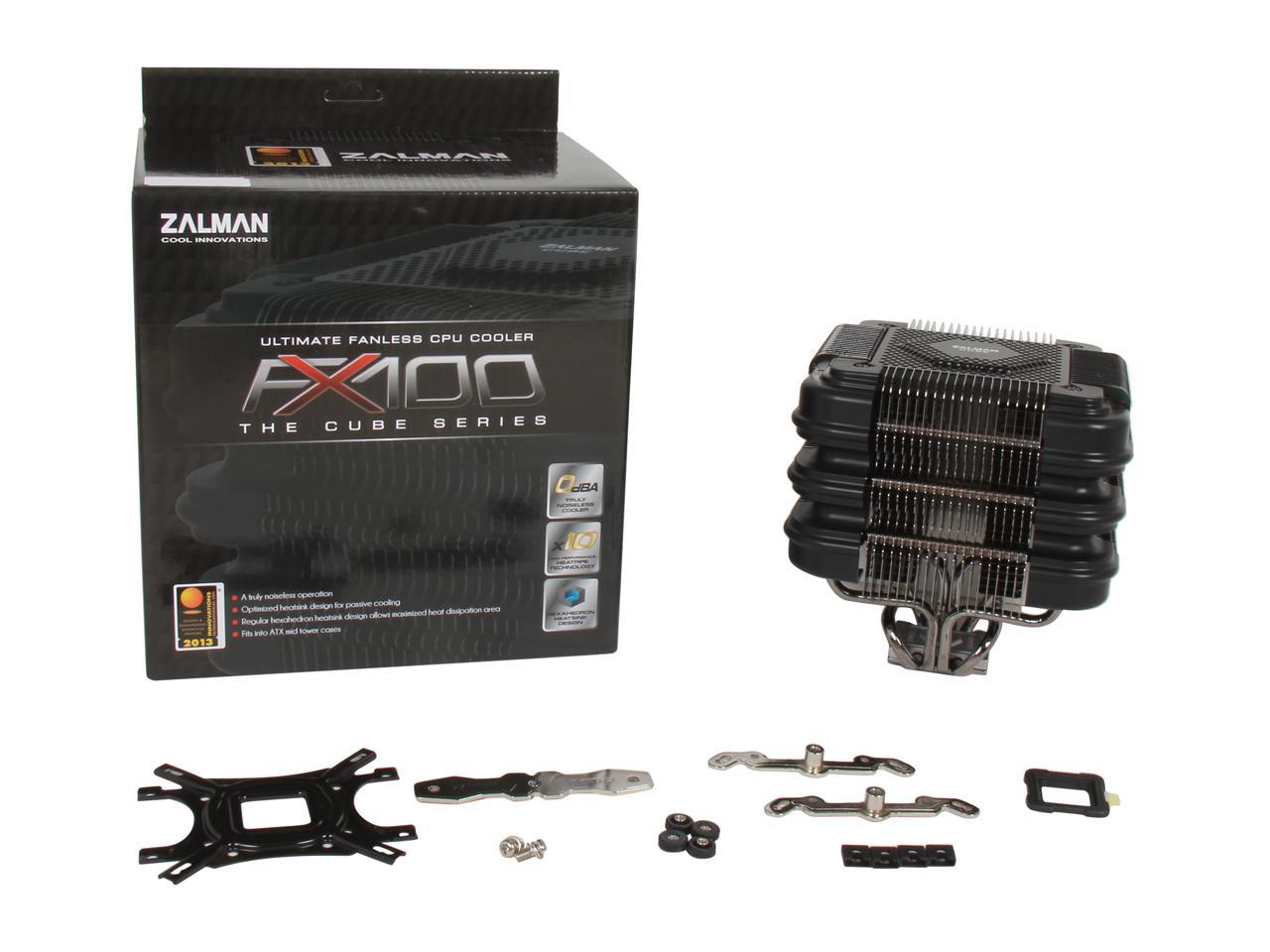 ZALMAN FX100 is the ultimate fanless CPU cooler!  Having received the CES2013 innovation award for innovative technology, it utilizes natural convection to passively transfer heat to the surrounding area. Without the help of fans, hot air gets pushed out of the chassis. As a result, vibration, dust and heat have minimal impact making the FX100 one of the most durable CPU coolers on the market today. Cons: There were a few steps in the instructions that could have used a bit more clarity. Also, I'd like to have known before buying it that I would need either an extra long Phillips screwdriver or a low-profile S-shaped Phillips tool, such as the one I had to borrow to tighten this thing down to the motherboard.

Overall Review: I have a top-mount power supply case (midtower) loaded with a full ATX motherboard, one optical drive, and one hard disk drive. My video card is a simple fanless one-slot PCIe in the first slot just underneath the CPU cooler. I have no case fans - The only fan is the power supply fan. I ran my Phenom II x6 1055T at full load and it maxed out at 79 degrees Celsius, which is only 8 degrees beyond AMD's maximum temp. for this CPU (71 degrees Celsius). Right now, with just a couple tabs open, and couple text files open in Notepad, it's idling around 36 degrees Celsius. You'll need a Phillips with a shaft that is about 6 inches long - The clearance is tight; otherwise the handle of a standard screwdriver would not get in the way.

Cons: - Single pin in the middle of the mounting bracket that keeps the cooler centered, but allows for rotation. Not sure if I did something wrong, but it spins on the CPU lid quite easily. - Base mounting screws require a looong phillips screwdriver >7". There is only about 1/2" clearance, so combination screwdrivers won't work here. I ended up using an iFixit kit with both extensions and it barely fit.

Overall Review: Will make installing RAM a bit difficult, especially the slots closest to the CPU. Would recommend seating your memory before installing the cooler.

Pros: Runs completely passive on a 65w i7-7700; no noise. Great fitment to 1151 socket. Does not block RAM slots or make contact with normal height DIMMs Price! All metal design. Option to remove top cover and add a fan in center of unit. Solid packaging from Zalman Direct.

Overall Review: Remove mobo from case, install brackets, grease up CPU, slap this bad boy on and tighten screws. Re-install mobo. WIN! If you're starting a new build: Install RAM on mobo 1st, then CPU & finally this heatsink. Other reviews say that some parts are plastic, that is incorrect. Obviously, this is not for CPUs that are going to be overclocked. This is perfect for 65w or less CPUs without adding a fan. If you put this on a 91-95w CPU, expect higher temps or add an optional 92mm fan.

Pros: My CPU idle temperature is around 50C and it's silent. This PC will mostly be idle and file serving doesn't really tax the CPU. The silence was the goal so it has been accomplished.

Cons: This thing is a beast, but it did fit. Needs a very, very long screwdriver to install, and was pretty tricky. The mounting feels lose and you can wiggle the huge thing a tiny bit, but it is cooling the cpu regardless.

Overall Review: If you want quiet, this is an investment that certainly achieves that goal.

Pros: -looks fly as no other my friend -this thing is truly massive and awesome -beautiful design -tower of coolness in both senses of the word -very efficient at pulling the heat off of the chip and transferring it to the other heatpipes -good temps with no fan -zalman is pressed on every fin of aluminum -black chrome -nice mounting hardware *see other thoughts

Cons: -difficult to mount, takes patience -comes with unnecessary plastic insulators on the sides -of course you now have to work around that massive tower of coolness -mounting hardware is not labeled -instructions are not clear (enough) -packaging could be better, when mine arrived, my mounting hardware was outside the box -lil bit pricey for me

Overall Review: mine's mounted on a intel socket, no problems; for me anyways. to note, yes, you can move the cooler around while it is mounted. however, you can only rotate it. i could not "slide" the cooler around on the chip. but that came to benefit me when putting the pc back together, as i mounted this bad boy in a mini tower. if you can slide it around, i would guess it's because you have mounted it wrong. you can blame the ambiguous instructions. also, it is quite scary on the final steps of installing; be sure to hold the thing steady so it will not fall over! another note: little stickers for intel socket, padded stickers for amd. also be sure to look closely to the pictures, they're basically the instructions, not the text. take the extra off. at first, i was thinking "i don't like this, i've made a mistake." lemme tell you; it looks 10x better without it, showing off that beautiful black chrome and those ten heatpipes. and i'm sure that it's not helping to cool. you won't be throwing away the zalman name you paid for too, as it's pressed on every fin. i have an open-air pc. i'm sure that's affecting my temps. being mounted in a mini-tower, i also have one fan very close, pulling, and a top mounted psu, also pulling like two and a half inches away. i'm getting temps in the 30's range (Celsius) doing easy work like internet browsing. on prime95, i was surprised; it maxed at around 85 degrees when it had been running a torture test for about an hour. micro atx board owners, be ready to sacrifice all but two pcie slots my gpu seems a lot louder now

Pros: Aesthetically, it looks very pleasing in the case once its finally mounted, and it is designed well in the respect that it manages to be so massive without impeding on peripherals.

Cons: The reviewer who mentioned steady continual temperature increases until shutdown hit the nail on the head. In my case I am sure that it has something to do with not mounting with the socket FM2 properly. This thing really is MASSIVE, installation in a uatx case is not for the faint of heart, althought I dont imagine installing it in a regular case would be much different. Marketing should state that an extra long precision screwdriver is needed to install this cpu cooler. I was practically giddy about this heatsink to be the centerpiece of my HTPC which I was aiming at making as close to 0dBa as possible. (Rosewill Fanless silent powersupply, HIS fanless silent video card, and I was hoping this Zalman CPU cooler but unfortunately that will not be. A tight enough seal cannot be generated when mounting to the cpu with what Zalman provided, at least for a FM2 socket. It fits far too loose to the point to be able to move around slightly which Im sure does nothing good for heat transfer.

Overall Review: Just hoping I at least get my $10 rebate from them and that Im not instead given the run around.

Pros: Purchased a year ago at an unbelievable price for my AMD 8350 processor back when I had the processor. Did a tremendous job cooling processor. Of course, counting on air space in tower case as well plays a huge part on how this cooler cools any processor this sits on.

Cons: Installation is difficult and once installed the heat sink is still loose with the screws tightened all the way due to a poorly designed retention bracket. Avoid for socket 1155.