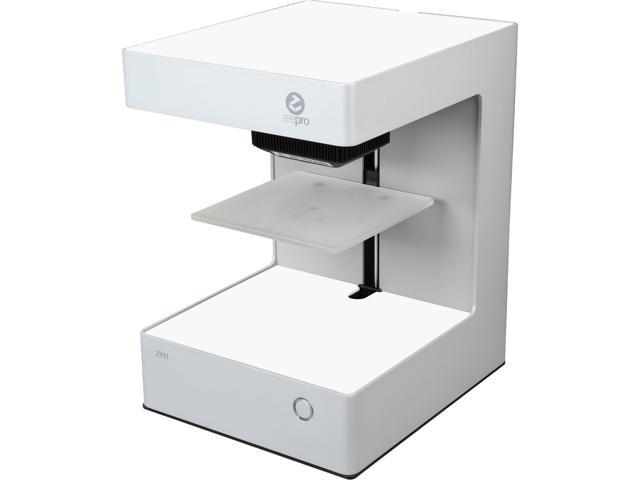 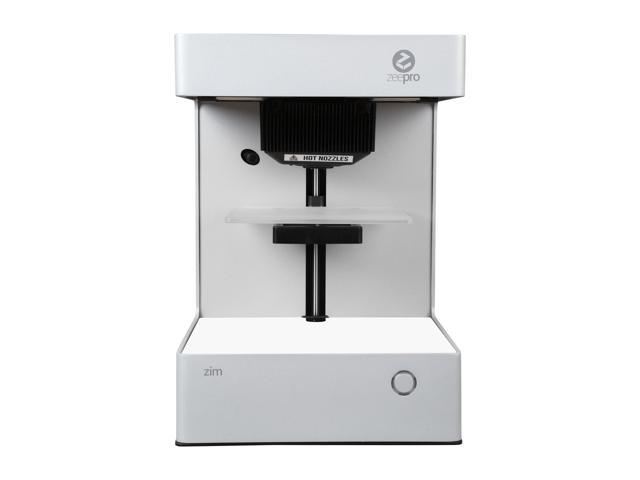 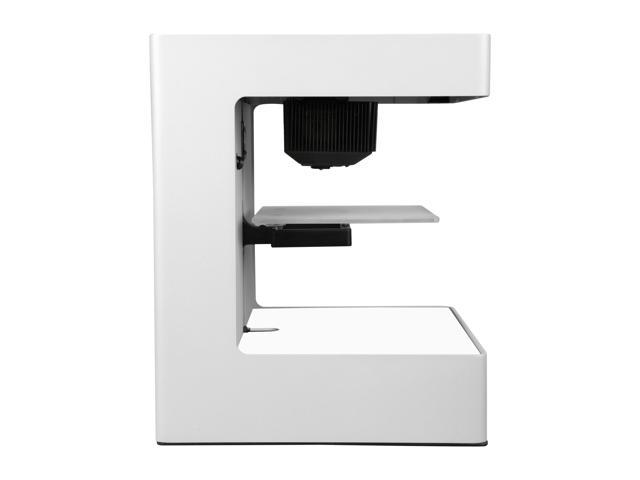 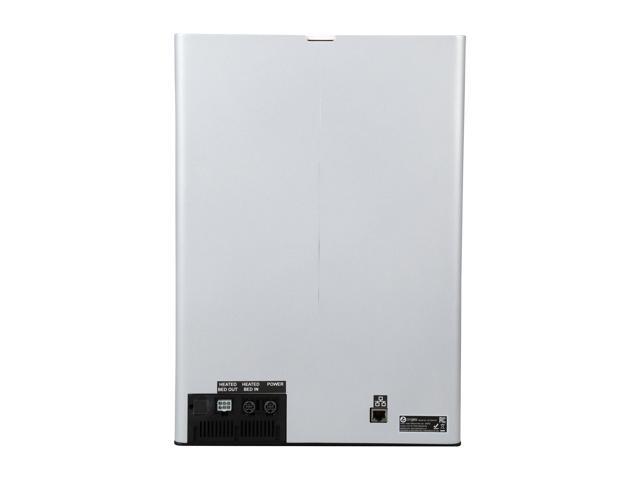 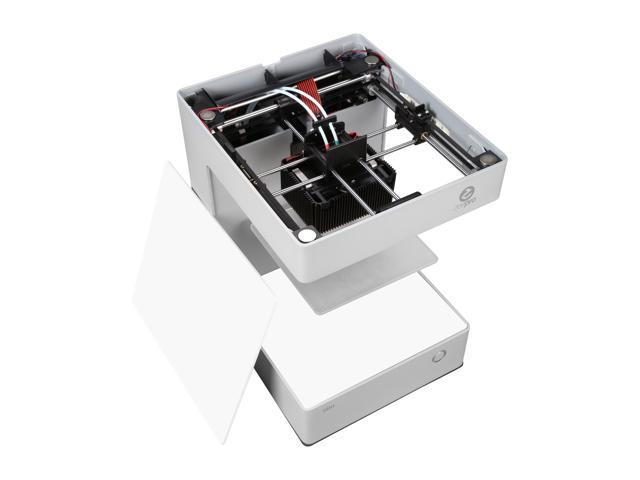 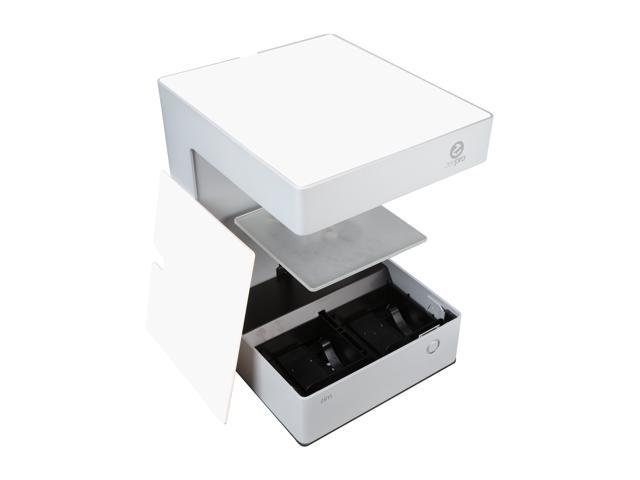 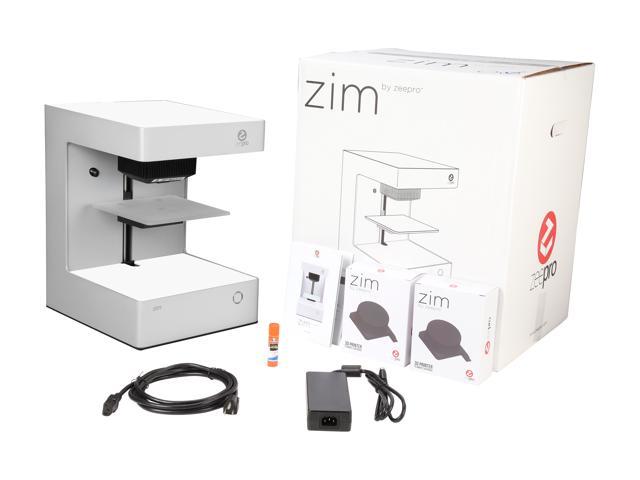 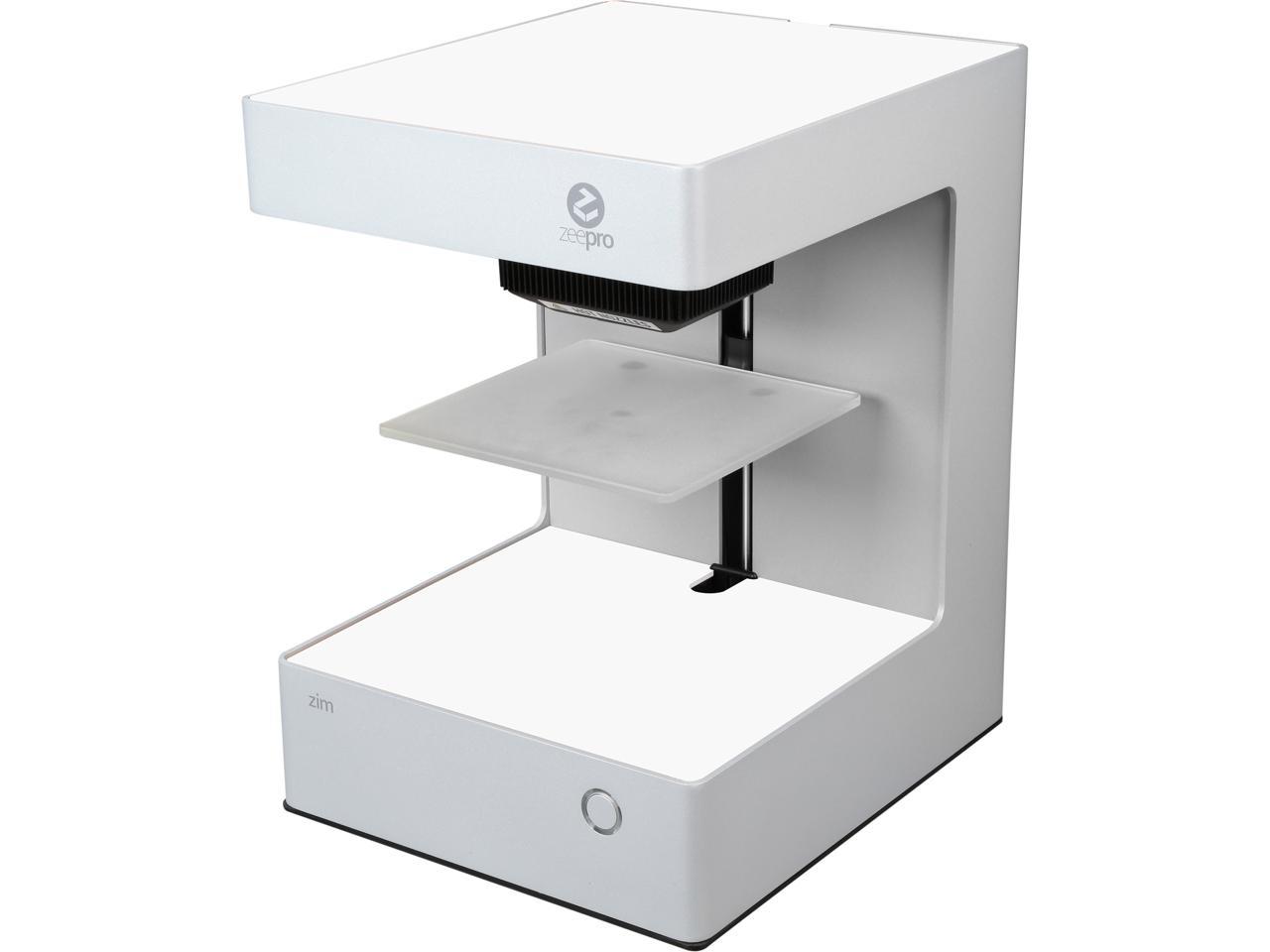 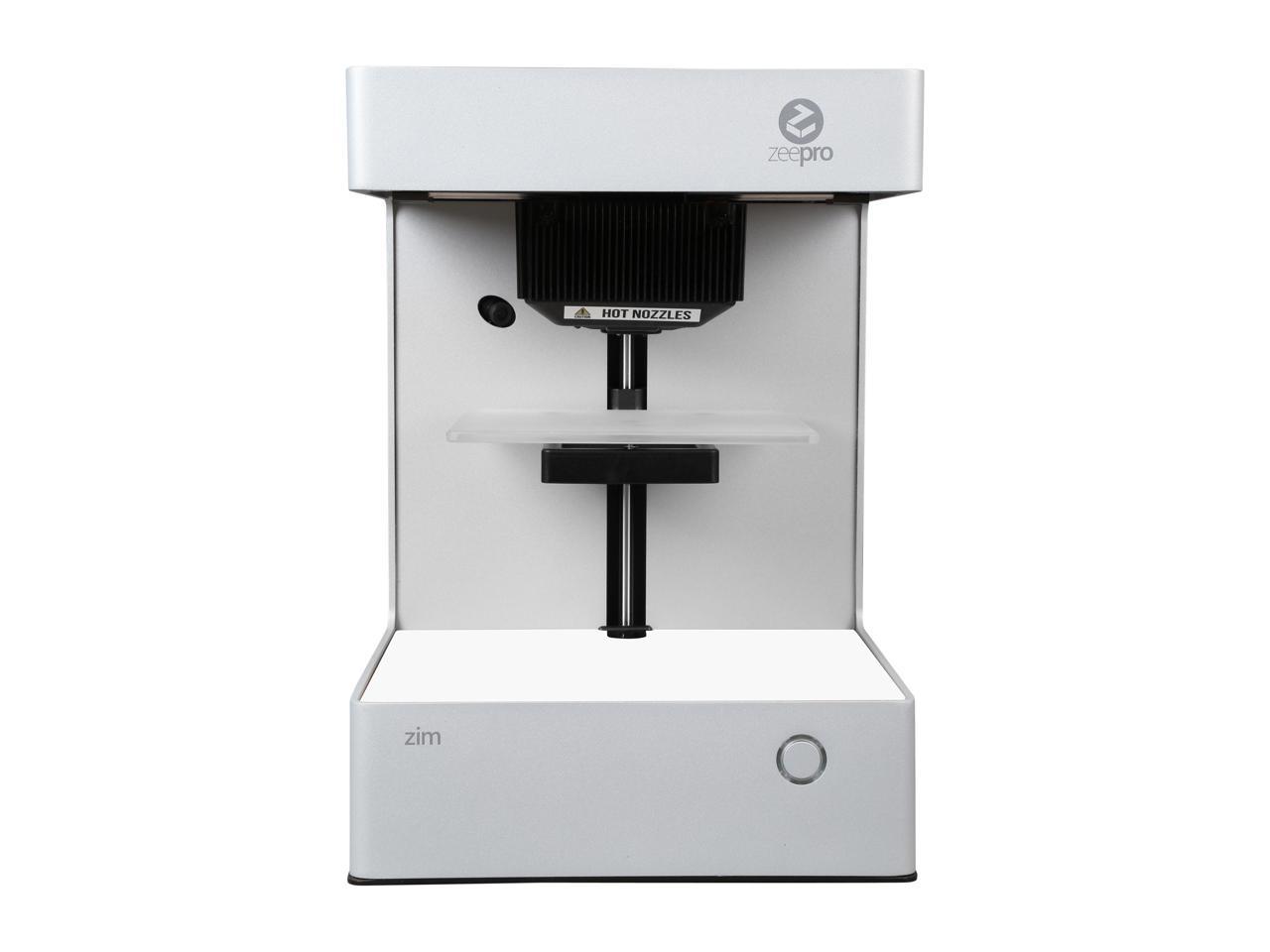 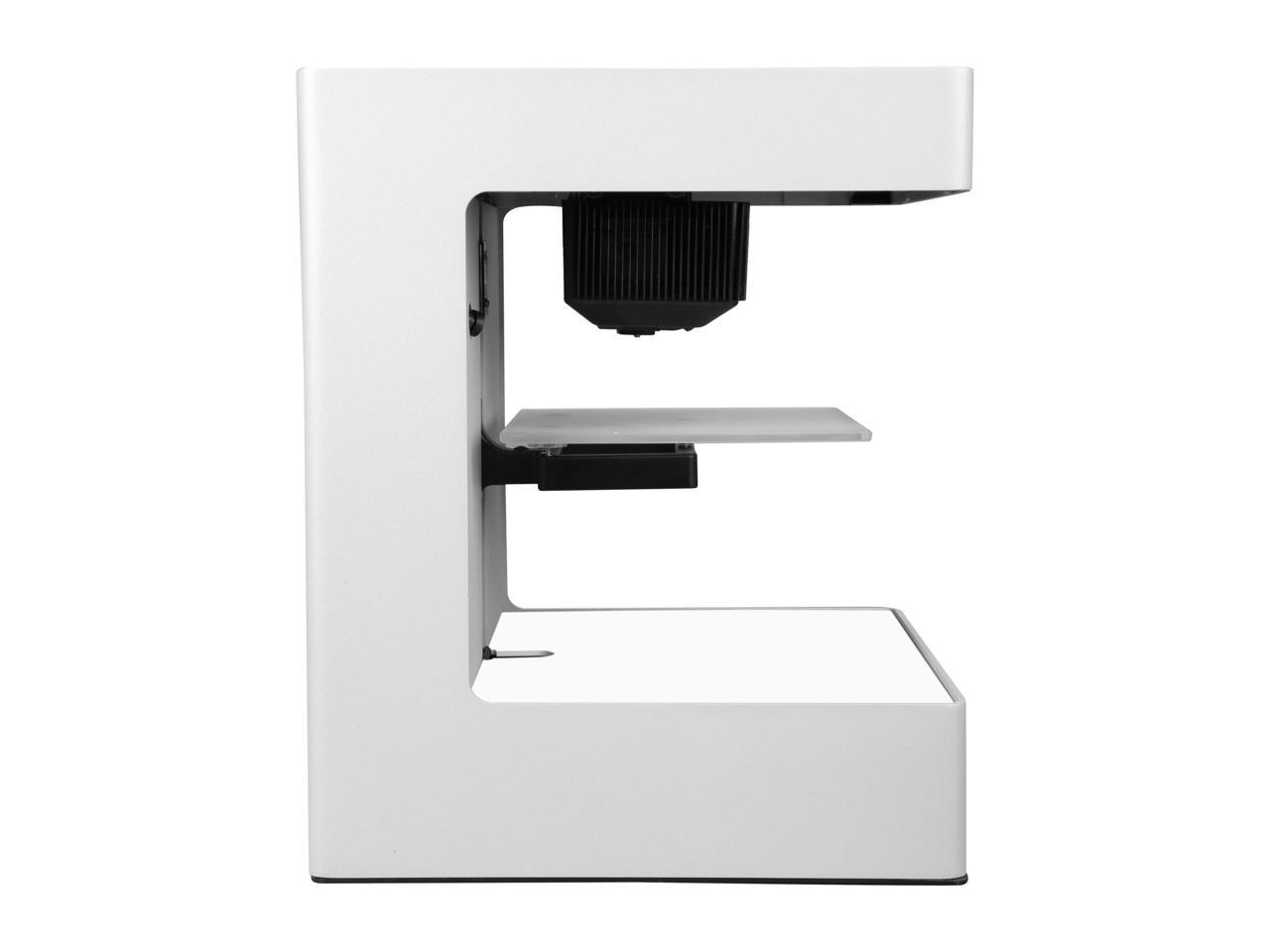 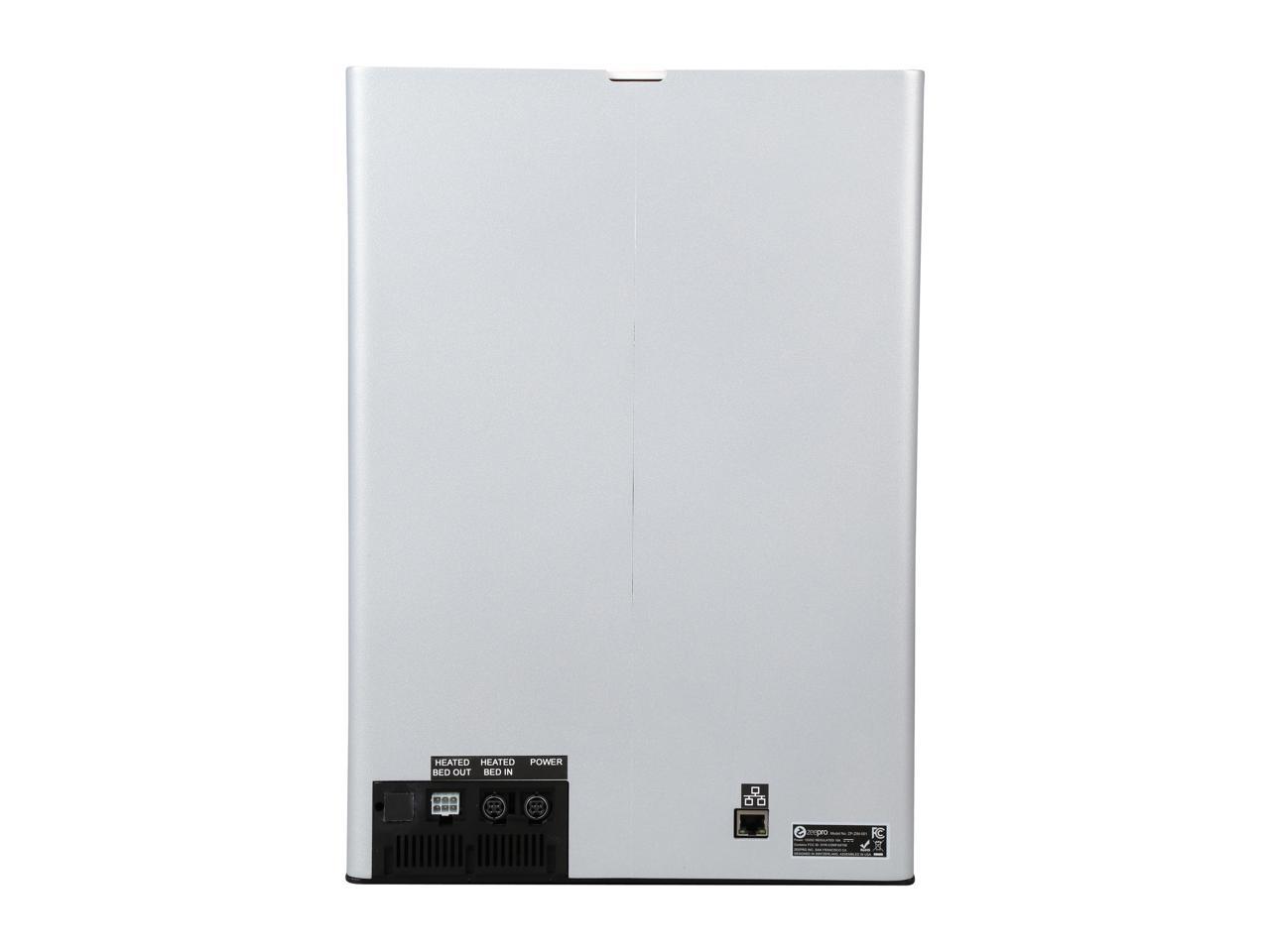 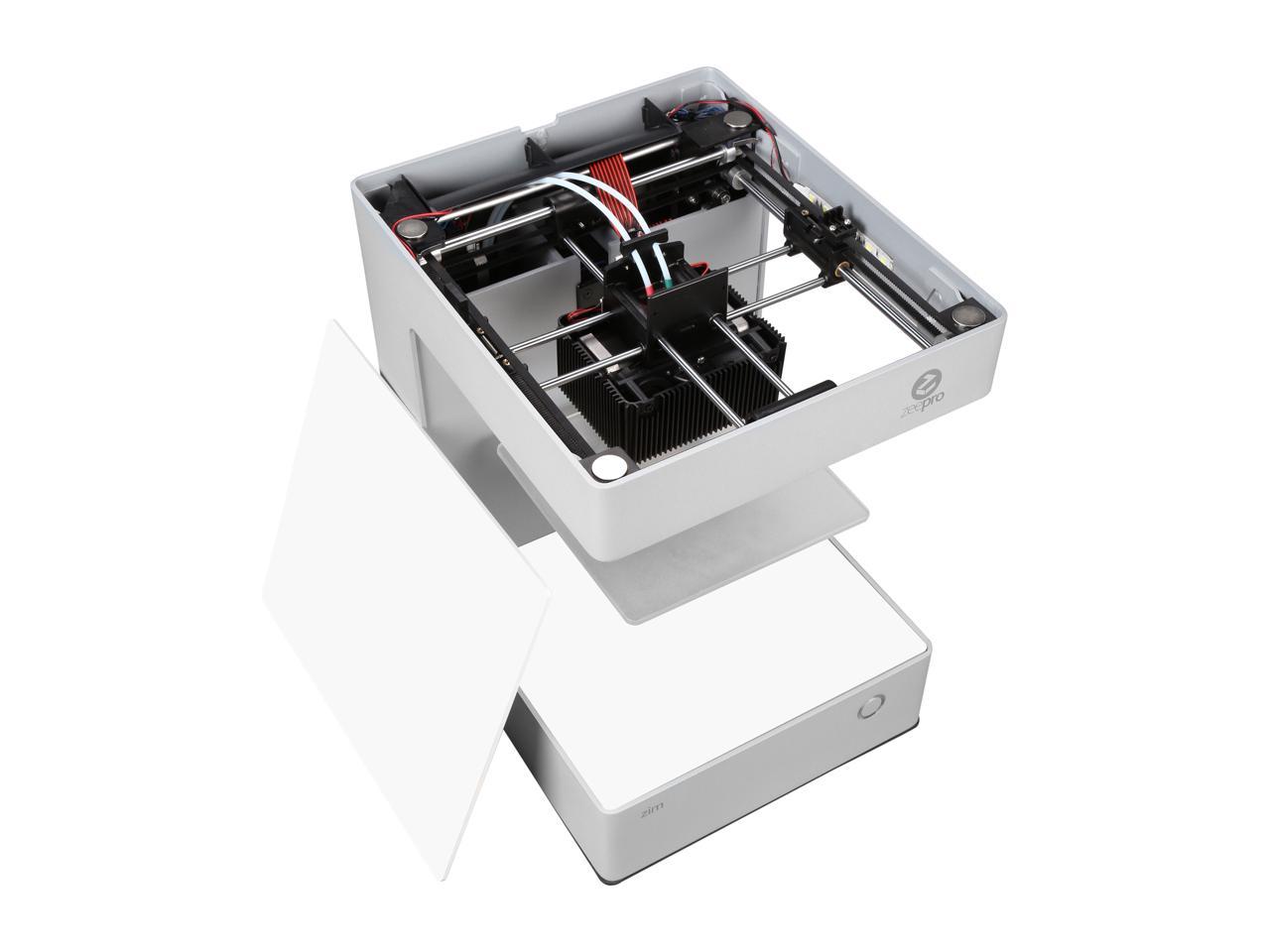 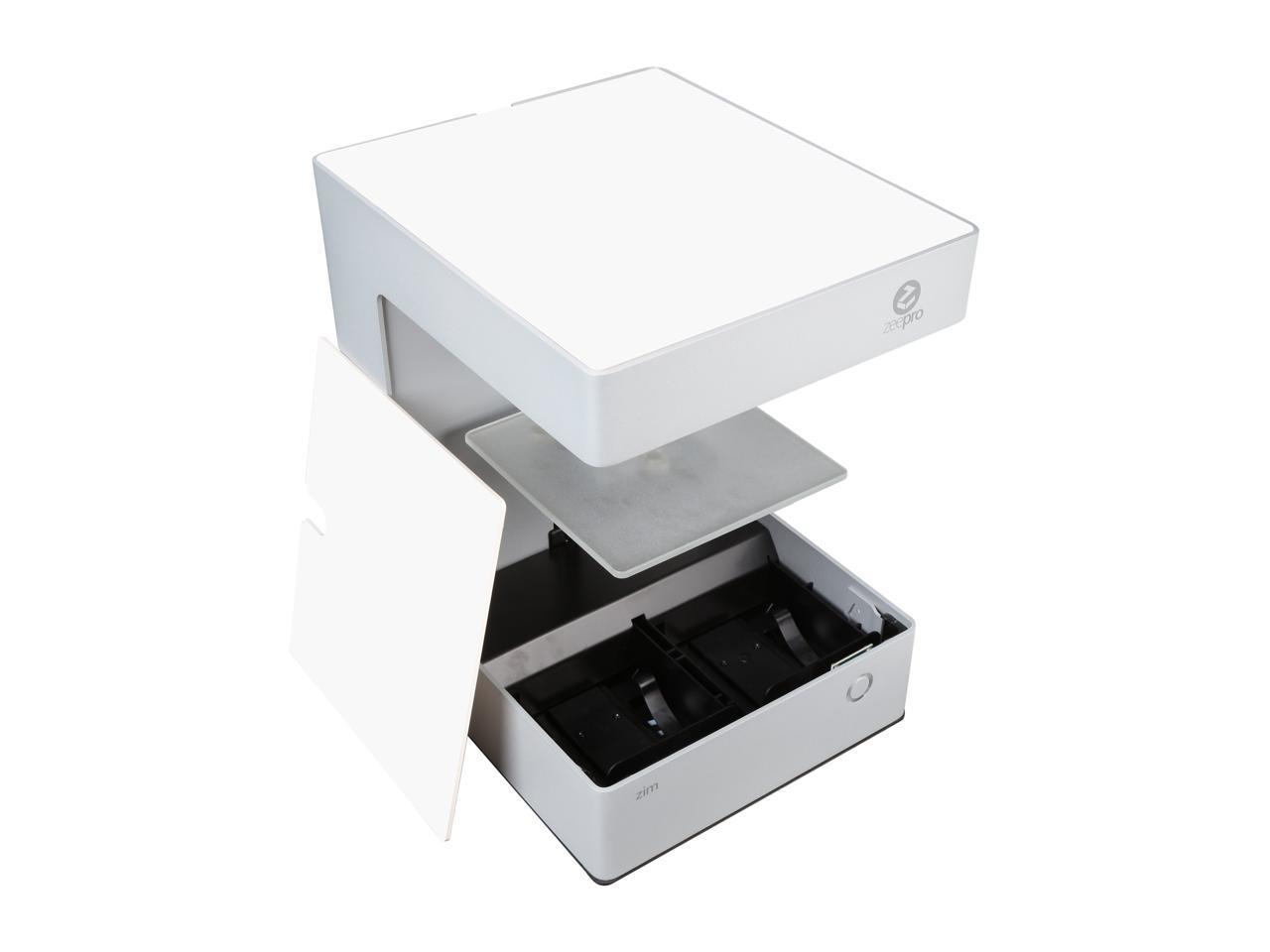 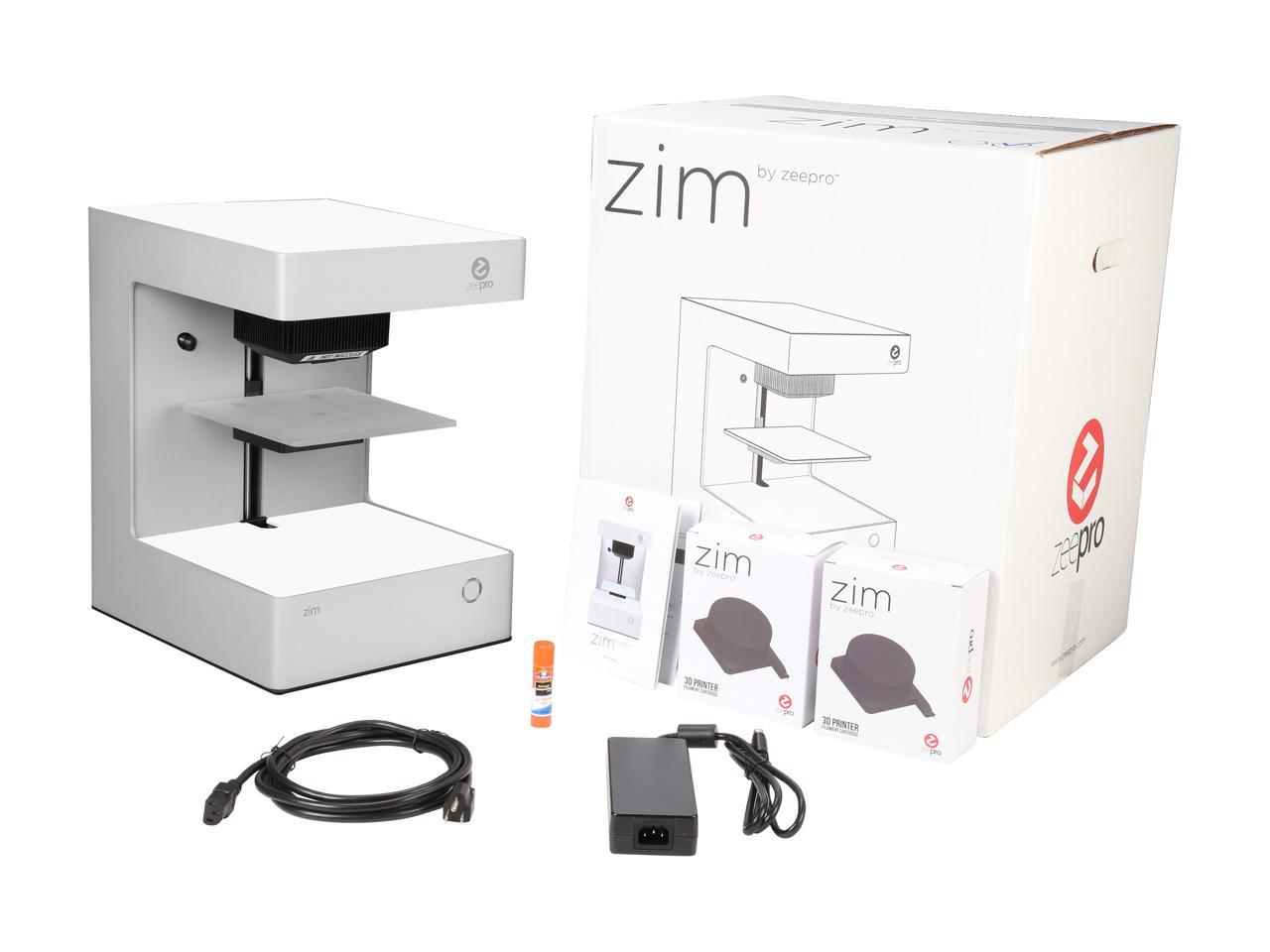 (6) Write a Review
OUT OF STOCK.
Please note that this product is non-returnable and non-refundable.
Overview
Specs
Reviews

Based in San Francisco, Zeepro is an innovative start-up with a unique approach: Make 3D printing as easy as possible.

By connecting to ZeeproShare.com, you can print on your Zim from anywhere and from any device (smartphone, tablet or PC).

Thanks to the Zim's HD camera, you can monitor your print in real time. And once the print is complete, a time-lapse video is automatically available for you to share on social networks or through email. Who said you must be an expert to master 3D printing?

Designed in Switzerland and assembled in California, built from a single piece of aluminum, Zim will fit and shine in any space. We also made sure that Zim remains silent and quiet while printing. Zim leverages its internet connection to deliver best-in-class slicing speed thanks to its latest 'cloud slicing' feature. Slicing has never been so fast!

Pros: Nice solid frame. Nice looking machine. Prints decently when dialed in (though has a very difficult time with some models). Some aspects of the web interface are nice, like being able to check on a print from anywhere on your phone or at work. Leveling system is easy to use. Lighted platform is nice, and camera view and time lapse feature can be handy. Great customer support. Wifi is nice.

Cons: Proprietary software implementation and is clunky at times. The slicer is extremely slow, and often crashes while trying to slice. Using an external package like Simplify 3D is not supported. Some features that would be nice are entirely missing, like being able to lower the platform to apply glue stick/tape once the model is selected. Web UI camera view doesn't work on Android devices. We tried a Google Nexus 10 and an HTC one, running the latest Android versions for those devices. Didn't seem to work on our ipad 2 either, though it did work on an iphone 5s. Sometimes doesn't work in Chrome, but usually does work in Chromium and Firefox. Take away is they haven't worked out the kinks yet and software is a work in progress. On the hardware side, the dual extruder is a mixed bag. It doesn't print very cleanly when using more than one color because the ooze from one extruder sweeps over the plastic just left by the second extruder and leaves discolorations. It also snags prints if the nozzles are not perfectly leveled with each other (mine were not from the factory, but I've since adjusted them fairly well). PLA that often curves up on an overhang also snags on the second extruder. For these reasons, I often opt for a single extruder when printing, the quality is better. There is also a bug where the extruders get mixed up between left and right that can lead to other issues. The cartridge system is problematic. It locks you into Zeepro filament cartridges. The capacity of the cartridges isn't that much, and they are priced higher than alternative filament available. Also we experienced cartridge jams more than once. The cartridge design is weak where it makes contact with a lower extruder feed stepper. I do not believe the cartridges could withstand repeated removal and replacement without cracking in this area. If they crack or weaken, the ability for the lower stepper to feed filament is compromised. I've noticed the cartridge management often gets jammed when loading or unloading, requiring manually heating the nozzle and removing the filament. Do not expect to change colors on a whim. I believe this is partially due to the weak cartridge design causing the lower feed stepper to make inadequate contact with filament, causing it to slip and subsequent jamming. There is no automatic bed leveling (but the manual 3 screw system isn't too bad). It appears the Zim requires network connectivity to be used. There is no direct USB connection. There is an ethernet jack on the back, and Wifi.

Overall Review: This printer could be nice once some of the software issues are resolved. Inability to use a 3rd party slicer software, like Simplify 3D, is the single biggest drawback to this machine at the moment. Secondary to this is the proprietary cartridge system with weak feed mechanism. Also it's a bit pricey when considering some of the excellent alternatives out there, equal or lesser in price. While admittedly, these don't have the some of the fancy features of Zim, in the end the ability to slice and print is what should distinguish 3D printers, and this is where Zim falls short compared to the others.

Pros: This printer has a really nice design from the outside and also the technical side seems to be really good - unfortunately the software isn't that good...

Cons: On the software side this printer is so limited you really can't operate it properly. The internal sofware has a built in slicer and there is no way of uploading your own gcode. It's incredibly slow (under 30 seconds slice time for a small model on Slic3r, more than 5 minutes on ZIM). The proprietary cartridges can NOT be refilled as they're tagged with RFID: so no cheap PLA or ABS, you have to buy their cartridges for 3,3x the price of standard filament.

Overall Review: If the ZIM will ever be open to upload own gcodes and you can operate it with standard filament: buy it, but I guess there are perfect 3D printers here which fullfill your needs for a 3D printer much more than this 3D printer from Zeepro. (I own 3 3D printers by the way...)

Pros: Nice aluminum frame. When it can be made to print, it gives prints about on a par with a PrintrBot or a Replicator 1. Built in webcam and ethernet / wifi connectivity. Very responsive customer support.

Cons: Proprietary and locked down. You can import your own obj, stl but not your own gcode. You must use their slicer that is inside the printer itself.. It does not have enough RAM for larger prints ( such as can be made by Autodesk 123D Catch). .. Cartridges are not refillable and have an rfid chip inside to track usage... You have to buy Zeepro filament and cannot use cheaper filament or try out other types of filament like laywood or nylon unless zeepro decides to offer those. There is also no front control panel for immediate adjustment.. Entire control system is web based.

Overall Review: Would be a fantastic printer for $800, no vendor lock-in, and ability to use third party slicers on more powerful hardware.

Cons: Company out of business. Tragedy with the owner. :-( No warranty. No support. Make your own spare parts.

Overall Review: Worth about $500 as a printer, when compared to other FDM printers... though even a Printrbot has spare parts you can buy and can be used with any software you like. This banger needs you to either resolder on a USB connection to the internal board... or to remove the internal board completely and put in your own Rasperry Pi , then hook up Octoprint if you want to get decent prints. If you want an overpriced printer to hack and remake, this is the printer for you.

Did you find this review helpful?
Anonymous
Ownership: 1 month to 1 year
Verified Owner
I would not recommend this printer.1/8/2015 1:48:44 PM

Cons: Despite the machine is beautiful and hardware is fine the software make the printer impossible to use and the the mentality of the company behind the printer only make it worse. Zim was supposed to be an opensource (software) printer, but Zeepro decided to ignore that and did not release the entire software. If that was the only issue it would be ok, but the software is very very slow, it is not capable of printing complicated models it lacks basic features. Zeepro says that will solve the software by creating an cloud based slice, but that is only a way to create another tool to possibly charge users. Zim do not allow you to plug on your computer and use your own slicer. The proprietary cartridge is vary very week, has a lot of problems with filament breaking inside it and it costs a fortune.

Pros: First 3D printer; I am new to 3D printing and the zim really looks beautiful and the experience has been great so far. I wanted the printer in my house and the zim looks like a piece of art. Since I am new to 3D printing it took me longer to become familiar with all settings. I launched a few trial prints to reach top quality. It would have saved me a little time if I would have adjusted the platform before printing but this was easy. For me printing objects in 2 colors was needed and the cartridge system is really easy. I did have some questions setting up the machine and had to check with their customer support. They got back to me quickly and helped resolve my questions. I really like the idea that I can use my tablet to control the printer

Cons: I only got my Zim printer for a week so it is too early to say but will definitely update my review if issues happen going forward

Overall Review: I'd definitely recommend this printer to someone who is looking at 3D printing