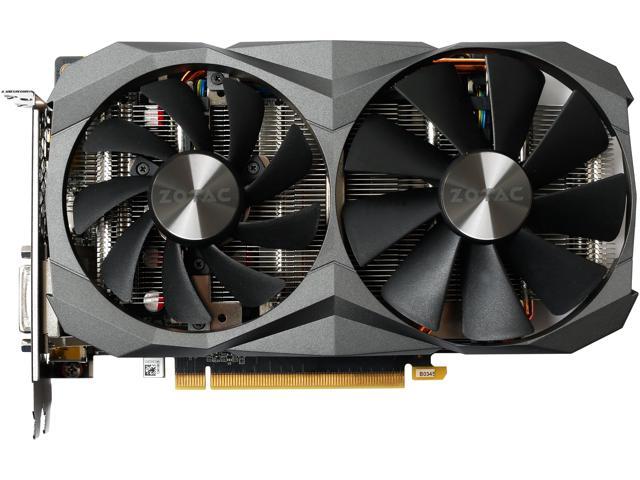 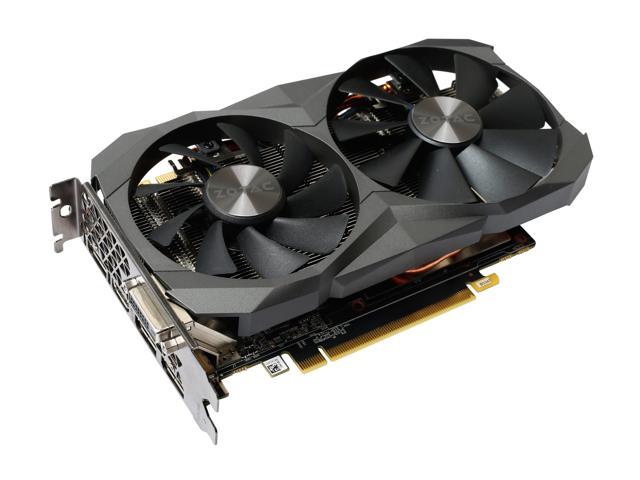 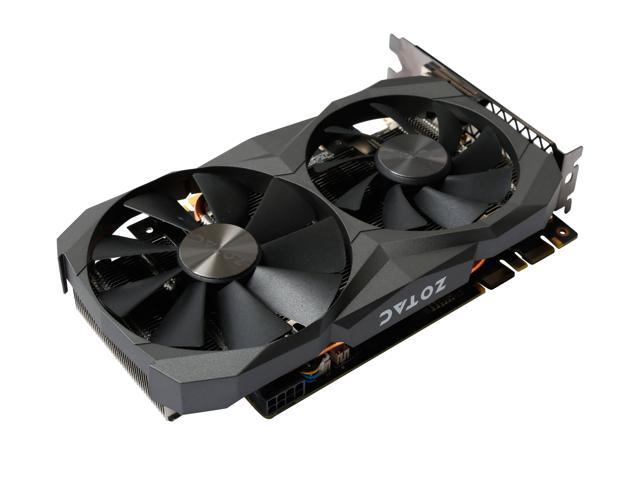 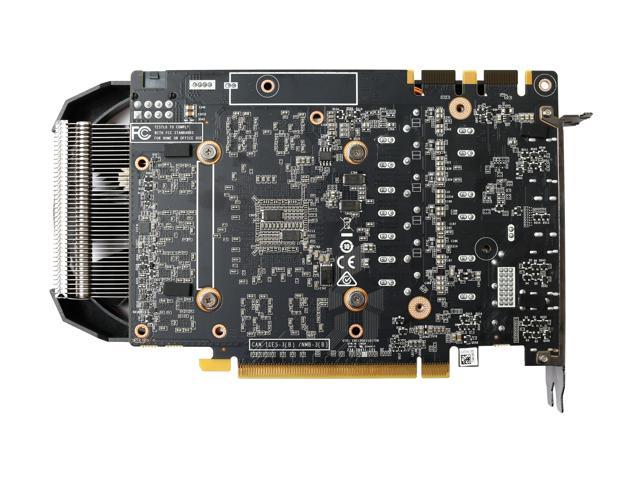 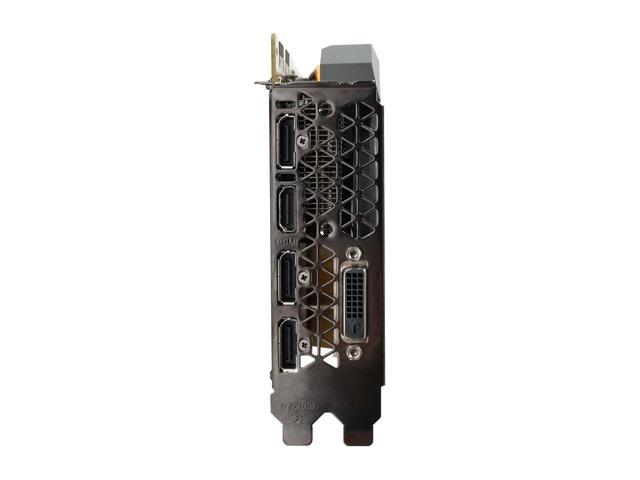 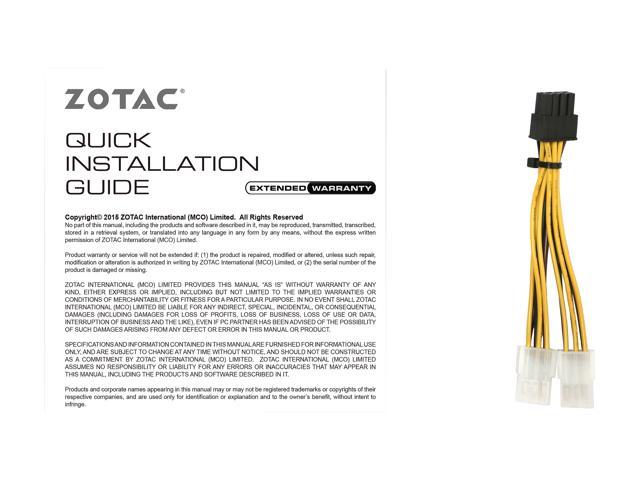 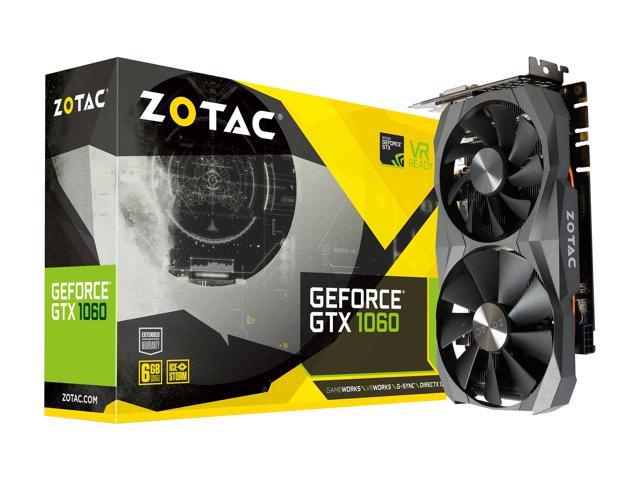 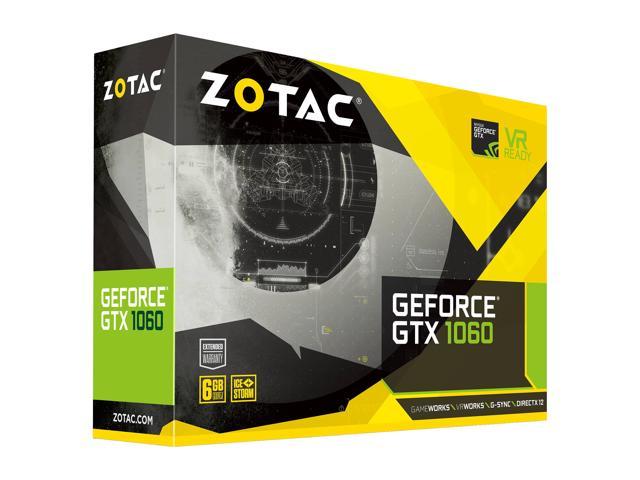 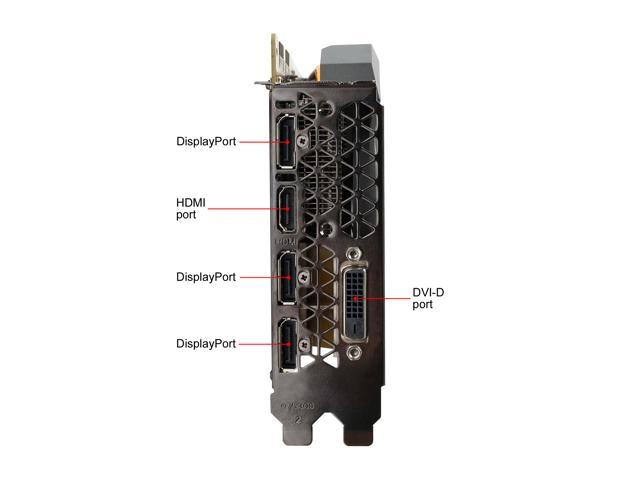 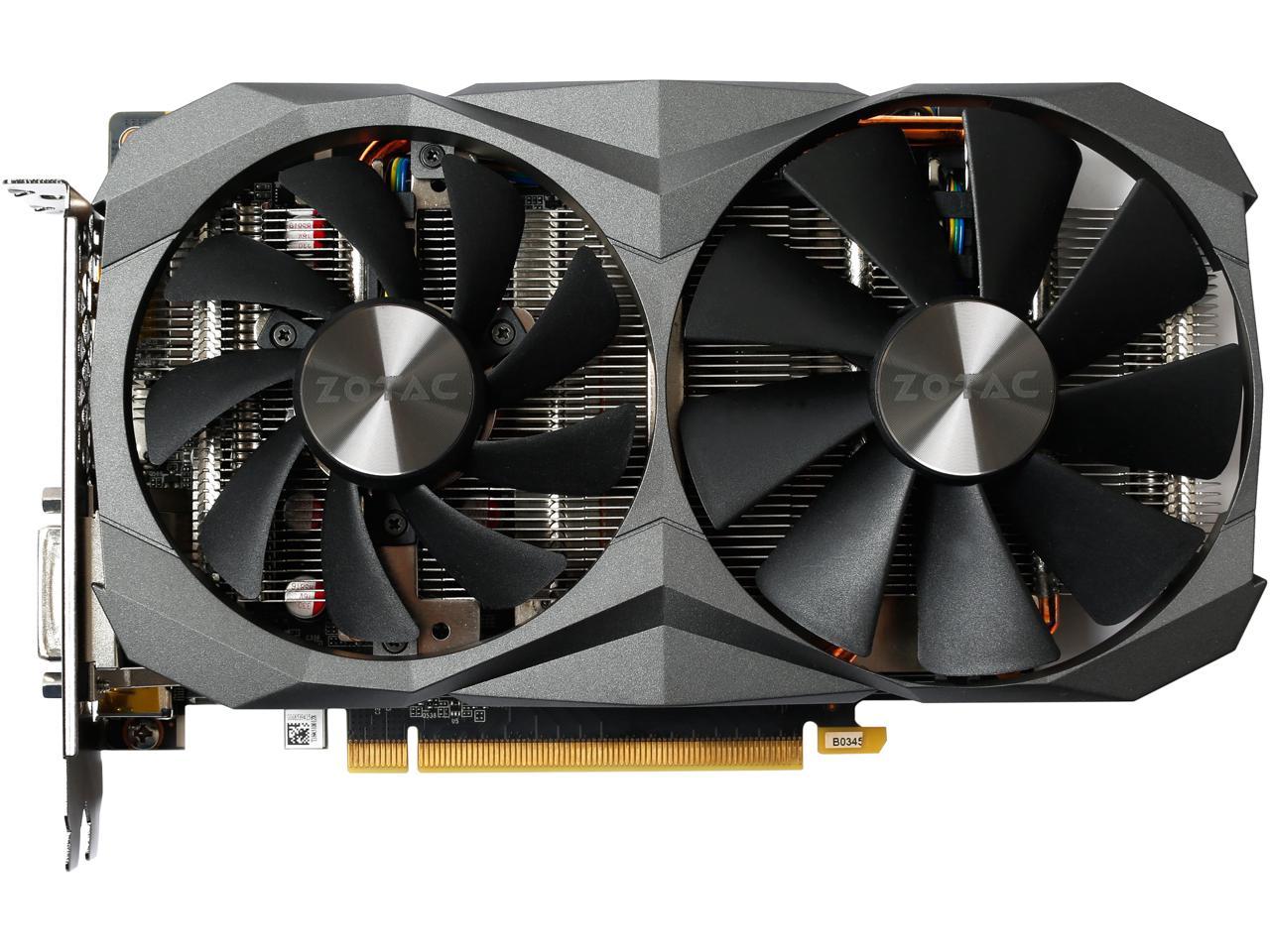 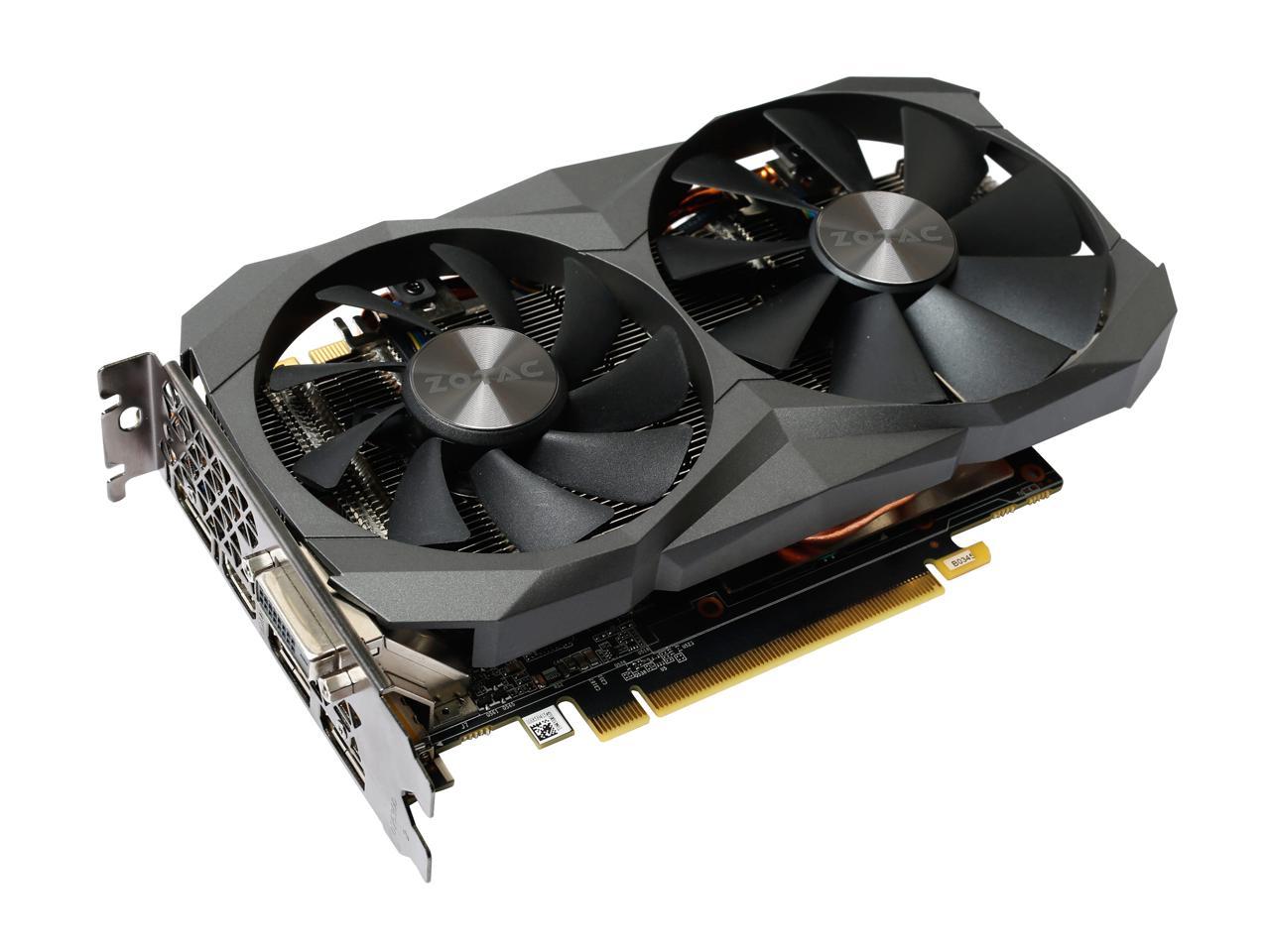 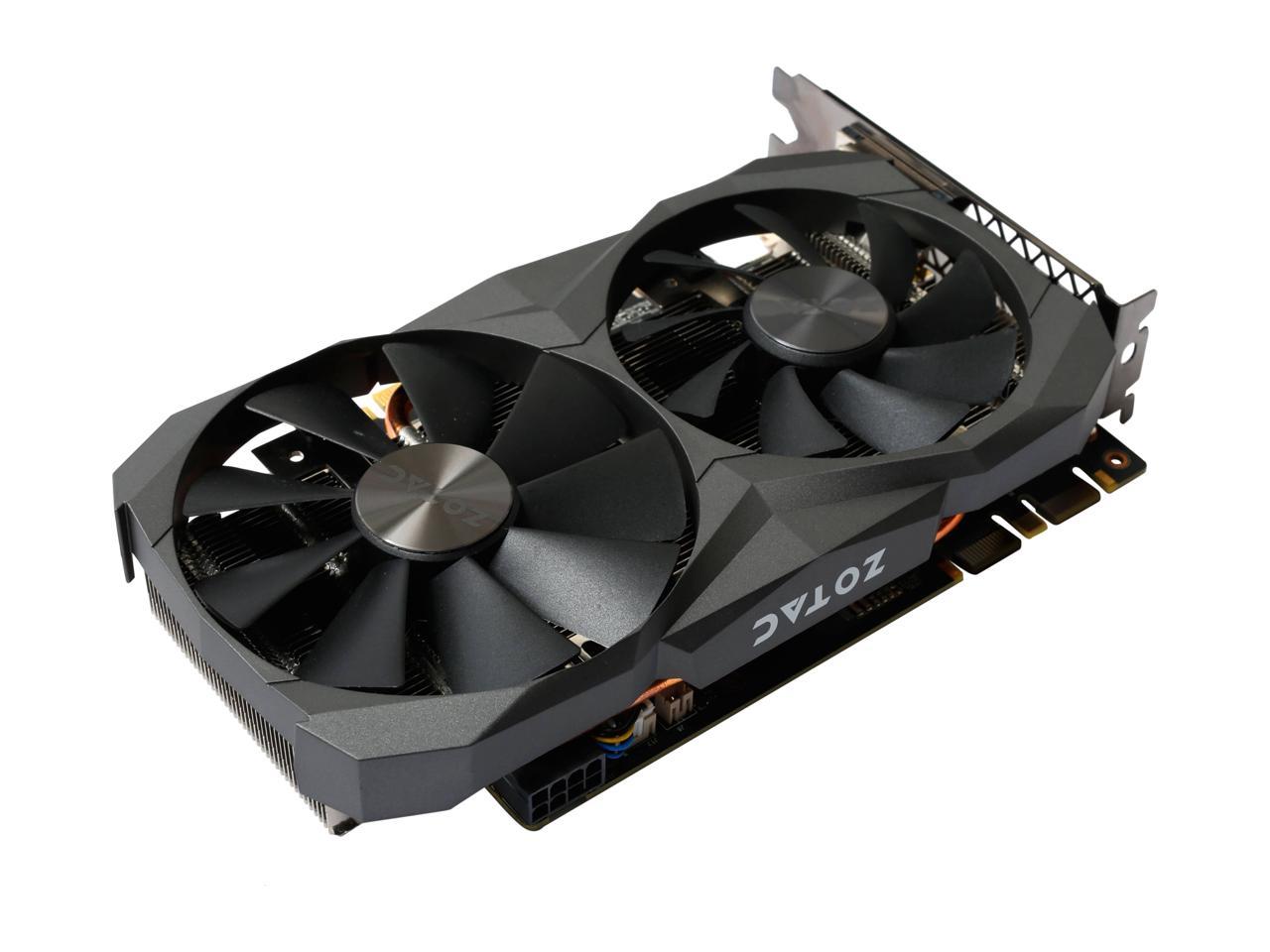 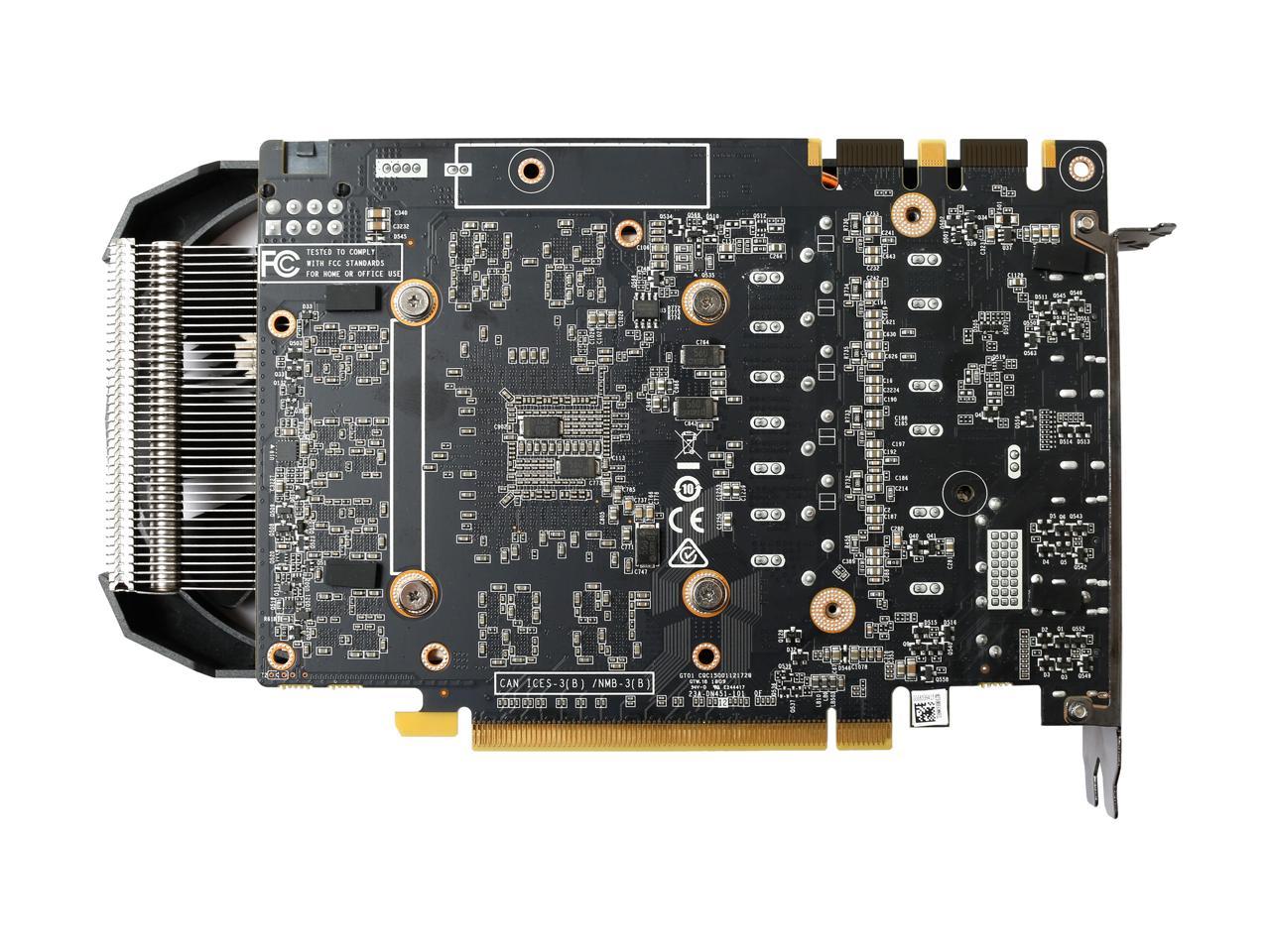 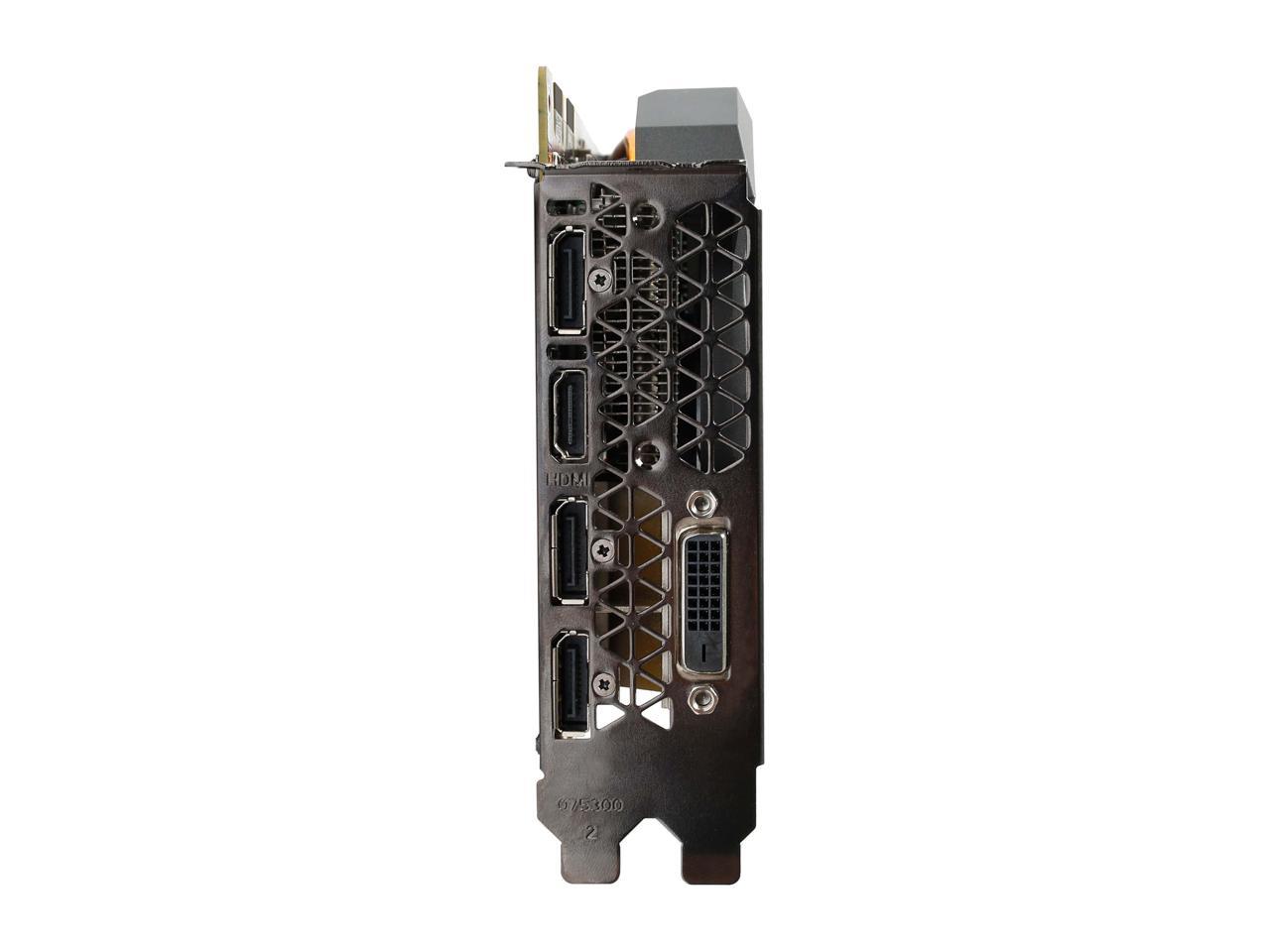 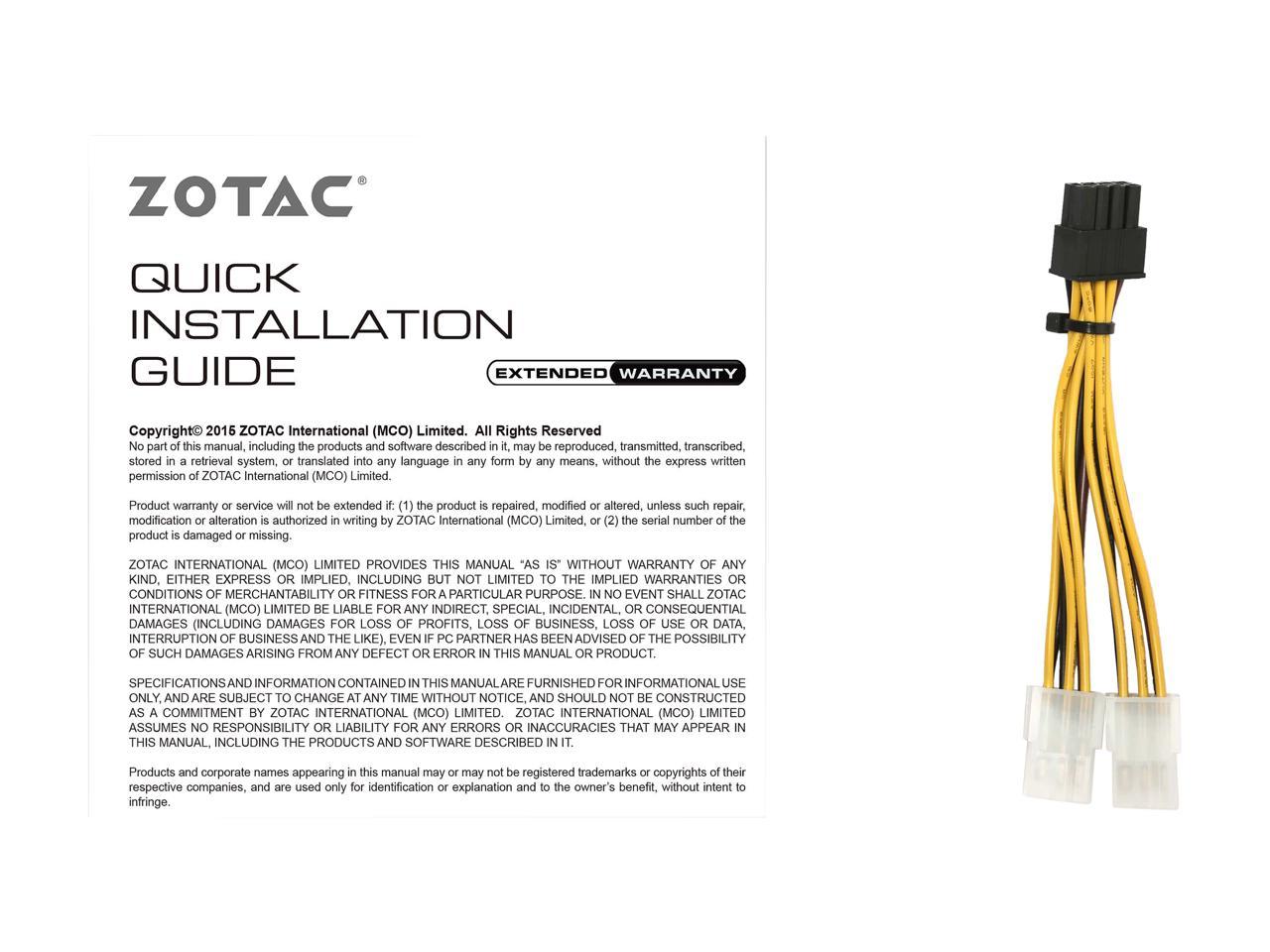 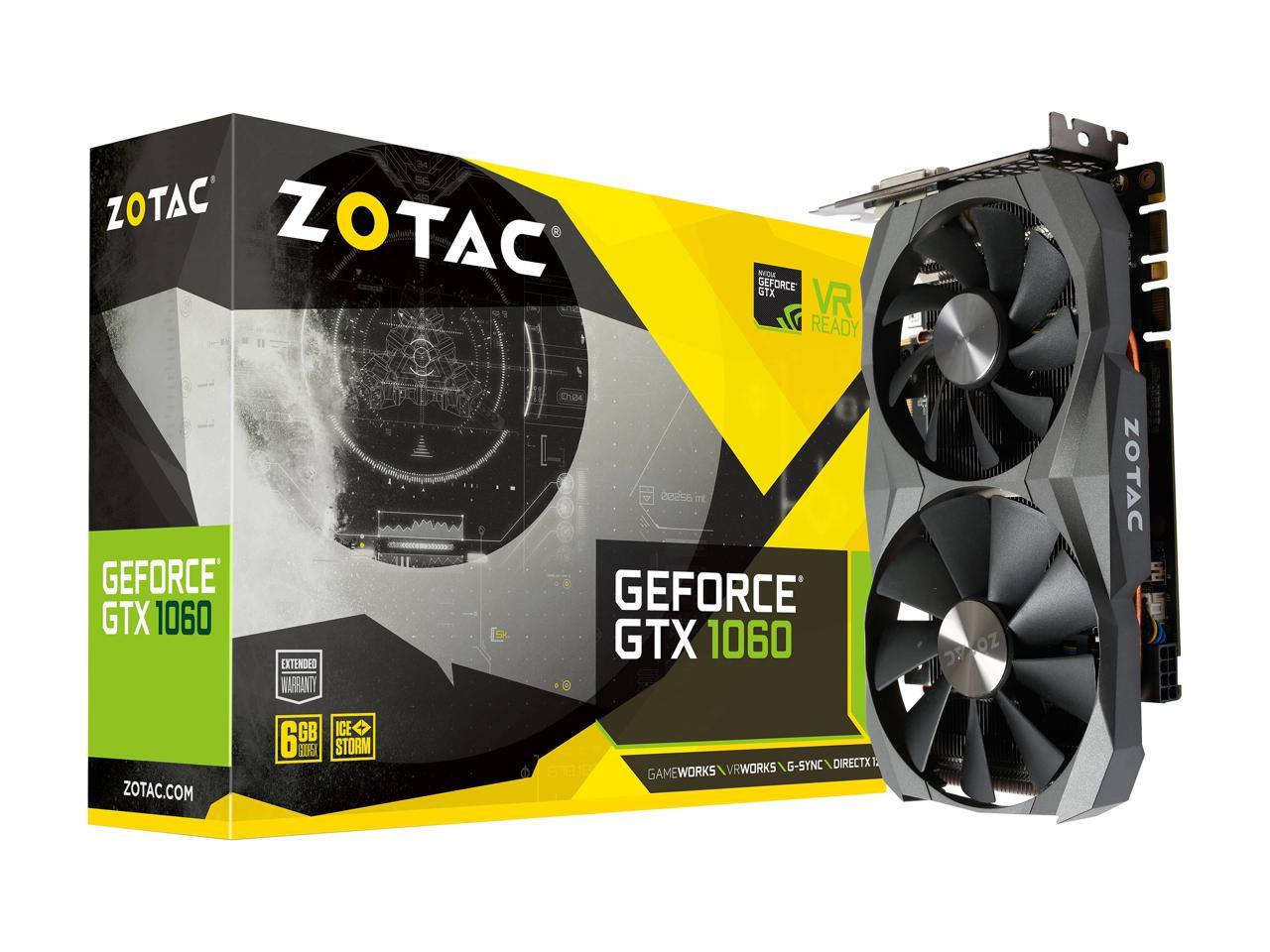 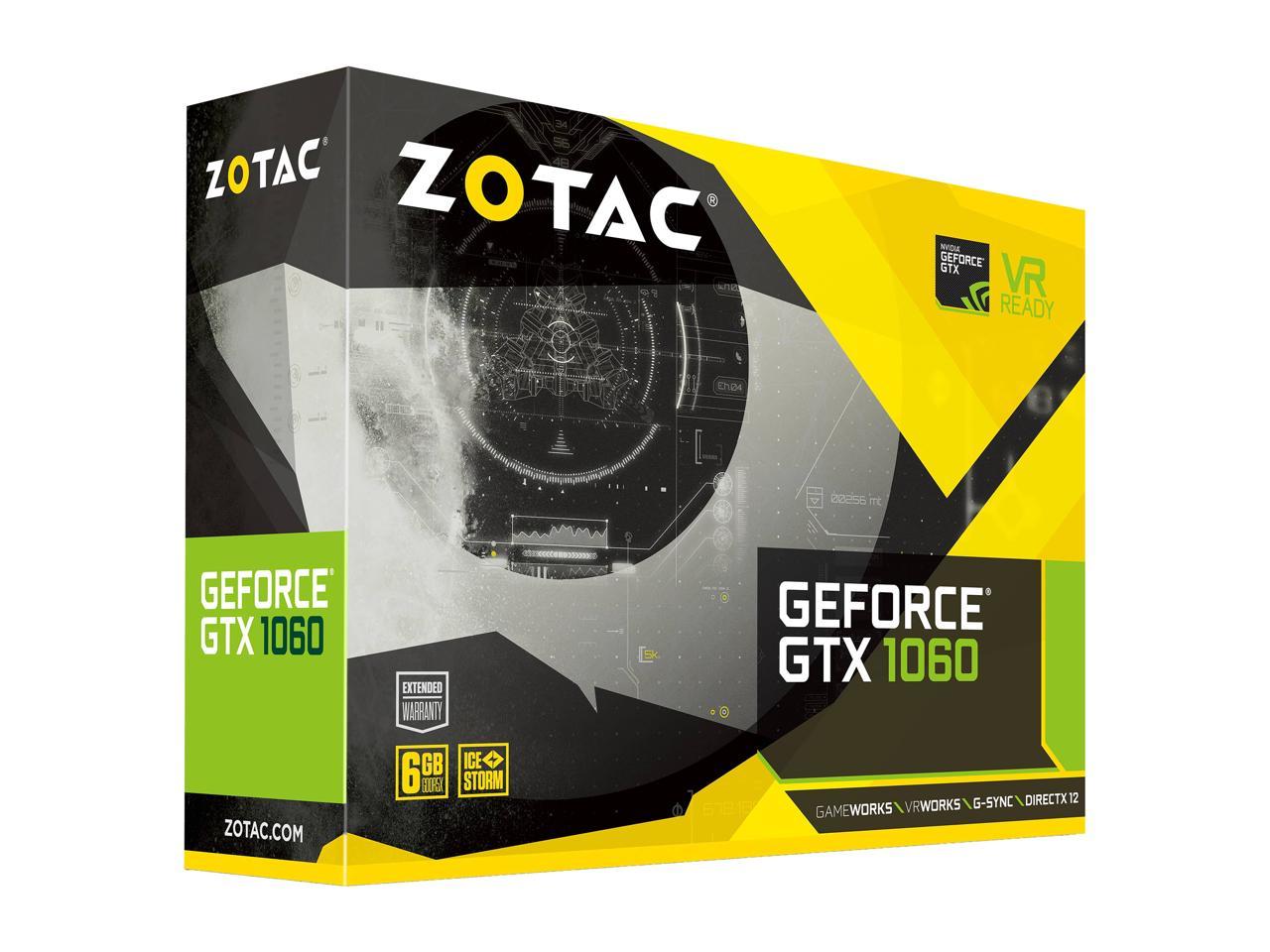 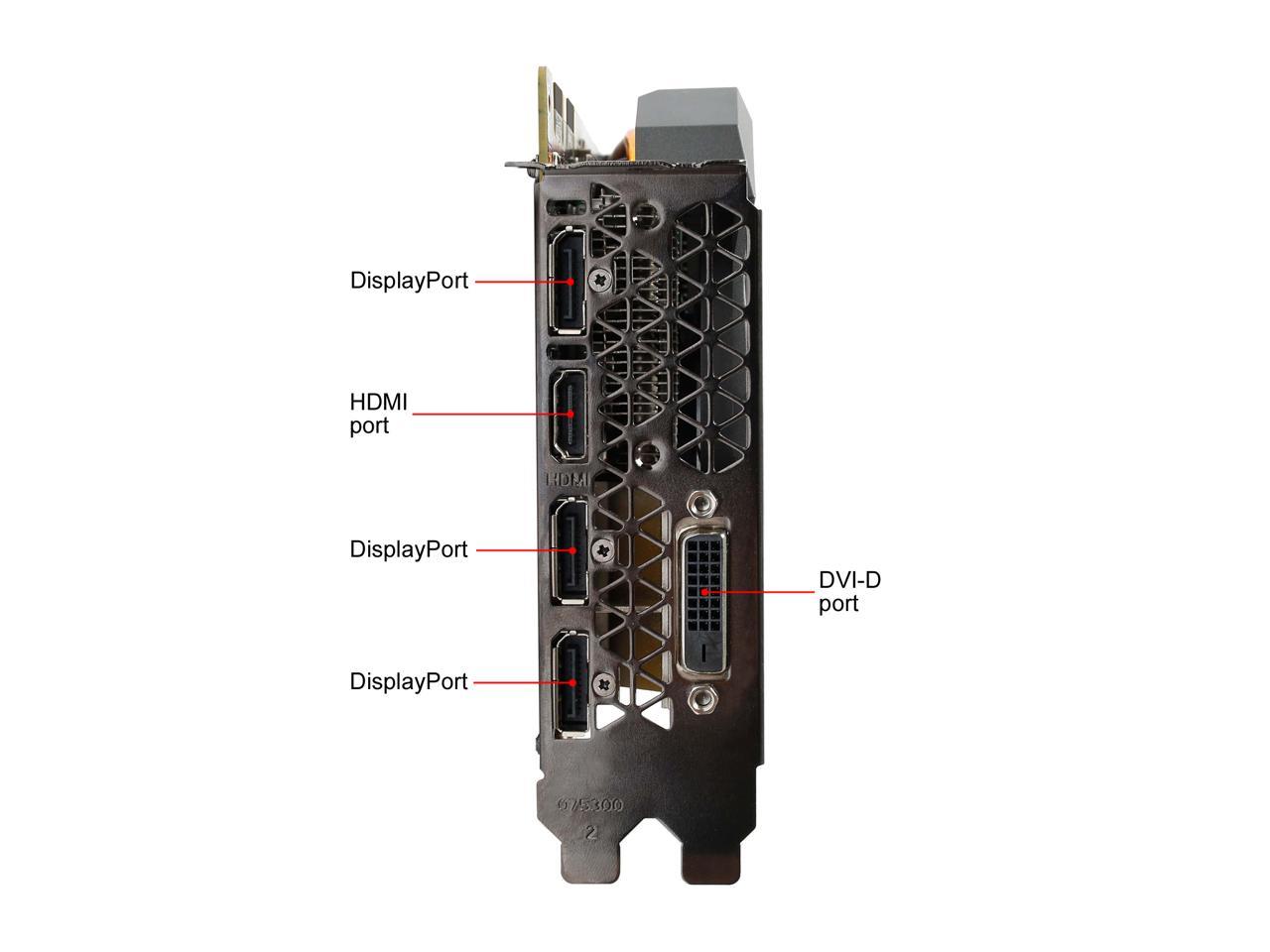 This ZOTAC ZT-P10620A-10M GeForce GTX 1060 6GB comes with dual large fans for efficient yet quiet cooling, and is built with superb components ensuring stability, reliability and durability you can count on in extreme gaming. Pascal is built to meet the demands of next generation displays, including VR, ultra-high-resolution, and multiple monitors. It features NVIDIA GameWorks technologies for extremely smooth gameplay and cinematic experiences. Plus, it includes revolutionary new 360-degree image capture. Ansel is a revolutionary new way to capture in-game shots and view in 360. Compose your screenshots from any position, adjust them with post-process filters, capture HDR images in high-fidelity formats, and share them in 360 degrees using your mobile phone, PC, or VR he1adset.

Redesigned from the ground up, extract every ounce of performance from your ZOTAC graphics card with FireStorm. Tweaking and tuning are quick and easy with an optimized user interface that presents users with clock speed adjustments, fan control, GPU monitoring functions, and much more.

Overall Review: For those who don't know, this is a cut down GTX 1080. Cut to the exact shader and Cuda core count of every other 1060. What this means: You're potentially getting an upgrade in the RAM department. I say potentially because the only way to see the benefits is to OC that RAM. Worst case scenario if you are uncomfortable overclocking is that you get a 6GB GTX 1060 with a great cooler attached. Stays cool and runs everything exactly as I need or expect it to. I plan on getting one more for my son soon.

Overall Review: Zotac cracked into highly competitive and overly supplied video card market to make its own name, it is best to distinguished itself with some unqiue features instead of following the pack. This shorter card with dual DP port are good start but if Zotac can make it more compact rather than focusing on head to head competition of the same kind against Gigabyte, Asus and MSI, it will make Zotac a better brand people can trust. Have a human responding 1800 service number and a friendly on line RMA web site will also boost the brand. It is unfortunate many of these manufacturers won't understand the mere advantage when comes to consumer impression.

Pros: - Great price - 6gb of GDDR5X memory , lots of room for overclocking. Only 1060 I've seen for sale with this type of memory. - Plays current games on ultra/high settings at 60fps @1080p

Cons: - None so far other than it is a plain looking card no lights or effects, but that's fine with me at this price.

Overall Review: I upgraded from a 1050ti and this thing blows it out of the water. I overclocked this card +450mhz on the memory and +190mhz on the GPU clock, which gave me a 4-6 fps increase from stock settings on the Unigine Supersition benchmark (1080p HIGH fps - min:32, avg: 51.61, max: 62.70) . I am now able to run PUBG on a mix of Ultra/high settings to achieve 60fps @1080p. I also tested it out on the Anthem Demo, it hovered around 50-75 fps on the High setting. The temps hover around 65c when under load, I don't have the best airflow so it would probably run cooler with some more case fans, etc. Overall very satisfied with performance.

Cons: -NONE YET with the graphics card. Been running it very hard for a couple weeks and it's been perfect. -My only somewhat complaint is the basic shipping, FedEx SmartPost kind of sucks, tracking wasn't updated for most of the time but it managed to get here the last possible day from estimated.

Overall Review: Switched from an old GTX 750 TI. I was worried about some sort of performance issues with my somewhat budget system. Second hand AMD FX 8350 and still on ddr3 ram. Also my system runs fairly hot so was concerned about how that would turn out. But it's been crazy good. So glad I made the switch. Well worth the price.

Pros: Got it for $199 + Monster Hunter and some Fortnite stuff. Steller deal. Would still pay the original $229 if I had to. Performance is really good. 23 FPS better than my 3GB EVGA 1060 in Cinebench and supposedly 5-8 FPS better than my friend's 1060 with normal GDDR5. I'll have to play some games to see real performance, which I'm sure is still about as good. Came in a Newegg box + retail (Way better than "another website" sending me a RX 580 in retail packaging), which I'm guessing is the standard as this is my first time shopping here. Was smaller than I expected, which helped in my micro-ATX case.

Cons: Sadly no GTX 1060 sticker provided so you can decorate your case (Not really necessary)

Pros: -Runs really cool (as in temperature wise) -Great performance for what you pay for -Because of how small this card is it was super easy to install and cable manage -Was quite surprised at how quiet this card runs Iv never bought a Zotac card before because from what iv heard people say about them but honestly the quality if this card is really good i dont know what issues other people have had but the card runs and looks amazing ill definitely be buying more zotac cards in the future

Cons: -The packaging is a little subpar (im use to EVGA's foam packaging) -I wish this came with a back plate -See "other"

Overall Review: I originally bought this card on april, 22, 2019 and still didn't recive it by may 4th so i ended up phoning Newegg support and asked what was going on and they said it probably got lost in the mail and was told the latest i should have received it was May 1st . I have to hand it to newegg they made making a claim super easy i was offered either a refund or a replacement and i of course took the replacement. Losing this card in the mail was in now way Newegg's fault i thought i'd just share the amazing costumer service experience i had with them

Pros: -DDR5X memory comes clocked low, but easily overclocks 40-50%, as it is micron specced at 10Mbps -GP104 GPU (1080 partially disabled) allows for ddr5x and clocks easily to 2000mhz (2050mhz for me with no power target or voltage changes -VR: This GPU is fast enough to run every VR game I own smoothly and without any dropped frames (that i've noticed) -Runs AAA titles at high or ultra settings over 60fps (examples: Far Cry 5; Resident Evil 2; Monster Hunter World) -Very power efficient, pulling around 120w max at default settings. This card replaced an r9 390, performs almost 100% the same, yet the 390 used 2-3 times the electricity. -Temps are very low, I've not seen it over 62c overclocked to 2050mhz

Cons: - No backplate or accent/RGB lighting. Not really a con, just a note for those who want a showcase/pretty to look at PC

Overall Review: -If I had the available cash at the time, I would have spent the extra ~$80 for the 1660 ti, simply for the ~33% higher performance, about equal to a gtx 1070. -Is about equal in performance to an rx580 8GB, and I would recommend, if you're choosing between the two, picking the card that performs better in the games YOU play -10 Series Nvidia GPUs are great but are about 3 years old now; if you can find or afford a 20-series GPU within your budget, it will likely be the better purchase in the long run, especially with new games that release with support for the new features of the 20 series.

Pros: Plugs and plays easy booted right up. Plays all my games at max or almost max settings at 60fps or higher.

Overall Review: I was using a 750ti before this card it was like hitting the hd switch.