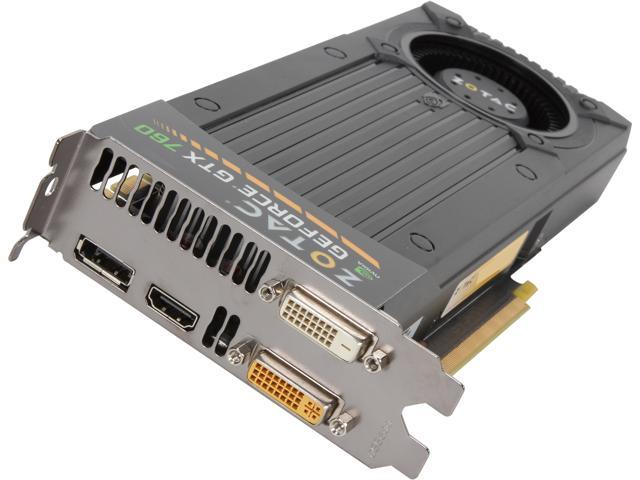 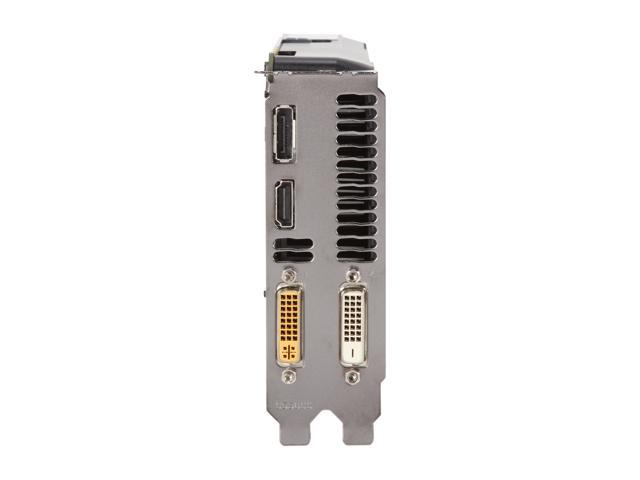 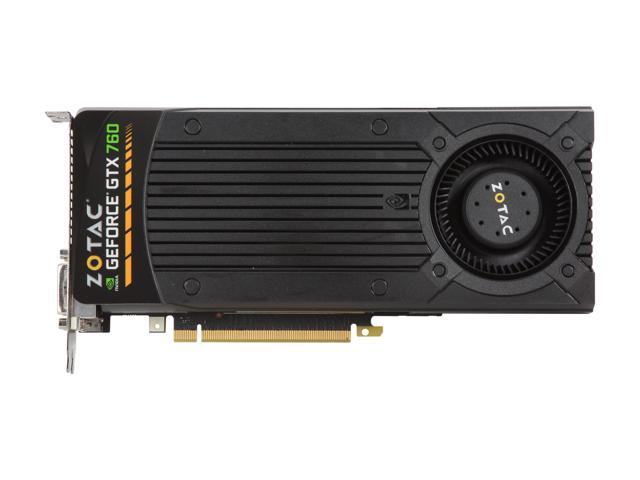 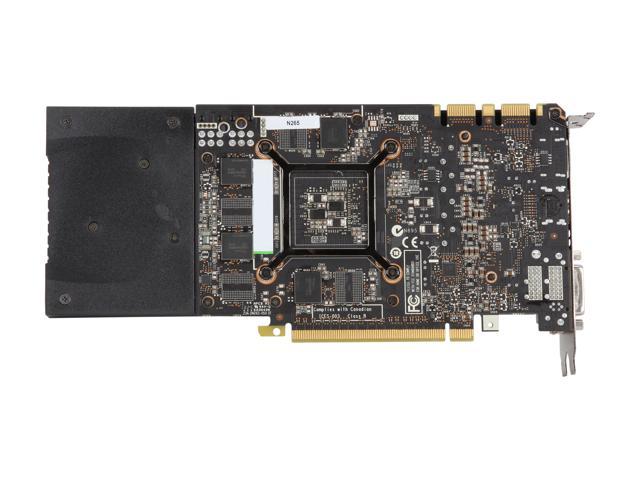 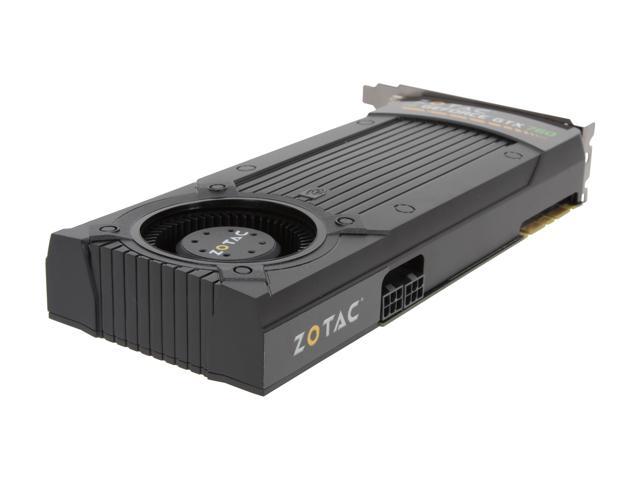 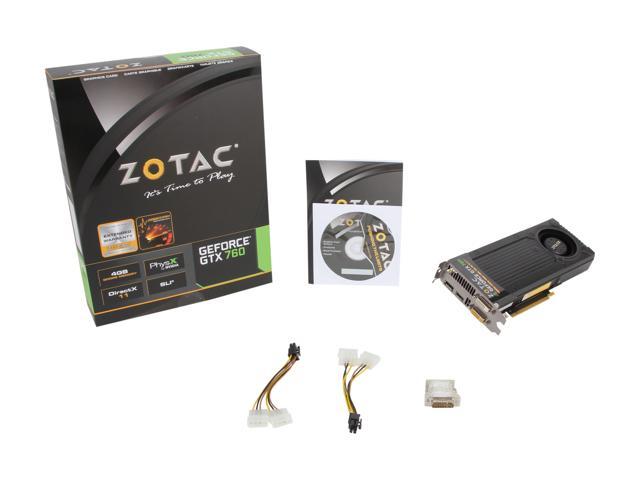 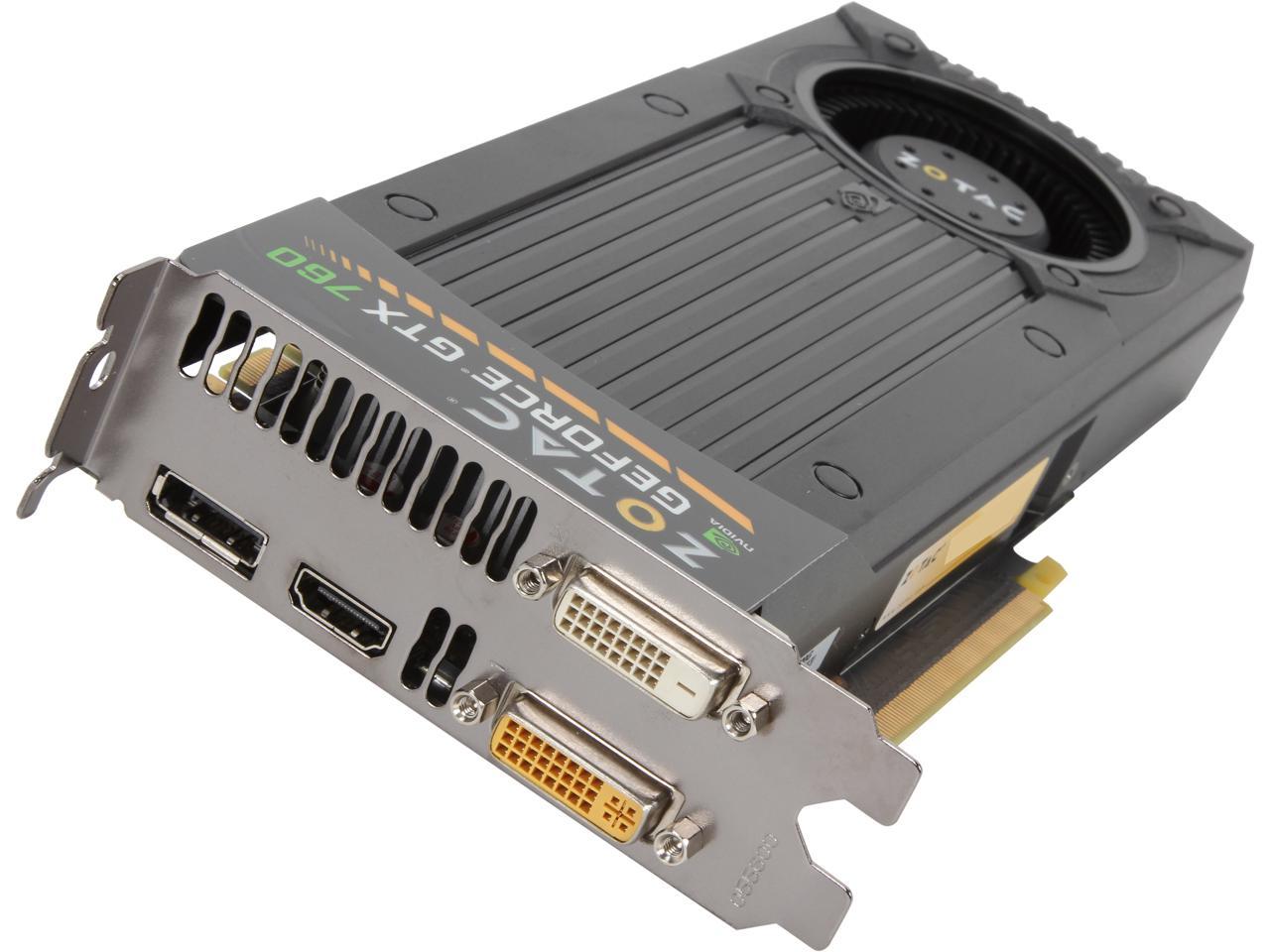 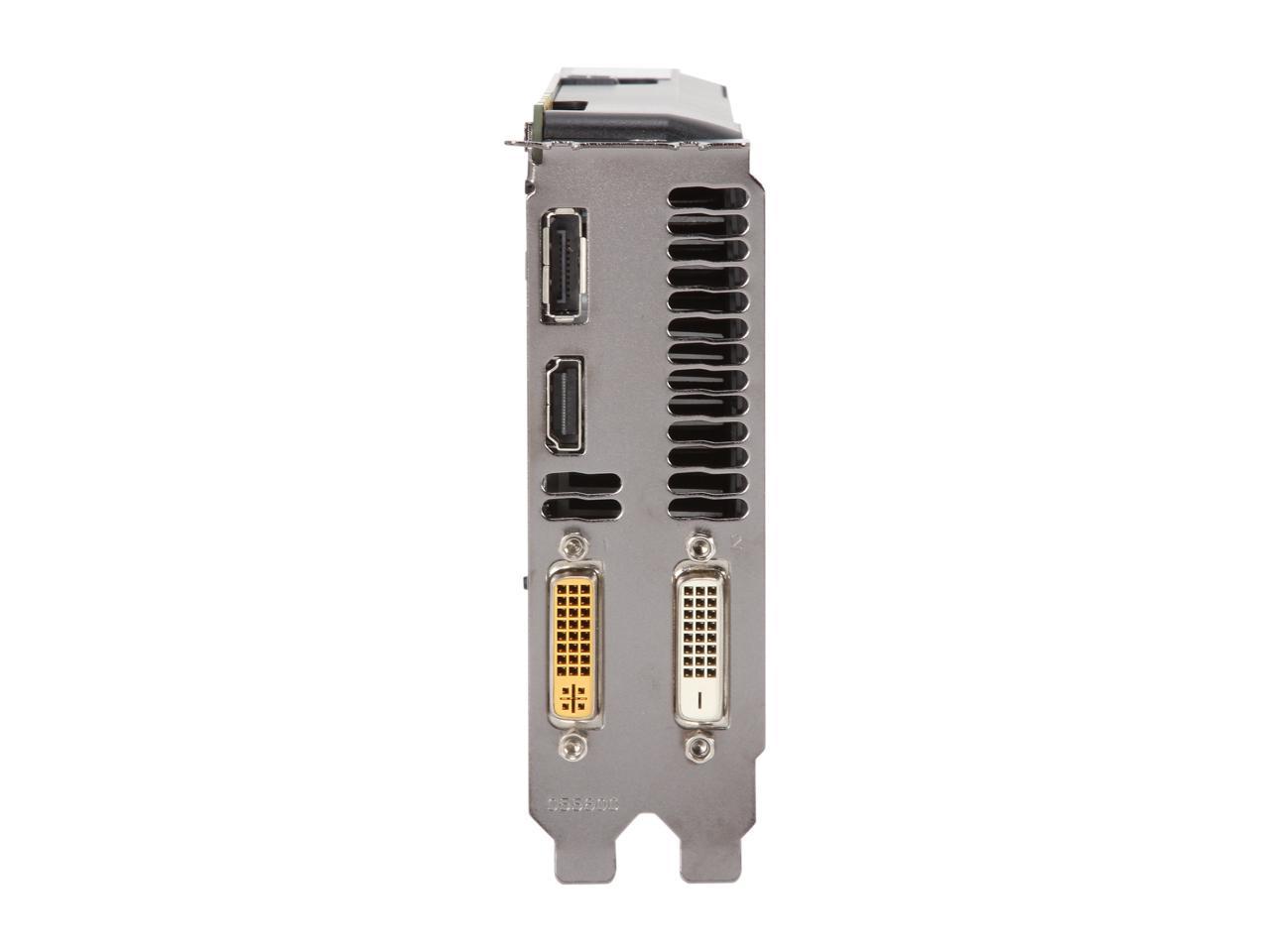 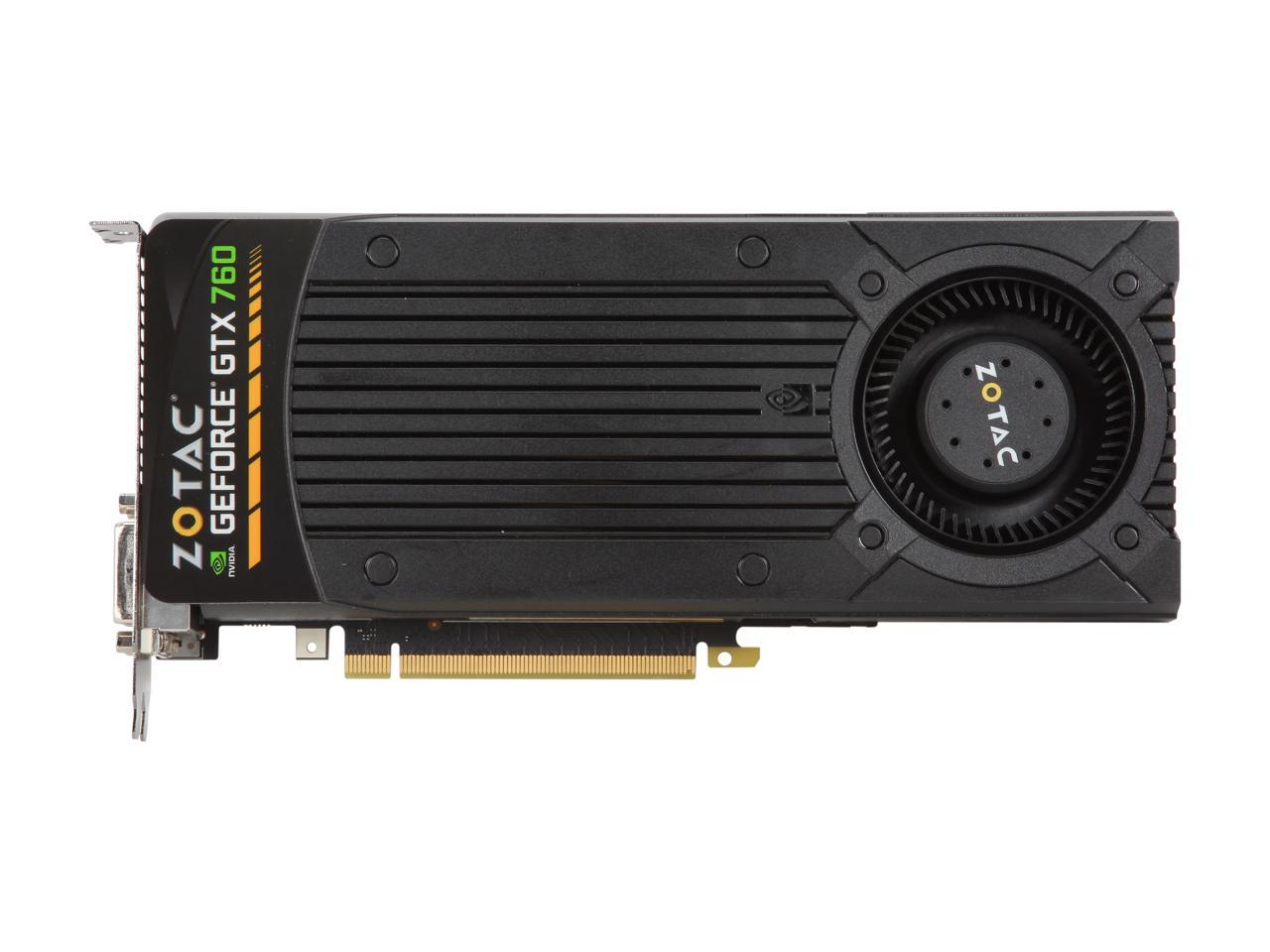 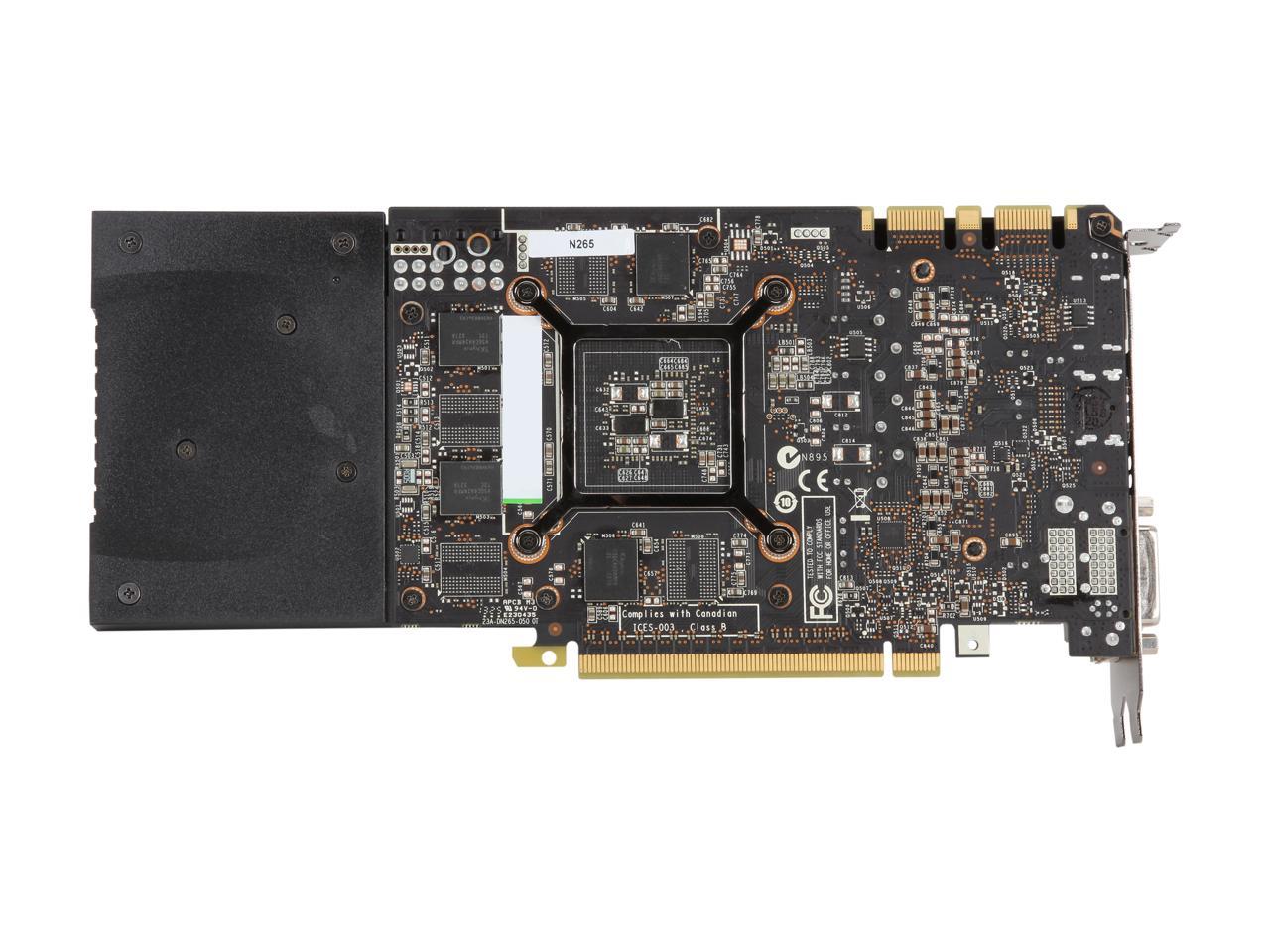 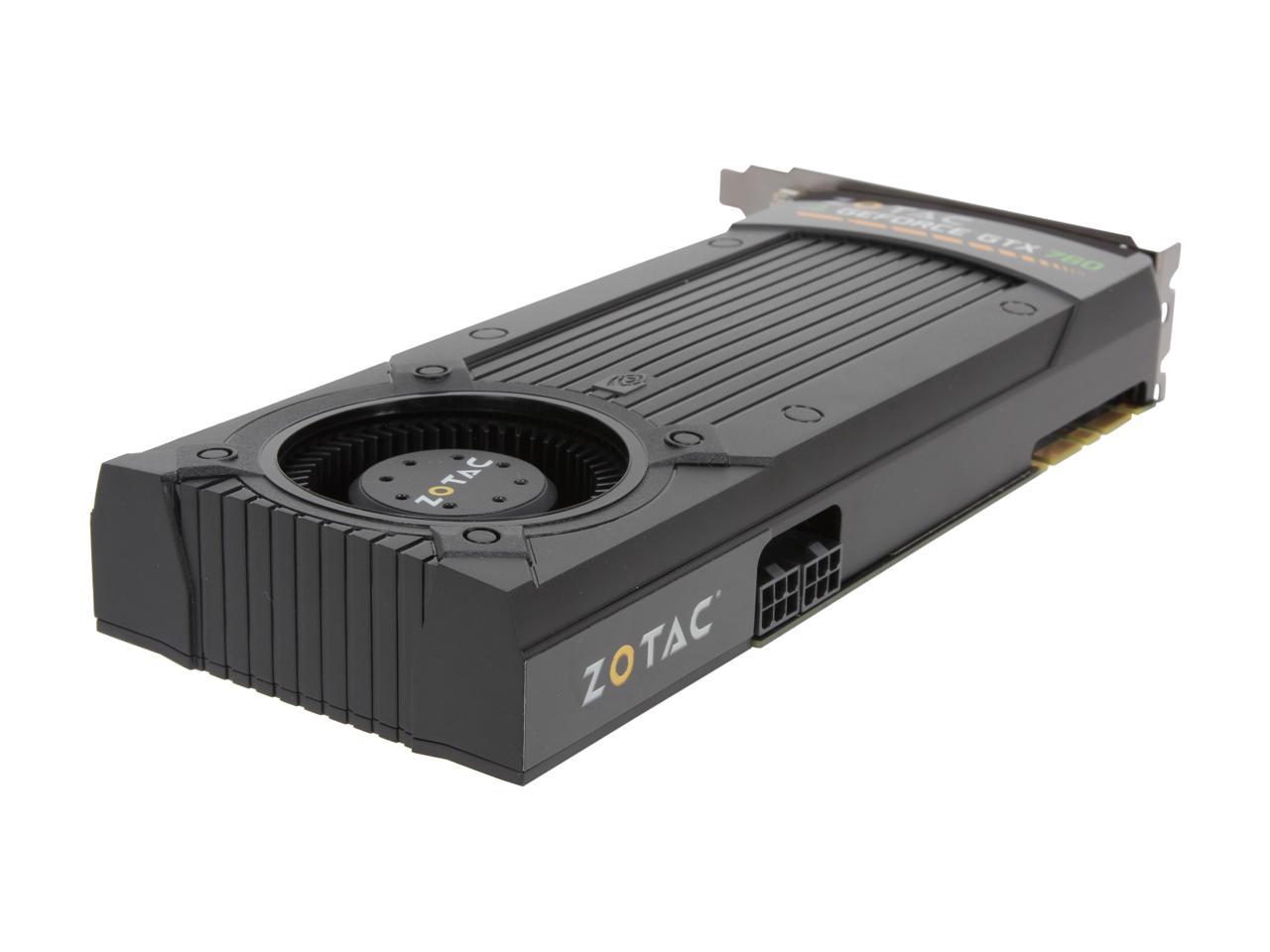 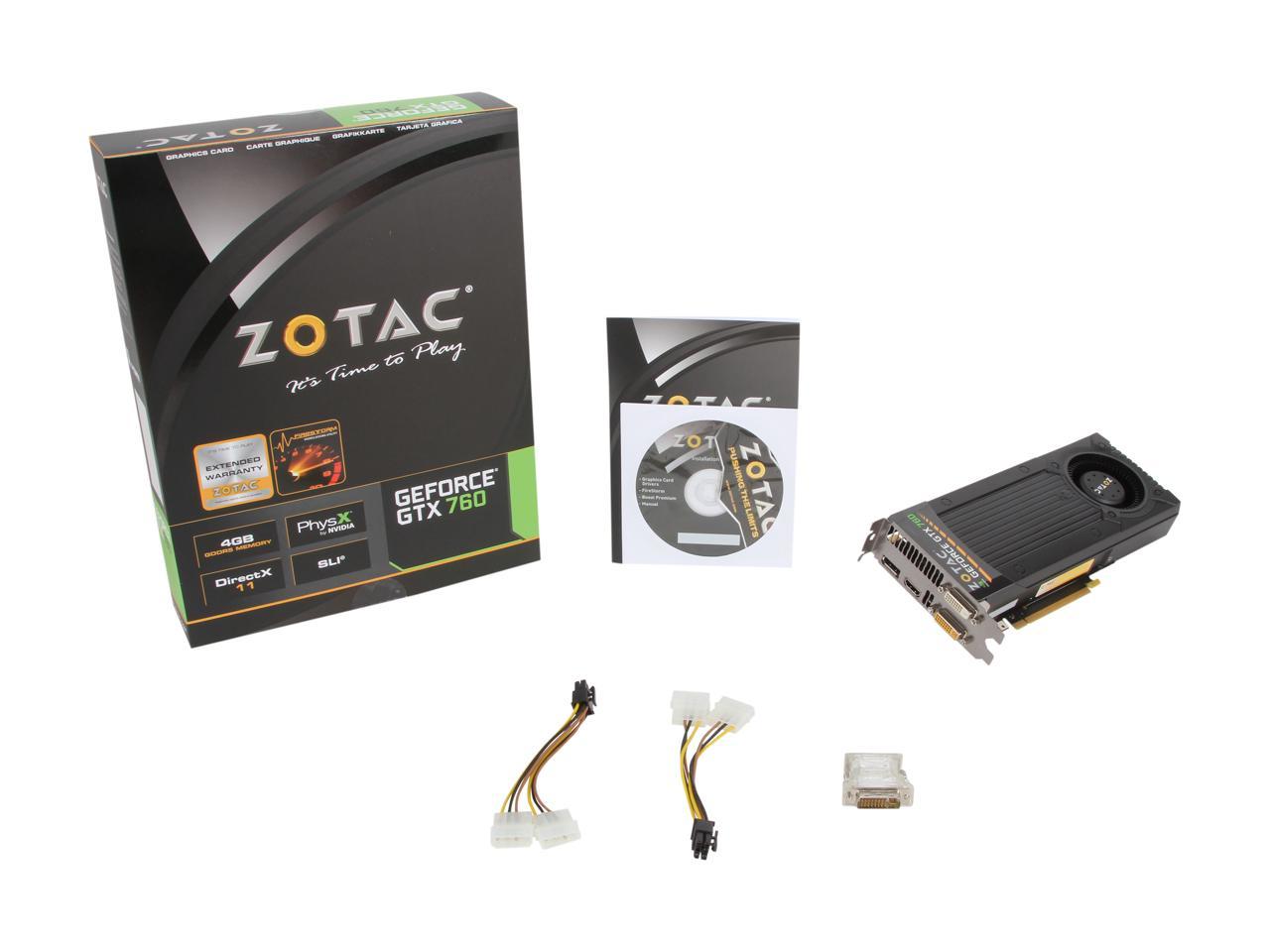 A new addition to the GeForce 700 series lineup, the ZOTAC GeForce GTX 760 4GB is a serious piece of equipment for a serious gamer. Built on the highly-acclaimed NVIDIA 28nm Kepler architecture, the ZOTAC GeForce GTX 760 4GB boasts game-changing performance and advanced gaming technologies; giving the performance edge you need to game at high settings and resolutions.

Pros: These cards run everything I can throw at them right now. I'm not gaming at 2560x1440 at the moment but at 1080p these cards are quiet and overkill. Metro last light no problem @ max settings. 2 of these are a bargain with 4GB of ram compared to competitive models. Software allows for over clocking.

Cons: The branding is upside down?

Overall Review: I took a chance on these because they were cheaper. Happy I did. I'm still running an i7 920 Bloomfield with pci 2.0 and am very happy with this upgrade over a new mobo/CPU combo and running on my previous GTX 560 FTW.

Pros: This is a GTX 760, Zotac does nothing to take away from that. This is very obviously a reference card, with the reference cooler, a lot of reviewers complain about this but must not understand the benefits of this cooler design. Centrifugal fans are GREAT for one thing: blowing all of their hot air out of your case, someone with a HAF 932 or an Obsidian 800D doesn't care, but I have a Lian Li PC-TU200 I want every little bit of heat outside my case. Toms hardware calls this the best Centrifugal fan they have ever tested.... Finally this is a 4GB card, not everyone needs or wants the doubled memory, but I like to mod skyrim and the extra memory will help it age more gracefully. This card might find itself in a SLI setup where 2GB would be a bottleneck for 2 760s in some situations, particularly gaming at 4K resolutions.

Cons: Honestly I cant think of one.... Its not factory overclocked? I can do that myself . So many companies have them that the chips must be coming out better than Nvidia expected Its made by Zotac? Whatever

Overall Review: If you don't mind a card that blows hot air in your case don't pick this card. Or if you want the best overclocking experience (which is water cooling and not air in the first place) then this card isn't for you. But those things don't make this a bad card

Pros: I got a nice performance boost on my desktop with this upgrade. Install was straight forward and easy.

Cons: Card was DOA on arrival and I had to pay for return shipping. Fortunately new card works and the exchange process with newegg was straight forward and without issue.

Cons: Runs a little hot as the fans are not that great (obviously not a con if you have a water cooled system). Fans can be a bit loud. Doesn't come with an sli bridge. Is a cheap $2 cable that much to ask for? Takes a bit more power than you would think. So make sure you have at least a 600w psu. I had to swap out my antec 550w to use just one card. I got an 850w one because I knew I would eventually go to sli (which I did about 2 months ago). However, I am on an older i7 (920) which is a bit more power hungry than new processors. I would research as much as you can to verify that your psu does have enough umphhh.

Overall Review: Awesome card for the price (I got mine when they were $200). If it had better fans it would give this card 5 eggs without hesitation. As it is, 4 eggs.

Cons: this is only an opinion but i don't like the super shiny plastic stickers that say zotac.. they should be matte like the rest of the card

Overall Review: instructions weren't clear, got my **** stuck in the fan

Pros: Upgraded from Zotac's GTX 280 AMP! edition. Newer games see a noticeable improvement, especially with the newer DirectX 11 features and such. Anything that needs lots of shader power is much better now. Screen Resolution: 1680 X 1050 Battlefield 3- Maxed out plays smooth Battlefield 4- Med-Max settings, plays smooth but FPS dips to around 2 every so often (probably a fault of my system RAM though, see other) Pretty much all other games I have are now maxed out if they weren't before (a testament to the mighty GTX 280!)- Skyrim, Metro 2033, Tomb Raider...

Cons: Coming from a GTX 280 is not that big of a leap in some games. Mostly DirectX 9 games fall in this category.

Pros: Incredible price for a 4GB card. The GTX 760 is currently rated by Tom's Hardware as best bang for the buck, and for the same price as the card they recommended, this comes with 4GB instead of 2!

Cons: Zotac...never heard of them before. I'm sure they make great stuff, but to me it sounds like a no-name budget brand.

Overall Review: I'm glad I took a risk on this card. Seems to work just great. I'll update this if anything adverse comes up

Cons: There are only two issues with this card: 1. Fan noise...yes as others have reported under heavy loads the fan ramps up...its not what I would consider super loud...but at low speaker levels you will notice it...if you wear head phones I don't think you will notice it...I plan on using a water block so it's not a issue with me. 2. Coil Whine...many individual report that the GTX 7 and 8 series of GPU have coil whine issues...under normal loads (email, streaming, etc) this card is quite...but under heavy loads such as benchmarking there is a coil whine. Unigine Heaven and Valley produced no whine...in Tropics I could hear a faint whine that under low speaker levels could be heard...in Sanctuary there was a very clear whine from the card. And, under Windows Experience Index during the card produced a very loud whine something like a stuck pig!!! I found that if you kept the FPS to under 200 the card would make little or no whine.....but I see other have found that even at 60 FPS some card make a loud whine....paying almost $300 for a card seems a bit much to have a card make a noise so loud that you can hear it over most of the other equipment in your system...so why are the manufactures not saying anything about this????

Overall Review: Great card but...with the coil whine.....I was going to get another card for SLI but I need to rethink this if most of the cards being made also suffer from this issue..