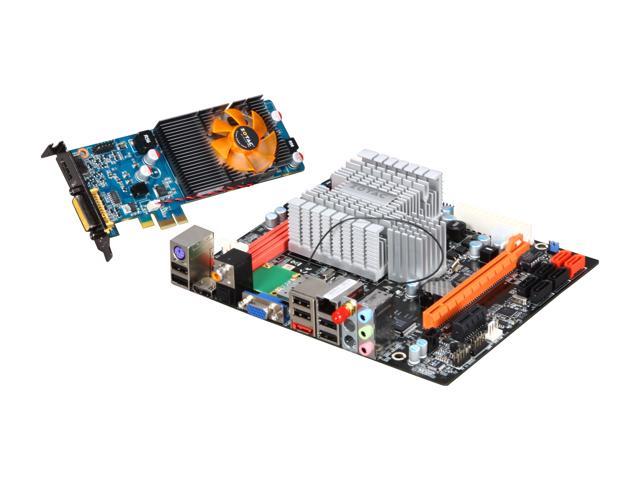 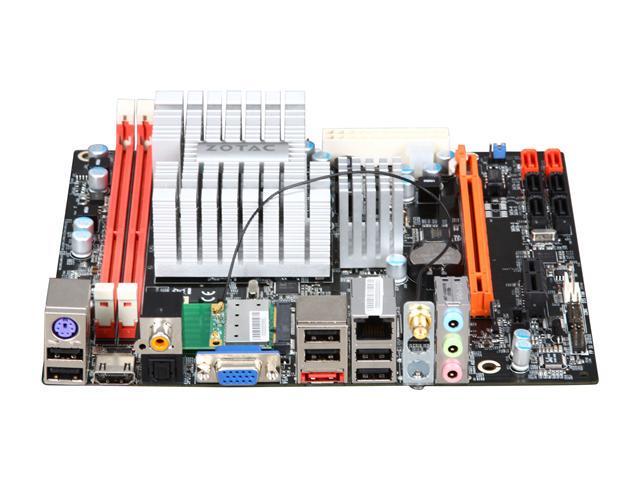 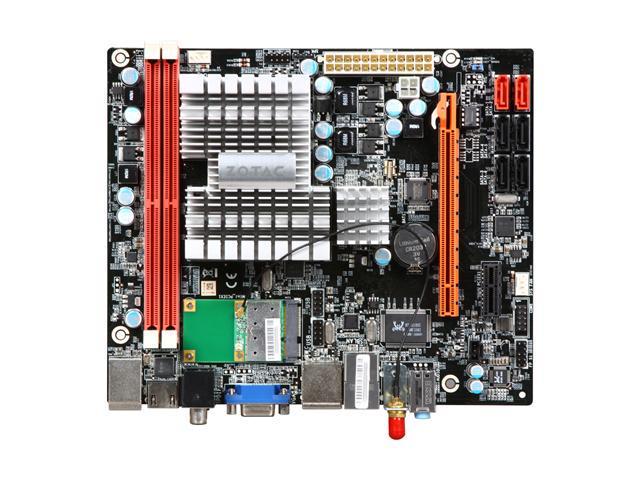 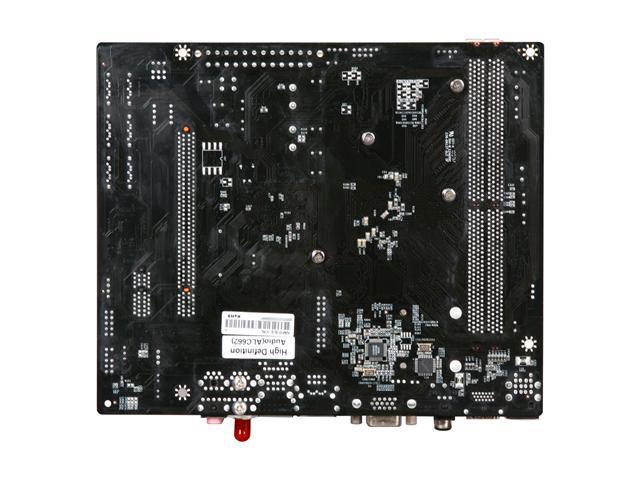 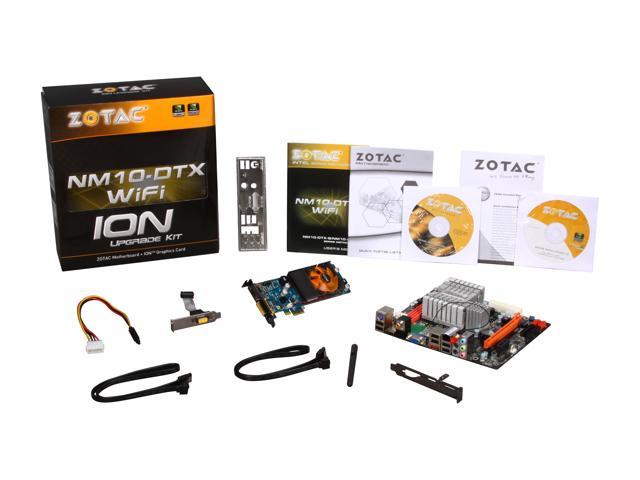 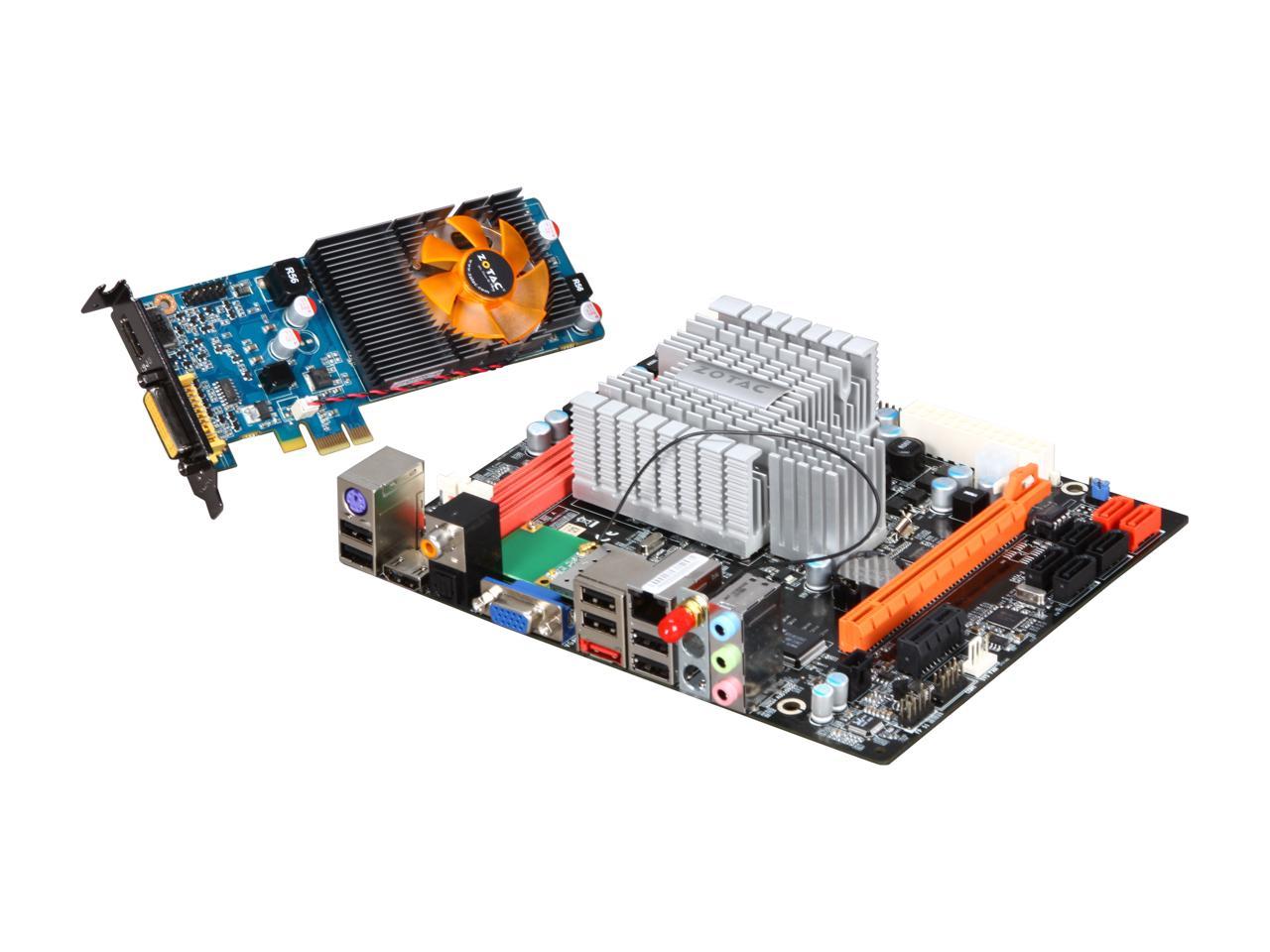 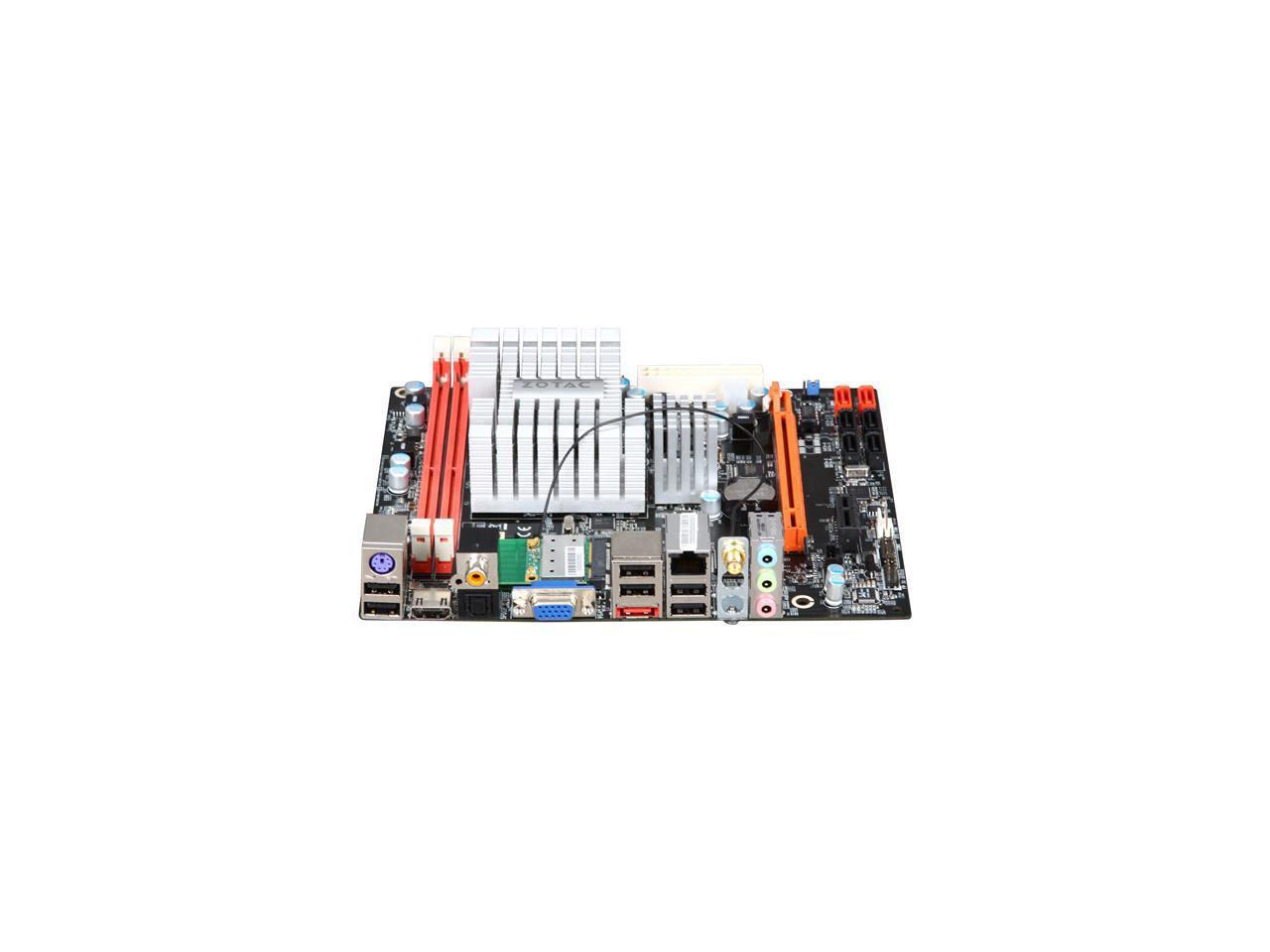 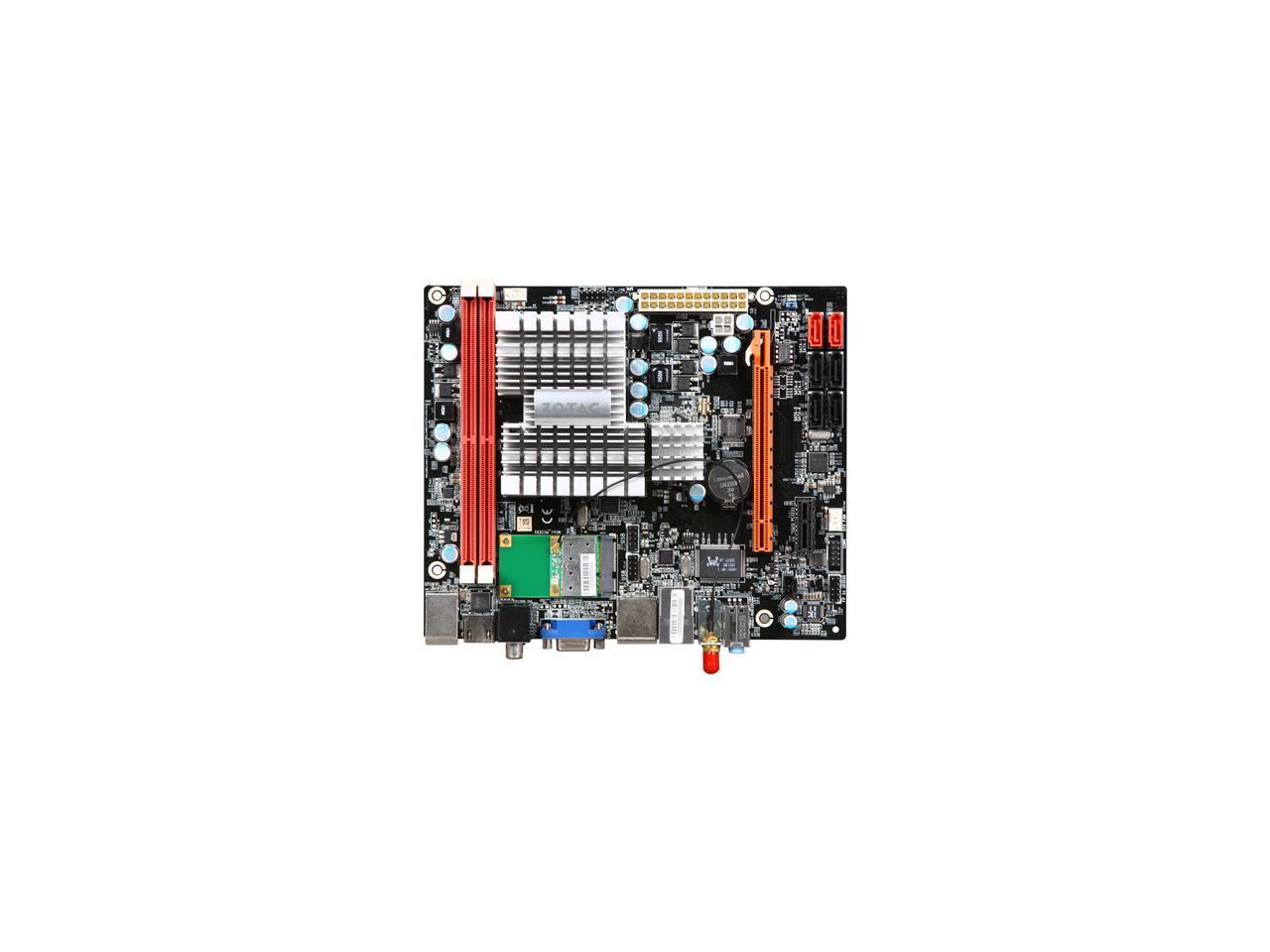 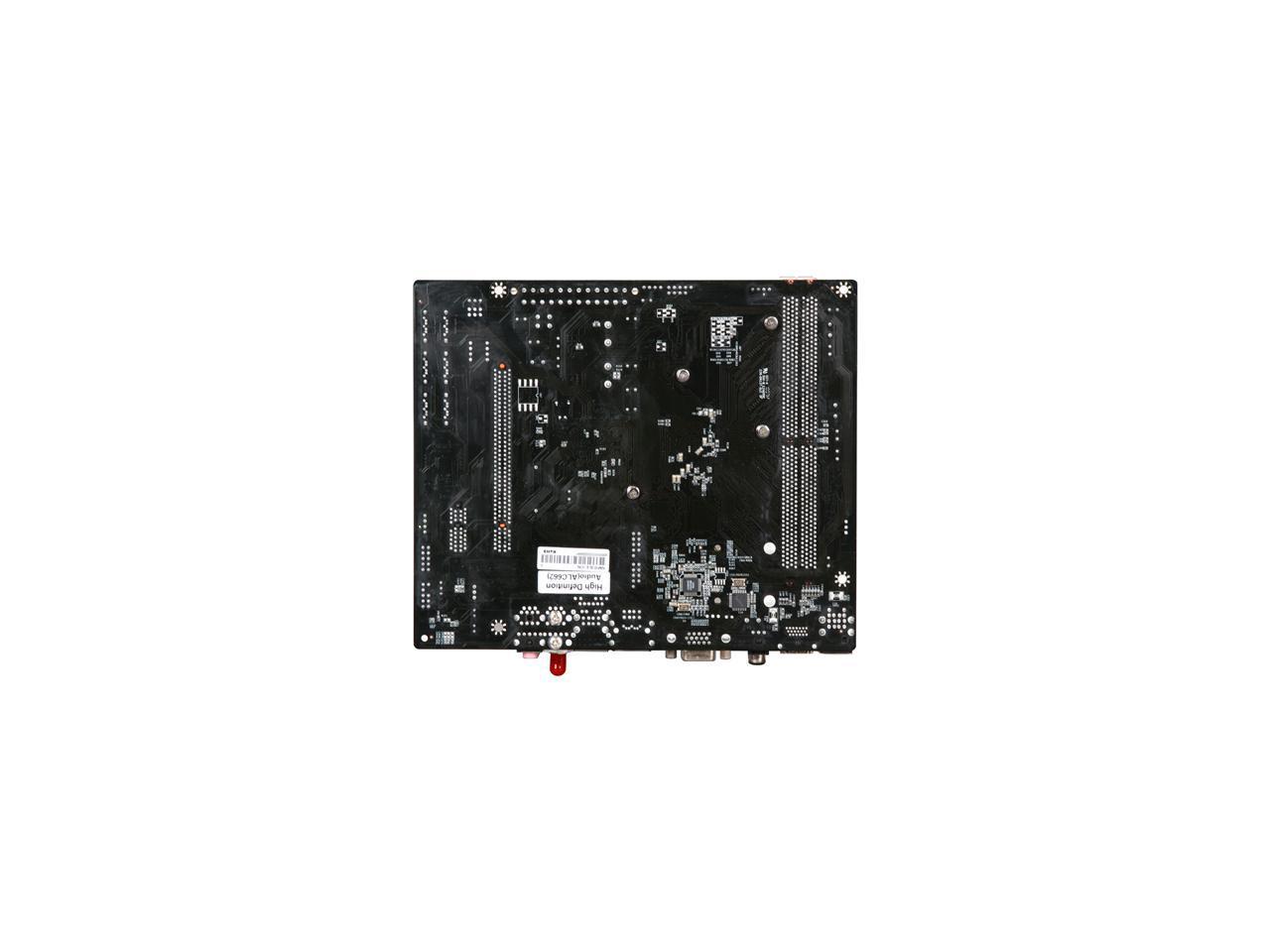 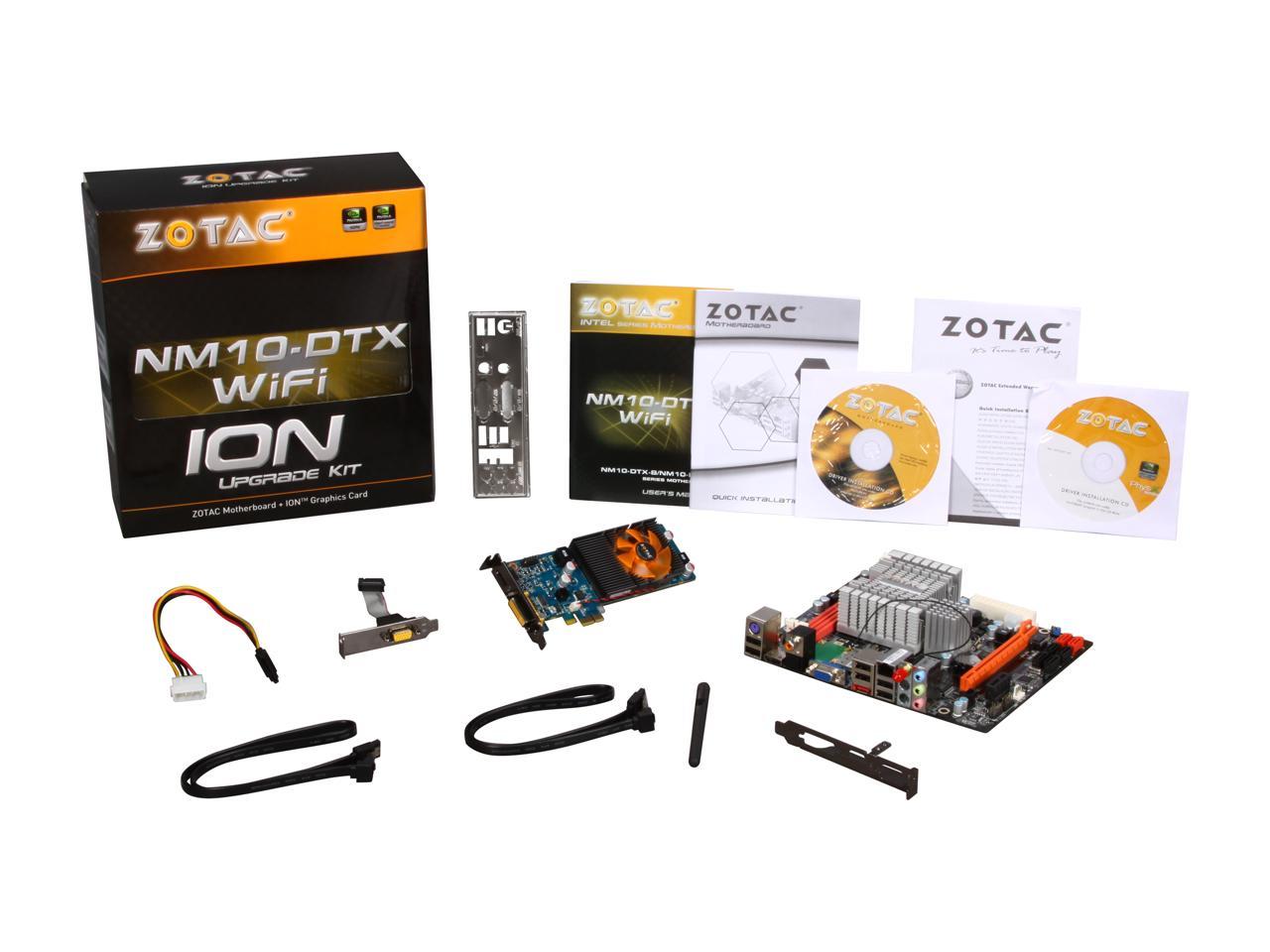 Learn more about the ZOTAC NM10-B-E-ION

Pros: Put this baby into a LIAN LI PC-Q08B case, plopped 4GB of DDR2 into it, 4 2TB HDD's, and set to work. Lets start off with the pro's. Easy setup: This thing was a breeze and worked flawlessly out of the box. Stand-alone ION2 GPU: This allowed for more efficient cooling, as the case I picked out mounts boards on the side instead of the floor and allows the GPU fan to suck cool air in from under the case. Quick: Dual-core 1.66ghz + hyperthreading makes for a nice HTPC board. Mine is running Ubuntu 11.04 + XBMC 10.1 "Passive" Cooling: Cooler parts last longer. That is a fact. Passively this thing runs cool to the touch, which is great. In my set-up though, I thought it best to go ahead and have my PSU fan (check out PSU mounting on the selected case) to draw from directly over the heatsink. This has kept everything nice and borderline room temperature, even under load, while maintaining a super quiet profile.

Cons: Now for the cons. 6 SATA ports? Pfft. There are 2 real SATA ports and the other 4 are -dedicated- to their RAID utility. It is setup via port replication on a third SATA connection, so pretty much you're stuck using these as RAID0/1/JBOD. Keep this in mind if you're planning on using more than 3 HDD's as individual drives. I was originally going to setup my HTPC with software RAID5, but had to settle with JBOD. This really bit me where the sun doesn't shine since it was undocumented. Speaking of SATA ports, the location is flat out idiotic. They are right next to the PCI Express x1 slot that the GPU is ment to occupy. This means that the heatsink on the GPU will either not sit in the slot correctly/firmly or it will crush any protruding SATA cables. One would think this could be corrected with 90 degree angled cables, but alas, all of these ports face the same direction. So if you put 90 degree cables in, they block access to the other 2 ports on the RAID chain.

Overall Review: I ended up putting the GPU in my PCI Express x16 slot since it was unoccupied to rectify the poor engineering on the SATA port locations. So not -too- irritating, unless I ever need that slot. If the top SATA row had been turned 180 degrees, this wouldn't be an issue at all. Remember that Zotac. Also, the built-in wifi is using the Aetheros chipset...can sometimes be buggy under Linux, but I knew that ahead of time. I am deducting 1 egg for the SATA stuff Zotac, everything else has worked flawlessly thus far. I almost deducted two because of the undocumented RAID stuff, but since I have recently found that you're working on a BIOS fix for allowing independent drive usage, I will let it slide this once.

Pros: 2x PCI-E slots (for included video card and a TV tuner) and a mini-PCI-E slot (for the included wifi, or one of your own). Runs great, currently running Ubuntu 10.04, wireless works, nvidia drivers support the ION GPU, and desktop effects work.

Cons: For some reason, if I put a memory stick in only the slot closest to the CPU cooler, the system will go into a reboot loop. If it's only in the slot furthest away, it boots fine. If I put it in both, the fans start once, then shut off, then start again and it boots fine. Also, no IDE connectors.

Pros: Small form factor Low power usage Runs/Compiles Gentoo quite admirably Runs cool (~23-30C) on average Fits perfectly in the Inwin Mini-ITX/DTX (IW-BM648.AD120TML) box I got on another site (though if I want to use the additional PCIe slot, I'll have to dremel it and fashion a slot even though there's space) - the Box conveniently is designed to flow the air in the right direction for the sink... perhaps a feature of mini-itx/dtx cases? ION Graphics card works great, including with video acceleration..

Cons: Slow rebate process (still 'pending' with no status update)... though the base price was pretty good, anyways. Video card can run hot, though that's more a factor of the purchased case design.

Pros: Fits in standard ATX cases Gigabit ethernet 6 sata ports PCI-e x16 and x1 Dual core+Hyperthreading runs circles around the Athlon64 it is replacing Esata and HDMI onbpard NO IDE/Floppy 8 USB ports (4 onboard, 4 by header) PCI-e x1 Geforce 8400 included, but not required--stuck it in my gaming rig as a dedicated CUDA processor. Silent design, but see notes below Built as a basic email/facebook system and so far it has performed admirably. I am glad computer manufacturers are getting away from 10/100 networking and making gigabit cards more common. I am also glad they are beginning to move away from legacy hardware (no IDE, no floppy, no serial, no parallel).

Cons: CPU runs a tad hot for my liking (60-65C under load), but no fan is provided. I grabbed a 60mm fan and screw-ed it in for cooling. Now it sits about 45C under load. CPU heatsink is poorly designed. Fins run vertically, not horizontally, so airflow coming through front of case does not flow through the fins, making cooling inefficient. Can't find any problems otherwise

Overall Review: Not really a con, but something to take into consideration. When it says DDR2 677/800, it really means it. I tried a stick of DDR2 533 and it did not POST. Works great with DDR2 800, though. I will probably upgrade it later, when I install win7, but 1GB is a good starting point for XP. Other hardware: 400W Rosewill LG Sata dvd-rw Western Digital 80GB Sata Harddrive 1GB Supertalent PC6400 XP Home SP3

Pros: Well designed for what we wanted; a file server by day, an entertainment center by night. Well built hardware. NewEgg was great on the return.

Cons: 1) No one, including Zotac Tech Support seems to know what memory this board needs. New Egg's writeup and Zotac's documentation state clearly DDR2. When I was chatting with Zotac, they said "I" had installed the wrong memory. When I pointed out that their documentation told me what to buy, he said "oops", and that a supervisor would call me. No one from Zotac has attempted to contact me. Worse, the few articles I read specifically on this board said DDR3 then switched to DDR2. This leads me to believe that the authors never put together a system but rather relied on factory papers. 2) NewEgg didn't mention that the board had a Raid controller on board. This caused me to have to change the original case I ordered and the drives from 1 3.5" drive to 2 2.5" drives and a 3.5 to 2.5 adapter. When I got to the fine print, it says you need 3 drives to configure raid 0? Tech support was again wrong and said it only supported Raid 5. Wrong again. See "Other Thoughts"

Overall Review: Continued: The problem is that the BIOS is not setup to handle the Raid controller so you have to install the OS and then the drivers for it to work. I'm not kidding, you will have a C: drive for the OS and a D: drive for your Raid. I have been in the Computer Industry for 35 years. This is one of the best examples of rushing to market before they (Zotac) should have. After 20 hours of figuring out what was going on I returned everything and will start over.

Cons: To really give what I believe is a good design every opportunity to avail itself, I held off returning this product for an additional week, 8 days actually. I contacted Zotac support on 3 additional occasions with one simple question; "Please tell me what memory make/manufacturer/type to use with your motherboard". I didn't even care about having to use a specific make/manufacturer, just some memory that would work. On every occasion, I received the same apology; "So sorry we haven't gotten back to you". Adding the same exact statement "someone will get back to me within 2 days with the answer". No one has ever gotten back to me. It appears that Zotac knows of the problem, but can't seem to fix it, yet continues to sell this product. I would give this zero eggs if I could, what else can you rate a product that doesn't work and the manufacturer not only refuses to stand behind the product, it continues to market a product that they appear to know doesn't work as promised.

Overall Review: This is the first time in my 35 years in high tech I have had a major company not get back to me; 4 times I contacted them. After wasting more that 20 hours on this, I would never consider using a Zotac product again. No product is worth buying when the manufacturer won't stand behind it. Others should consider these facts before buying this or any other product from Zotac.

Pros: This is the best deal, a Motherboard, CPU, and Video card all for under $100. I built this computer to be a "green" media server for my house and it has performed flawlessly so far! I am able to stream video to multiple computers with out any issues.

Cons: The included Ion card covers all of the SATA ports.... (unless you put the card into the 16x slot) but I use a Highpoint SATA 3 controller so this is not an issue for me. Also there does not seem to be a way to disable the on board raid controller... I do not need it and its an extra few seconds at boot up I would love to cut out...

Pros: Great little board runs windows 7 with no problems.

Cons: Gets a little hot under load. It overheated and froze so had to stick a fan on top of the processor to keep it cool no problems after that.