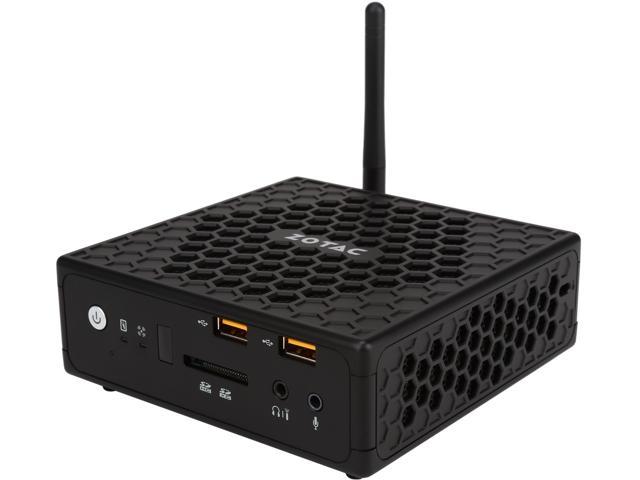 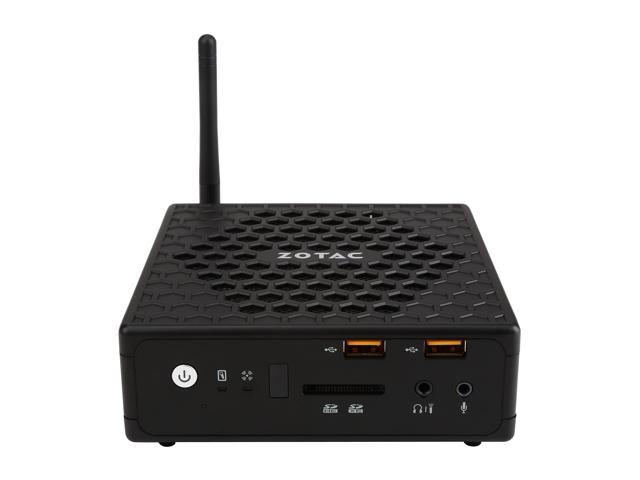 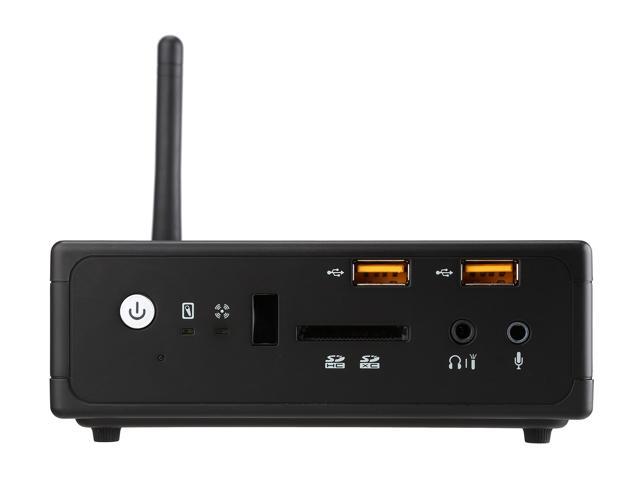 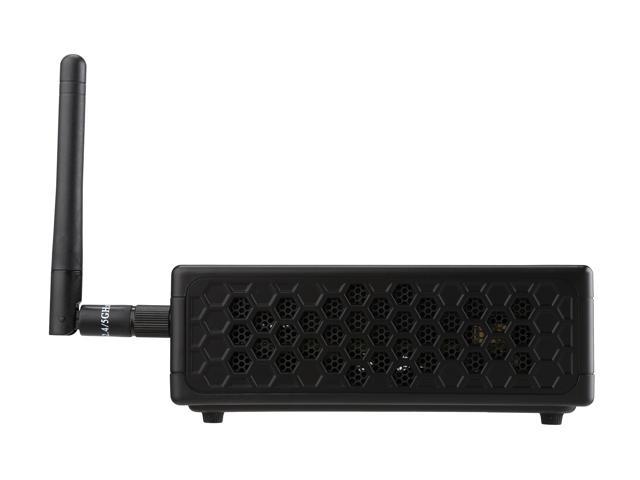 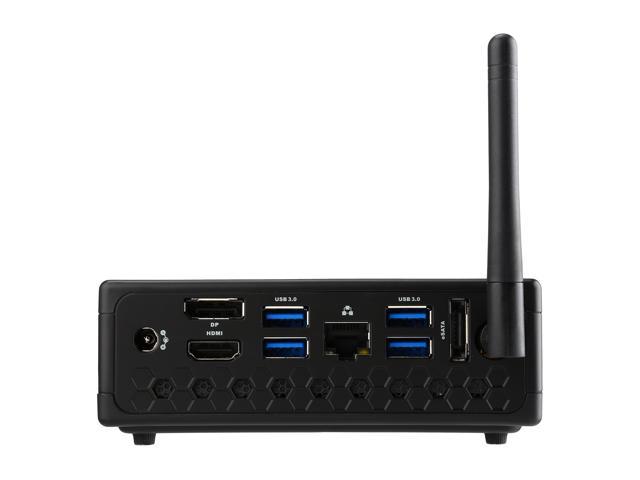 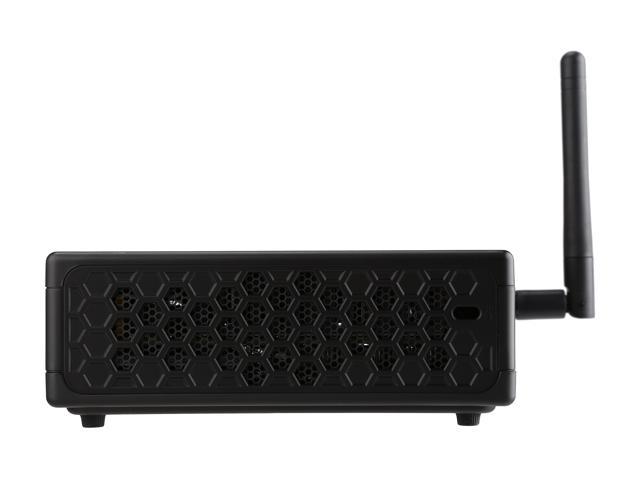 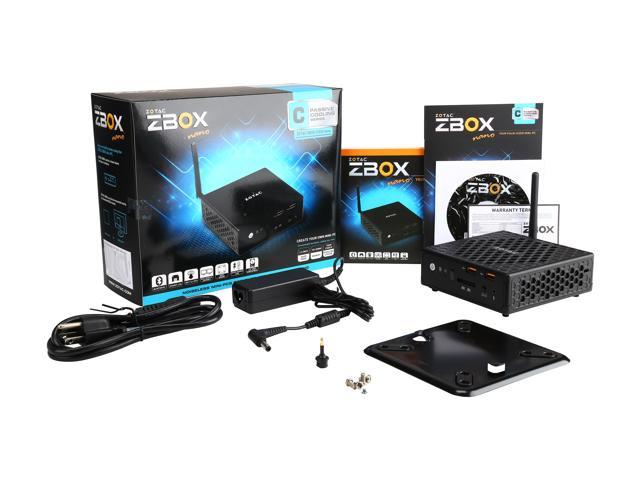 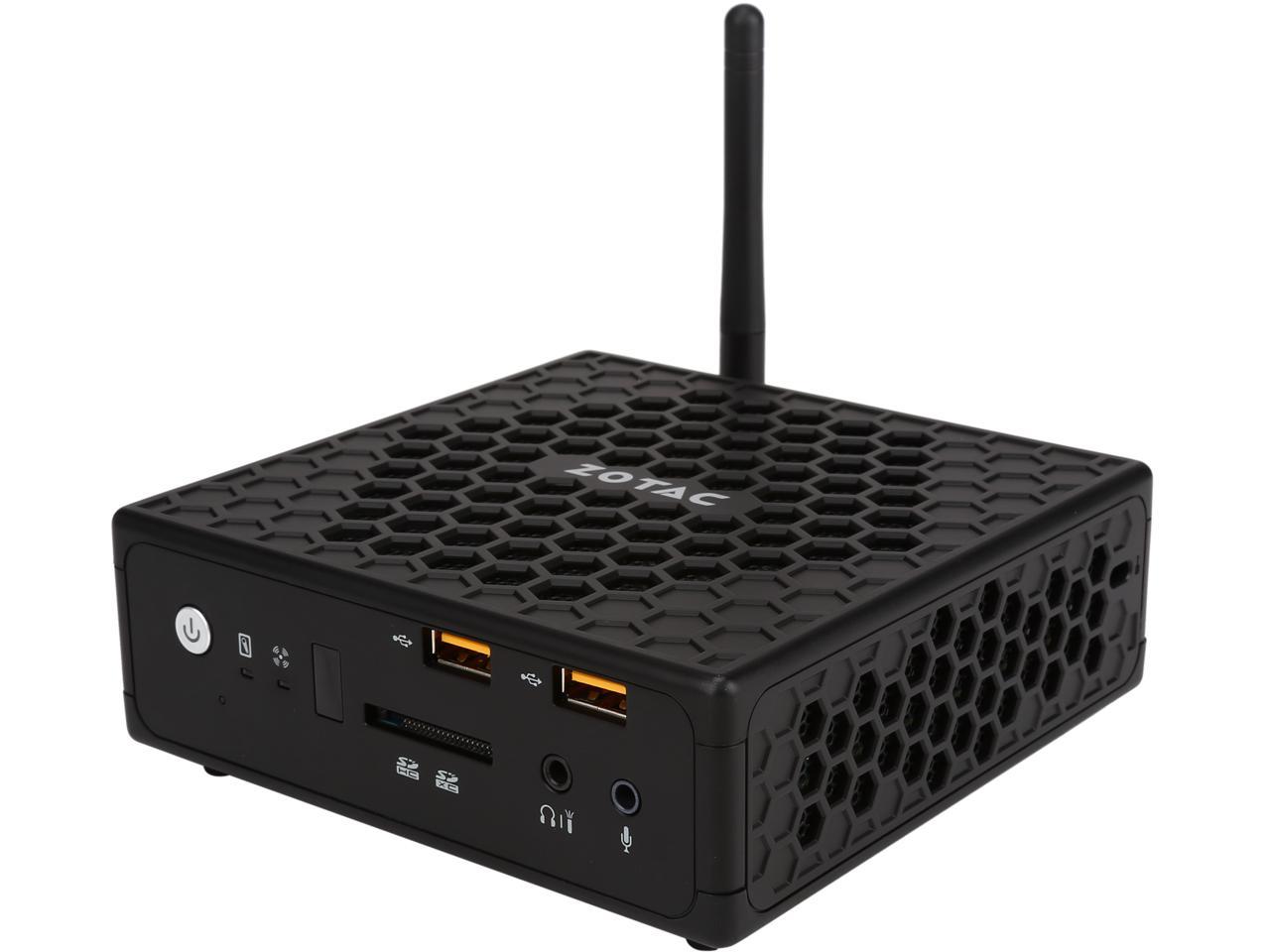 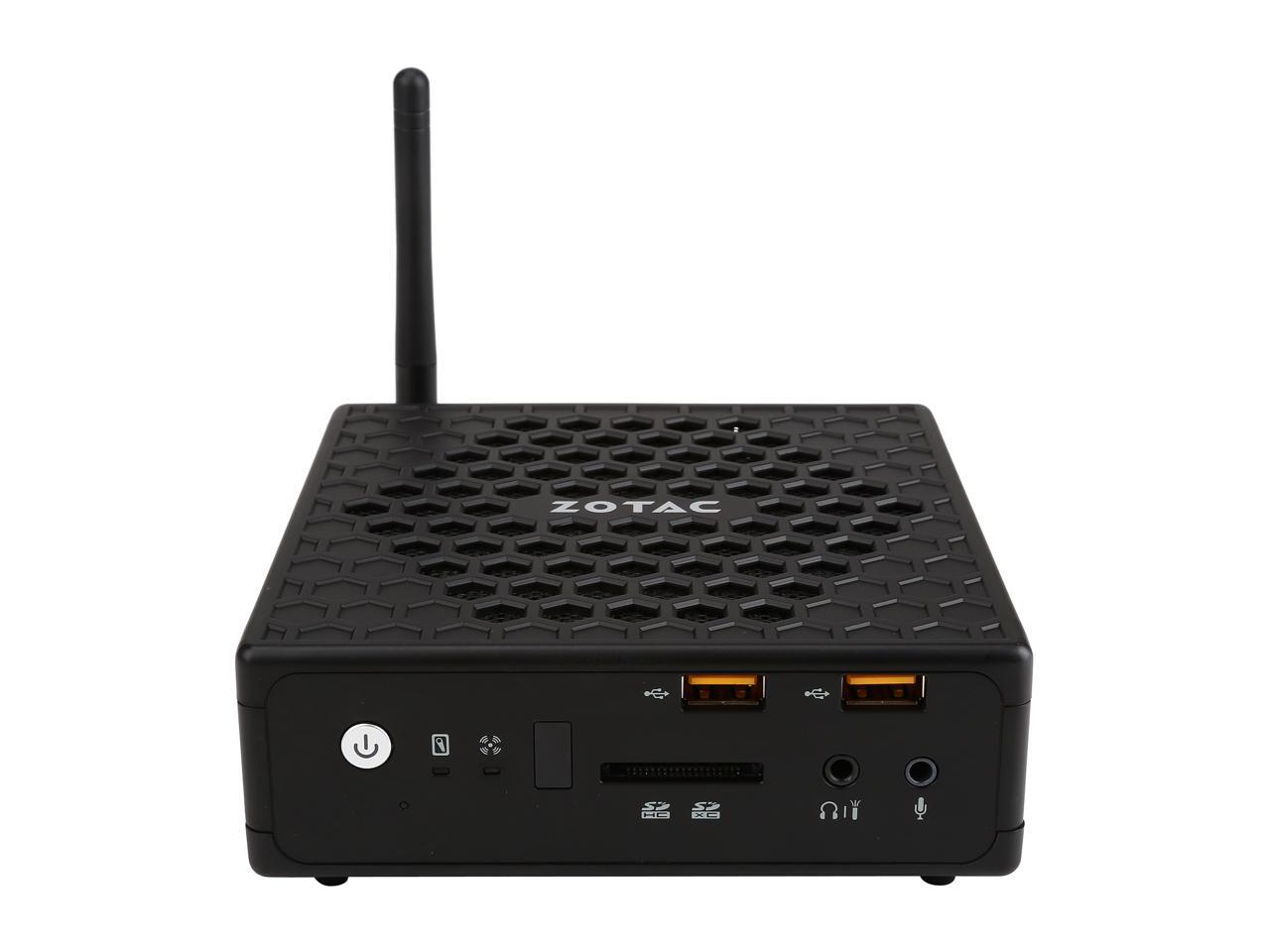 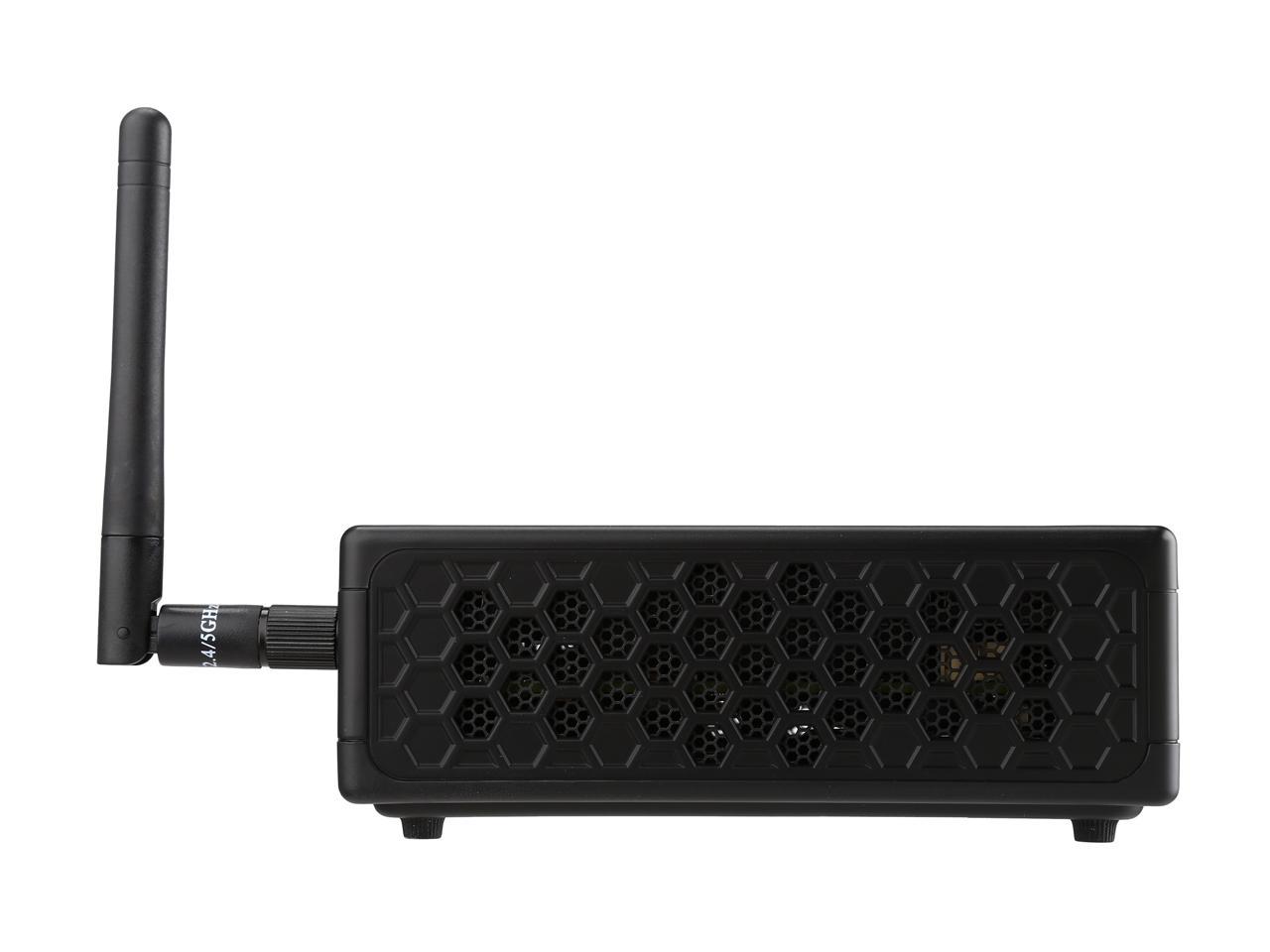 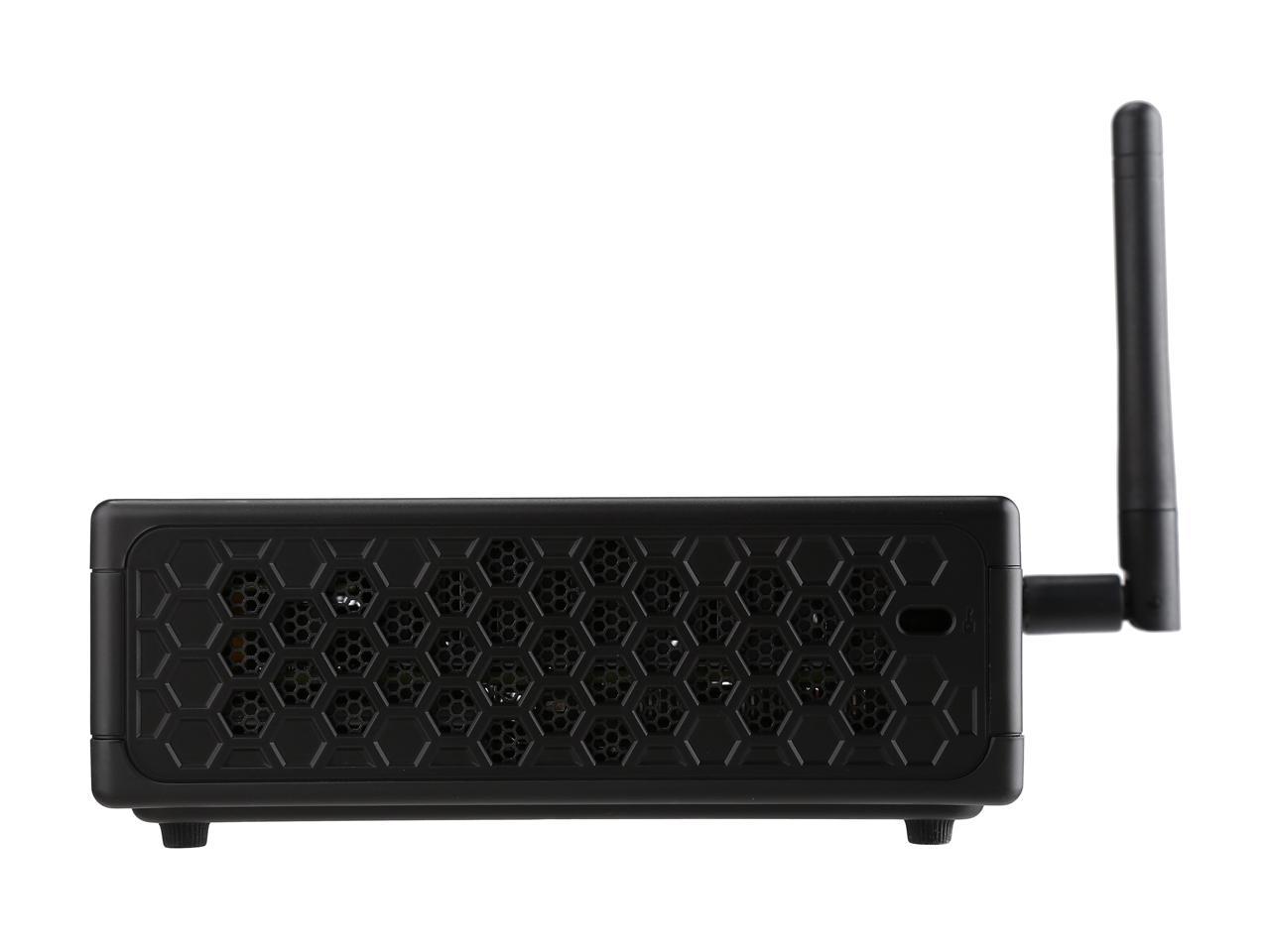 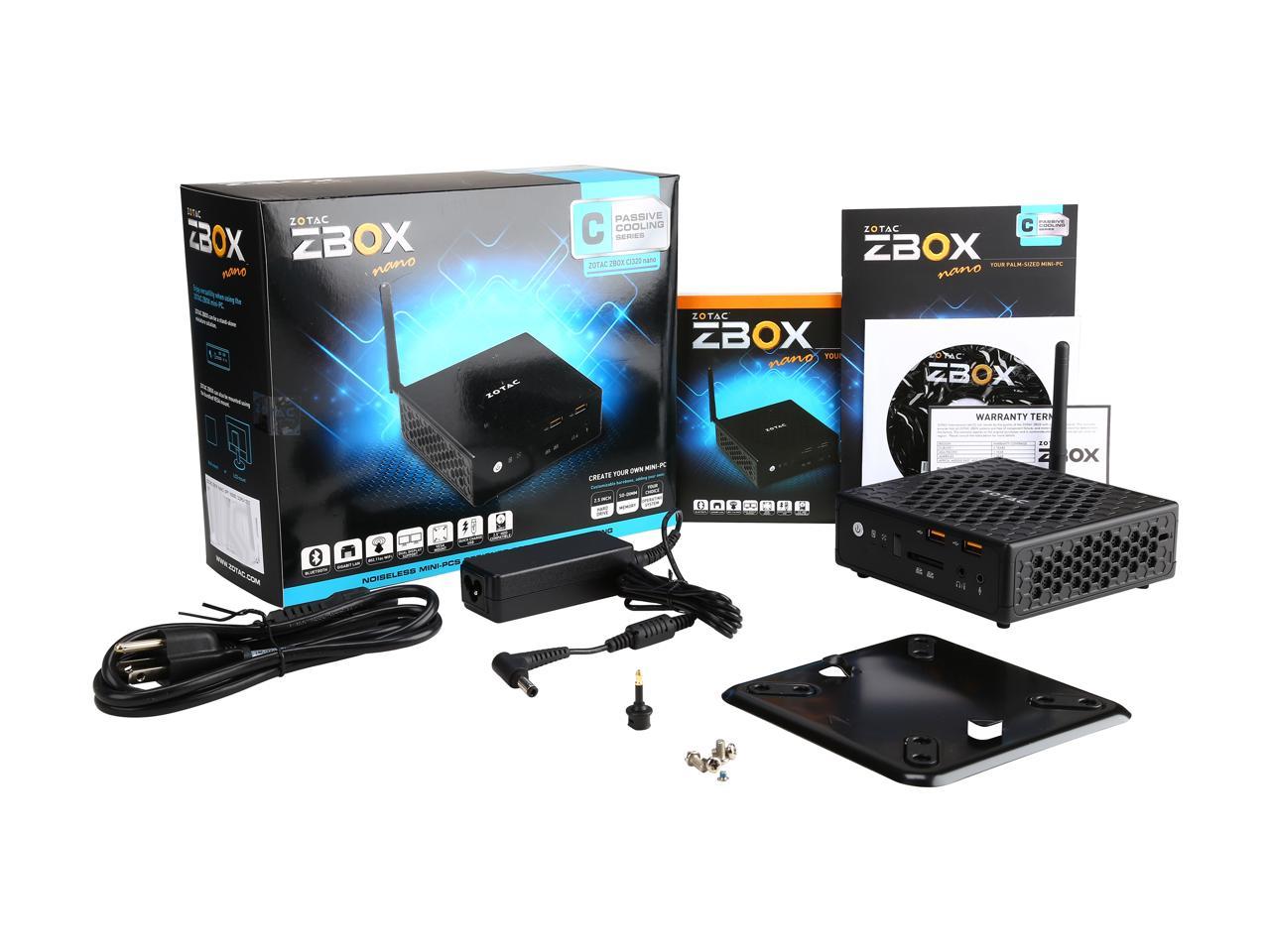 Learn more about the ZOTAC ZBOX-CI320NANO-U

Pros: I’ve installed 9 of these units so far and found very good overall performance. NO heat issues at all as reported by another owner here on Newegg. My units all run fine; simply feels average warmth on top and bottom of box (like a laptop or less), after extended use. Other user must have got a bum unit or had a bad SSD issue. I’m running my 9 units with a mix of 128, 256 and 512 GB SSD's mostly MX100's and a Samsung 830/840; with 4 and 8 GB of RAM mixed between them. Performance is fine with them all. Win 7 & 8 64bit, Word/Excel/Outlook, Skype (720+ 1080 webcams,) IE-11, Chrome, VLC – Blu-ray rip & HD 1080p playback, all fine; --all that is except for Firefox - which runs slow to startup (about 15 to 20 secs to get going) on all of these units -- as well as on some other Celeron 29xx based laptops I have used. Something with Intel’s latest Celeron's and FF seems to be the issue - I don't blame this on the zBoxes. I might not choose these Celeron based units for extensive media creation or HD media recodes or the like, but for everyday media consumption and run of the mill office/home tasks they’re fine. If you need more CPU oomph , then try one of their I3 or i5 based units. All start-up from cold boot to windows desktop in about 8 to 10 sec's I have also had some issues with the IR built, not sure what it is, have tried external IR as well which does work OK, but so far I have to rate these boxes as not great for IR, doesn't seem to wake up from sleep via IR (yes I set the BIOS/UEFI as instructed, still no joy.) Unit does (usually) wake from sleep via double mouse click (wireless mouse as well) OK. Built in WiFi & Gbe is good as well, tested both to be as good as any other recent device I’ve tested (and I’ve tested a lot of them.) I use these for Media Center based TV connected devices, and as reference workstations running Windows/Office apps in common areas. Even with the wonky built in IR - just use an external IR if the internal isn't working for you - its no worse than getting a NUC or Gigabyte unit that doesn't have IR anyway. Overall very satisfied, if I could get a few more I would, but they’re not in stock anywhere at the moment. Perhaps Zotac is coming out with units including Windows w/Bing - or otherwise a newer/mod version ? These are pretty new – they just came out in Aug Y14, so perhaps it’s a supply cycle/demand issue at the moment. Pricing has been all over the place, from a low of $125 to at least $190/bare that I’ve seen on some sites, so shop carefully if they ever come back in stock. Installation of the SODIM and SSD is a snap – no tools required to get in the case (finger tight bottom screws/rubber feet,) only small screwdriver for locking down the SSD is required.

Cons: built in IR a bit wonky - might need a firmware update; doesn't seem to wake up from sleep via IR

Pros: Built with a 120G Mushkin SDD and 8G of 1600 ram. Combined came to $240 - which seamed very reasonable. Running Windows 7. The CD driver envelope big enough to fully cover the top of this box. Yet is has full size HDMI and DP ports along with eSATA, 4 USB3 and 2 USB2 ports (looking at you NUC). Feels solid and mostly well built. The clip that holds the SDD in place wasn't fully aligned, but its adequate. After initial install, Windows Update was running (downloading and installing hundreds of patches), along with Firefox which was down-loading Anaconda., and Chrome with 4 open tabs, one of which was running music player from my cloud-based music. All with no stuttering or sluggishness. The above had the CPUs averaging about 75-80%, and the case got very warm. Not uncomfortable to touch, but warm. I'm using this as a second system in the office, where space is at a premium. The front panel nestles just under the lower edge of my monitor. Compared to the i3-based company pizza box: This has faster memory and hard drive scores, the i3 shows somewhat better CPU scores, and the i3 has much better video scores, per Widows 7's performance tests. My uses are not graphics heavy, and the memory/drive speed should offset any differences in cpu speed. So I'm a happy camper. So far, everything has been downloaded via WIFI. No problems with the card, it works fine. Bluetooth is also included, but I haven't played with it yet.

Cons: I wish at least one front USB port was USB3. I move a USB3 stick back and forth between work and home, and in my setup, its not convenient to reach around the back to leverage the USB3 ports. Newegg didn't offer me an extended service policy, leaving me a little concerned about its expected long-term durability.

Overall Review: 8Gb of memory seems to me a cheap way to keep things moving in this box. The price difference to 4Gb is pretty negligible when you think about it. I've got external USB hard drives, if I ever need big storage space. So paying $10 extra for an SSD was a no brainer. I'm hoping that the passive cooling leads to fewer dust bunnies inside. Power consumption is low. I believe the brick is rated at just over 5 amps. Not in Pi territory, but a Pi couldn't keep up with this in processing. Newegg has just announced a $30 price reduction. Rats.

Pros: The Zotac ZBOX CI320 is a silent and very capable HTPC for running Kodi (formerly known as XBMC). Paired with a good amount of RAM and an SSD, it's responsive and does the job. It seems to be able to play 10-bit 1080p video (with AC3 transcoding) without any problems in Kodi. The unit comes with an IR sensor, and it works with old Windows Media Center RC6-type remotes. The only caveat is that the remote cannot switch on the PC.

Cons: At this time (02/2015), it apparently doesn't work with the latest versions of OpenELEC due to an issue with the Linux kernel working with Bay Trail processors (it freezes often). I haven't tested this myself, but the Kodi forums seem to suggest that. It works fine running on Windows 8.1. The unit I got was marked as a REV 2 unit, and the included WiFi antenna didn't fit. The included antenna was probably made for the original hardware revision (it had the writing "2.4/5 GHz" printed on it, replacement had nothing printed on it). I contacted Zotac Tech Support and they initially suggested I return the unit, but they changed their minds and sent me the correct antenna.

Overall Review: Manage your expectations with this PC. It's not the latest (and more expensive) Intel NUC with a Core i7 processor, but it can handle HTPC tasks relatively well. Anandtech has written a good technical review on this PC so those looking for graphs and numbers can look there.

Pros: Passively cooled - *so* nice to have silent computing! Low power - I haven't measured it but other reviews report 10-20 W depending on use and peripherals Connectivity - 4 USB3, 2 USB2, eSATA etc Tiny size - barely uses any desk space,

Cons: I wasn't paying attention and didn't realize that I would need an adapter to connect to my DVI monitor. A HDMI to DVI did not work but a DispalyPort to DVI did

Overall Review: I installed Win8.1 (I wish I would have installed Win7), Mushkin SSD 240 GB, Mushkin 8 GB RAM. External Samsung optical drive. Sweet set-up. Plenty of power for home computing: spreadsheets, word processing, Internet, audio, etc. I bought this for the silent computing and low power and couldn't be happier. I don't miss my old Dell tower at all.

Pros: I installed a 120gb intel ssd and 4gb or ram. I was a bit worried when my wife told me she was going to install photoshop after i already purchased it. Photoshop loads and runs flawlessly even on this lightweight celeron. I have mounteded it to the back of the monitor. Keep in mind, she doesn't do any gaming, just office work and photoshop stuff. It works perfectly for what I bought it to do.

Cons: Wireless range is a bit weaker than average, but that isn't a deal breaker for me.

Cons: When I go to power down the device, it does not shut off. I need to physically unplug the device. Customer service does not reply or answer their phones.

3 out of 3 people found this review helpful. Did you?
Manufacturer Response:
Hi Jacob, We're sorry to hear about the issue you are having with powering down. Please contact our ZOTAC customer service team directly to allow us to assist you with a replacement while also allowing our team to collect more detailed information regarding your unit. End user experience is very important to us. 1-877-596-6822 9:00am – 6:00pm PST Mon – Fri. ZOTAC
Allen S.
Ownership: 1 week to 1 month
Verified Owner
Good and cheap2/9/2016 11:03:47 AM

Overall Review: Bought a couple of these to use as linux servers for some light automated web scraping. Got 4 gigs of GSkill RAM and Mushkin SSDs for each and installed Ubuntu Server 14.04.3. Don't have any issues, but I'm only using the wired network, usb ports, and video. Installed OS from flashdrive, but had a few issues at first. Don't use unetbootin to create your bootable flashdrive. On this machine it discovers the flashdrive before the SSD and assigns the flashdrive to SDA and the SSD to SDB. The install goes fine until GRUB tries to install; it will only install to SDA1. So I created another bootable flashdrive with mintStick (called "USB Image Writer" inside Mint). This installed fine. Note: somebody below said you have to change the boot type from UEFI to Legacy for Linux/Grub. I did with unetbootin, but not with mintStick. I'm using the default UEFI Windows 8 option.

Pros: Small, compact, and able to output a clear/vivid picture to a 70 inch TV. Fan less is nice. Wired and wireless networking is great as well. All this in a small package that can be placed anywhere.

Cons: Non but read my other thoughts. If using Ubuntu on this, push sound through the mini-SPDIF connector to an optical audio cable.

Overall Review: Its celeron so get other items to speed things up. I used a 500GB HDD and 2GB of RAM. It performs slow on data transfers from a USB 3.0 drive while playing a video on youtube at 1080P at full screen. I think this configuration would still be acceptable but for use in small server deployment using Ubuntu. Spend the extra money and get 8GB and an SSD. I can t say that this is really a con though just food for thought. Also even though its fan less keep your ambient temp low as the heat slows things down. A small desk fan from a local general store solves that. I already use one to keep my sound system cool to ensure functionality when used for an extended period. No matter what anyone says, fan less is cute until things get hot for one reason or another.