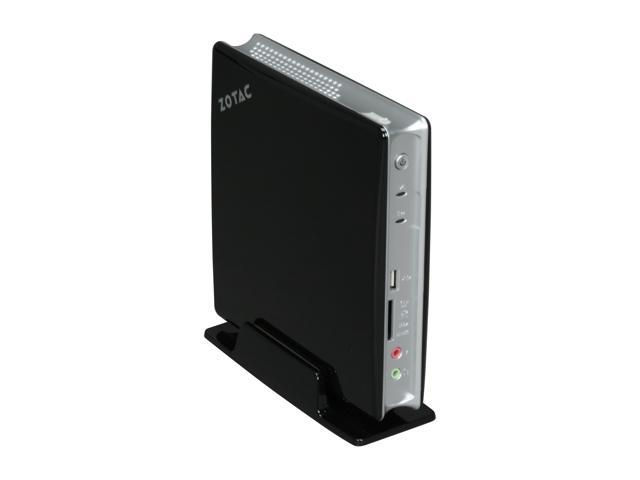 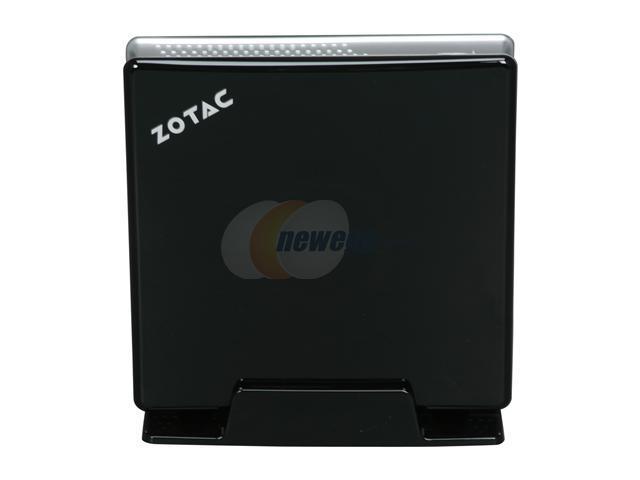 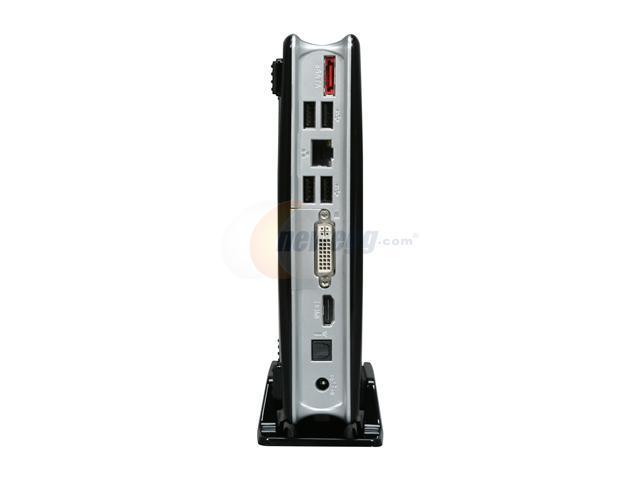 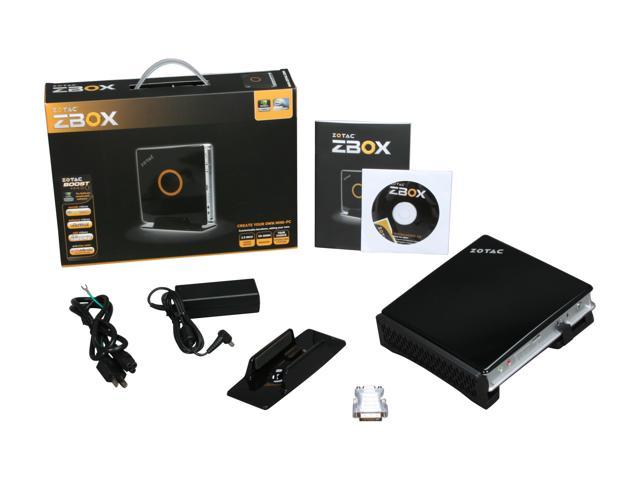 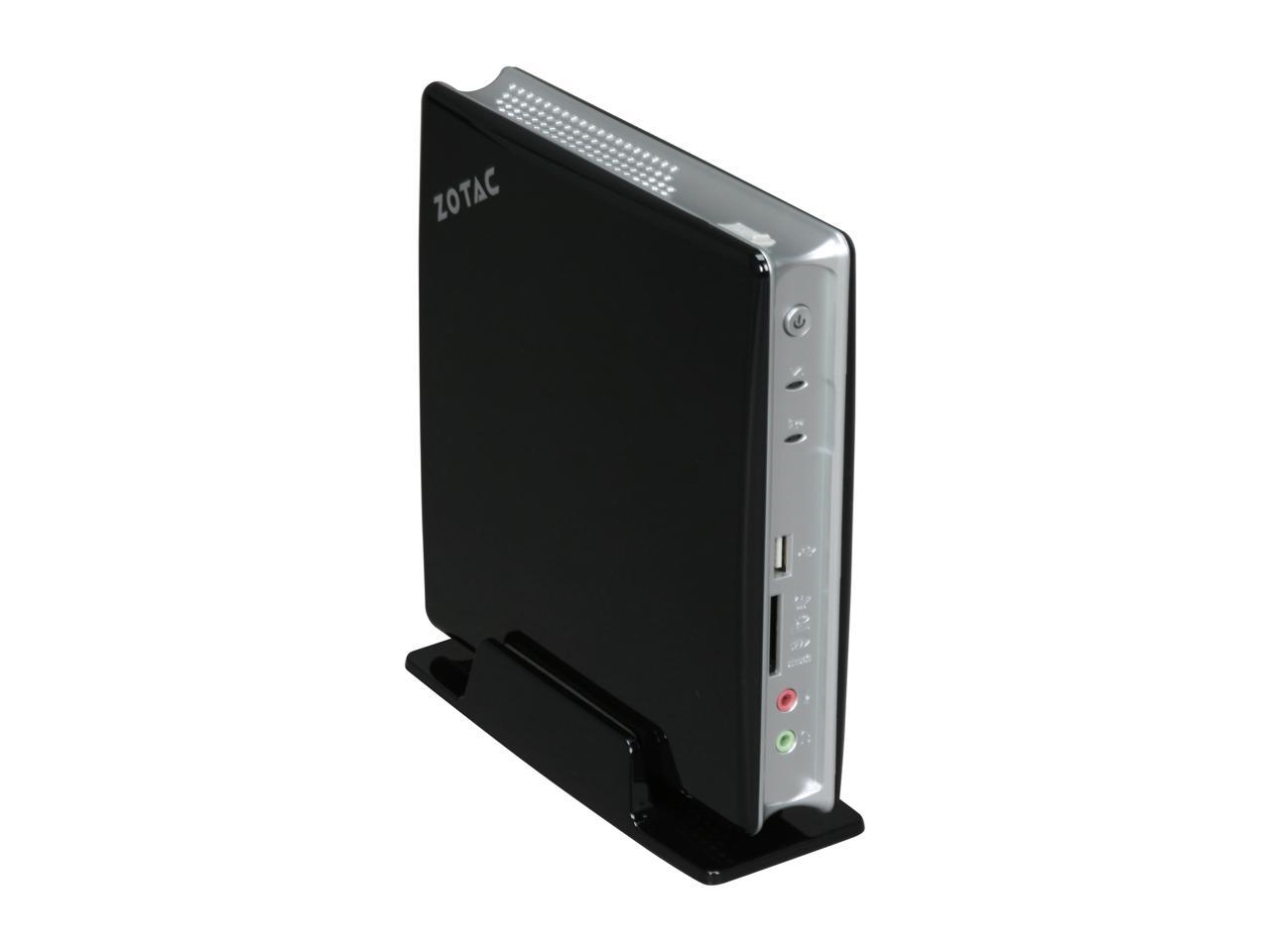 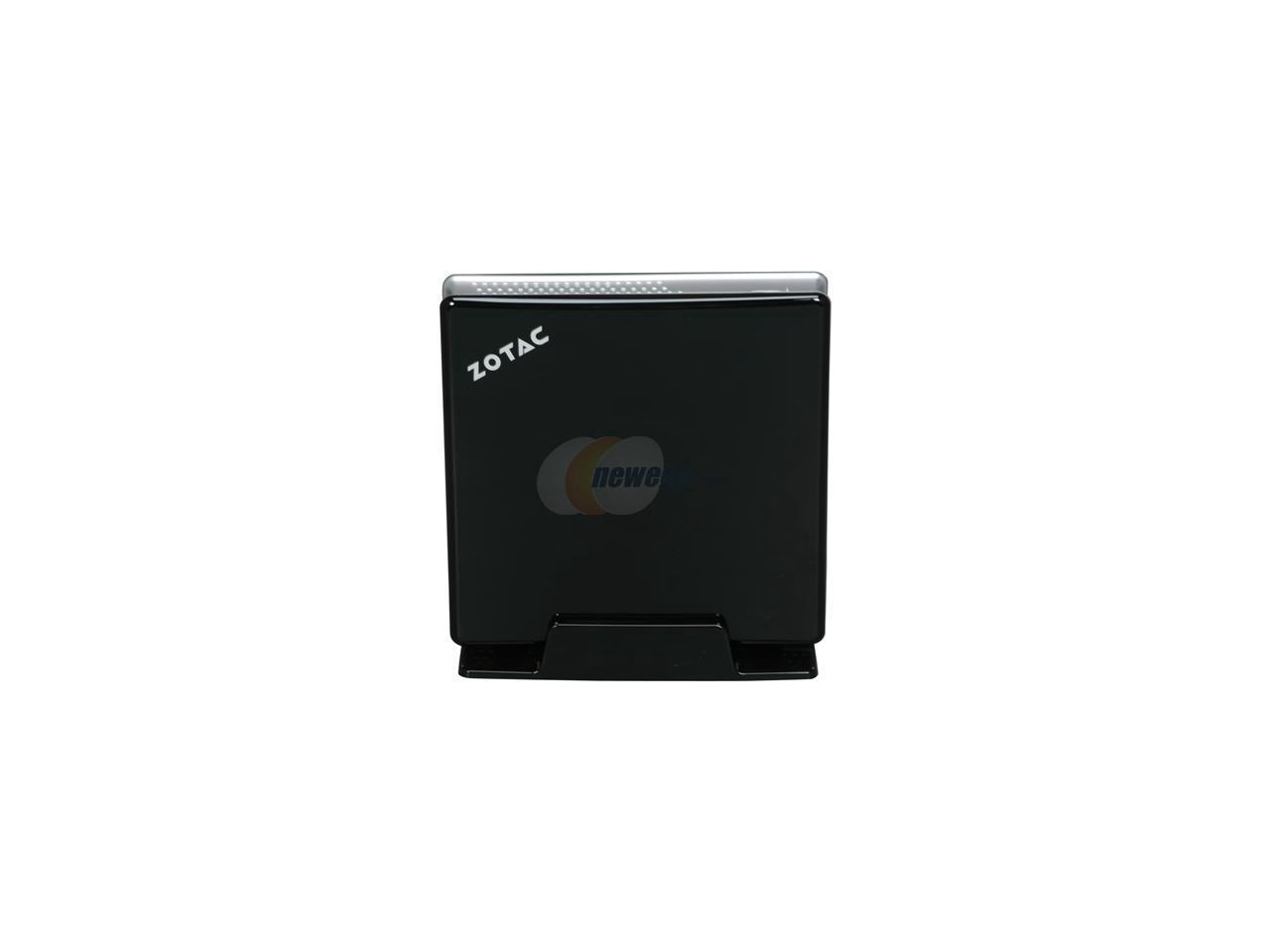 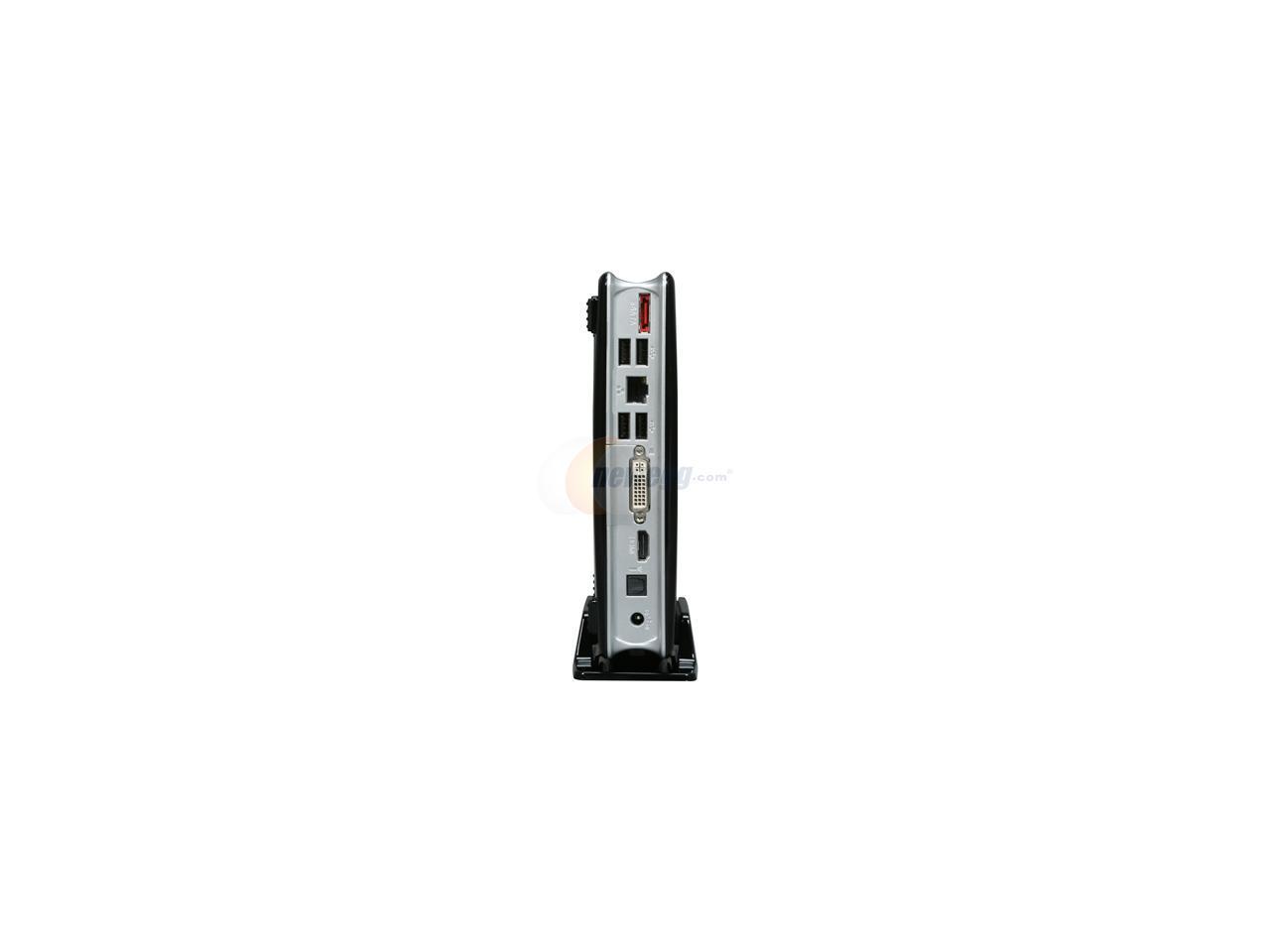 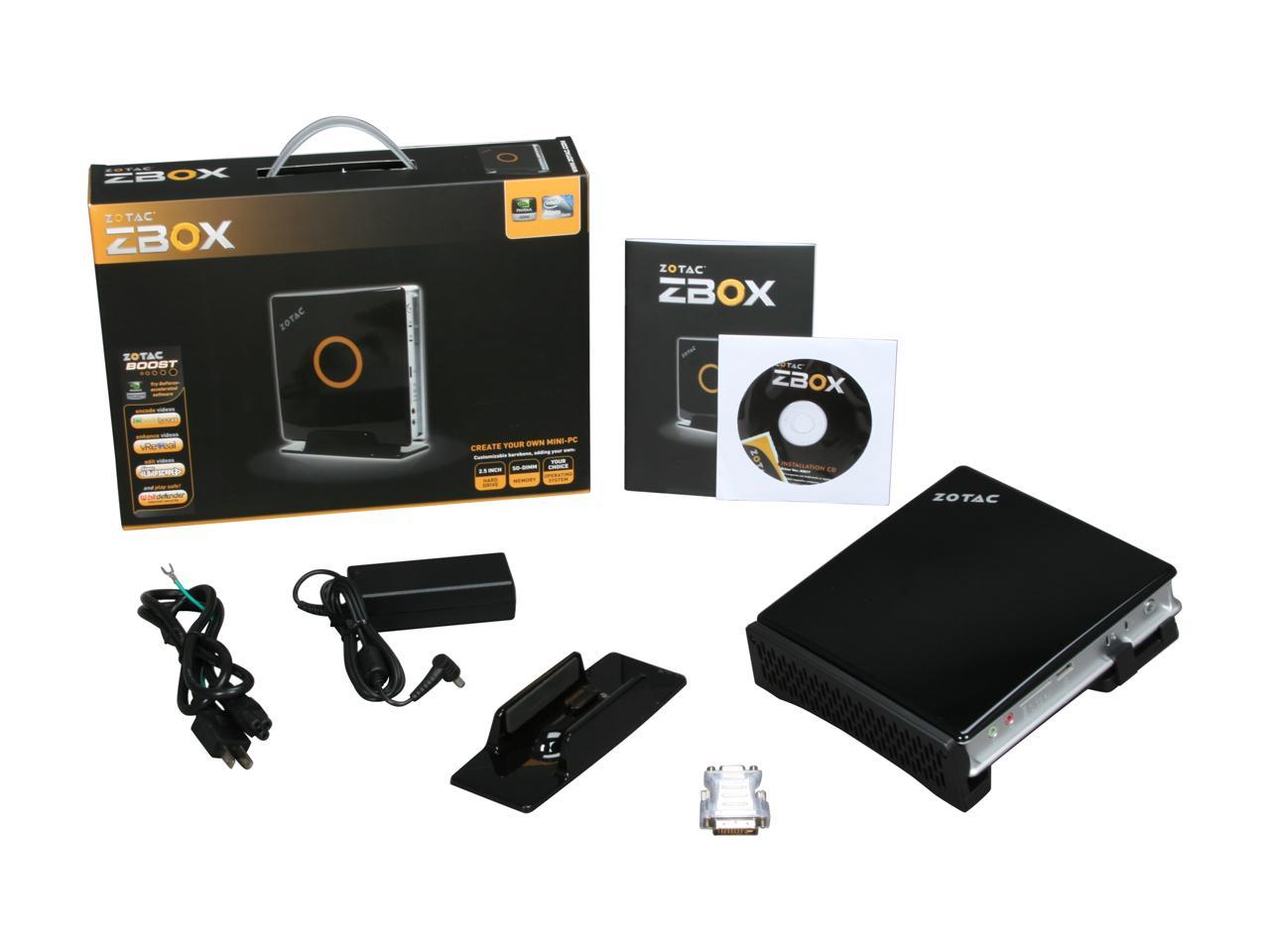 Pros: Works great under windows 7 and ubuntu. quiet and compact. fast enough for almost everything.

Cons: Bricked my first one when applying the bios update., tech suport was good but newegg replaced it. Atom and Ion are not quite fast enough to play 720p h.264. Hardware acceleration is not quite good enough, but it's still new and i'm sure there are optimizations that in the pipeline. i hope it will be able to play them in a few months, in the mean time I'm trans-coding to xvid. audio over hdmi was a PITA with Ubuntu but i did get it to work eventually with a lot of goggling.

Overall Review: The VESA mount is fantastic, hides right behind my 26 inch lcd.

Pros: Very small and handy. Quiet machine and lots of connecting ports of all kinds.

Cons: The BIOS recognize only 1 core, but my Ubuntu 10.04 recognize 4 CPU. no Documentation for the BIOS. I only put 2GB of RAM (DDR3) and is working. I haven't tested it with 4GB.

Overall Review: When I turn it on I heard one beep at the BIOS start up. In general works great in with Ubuntu but flash player get frozen with HD videos. After installing the NVidia drivers Compiz works very good and the effects are very smooth. I just have problem with Flash.

Pros: Small, Quiet, Comes with VESA Mount. Very easy to install the drive and memory, just two thumb screws. Decent amount of options in the BIOS (hit DEL to access the BIOS BTW). According to my Kill-A-Watt it averages about 20 watts of power.

Cons: Construction does feel a little cheap, but this shouldn't be an issue really. I wouldn't suggest stacking anything on top of it, but then you shouldn't stack any small electronics or they cannot breath properly. Doesn't seem to support Wake on USB. Still researching, maybe I'm missing some setting somewhere, so I'm not going to knock off an egg for this.

Overall Review: I have an ITX based system I've been using for a while now to run XBMC, decided to give this little box a try because it was cheaper and smaller and I needed a second box. Paired it with a Kingston 8GB SSD (N82E16820139427) and Mushkin 2GB DDR3 (N82E16820226018) From opening the box to watching video the whole process took less than 30 minutes. Installed XBMC Live 9.11 Repack via USB. I don't have any 1080 movies, but it plays 1080 Quicktime trailers without even hitting 20% CPU load. This thing may not play 1080 under Windows (guessing other reviewers tested it using Windows) but it seems to run great under Linux. No tweaks or adjustments needed. Plugged it into the TV, detected it was on HDMI so it set the video to 1080 and switched to digital audio over HDMI for me! I might consider replacing my ITX system with another one of these.

Cons: Runs a bit on the hot side. I'd recommend running it with the vertical stand. Heat does seem to flow pretty well out of the top and sides.

Overall Review: I popped a 2gb DDR3 samsung memory module in this box and it worked great. I was going to use an SSD as the main disk, but that seemed like overkill when I figured I could run XBMC right off of flash drive, which I did. XBMC runs great, I couldn't be happier. This was to replace my WDTV Live.

Pros: It is small, typing on it now, can barely... barely... hear the one fan. Windows 7 flashed from a flash drive in Fat32 worked like a charm. No need to tell it to boot from USB at all. Had to remove it during installation once data had expanded - kept booting to the USB and stuck in an endless install cycle. The onboard graphics are unreal for on-board graphics.

Cons: It is brand new. Probably two people have purchased this version, me and the other guy on here. Firmware, BIOS, all seem to be from the previous model. Does not support 4GB of memory in 64-bit. Only 3.25, like it was in a 32-bit environment. I am using the exact RAM they tested on the website's approved list. Most importantly, 7 and the BIOS are only recognizing 1 Core! So, other than basic, basic websurfing... this baby is S.L.O.W.! Not going to attempt HD video streaming until I get this fixed.

Overall Review: Windows 7 took up 15GB on my SSD with this little guy, and my server(movies) installation of 7 took 23GB on the same model SSD. What gives?

Pros: Atom N330 + Ion 1 is my preference for HTPC; it'll be perfection once Netflix moves to Flash (or MS sorts out silverlight on ION properly), but for now it plays everything else great, incl. fat blurays. Obviously you must have latest drivers and most of all DXVA acceleration enabled. I use a 16GB SSD ($60) with a low-fat Win7 and it really is very quiet indeed (but not literally silent). Given that a small SSD is so cheap it's the preferred option with this barely-ventilated case.

Cons: None, if you have correct expectations of an Atom/ION board; great for web browsing and _almost_ all video (except netflix HD due to silverlight). Wifi is a bit pointless IMHO; this is basically an HTPC and you're an optimist indeed if you expect to reliably stream video to your HTPC over wifi. I just wanted the slim form factor, and I like it.

Overall Review: These things run dual 1920x1200 monitors just fine so I use one as a montior extender (maxivista) and one as an HTPC. With a cheap SSD and stripped down win7 it boots in maybe 8 seconds. You can boot Windows off SD/Flash stick but it's quite painful in use and a cheap SSD is vastly superior.

Pros: This is an awesome little barebones system! I built it for my parents to use as a desktop system; this little guy is more than powerful enough for what they need. They are not power users and do basic things like surf the net, email, create documents, watch videos on the net, etc. I can’t comment on using this system as an HTPC, however I have played some HD (1080p) content on this system and it worked flawlessly through the DVI connection to a 20” LCD monitor. I just gave the system to my parents yesterday so I had over a week to play around with it and put it through its paces, including some benchmarks, etc. This system is also near silent, you only really hear the fan when powering up and when the CPU heats up. It took less than 10 minutes to install the extra hardware and have windows start the install. This is by far the easiest ‘build’ I have ever done, and I have built a lot of computers over the years including HTPC’s and small form-factor PC’s.

Cons: The only con I can see is that this little system runs a bit hot. CPU temps average 70 – 75 Celsius. It also would have been cool if it came with a remote, but you have the freedom to choose the remote you want, so it’s not a big enough deal to take any ‘eggs’ away. Other than that I have had no problems with this system at all.

Overall Review: Specs: - Windows 7 Ultimate x64 - Zotac ZBOX HD-ND02-U - 4 GB of Patriot DDR3 1066 Laptop Ram - Western Digital 160 GB 7200 RPM Laptop Hard Drive - ASUS External DVD Burner <Hardware also purchased through NewEgg.ca> I would have loved to put an SSD in this system but this was a budget build and really, for what this system is being used for, it was unnecessary. Up the road I may purchase one of these to be a front-end to my media server. I also really like the fact that this came with a mounting bracket that fits onto the back of your TV or LCD monitor so it’s out of the way. Plus it has an HDMI port which also supports audio... I did try this out and it also worked perfectly connected to my 20” LCD via HDMI. I completely recommend this system to anyone looking for a desktop replacement or a small HTPC. In fact, the next system I build for a ‘non power user’ will be this as its small, cost effective and just plain cool.

Pros: Quiet, Easy to install ram and drive. Works great with Ubuntu Linux (did not try HDMI). My UPS claims it's only using 10W or less, haven't verified yet. Pretty snap local service with 2 GB of RAM and an SSD.

Cons: No access to the bios, so not sure if it has wake on lan or not and can't disable some of the external lights which are a nuisance or the wifi which I don't need on a lan wired server.

Overall Review: It would be great to pick the color of the circular light on the outside rather than it be based on the model type.