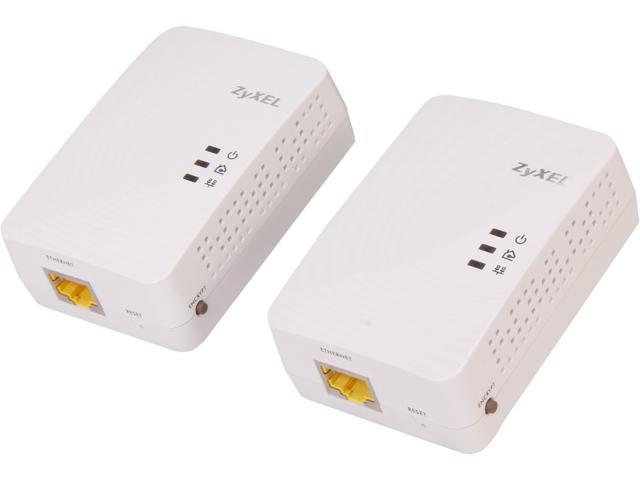 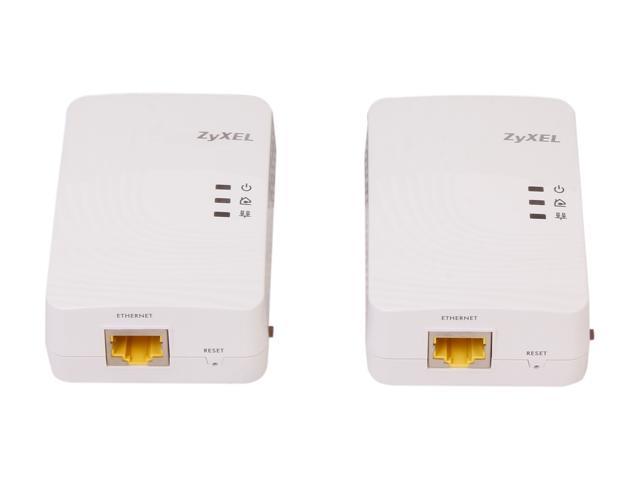 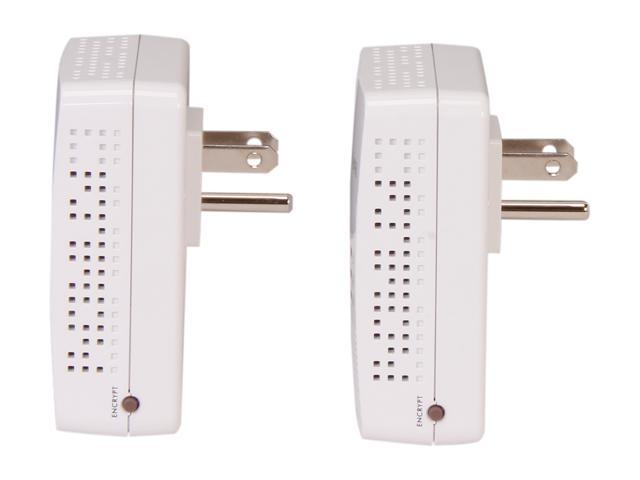 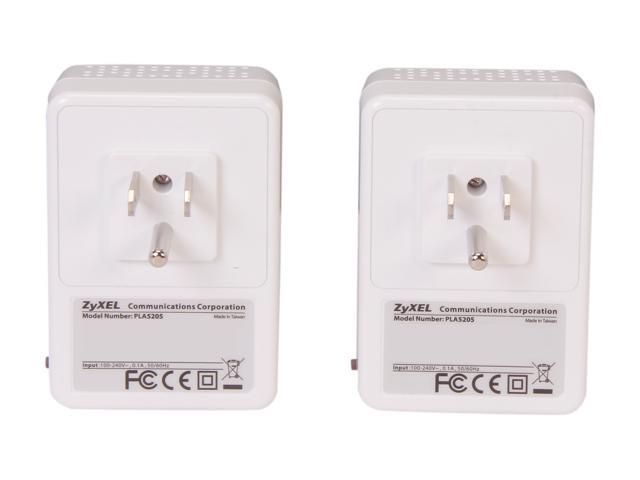 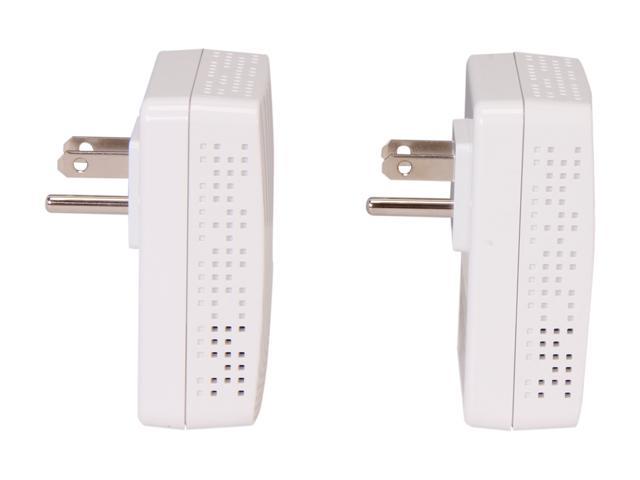 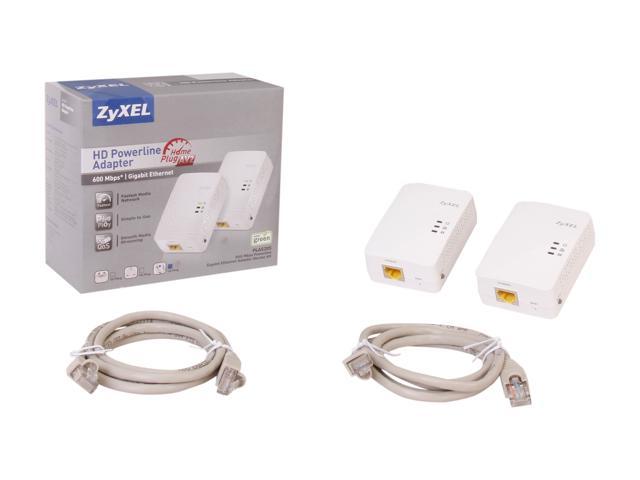 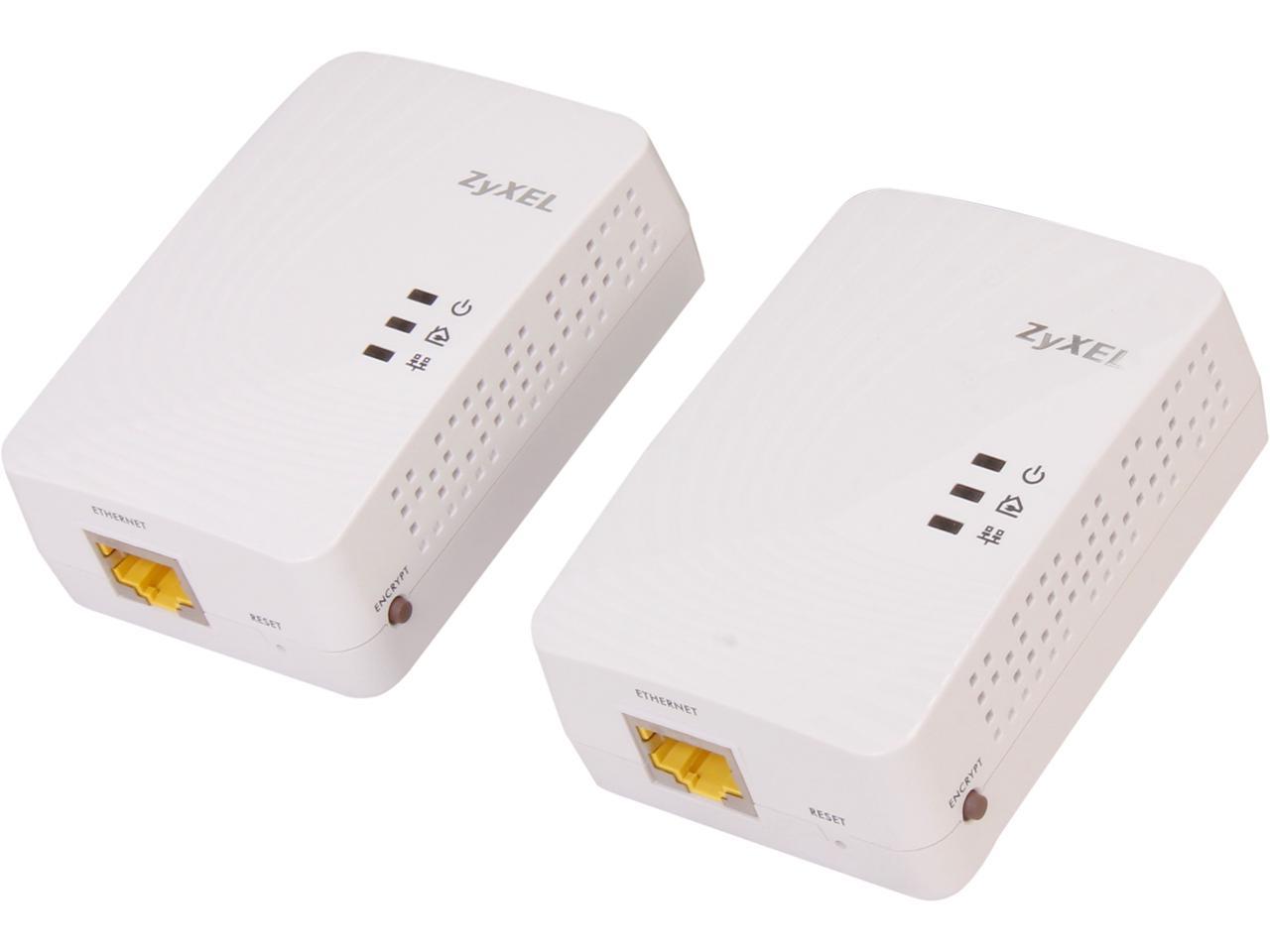 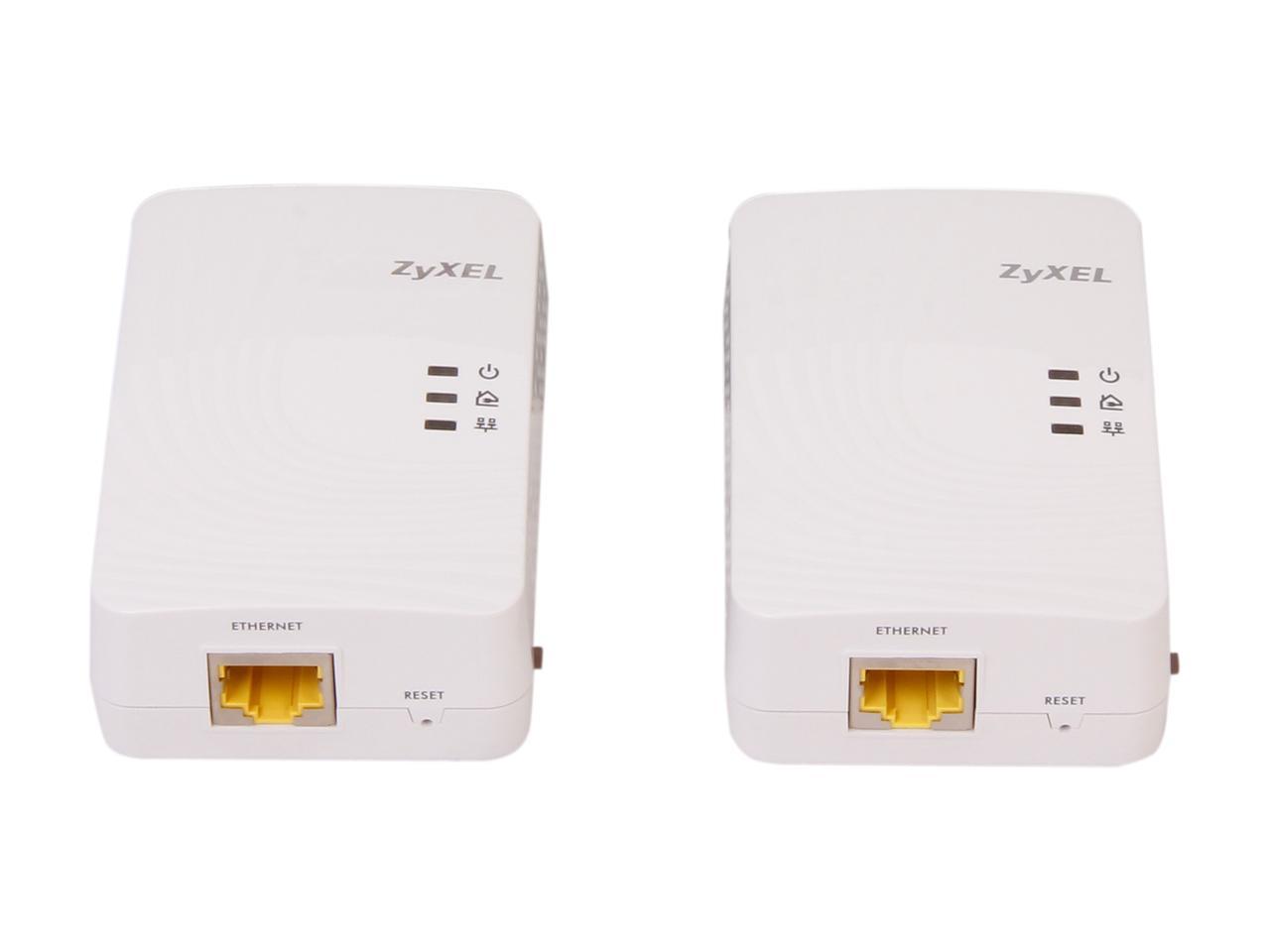 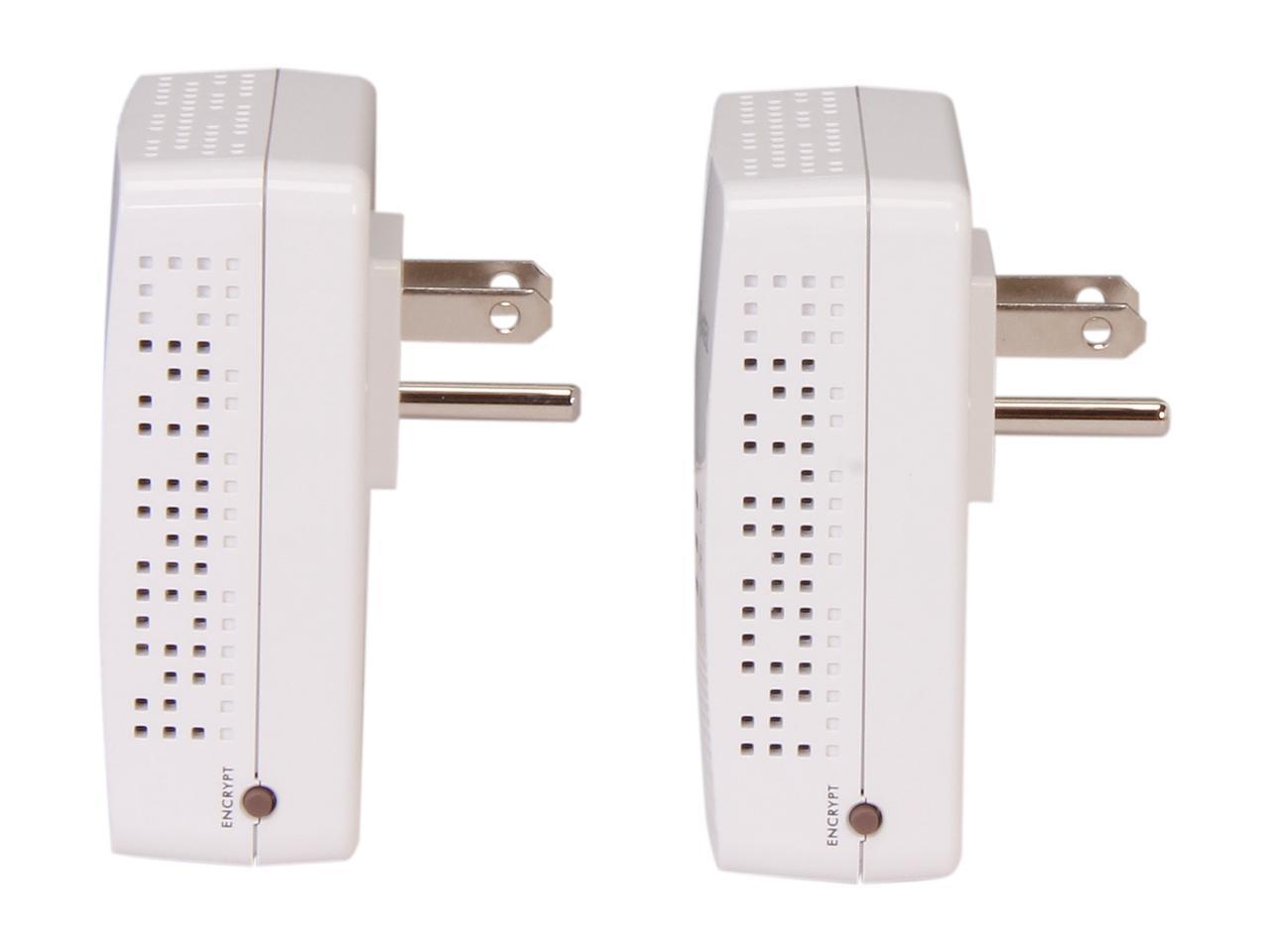 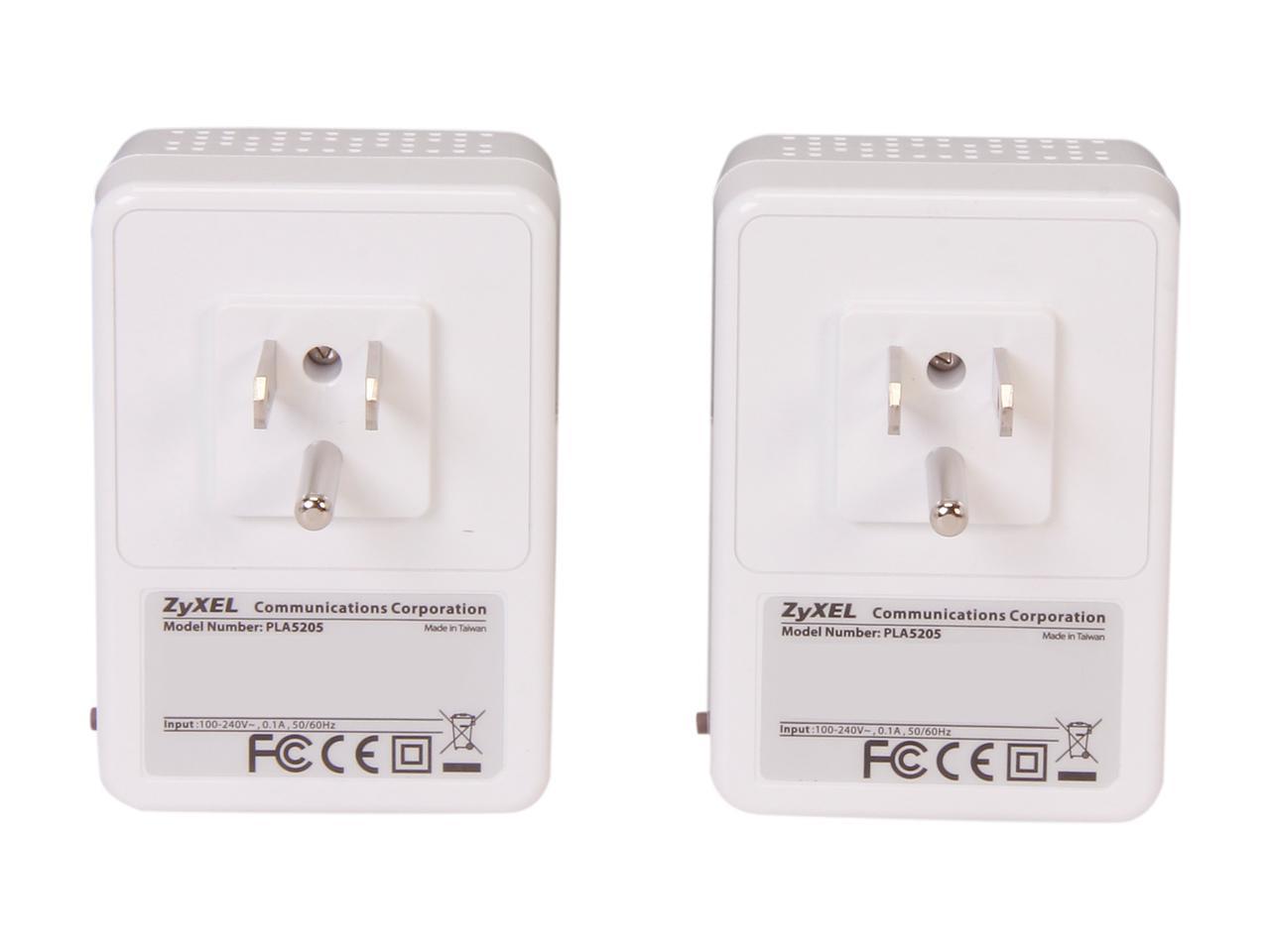 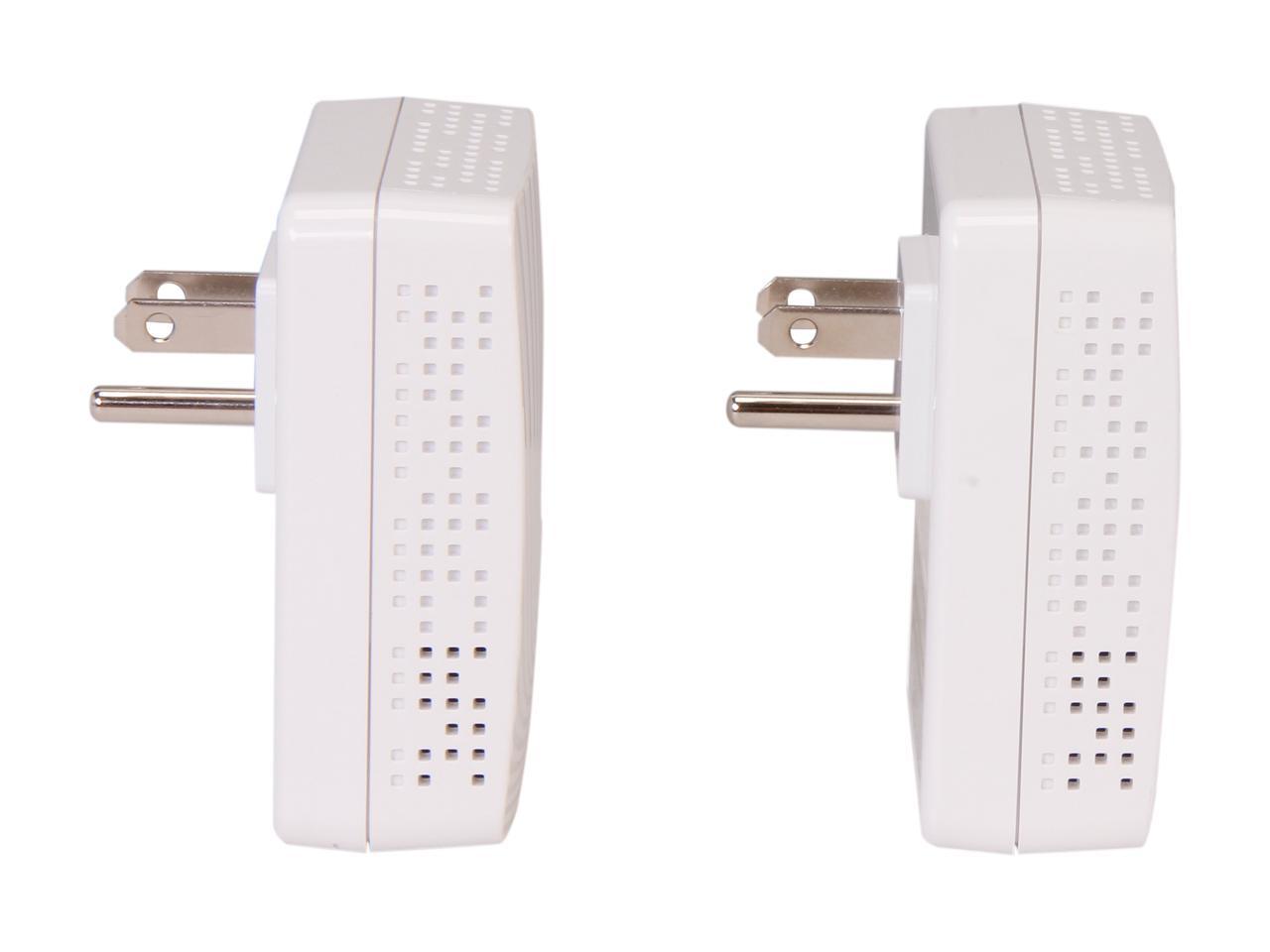 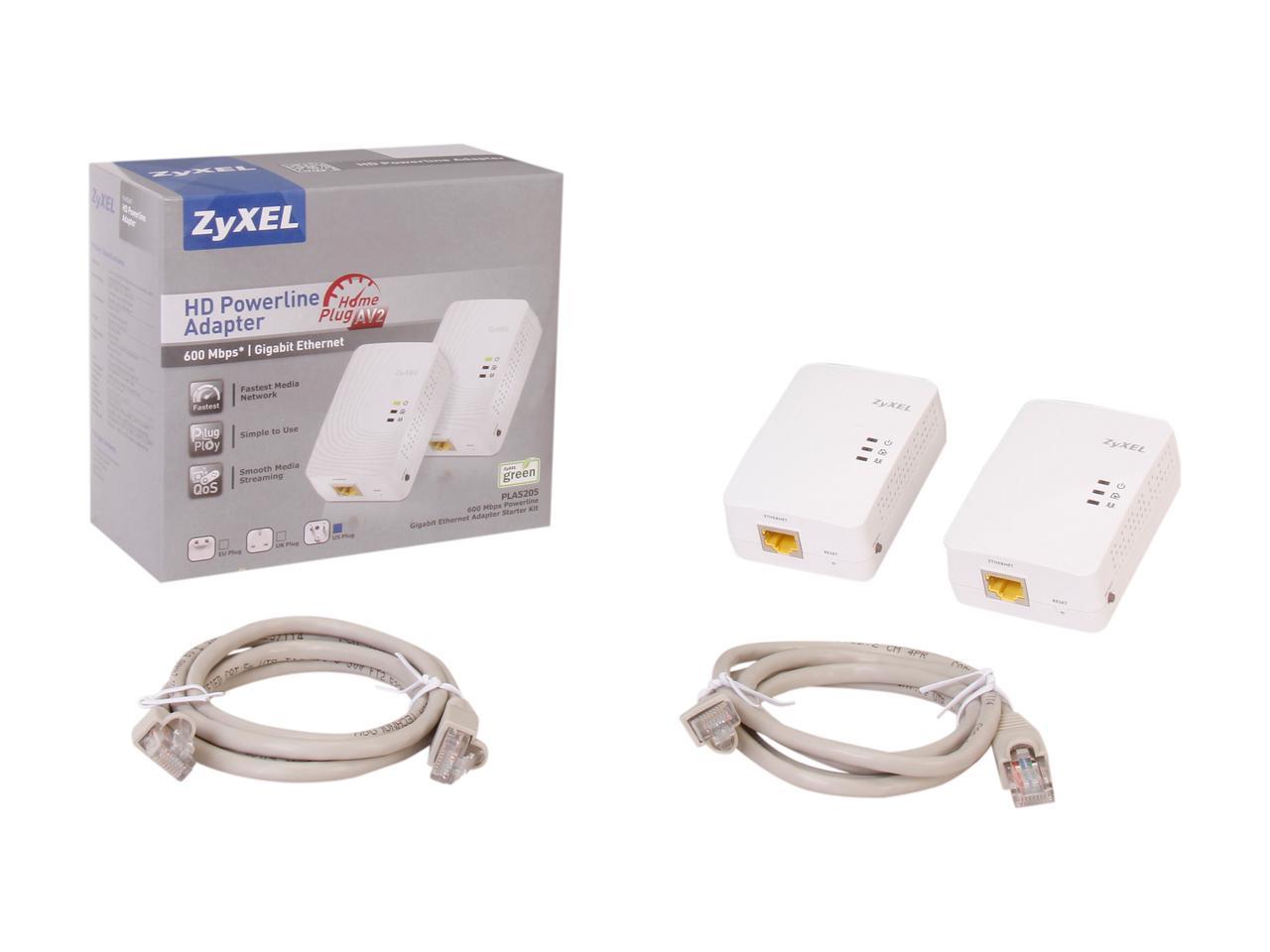 (19) Write a Review
In stock.
Ships from China.
Most customers receive within 7-32 days.
Overview
Specs
Reviews The ZyXEL PLA5205 600Mbps Powerline Gigabit Ethernet Adapter Kit provides the simplest and most effective way to expand your home network. Just plug in a couple of PLA5205 and improve your network performance by more than 20% as compared to 500Mbps powerline technology. You'll instantly see more stable multiple-HD media streaming, multiplayer gaming, and other network applications simultaneously throughout your entire home. Plug-n'-Play and Easy Security Setup
The compact size and versatility of the ZyXEL PLA5205 allows you to transform your home electric lines into wireless networks by simply plugging them in, all without having to block any of your existing power outlets. Data transmission of the PLA5205 is protected by its 128-bit Advanced Encryption Security mechanism that can be configured with the press of a button and without the need for any complicated setup or additional software.

QOS Feature for Enhanced Media Quality
The advanced Quality of Service (QOS) feature of the ZyXEL PLA5205 enhances the quality of multimedia streaming applications through its superior traffic prioritization capabilities. Whether you are enjoying HD video streaming, VoIP, or just high speed Internet access, the PLA5205 enhances the capabilities of all triple play services.

Fast and Stable Media Networking
Through its utilization of the latest HomePlug AV2 technology*, the ZyXEL PLA5205 Kit provides speeds of up to 600Mbps as well as backward compatibility with HomePlug AV and IEEE 1901-based products. Also, the Gigabit Ethernet capabilities of the PLA5205 ensure that it will provide a stable, high-performance network for simultaneous HD streaming, gaming and web browsing in every room of your home.

Save Energy with Power Saving Mode
When there is no active Ethernet link, the ZyXEL PLA5205 automatically enters its power-saving mode, consuming only 0.5 Watts of power. This green feature reduces energy consumption by more than 80% compared to adapters without this function and lets you not only help save the environment, but also save money on your electric bill.

*The theoretical maximum channel data transfer rate is derived from HomePlug AV2 specifications. Actual data transfer rate may vary between network environments with different distance, network traffic, and noise on electrical wires, quality of electrical installation and other adverse conditions.
**The SmartLink Plus feature is limited by the ground pin environments with different connectivity, distance, quality of electrical installation and other adverse conditions. Since the CE ground pin usage definition has yet to be clarified, SmartLink Plus is not currently supported on the EU and UK models. Learn more about the ZyXEL PLA5205KIT

Pros: Interoperable with older devices from different manufacturers - I have a set of Netgear XAVB5101's from last year, and once I set the security key on all 4 devices the same, they could all talk with no trouble. They even show up in the others' management software, and you can potentially change the security and QoS settings on all four at once (haven't tried it because I don't have faith in the software being interoperable, but that's just a personal feeling). *Higher average throughput - Easily get better than Fast Ethernet speeds between the two AV2 devices while they are spread throughout my home (average 180-220Mbit). When they are in the same room, they get very close to their advertised limit of 600Mbit (maxed out at 440Mbit). Connection speeds to the AV1 devices (which themselves have an advertised theoretical rating of 500Mbit) usually settles around Fast Ethernet speeds (though in the same room I could get around 330-380Mbit, which also isn't too shabby). With all four devices spread throughout the home, I'm comfortable getting Fast Ethernet speed all the time. *More stable connection - whenever I would turn on a high-power use device (like my dryer), the older devices would go into fits of resetting, and the connection would suffer. These newer adapters don't even blink with the high power draw, thanks to the newer HomePlug AV2 standard. Having these newer devices allowed me to move my older AV1 devices to better outlets, so I'm getting the best out of both sets.

Cons: Management is a pain in the rear. The auto-secure button doesn't want work across vendors; if I try to use it on all four devices, I end up with two different networks (one Netgear, and one Zyxel). This forces me to use the management software. Like I said, the Zyxels show up in Netgear's management utility, and vice versa, however all 4 devices must be talking with the same security key before they'll recognizie one another. This means you have to use both utilities with their respective devices to set the key initially. I don't think this is intended (the security is supposed to be interoperable like the rest of the standard), so its probably down to the management software themselves. Also, even though I'm plenty happy with the speeds and reliability of the connections, they are still far below the advertised rate. My home is a new construction, so the wiring is new and follows all the modern standards, yet I can only get close to the advertised speeds by being in the same room with adjacent plugs. I understood this before I purchased, so I won't dock an egg. A small part of me is hoping that firmware updates in the future might improve this (they certainly did with the Netgear devices), but I'm not counting on it.

Overall Review: With each new year, the Powerline network devices get faster and more reliable. These devices are probably the best I've ever used, and I am very satisfied with the network they provide me. When I built my home, I could have gotten Ethernet wiring installed, but the builder charged an outrageous amount for the option, and they wouldn't let me install it myself for liability purposes. Even with a newer router, wireless is spotty at best. These Powerline devices give me a stable wired network, at Fast Ethernet+ speeds with almost no work on my part. When you purchase these, you have to understand that the speed you are going to get will probably be far below the theoretical maximum. You should expect this going into the purchase, because this is true for pretty much everything out there that has a maximum speed listed. Sure, Wireless-N may outperform these in speed, but these devices can let you expand your home network to basically anywhere with virtually no effort, and (at least for me) the average connection speed is more than adequate for my needs.

Pros: Easy to set up and a quick e-mail to ZyXEL resulted in some help to get older ZyXEL models to "talk to" the PLA5205 units. Customer service could not have been better.

Overall Review: I own several PLA5105's and since they are Homeplug AV instead of Homeplug AV2 like these units, I needed to do a firmware update on the old units. No, they don't communicate at AV600 speeds since they were only designed for 200, but it allows me to start converting to the faster units without breaking the bank by having to replace all 5 at once. For anyone who says these don't communicate with the older units, perhaps you need to (1) read more details and/or (2) contact customer service.

Cons: Best I could get on the same electrical circuit was 80Mbps.

Overall Review: Overall it is a good product. I am able to stream from a roku device in a remote portion of the house. I tried to place a swictch on the receiver side and split to a Wifi AP, but the 80Mbps really limits this. This is not a fault on the product.

Pros: These *are* indeed interoperable with the older units

Cons: none so far - they work fine

Overall Review: After more messing with the configuration program, I was able to get the older units to communicate. I apologize for jumping the gun. User error :^(

Pros: more than doubled my network speed. bought this to stream bluray, I have a couple of zyxel and trendnet powerline 200 AV adapters, and they are around 30 to 40 mbps, which still cause stuttering sometimes. With this new AV2 plugged into the same outlet, I am getting close to 90 mbps, and mixing AV2 with AV 200 seems fine, maybe only a little bit decrease in network speed.

Pros: It does the job. I needed something reliable. I had previously used a wireless connection that was unreliable and instead of shelling out money on a new router I decided to do with this and it does this job just fine. My connection does not drop.

Cons: Horrible sound interference from adapter. At first I thought my headset was broken but it happens with my speakers too. After some research this is a problem with powerline adapters. They emit some type of interference and the companies don't really build them properly to prevent it. This causes terrible buzzing/clicking/humming sound. I bought a new headset recently and I thought the headset was dead on arrival but after simply unplugging my powerline adapter the sound horrible sound went away. If you're using this for another room like just for netflix I imagine it would ruin the purpose of this product like it is for me.

Overall Review: I can't really use the product for gaming or for anything related to sound. The interference is worse with headsets.

Cons: For me the included ethernet cords are useless (too short).

Overall Review: The Zyxel pla5205kit more than doubled my download speed! I highly recommend this product!

Pros: -More stable connection than wifi -Very easy to setup, just plug and play -Can get the full speeds if placed correctly in the house 90mbps down / 12mbps up

Cons: -Cannot be used on powerstrip, too much electrical interference.

Overall Review: -You will have to understand how your electrical wiring works in your house. try different combinations of the outlets, some outlets are wired longer, or further away from each other which would give a weaker signal or slower speeds.- -Do not plug into a powerstrip because there will be too much electrical interference. -Been working for me for over 3 years and have not given me any issues or problems. -I wonder if it will survive a power surge/outage since its plugged directly to the wall.