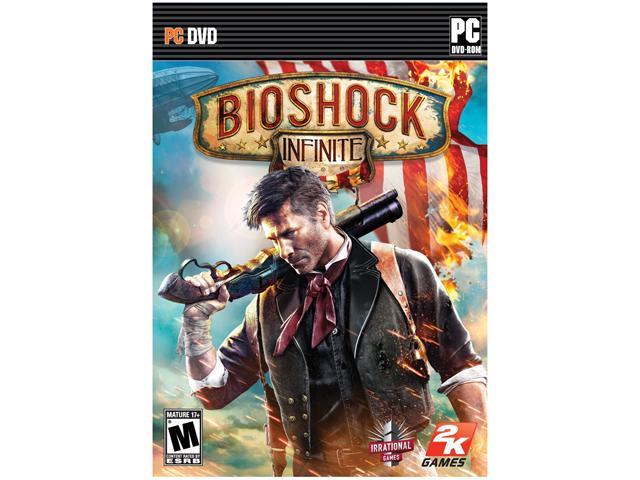 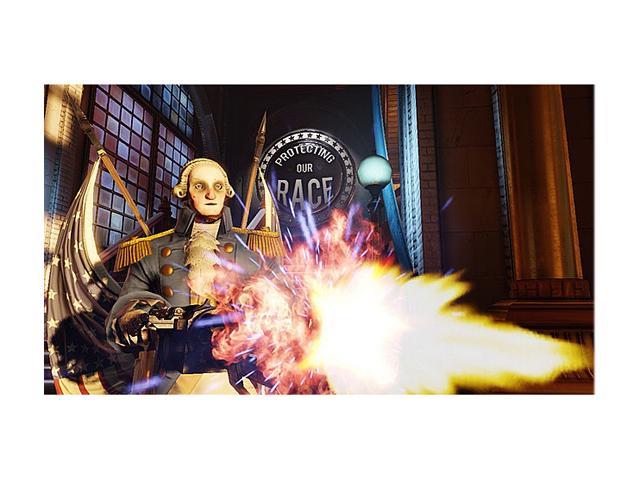 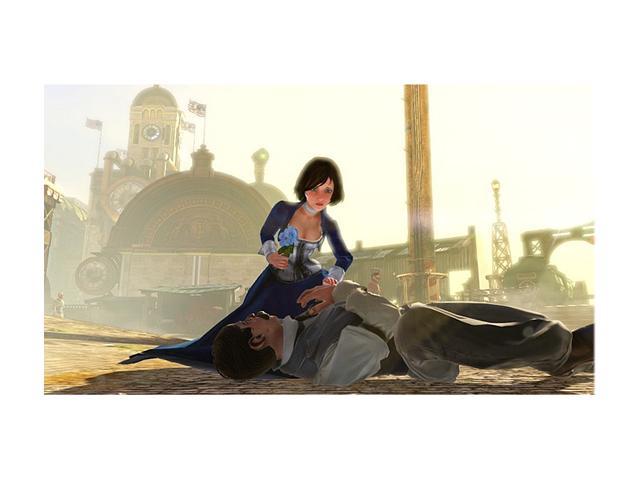 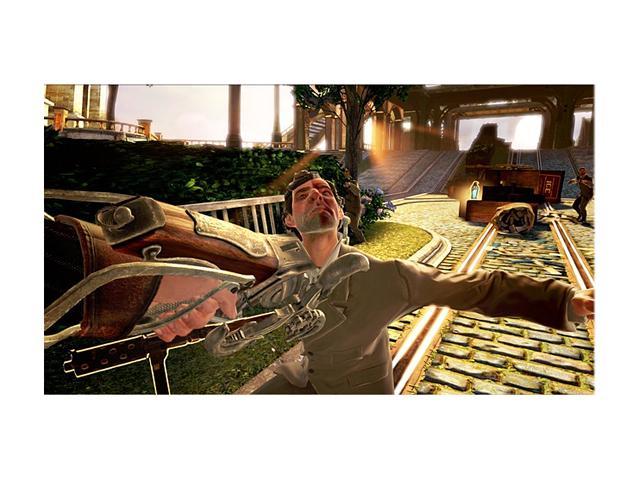 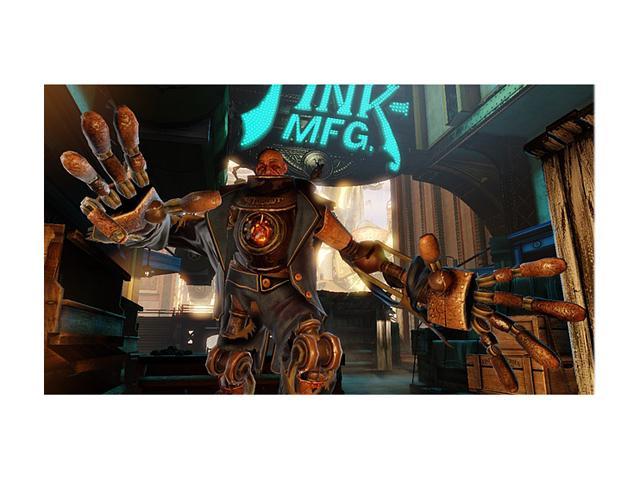 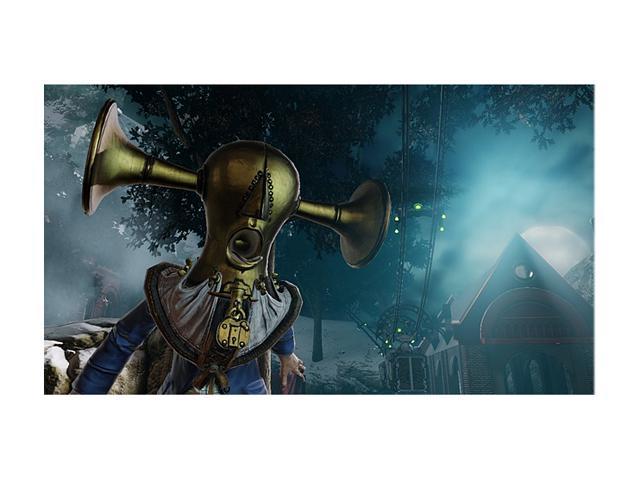 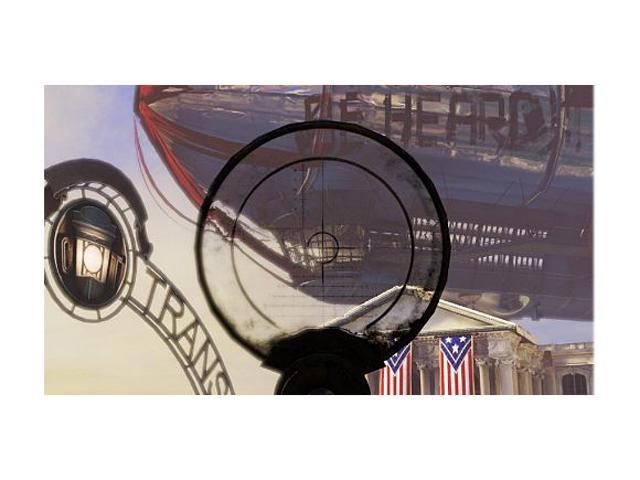 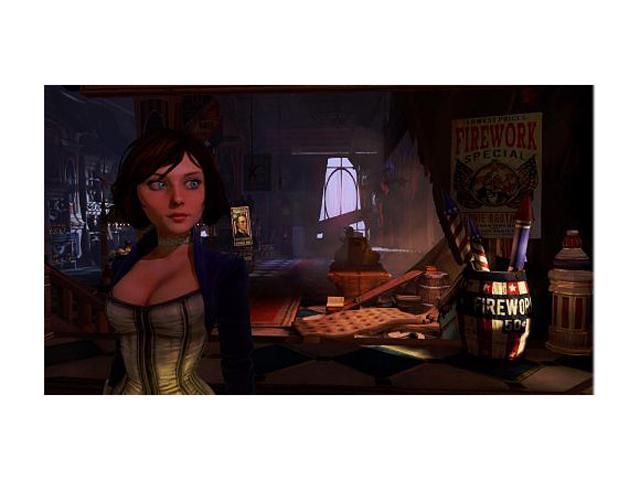 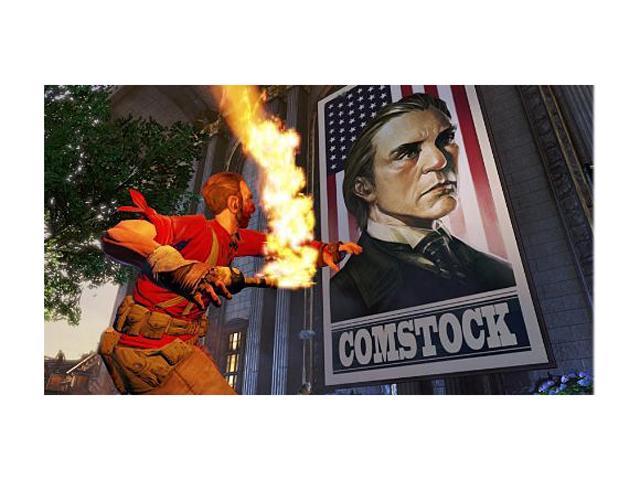 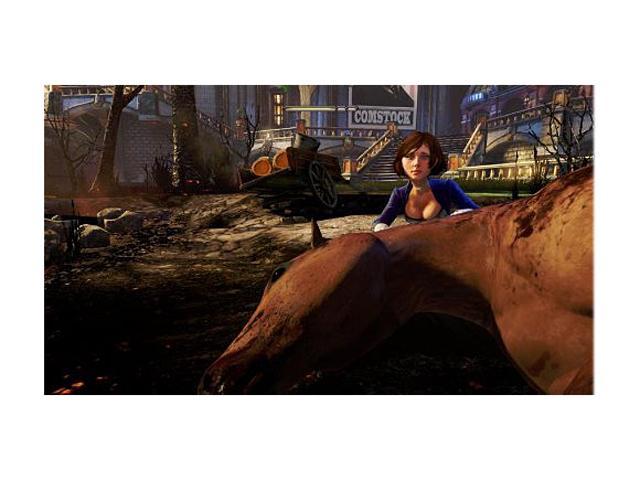 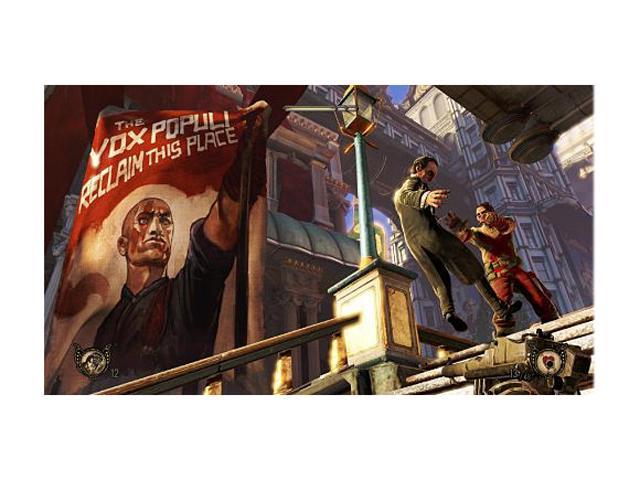 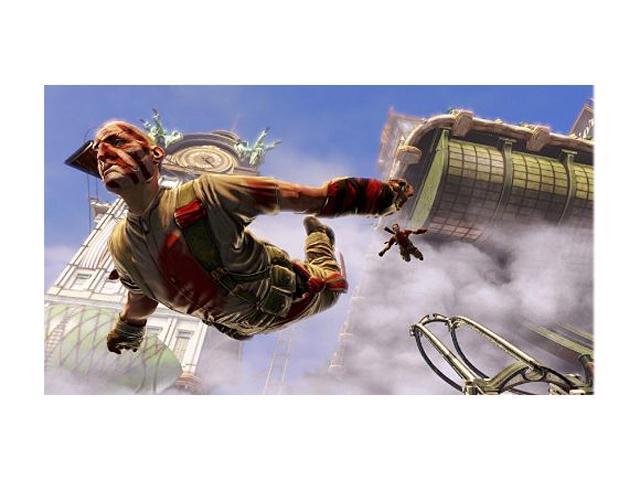 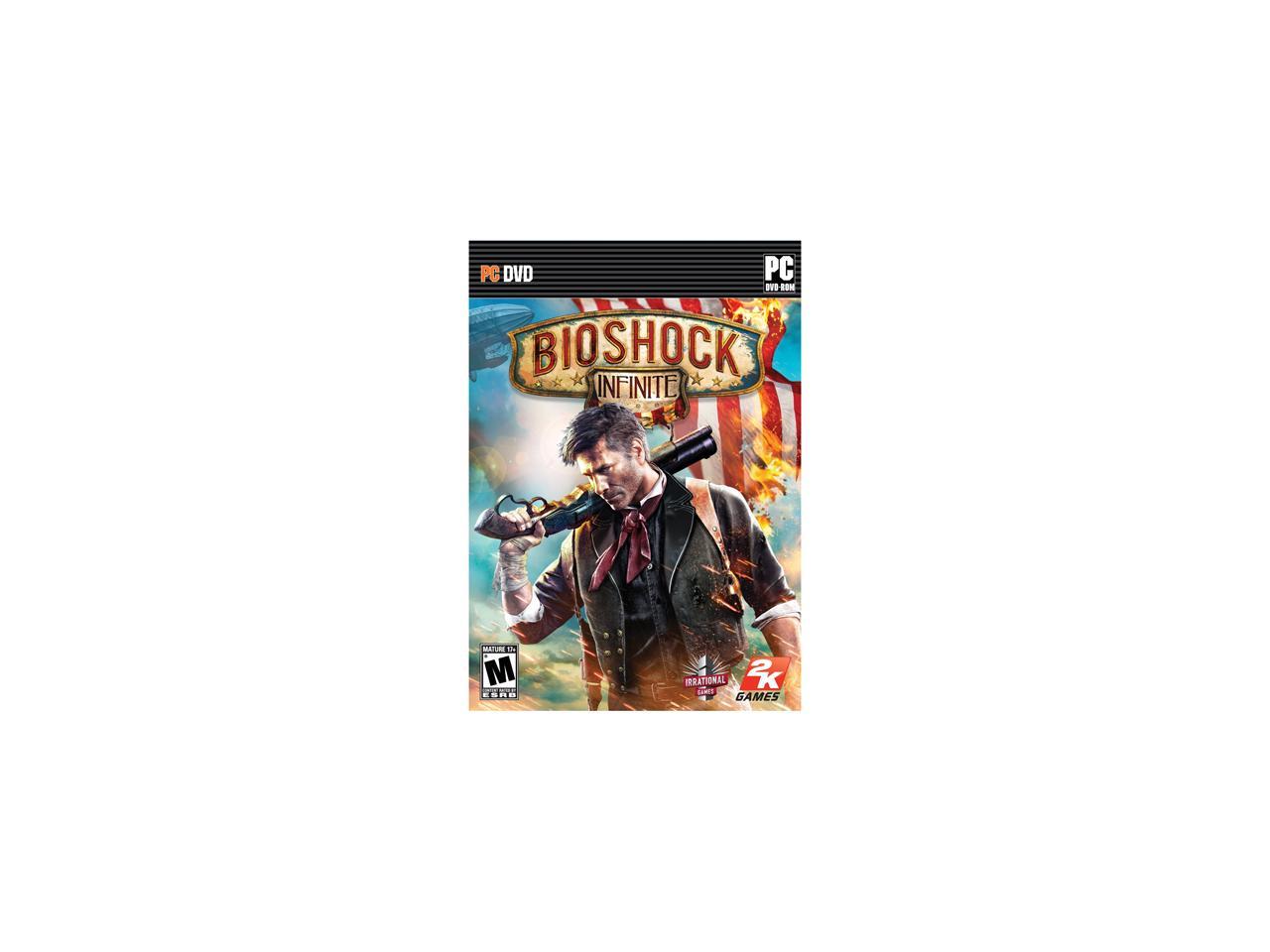 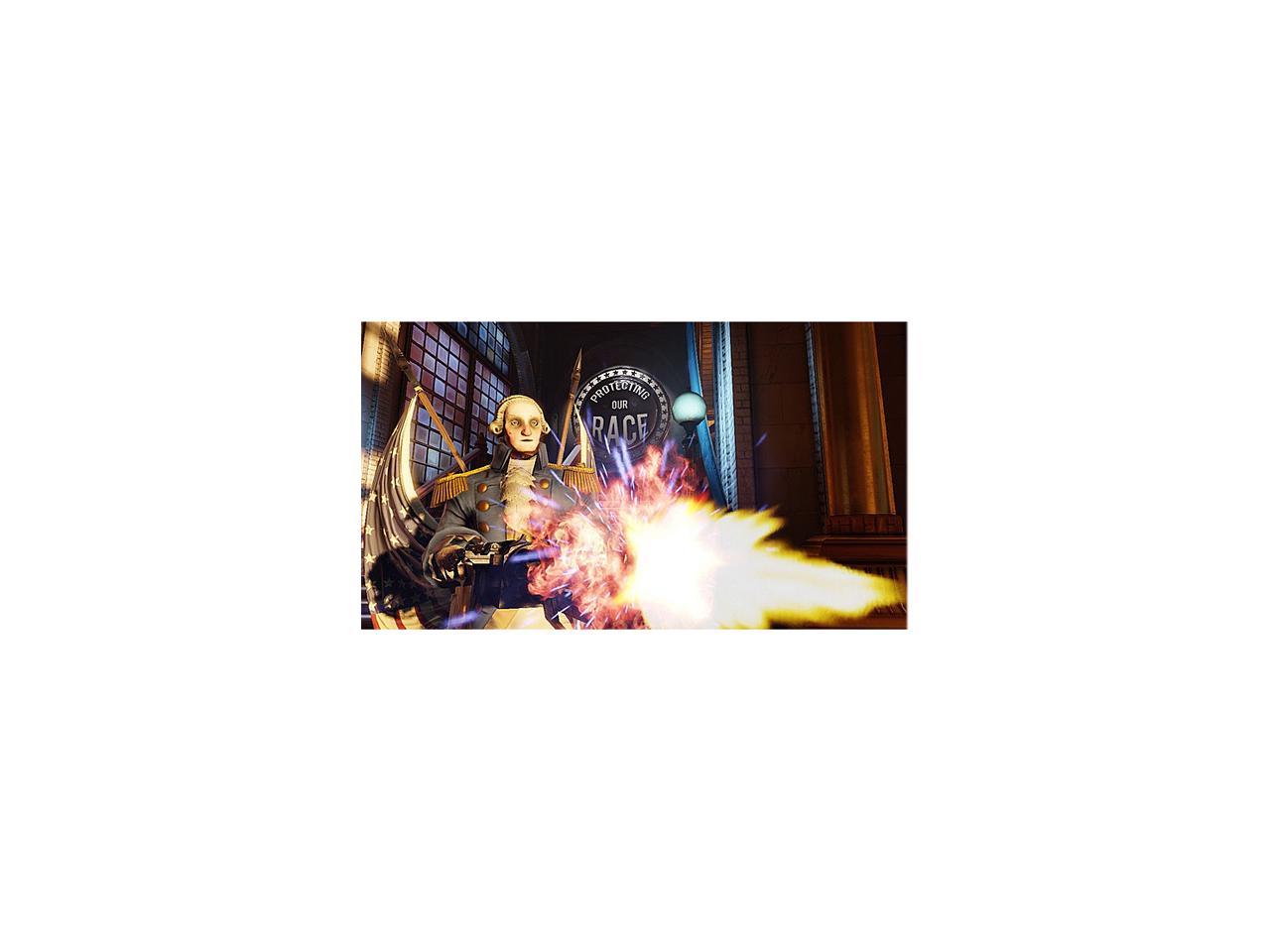 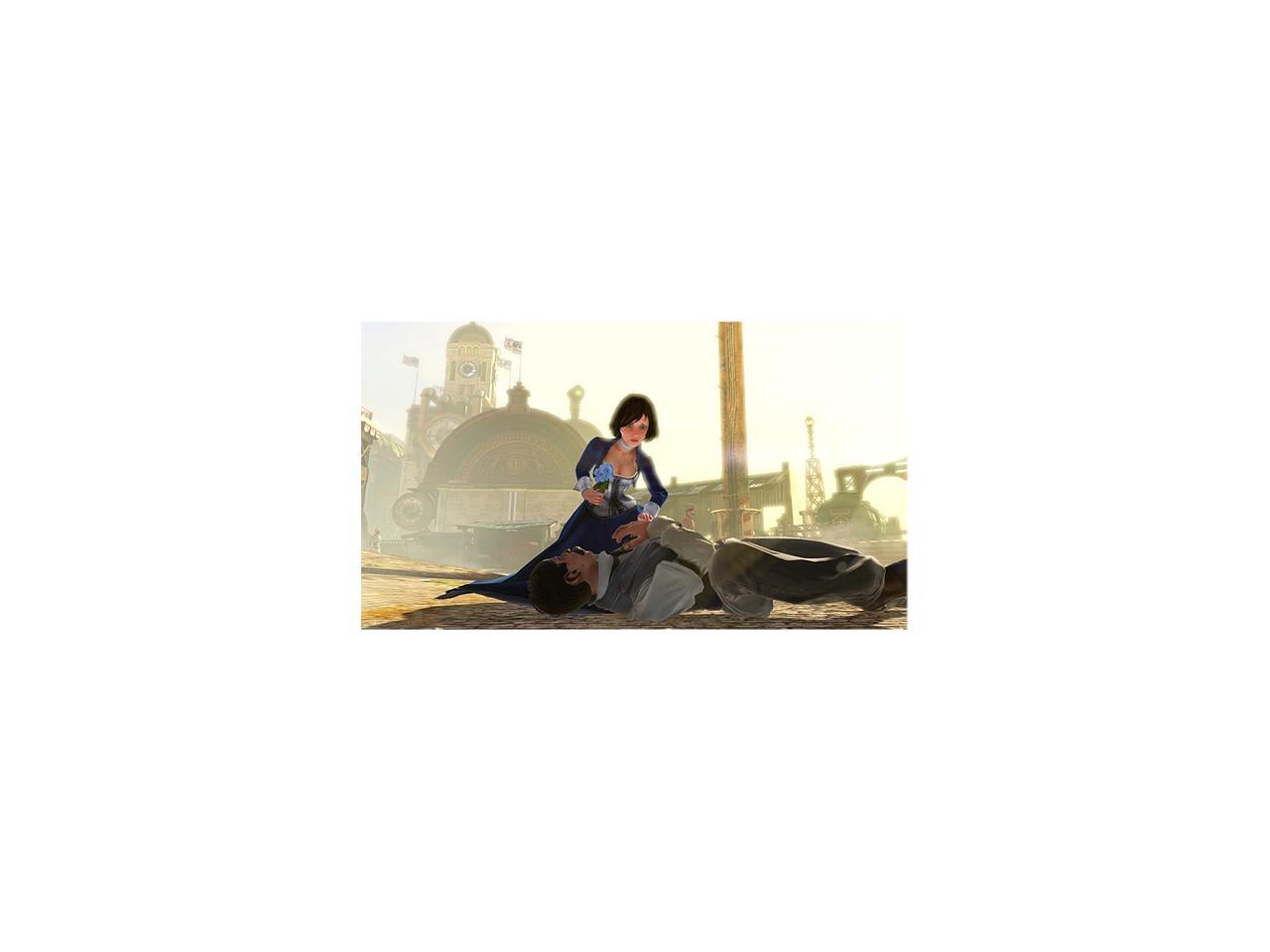 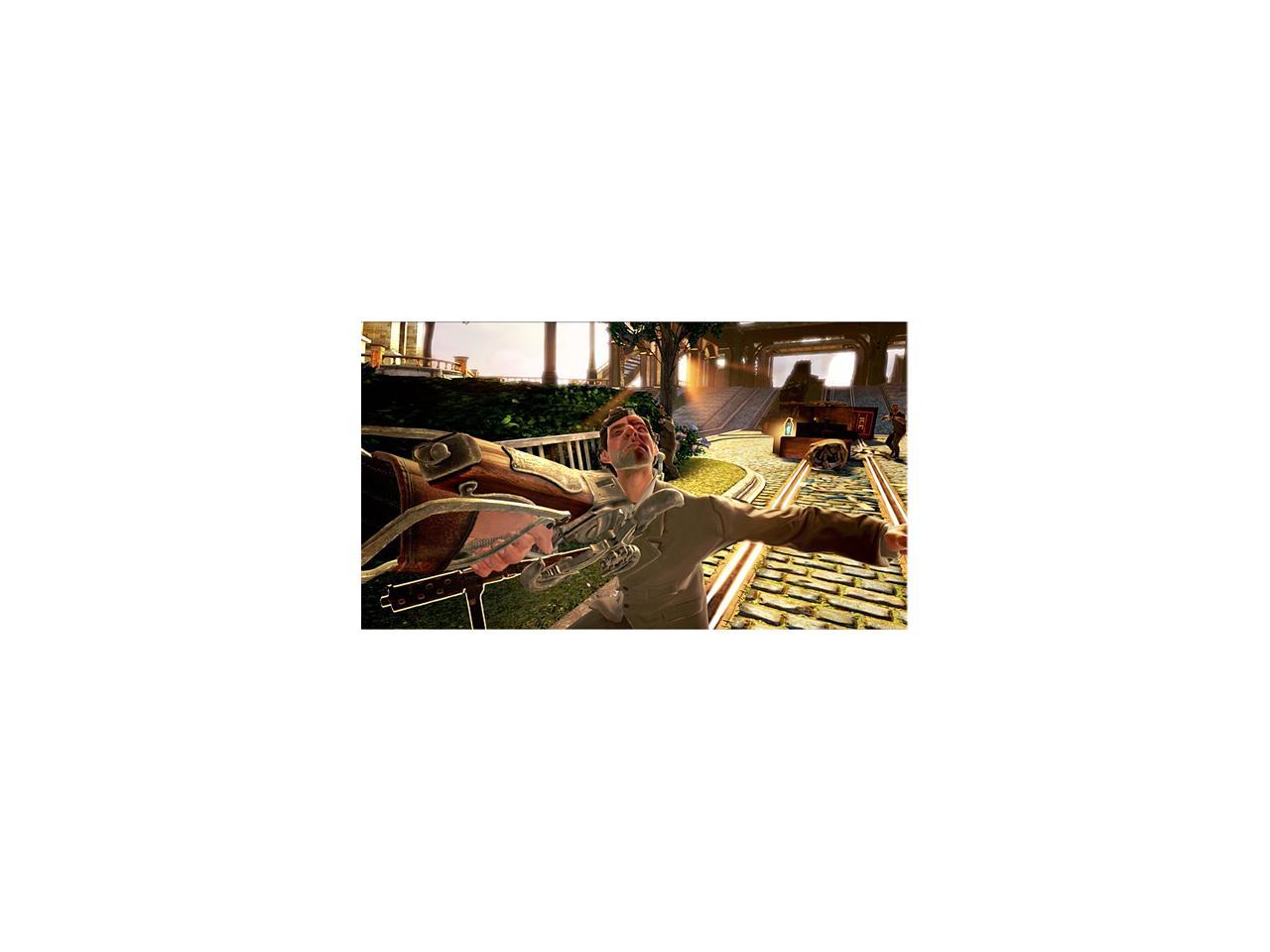 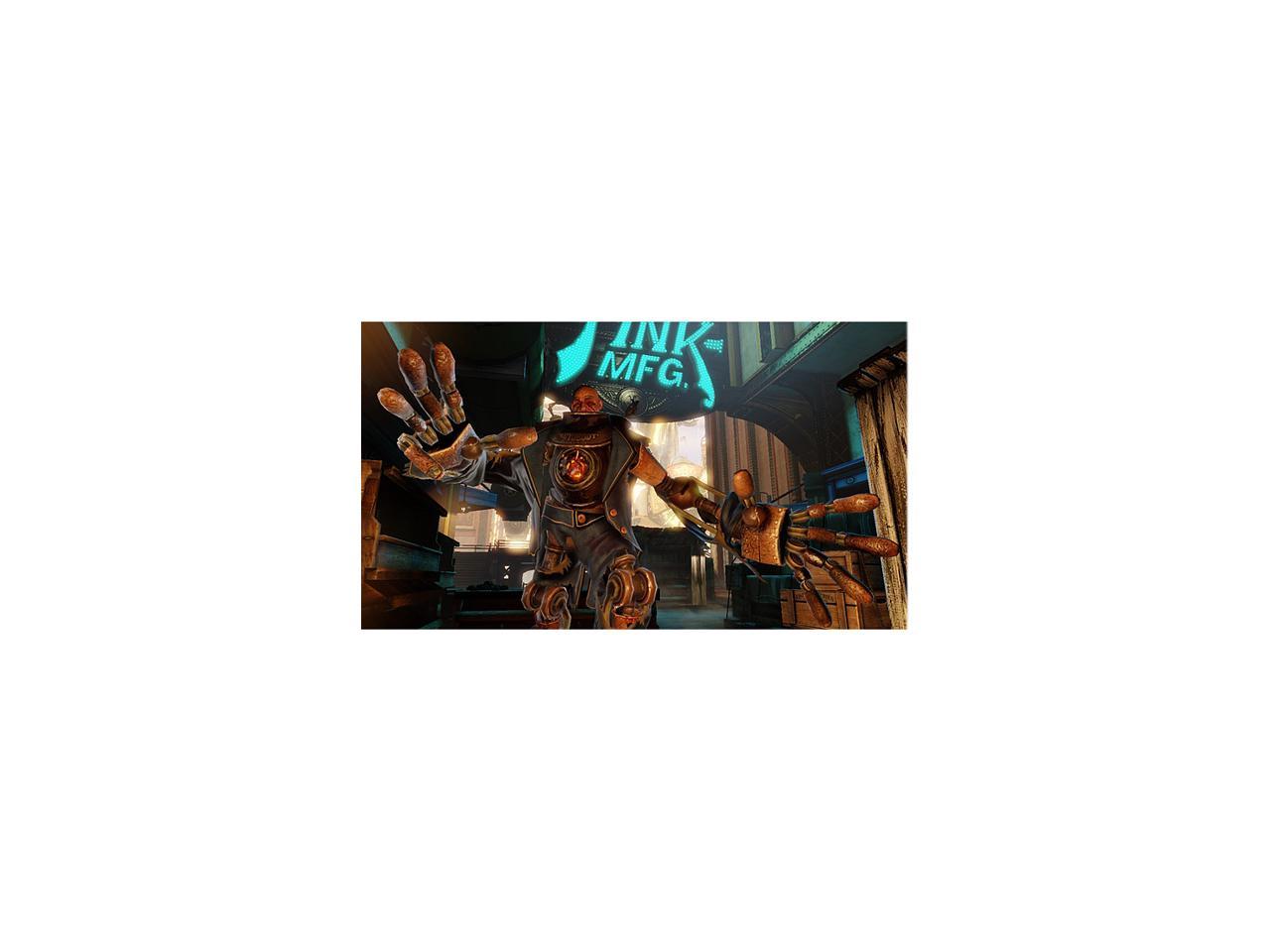 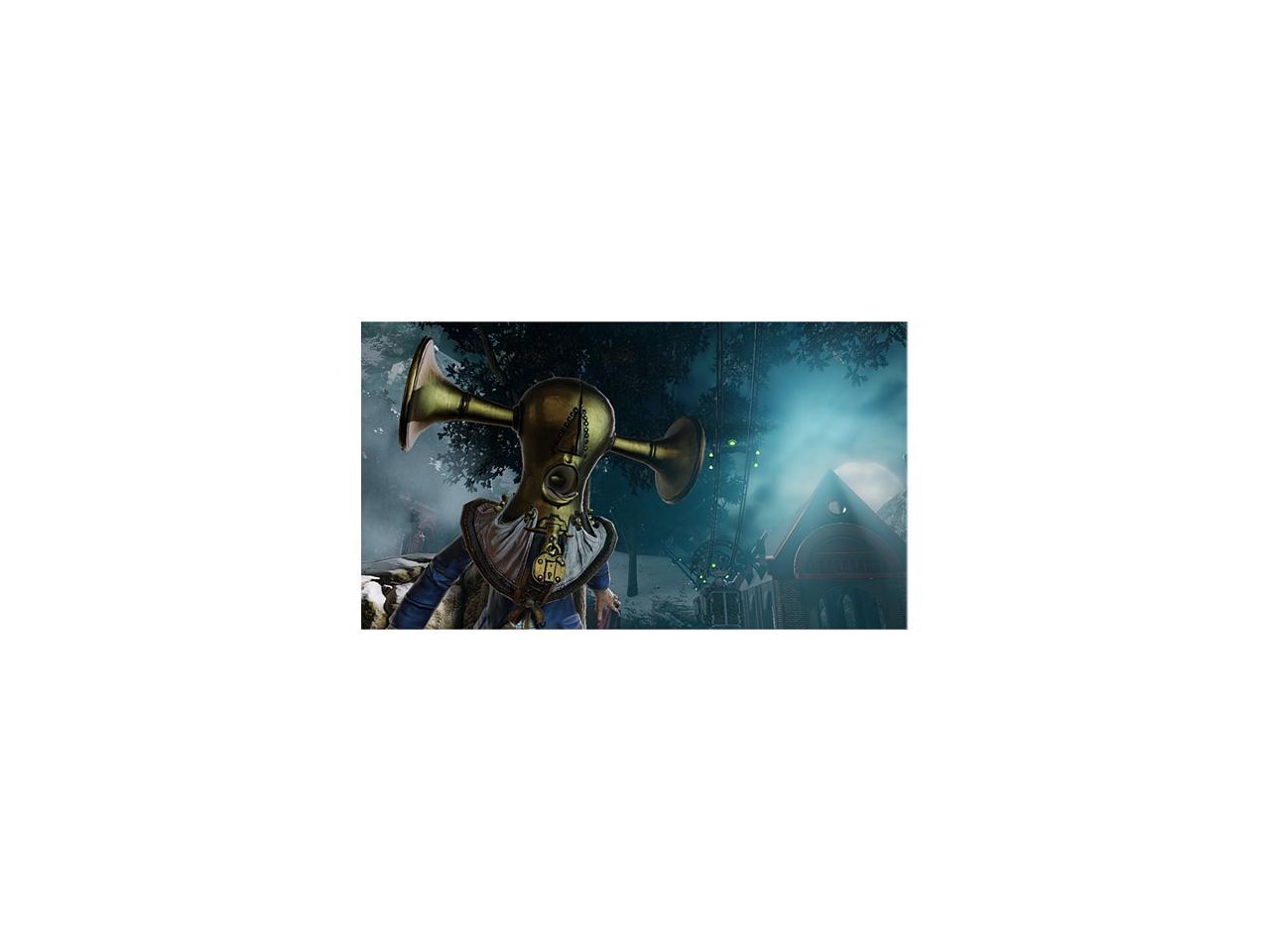 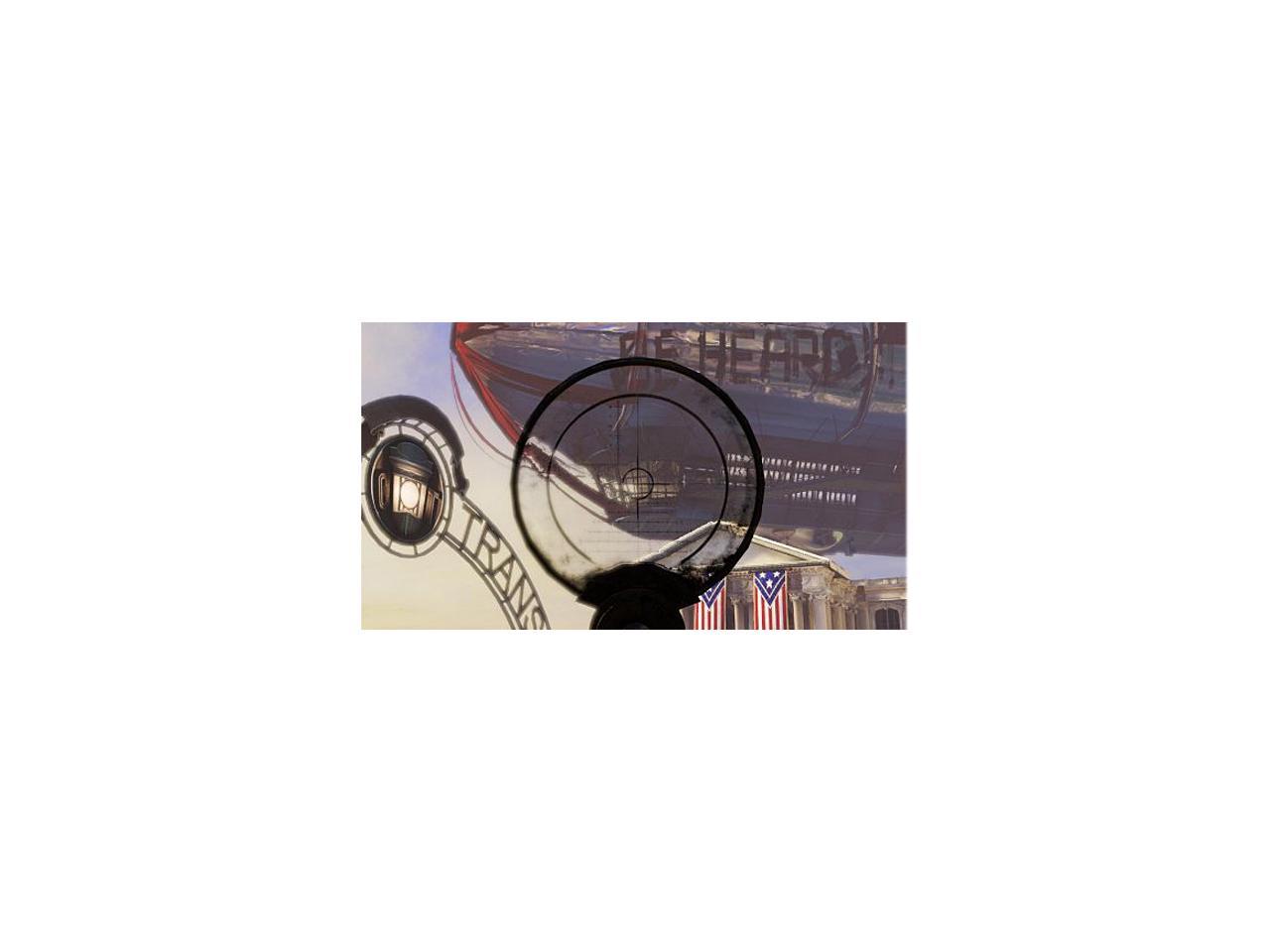 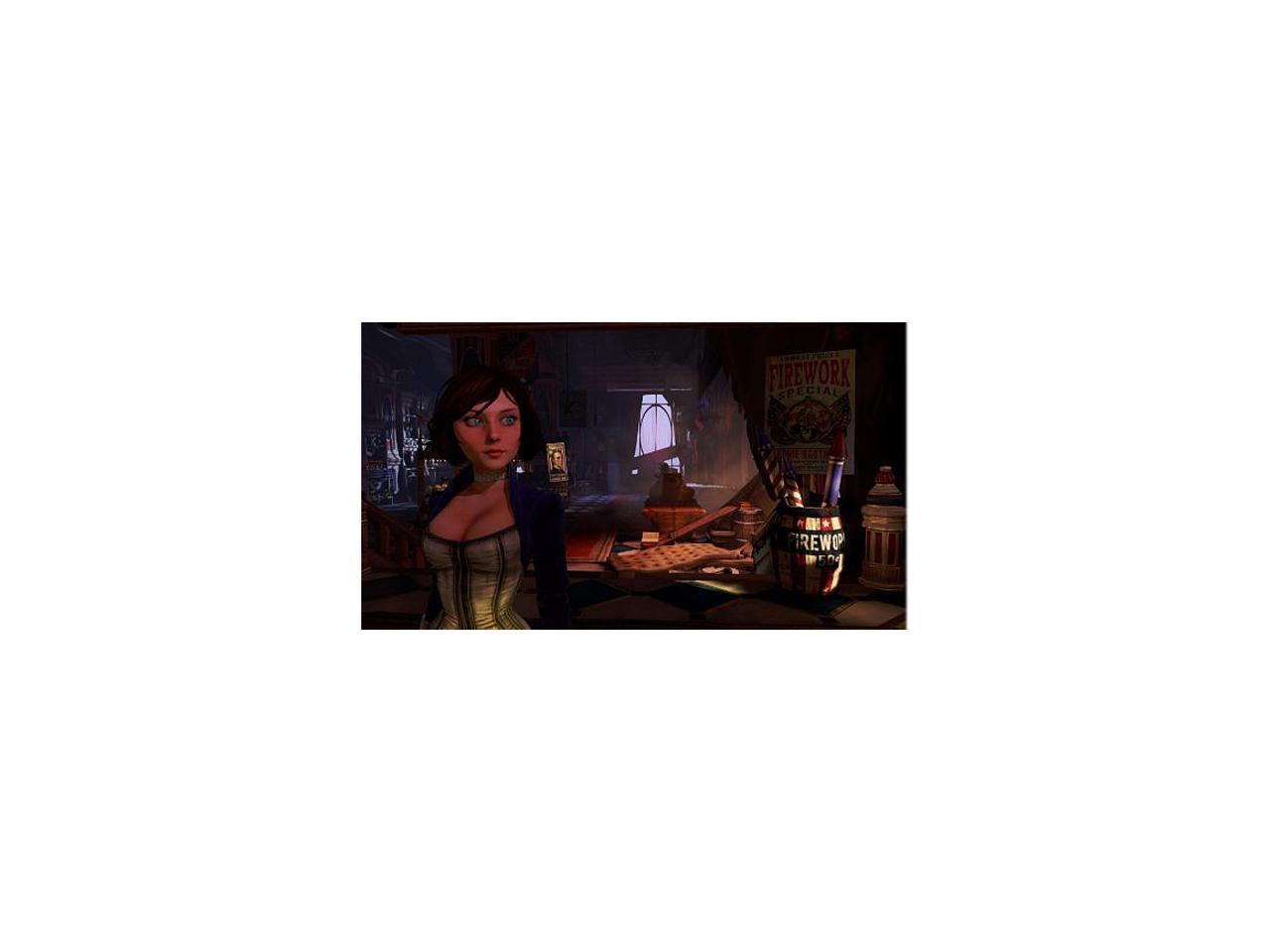 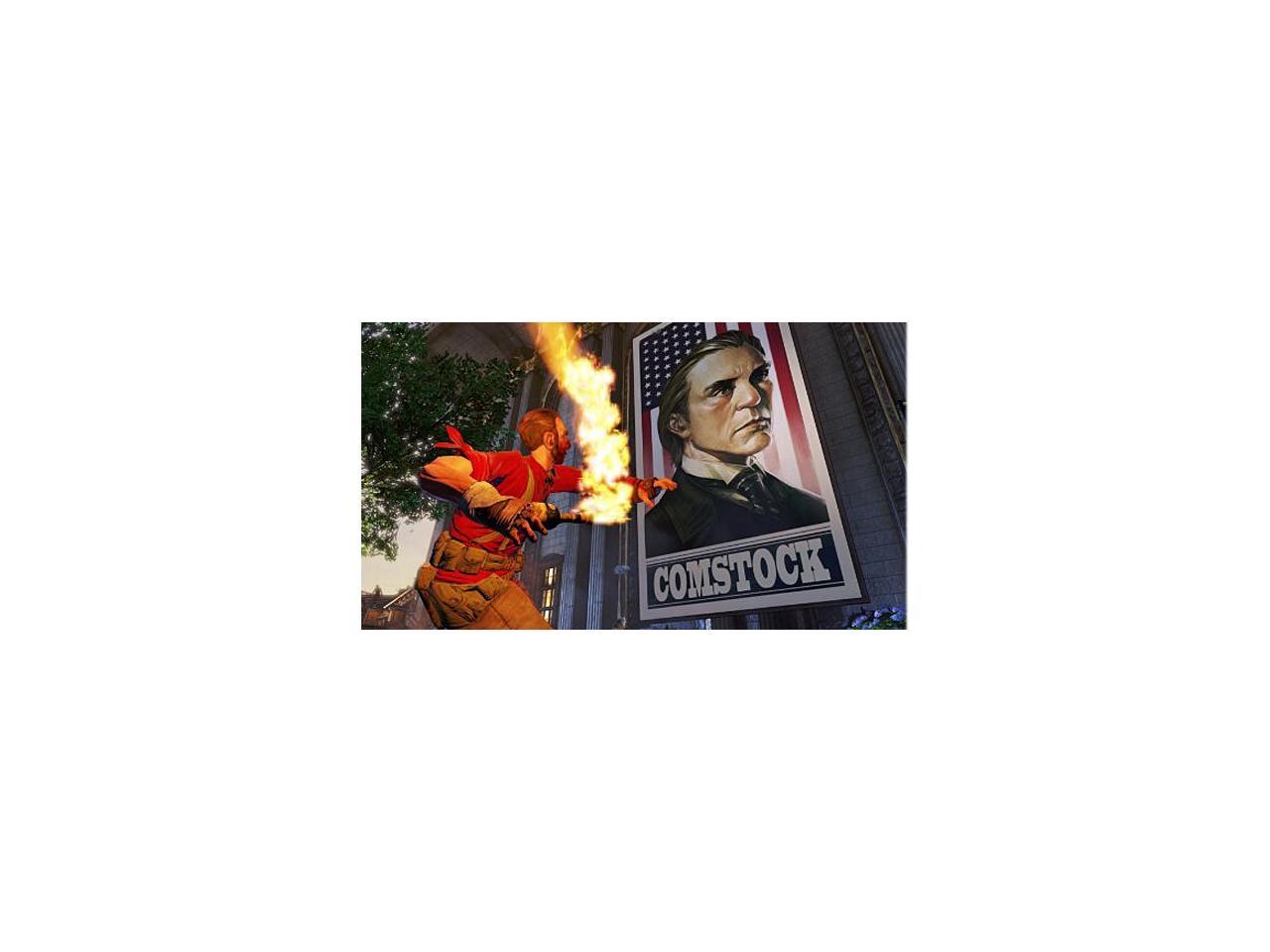 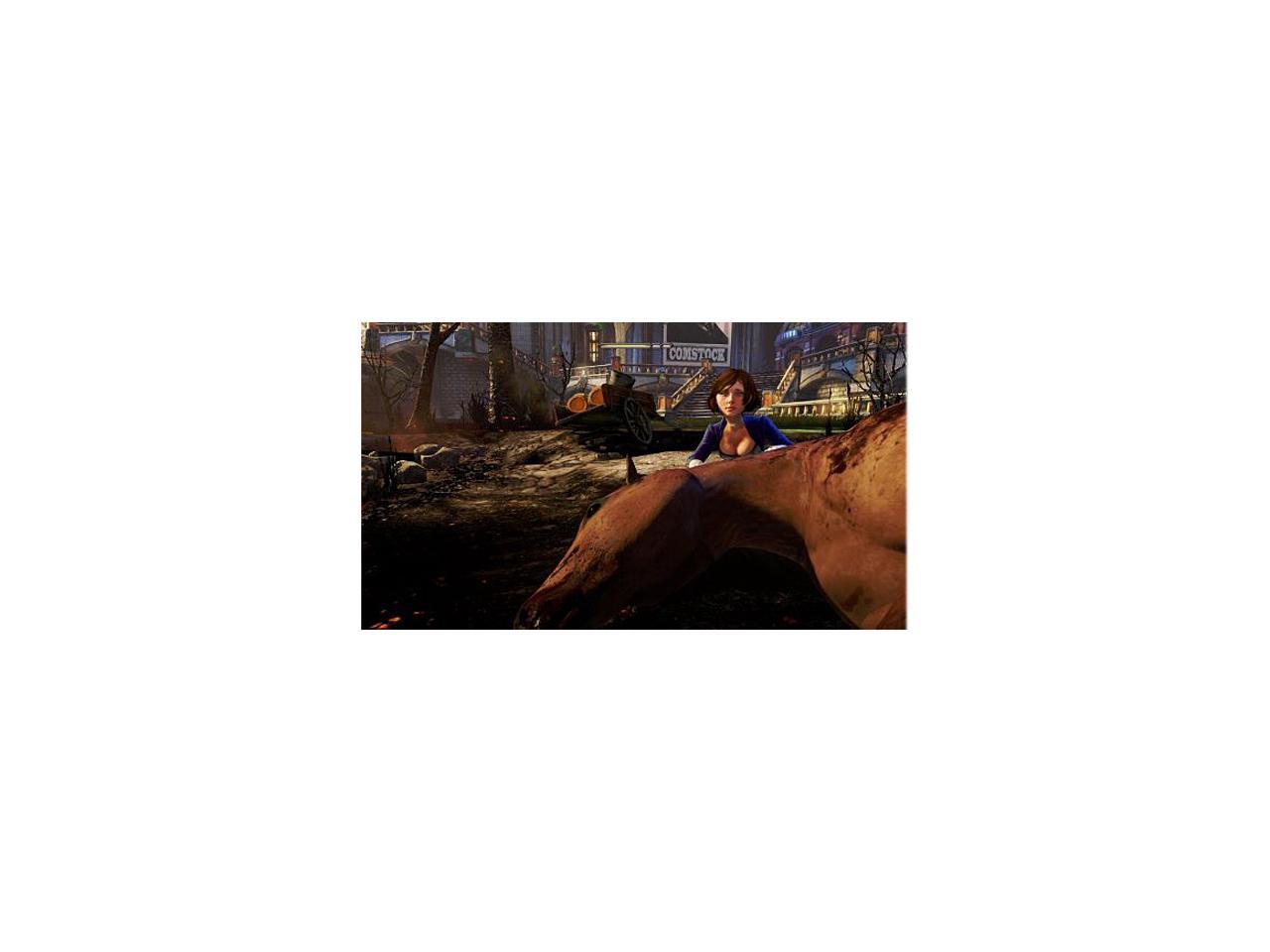 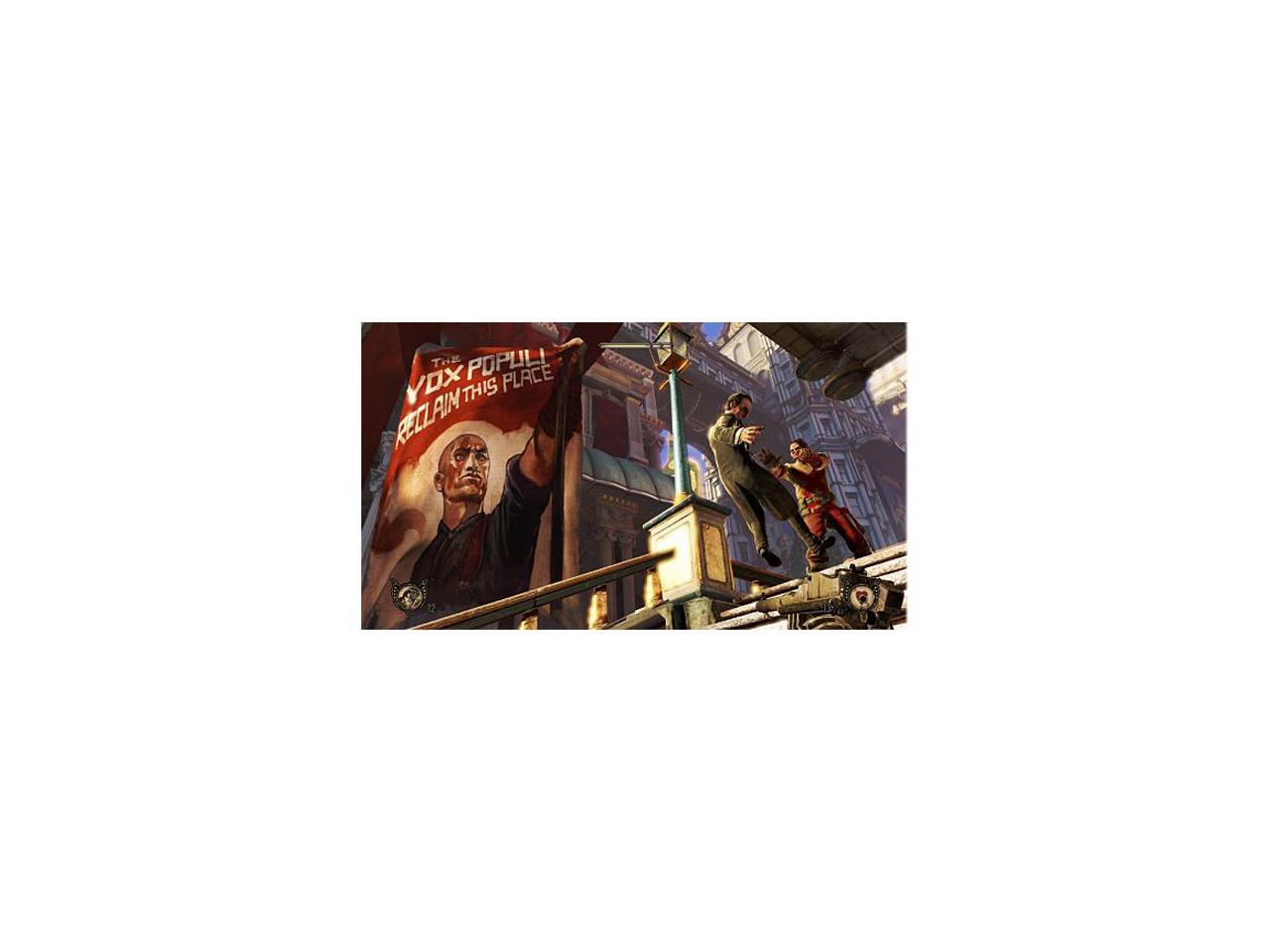 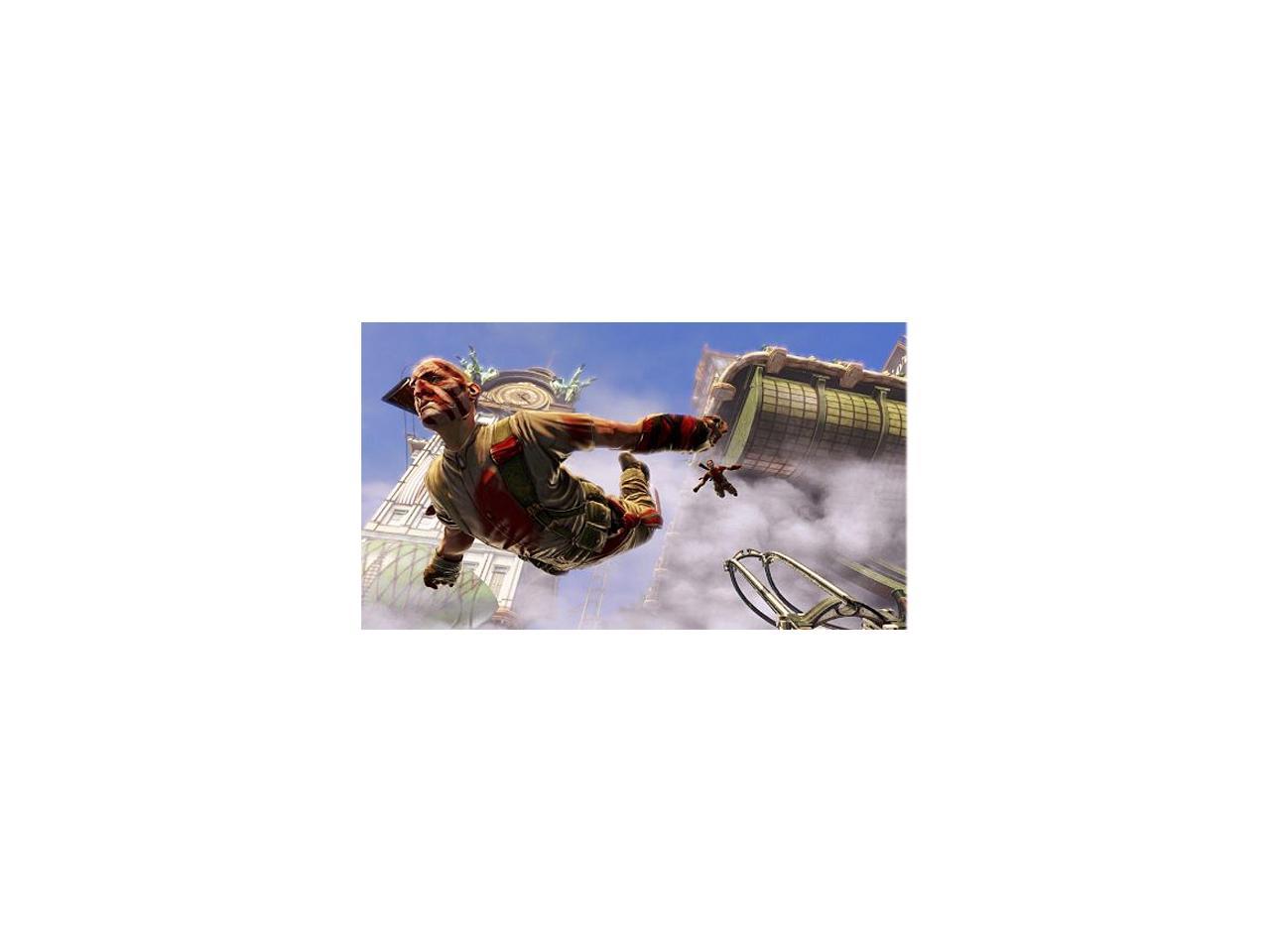 
BioShock Infinite is a first-person shooter developed at Irrational Games, the studio behind the original BioShock. Set in 1912, BioShock Infinite introduces an entirely new narrative and gameplay experience that lifts players out of the familiar confines of Rapture and rockets them to Columbia, an immense city in the sky.

Indebted to the wrong people, with his life on the line, veteran of the U.S. Cavalry and now hired gun, Booker DeWitt has only one opportunity to wipe his slate clean. He must rescue Elizabeth, a mysterious girl imprisoned since childhood and locked up in the flying city of Columbia. Forced to trust one another, Booker and Elizabeth form a powerful bond during their daring escape. Together, they learn to harness an expanding arsenal of weapons and abilities as they fight on zeppelins in the clouds, along high-speed Sky-Lines, and down in the streets of Columbia, all while surviving the threats of the air-city and uncovering its dark secret.

Learn more about the Bioshock Infinite

Pros: Nice game. It's the first time I am playing a Bioshock game and was impressed with the experience. The story was not bad at all even though I didn't get a few parts, but I guess if I replay it then I might figure it out. The thing that stood out the most to me was the fact that there were no vulgar expletives. I like to play a game and enjoy the story without having my ears being drench with cussing all over. P.S Crysis 3 has a bit of cussing so if you don't like the cussing…..well, you are warned.

Cons: Now contrary to what some may conclude about the game's graphics being stunning, in my opinion the graphics aren't stunning nor amazing. I can see a console player feeling that way but a pc gamer who's accustom to very high or ultra graphics at 1600, 1080P or higher resolutions knows that there is no way the graphics are stunning. The graphics is good but not amazing or stunning. If you want stunning get on a gaming pc and go check out the Mass Effect series especially part 3, any of the Crysis games especially part 3, even older games such as the second Time Shift or even Darksiders had way better graphics. I will say though that for me where the graphics fell short, the story and interactions made playing the game well worth it. Overall a great job done on a decent game.

Pros: Great game. I highly recommend it. The combat is top notch and you actually have an intelligent AI that helps you out in tough situations. The story is what really grabs me though. As for Newegg, they were tremendous. They had a promotion where if you pre-ordered Infinite you save ~15% and I said, well of course! Got the game for around $35 brand new. I also liked the reversable box art. Arrived on my doorstep in just a few days time.

Cons: None really, just make sure you have a DVD drive and a steam account obviously.

Pros: Gripping story-line plus great game play. I've not played through a lot of games, but this one by far is my favorite story line. I would catch myself playing 2-3hrs at a time just because I had to know what was going to happen.

Pros: Played this game a number of times now. It's amazing in oh so many ways. One of the greatest games I have ever had the pleasure of completing.

Cons: It does not last for infinite hours.

Overall Review: I got the season one DLC pack. Loving these new additions now =)

Cons: not the best gameplay, however far above average

Pros: for the game there are so many to list

Cons: the only con I have for this isn't even in the game, but in the fact that the shipping for this game is a joke. If you want to play this game set aside about a month for shipping, I may be imagining a bit but it really does take a long time. The only reason I got it from new eggs because they gave me $20 gift card after buying a new process. if you don't feel like waiting a long time I recommend just going to your local game store and buying it there.

Pros: Lots of fun! The scenery is phenomenal. Great gameplay - very similar to the other Bioshock games. Very customizable graphics settings. Compatible with older cards. Challenging only at the more difficult settings - the recommended (medium) is easy for FPS veterans.

Overall Review: To the entitled reviewers who cant patiently wait a few days after the release date for a pre-ordered game to be shipped to you... next time use common sense and pre-order w/download.

Pros: I heard the game is fun

Cons: I bought the DVD version of the game rather than the digital download for several reasons. First, I wanted a hard copy to keep forever just in case something happens and 2k games or steam, or any of the other software providers shut down their DL servers. Second, I wanted a faster install. Third, I didnt want to have to deal with steam. Fourth, I actually enjoy having a physical case, dvd, booklet, etc. Unfortunately, despite the fact that I have 3 DVDs with the game installation files, I was forced to download from steam. WHYYYYY? It says "installing: 48 minutes 51 seconds remaining." I could have installed from the physical disk in my hand in 2 minutes. Why force me to install from steam? I have a lightning fast computer with an ultra fast connection, and the "48 minutes just jumped up to 144 minutes." I guess Steam has a lot of traffic right now, so my DL speed is suffering. great, while i'm waiting for this 2+ hour install to finish, steam has been spamming me with advertisments. Guess what, I can get a season pass and pay $19.99 for DLC content for this game that I havnt even installed yet! really steam? really 2K games? really irrational games? This game doesnt have a multiplayer mode. why do i have to connect to steam to play? why cant i install from the DVD disk? if you buy this game you are basically paying $60 to give steam permission to spam you with sales offers. no thanks

Overall Review: I cancelled the 3 hour installation process and sent my disk back to newegg. btw the star that says "verified owner" next to my name confirms my story