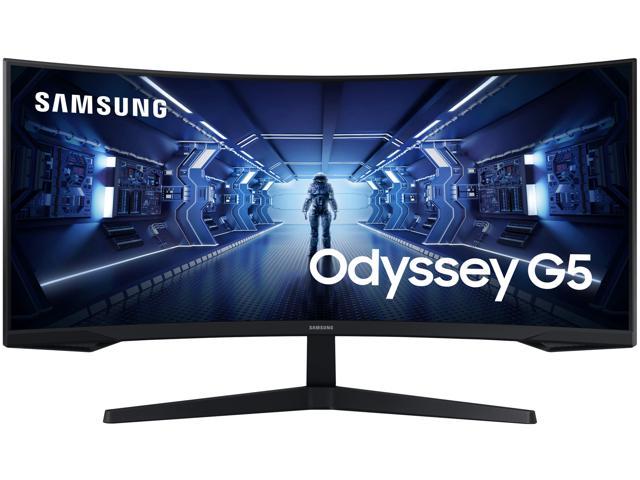 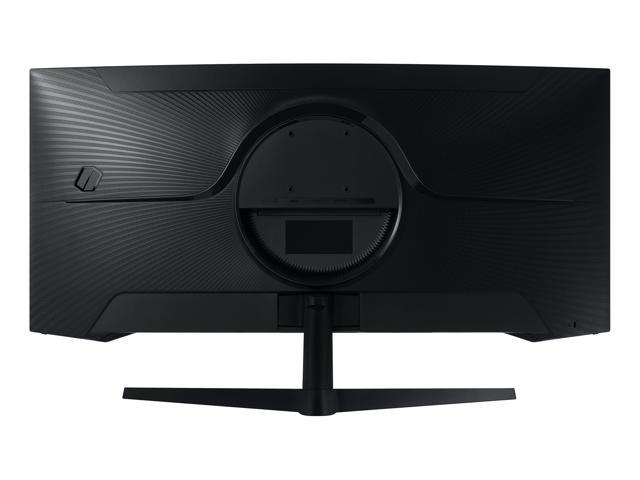 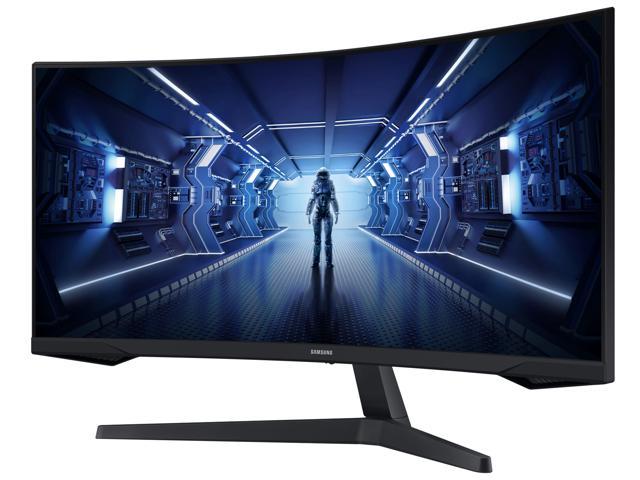 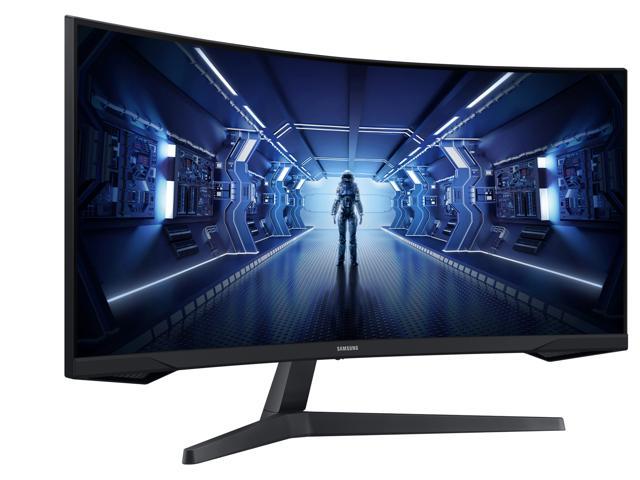 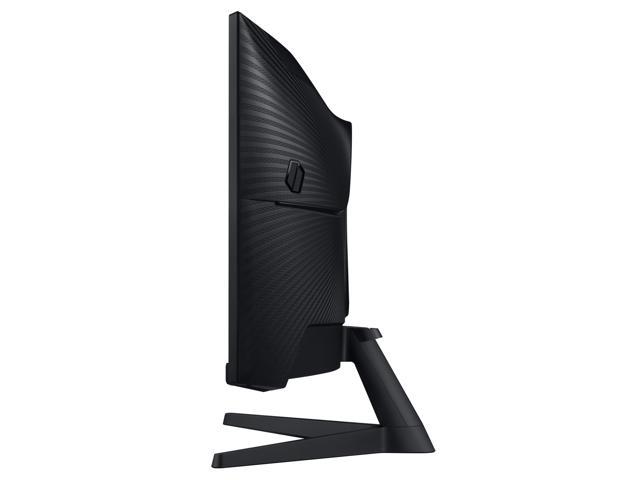 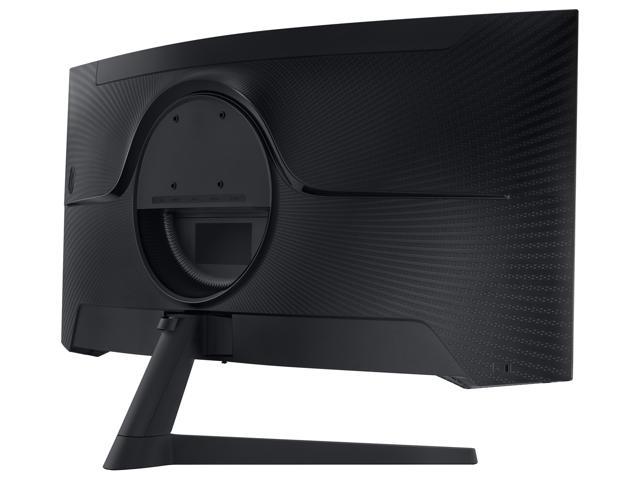 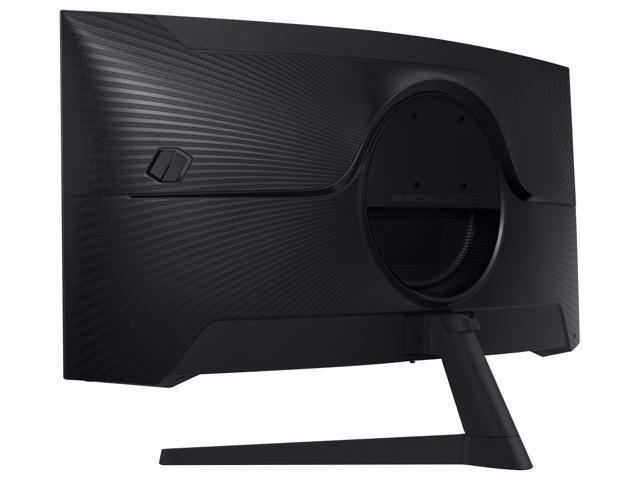 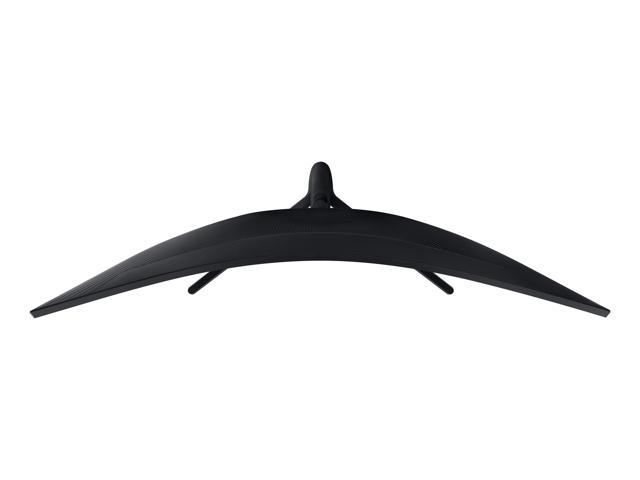 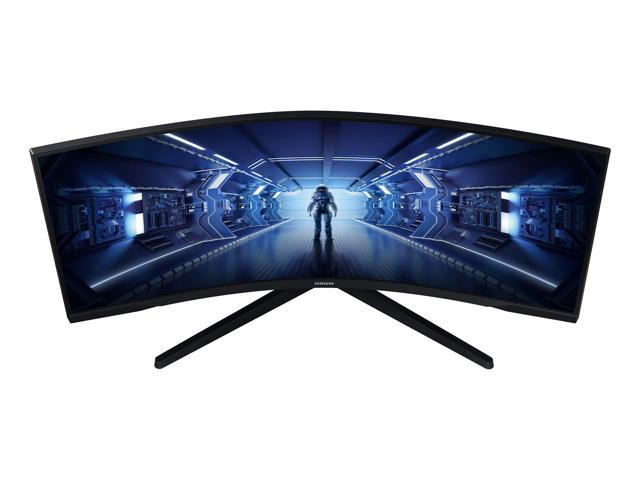 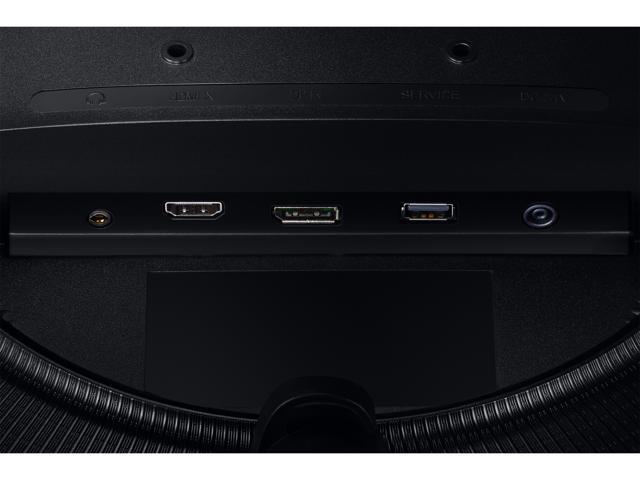 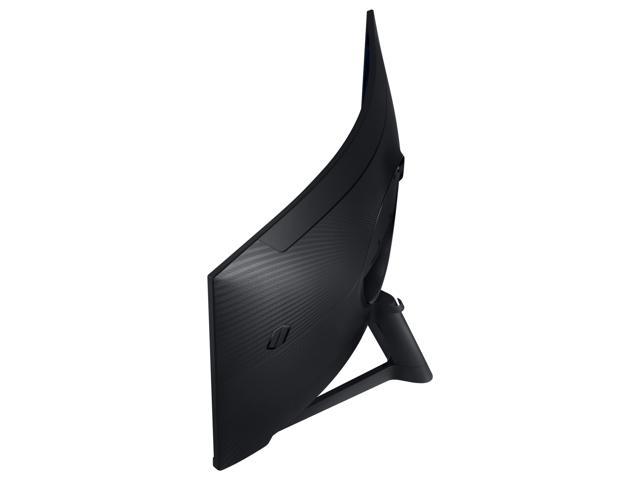 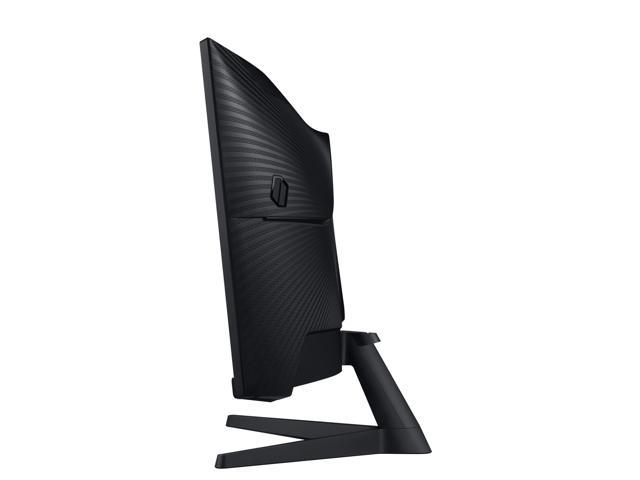 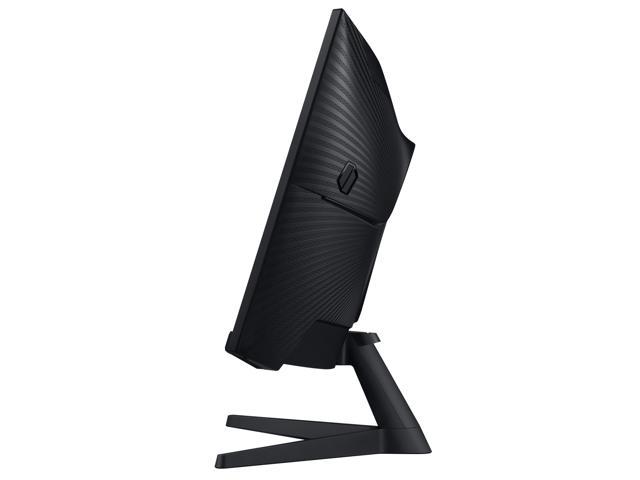 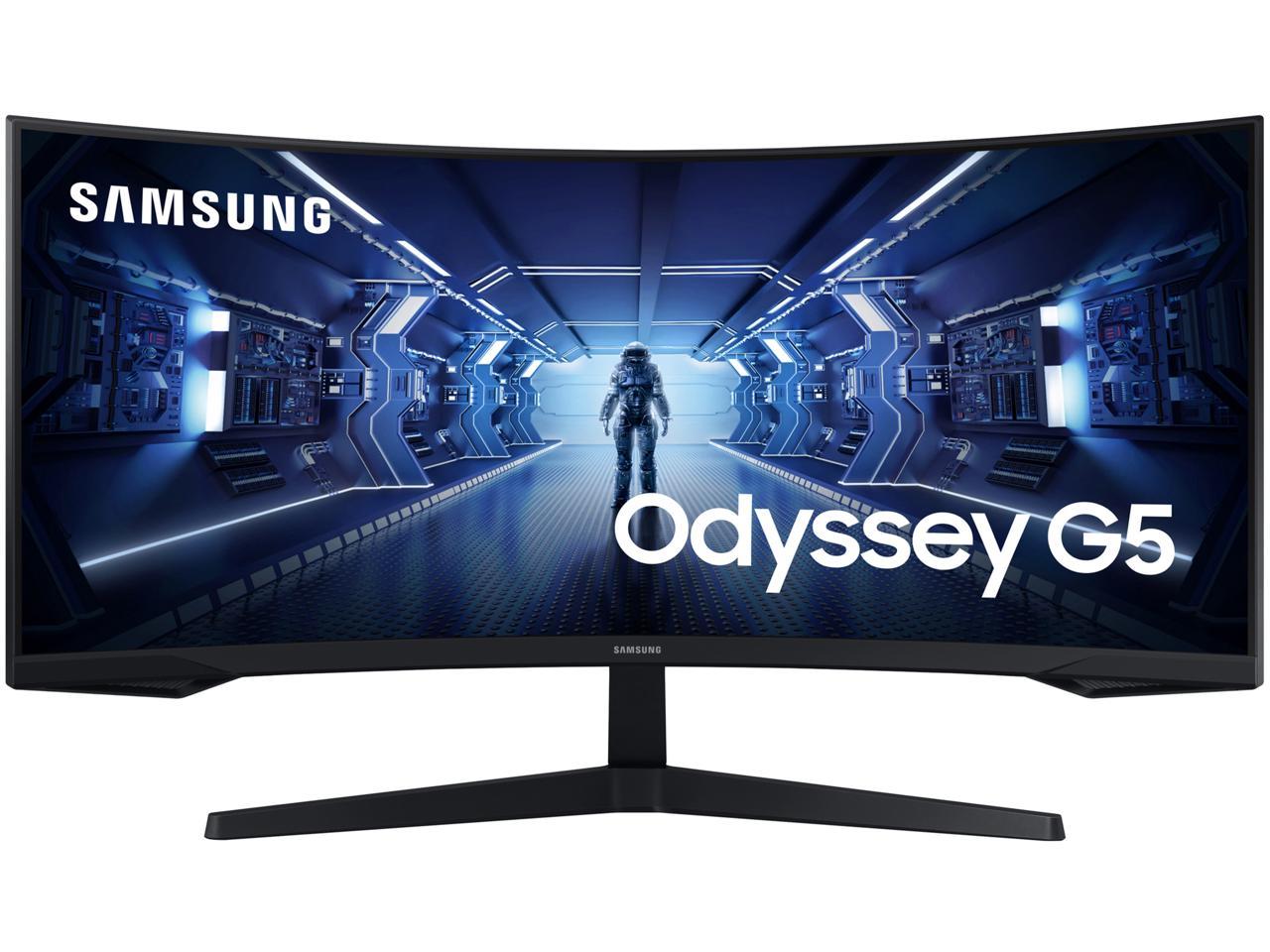 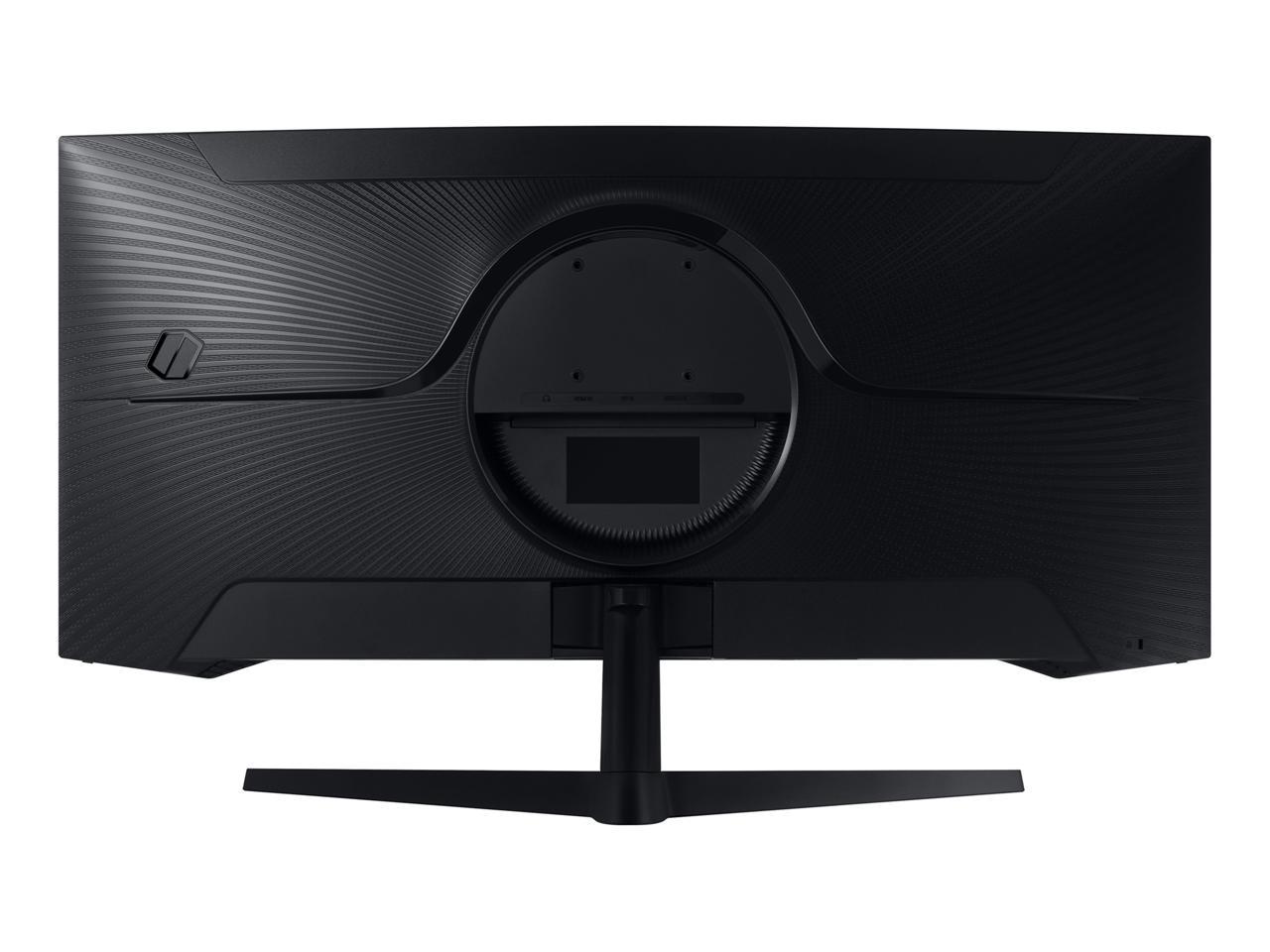 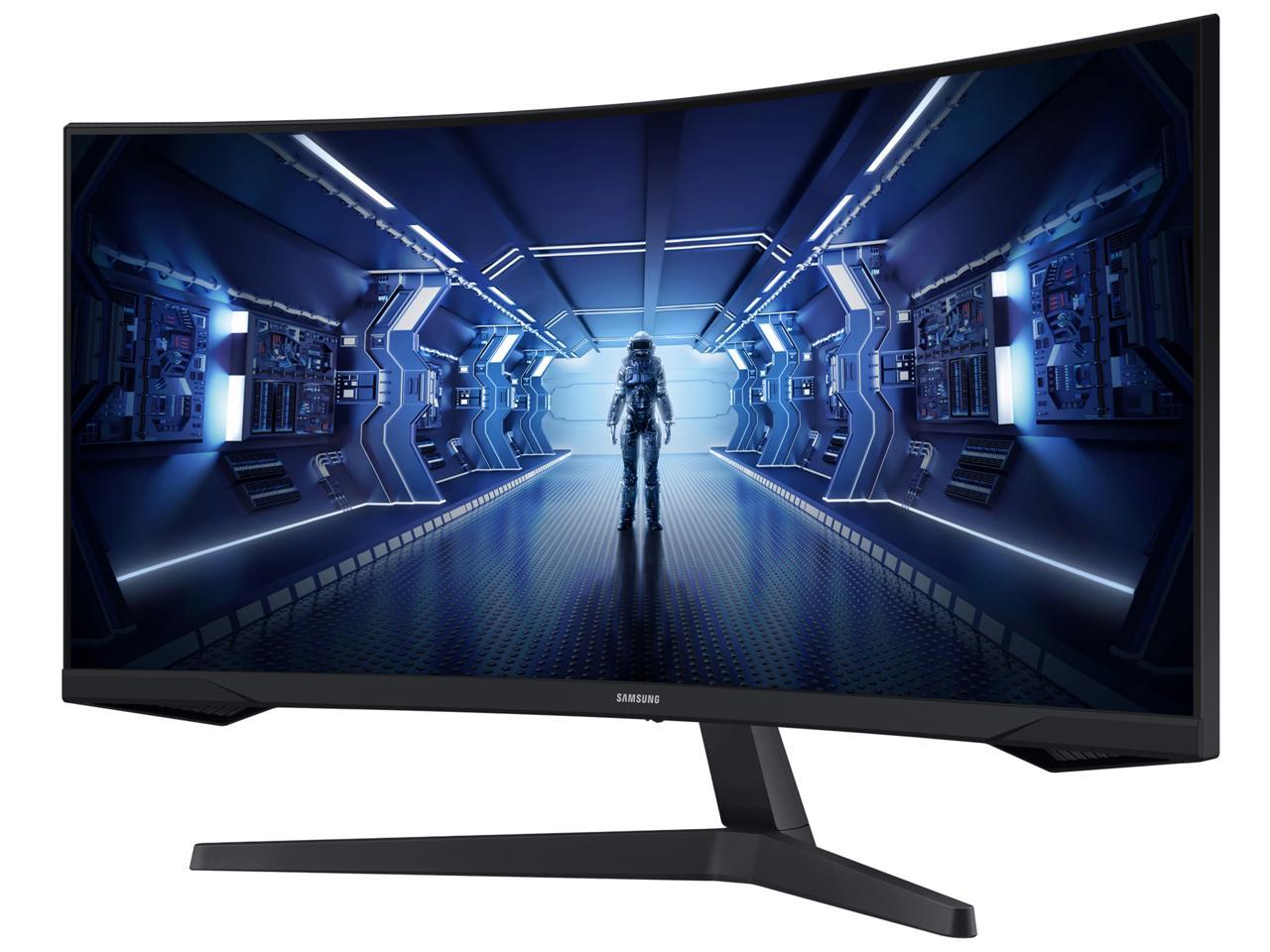 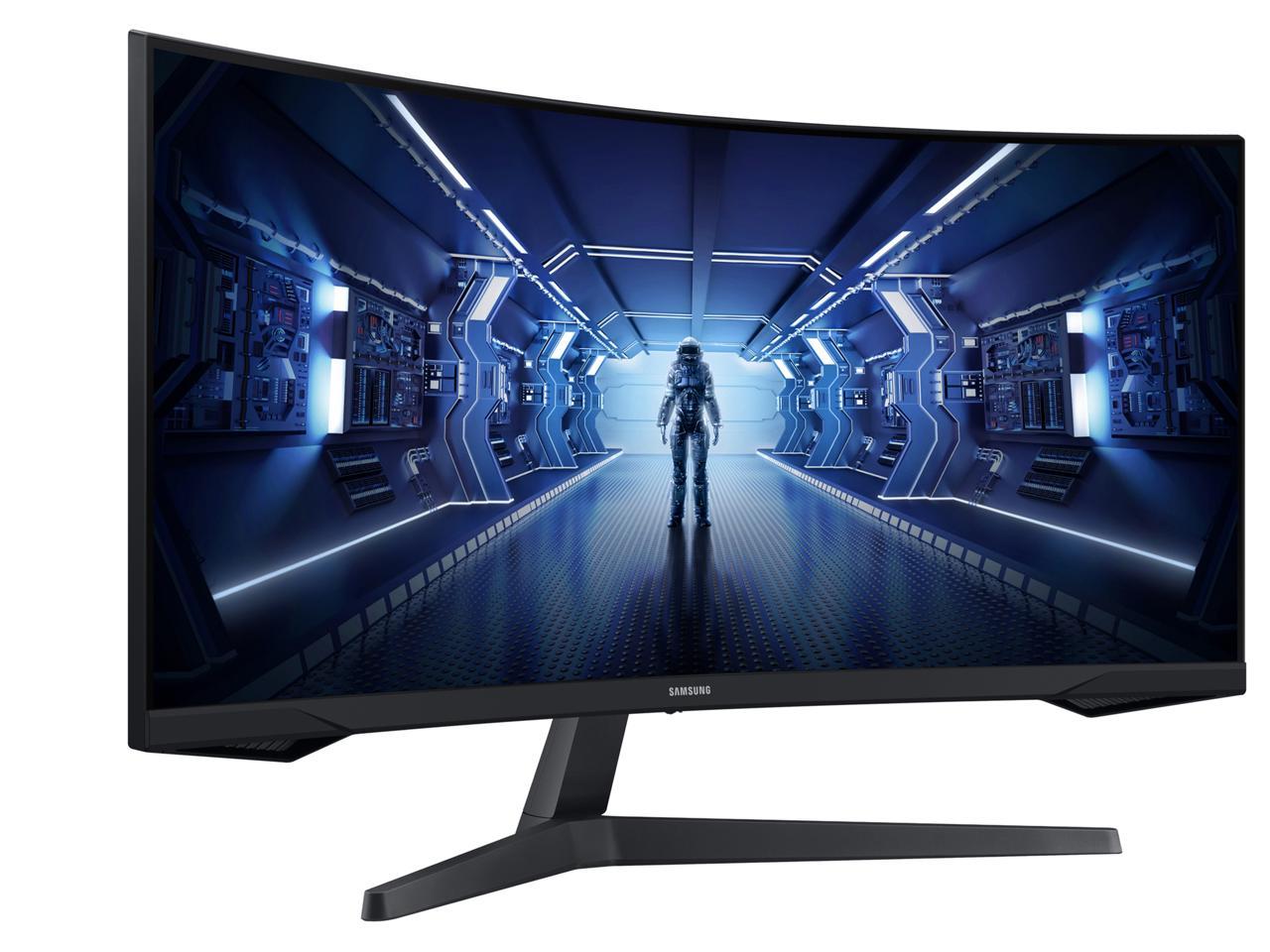 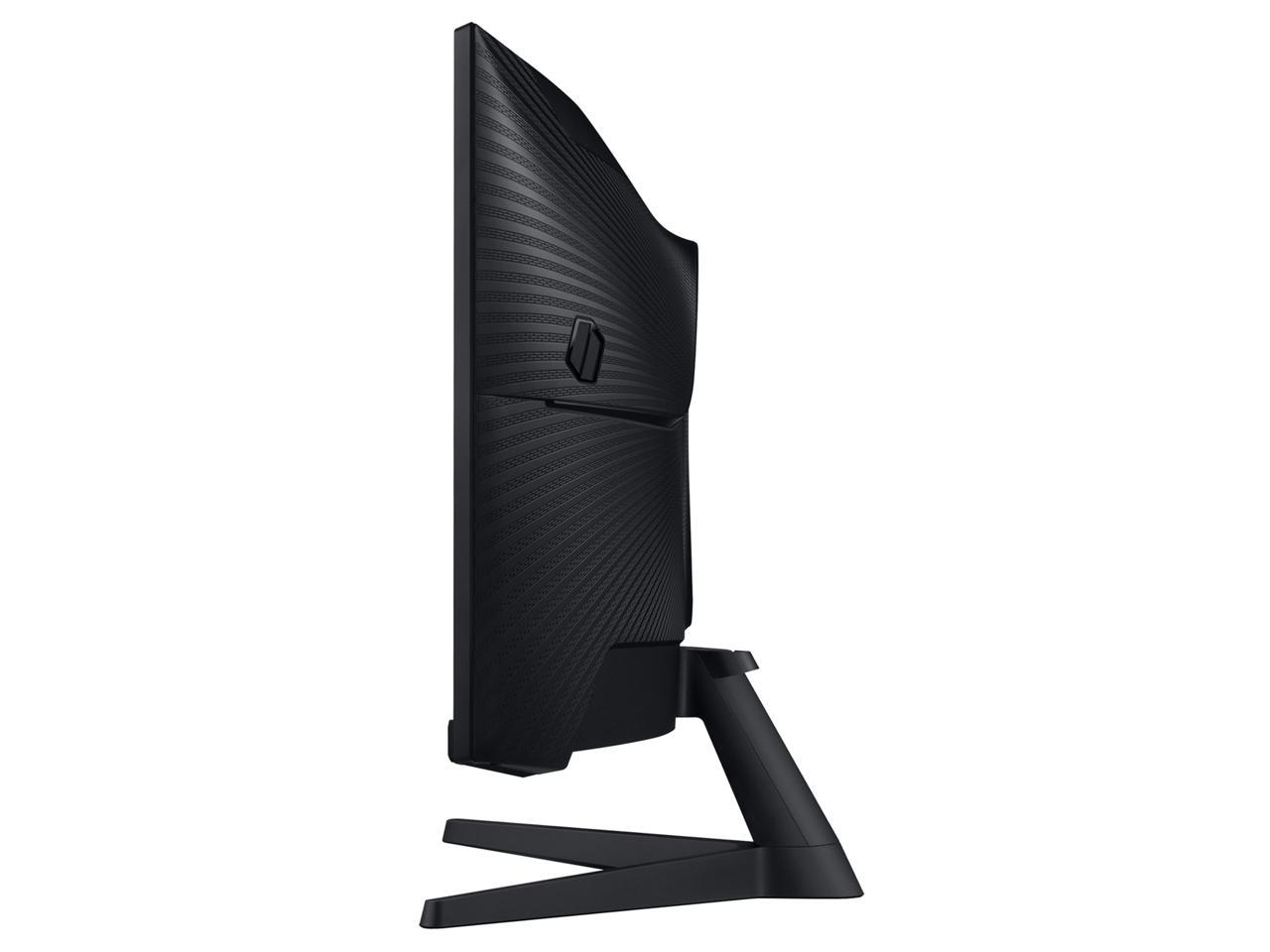 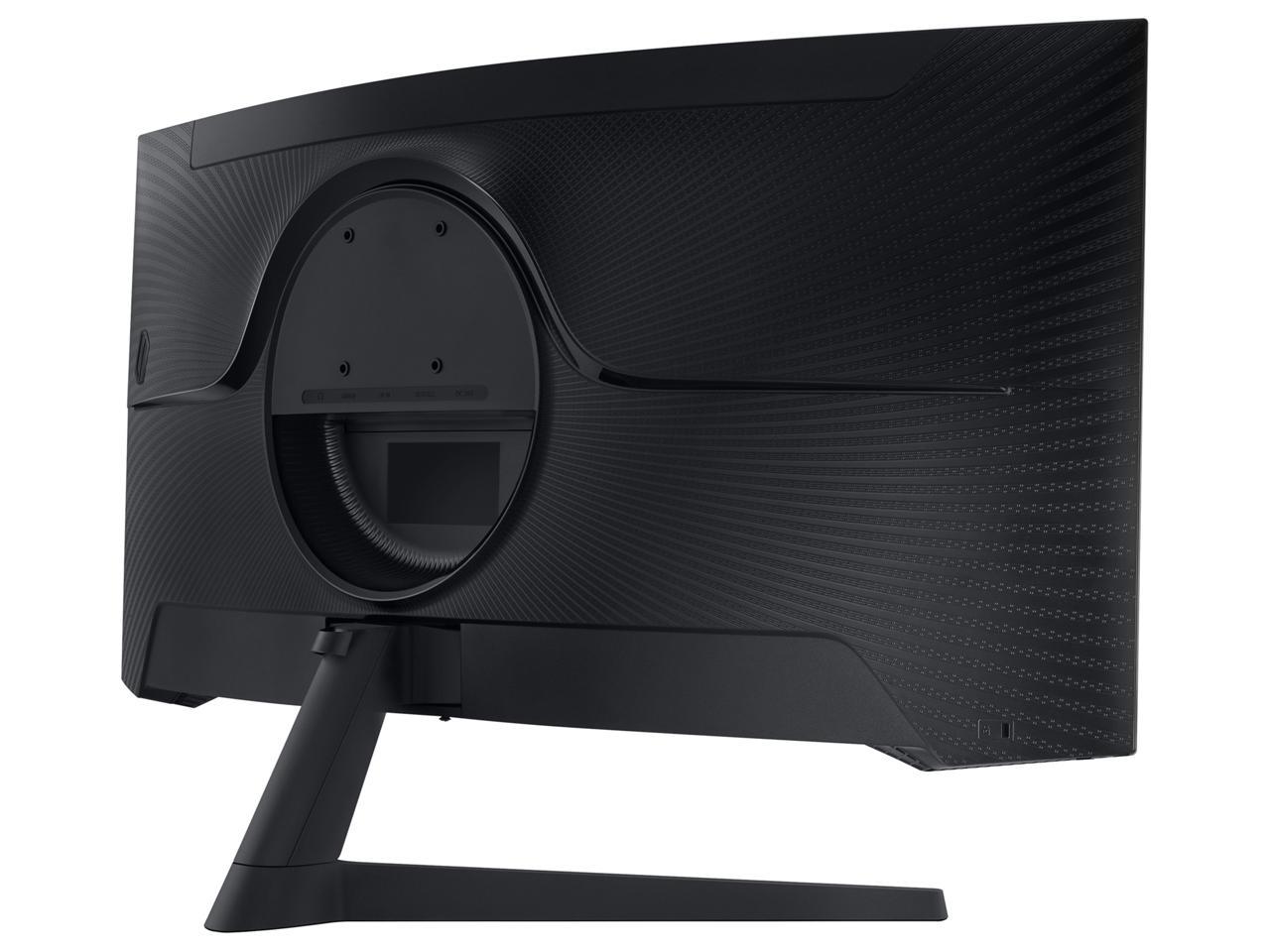 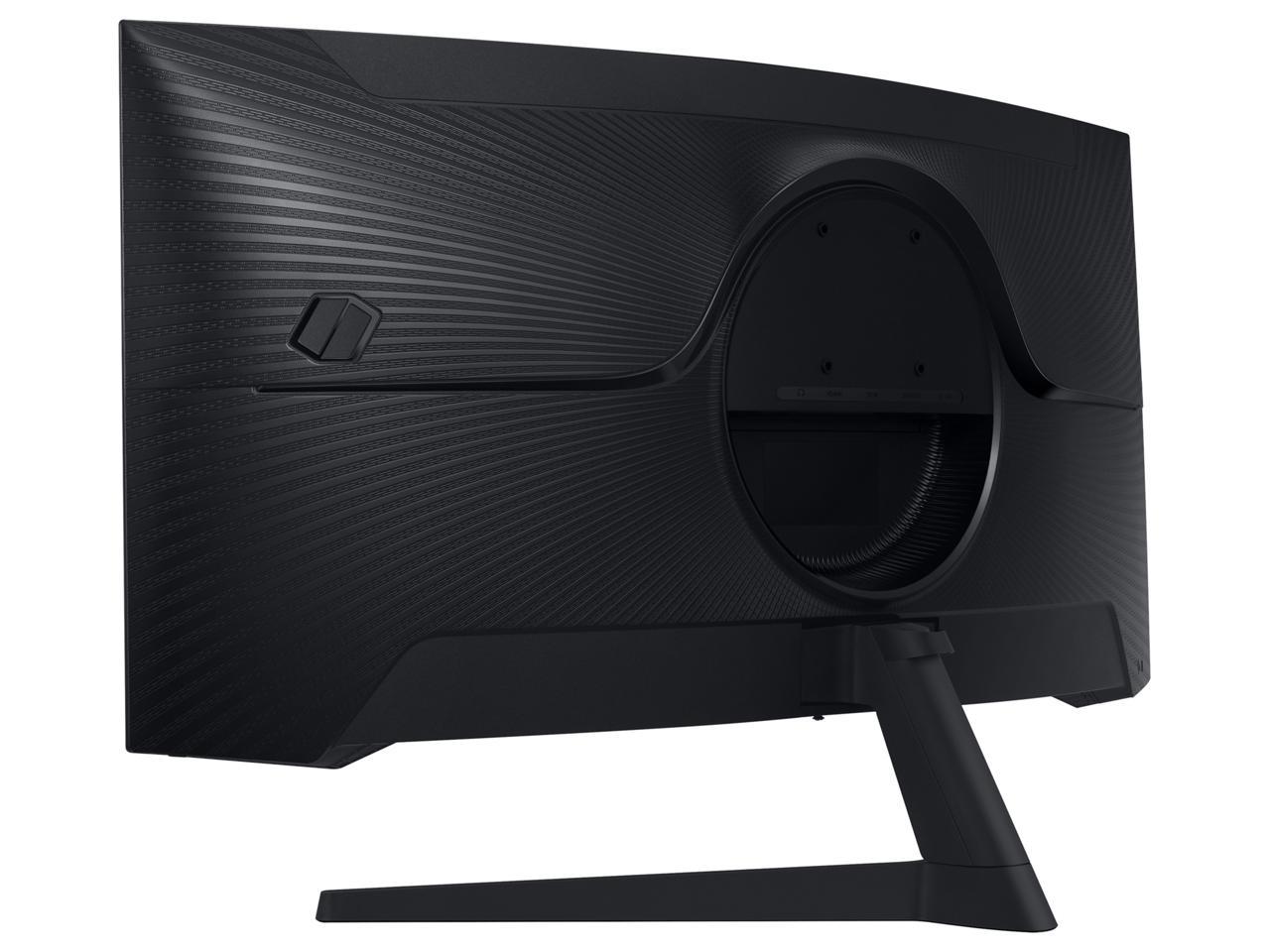 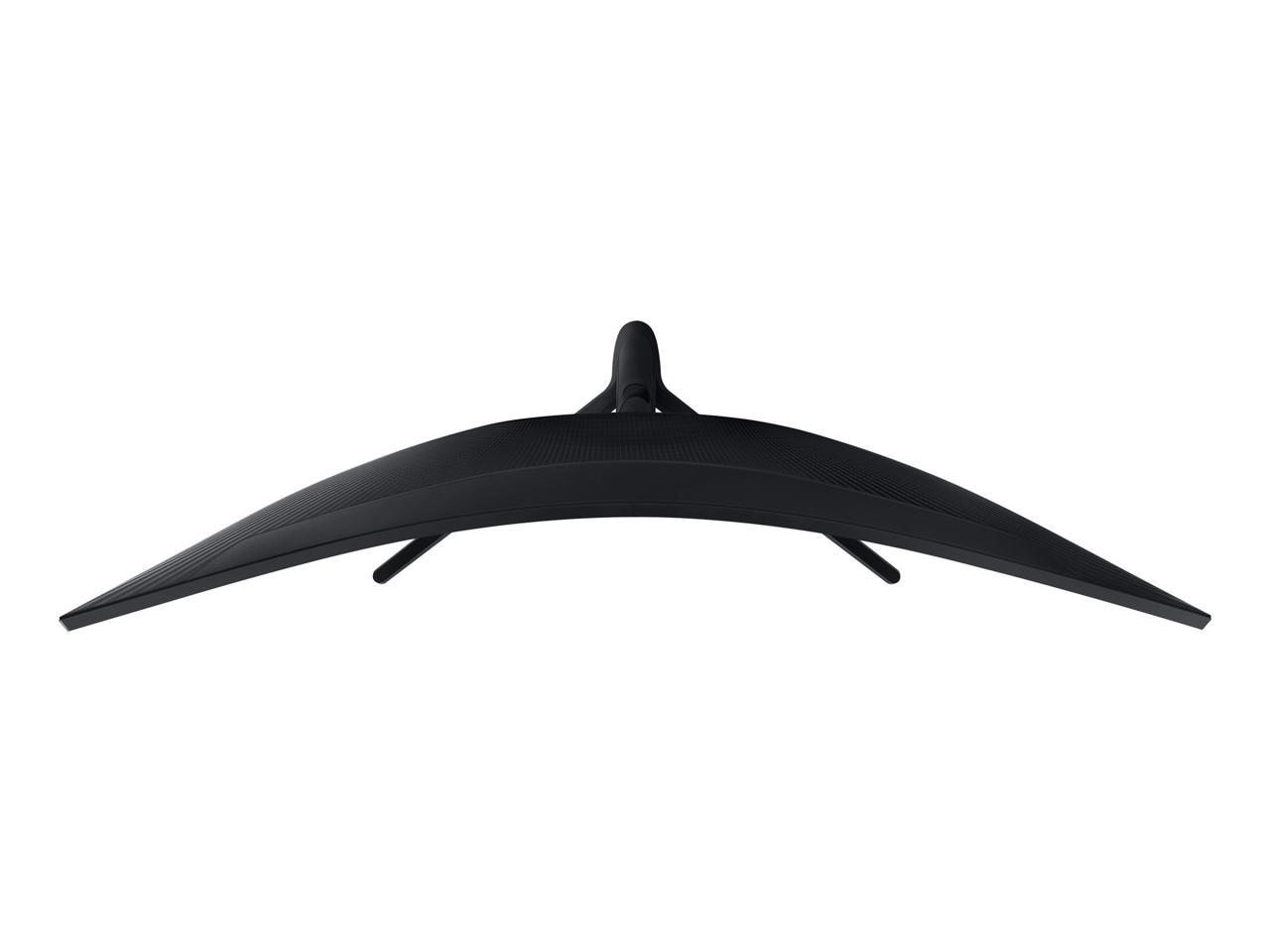 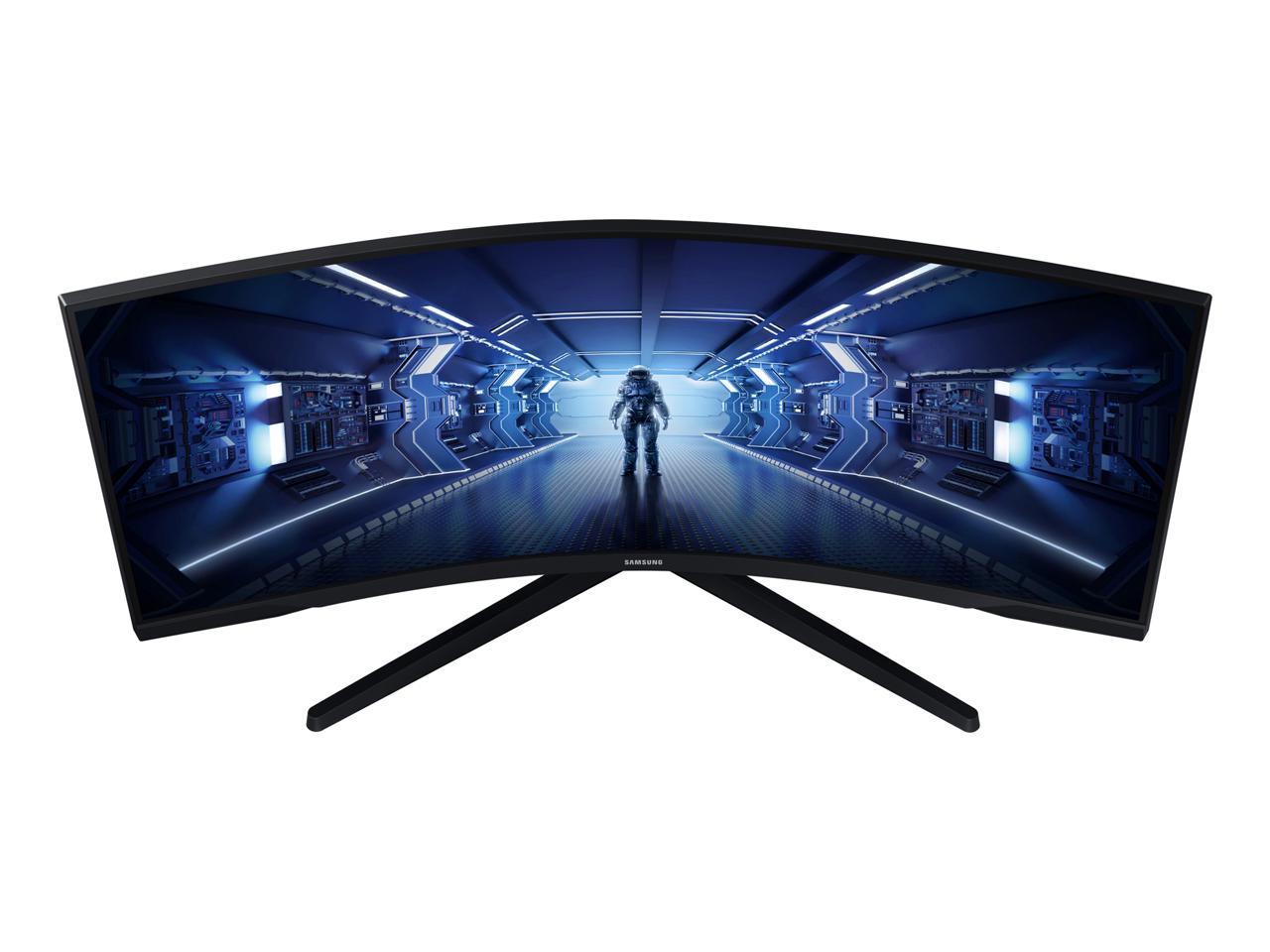 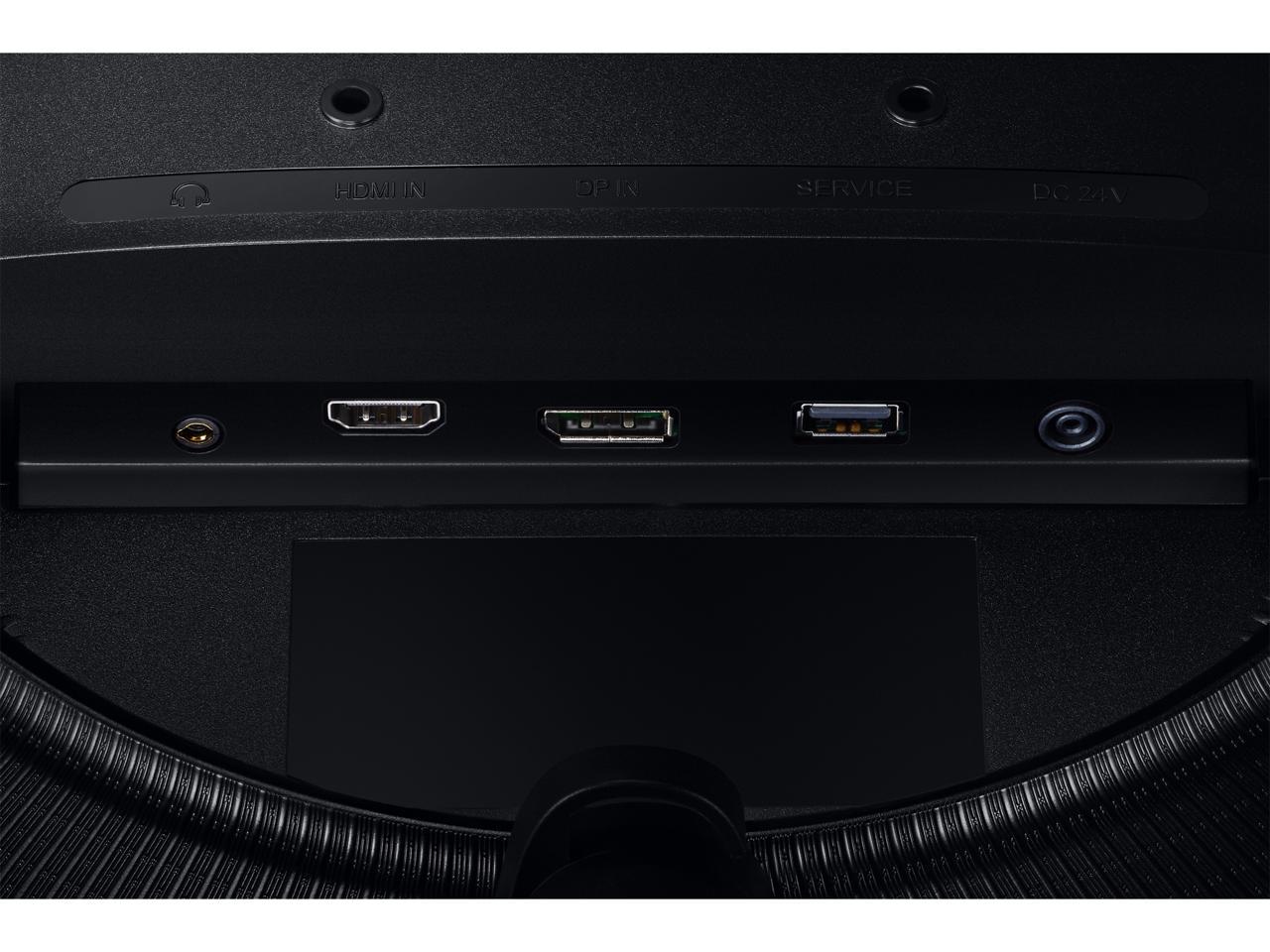 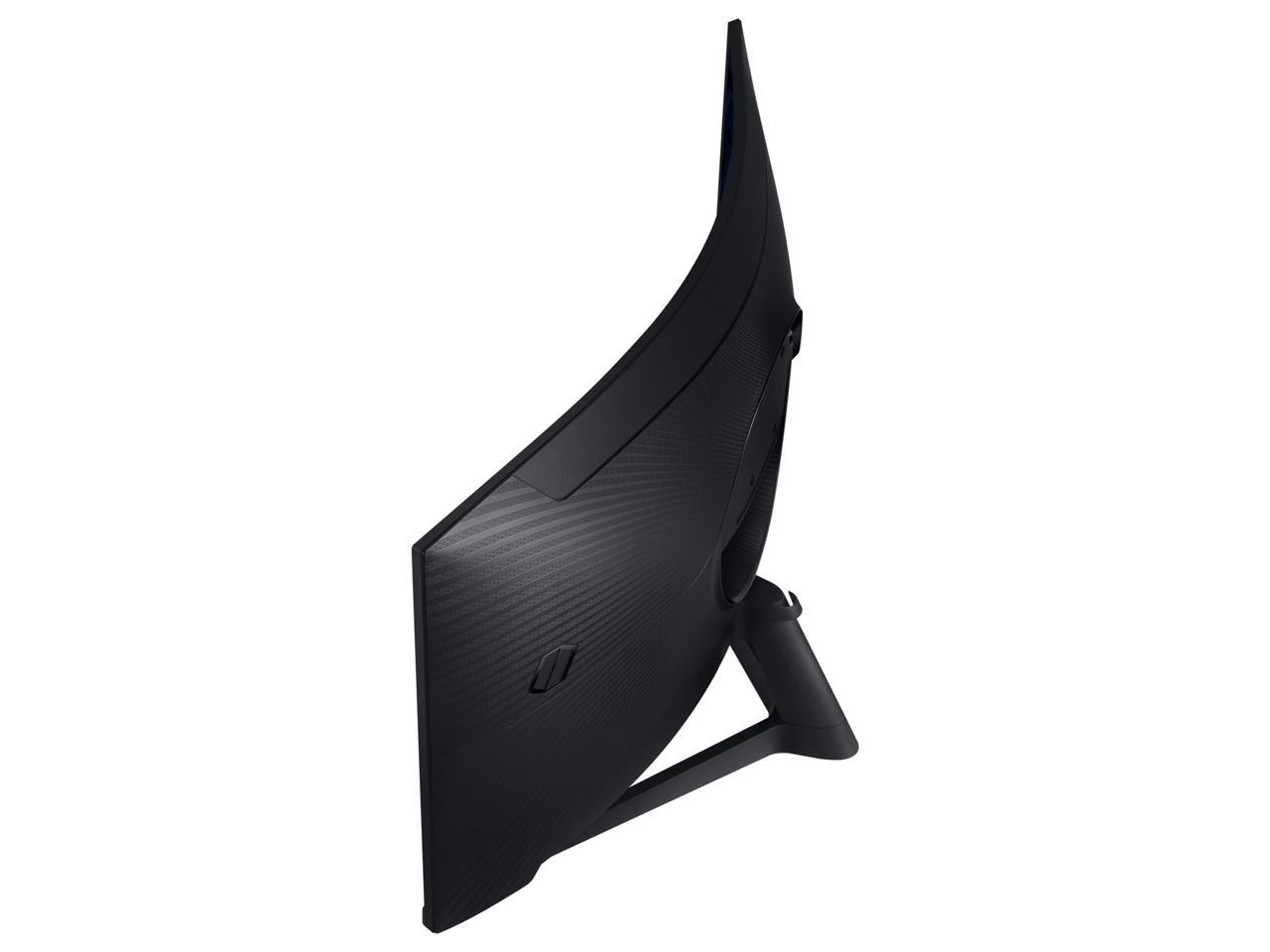 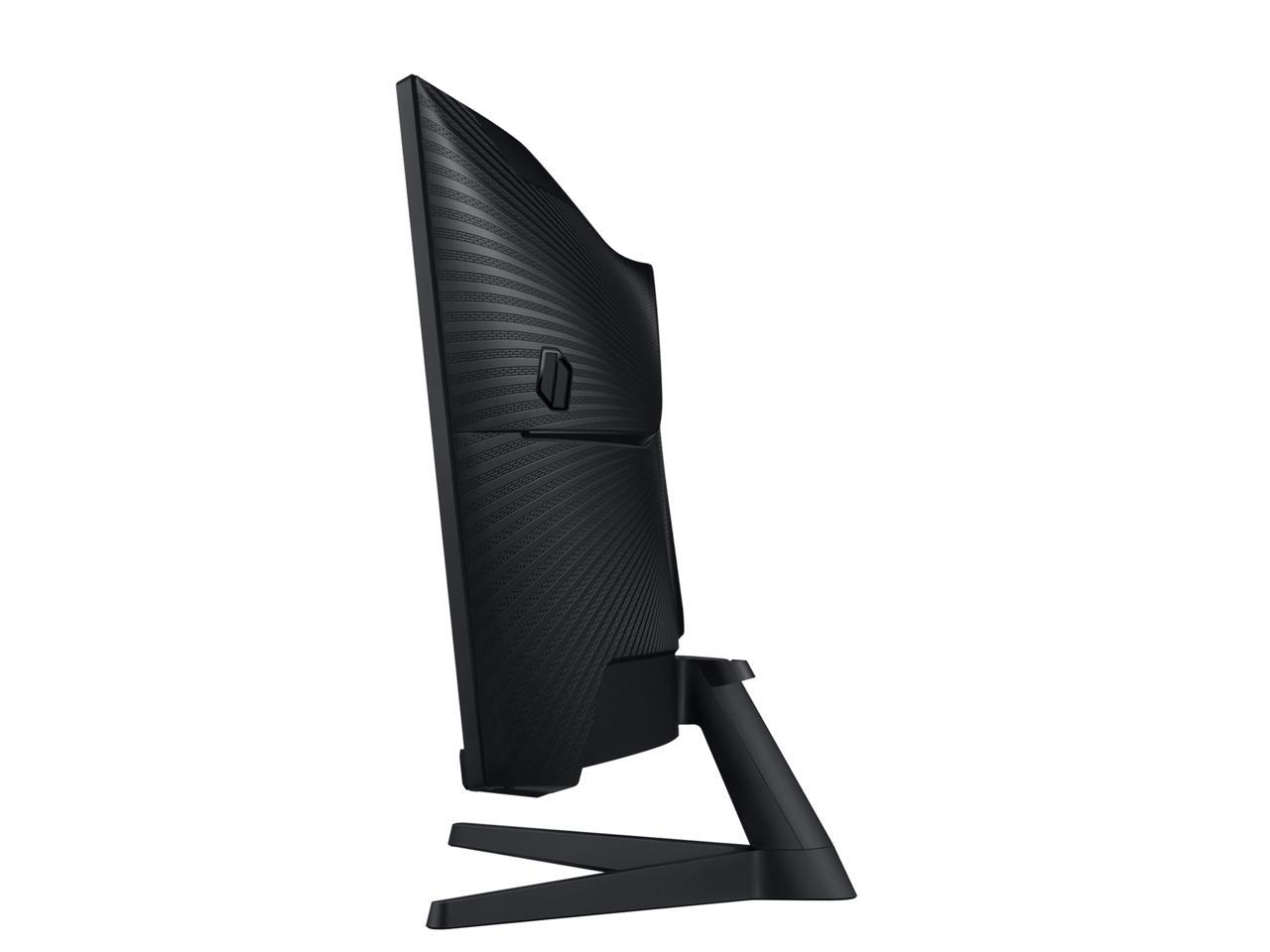 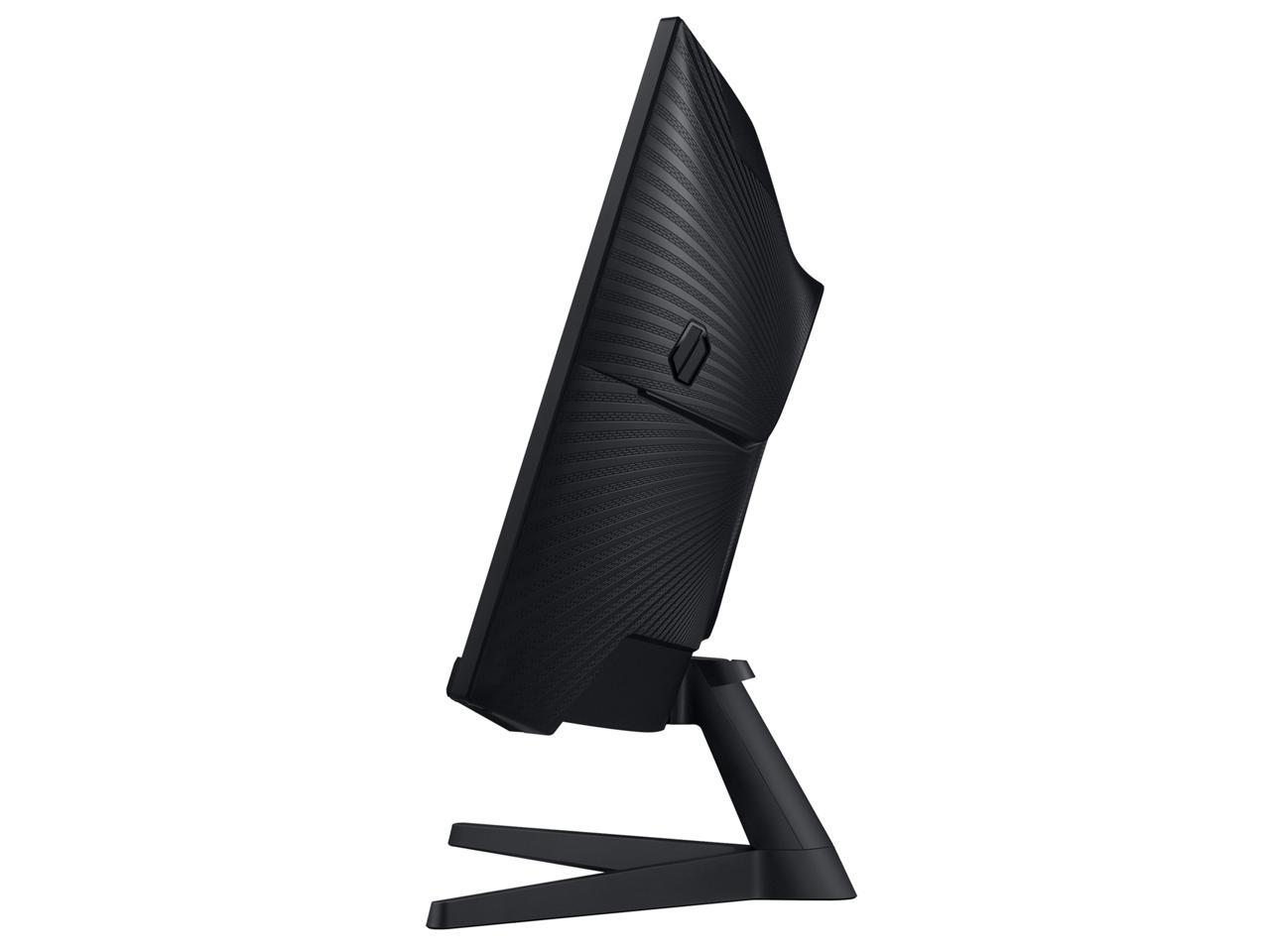 Vivid scenes wrap around you. The all-encompassing 1000R display fills every part of your peripheral vision and draws you right into the character's shoes. Experience a level of gaming more heart-pounding than anything before.

Ready to conquer enemies, lag, and blur. The ultra-fast 165Hz refresh rate handles even the most exhilarating scenes and super-quick visuals.

Make every move count with a 1ms response time. Jump on enemies as soon as you see them and stay ahead with precise mouse movements. Your on-screen performance is as swift as your own reflexes.

Awe-inspiring graphics with HDR10. A kaleidoscope of shades brings game scenes to life more vibrantly than ever before. Uncover the secrets hiding in the shadows with deep dark blacks, luminous whites, and outstandingly detailed resolution.

Learn more about the SAMSUNG C34G55T

Pros: This monitor is almost entirely pros. I genuinely love this product. I did however experience some cons.

Cons: -The stand is awful. Factor in the price of a new stand or vesa mount if you're considering the odyssey g5 34". It only has a slight vertical tilt which feels like you're gonna break something when adjusting it. The monitor rests tilted towards your keyboard, if you tilt it upwards to a more enjoyable viewing angle, it slowly settles back into the down position. The stand is why I docked an egg. It really is the worst. Think buying toilet paper when covid hit. It's that bad.-Flickering issue. So for the first week of owning it I noticed a brightness flickering issue in things like games, blender, photoshop. After some googling I found the identical flickering issue on the 240hz G7. There was a simple firmware update to fix the G7 flickering. However, the firmware update file listed on samsung's website for the G5 34 (M-T5500GGZA-1006.0[3F6C].bin) doesn't work for the G5 34. Monitor keeps saying, "No update files found on USB", tried with several usbs all formatted to FAT32, put the (.bin) file at top of directory, it just doesn't work, it's as if the file is for the 32" 144hz monitor instead of the 165hz 34". They both share the same firmware file download but have different specs, doesn't make sense. Turns out it doesn't matter, the reason my Odyssey G5 34 was flickering is because I had gsync enabled in my nvidia control panel. My previous monitor was a 24" gsync dell, so when I upgraded to this one I didn't think to disable the gsync option due to the fact this is a freesync monitor. There really wasn't much information about the G5 out there so diagnosing this was a huge pain. Hopefully someone who also has gsync enabled from their previous monitor can read this and solve their issue. -Final con but it's not the monitor's fault. Hooking this monitor up to my 1080ti with the provided display port cable caused my pc to take longer to boot up. My boot time is normally around 5-10 seconds. It ramped up to about 30-60 seconds. Seems trivial but it genuinely annoyed me. And the longer boot times only began after getting this monitor so I suspected it was related. I started digging, turns out this monitor runs display port 1.4, 10 series nvidia cards and older require a firmware update to enable compatibility with the display port 1.4 feature. The website I found claimed a display port 1.4 monitor plugged into a graphics card that isn't display port 1.4 enabled can cause slower boot times, hang on boot, and even failed boot. Updated my 1080ti's firmware and boot speeds are back to 5-10 seconds. Again, I hope someone that's experiencing the same issues reads this and solves their problems because this monitor is definitely worth keeping.

Overall Review: Overall? This is an amazing monitor, it performs as advertised. The toggle menu is easy to navigate. HDR was bashed by a lot of the reviews I read but I personally found it enjoyable and pleasant on the eyes. The 1000R curve was another complaint from some others but I genuinely enjoy it. First time looking at it I thought I made a mistake buying a 1000R but after dropping in my first match of warzone I completely forgot I even bought a new monitor, it wasn't until I got sent back to the lobby that I remembered life existed around me. Very immersive experience. Would definitely recommend, especially if there's a sale going on. Was on sale with an addition promo discount when I grabbed mine. You're going to need those savings to invest in a vesa mount as the stand, and I can't stress this enough, is garbage.

Cons: Curve is a bit jarring at first HDR is lacking

Overall Review: I love the immersion of ultrawide gaming, but my old monitor wasn’t cutting it at 75Hz with a terrible amount of ghosting. I was looking for a monitor with a high refresh rate, that played at 2K resolution, without the nasty side effects that come with budget ultrawides. The G5 delivers on all of those fronts. The monitor looks great, and performs as advertised. Ghosting is there but not really noticeable. Of course the HDR isn’t fantastic but I knew that coming in. All in all, you absolutely get what you pay for. A great 165hz ultrawide without a ton of features, but it still does its job very well. I got what I paid for.

Pros: -Display, color and clarity comparable to the more expensive G9 -Picture by Picture support is fantastic. It's a feature of the G9 I use quite often -All the bells and whistles, fast refresh rate, low lag, super quick response time and just about all the configuration options you find on the G7 and G9.

Cons: -The monitor tilt is a bit stiff -Monitor stand doesn't have height adjustment (the most annoying of all the cons) -Doesn't support 10-bit color -Power cable contains a power brick instead of a single cord made cable management less friendly

Overall Review: As a G9 user, this was an awesome display to pair it with. It's definitely great for gaming. Beautiful and vibrant colors and all the bells and whistles you'd expect at this price point. Samsung would do well to consider any future 21:9 ultrawide 1000r monitors to come with a height adjustable stand like what was provided for the G9 and G7. None of the cons, however, are any reason not to consider the G5 ultrawide.

Pros: Best OSD on a monitor I have seen 1000R Curve 75x75 VESA holes to replace the included stand Freesync turned on without issue

Overall Review: I originally purchased an Acer Nitro 34” 3440x1440 from another retailer. The panel on that monitor died in a day and no one had a replacement in stock. So I ended up purchasing this Samsung G5 34” WQHD. This monitor replaced a LG flat panel 2560x1080 screen. I prefer the 1000R curve over the 1500R on the dead Acer. 1500R messed with my eyes. Surprisingly, the 1000R does not induce any visual issues for me. The Acer had an amazing stand. When I setup the Samsung with the stand that came in the box I was very disappointed. The monitor sat too low and tilted forward. Even after adding height under the stand it still was at a bad angle. I ended up removing the provided stand and using a vesa mount stand. This cleared up all issues and the monitor looks beautiful. I am happy with the purchase overall. I am glad the Acer died because I prefer the curve and OSD of the Samsung … it just functions smoother. This was a big upgrade from the LG it replaced. Disclosure – LoL is the only game I play regularly. I do a bit of video editing but I do more programming. This monitor shines in all of these areas. I turned off dynamic brightness, set black equalizer to 20, and turned on free sync. All other setting were left default.

Cons: Yes the stand Not really a con but kinda wish the back had some sort of passive RGB light on there ah well lol

Overall Review: Overall would recommend, great refresh rate and good colors was you play around and optimize to your liking. Whites can sometimes be too bright, I had to lower the brightness while browsing the web. I had no issues enabling free sync to work with my Nvidia card while also enabling G-sync on the panel. Flash black for a moment but worked fine after that been playing games no issue ever since. Lot this monitor does what it says and decently well

Overall Review: Would recommend for gaming on a medium budget, if you also need the screen real-estate for productivity. Not optimal for color specific work

Pros: I wanted a gaming monitor with at least 2k but also one for work that has PBP option and this one fit the bill. It's a 21:9 aspect ratio which is great for work but took a few hours to get used to while gaming but I really love it now for games. The curve is great, I have not noticed any ghosting in fps games or any games at all and this monitor is so much more responsive while gaming than my last one. The brightness, contrast, gaming options via the toggle on the underside of the monitor is pretty intuitive and easy to use, no complaints there. No crosshairs for gaming if that's what you're looking for, but I don't use them so no biggie.

Cons: The stand sucks. There is no height, tilt, or rotation option available and it was wonky to install as it kind of snaps into place....why not just attach the stand to the VESA mounts?

Overall Review: I love this monitor for gaming and working from home with the PBP option. The colors are rich, text is sharp, and gaming is ghost free. It's a little higher resolution than standard 2k which can be good or bad depending on your gpu.

Did you find this review helpful?
Sammy
Ownership: 1 week to 1 month
Verified Owner
Imagine your product wont turn on. Quality control?6/8/2021 10:20:04 AM

Pros: If the monitor turn on, then you have an super excellent image and response.

Cons: Imagine that you open your monitor but wont turn on once it install. That is what happened to me in the first time I test the monitor. Were is the quality control? I didn't return the monitor because the last one I bought in another on line seller "A" was worse and I need one to work. If your monitor wont turn on remove the power cable and wait about 5 min so the capacitor can discharge. If wont turn on do the same method 3 or 4 times till it turn on. Once it is on, no problem later to turn it on.

Overall Review: The Monitor image is just way above expectation. The only thing is quality control.