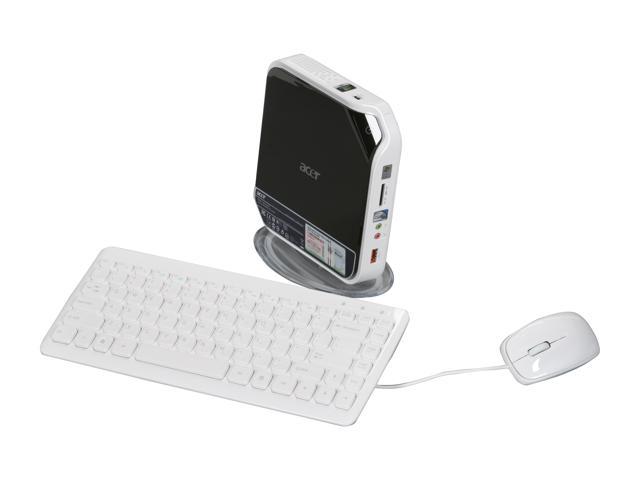 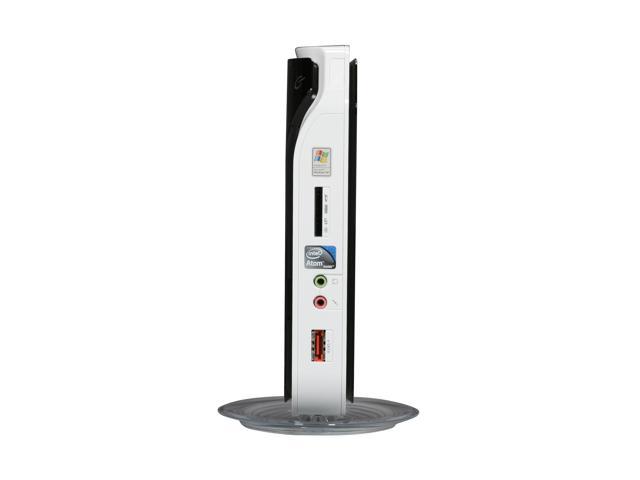 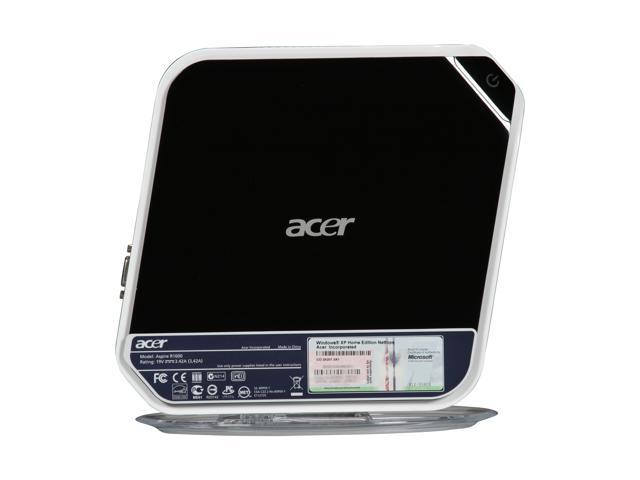 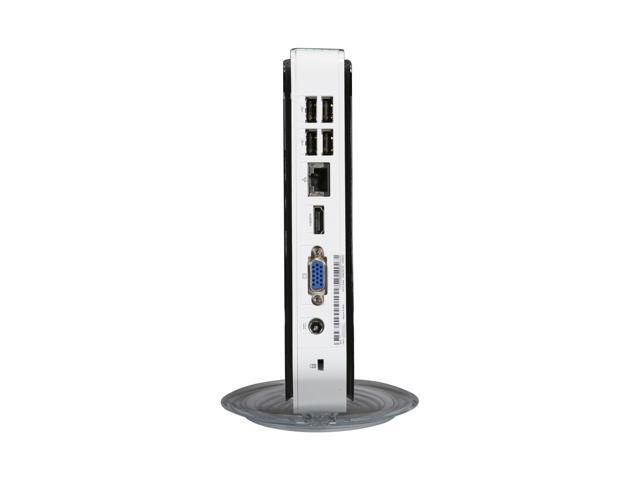 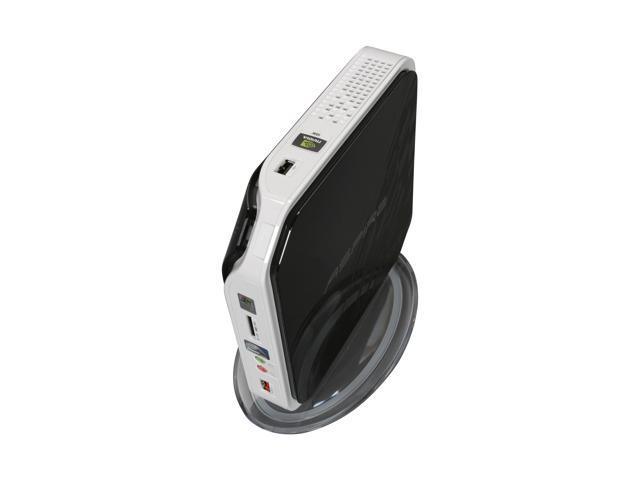 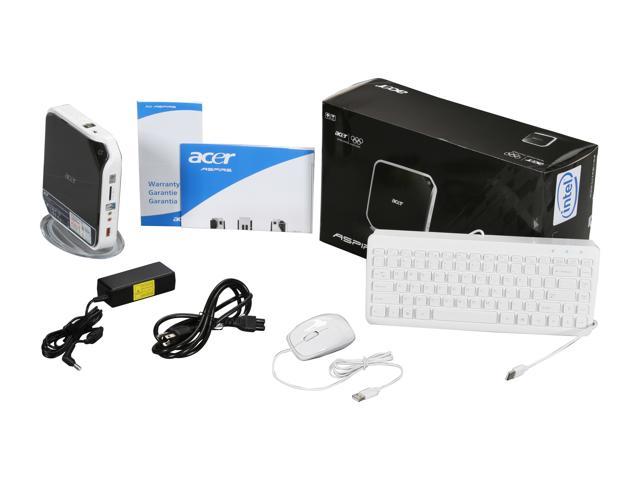 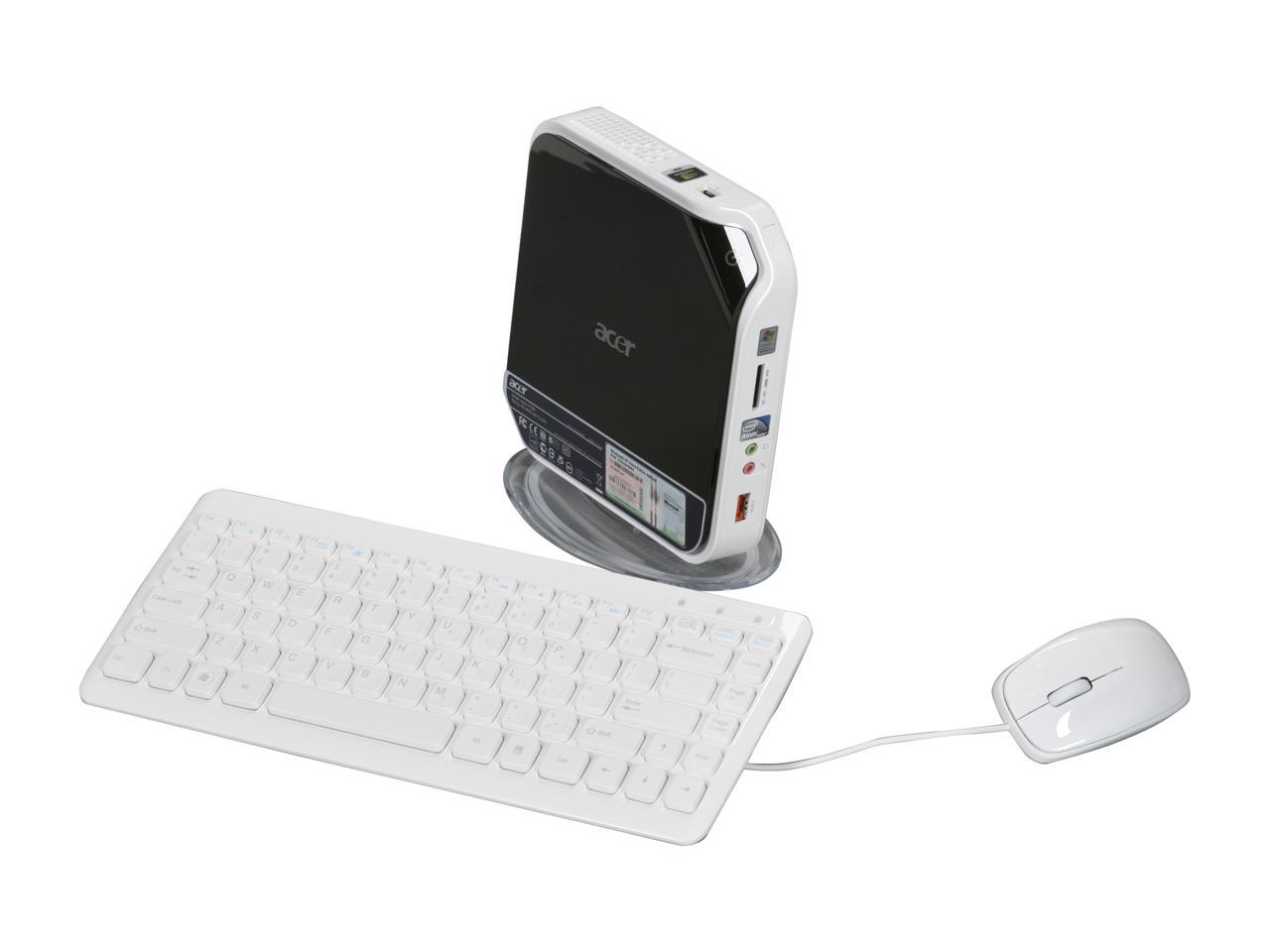 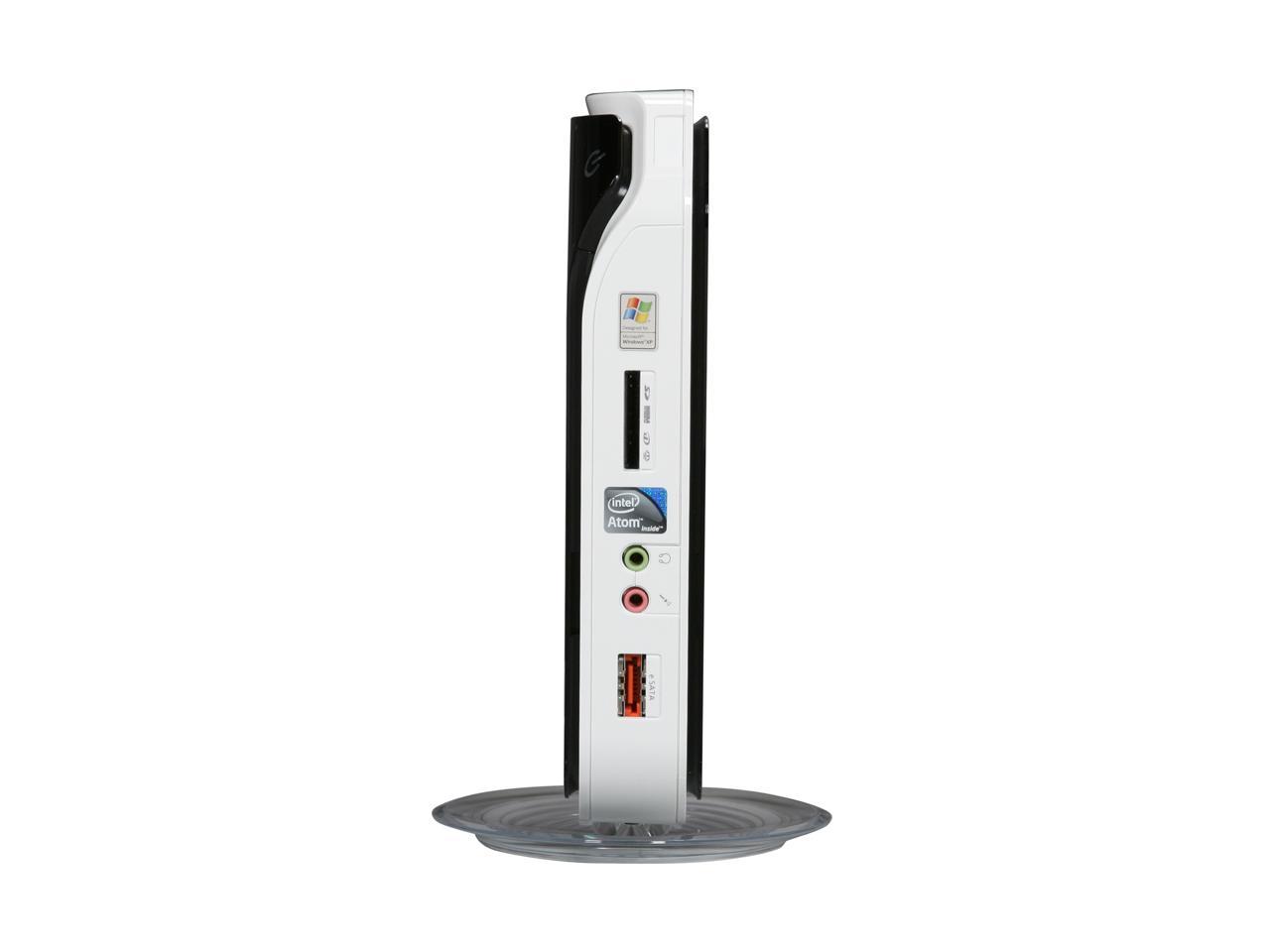 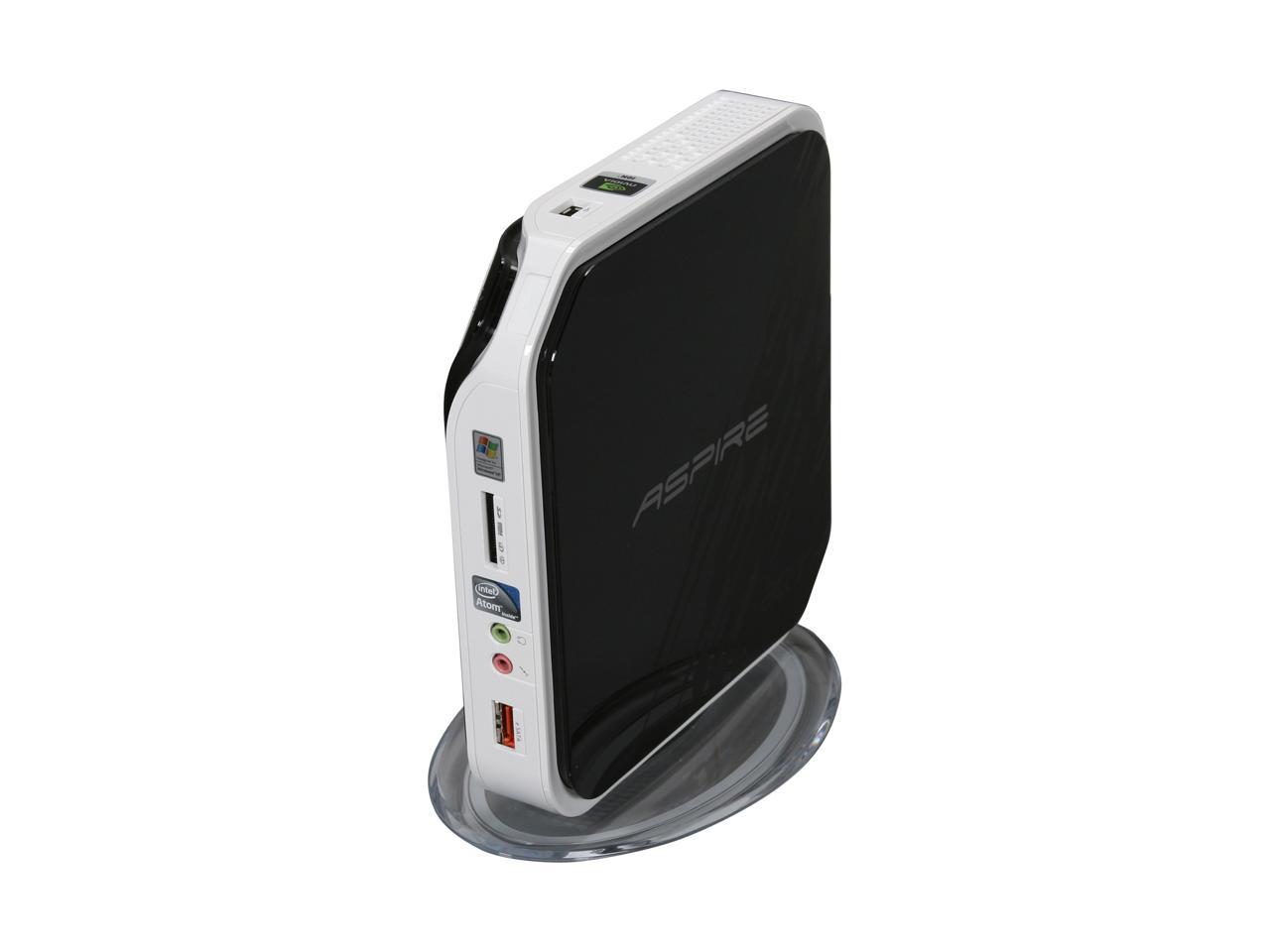 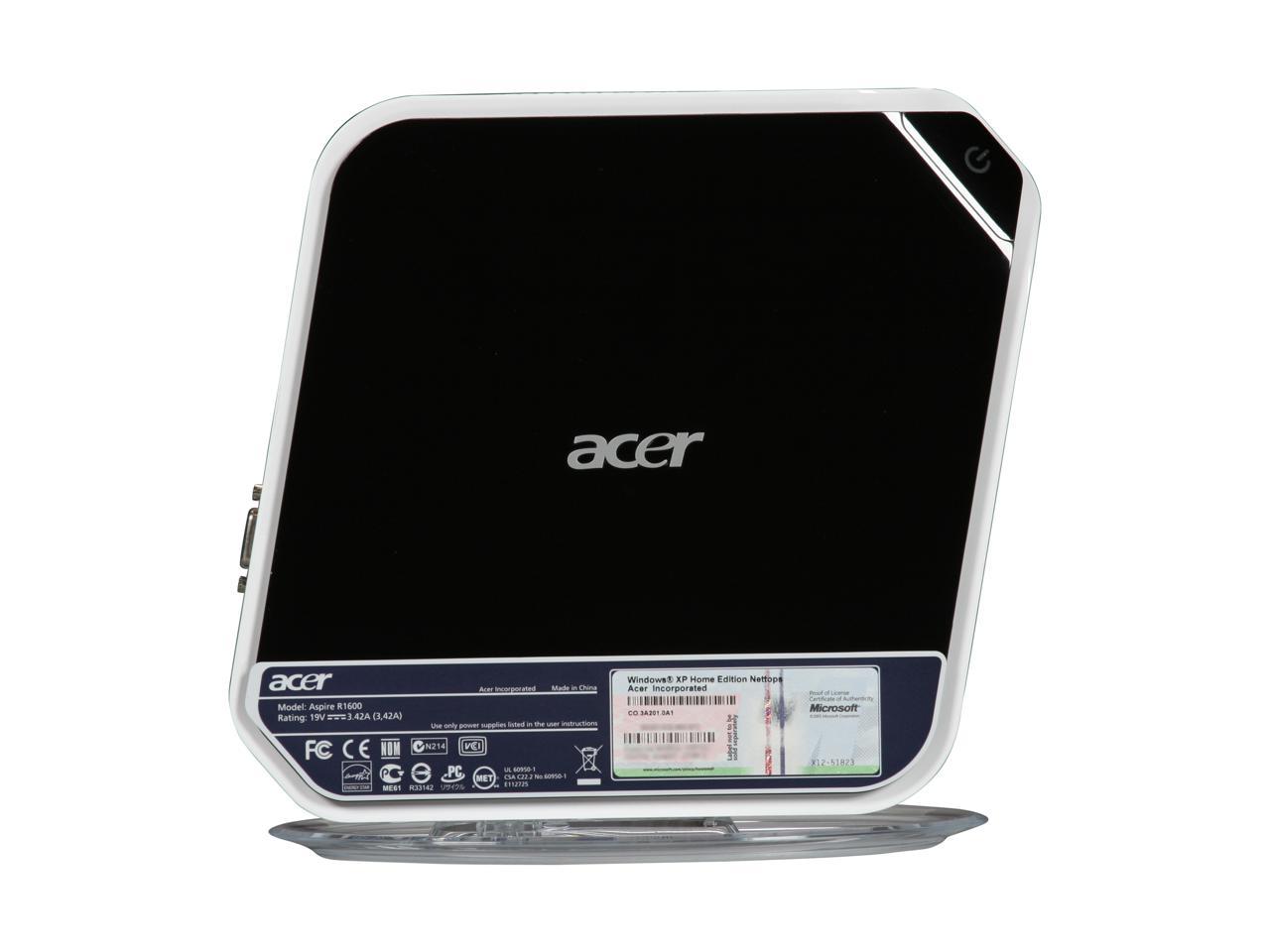 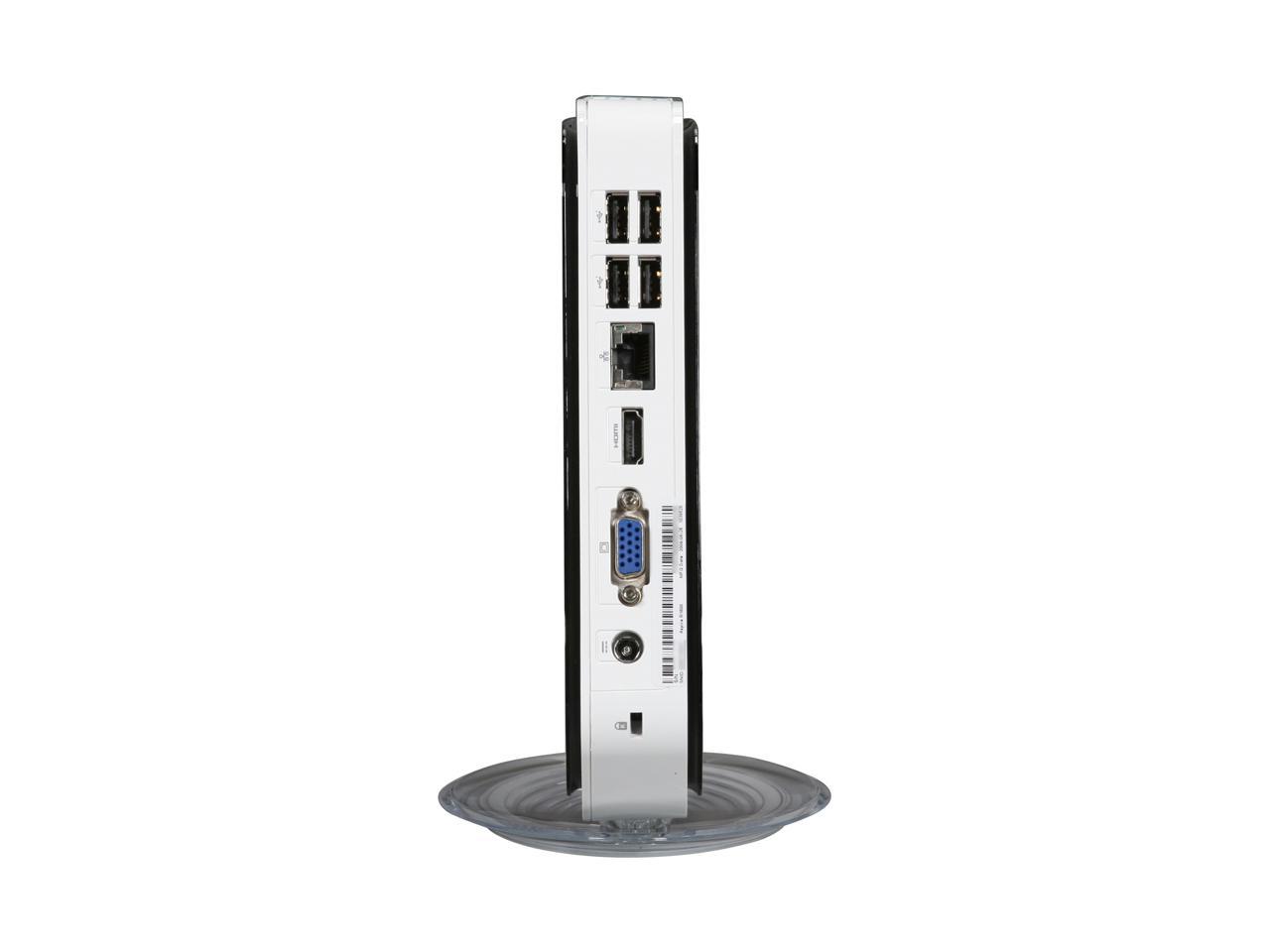 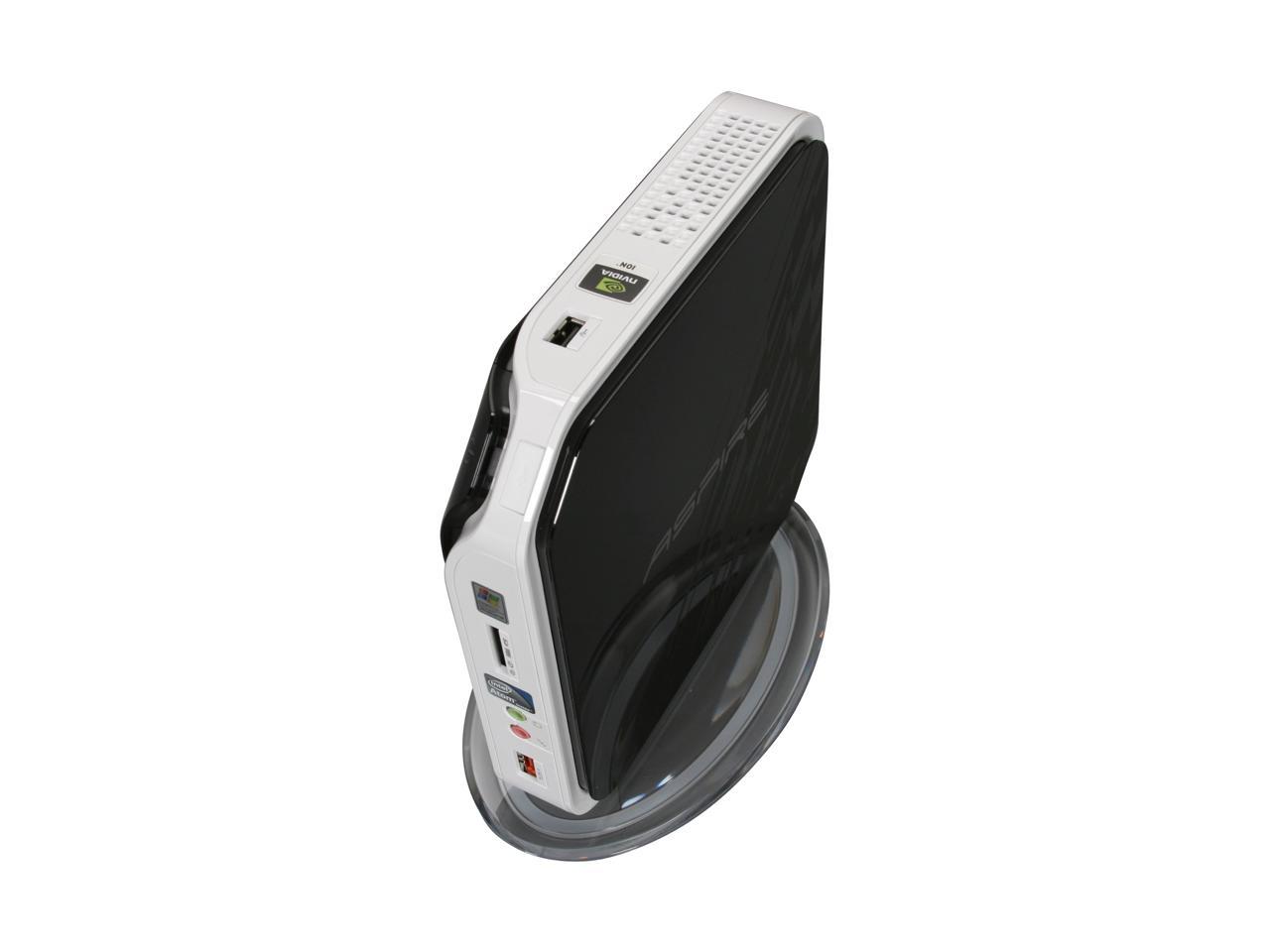 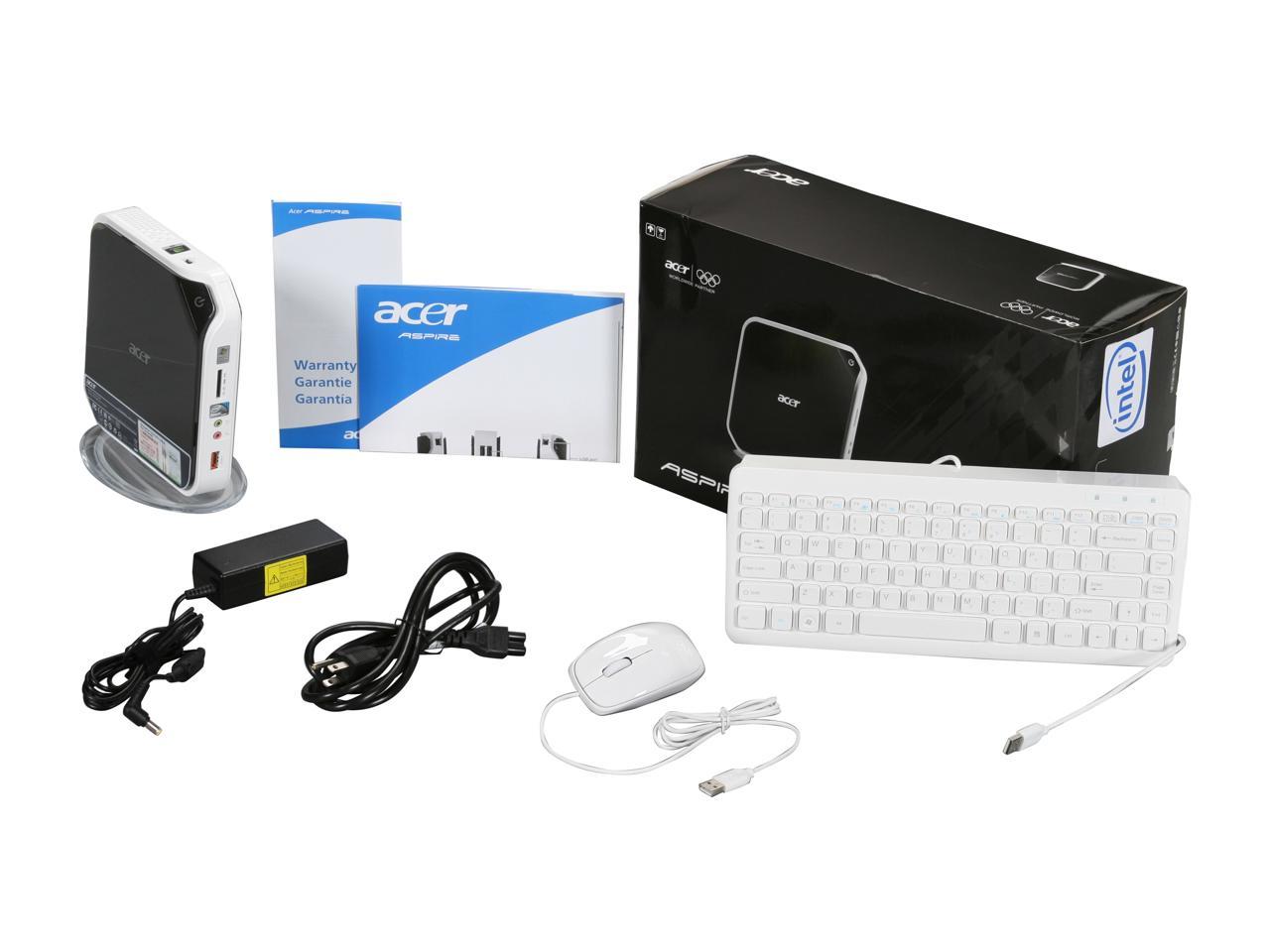 (199) Write a Review
OUT OF STOCK.
Specs
Reviews

Pros: You get an ION platform for roughly 150.00 less than the Intel coupled with all the others going for 250-350. By comparison the graphics performance is far superior to the Intel chipsets. HD Audio, HDMI and better expandibility just seal the deal. The performance is alot better than you might expect from a machine of this price range. It comes with XP installed (which is good for the masses, because its easy to troubleshoot and has good program compatibility). Emulators run very well. These make excellent seedboxes, VOIP systems, thin clients and home servers out of the box. Linux compatibility is decent (Mint seems to run well). These are cost effective units ideal for educational purposes (I will be loading our schools with these at the beginning of 2010). There are tax incentives (for those living in the US) and these qualify (check Acer Site for details). Whats not to like for the cost.

Cons: I have to agree with the rest of the reviewers about weak HD video playback. Its just too much for the single core atom by itself (Atom 330 is recommended). Streaming Video issues with Hulu etc. They seem to be working the kinks out though. Did not come with the mounting adapter (nothing industrial strength velcro wont fix though). No internal wireless antennae prewired in the case. This would have been nice since most laptops came with them even thought they didnt have wireless cards installed internally. They should have factored this in for future upgrades. Those who do not understand RF will be S0L unless they use USB adapters. --When using the Mini PCI you have to run your antennae leads to the locations outside the sheilding or you will have NO Signal--

Overall Review: You really cant beat this unit for the cost. I would recommend installing Windows 7 so you get the full capability of the ION chipset. Direct X 10 just to start off. You're essentially robbing yourself by running XP. If your not a moron you shouldnt have a hard time getting the absolute latest drivers. For about 40.00 you can updrade this with more memory and an internal wireless adapter. I installed another gig of memory and a cheap broadcom wireless adapter I scalped from one of the laptops I had laying around. Runs very nice. Perfect for HTPC use.

Pros: This machine is perfect for runnin XBMC Live. It can be setup in 30 minutes to be a fully functional HD streaming machine. The machine itself is very quite, there is an initial fan burst when the machine is turned on and then nothing. Havent had any issues running 1080P movies with video processing through VDPAU even with 1GB of RAM (I did set the video card RAM to 256MB). This really is an amazing machine for the price and especially the size.

Cons: The preloaded XP comes with tons of bloatware.

Cons: Case is hard to open.

Overall Review: Just received my AspireRevo today and loving the little guy. Running XBMC on linux with no problems so far. Watching 720p, and 1080p videos easily. Was trying to open the case to install a wifi pci express card and another 1 gig ram. To remove the case: remove the screw at the bottom and then use a flat head phillips to pry the case open. The side to open is the one without the power button. ***Caution*** The hinges on the inside isn't unbreakable, so if you do open the case, remember to do it nice and slow.

Pros: - Easy to upgrade memory (carefully pop off the top with a thin blade). I "added" a 2Gb stick for a total of 3Gb. - Quiet and small but still peppy. Windows XP runs well once you uninstall all the bloat that comes with it (easily done through the control panel). - Plays 1080p media files without a hitch. - ESata connector so you don't necessarily have to upgrade the default HD. - Plenty of USB ports.

Overall Review: A quick note to everyone wanting to use this as a media player--everything works great (VLC, Netflix, etc) except Flash. Hulu/Crunchyroll fullscreen plays choppy for me (even standard def). The one caveat is that I'm using a 24" 1920x1280 monitor. If you have a smaller resolution it might run OK. The good news is that they just announced that Adobe and Nvidia are releasing an Ion accelerated version of Flash; the bad news is that it might not be out till 2010, so pick your poison. For $200 is a sweet deal for an "internet/media" box even with the Flash problem. If you already have a nitch that this box can fill, then get it. If you're just browsing for a small media frontend then I'd hold off for a 330 or until Adobe upgrades Flash.

Cons: bloatware. I'd recommend OS reinstall and tweaking to get the most out of it. 1/8th audio jacks should be on back with the rest make them hard to use if you want to tie them into older audio system. Fine for headphones. Key and mouse are not wireless ... not that you expect it for the price but you really need it for HTPC.

Overall Review: If your not playing HD video 720p+ smoothly your - NOT DOING IT RIGHT - . You need the new drivers AND the new Codec Packs that support ION decoding. This thing plays 720p with 6% CPU. FLASH NOTE!: For some strange reason the newest Flash 10.1 beta (beta 3) doesn't work as well with the revo 1600. Search the tubes and get Beta release 1 from someones archive. With beta 1 HULU plays HD no problem. With BETA 3 Flash is jerky.

Pros: -Small form factor, quiet, and reasonably priced -Handles 1080p video well (with the proper codecs and adjustments) -Low power means it can pretty much be left running all the time

Cons: -Like everyone has stated, tons of bloatware -Some of the ports feel a little misplaced when the unit is lying down, rather than on the stand -Weak processor

Overall Review: -Had a lot of trouble getting this thing to play 1080p content effectively. Some videos played well, while others were choppy and stuttered. After installing 7, adding the proper codecs, and tweaking MPC, everything finally seems to be working properly and using less than 25% of the CPU on playback -Didn't have any of the HDMI sound issues that a few others mentioned on my Samsung -Upgrading the RAM isn't particularly difficult and an extra gig does seem to help, especially in Windows7 -Overall, I'm happy with the purchase, has the makings of a good HTPC, especially considering it's low cost.

Pros: small, cool running, and QUIET! put it right next to the TV and you'll never hear it. my wife was amazed it was actually a computer. it's so tiny and neat looking as well. looks great next to a plasma. comes loaded with XP home, ready to roll right out of the box, after the 5 minute setup. booted relatively fast (though slow next to my dual core win7 machine), but hey, it's a single core 1.6Ghz processor, with 1GB of ram.

Cons: -first off, this thing is LOADED with bloatware. loaded. not an exaggeration. like, 20 different stupid games, free trials, etc etc. took me about 30 min to delete all this superfluous junk off the system. why not give us a disc with all these unnecessary programs? booo acer. - couple of tough mods on this system. changing out the hard drive is tricky. i can't tell if the drive is actually adhesive mounted to the board as well as torx-ed in. i only spent a few minutes trying to remove the drive, but was unsuccessful. there were three exposed TORX screws that held the drive on the board. after removing them (yeah, yeah; warranty schmarranty), the hard drive had no 'play' to it, as if it were physically 'stuck' to the board...weird. so i didn't switch it out. memory was really easy to get to though. the processor is really tough on flash video. youtube, hulu, all those sites will give you some jaggies and render issues while watching them. it's not a powerhouse.

Overall Review: one big difference right off the bat. Newegg specifies that the memory capacity is 1GB, and has two slots. the second part of that is right. just for giggles i picked up a 2gb stick of g-skill memory in the event that it would work. the revo comes with 1 stick of 1gb ram. i simply put the 2gb stick in slot 2, and turned it on, and voila! now i have 3gb of ram. this pc is totally worth it so far. get one.

Cons: - I wish it had a built-in IR sensor. - Ports littered all around the perimeter of the case, but I only need the ones on the back, so no biggie. - Power button can be tricky to press/activate.

Overall Review: I bought this specifically for the purpose of installing XBMC and playing high-def 1080p movies. After spending a week trying to get XBMC Live and Linux working, I got it mostly working but movie playback wasn't perfectly smooth. Others recommended installing an extra 1GB of RAM, but then I tried XBMC for Windows. That isn't optimized for the graphics chip in this box, but it does allow you to launch an external player for video, and MPC-HC works great. Perfectly smooth, and quite seamless integration with XBMC. Unless you're already experienced with Linux, save yourself the trouble and stick with the XP install this comes with and do what I did. My biggest gripe is the lack of built-in IR. You can buy a USB IR receiver / remote for $25, but it would be nice to have it all integrated. Others have complained about Hulu playback, but that should hopefully sort itself out once the ION-optimized version of Flash is released next year. This box would probably also make a grea