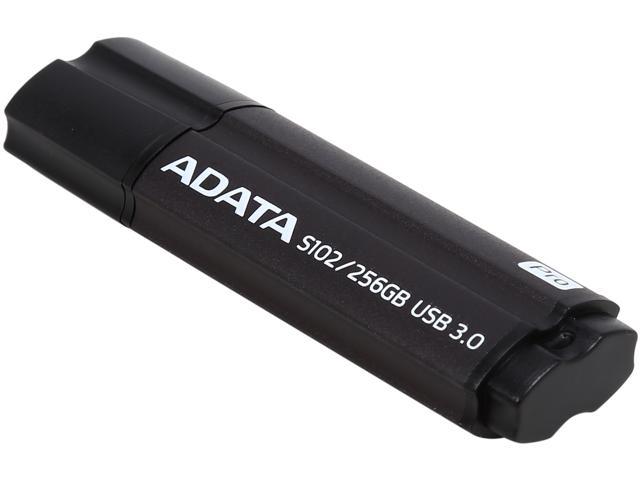 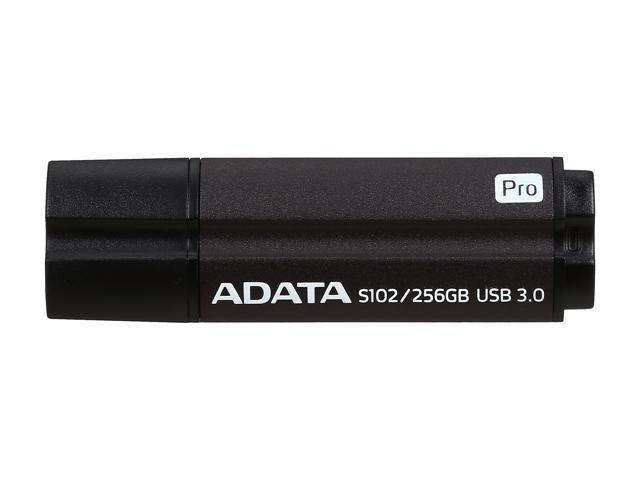 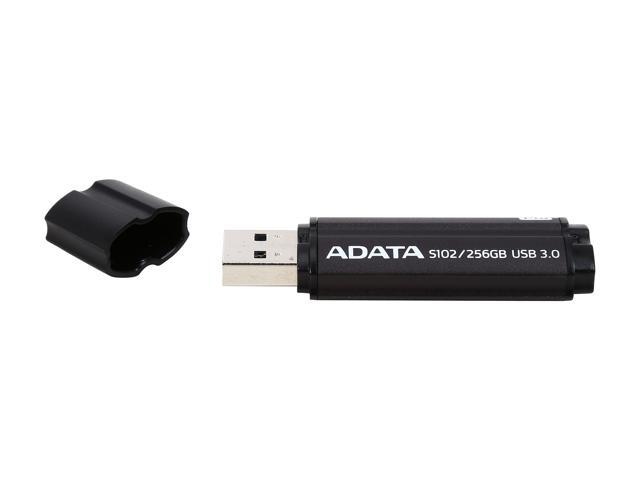 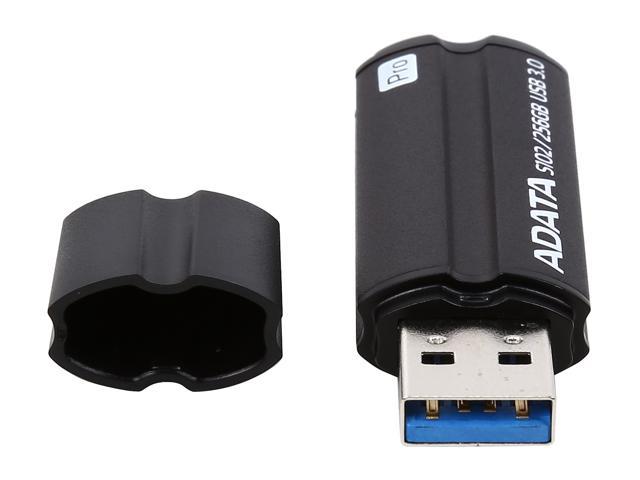 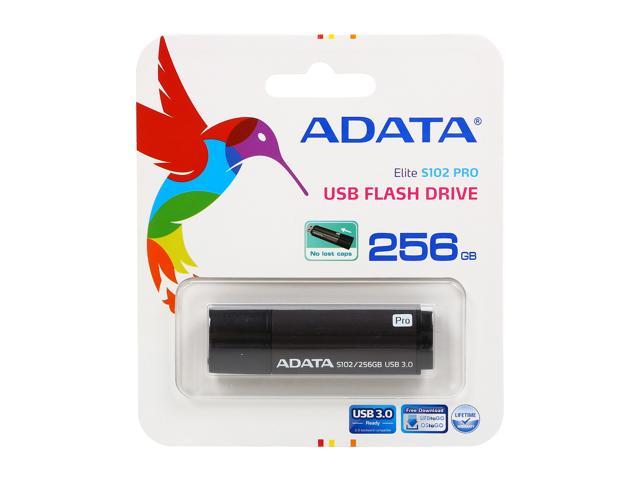 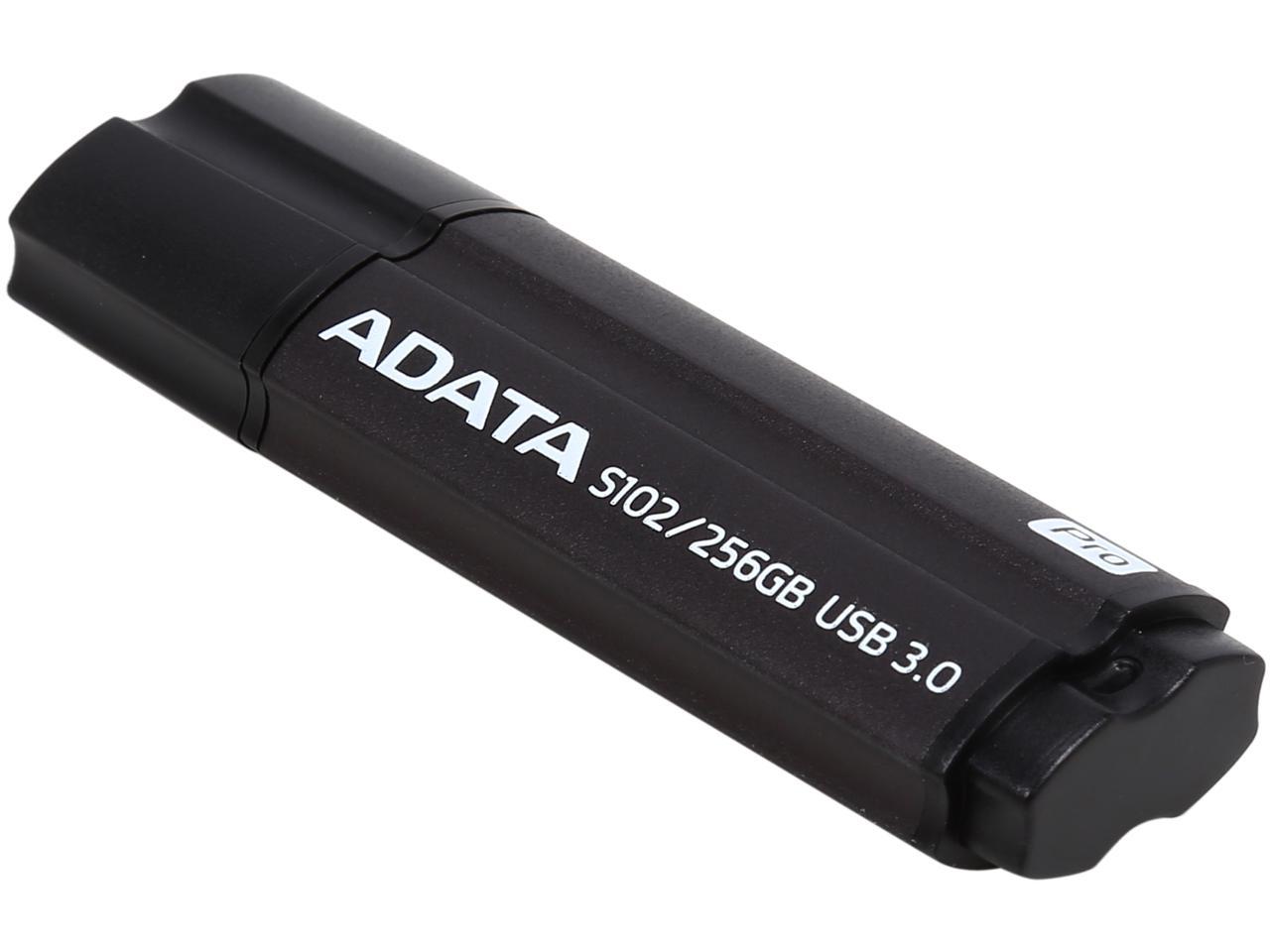 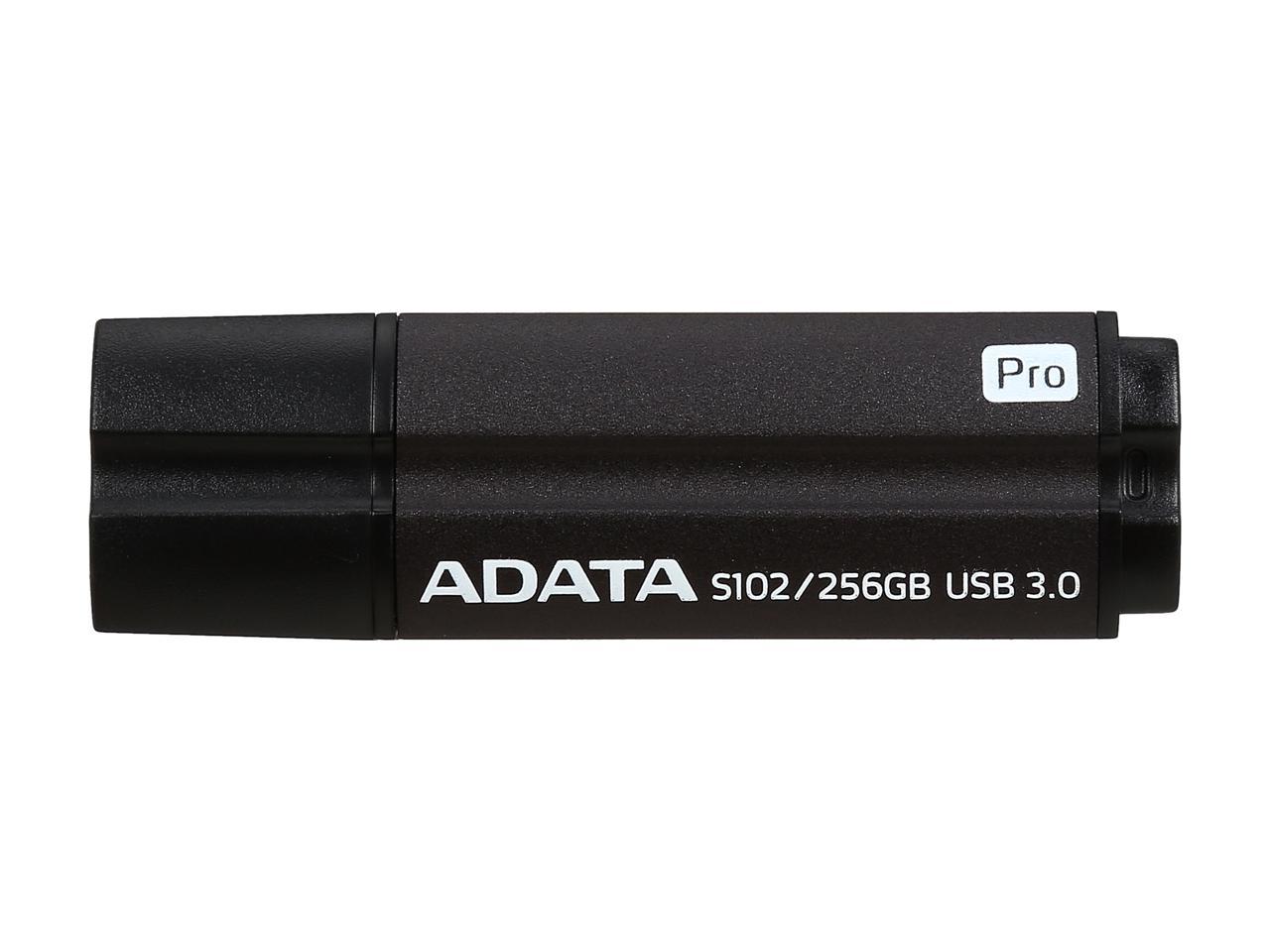 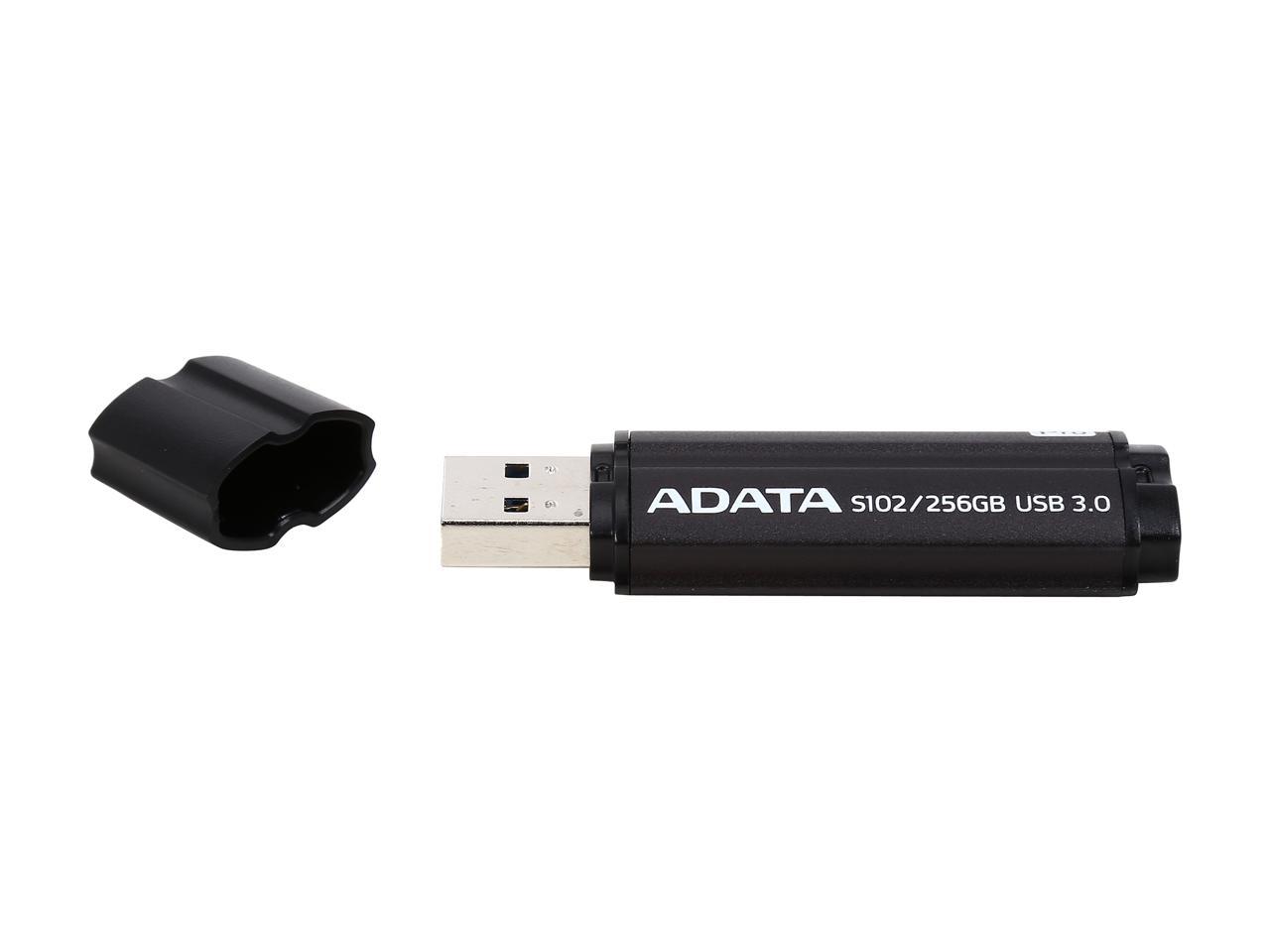 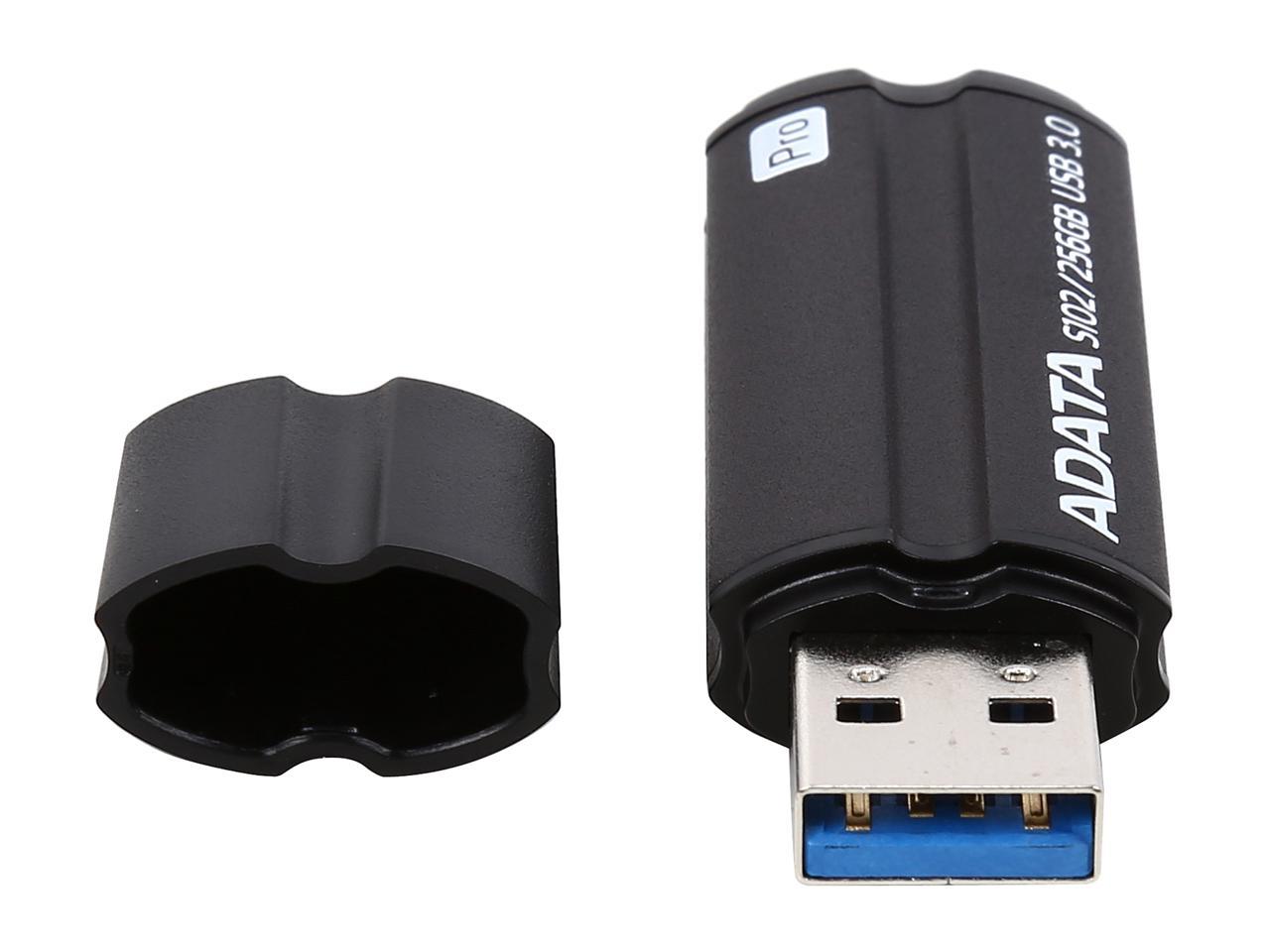 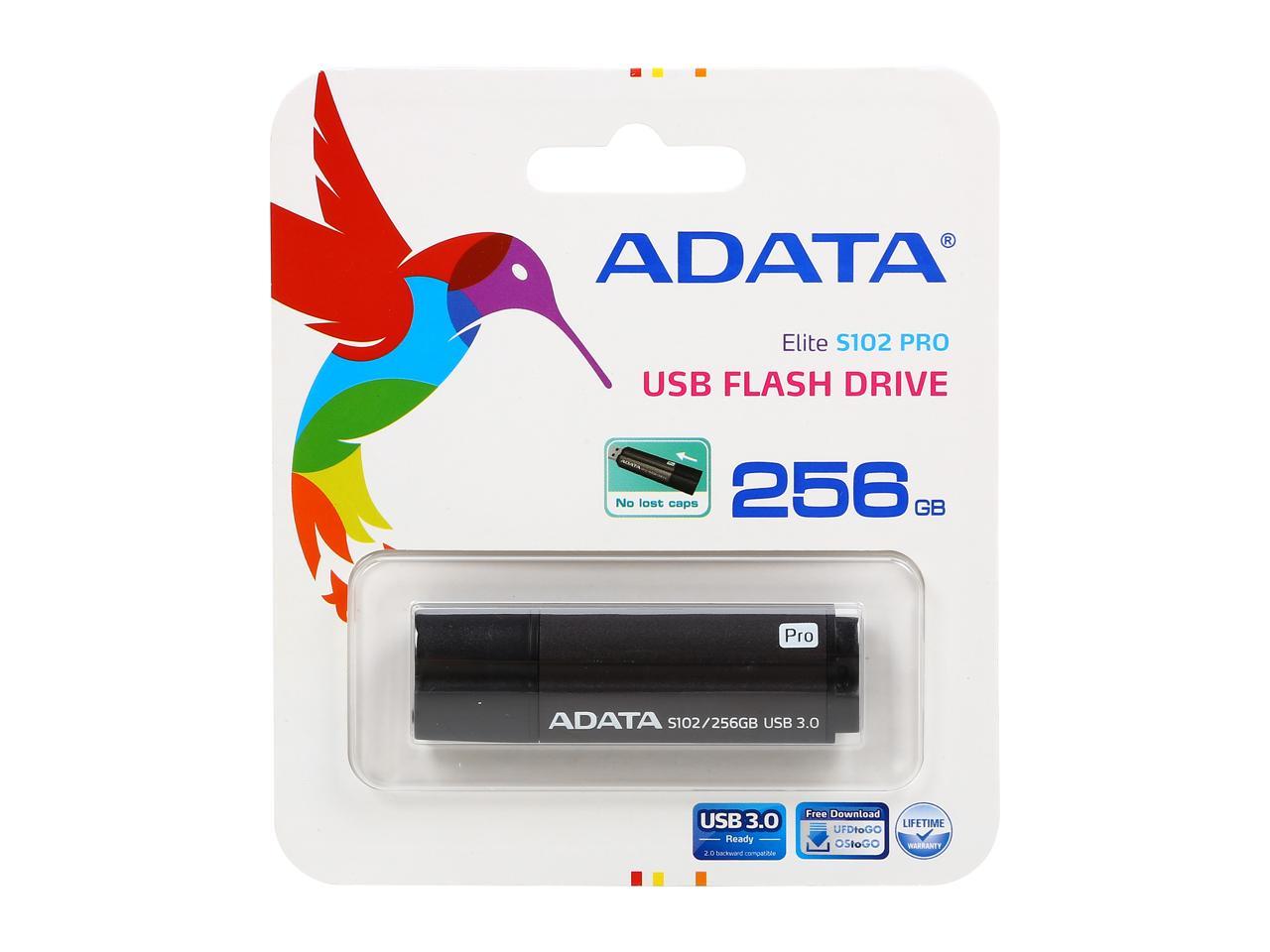 A wonderful successor to the S102, the ADATA S102 Pro USB 3.0 Flash Drive offers an attractive combination of aesthetics, performance and affordability. It continues with the finely textured aluminum alloy casing of the S102, but with performance increased to a new level. The cap can be snapped at the other end when in use. The S102 Pro comes in capacities ranging from 8GB to 256GB, giving professional-grade storage capacity and great value for your high-speed experience. Meeting the Challenge of High-Performance Value

The USB 3.0 interface has become increasingly popular in the market, and the S102 Pro uses the latest USB 3.0 transmission interface with read speeds of up to 200 MB per second, and write speeds of up to 120 MB per second. Compared to the S102, the S102 Pro transmission efficiency is increased up to 50%, thereby reducing the waiting time when working with large media files. With a modest price the, S102 Pro allows you to challenge the limits of cost performance ratios. Complementing the mystery and dignity for your personality, the fine textured aluminum housing has a striking appearance in an appealing titanium color (available in Titanium Blue and Titanium Grey colors). The cap can be tucked in the back of the drive casing when in use, preventing accidental loss.

Pros: Fast. Even on USB2 it's faster than any other USB drive I've used.

Cons: - I know I will end up losing the cap - There is a place for a lanyard, but does not come with one

6 out of 6 people found this review helpful. Did you?
Jason W.
Ownership: 1 month to 1 year

Pros: Sturdy aluminum body which is nice in case you drop or smash it. It should hold up pretty well. Exceeds the 100MB/s READ and 50MB/s WRITE speed listed. This is awesome compared to others that don't always hit their advertised performance. Over all a VERY good drive for the money

Cons: The cap clips on the USB end pretty well, but if you clip it on the back side it's pretty loose. Good chance you could lose the cap at some point if you aren't careful.

3 out of 3 people found this review helpful. Did you?
Sean M.
Ownership: 1 month to 1 year

Cons: cap comes off and can be easily lost

Overall Review: got this on sale for $10 Using a usb 2.0 port on my laptop (didn't have 3.0 at the time): I saw 8mb/s when transferring Photoshop CS6 installer (8gb?) went steady at 7.5mb/s for the rest of the transfer

1 out of 1 people found this review helpful. Did you?
Gift R.
Ownership: 1 month to 1 year

Pros: - Performs about as advertised...(FOR UNCOMPRESSED DATA!) -- Avg Write: 26MB/s -- Avg Read: 90MB/s - Fairly consistent across a wide range of CPU configurations and USB 3.0 chipsets (*See "Other Thoughts") - Cap secures to the back of the case - Slim design doesn't interfere with side-by-side nor stacked USB ports - Solid-feeling aluminum housing (but a plastic cap)

Overall Review: I benchmarked this using three different PC's... An Intel Q6600, AMD Phenom X4 975, and an Intel i7-3930K. Each system had a different USB3 chipset, which I've found on some USB3 devices can have a significant impact on performance. The benchmark app was ATTO v2.47. It was a pleasant surprise to find the average maximum write speed was higher than spec'd @ 26MB/s. The read speed was almost there, coming in at an average 90MB/s. On the i7 CPU, it did hit a peak of 96MB/s, but only once and that was at the end of the testing. The AS-SSD (V1.7.x) benchmark was pretty miserable. It didn't "fail it" in so much as I didn't even bother letting it finish. The 4K Writes weren't even registering after letting it run for a couple of minutes. So don't expect great speed if you are using this to move compressed media file formats like MP3, JPG, MP4, etc. This USB stick really works best when it uses compressible data like most system files and general office files. I use it as a bootable device for loading Windows and other utilities. In that capacity, it really shines with it's fast read speeds. I was able to get this on a NewEgg special for $9 out the door. ($14 - $5 MIR) For $9, this is a great little addition on the cheap. The rebate said 8-10 weeks for delivery of the check. I mailed mine on 29-JAN and just received my rebate on 15-APR, clearly outside the 8-10 week period. I was waiting for my rebate to write this review since many people tend to base buying decisions on MIRs. As with most anything, your mileage may vary if you need to submit for a rebate. I'm simply giving my experience for this particular one.

7 out of 8 people found this review helpful. Did you?
Sean M.
Ownership: 1 week to 1 month

Pros: It works, price is pretty good, lots of music can fit on one of these

Cons: Has a cap that can be lost

Overall Review: I am using this product in my Honda Accord for music storage and it does its job - can't complain too much

2 out of 3 people found this review helpful. Did you?
Brandon W.
Ownership: 1 month to 1 year

Pros: Everything I need out of a flash drive: lots of space, fast transfer speed (USB 3.0), and a hole for my keys! I use it frequently for lots of things. I've put OSes on here, storage, PortableApps -- whatever I'm feeling during the week I suppose.

Cons: I'd rather have the keychain hole in the center of the bottom of the drive, but I'm managing OK...

Did you find this review helpful?
Noah F.
Ownership: more than 1 year

Pros: Solid Metal USB 3.0 - keeps up with current speeds for me Cap snaps on with good audible "yeah it is secure" sound

Overall Review: I really like the design of it, and it looks sleek. It fits perfectly between all of my other sticks if I plug them all in.

29 out of 29 people found this review helpful. Did you?