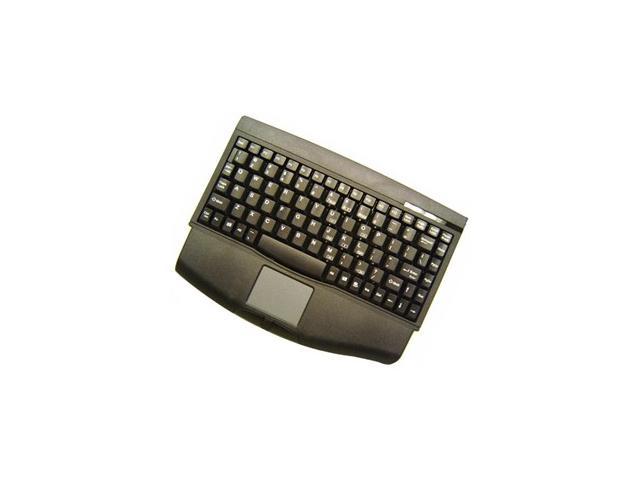 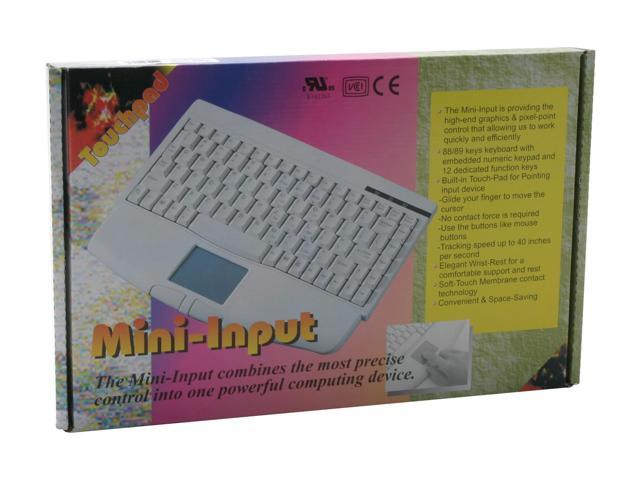 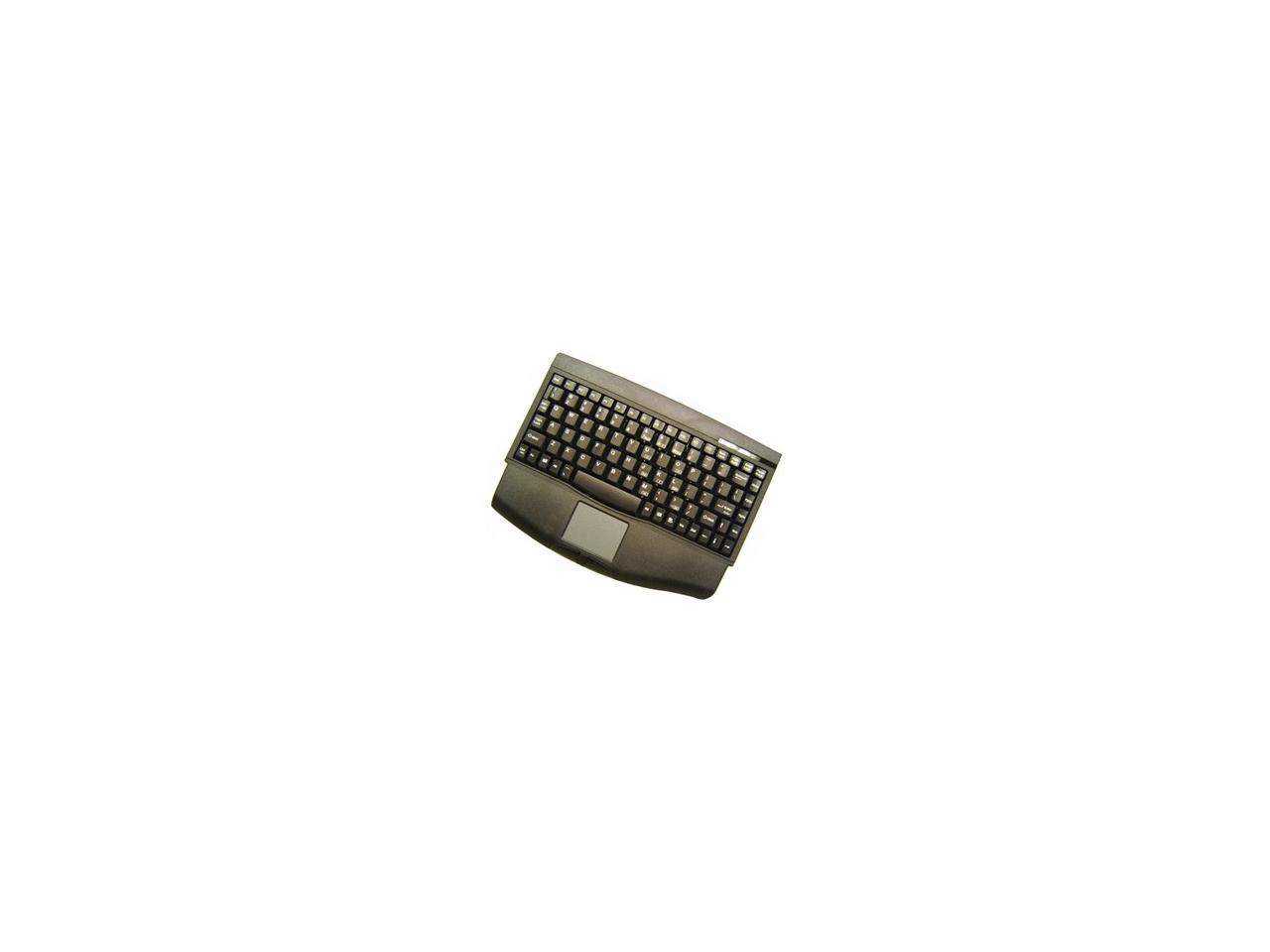 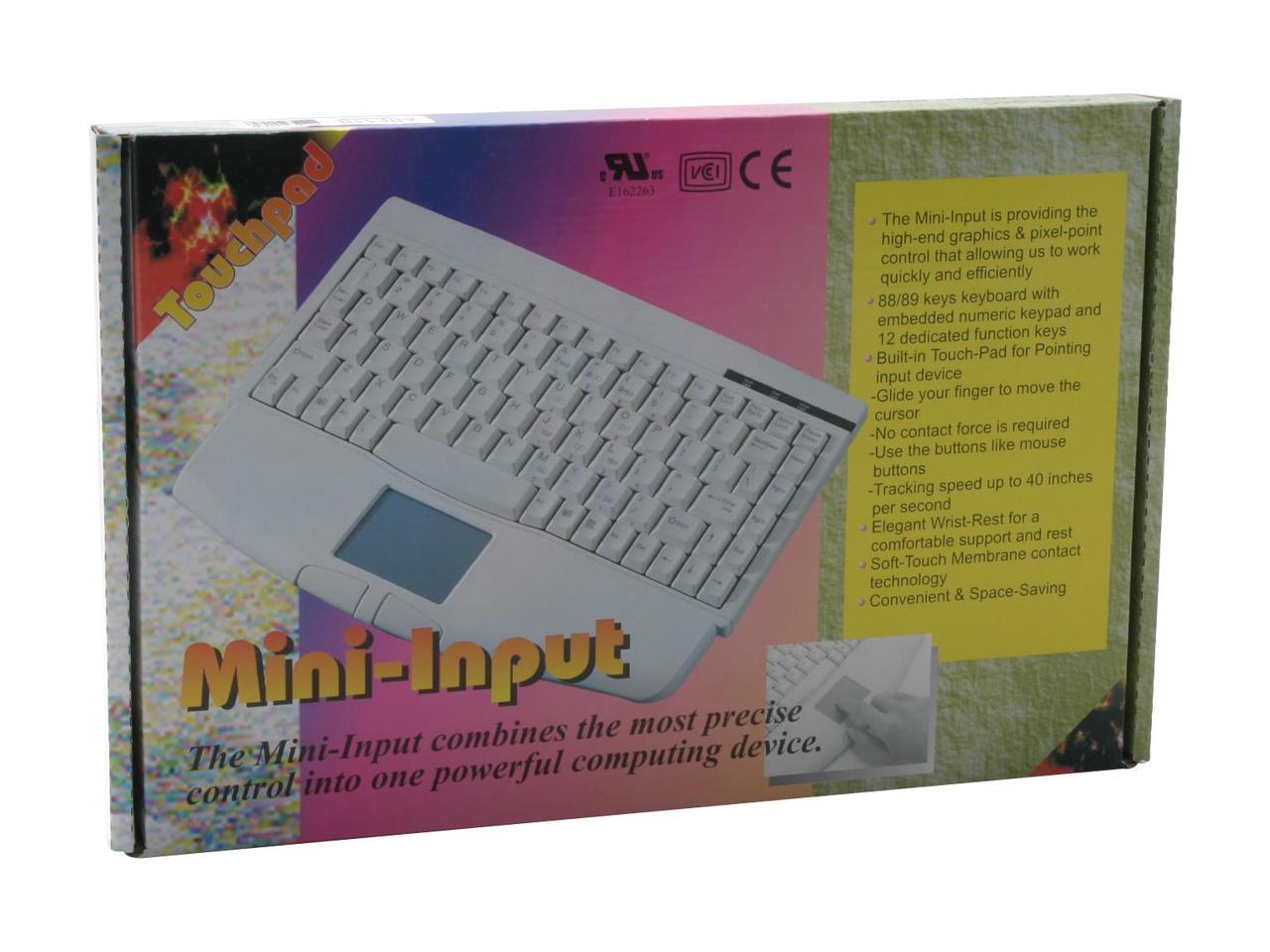 (4) Write a Review
See more "keyboard with touchpad"
OUT OF STOCK.
Overview
Specs
Reviews
The Mini-Touch keyboard combines the control of an integrated touchpad with the features of a standard keyboard to provide a small yet powerful input device.

Learn more about the Adesso ACK-540UB

Comments: This keyboard is very small and a little cramped with some odd key placements, but those are not too serious as issues. What's worrying is that the touchpad does not work for scrolling pages, unlike some of the other Adesso keyboards. This is not made clear in the advertisement. I emailed Adesso and they emailed me back to say that they have &quot;no plans&quot; to build a driver for this keyboard. Doh! The other problem is that whenever the computer comes back from standby mode, it loses the touchpad mouse and I have to reconnect the keyboard to get the mouse back. This did not happen with my other USB keyboard (Logitech).

Pros: Small, and the touchpad isn't too easy to hit like others! They easily fit inside a 17" rack slide drawer, with space to the side to rest your hand, or a graphing calculator or something similar size. Single USB plug and cable, no extra power connector necissary. I can confidently say we have bought dozens of this make and model, and they perform well under light or infrequent use. Under regular use, such as the one in my service console, they hold up well. Yes, we even have some where they keys are starting to polish! I'm not sure what the complains were about drivers, but our W7 and XP (RIP) machines installed them flawlessly. Given the timeperiod of those posts I suspect Vista might have had something to do with it.

Cons: These things are a bit more expensive, but they last. I just tested one a minute ago that we've had on hand for over 10 years! However, they are keyboards and tend to do the things that plastic switches do after collecting dust between the keys for a decade: they will eventually break. They are small, so daily use could get old for some. I have rather large hands, but I use one at the service console regularly without problems.

Overall Review: We use this model as our workhorse. We've bought scores of them. Some few have died, but many get the can o' duster and back in the ring they go! We use them for minimal systems that collect data and get some sort of interfacing once every couple of weeks. I wouldn't try to write a paper with it, but if I had to, it wouldn't hurt too bad.

Pros: I purchased this for use in a server rack drawer, and for that purpose it works fine. It is small, and the cable is long enough for this purpose. It is far from the worst keyboard I have ever seen or used. It appears well built, and the keys feel solid.

Cons: I would not like this to be my daily use keyboard, but for limited use applications, this thing is fine. I wish there was an application to disable the touchpad "tapping" feature, but I never got around to trying to use another manufacturers drivers, they might work?

Overall Review: I did not purchase from NewEgg, I got it locally for about the same $55. If you need a server room keyboard, this one will do nicely, and the built-in touchpad does well for a mouse replacement. I bought this for a customer I do work for, but I will get another for my home rack.

Pros: Small size with a touchpad.

Cons: If I only had one I would think that maybe I got a bad one but I bought two of them. One with the PS/2 connectors for my older computer and one with a USB for the new one. They both have the same problems. The touchpad is sometimes overly sensitive where the slightest touch with set it off and other times I have to give it several good thumps to get it to work. Not good. Sometimes (often) I'll be typing along and all of a sudden the focus jumps to the mouse. I've acquired the habit of parking my mouse pointer in a neutral spot so when it happens nothing else will be activated that I'll have to undo. For the first couple of months I thought I was inadvertantly touching the touchpad with my thumb while I was typing and I just needed to develop new and more careful typing habits. Unfortunately that wasn't the problem. It's built into the hardware or perhaps a better way to say it is the bugs were not taken out of the hardware before being marketed.

Overall Review: I added a second computer to my desktop and found myself cramped for space. The keyboards hardly left any room for a mouse to operate. The Adesso mini keyboards looked like a perfect solution to my problem. That was why I bought two of them. The fact that two of them have identical problems tells me that Adesso is not a company that I should do business with in the future. I should have returned them but I kept thinking the problem was with me and how I was accidently doing something wrong. Six months down the road when the problems began to be seen more clearly, I could no longer find the receipt and the boxes long since gone in the garbage so I was stuck with them. I was looking for new keyboards when I ran across Adesso still looking for suckers and thought I'd give them my review of their product. In short: Adesso sucks! Those keyboards have been nothing but a pain since I've had them. I thought about selling them on auction site but that would be too dirty a trick.