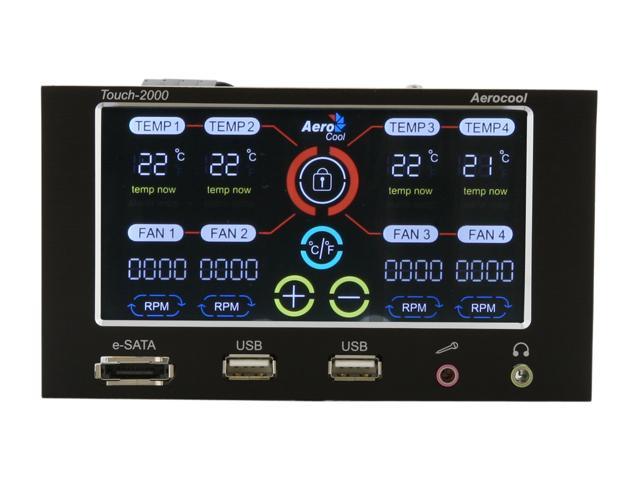 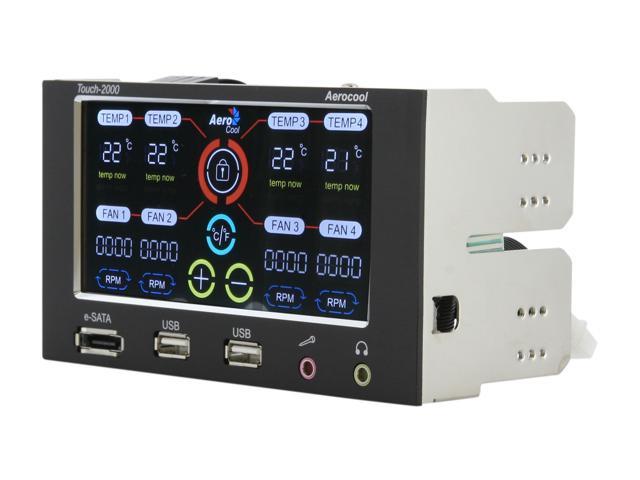 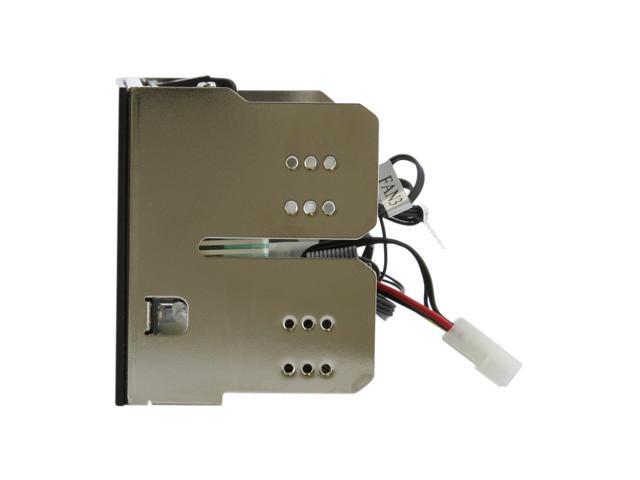 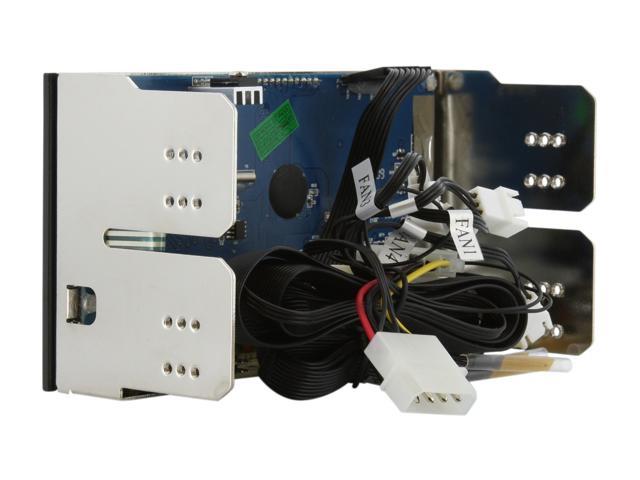 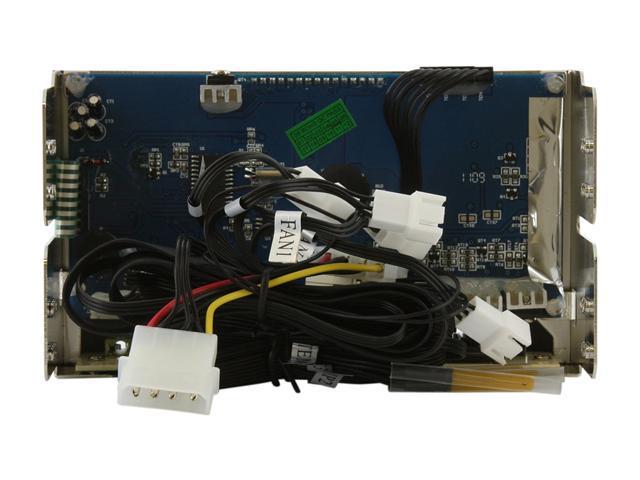 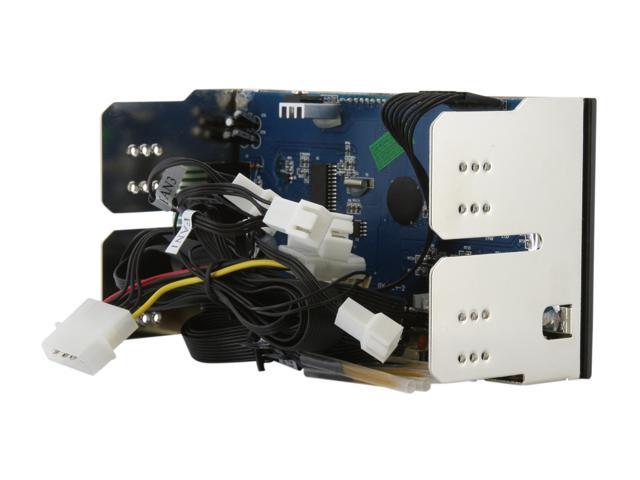 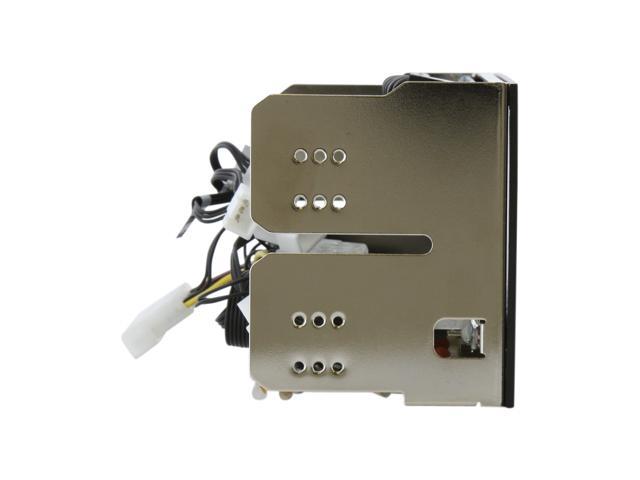 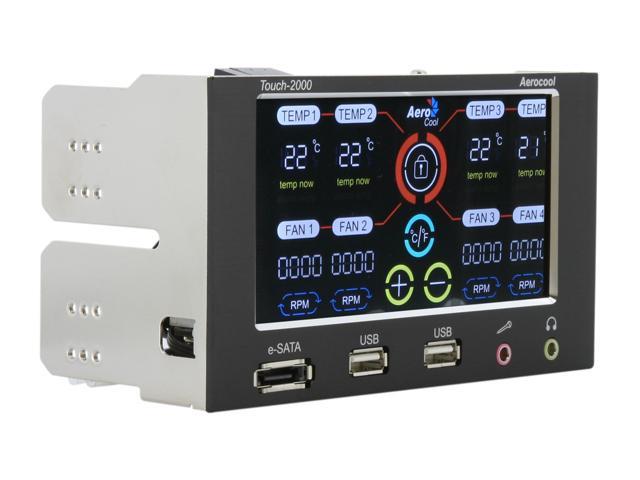 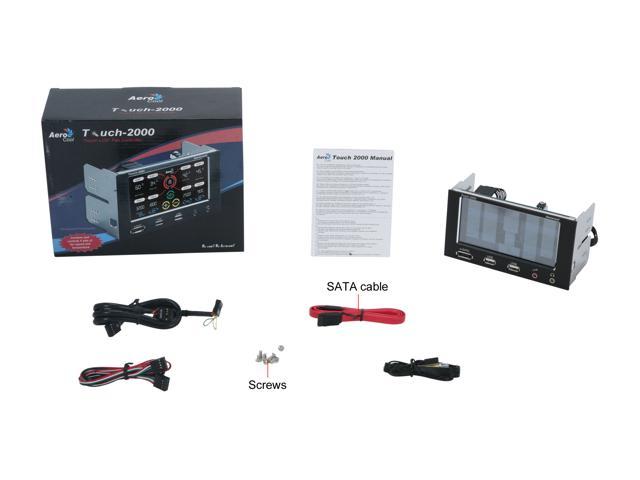 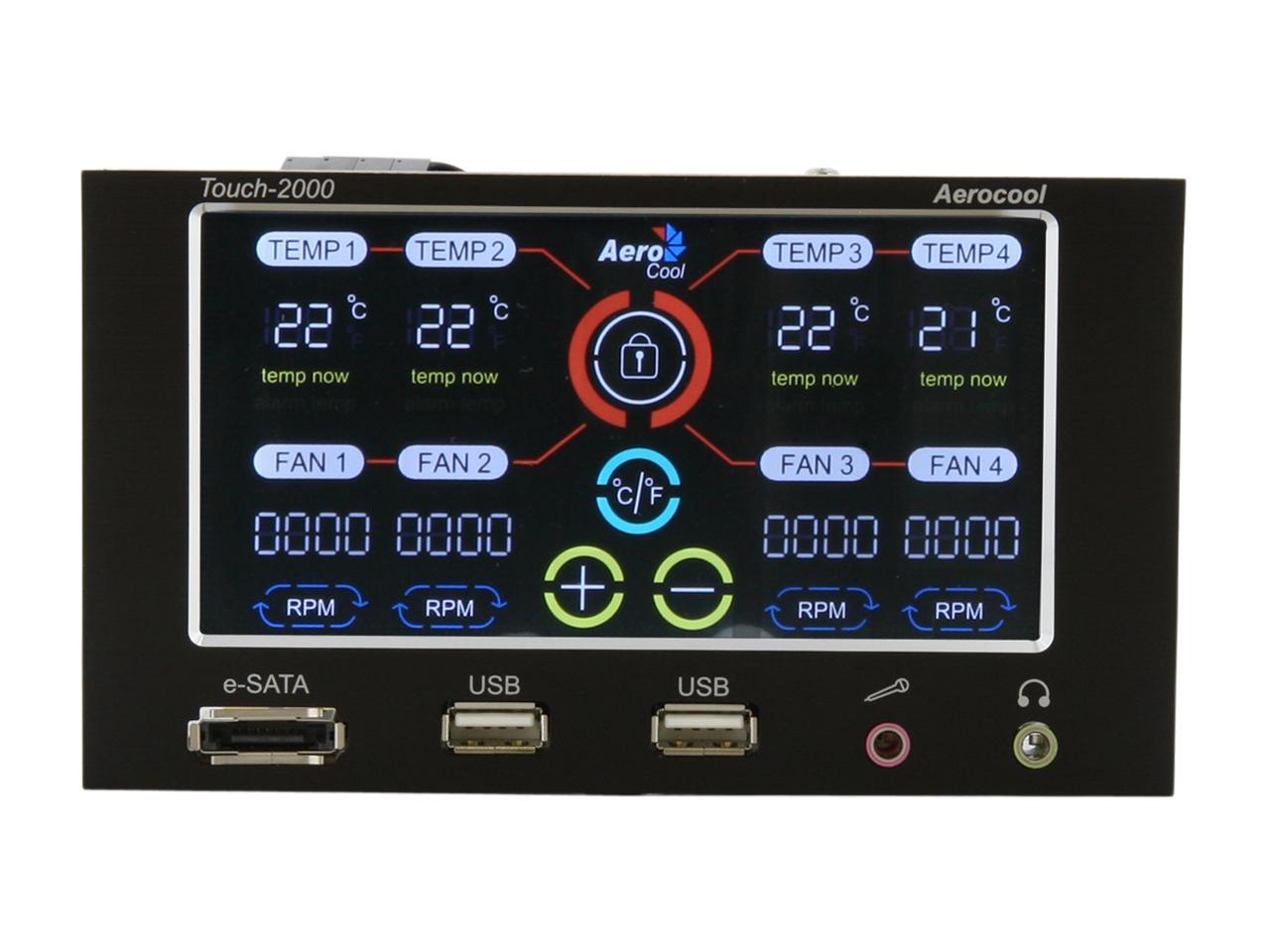 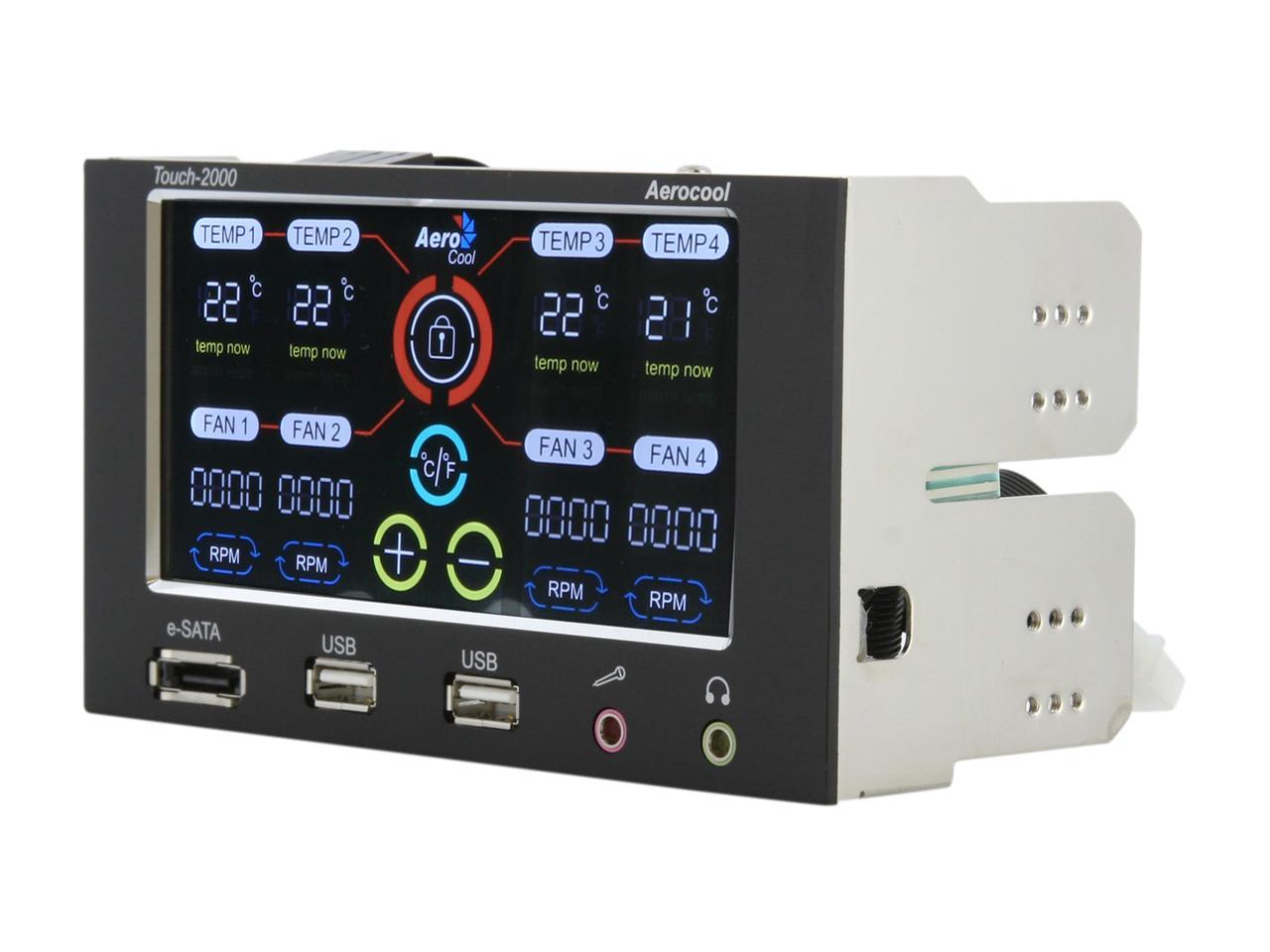 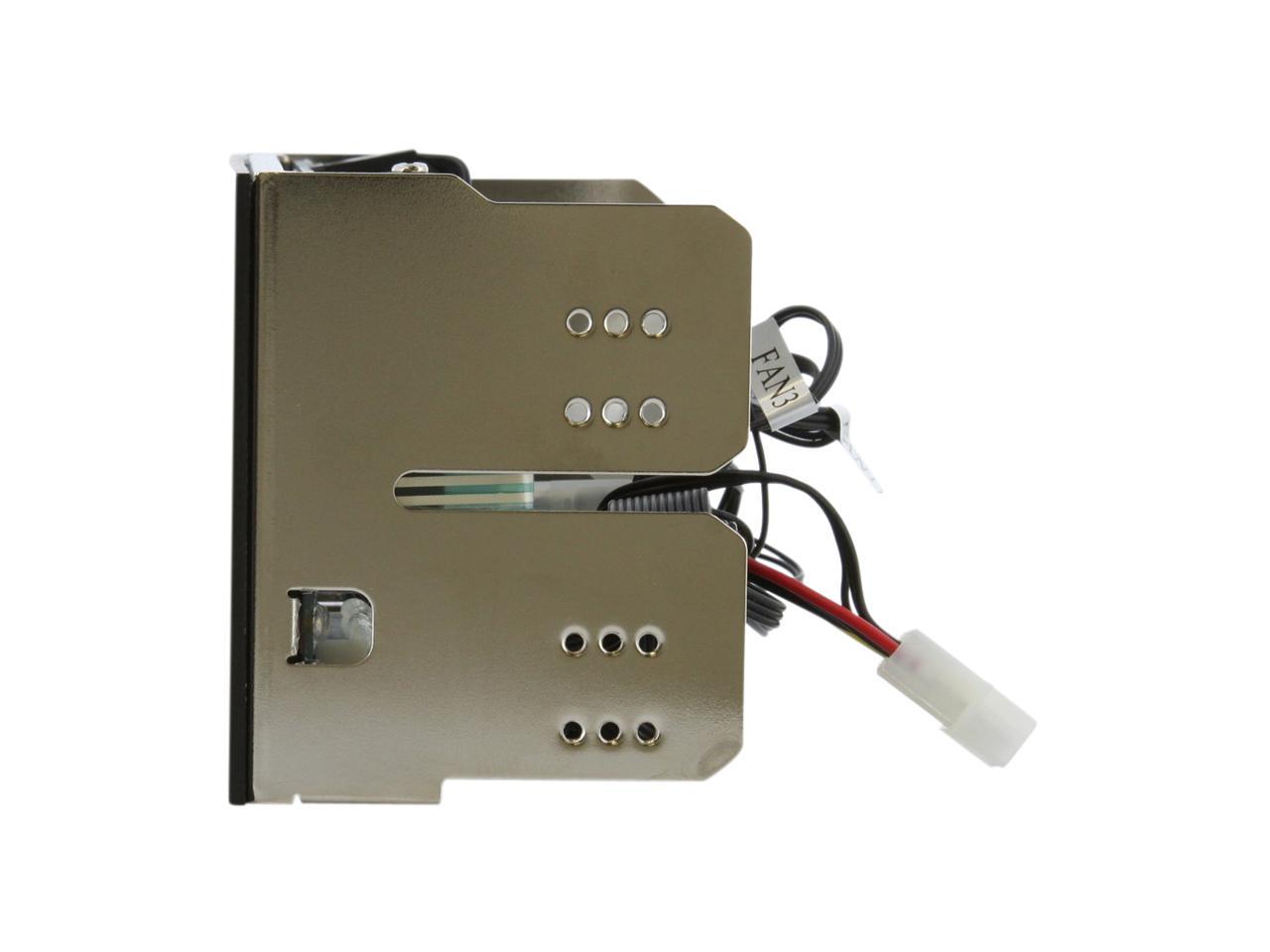 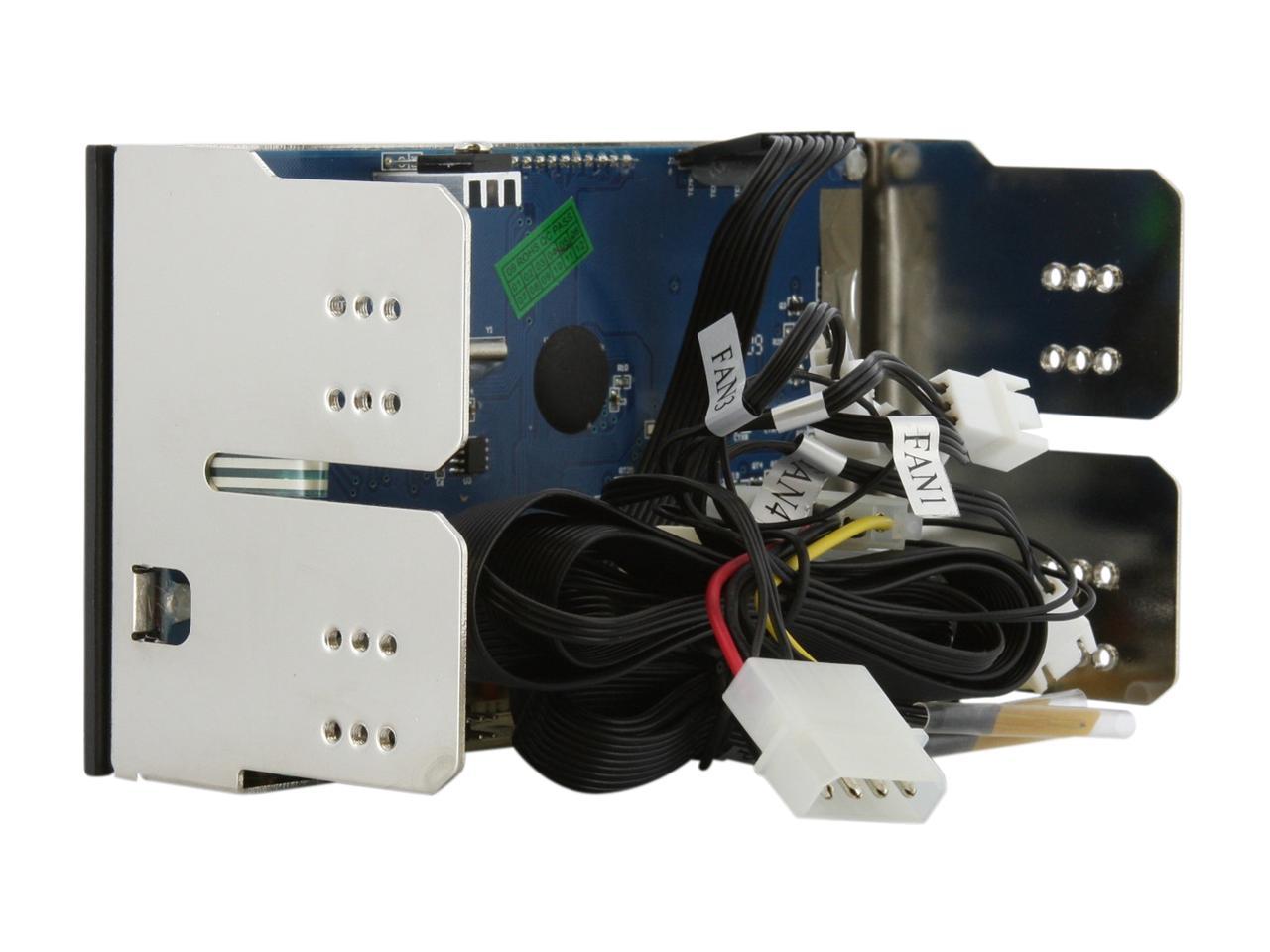 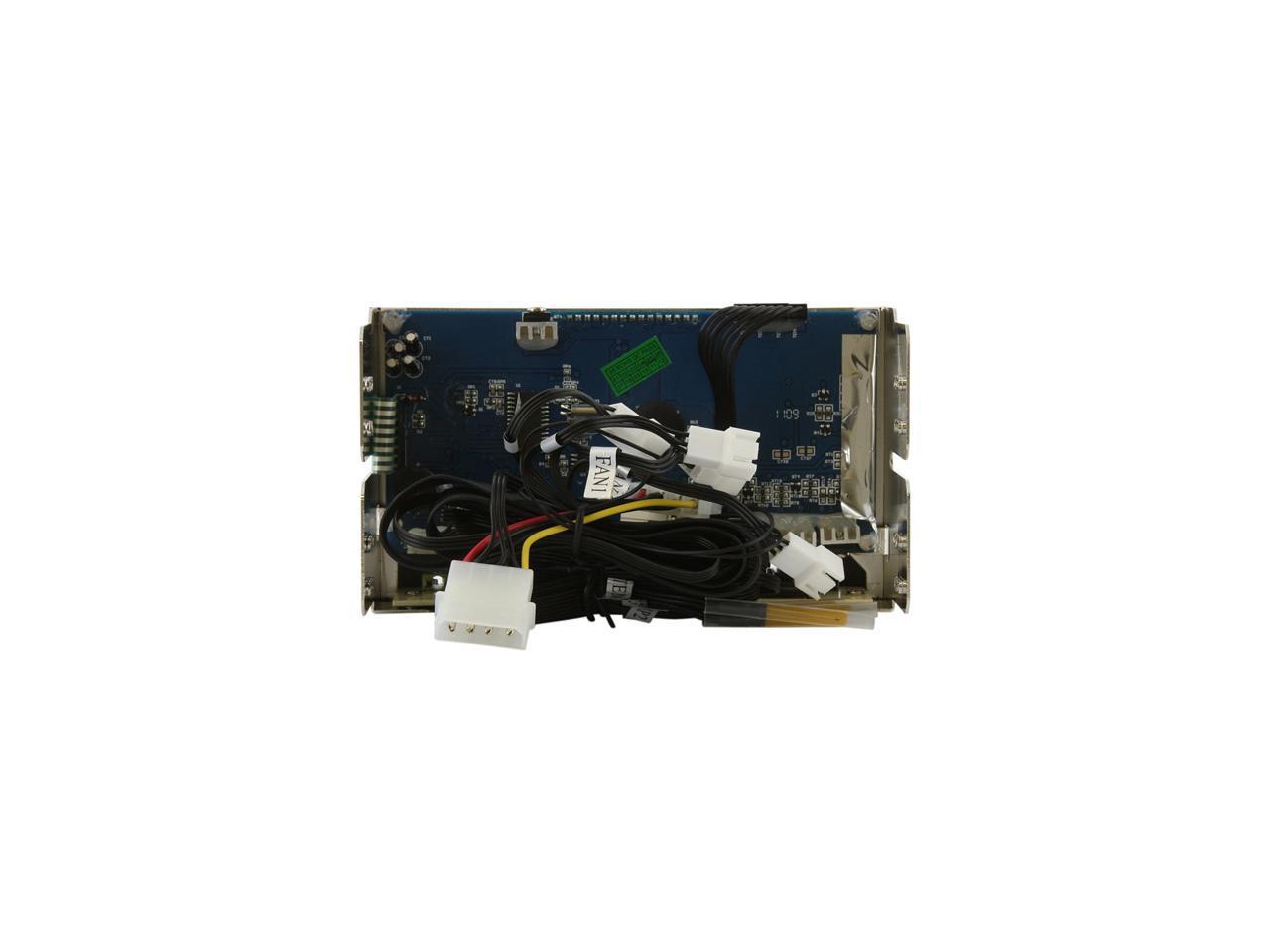 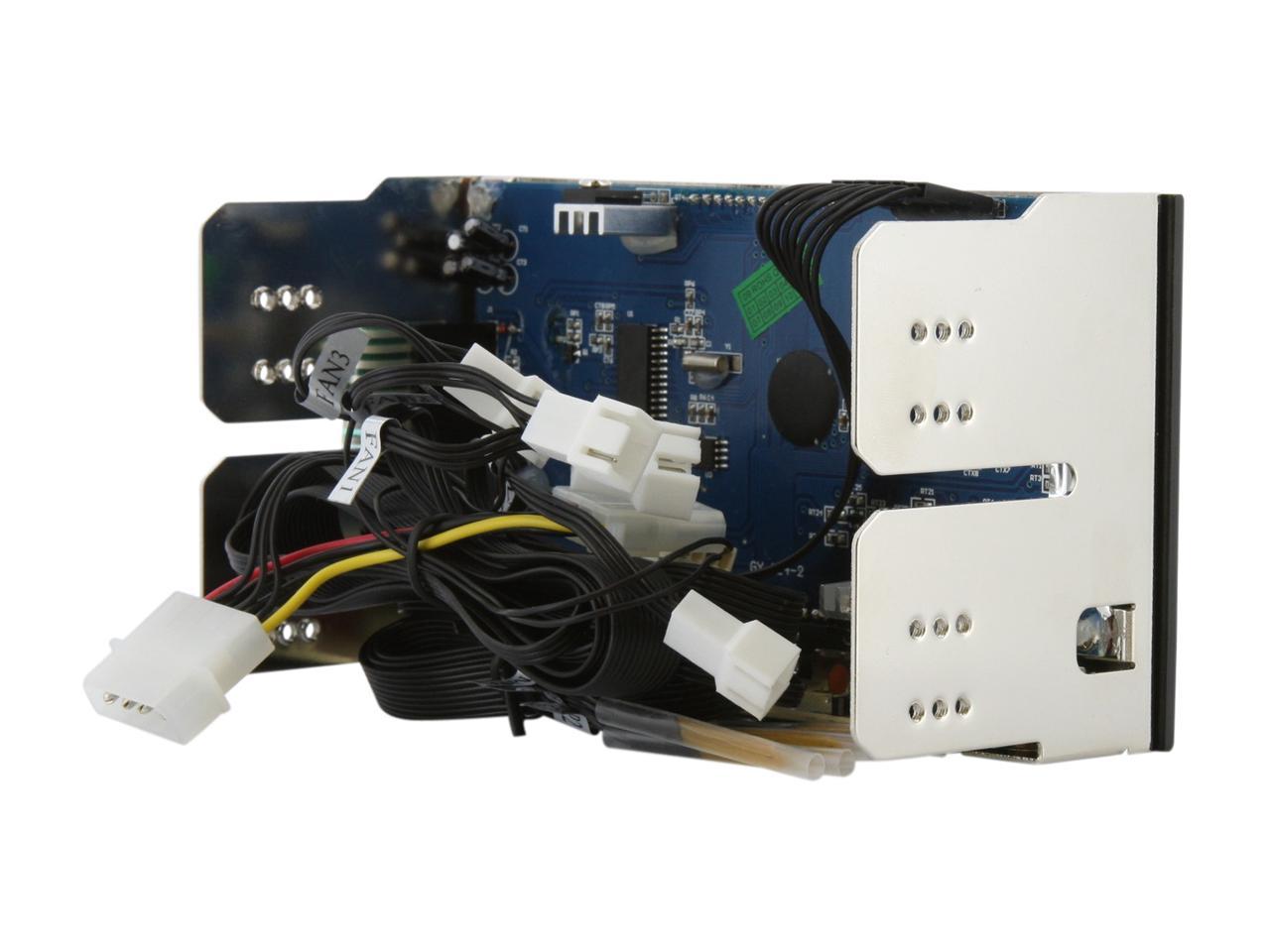 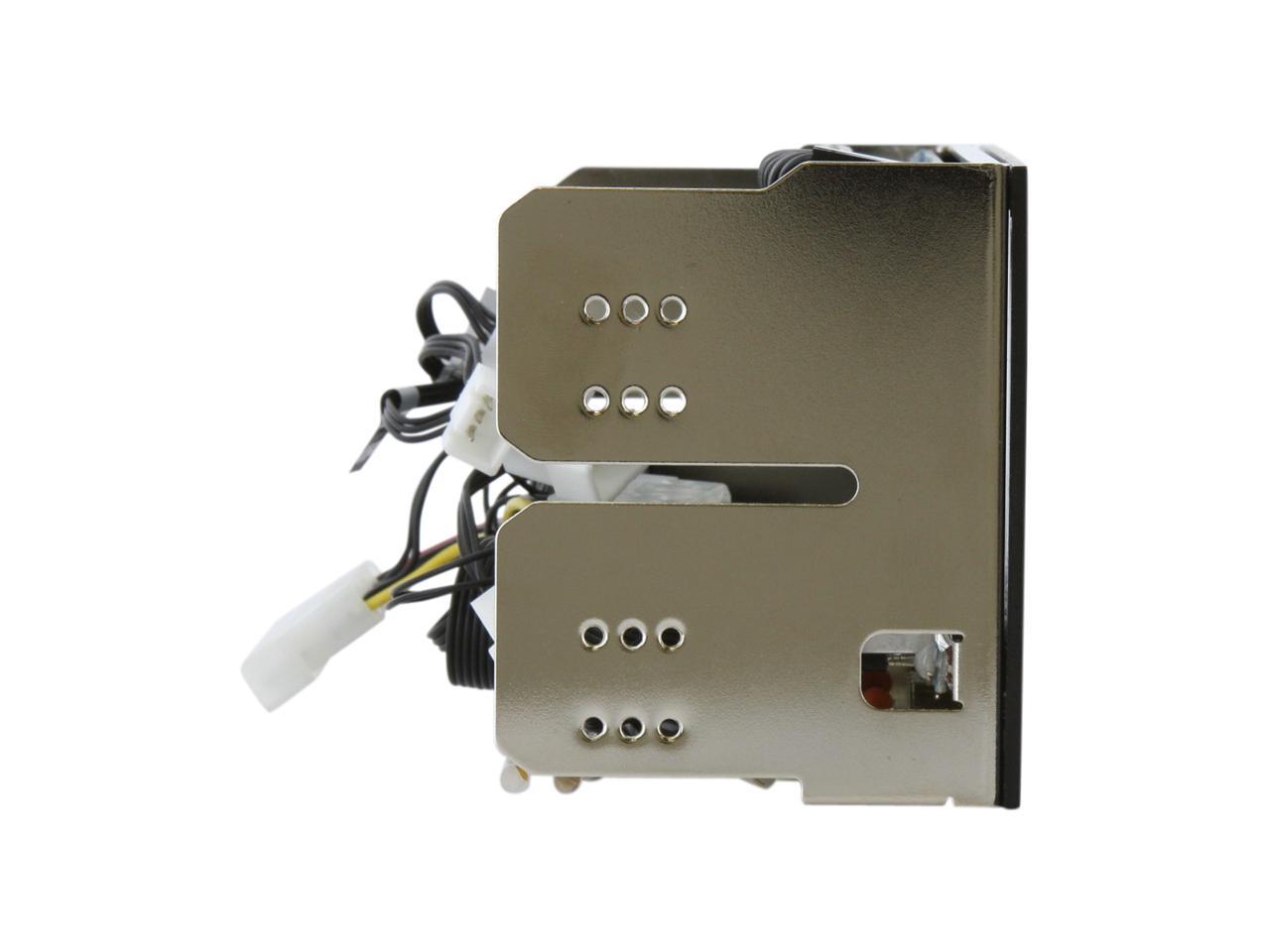 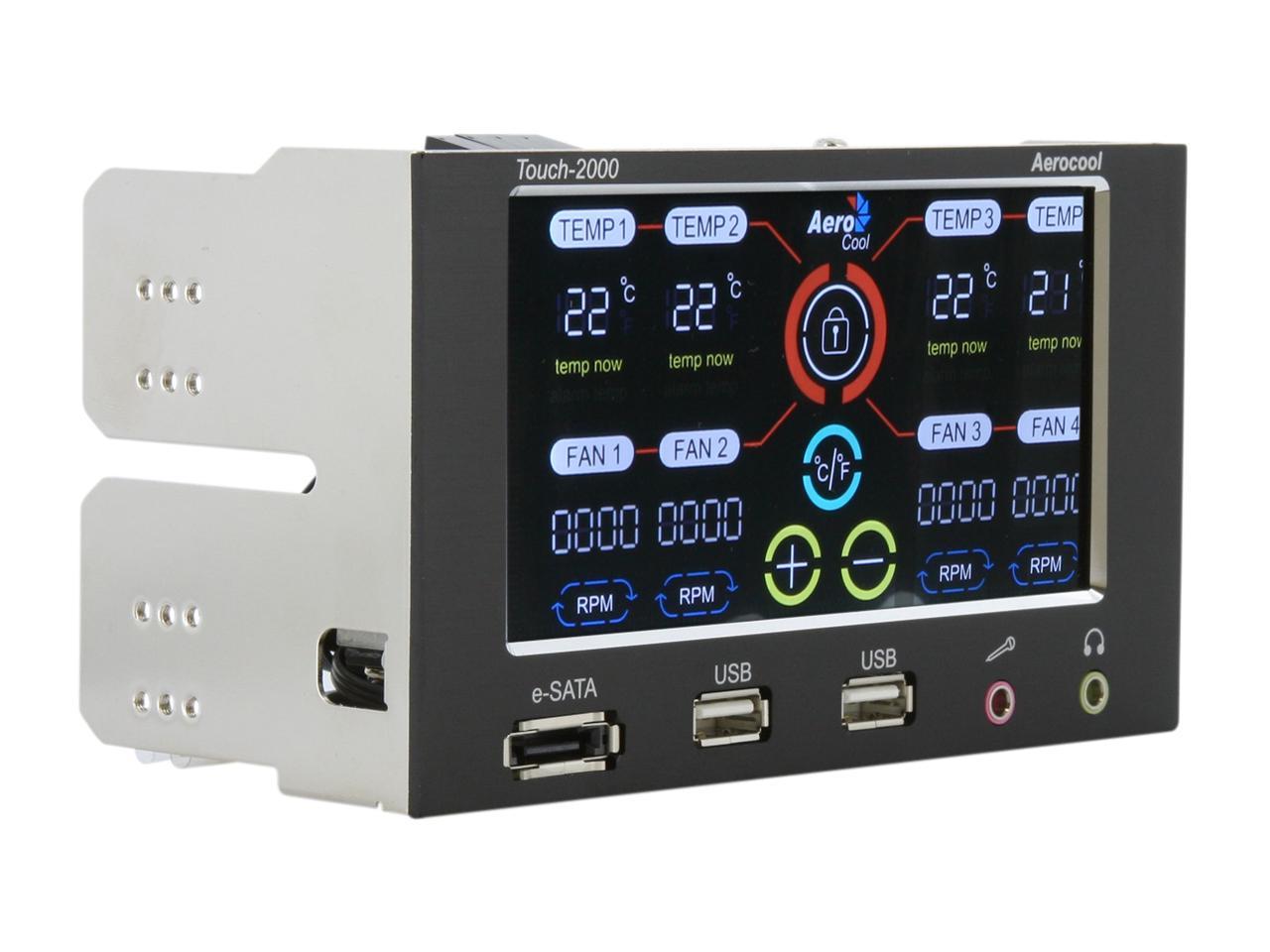 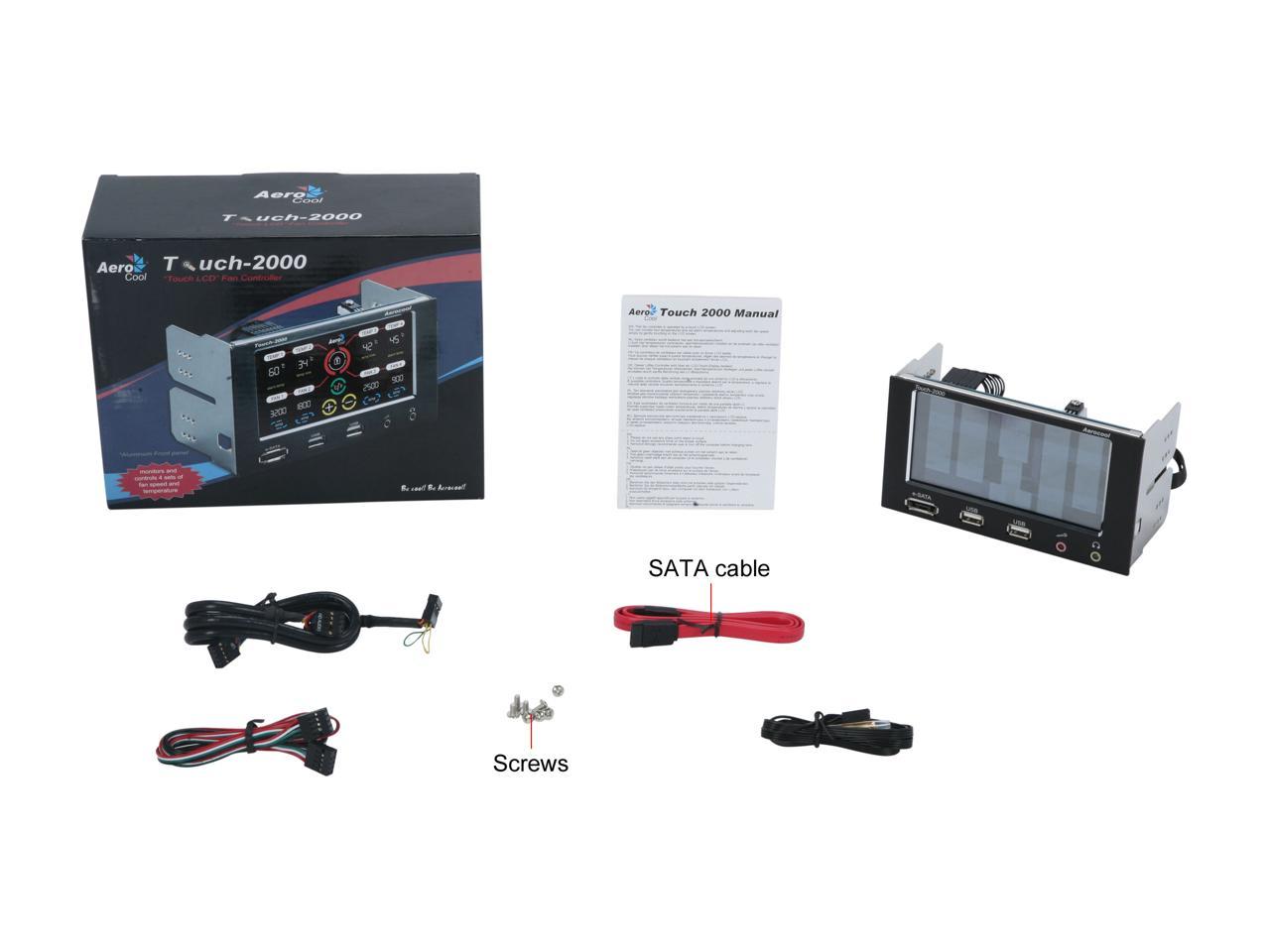 (84) Write a Review
OUT OF STOCK.
Specs
Reviews

Learn more about the AeroCool Touch 2000

Pros: Interface: The touch screen is surprisingly responsive and doesn't lag as one might expect from a $60 interface. The screen is quite resilient against dust and finger prints and the viewing angle from side to side is excellent. Aerocool did a fantastic job organizing the buttons, you won't have to worry about accidentally hitting a poorly placed reset button or some other similar mishaps. The lock feature in front is quite useful and the additional USB/SATA ports are a welcomed addition. Temperature Sensors: The sensors are quite accurate. I took measurements with an electric thermometer and compared them with the touch 2000's results. In the majority of cases, the touch 2000 was off by +/- 1-2 degrees Celsius. I found little use for the sensors however, since my main concern lies within my processor and video card, both of which are difficult to strap sensors onto for an accurate reading. Fan Controls: It works. Not much to brag about really.

Cons: Requires 3 pin fan connectors. For those of who you have molex fans and are thinking of buying adapters, be aware that it may not work, I had to find out the hard way and ended up replacing my case fans with 3 pins. You'd figure that by now companies would start offering fan controllers that are molex compatible. Viewing angles from top to bottom aren't as great as the sides. You can manage being elevated a few inches above or below, but if you are the type of person who keeps his PC tower near foot level or up on a shelf, you most likely won't be able to see the text very well. The adhesive tape that is supposed to be used with the temp sensors is somewhat weak. It works for the most part, however it falls off easily with even a little tension. Those who tinker inside their computers while the temp sensors are attached will need to be careful not to tug its wires.

Overall Review: I didn't list taking up two slots on your tower as a con since the product picture blatantly depicts the obvious. It shouldn't be a surprise. Final Verdict: An excellent fan controller if you are willing to shell out the extra cash. At $60, its justifiable, but for those of you who use multiple molex fans, you may need to factor in the price of replacement fans which can be somewhat expensive.

Pros: Looks awesome on a Haf X case. Temps seem to be relatively correct, one is way off but I think that's my own doing and I'll have to re-open up the case and try it again.

Cons: Alot of what should be lighting up on the display is not. Across all temps and fan speeds, the middle line doesn't show. so all 8's look like 0's and so on. Circuitry aside, the controller board in the back looks like my 2 year old neice slapped it together. This is the first board I've ever seen that has parts held on with glue from a glue gun. Which is why it should come as no surprise that several parts had fallen off either before or during shipping and had to be reattached. Touch controls seem to be touch and go... sometimes I can raise my fan speeds, sometimes not. The panel registers the touches (it beeps on touch) but there appears to be no effect at times. Fans 1 and 2 can't be pushed higher than 700RPM nor lower than 300RPM. Fans 3 and 4 can't be pushed any higher than 600RPM, nor any lower than 300RPM... This controller essentially wrecked my cable management, the wires were so tangled on arrival it was pretty well hopeless.

Overall Review: I'm not going to send it back because I don't want to pay to ship it. Some people said the screen was of good quality... I'm wondering if aerocool switched to a cheaper screen since their purchases? If you're on the fence about this DON'T. Sure its probably one of the better looking controllers out there, but better to have a fully functional one than a decoration. I will likely never purchase another aerocool product. Oh and, props again to newegg for the fantastic packaging. I swear I could have thrown the box against the wall several times before opening it and the contents would remain undisturbed.

Pros: Great design and easy to use once you learn the controls. Does everything it should and works as well as other reviews have said.

Cons: QC needs more work! When I got it I noticed fan channel 4 had some issues with monitoring RPMs. When a Fan was connected it would read about half the RPMs that the fan was running and indicated RPMs would decrease until it hit zero within 3 seconds. The cause was an extra capacitor bridged the gap between R1 and the circuit path above it. Scraped it off and it now reads RPMs properly on channel 4. Guess they didn't QC this item before sending it out the door.

Overall Review: BTW The lock button also unlocks alarm temps but you have to press and hold the button once toggled to alarm temp until they flash vs the quick touch to toggle fan RPM adjustment.

Pros: Works as advertised. Great cosmetic appeal. Used in Cooler Master HAF 932 case. Controls the front, side and top 230mm fans and the 140mm fan on the back. Easy to change speeds, but system runs so cool haven't had to change speeds at all. Control all four fans with the three pin plugs. Did need a cable extension for rear fan in order to use cable managment and keep it hidden and out of the way. Thermal sensors work as advertised, but some caveats for some users - see below. USBs work fine - cable long enough to be used with cable management and still reach the internal USB connection on my motherboard. Did not connect the e-sata, since I was using the one provided with my case. Did not use the mic/headphone for the same reason.

Cons: For some the temp sensors, while accurate, don't necessarily attach where you need for an accurate reading - you may be close but not right on. There was no tape or adhesive provided to attach the sensors, at least in my package. I attached near the cpu, on my main boot drive, on the memory and the video card. Don't believe its a replacement for your favorite temp/fan monitor software. Cable provided for mic/headphones was not long enough to be used with cable management. Side panels could be made a little longer to make it easier to install in a toolless case - had to fasten with screws rather than the tooless inserts. If you have less than 4 fans to connect, the display will continuously flash "0000" for the unused fans. There is no way to put it in a steady state short of turning off the entire display.

Pros: Hooked it up and installed everything fairly easily and It looked and worked great... for a while...

Cons: It completely stopped working at one point and I have not been able to get it working sense.

Overall Review: This purchase cost me $70.99 and I probably got a few months of functionality out of it. I would not purchase this product again nor would I recommend this to a friend.

Overall Review: I install it in my computer in 2010 and it never failed since. Very useful tool to set minimum fans speed according to room temperature (winter/summer).

Pros: ~ Goes great with my blue color fans ~ I really don't know why people are so flustered that there are no installation instructions and there are only interface instructions. Honestly If you are to dumb to figure out that it slides into the bays, then screws go in the side, then you shouldn't be building or upgrading your PC. ~ Very simple interface ~ Easy installation ~ Sufficient wattage for high perf 250mm LED fans ~ Nice "locking" feature ~ All cables were long enough for a mid size case

Cons: ~ Could have fit a little more snugly into the bays ~ Temp & RPM readings a little off (temp is on outside of component whereas software measures core temp) Altogether - 1 egg

Overall Review: ~The heatsinks are applied with glue, but its a front bay screen, it doesn't get that hot. ~ I really don't know why people are so flustered that there are no installation instructions and there are only interface instructions. Honestly If you are to dumb to figure out that it slides into the bays, then screws go in the side, then you shouldn't be building or upgrading your PC.

Pros: It looks nice in the case and it has USB ports which come in handy.

Cons: Just installed the controller today and it tried to fry my pc. After installing the controller and hooking all of the fans up to it I powered on my pc and I watched as two of the wires burned off their insulation and started glowing. I'm hoping this is just a random manufacturing defect and thanks to the power of Newegg I am just waiting to receive my replacement within the next couple of days and I will update my review and rating then.