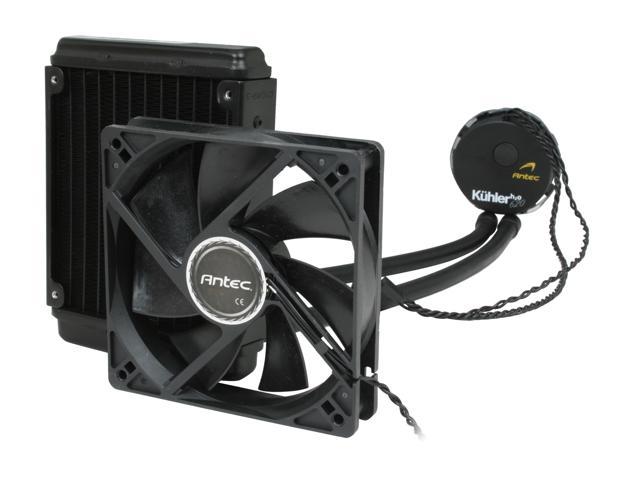 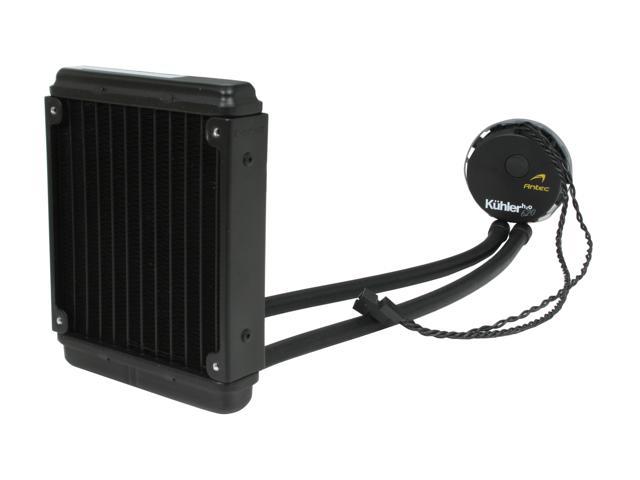 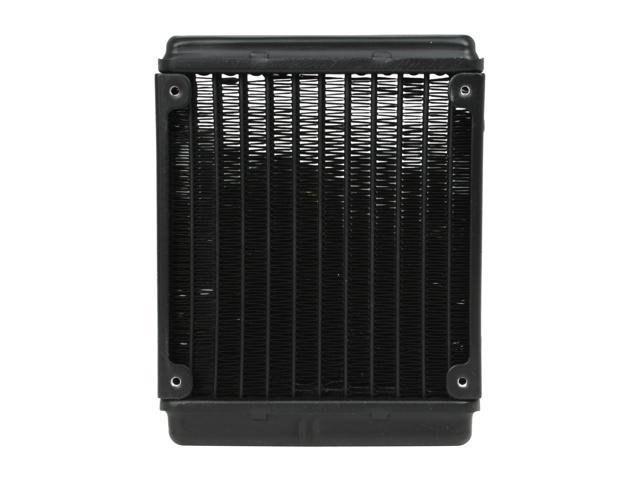 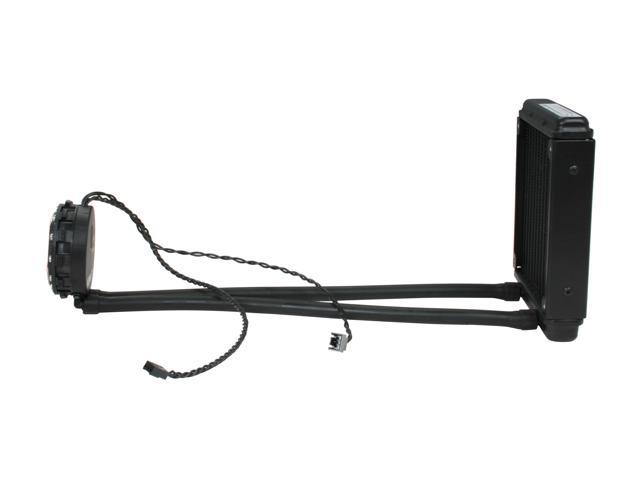 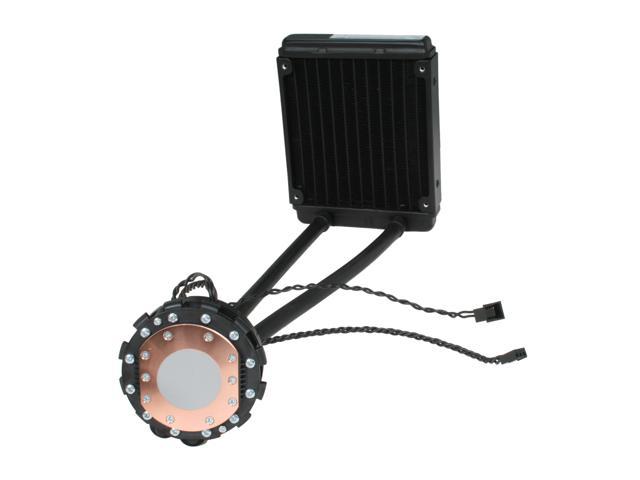 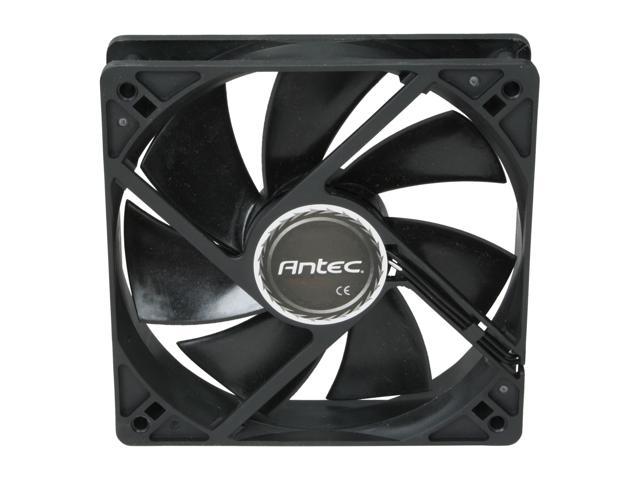 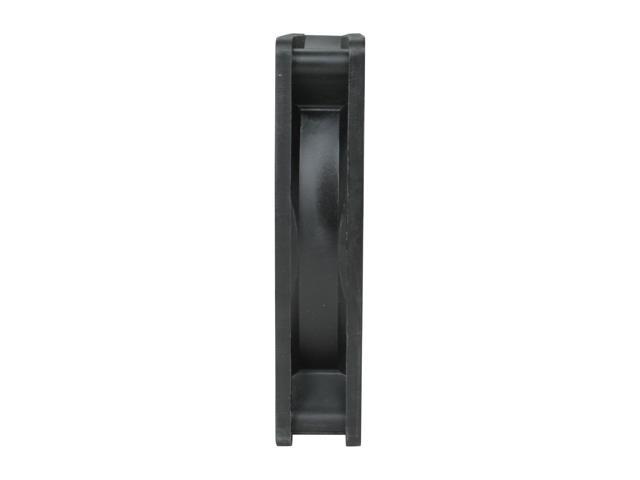 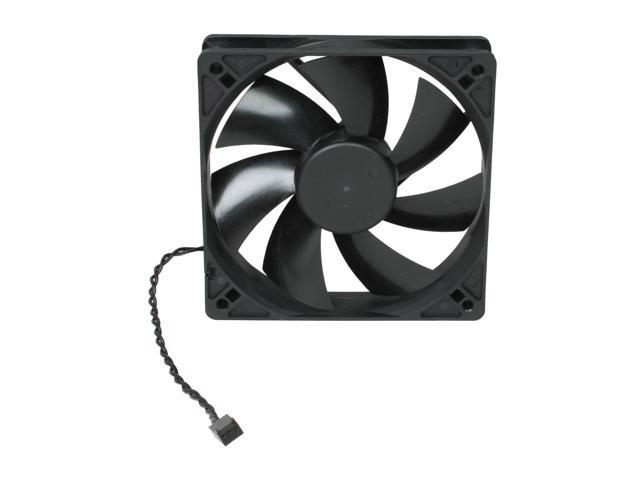 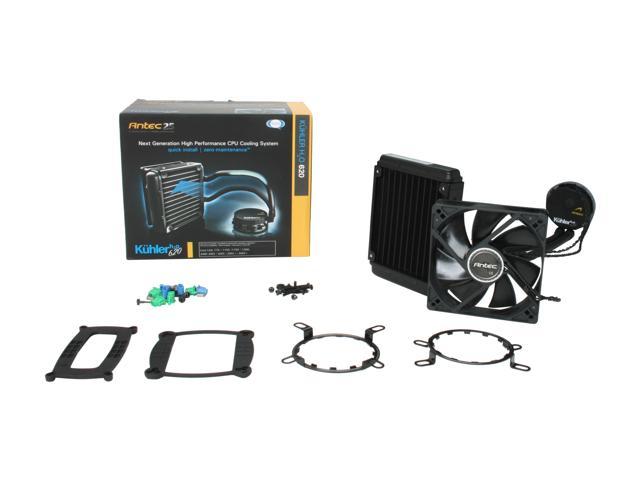 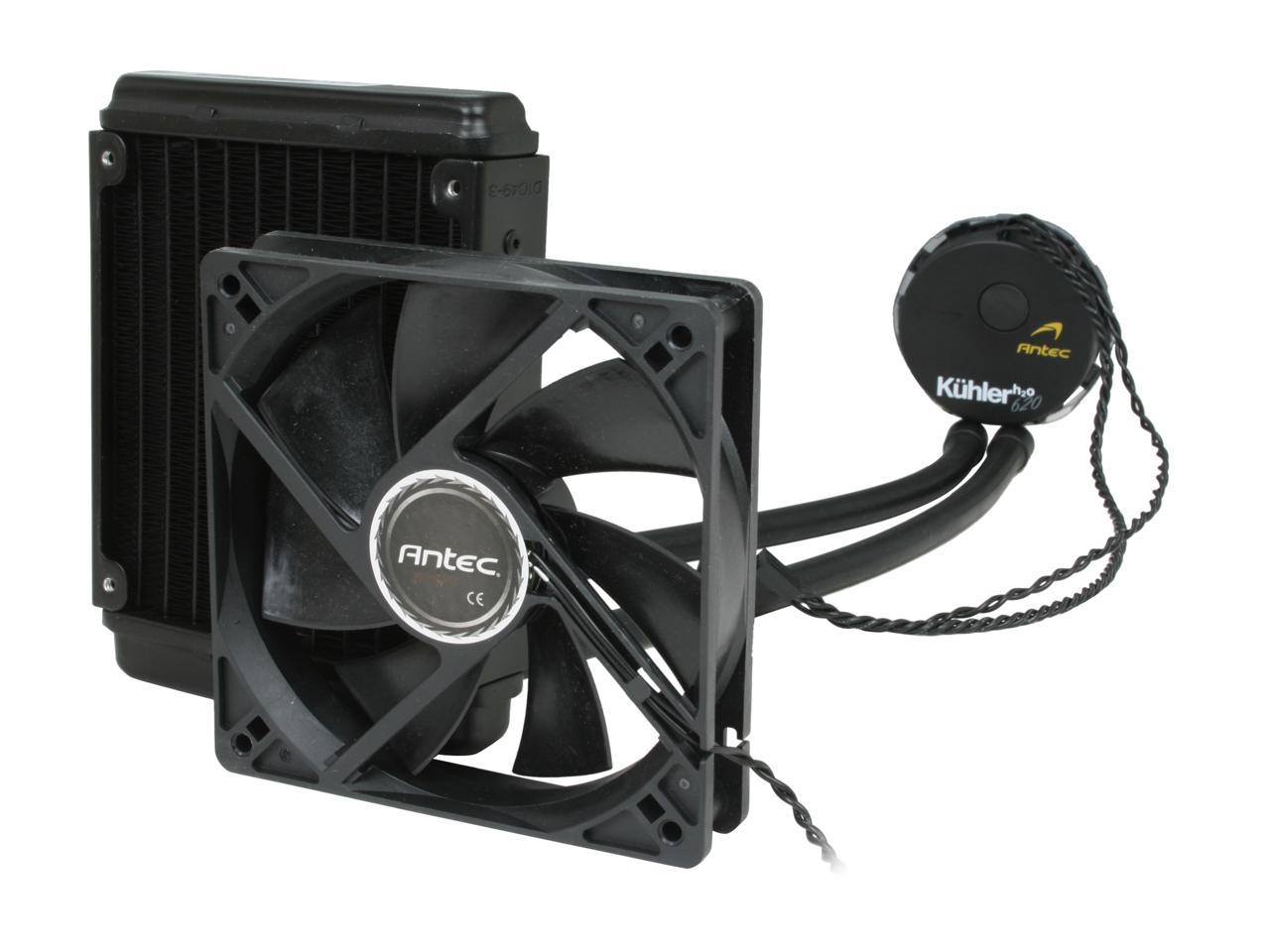 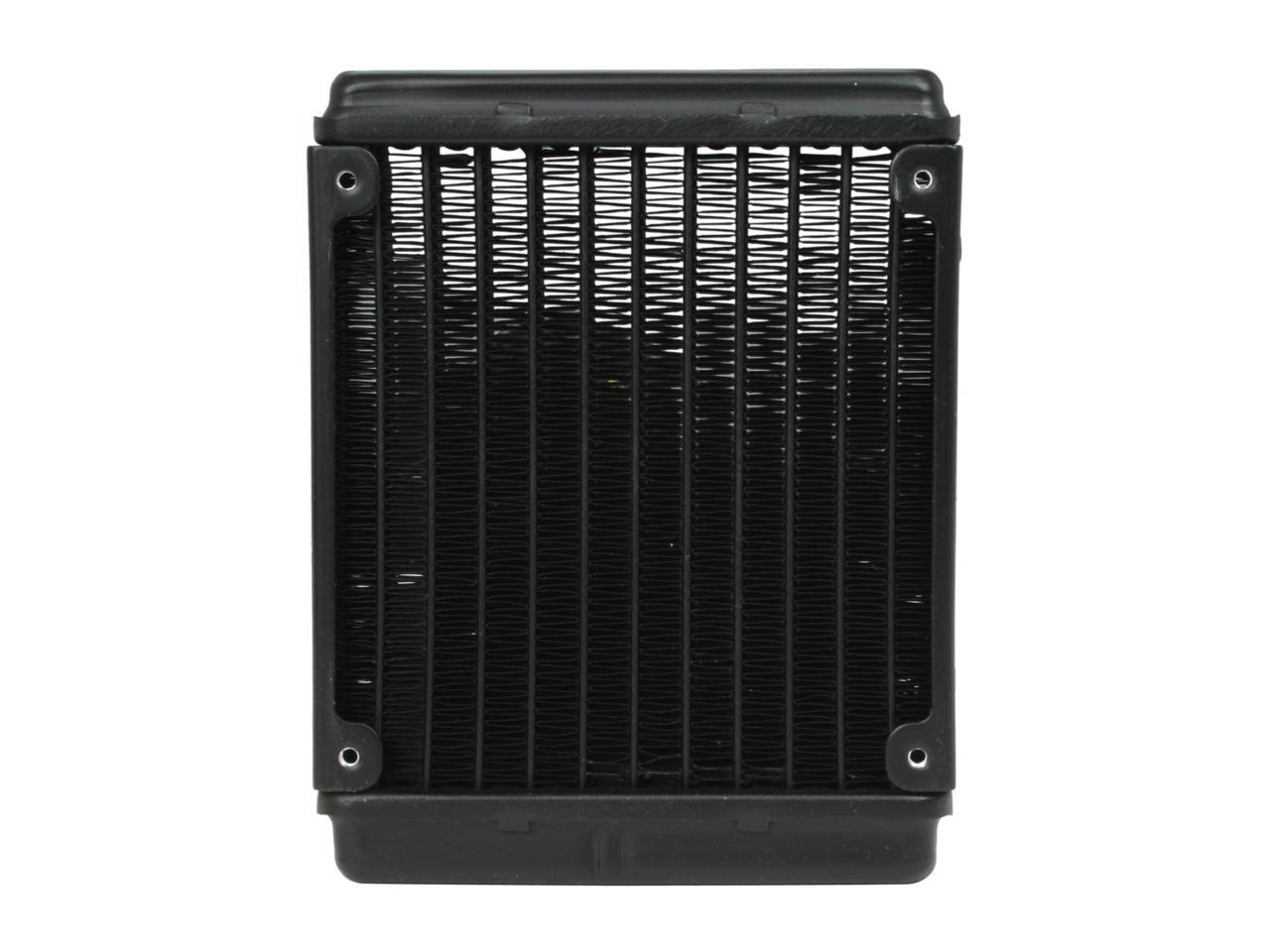 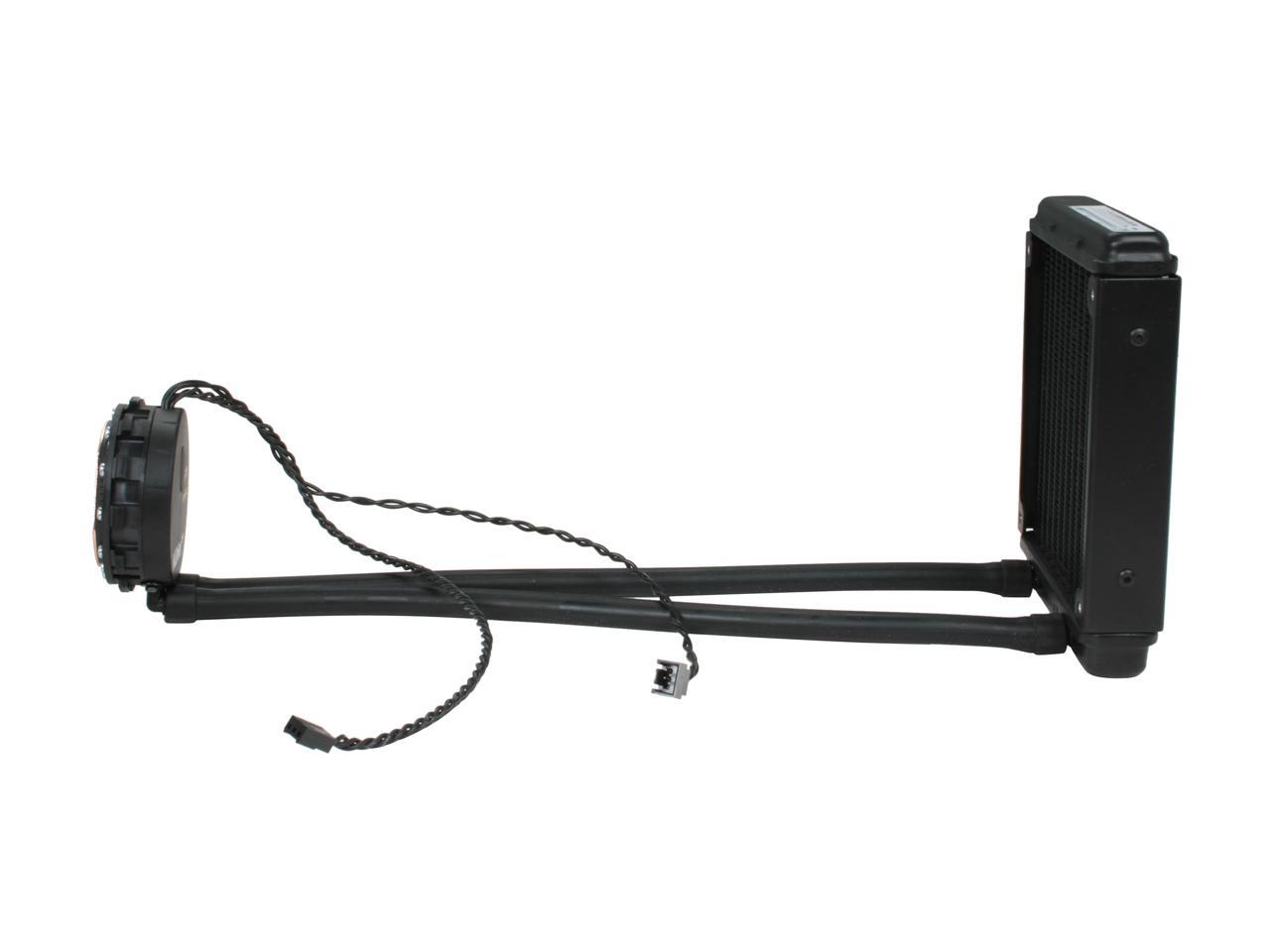 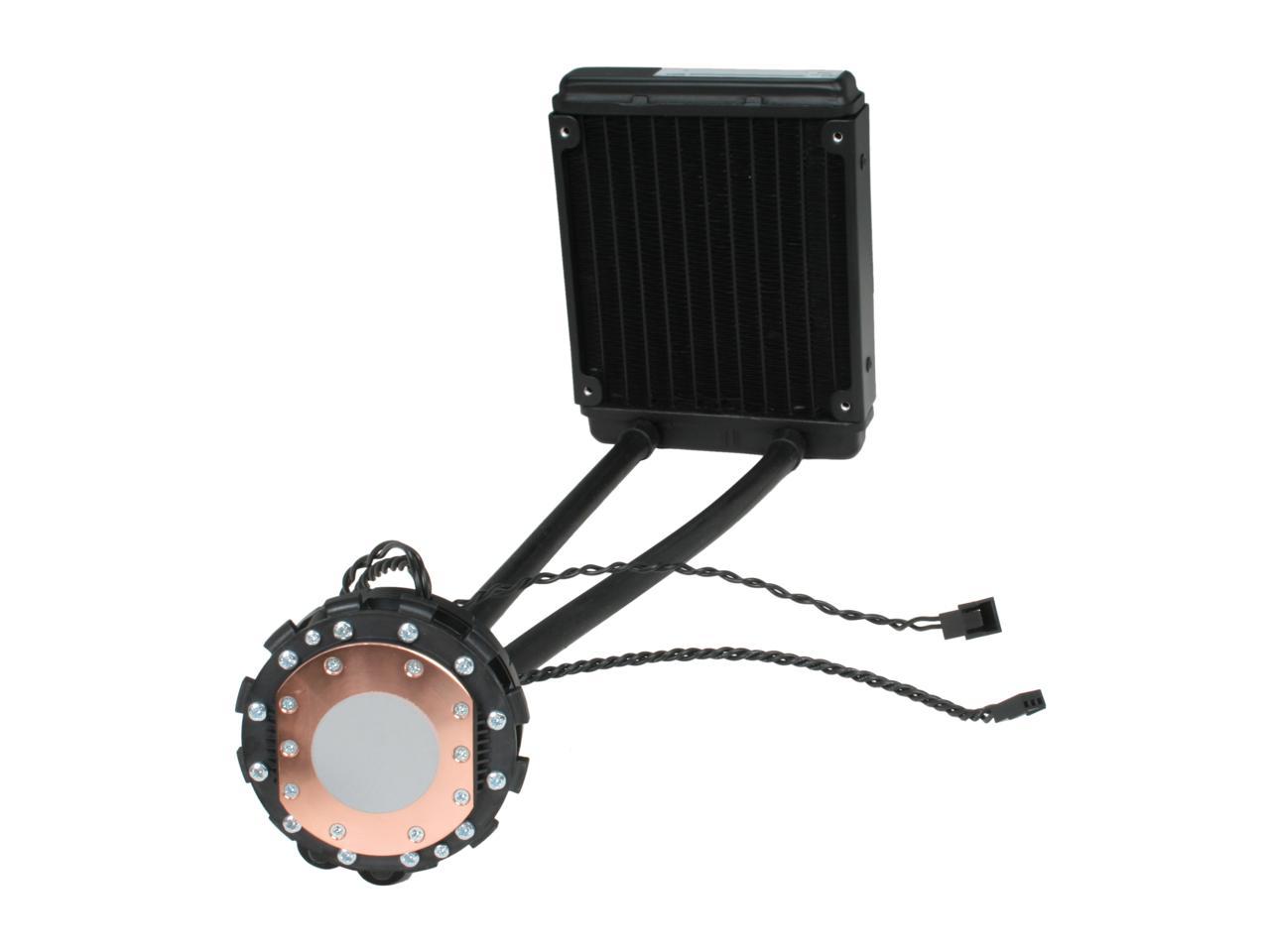 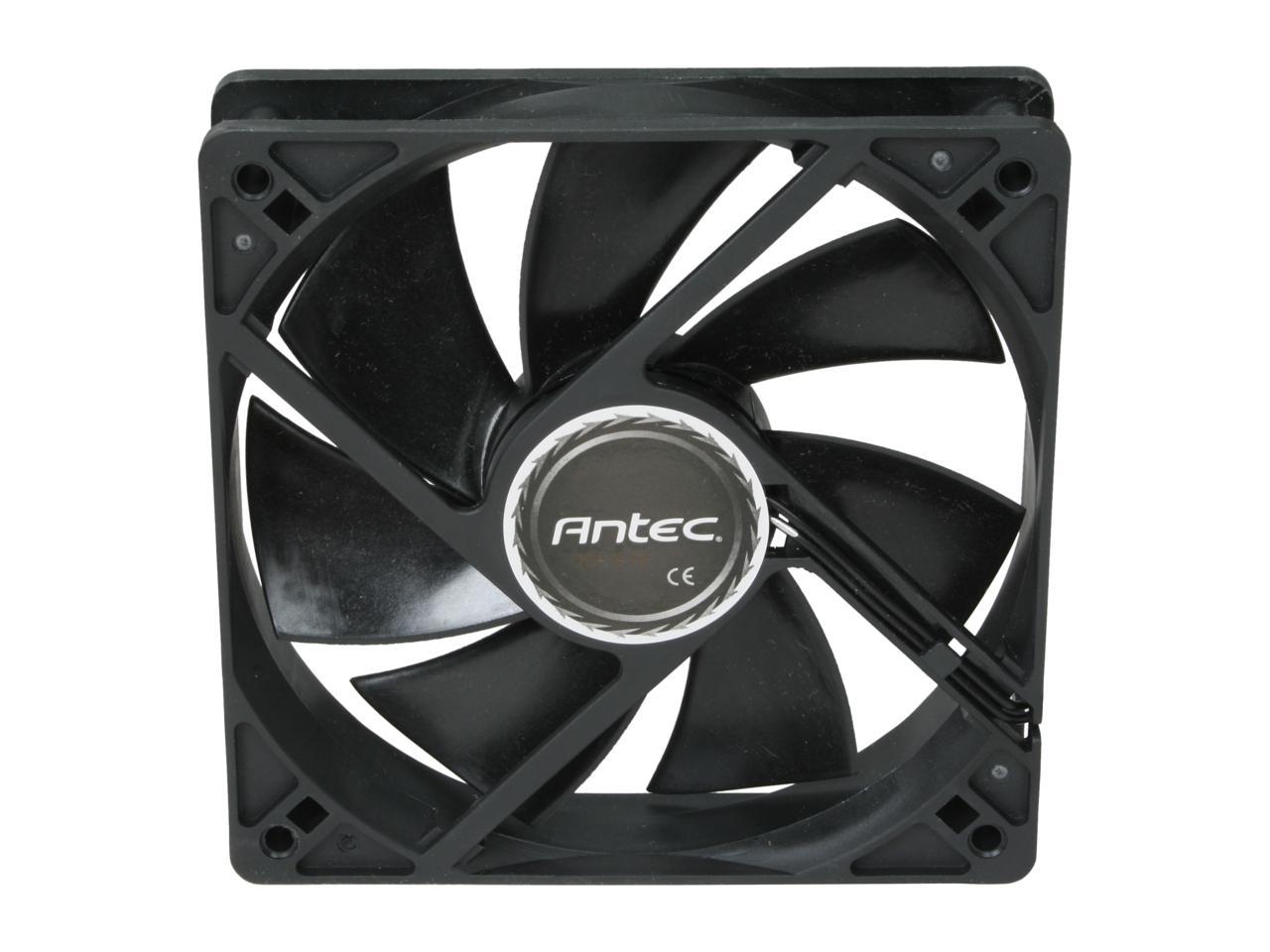 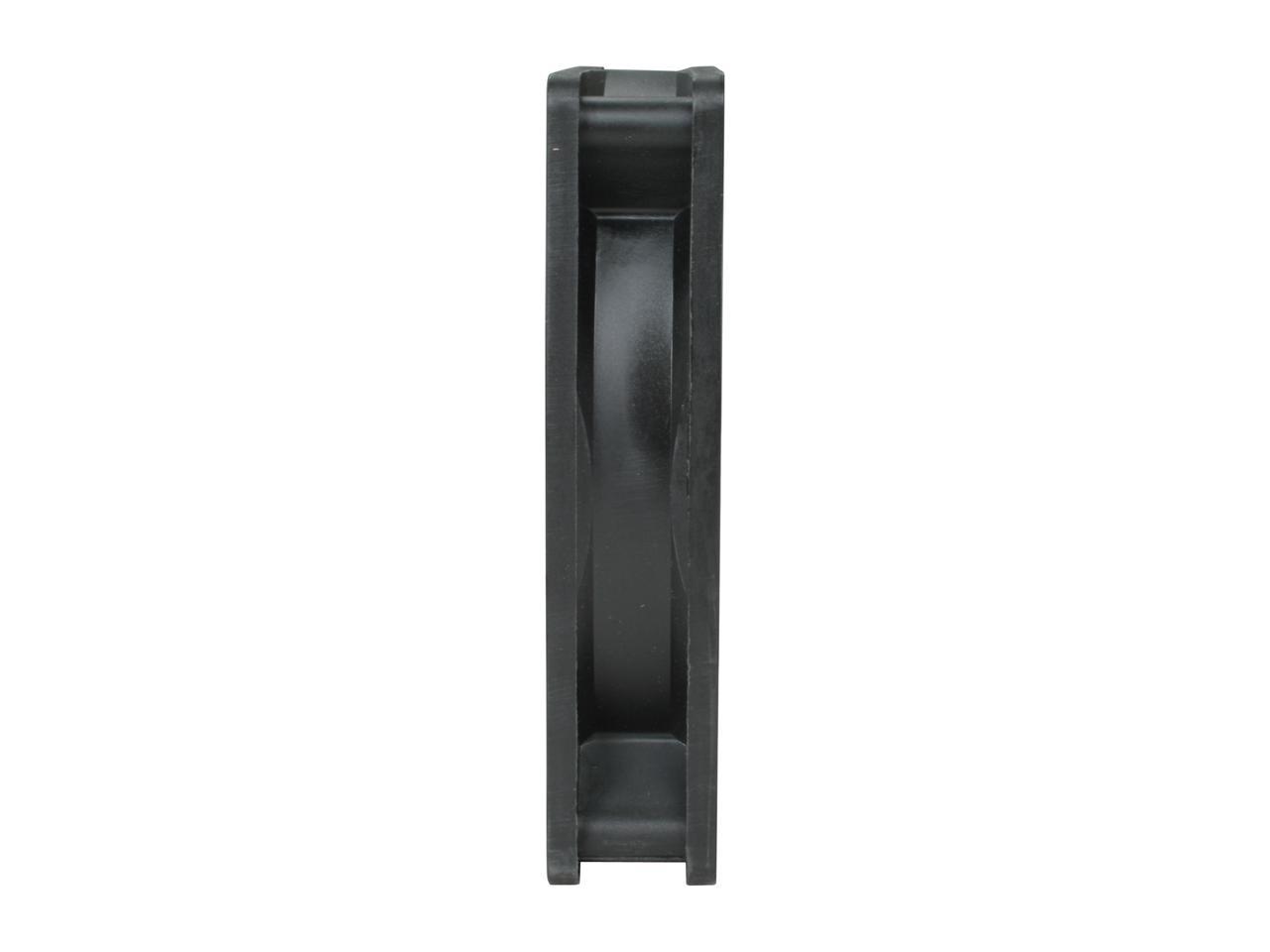 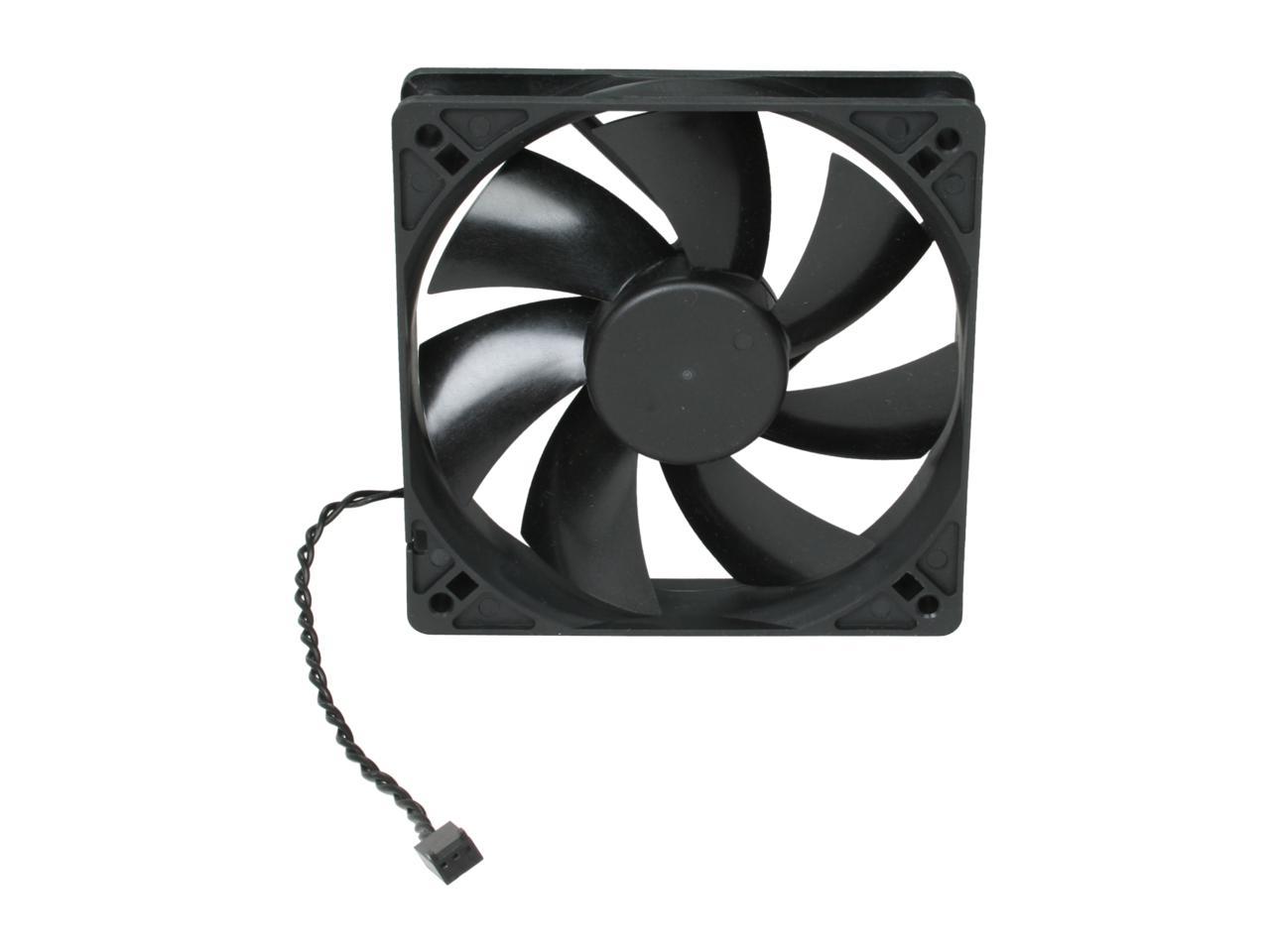 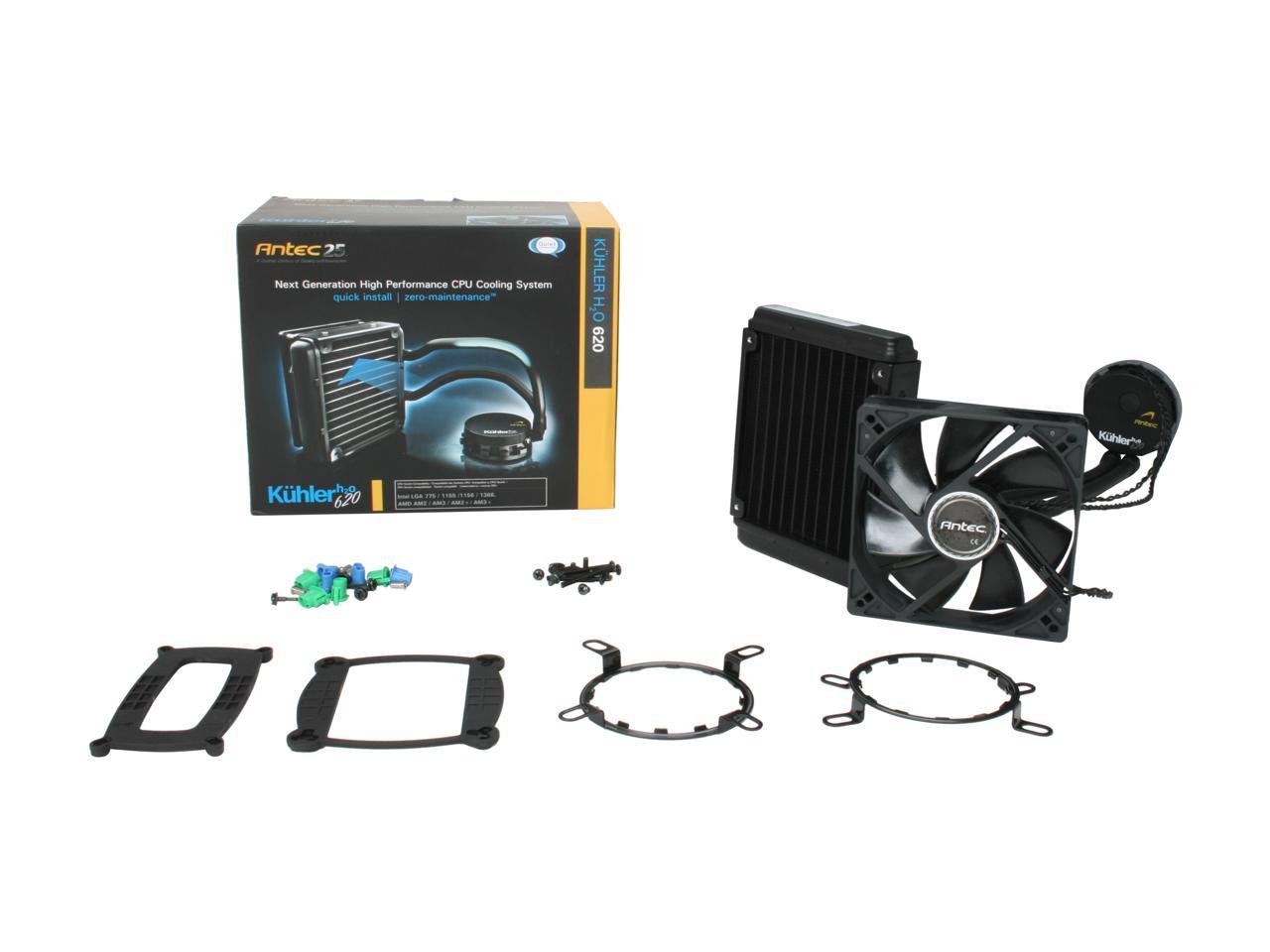 (501) Write a Review
OUT OF STOCK.
Overview
Specs
Reviews

The Antec KÜHLER H2O 620 delivers high-performance liquid cooling for your CPU in a quick, easy-to-install package. Unlike traditional liquid cooling systems, this self-contained unit comes pre-filled and requires no maintenance. The voltage-controlled 120mm fan and 3rd generation copper coldplate ensure efficient cooling, while the estimated 50,000 hour pump lifetime means this cooler is even likely to outlast the system it cools. Lastly, easy-bend flexible tubing allows the KÜHLER H2O 620 to be installed in nearly any orientation. Take your PC's Quiet Computing to the next level with liquid cooling performance at a price that rivals aftermarket air coolers.

Cons: The bump on the top and bottom of the radiator made it impossible to attach to the interrior of my case. Make sure you check beforehand that you have clearance around the 120mm fan location. I can hear the pump over the fans. Almost sounds like a hard drive clicking. It only does this when the system is under heavy load. Feels like I need 3 hands to get the mounting system to work right (am3 socket). The hoses cause resistance. Before installing it, if I tilt it I can hear water traveling through the tubes. If I can hear the water, then that means there is air in there also. Is this normal in a closed system? I would think more water = more cooling

Overall Review: I removed the motherboard backplate and shoved the tubes through this and mounted the radiator on the outside of the case. Very effective in this setup. Three different sets of screws are provided depending on which configuration you are using. Because of my wierd setup I actually went to the local hardware store and got 3" long bolts that work just fine.

Pros: It saves space in the case and provides better case cooling. Keeps the board from having a huge cinderblock of a heatsink hanging from your board and puts the weight on the case.

Overall Review: I got this so i could close my case door, the corsair a70 got in the way of my 180mm fan on the side window which made it unable to close. It serves it's purpose in that respect and based on reviews it seemed to be very close in performance to the a70, but it's not quite as good as the review showed. I'll be lapping the cpu and water block when my sand paper arrives in the mail (walmart didn't have what i needed)

Pros: * Just about the best cooling-to-noise ration on the market, outside of more elaborate water cooling. * With arctic silver 5, I'm running a core i7-960 (3.2 quad) at 39c idle, hitting a high of 51c under load. I don't overclock, though it's nice that I could.

Cons: * Absolutely awful instructions. Not just incomplete, but misleading/incorrect if you follow them. * The back-plate is plastic, and the little metal pegs that go through it are supposed to be held in place by it... which is a problem if the screws going into said pegs meet some resistance, thus tearing the back-plate so that the pegs just spin in place. My tip: put the screws all the way through the pegs prior to sticking them in the back-plate, just to make sure there aren't any snags. * Also, the instructions make it seem like you should put the screws in all the way, allowing the heatsink to twist into place... not so. Don't put the screws all the way in until after you have the heatsink applied (and aligned properly for the ring to hold it down).

Pros: Looks khul inside the case :) Compared to the stock Intel cooler that came with my 2600K it keeps the CPU about 50% cooler. Clever multi-socket mount design. Easy to install, easier than those giant copper aircoolers. Although, it does require access to the back of the mobo, so if you don't have a cutout in the tray you will need to take the mobo out. All black, including cables and plugs. Tasteful logo on the block, no crazy graphics. Doesn't obstruct the RAM slots, the 8-pin power socket and the fan headers like the large heatsinks. Great cooling without the bulk and weight of a large heatsink. It keeps my 2600K idle at around 25-30C (my room gets warm sometimes). With the stock Intel cooler it was around 50C. The CPU is overclocked and hits 4.1GHz during stress test and never goes over 70C and this an extreme usage scenario. Nothing keeps all cores maxed out for that long except maybe 7-zip compressing huge files :) 100% stable system at those speeds.

Cons: The radiator obstructs the topmost expansion slot. Lucky for me, on my mobo it's a standard PCIe slot, not x16 slot. If you only have one x16 slot and it's on the top, it might not work. It may also partially obstruct headers that are close to the left edge of the mobo (Azalia). Not a con for me, but if you want a really quiet PC this might not work. The pump is audible. Depending on the kind of case you have and how far you sit from it, and how sensitive you are to noise, you might hear it. I don't hear it since my PCs are located behind the side of my desk and far enough so I don't hear anything but the loudest noises. Again, not really a con, it's expected: it's an entry level liquid cooling system, don't expect the same kind of cooling you'd get from systems costing a few hundred bucks. This probably works just as well as a high-end, large copper heatsink but without the bulk and weight. I had to add vertical support to my last copper heatsink, its weight was pulling the mobo

Overall Review: I've built dozens of PCs and repaired hundreds PCs and Macs over the years but this my first liquid cooling system (other than replacing some leaking ones in late PowerMacs G5). I never felt the need for liquid cooling and extreme overclocking and I was always turned off by the complexity of those systems and the possibility of leaks and critical failure. But it looks like the compact, all-in-one systems become mature. After having to deal with massive and heavy copper heatsink, that covered 1/3 of the mobo and was pulling it because of its weight, in my last Nehalem build, this caught my eye with its simplicity and good reviews. Previous compact, integrated systems had mixed reviews. So my initial impressions are very positive. So far so good:) I may be hooked on liquid cooling:) I hope this will last for a couple of years, too early to tell how reliable it is. Time will tell. I generally had good luck with any Antec products I owned so I hope that will continue!

Pros: High quality feel, relatively quiet, i5-2500k currently running at 31c (no load), air blowing out the radiator is not too warm.

Cons: The instructions that come with this product are absolutely TERRIBLE. I would have had better luck trying to figure it out myself than using the directions. Some gurgling noises when it turns on, but that goes away pretty quick once it gets going.

Overall Review: The "turn to lock into place in the bracket" step is completely impossible. (it doesn't turn) Put the bracket on the cooler, then install both at once. Antec needs to hire someone from IKEA to assist in this step-by-step manual ...

Cons: As many people have stated. The instruction sheet was very vague and was not clear on orientation of parts and exactly which parts to use. I apparently got an older version of the instructions. Either way, the Youtube video explains installation very well.

Overall Review: Interested to see how it would do cooling my Geforce 670, however, I don't like taking graphic cards apart even for better performance. I like to see it's case intact.

Pros: Very quiet and does some serious cooling on my Ivy i5, always ten degrees cooler than the stock fan regardless of load. I game hard and have never had high temps, so the reviews that said it didn't cool properly either didn't install it correctly or they have a defective one. As for Nick's review a few back saying it doesn't work on 1155 socket he is just plain wrong! I have installed this cooler on two different builds. Both with 1155 sockets. The 1155 and 1156 are exactly the same! I do have to say that the instructions do not tell you this little factoid, so for the lower level techy this is surely going to be an issue!

Cons: Egg loss! Two reasons for this, first is that the instructions that came with the first two coolers I purchased...how can I say this subtly, SUCKED! Better off throwing it in the trash and winging it! Second reason is on my second build I got a defective cooler. It sounded like the pump was having a seizure or something? So I had to fork out $10 bones to get it swapped. Only happy with Newegg's quick replacement, they are the best!

Overall Review: I don't know if they just released a new version of this cooler but when I got my replacement for the defective one it came with a whole new mounting system that is much more user friendly and seems to be more secure than the original. Unfortunately it still doesn't mention that it works on 1155 socket but I assure you it does. The instruction in the new version are better but not by much unfortunately :(

Manufacturer Response:
Hi Major Payne, Thanks for pointing out that this cooler does indeed work with the 1155 socket. Sorry for your receiving a defective unit but I'm happy to hear your RMA went well. The instructions are truly a "major payne" and you don't have to be subtle about it - we'll do a better job next time. Online videos or calling our customer service team are the way to go if anybody needs help with installation. Chris Antec Customer Support
SweetPC's
Ownership: 1 week to 1 month
Verified Owner
Awesome CPU kuhler6/12/2012 12:21:26 AM

Cons: new clicking sound coming from case after install. After reading on some forums, found that there can be air bubbles trapped inside the radiator and pump. Easy fix, read other thoughts.

Overall Review: Impressive cooling. Stuck this on a FX 4100 overclocked to 4.0GHz. Idles between 29-31 degrees Celcius. Annoying New sound was fixed by lightly shaking the pump and radiator to get the trapped air out. Had it for over a month and noise is gone. Easy install if you follow the directions. Worth the money, I was tired of having to have a huge heatsink and fan for descent cooling.