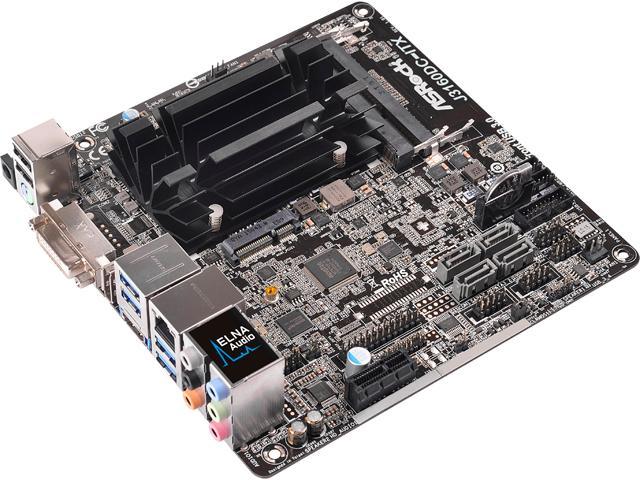 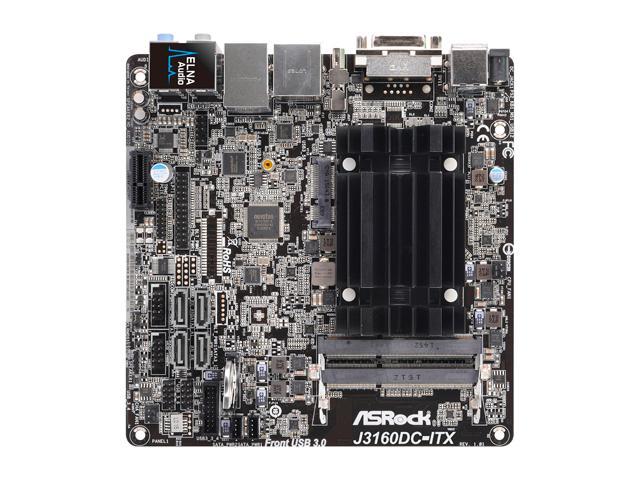 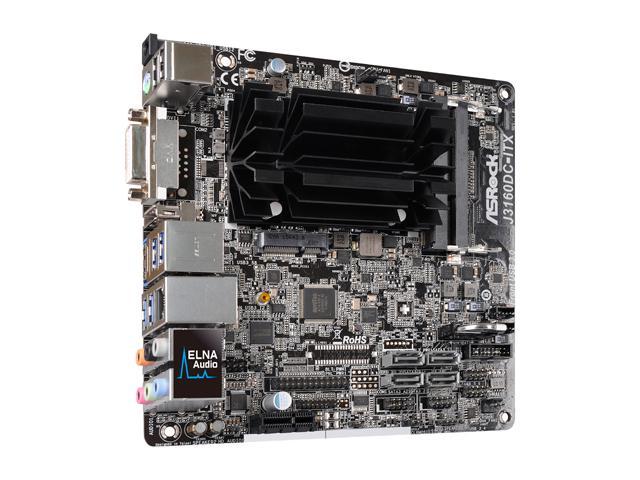 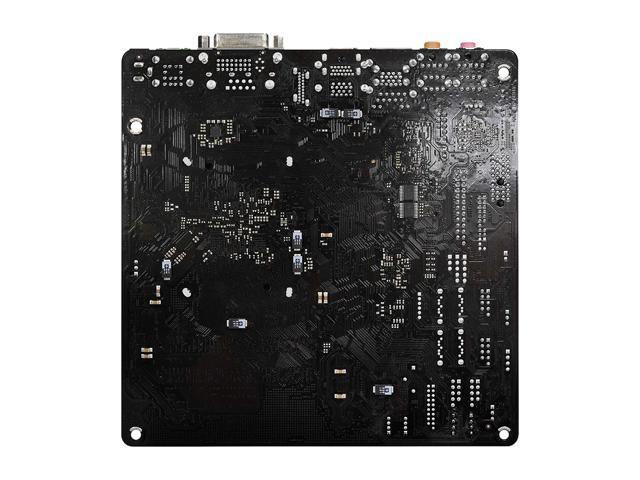 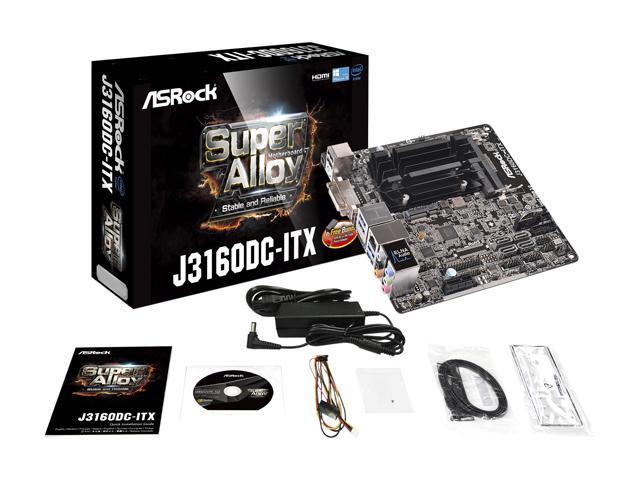 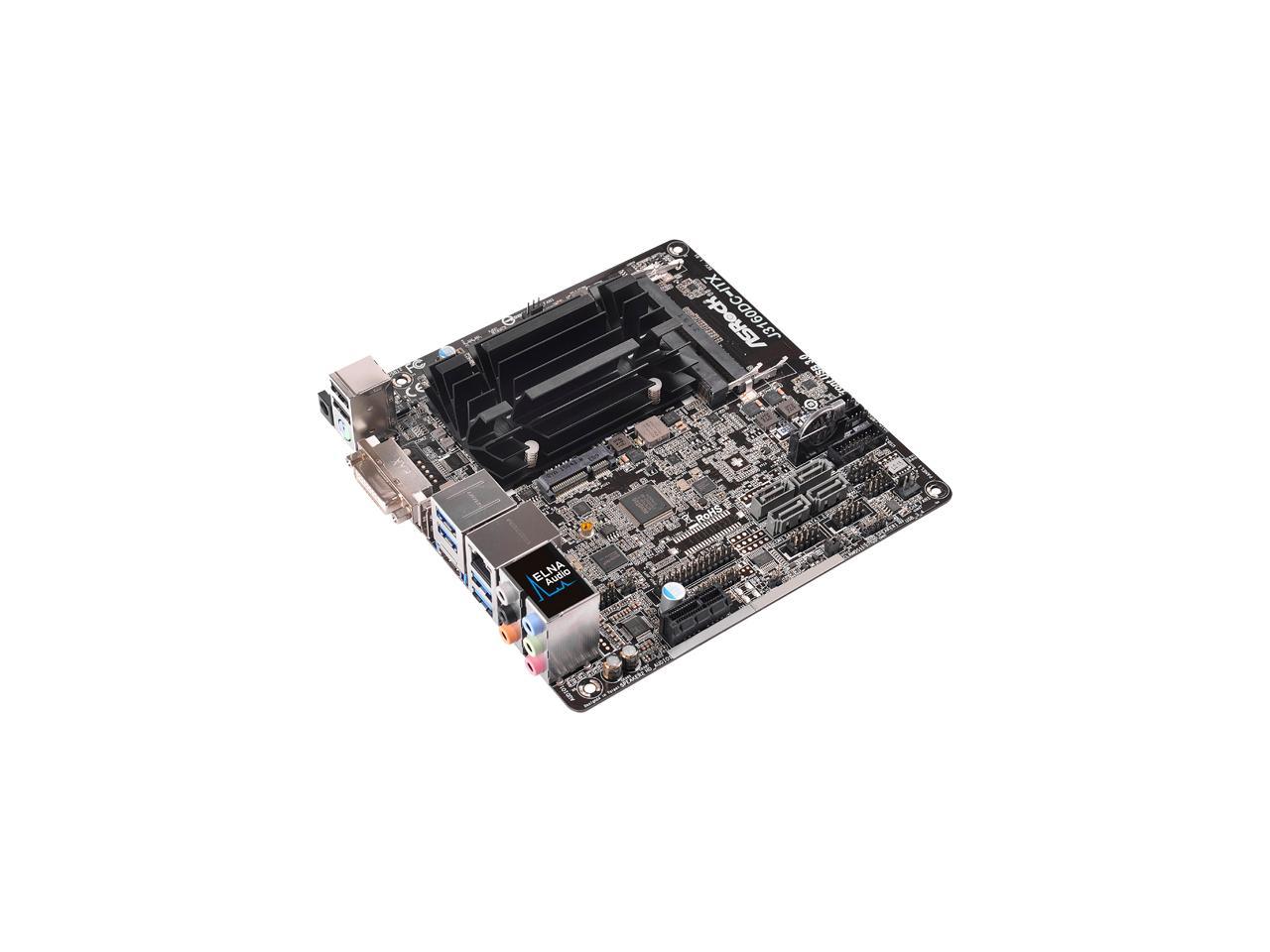 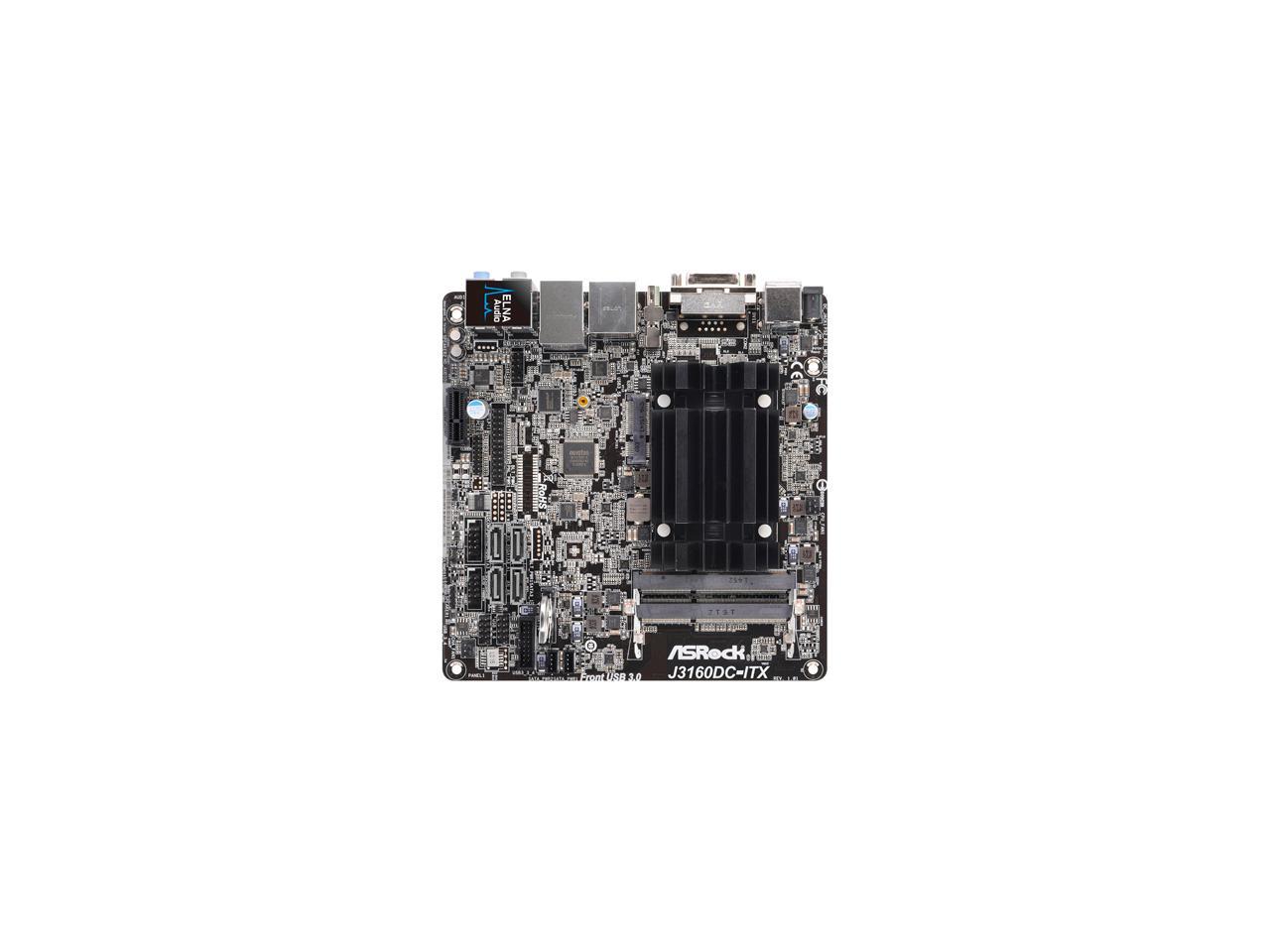 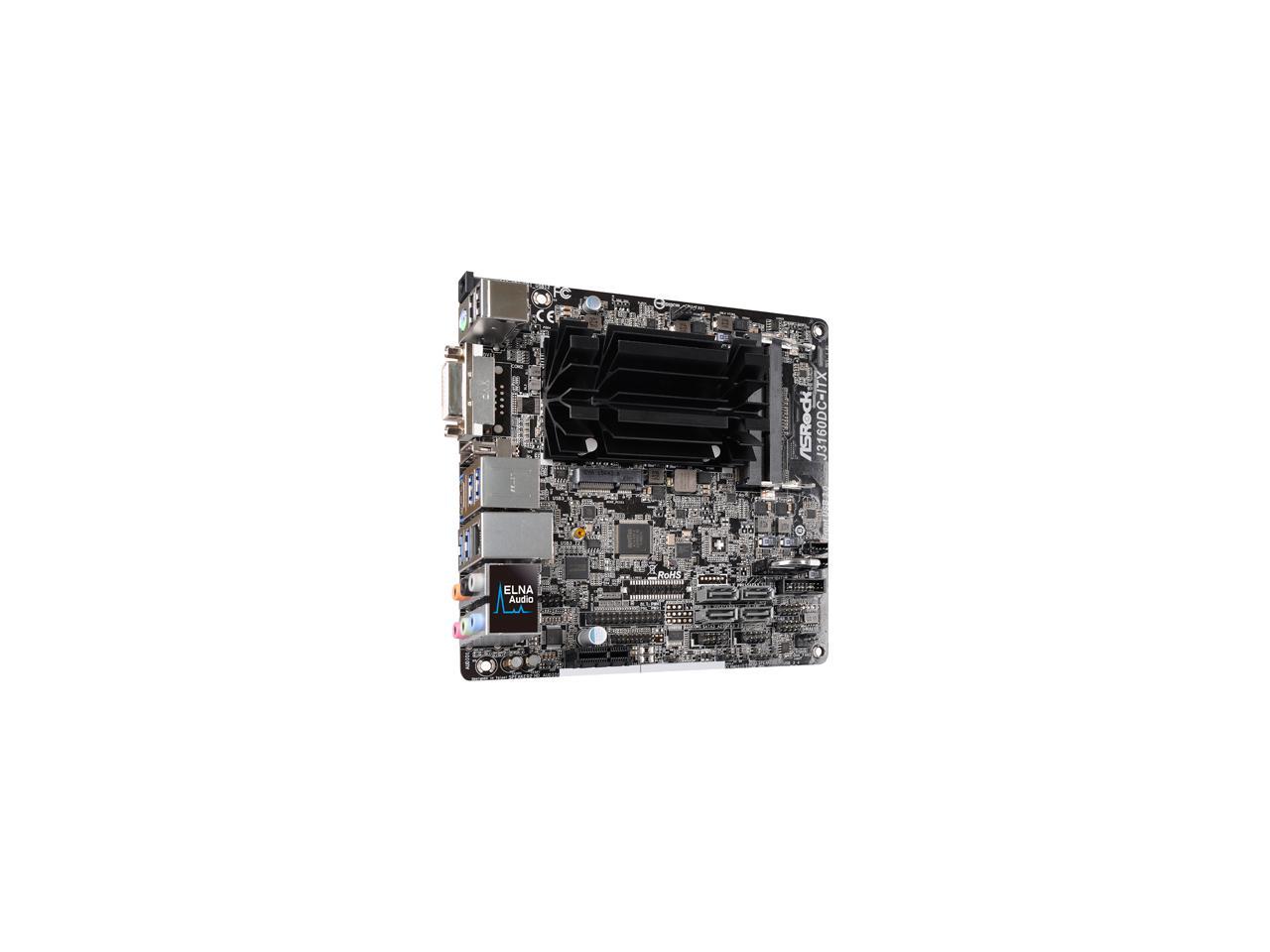 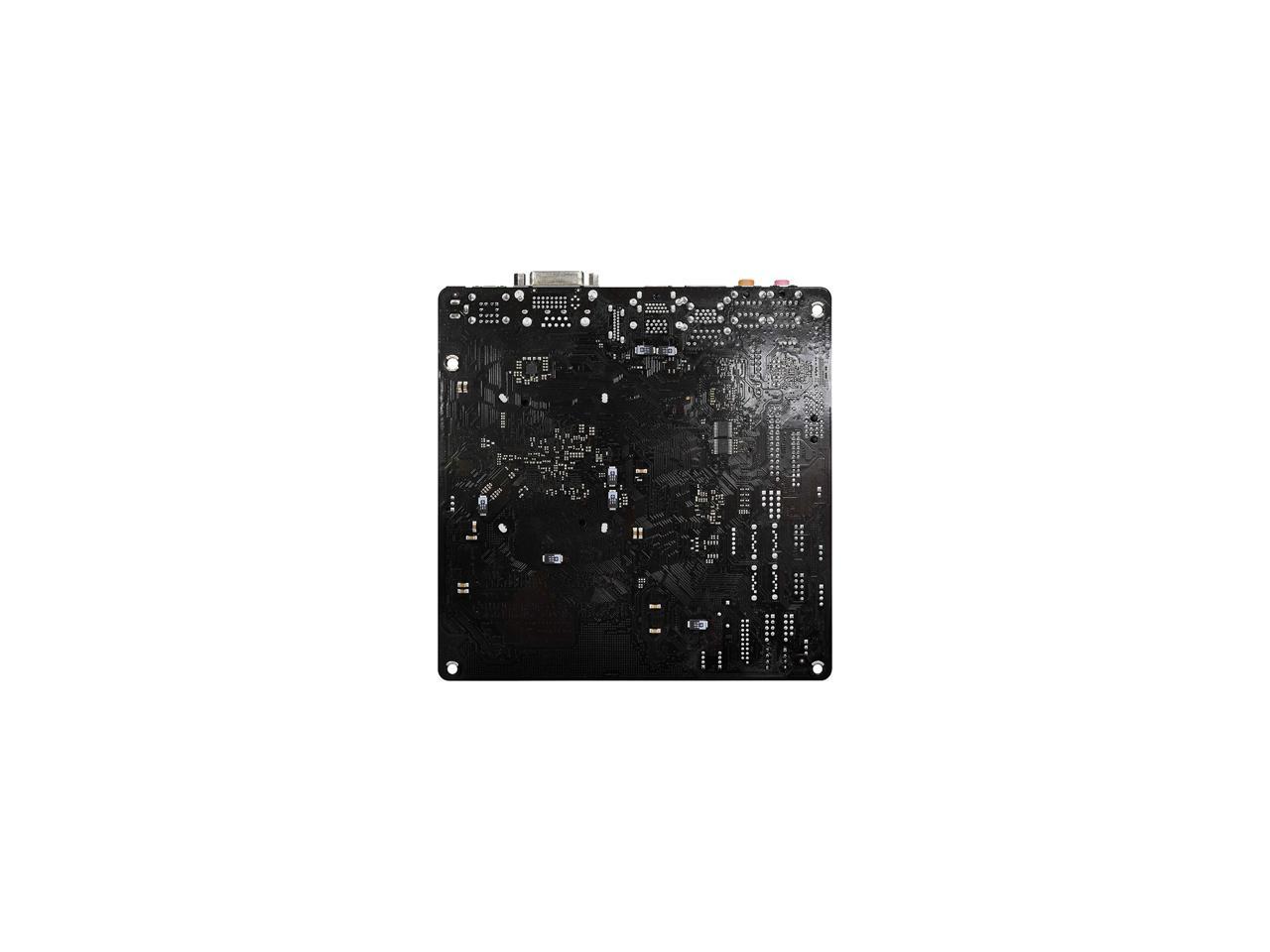 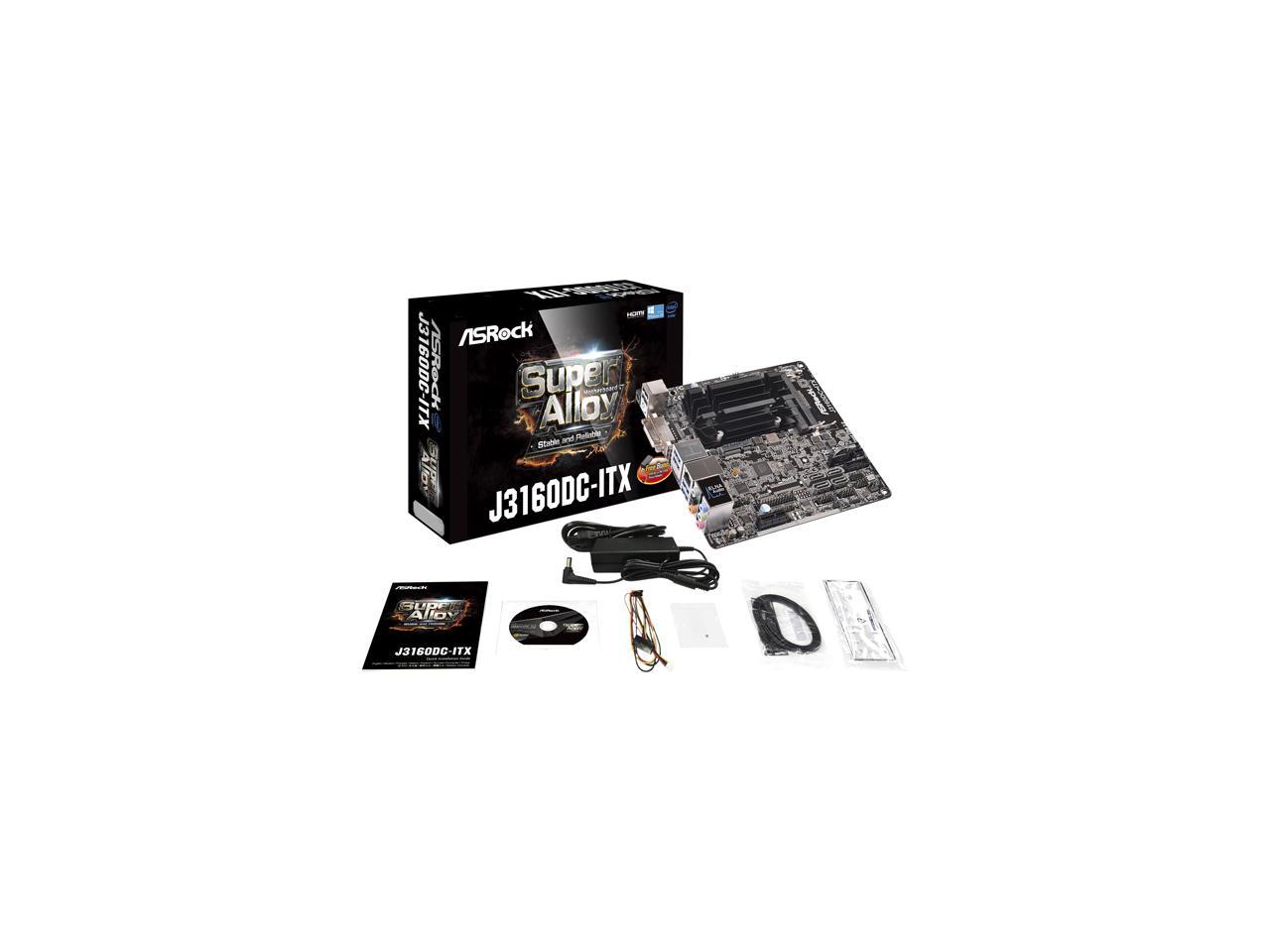 Learn more about the ASRock J3160DC-ITX

Pros: - QUIET! - Very low power consumption with only 1 SSD and onboard video. About 12 to 15 watts maximum per my Kill-O-Watt meter. - CPU heatsink is not glued to the CPU so you could change it out if you wanted. - CPU heatsink stayed "cool to the touch" in my testing, but you will still want good airflow around the board. - 2 onboard 3-pin fan headers with some BIOS settings for them. I did not test this. - 2 onboard USB2 pin connectors. I tested both and had no issues. - I tested a PS/2 mouse & USB keyboard under Debian Linux (4.8.x kernel, "testing" release) with this board and had no issues. BIOS is the very friendly "GUI style" interface that is easily navigated using just a keyboard. The usual minimal settings for a basic "no overclock" BIOS can be found and adjusted. I tested the built-in BIOS update (auto-connect to the Internet using DHCP and without need for an OS) feature, but no BIOS updates were found. Look carefully in the box for a very small (about 1 inch by 1 inch) plastic bag with a very small (maybe 2mm long) screw inside it. That is the screw to secure a half-length mini-PCIe card to the slot on the board. Getting the screw to "seat" in the "captive nut" on the board required some "force", probably due to the thread-lock compound on the screw, but it does fit properly. The manual has a very good warning at the very back of the booklet regarding the installation of Windows 7 on this board. I did not test the provided process, but it seemed well written and well worth the time to read if you are installing that OS. I would expect anyone trying to load Windows XP on this board will have many more problems and might not even be successful. Web browsing seemed acceptable to me. I did not encounter any "unknown" onboard devices while using Debian Linux "testing" version (4.8.x kernel).

Cons: My copy of the provided manual is faintly printed so people with poor eyesight may have problems if "faint printing" is the desired product. The manual is little more than a "quick reference" to the connectors; do not expect any explanation of any BIOS settings. On a positive note, the manual is printed in something like 10 different languages. The manual clearly states, "Due to the power limitation and PCIe bandwidth (x1) VGA cards are not supported." yet, the BIOS defaults the video display to the PCIe connector. ASRock should correct that BIOS option to it's "onboard" choice. Fortunately the board did "auto-sense" a monitor connected to any of the "onboard video" connectors. In my case I tested HDMI and HDMI via DisplayPort adaptor. In both test cases the monitor (large LCT TV @ 1920x1080 resolution) was "auto-sensed" and I could see the output and access the system. Due to BIOS and manual "strangeness" related to VGA support I will deduct 1 egg. Motherboard does not have any onboard power connectors like ATX or 4-pin CPU power. The pictures clearly show that so plan your build properly.

Overall Review: I used 1 stick of this memory: N82E16820239696. I have a second stick on order now. When using 1 stick of memory use the correct memory slot on the board and firmly set the chip; the socket will feel "snug to the touch". I used 1 SSD drive. The board has 4 onboard SATA3 connectors. The SATA3-1 and SATA3-2 connectors are from the SoC. The SATA3-A1 and SATA3-A2 connectors are from the ASMedia SATA chip (as far as I can tell). I was able to boot from both SATA3-1 and SATA3-A1 connectors. I loaded Debian "testing" (Linux 4.8.x kernel) from a USB "netinstall" key. No issues with install or video. I used the LXDE desktop. I will eventually use this PC to power an "always on" web-based video display for surveillance cameras, so a very simple and "low power" setup was very important to me. Supplied AC adapter (and my adapter is made by Delta Electronics, a reputable power supply company) is rated to 65 watts maximum. The manual includes a short table of various configurations and the required AC adapter needed to power them. The included power connectors for drives are all SATA and use a "custom" (smaller than I have seen previously) 4-pin motherboard connector.

Cons: Really picking here, but some of the board connectors were poorly marked, but with so much packed onto this tiny board, I can understand why.

Overall Review: I have 4 of them stacked in cheap mini-itx cases with 16GB sodimms, and 500GB SSD each. I now have a docker swarm environment for some hadoop and other distributed testing. It performs pretty well, and its super cheap to power. For about a thousand bucks I have 16 cores, 64G, 2TB cluster using minimal power. All purchased from Newegg, and all working quite well together for 2 weeks now. This is way cheaper than any cloud alternative I could have purchased.

5 out of 5 people found this review helpful. Did you?
Anonymous
Ownership: 1 week to 1 month
Verified Owner
Cost-Effective Virtualization Server12/27/2016 7:32:15 AM

Pros: - 16 GB of RAM! It pushes this tiny box for software that is RAM intensive and CPU light, or for virtualization since the little processor has virtualization extensions. - Comes with power supply and the processor is rated for 6W TDP. There isn't a lot in the Intel product line that draws so little, and in this form it is very digestible. - Quiet by default as it is passively cooled, a lot of boards in this category have cheap noisy fans. - TCO way lower than an equivalent VM in the cloud somewhere. - Features on features on features! Read the PDF about this board on the AsRock page, there is a surprising amount of things available. - Great to plug in and leave on forever.

Cons: - It would be nice if the SATA power cables were cable wrapped somehow. It is very easy to isolate one wire and put undo pressure on it. The lack of a cable wrap does allow you to be more flexible though. - Because it comes with it's own power supply and is in the ITX category of systems, you have to deal with the hole generally in most cases for the ATX power supply. Either a piece of card or tin to cover the hole would be recommended, or find a case that doesn't have the power supply bay.

Overall Review: - I had bought the previous model (N3150DC-ITX) to use as a NAS and it has been working wonderfully. - Debian 7/8 install fast and easy. - You can get two of these boards, max out the RAM on both and be in the $400 or so range, which lets you experiment with distributed system setups for a good price for a side project. It is much nicer than having a used 5 year old server from somewhere else that draws 10x the power and delivers 10x the noise.

Overall Review: Wish it would have 2 network interfaces ...