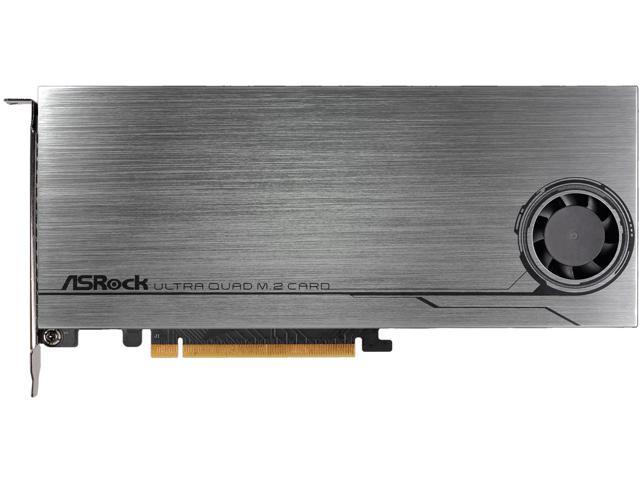 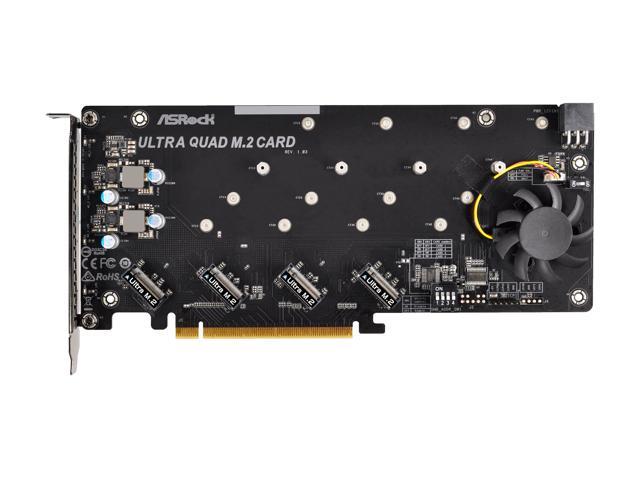 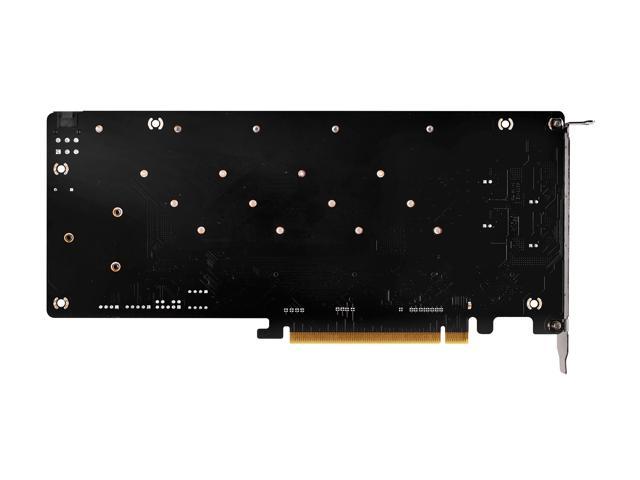 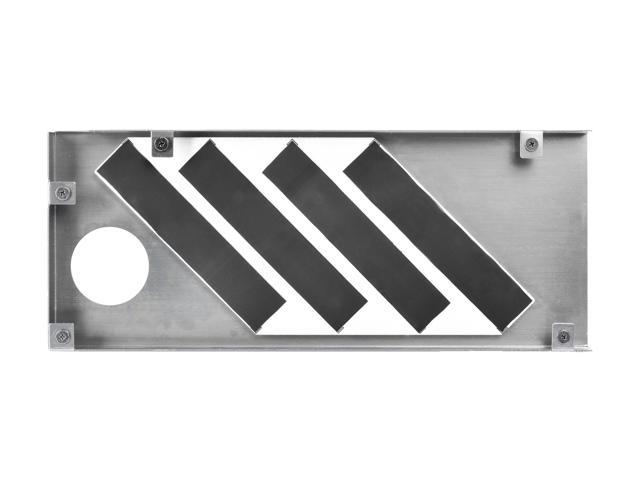 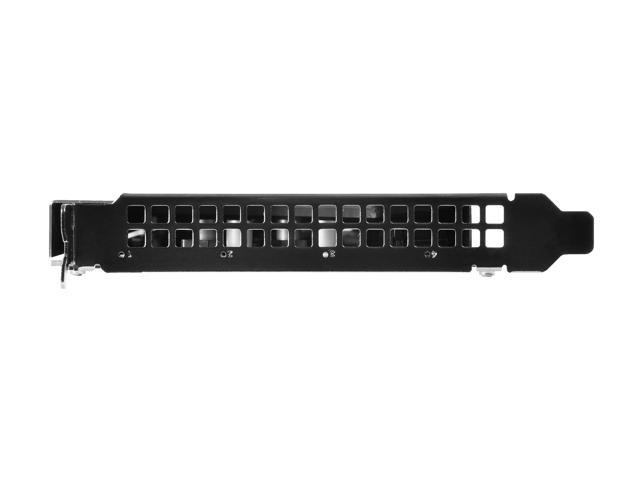 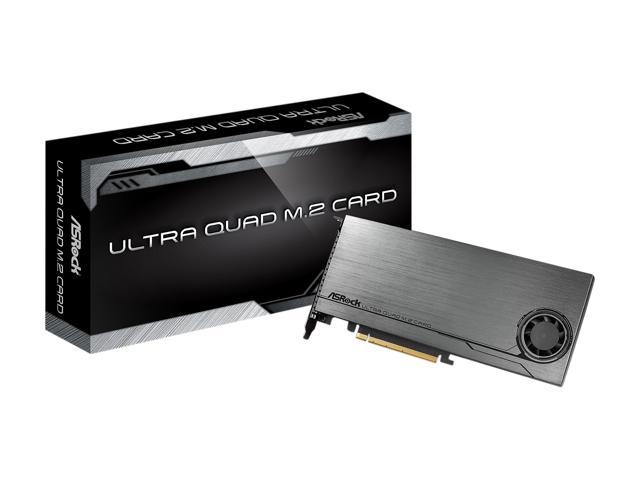 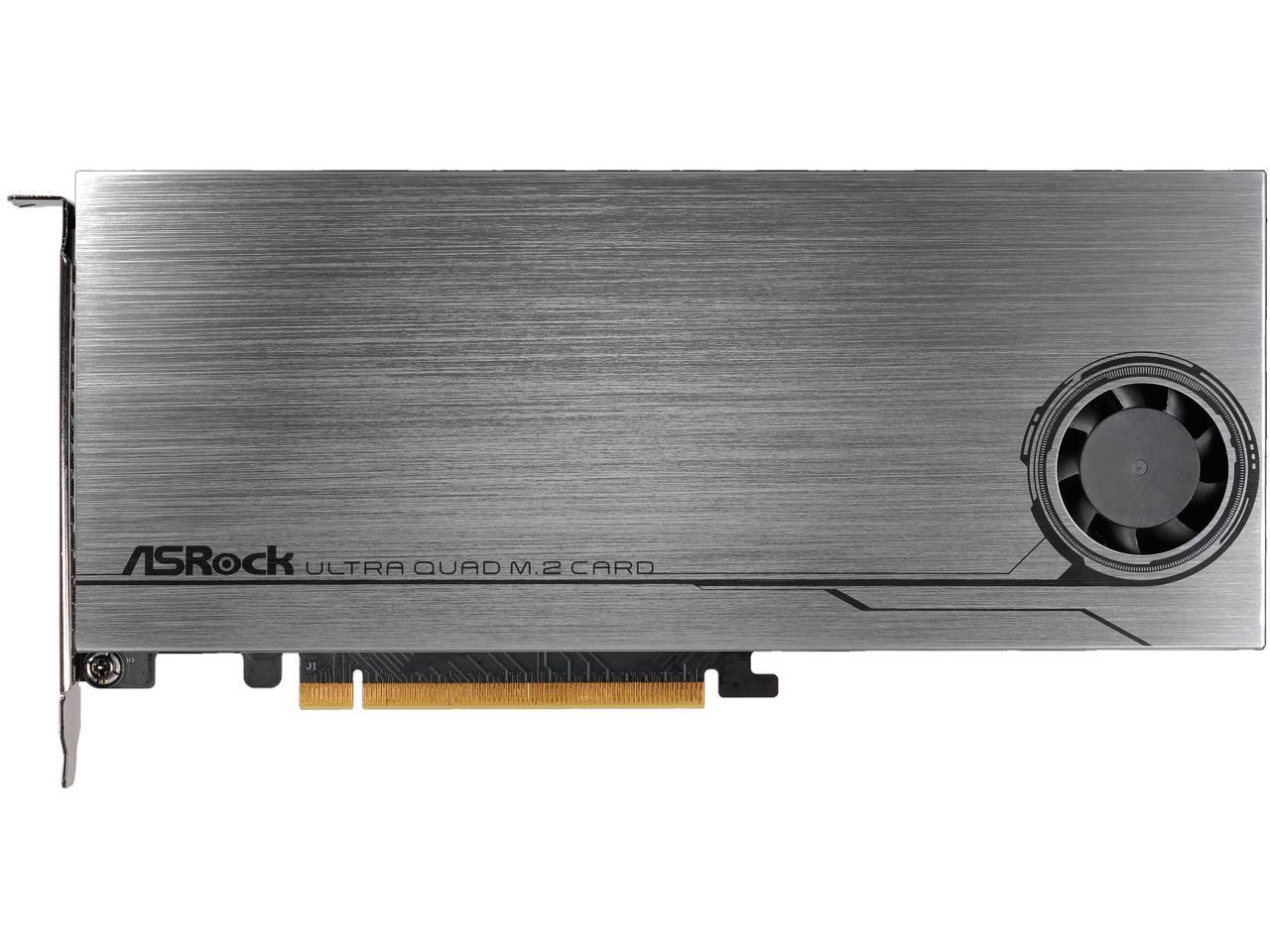 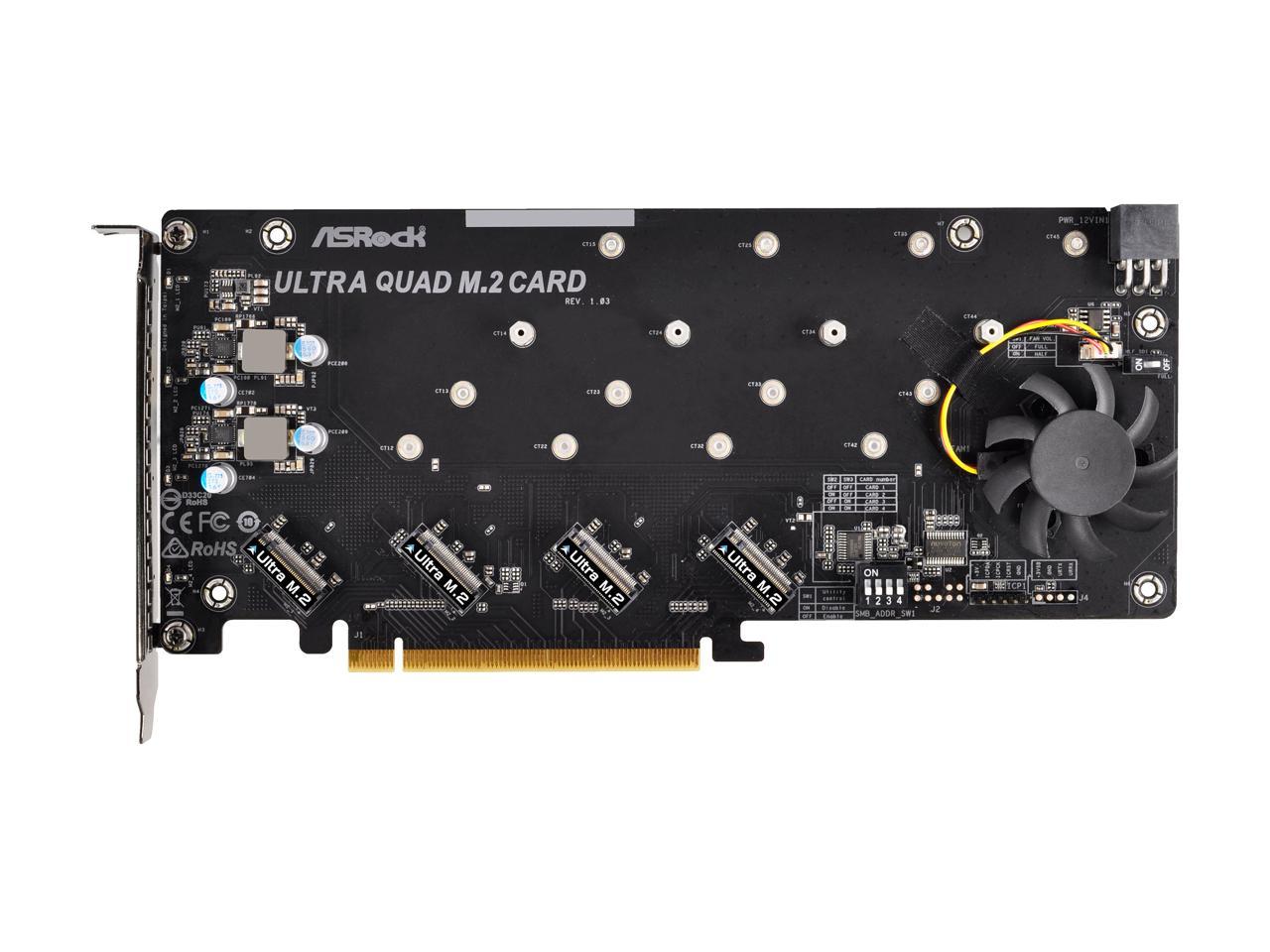 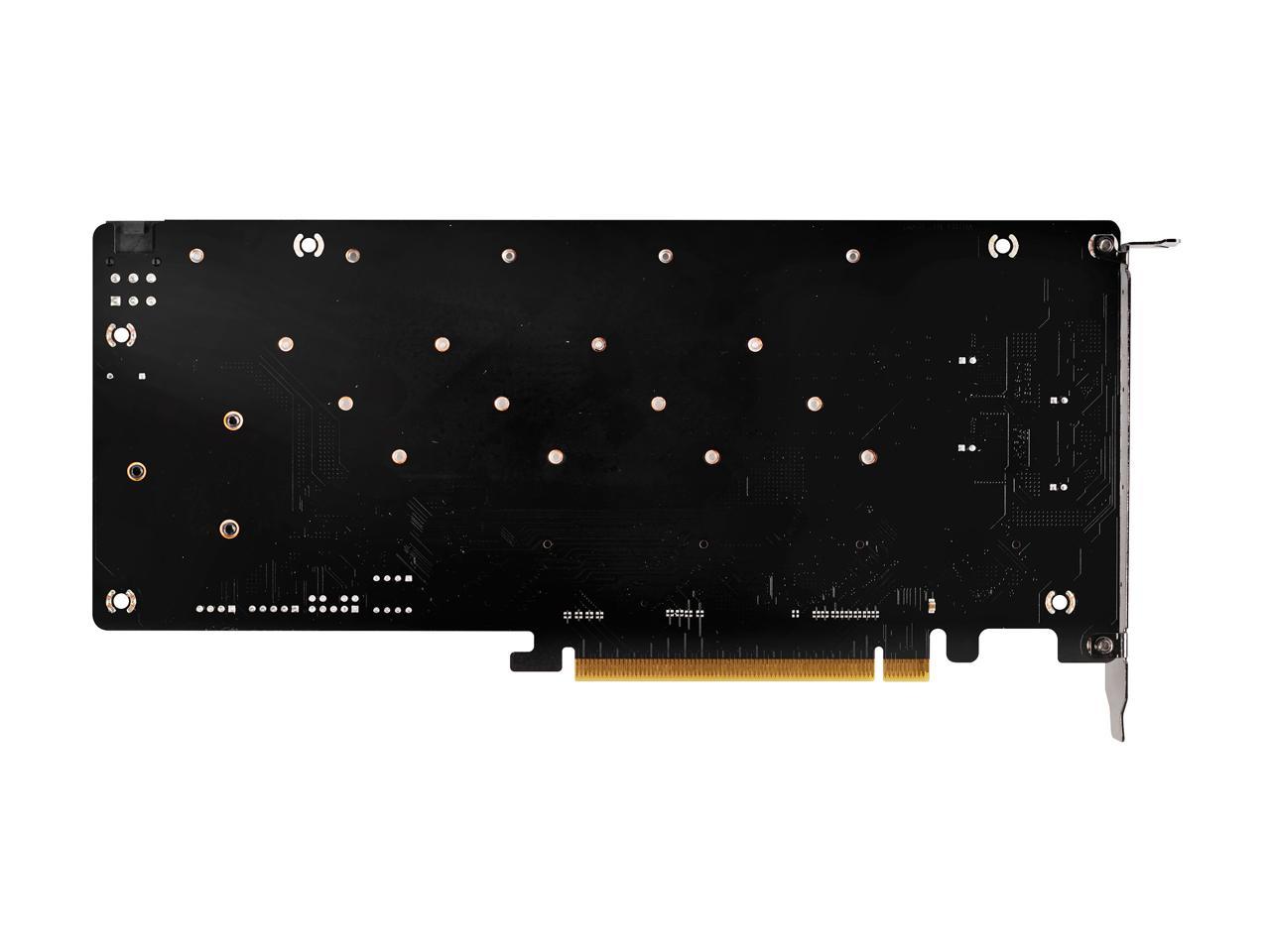 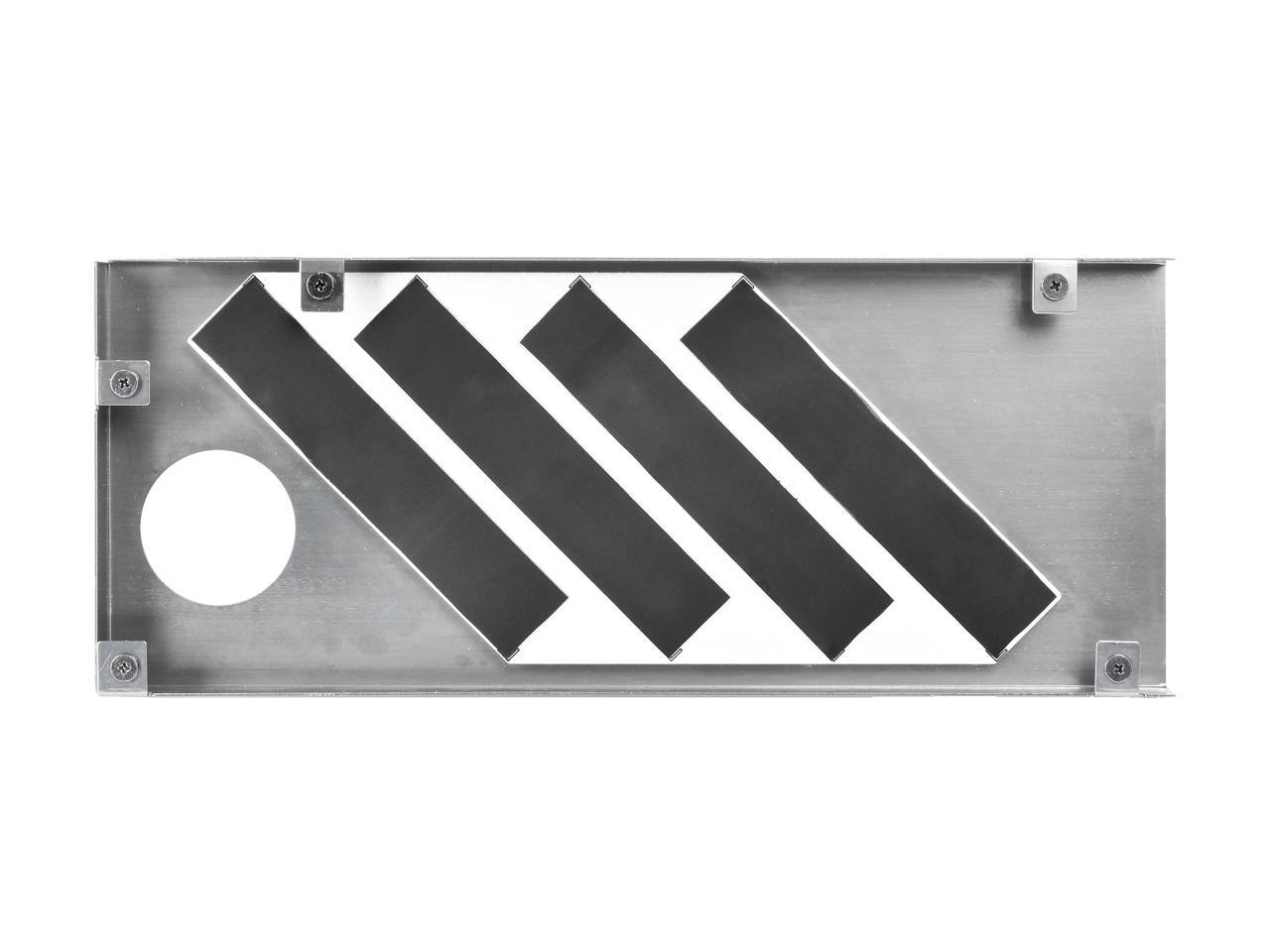 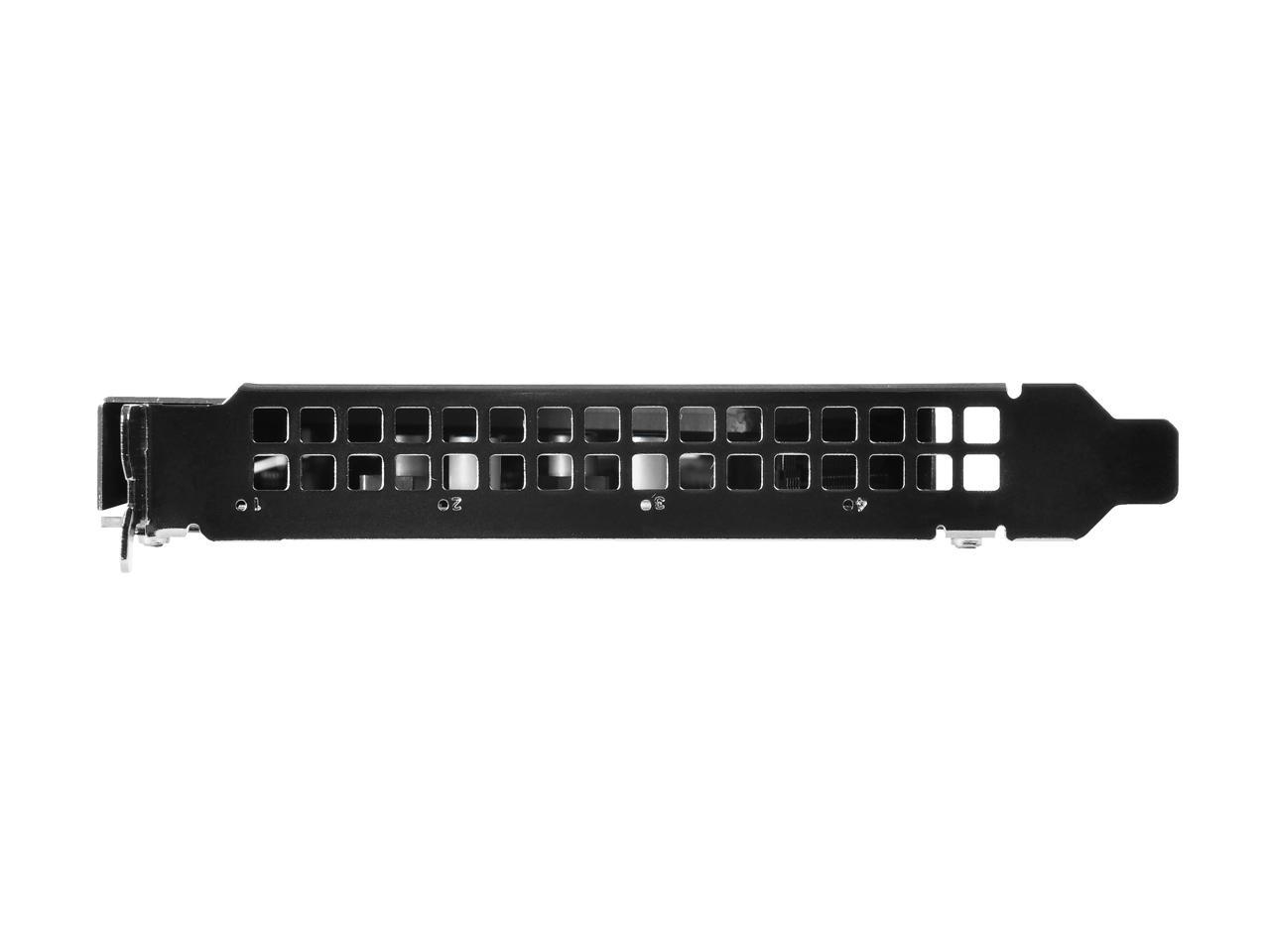 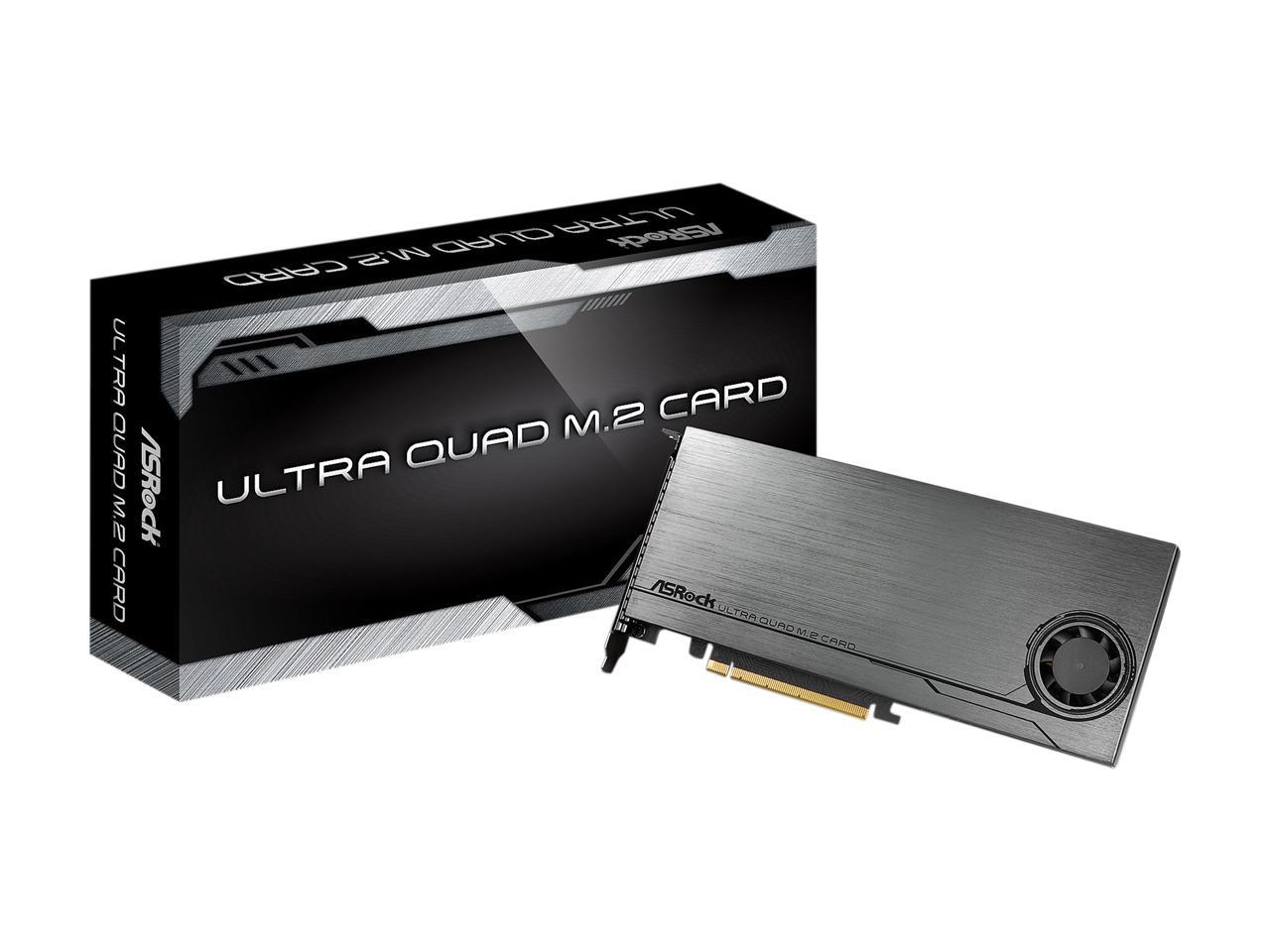 Pros: Easy install and setup using four Western Digital 256GB NVMes. Getting it to boot from a migrated copy of an existing Windows installation was a bit harder but after getting past that hurdle I'm pleased with the results. CrystalDiskMark reports sequential read=6003.676 MB/s, sequential write=2705.469 MB/s. Drive temps <50c with the blower set to minimum.

Cons: The blower. The reason for the missing egg. To be fair, I installed the Ultra Quad into a Fractal Design case that uses Fractal Design and Noctua fans (I like 'em quiet) but the AsRock blower, on any speed above it's slowest, is louder than all five of the case fans combined and the kicker is that at that slowest speed it picks up a rattle that sounds like a mechanical hard drive in action.

Pros: Can install 4 NVMe drives in one PCIe slot. When installed properly, all drives do show up in the BOIS. I am running this in an X399 mobo and I now have 5 (just ordered 2 more) NVMe drives. Despite what ASRock says, this can be used in RAID, (See Other Comments).

Cons: Not mentioned in the 1 page "manual" you must set your PCIe slot to Bifurcation, separating the channels. On my first attempt, with an older BIOS, I could only change PCIe slot #4 from X16 to X4/X4/X4/X4. To do this, you have to dig deep into the dark depths of the BIOS. After a small error on my part, the adapter only showed one drive and not two. I did a BIOS update and the system then let me adjust all PCIe slots to Bifurcation. After moving the card to the proper slot, all was working correctly. May or may not be a CON, but (for best/proper operation, requires 6 pin "GPU" power plug. The manual states only required when using more than 2 drives or if using Optane drives. I connected it just to be on the safe side, and I plan on installing 2 more drives.

Overall Review: As mentioned, the manufacturer says the adapter doesn't support RAID. For that, they are correct. HOWEVER, using Windows management, you can RAID 0 or RAID 1 the drives. The primary reason I purchased this was to install more than the 3 NVMe drives that the mobo can hold, and to run them in dual RAID 1's. (My first level of back-up) Other people have commented about the fan noise, I flipped the switch to were it uses 50% power and I don't hear it over my other fans, (2060RDX, twin 120's in AIO cooler top exhaust, two 120' on the front running about 1/3 speed and a 120 rear exhaust at 66% speed. When the side panel goes back on, 2 more 120's at 1/3 power for intake. Since everything appears to be running correctly, I haven't even looked at the included disk. Since it works how I want it to, I don't plan on installing the utility that is on the disk. Drives must be NVMe type and not SATA type. Other than 1 large HDD for second level back-up, I plan on using nothing but NVMe drives in my system.

Overall Review: Very slick piece of hardware. Metal enclosure. I used this with ASRock Taichi x399 ThreadRipper build. To make it work you need to set your pci-e slot to bifurcation. After I did that the nvme drives I installed were listed with the other ones built in the MB just the same. Raid works great. I have mine in a Fractal Design R1 case(insulated for sound). I can't hear it over my 4 MagLev fans wooshing air out of the back of the case. True 1 slot design. Looks like a workstation video card. If you cannot bifurcate your 16x pcie slot it will not work. I had no problems adding this card to my ASRock TR motherboard. Highly recommended with Taichi x399.Looking for another but they are out of stock again.

Overall Review: I definitely recommend the ASRock ULTRA QUAD M.2 CARD PCI-e to 4x M.2 Card. If your motherboard/chipset combination supports its configuration, which requires you to bifurcate a PCI-e 16x slot to 4x4, as well as enable NVMe RAID Mode, this card will not disappoint! I am extremely satisfied with my purchase! Great job, ASRock! You've got a winner!

Pros: -It did allow me to add 2 additional NVME drives. It only allowed them in 2 slots (can't remember which now) - the other slots did not seem to work - so I am not sure if this would actually work with 4 drives.

Cons: - Included software does not work at all - doesn't show that I have any drives installed and doesn't allow fan control - Extremely loud fan (which since the software doesn't work, I have to set a jumper) - Not all slots appear to work - Reached out to mfr twice about software and slots not working and no response.

Overall Review: I am using an ASRock x399 Fata1ty board that support bifurcation - with it in the correct PCI-E slot and have tried both the recommended and latest BIOS. My guess is that this is tested on the Intel x299 motherboard.

Did you find this review helpful?
Manufacturer Response:
Dear Joseph, Sorry for any inconvenience this may have caused you. We will be more than happy to assist you if the card is malfunctioned. Please contact us at https://event.asrock.com/tsd.asp Thank you ASRock Support Tech Support Email: https://event.asrock.com/tsd.asp
Justin W.
Ownership: 1 week to 1 month
Verified Owner
Garbage4/11/2018 6:36:09 AM

Cons: -Was not recognized out of the box although fan spun up -BIOS change fixed the card from being recognized, however only 1 of 4 NVMe cards were recognized -Card does not leave room for an NVMe with built in cooling so the card bulged quite a bit with cover on. Only fix would be to keep cover off or to remove the heat pads from the inside of the card. -Ultimately never used the item since it never worked properly to begin with. -Fan was incredibly loud, even at 50% speed

3 out of 19 people found this review helpful. Did you?
Manufacturer Response:
Dear Justin, We sincerely apologize for any inconvenience this may have caused you. For the M.2 drives not recognizing, please try following. Reinstall the M.2 drives and assure fully insert to the slots and tighten the M.2 screws. Test all drives are working individually. Check the mainboard has option to set (in the BIOS) PCIE slot 4 x 4 in order to support 4 x drives since each drive take up to 4 x PCIE lanes.. If you have any technical support inquiry, please contact us at http://event.asrock.com/tsd.asp We will assist you shortly. Thank you ASRock Support Tech Support Email: http://event.asrock.com/tsd.asp
John C.
Ownership: 1 week to 1 month
Verified Owner
Best in class, but ONLY real option in class.4/9/2018 8:18:02 AM

Overall Review: I would not at this time recommend this product. I have open Technical support requests with both ASRock and AMD. When I get a decent response from each of them I may be able to recommend it.

3 out of 16 people found this review helpful. Did you?
Manufacturer Response:
Dear John, Sorry for any inconvenience this may have caused you. The performance is based on adopted drives and whole system configuration since this is the M.2 to PCIE adapter card. (please note this is not a RAID card). If you have any technical support inquiry, please contact us at http://event.asrock.com/tsd.asp We will assist you shortly. Thank you ASRock Support Tech Support Email: http://event.asrock.com/tsd.asp
HUSAIN K.
Ownership: 1 day to 1 week
Verified Owner
Not Work For ME11/8/2018 7:43:27 AM

Pros: Very Bad Bad Not Work only 1 BIOS change fixed the card from being recognized, however only 1 of 4 NVMe cards were recognized Mtherboard: Fatal1ty AB350 Gaming K4

Cons: Very Bad Bad Not Work only 1 BIOS change fixed the card from being recognized, however only 1 of 4 NVMe cards were recognized

Overall Review: Very Bad Bad Not Work only 1 BIOS change fixed the card from being recognized, however only 1 of 4 NVMe cards were recognized Mtherboard: Fatal1ty AB350 Gaming K4

0 out of 15 people found this review helpful. Did you?
Manufacturer Response:
Dear Husain, We sincerely apologize for any inconvenience this may have caused you. Unfortunately, AB350 Gaming K4 does not support PCIE switch 4 x 4 setting. If like to using this Ultra Quad M.2 card, please consider X399 boards or X299 boards with PCIE switch 4 x 4 support. If you have any technical support inquiry, please contact us at http://event.asrock.com/tsd.asp We will assist you shortly. Thank you ASRock Support Tech Support Email: http://event.asrock.com/tsd.asp