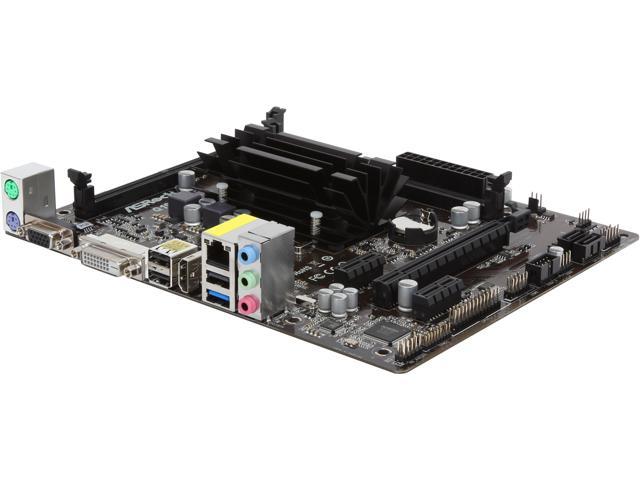 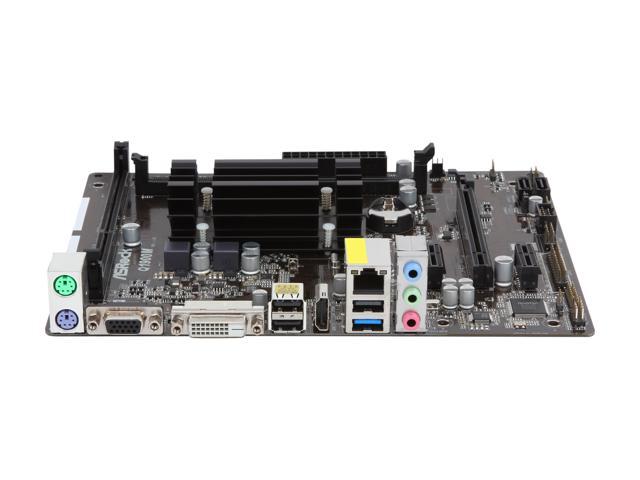 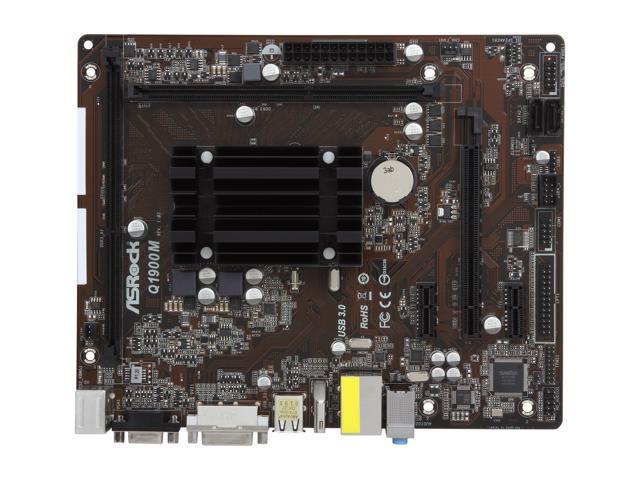 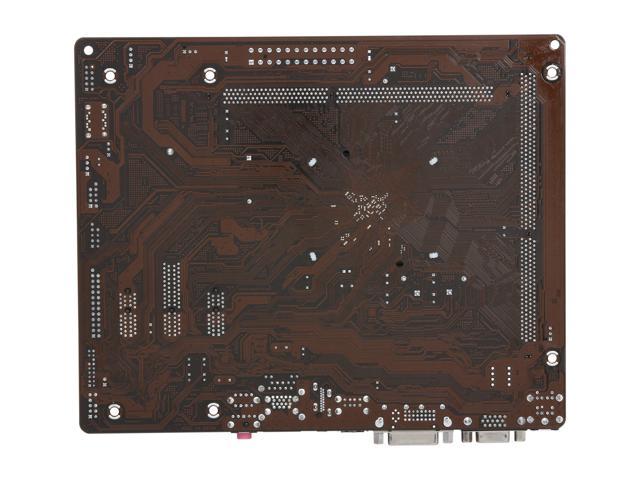 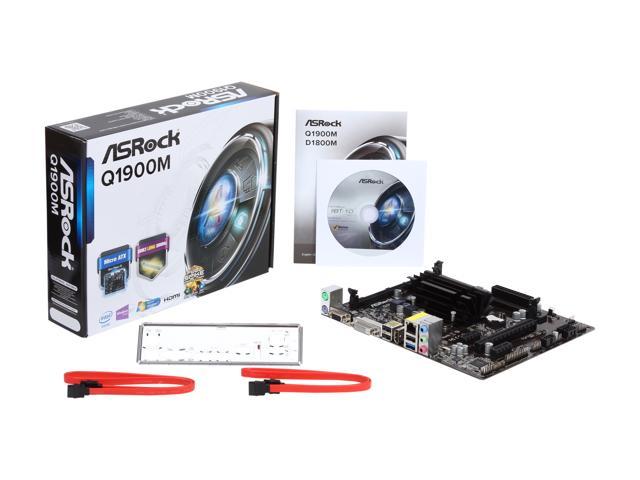 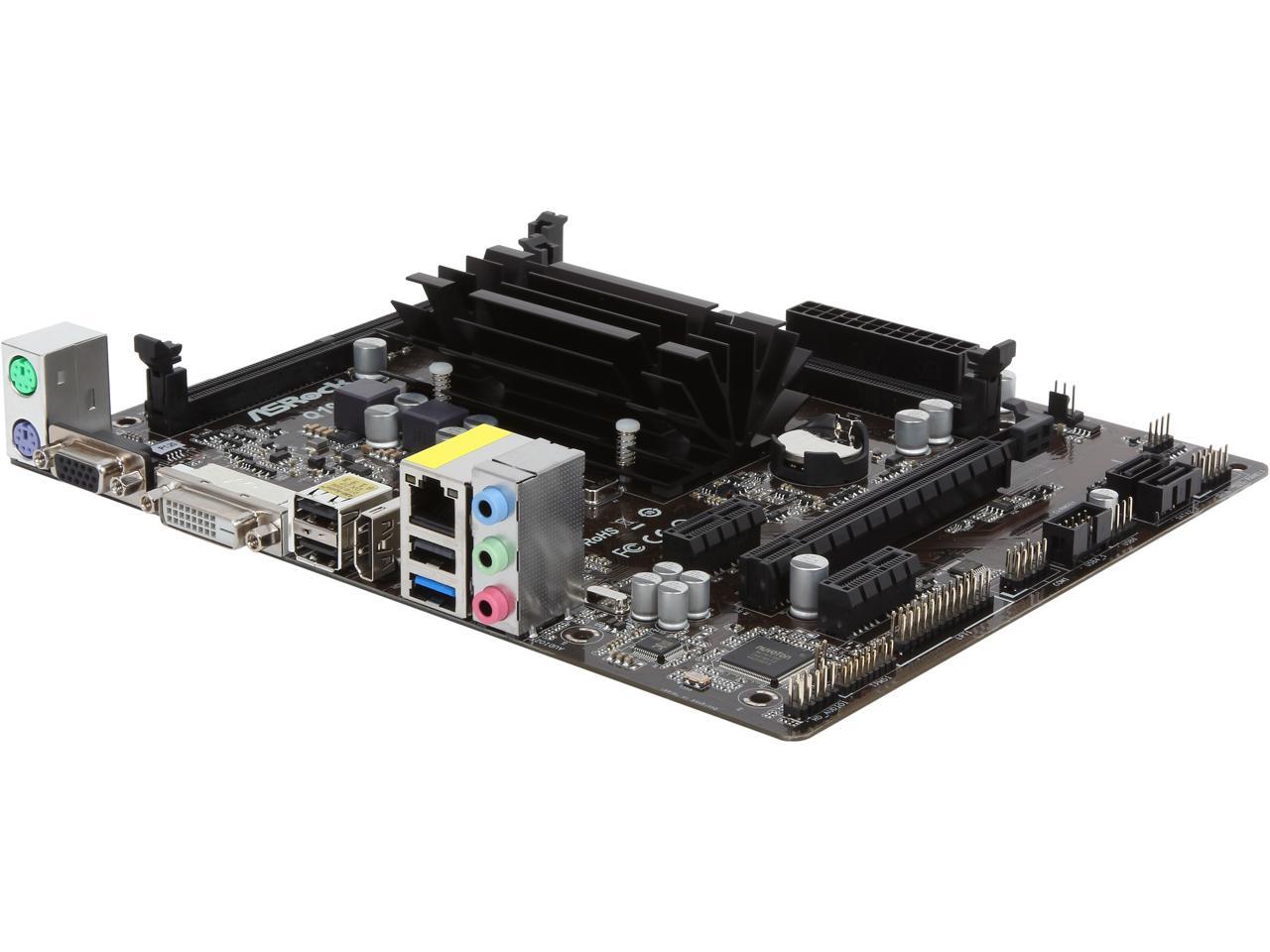 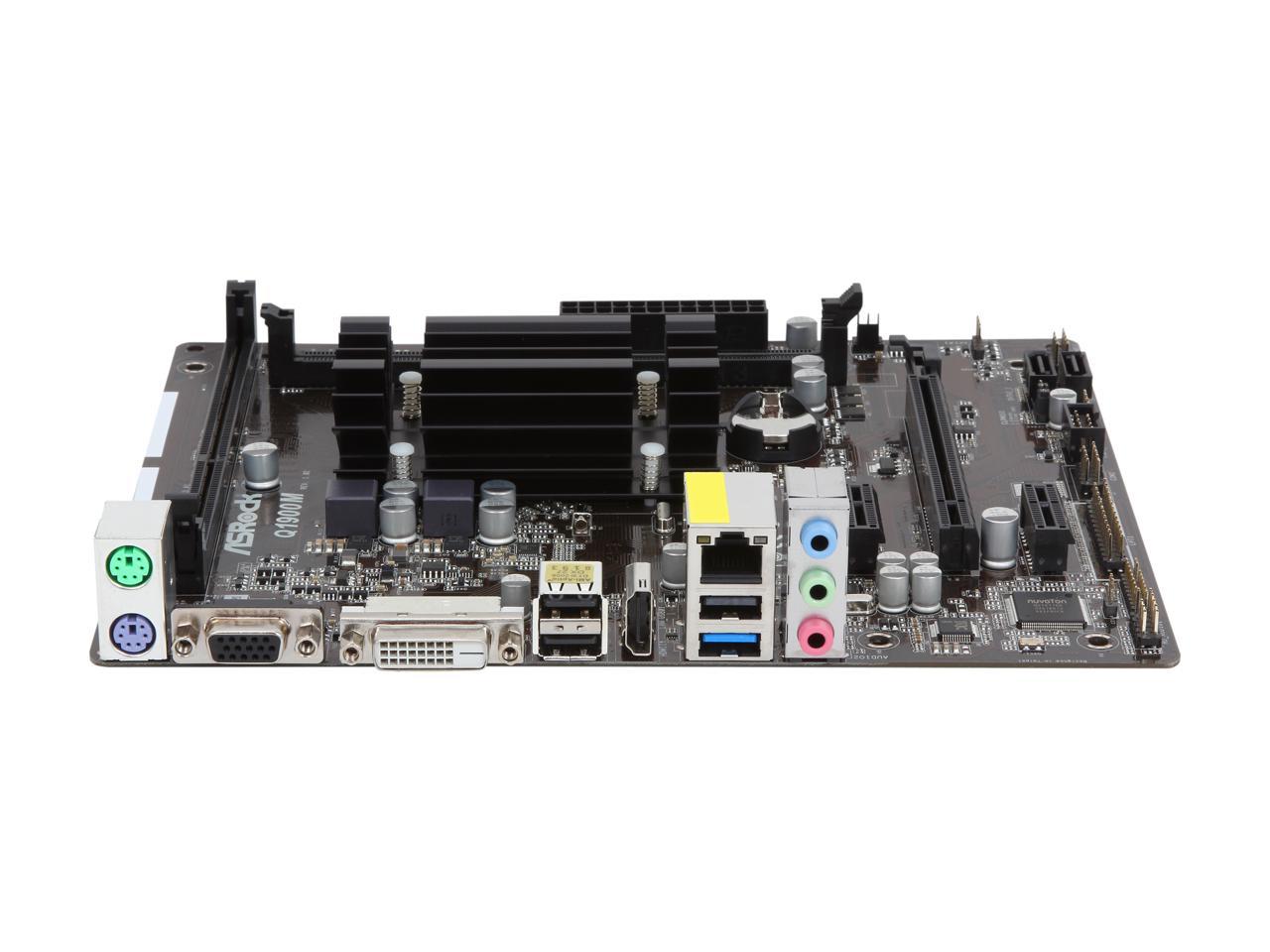 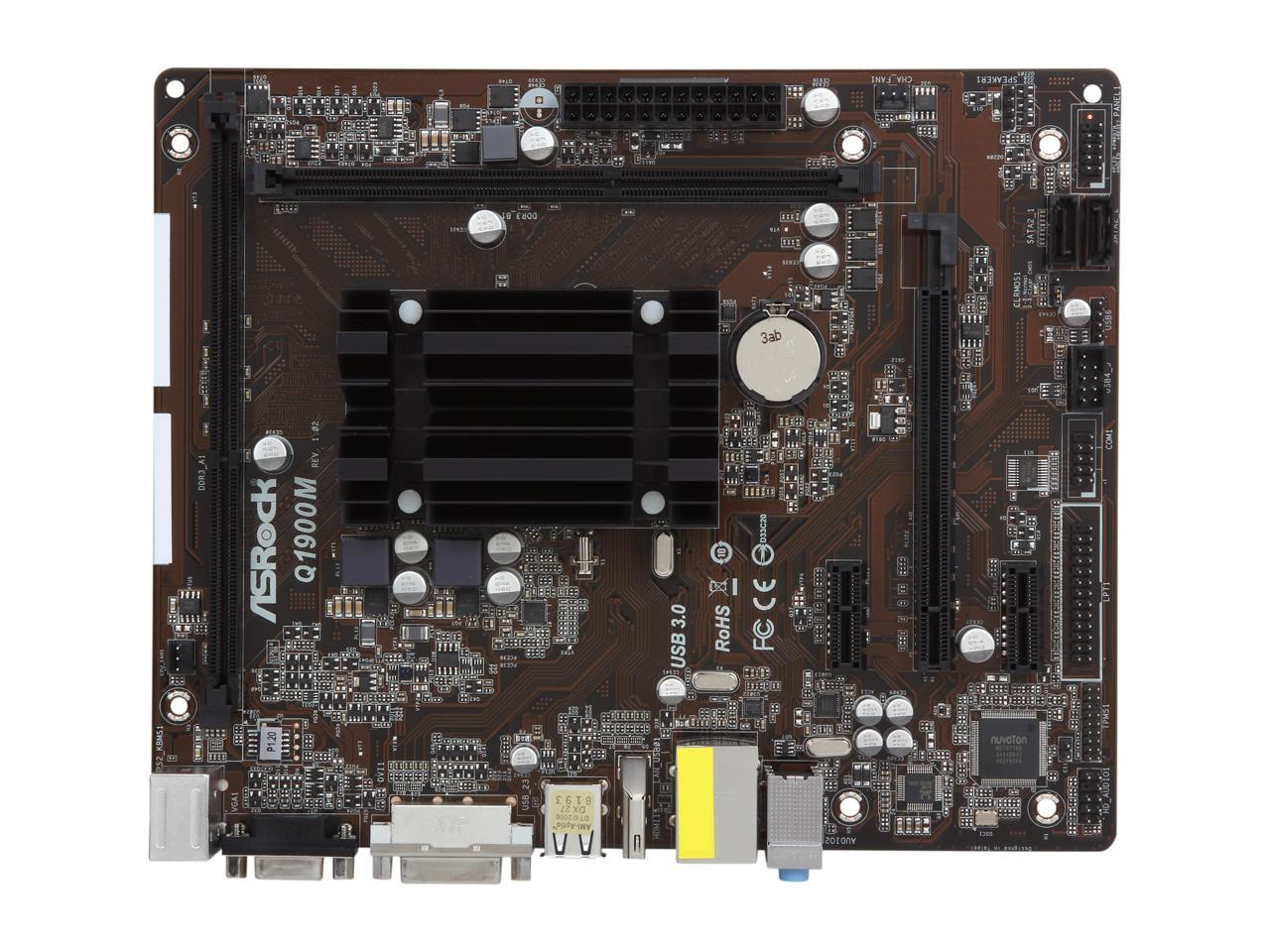 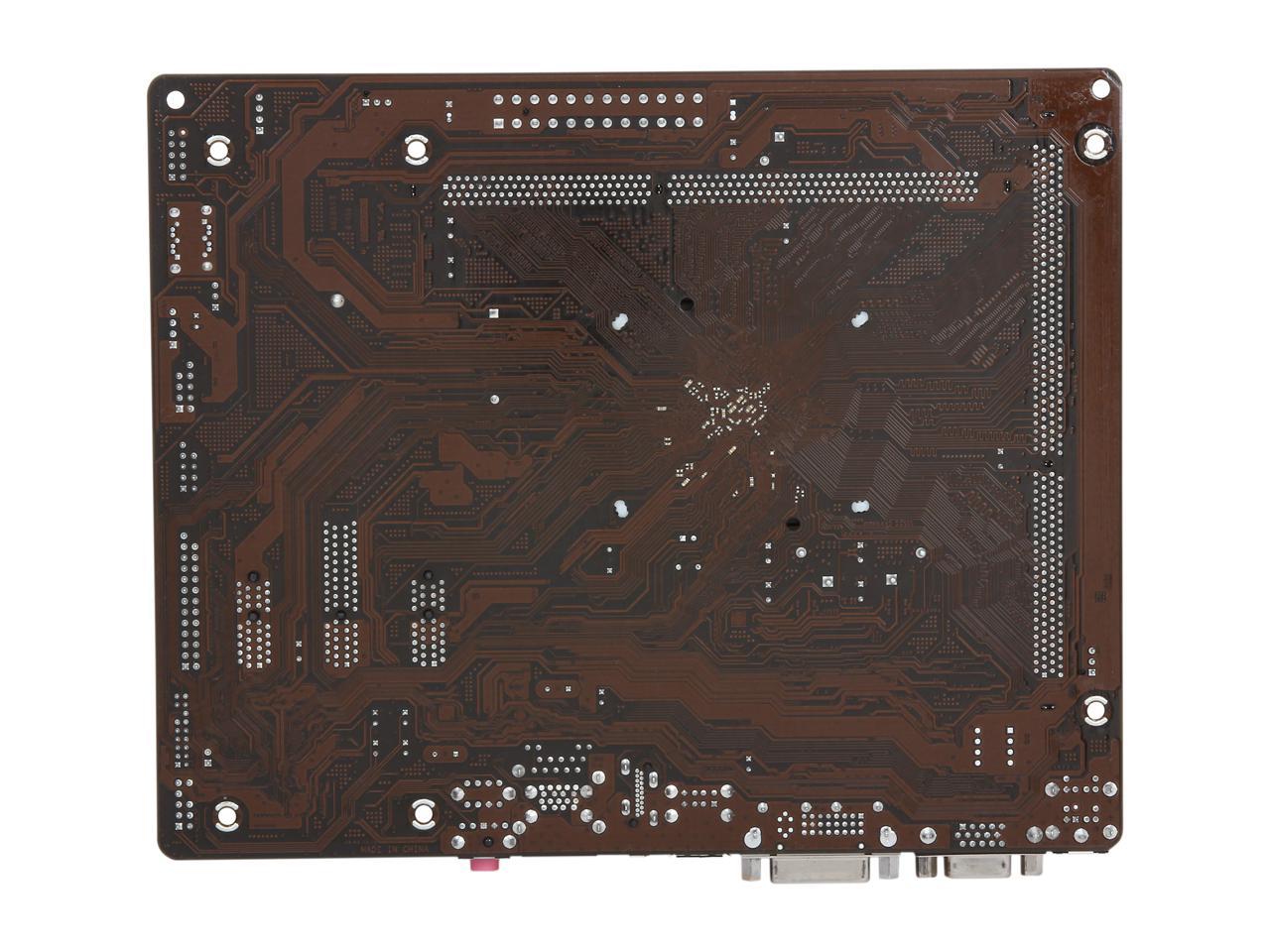 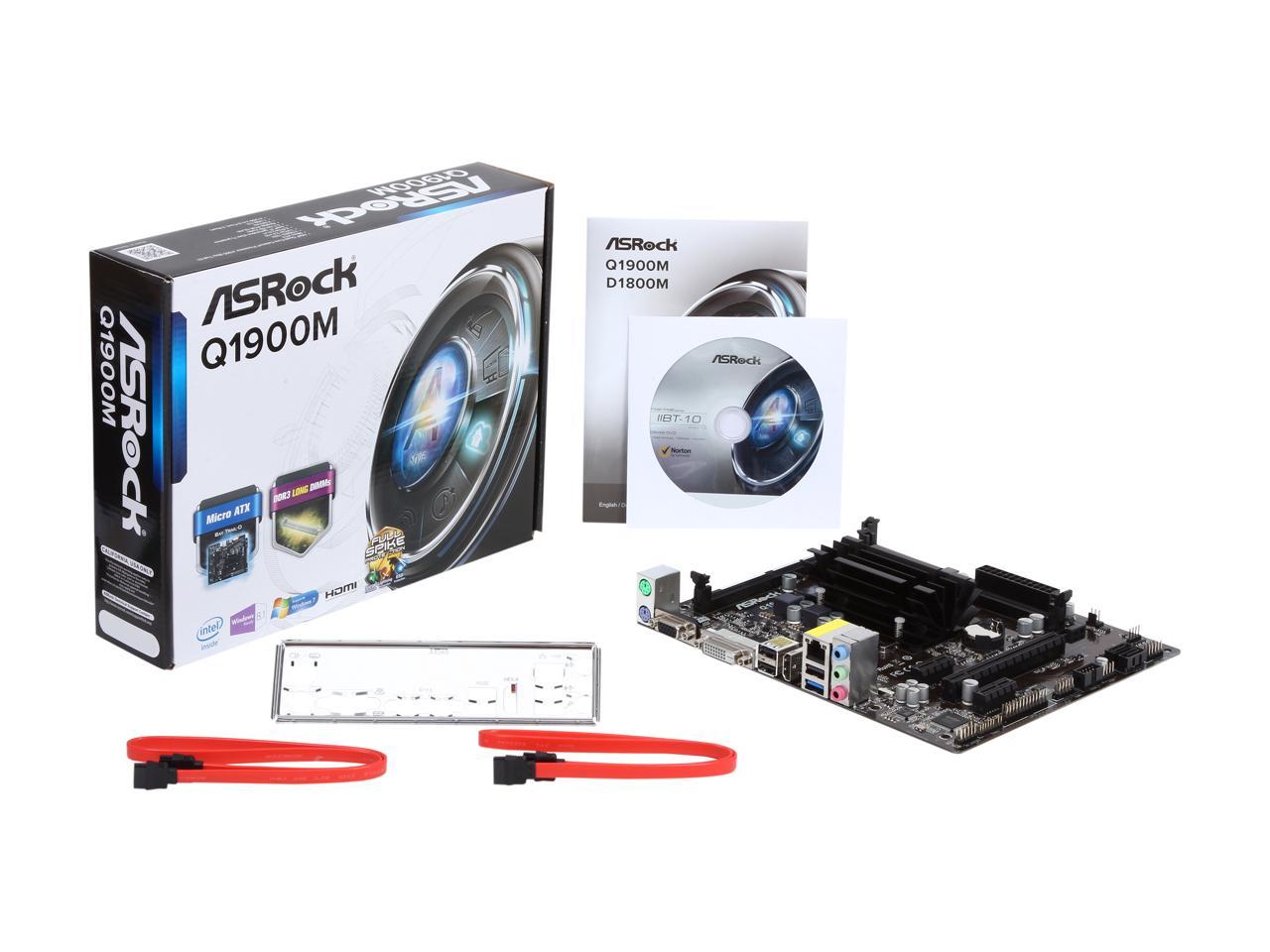 Learn more about the ASRock Q1900M

Pros: The Processor can handle just about every basic task possible and even when being stress test, stays below 39 Degrees Celsius. Can play 1080p movies and Youtube video without lagging. BOIS Update was amazingly easy, thanks to ASRock. 22w being pulled from tower doing a full bench with one fan. 16w average use. Also, boots in 14 Seconds with Windows 7 64Bit with help from the SSD. 10/10, would recommend this board for a low power server, kids computer or one for grandparents.

Cons: Motherboard ram placement is awkward, made it difficult putting in the screws and plugging in the exhaust fan. No Sata 3 or front USB 3.0 connectors, but I already knew that prior to purchasing, just wish this board had those two features.

Cons: PCI-Express 16x slot is 2.0 and really 1x. Only 2 Sata ports. Ram surrounds CPU cooler, cutting some airflow to it.

Overall Review: So really, I wanted to do this review to see if this board would be worth having a video card in it for gaming. I did 3D mark with the onboard Intel HD graphics and one with an AMD 7750 (no external power and low profile). The power consumption went from ~30w to ~70w peak during this test in my rig. Test - Onboard Score - +7750 score Firestrike 1.1 - 171 - 1905 Skydiver 1.0 - 600 - 5610 Cloudgate 1.1 - 1604 - 5709 Ice Storm 1.2 - 18985 - 37482 The physics score was rather uneffected, but the graphics scores went up considerably. Skydiver went from a slideshow to a near-smooth experience. Firestrike, however, was still pretty rough. Reglardless, even with only 1x operation, it seems a video card is worth it if you want to attempt to game from the awesome little J1900, as it struggles with video performance. I'm using a Silverstone ML04 (with 4x Enermax Enobal fans turned down), older Sandisk SSD, Older OCZ Power Supply, Pioneer Blu-ray player, and some cheap Nanya 667mhz ram I had laying around. Idle takes less than 20 watts and, outside of the power supply fan, it's dead silent. Going to use this for a HTPC, but figured I'd experiment as a gaming computer as I've used the J1900 in the Gigabyte Brix for Steam Streaming. Saw the J1900 in that was getting bottle-necked by the processors poor video performance in local gaming, so figured it was worth a quick test on this board to see how well a vid card would help. Won't be keeping the video card in this box as the J1900 can stream just fine, but hopefully this little review helps somebody.

Cons: - sometimes BIOS can't find the boot device, particularly when OS performing a reboot. - DIMM slots only had one lever on each side (first time I've seen that). - Sata 3 would have been nice, but not required for what I needed. - Single thread performance is a little lacking, but depending on what you're using it for you can get more performance per watt if you can use 4 cores.

Overall Review: Paired it with a small SSD and no case fans at first power on - wasn't used to hearing *nothing* when power applied, but it it came right up into the BIOS. Kept having problems that the BIOS wouldn't recognize the boot drive particularly on a reboot from the OS, although power down/disconnect/reconnect it always worked. Changed sata cable/drive/and power supply connector, and lately haven't had problems. I see that BIOS 1.30 is now out and that may address this, but I won't load it unless I start having a problem again. I'm using this in a MAME cocktail cabinet. It's the perfect beast for that -- more than enough horsepower, no worries about cooling, and absolutely quiet (even the power supply fan doesn't really make noise because it draws so little power). It probably could work well as a HTPC.

Pros: Needed a low-power embedded board to go in a 1/2 depth 1U case for a basement VPN server to connect out, and in, on. Great server for the price. Was quite surprised to fire it up and find it had Intel V-T, and decided to stick 16GB of RAM in it with a 2TB SSHD, and am running SoftEther, PiHole, and even installed Rancher and am running a little Kubernetes node with MariaDB and a few other things on it. Runs smooth as a rock, and never goes above 82F. This fit perfectly for this use in an older 1U Baracuda VPN box. These VPN boxes can be snagged on that auction site for ~$100. You just take the motherboard that's in there out, throw it away, and stick this in. Works beautifully.

Cons: None that I have found so far.

Overall Review: Note that I didn't run this on Windows, but for me, this was as plug and play as it gets.

Pros: For years I've been using an old AMD dual core as my FW. The new hardware has much low power consumption. Fluctuates from 15.6w tp 18.6w.

Cons: It works and it's a pfSense FW - no cons - no complaints.

Cons: Attached a 530 series Intel SSD. It would recognize SSD then drop out when in UEFI mode. I upgraded uefi bios to 1.50 and problem still persisted. I installed another new 530 SSD and same problem. Swapped Sata cables to rule them out and did not fix. Both SSD's were brand new. I installed a new regular drive and all went well. . ASRock should investigate this, as this killed my ultra quiet server plans. -1 Egg

Overall Review: SSD's were verified good when installed into another motherboard (ASUS Mark 1). Was hoping to utilize SSD for a low power fast fileserver. Other than that all went well. For a Bay Trail platform this system actually runs great, and the price was cheap. Too bad this board didn't support ECC but that was expected for the platform. Runs Windows 8.1 and Manjaro Linux pretty well. Was a little disappointed over the SSD issue.

Pros: •consumes 9 watts of power with one 4GB mem stick and 1 HP 4 port NIC. Important since this runs 7x24 providing me internet access, VOIP, cable,wifi. My old box box sucked down 70 watts with same configuration, so this thing pays for itself in 6 months •price after rebate was a smoking deal. I would say a great bargain at Newegg's price •BIOS was really impressive-- connects to the internet and downloads and installs BIOS updates for you. Sweet. •Fanless- no noise, no dusty failures down the road

Cons: •could not get this to boot of IPCop USB thumb drive. Not uncommon for the BSD IPCop distro, but a pain for me no less. I tried many different flavors of USB thumbdrive sizes and manufactures but no love. My workaround- cable up a CDRom drove to the mobo, install onto my SSD, shutdown and disconnect the CDRom.

Overall Review: It would boot off the following USB media without issue: Win8 install, Macrium, Ultimate Boot disk, PFSense. I tested to make sure I did not have port or mobo hardware issue - no eggs deducted, just an BSD IPCop thing.

Pros: I bought both the BIOSTAR J1900MH2 and the ASRock Q1900M boards to use as a home router and a home NAS server. I'm very happy with the j1900 in these tasks. The boards were dirt cheap, have great expansion options (16G RAM, 3 PCIe slots, and USB3!), and use little power.

Cons: This Biostar board has a few less ports than the Asrock model (DVI and both internal and external USB port differences). This wasn't a big deal to me, however I also found that the Biostar board does not seem to support SATA hotswap on the internal SATA ports, while the Asrock did it just fine. So, if you care about SATA hotswap, go with this Asrock even though it tends to be a few dollars more.

Overall Review: Add in a cheap gig NIC and you have a low power router that blows away a Soekris in performance and is cheaper. Normal DDR3 RAM and PCIe slots make it easy to reuse leftover hardware you might have lying around. Put 3 cheap 4-port SATA cards into one of these and you have a monster home NAS server with 14 SATA ports plus USB3 for even more ... for crazy cheap.