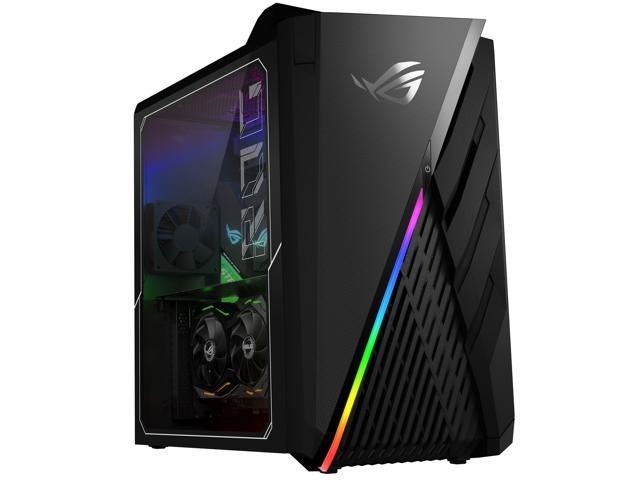 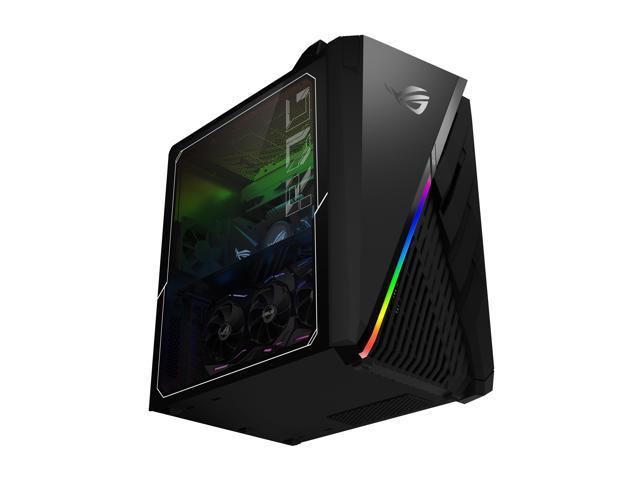 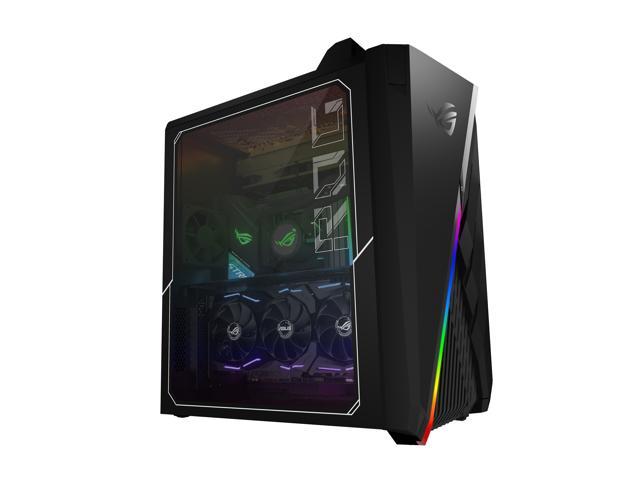 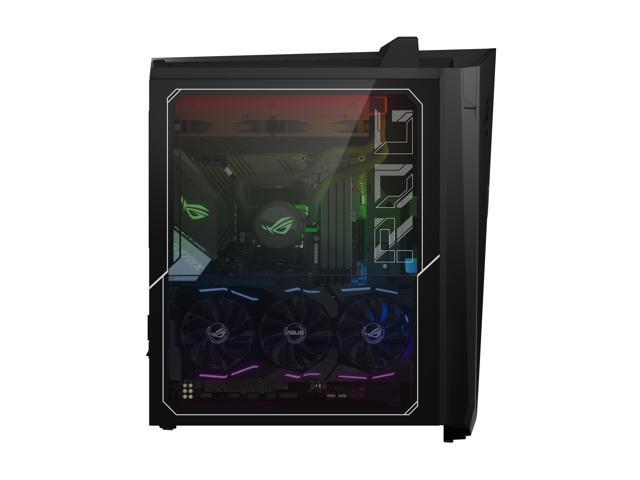 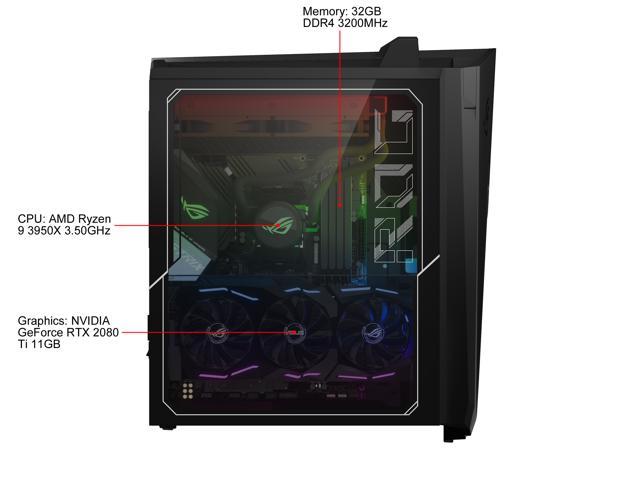 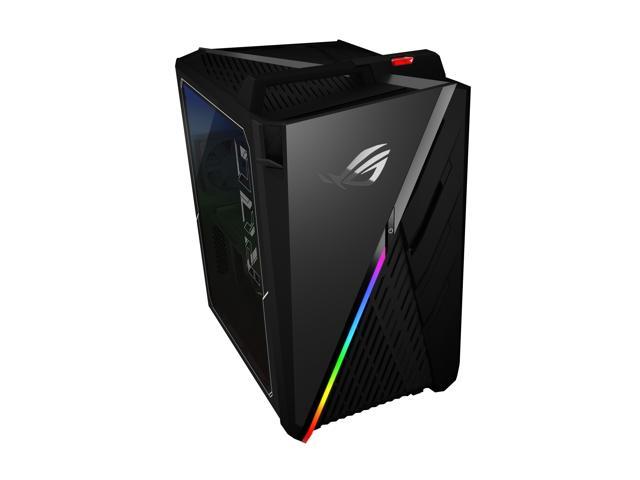 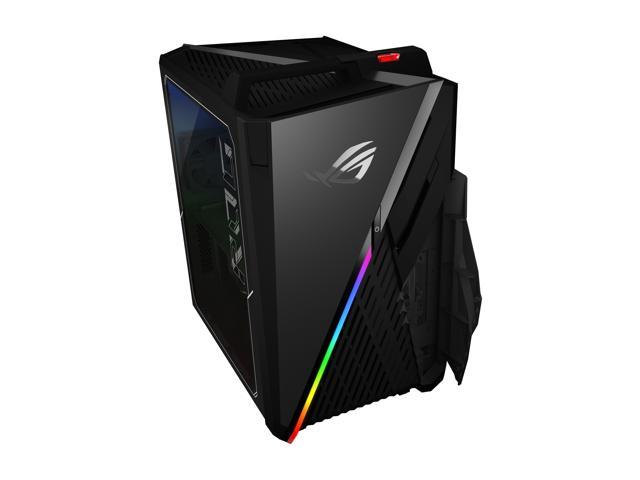 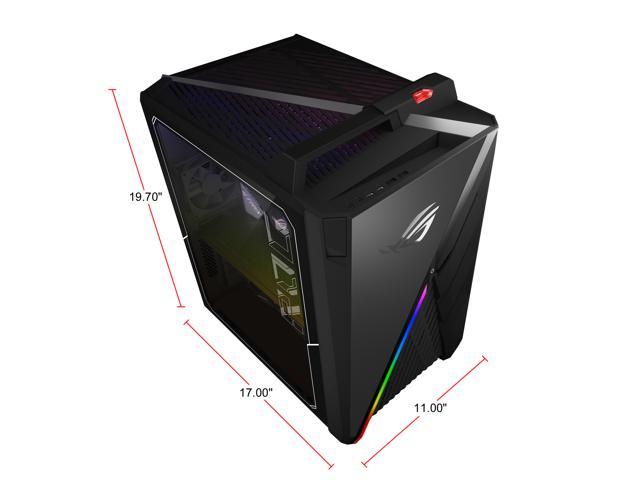 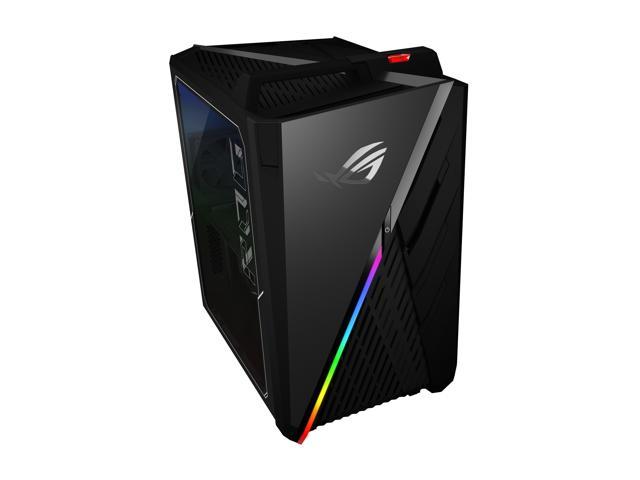 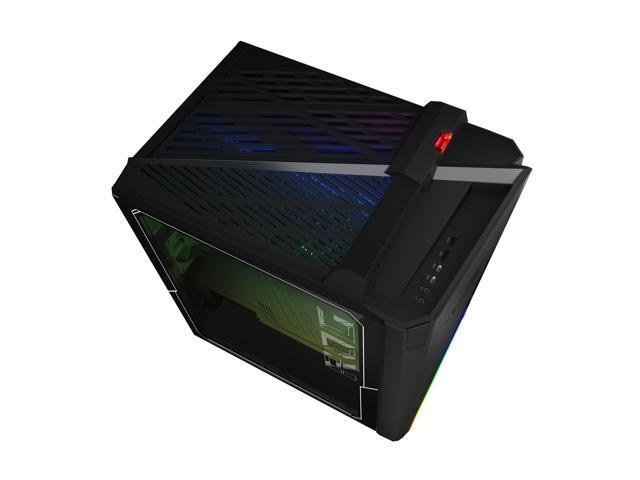 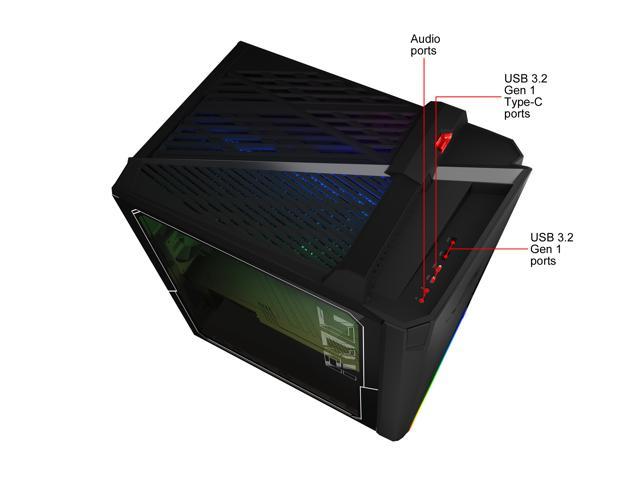 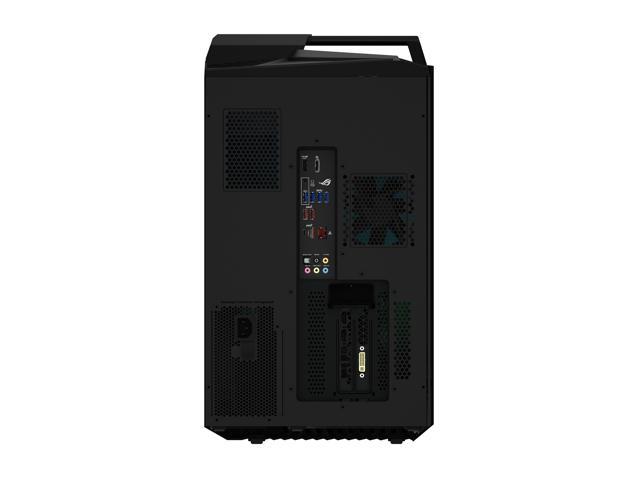 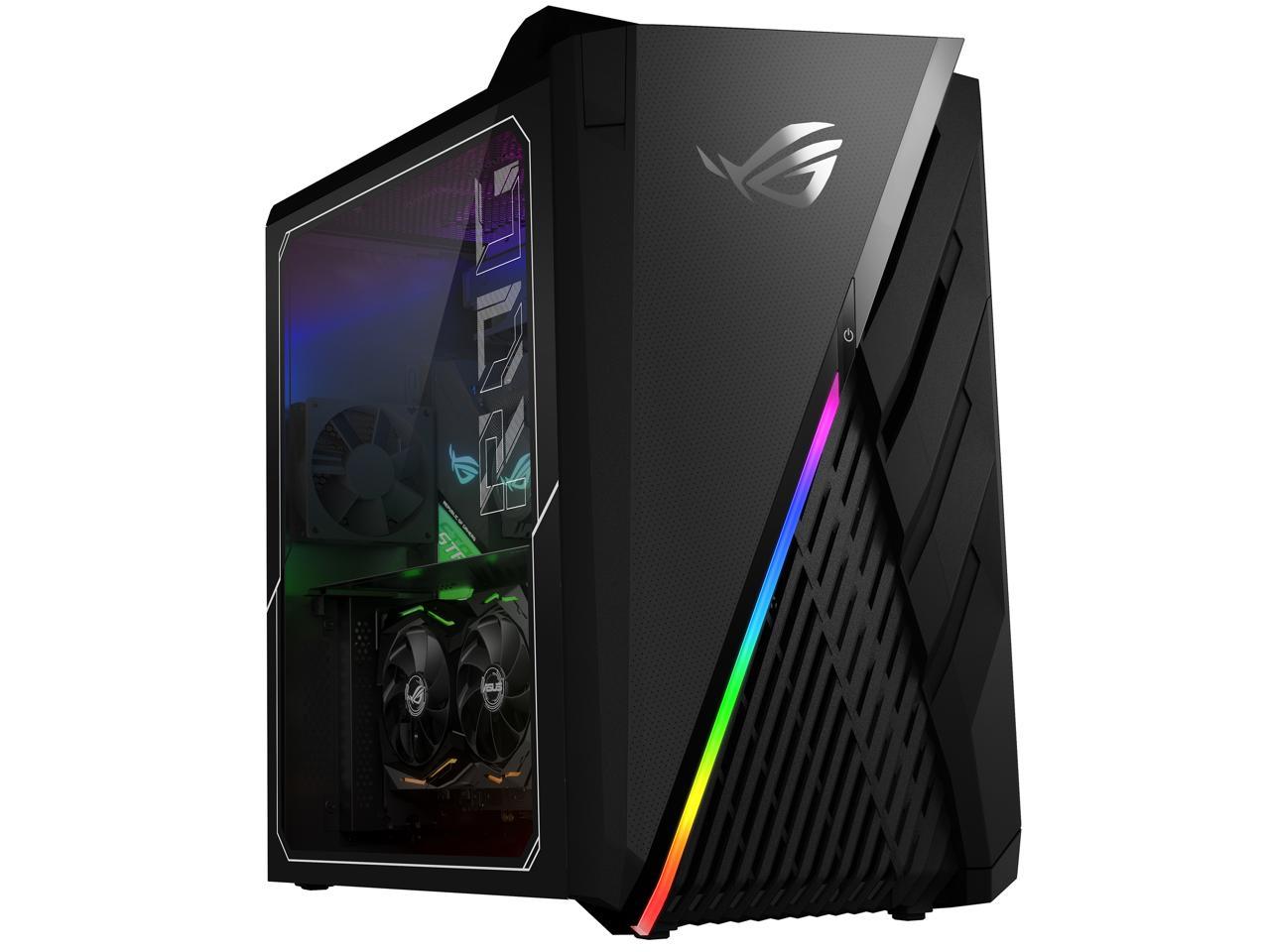 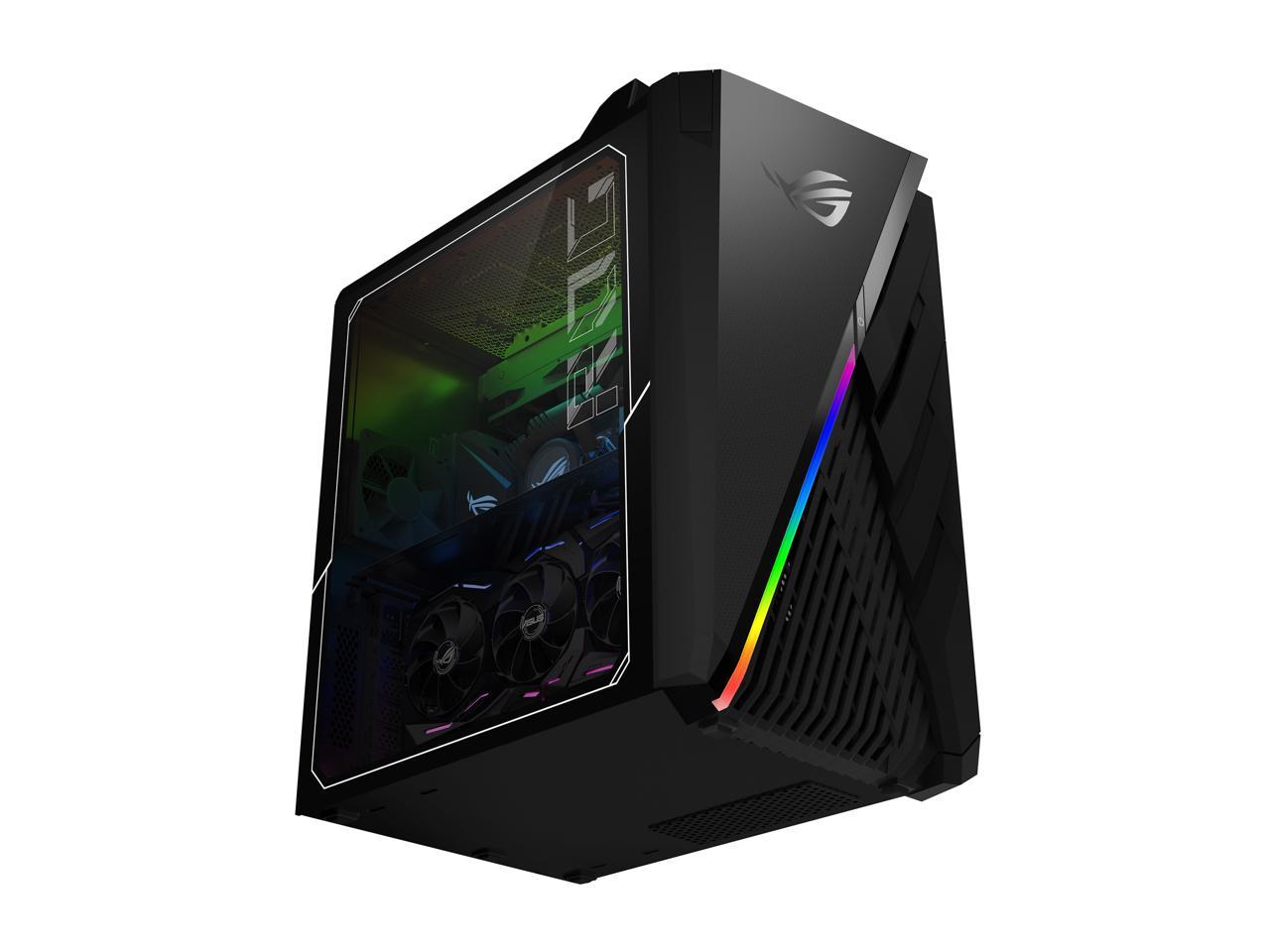 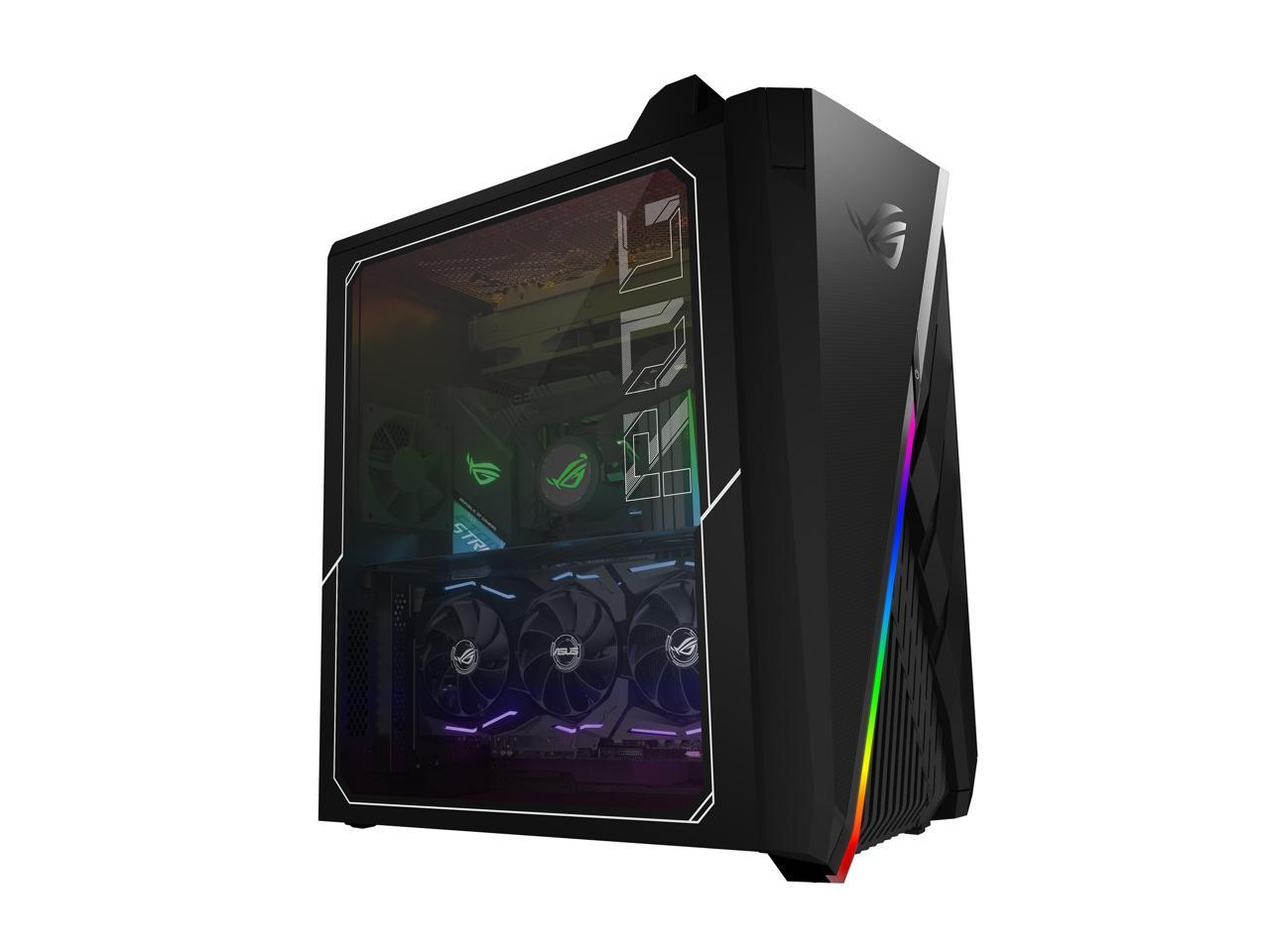 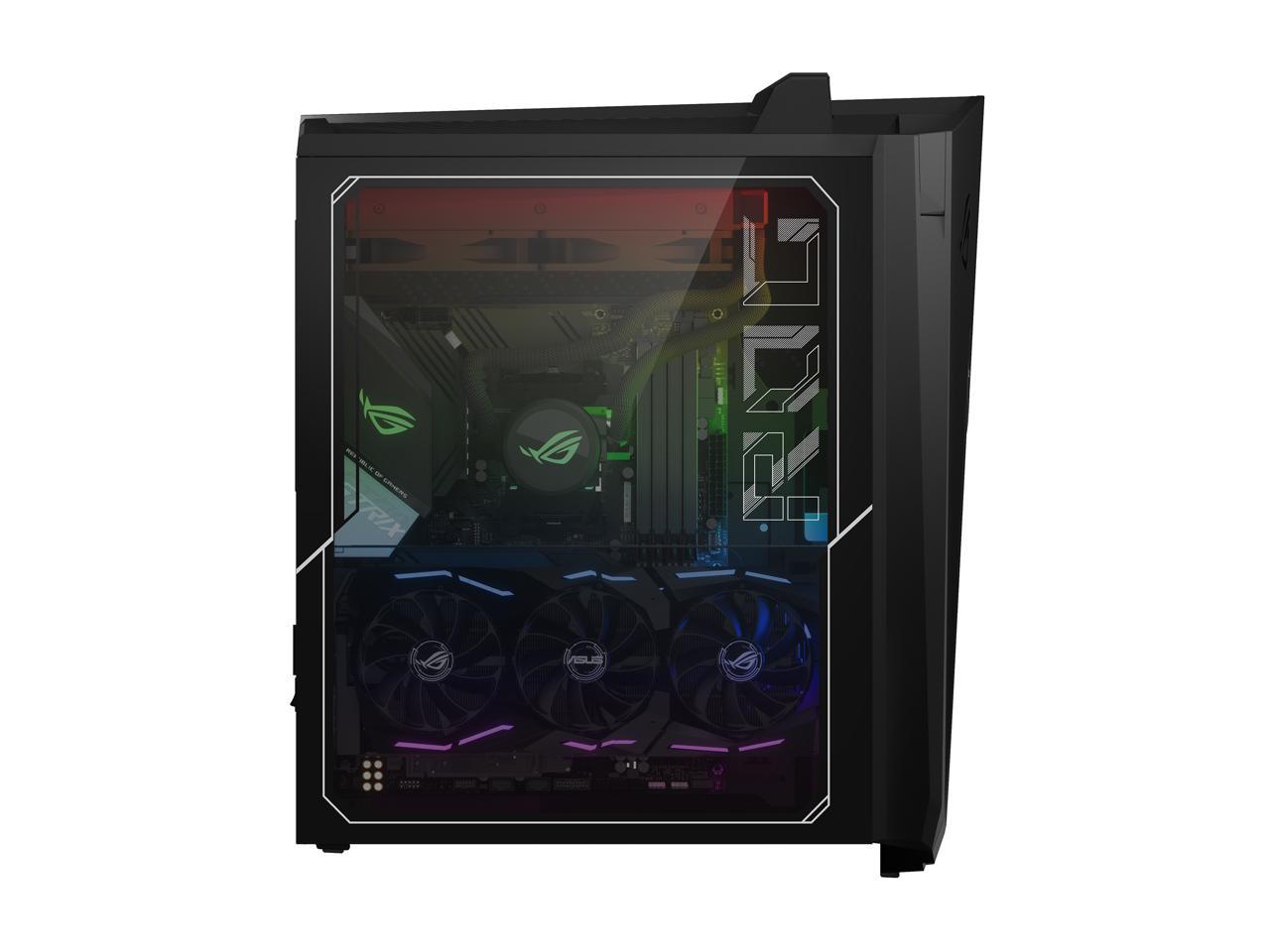 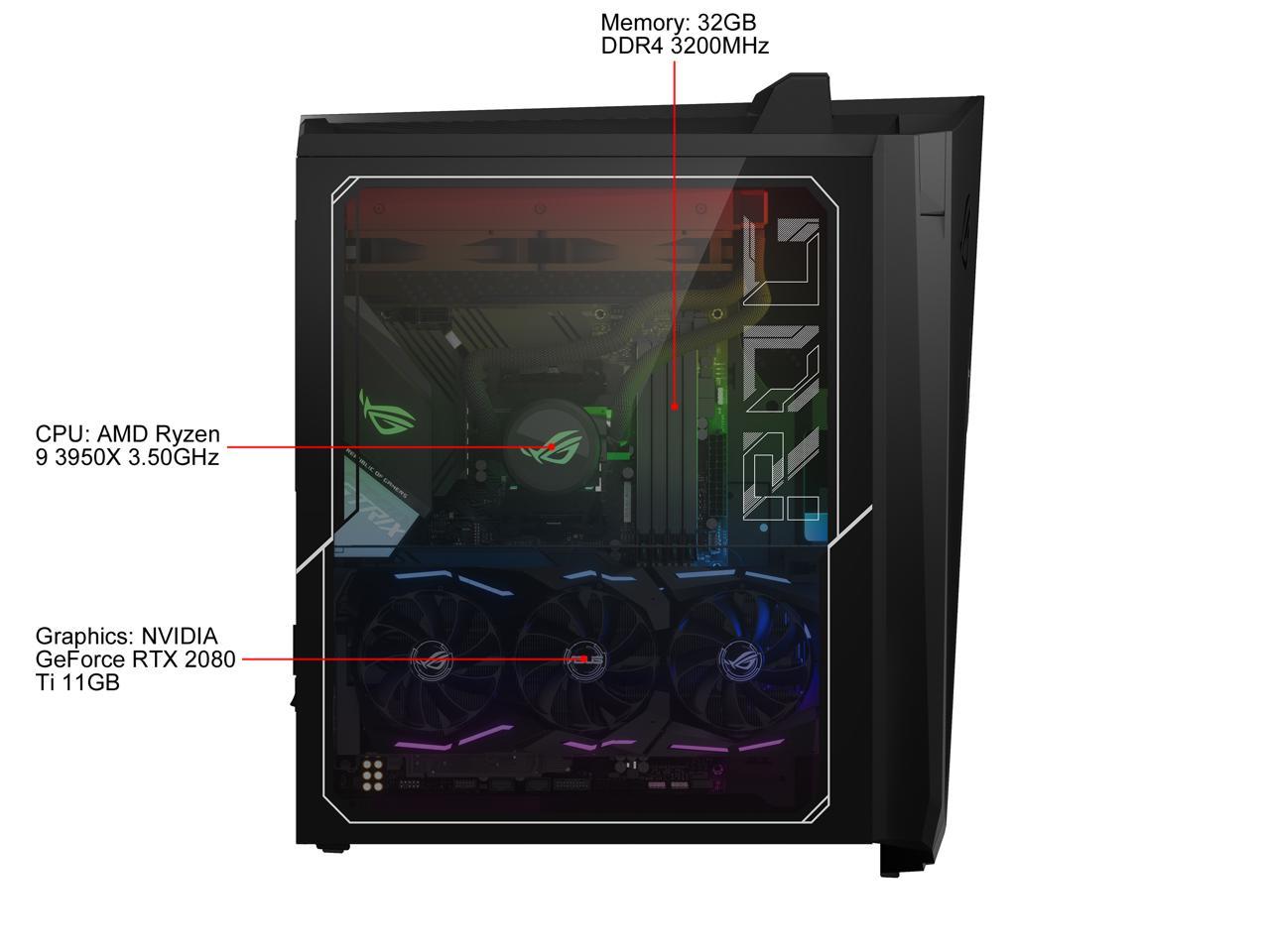 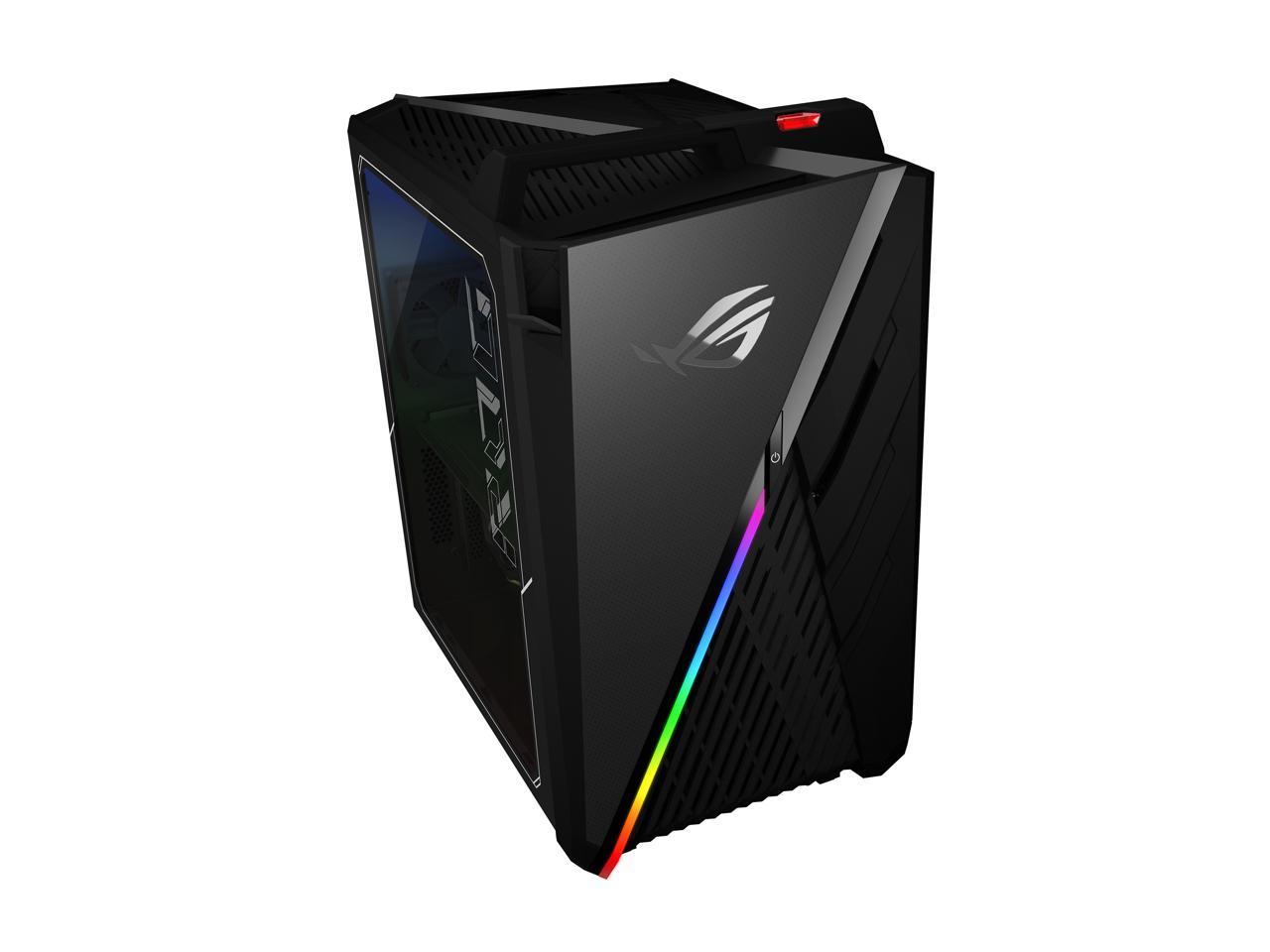 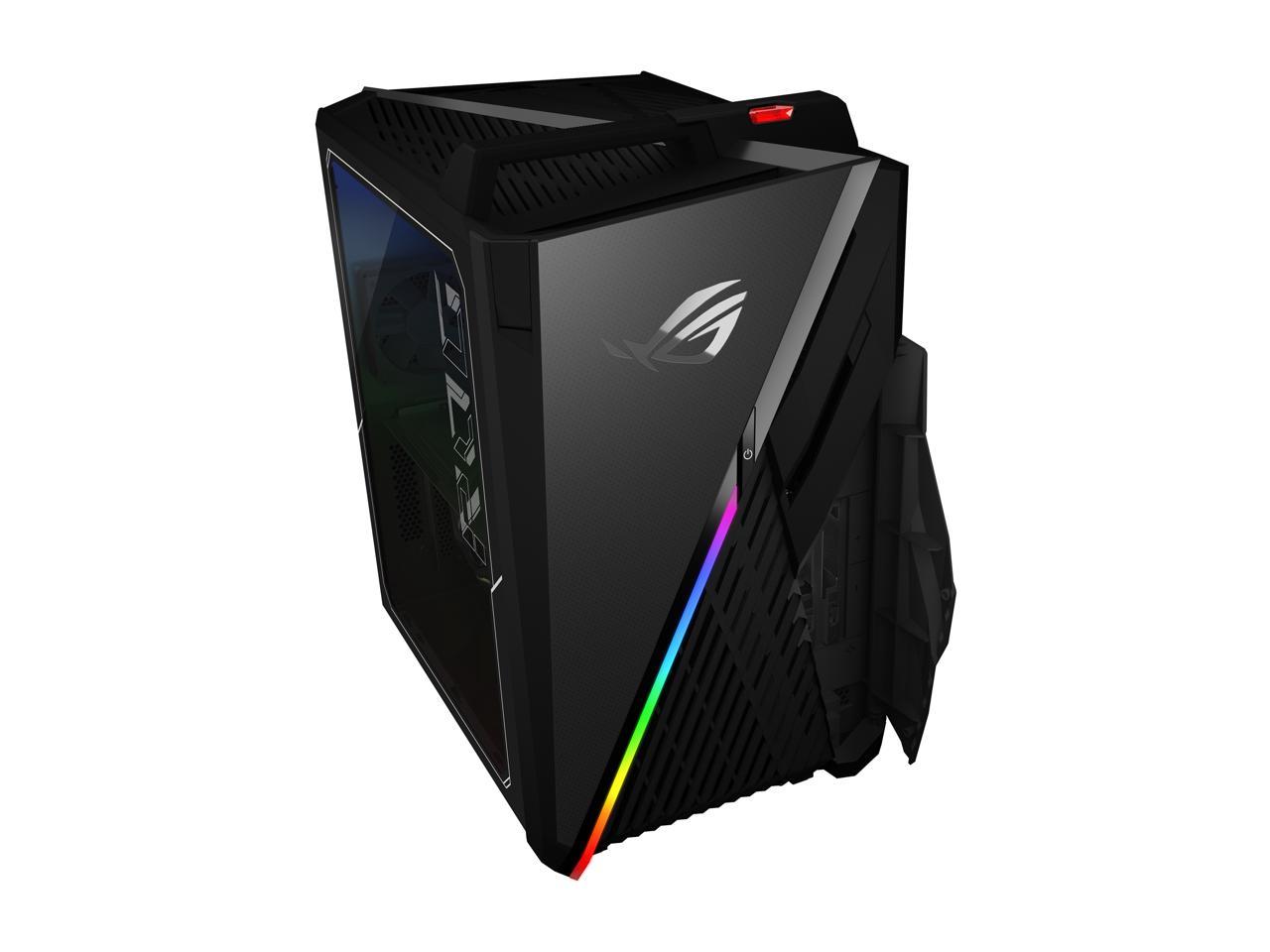 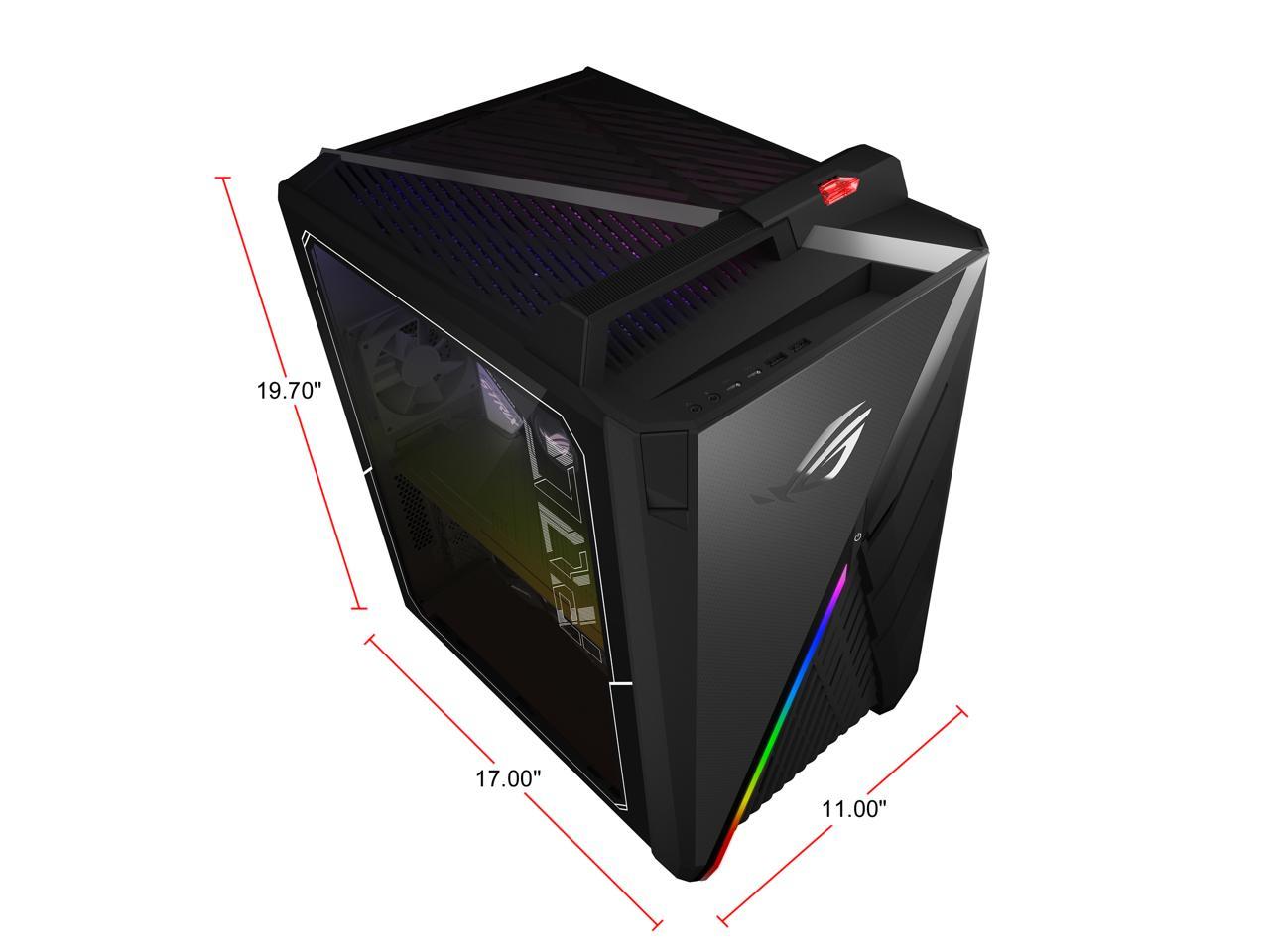 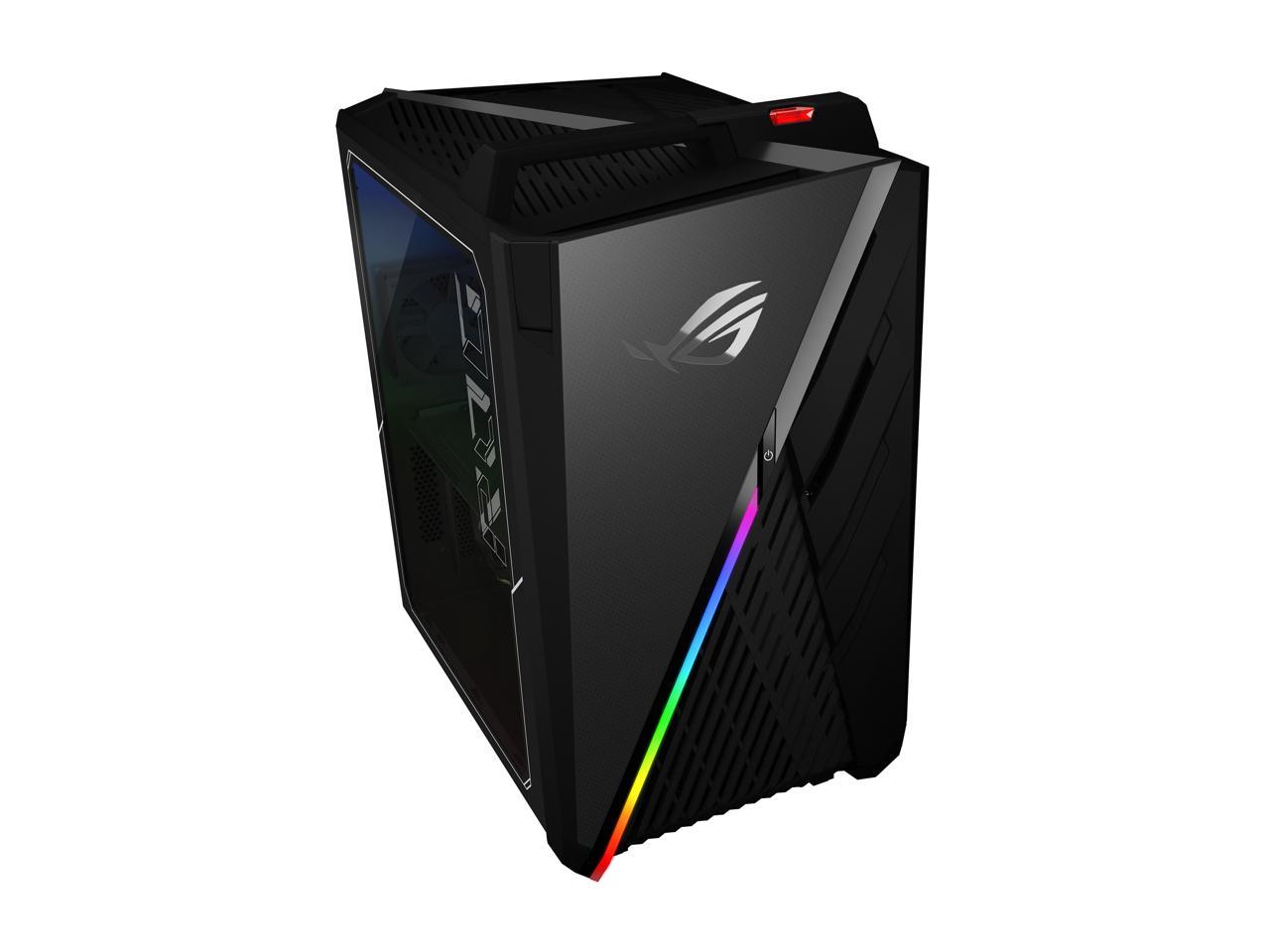 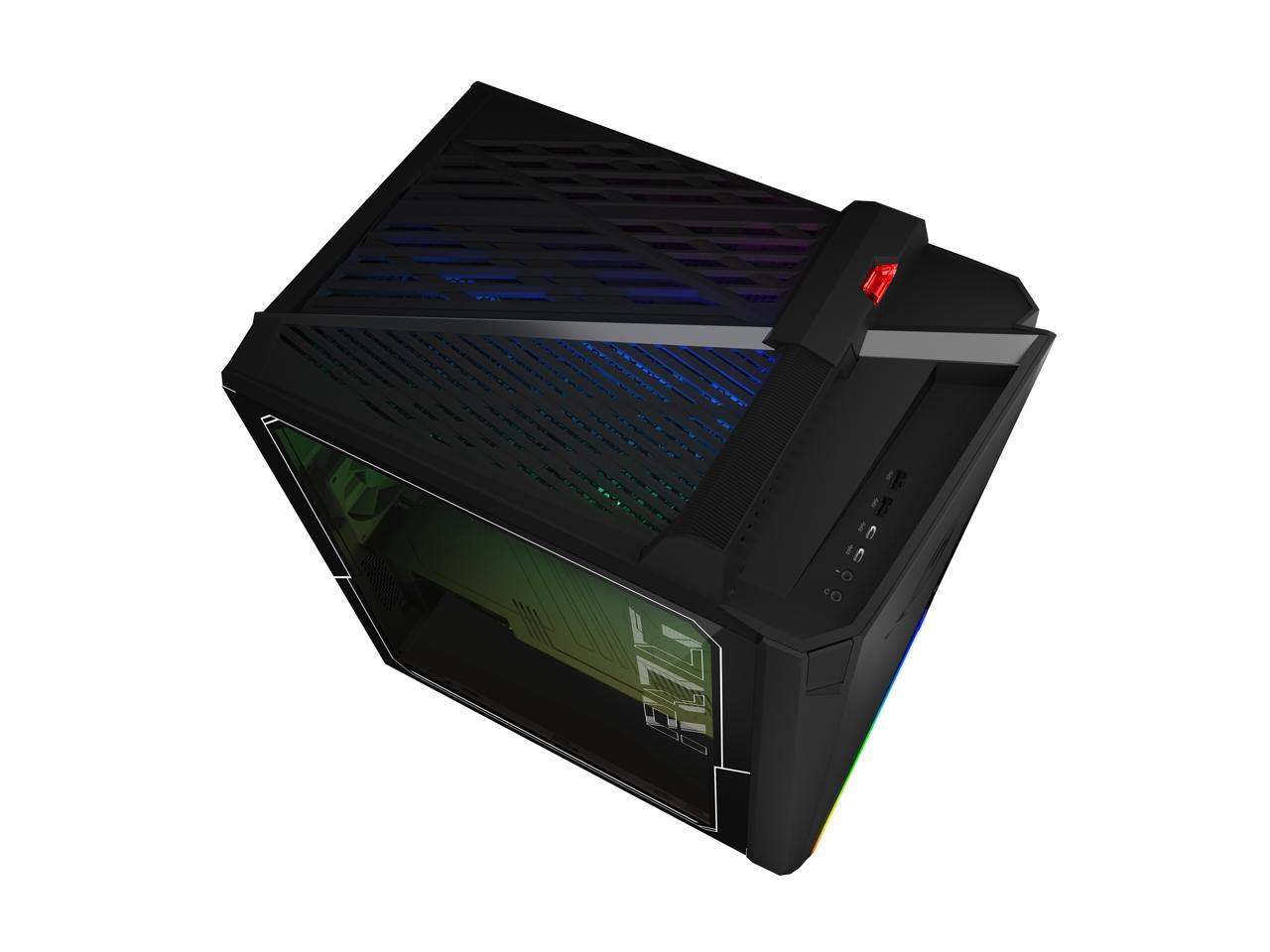 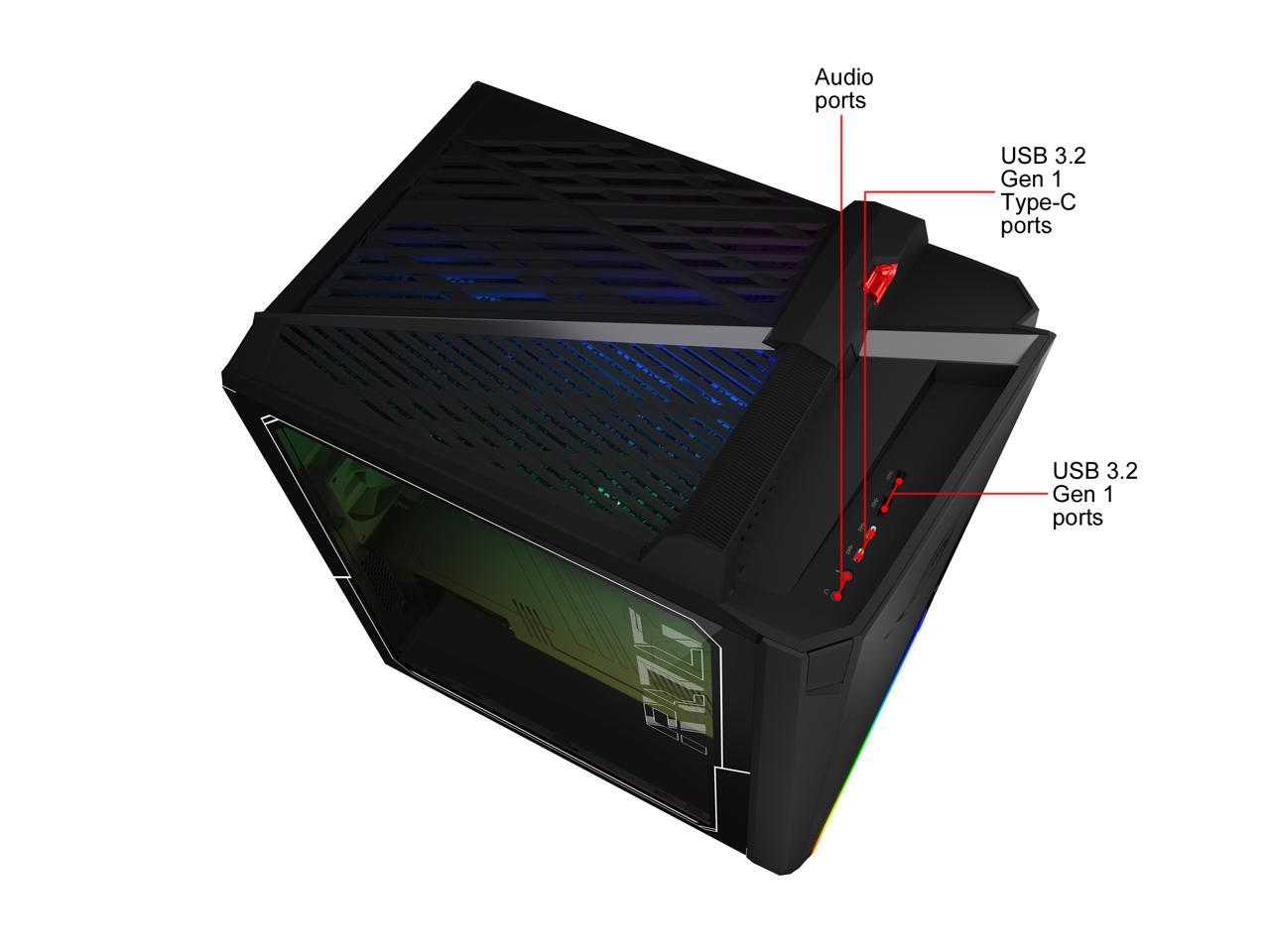 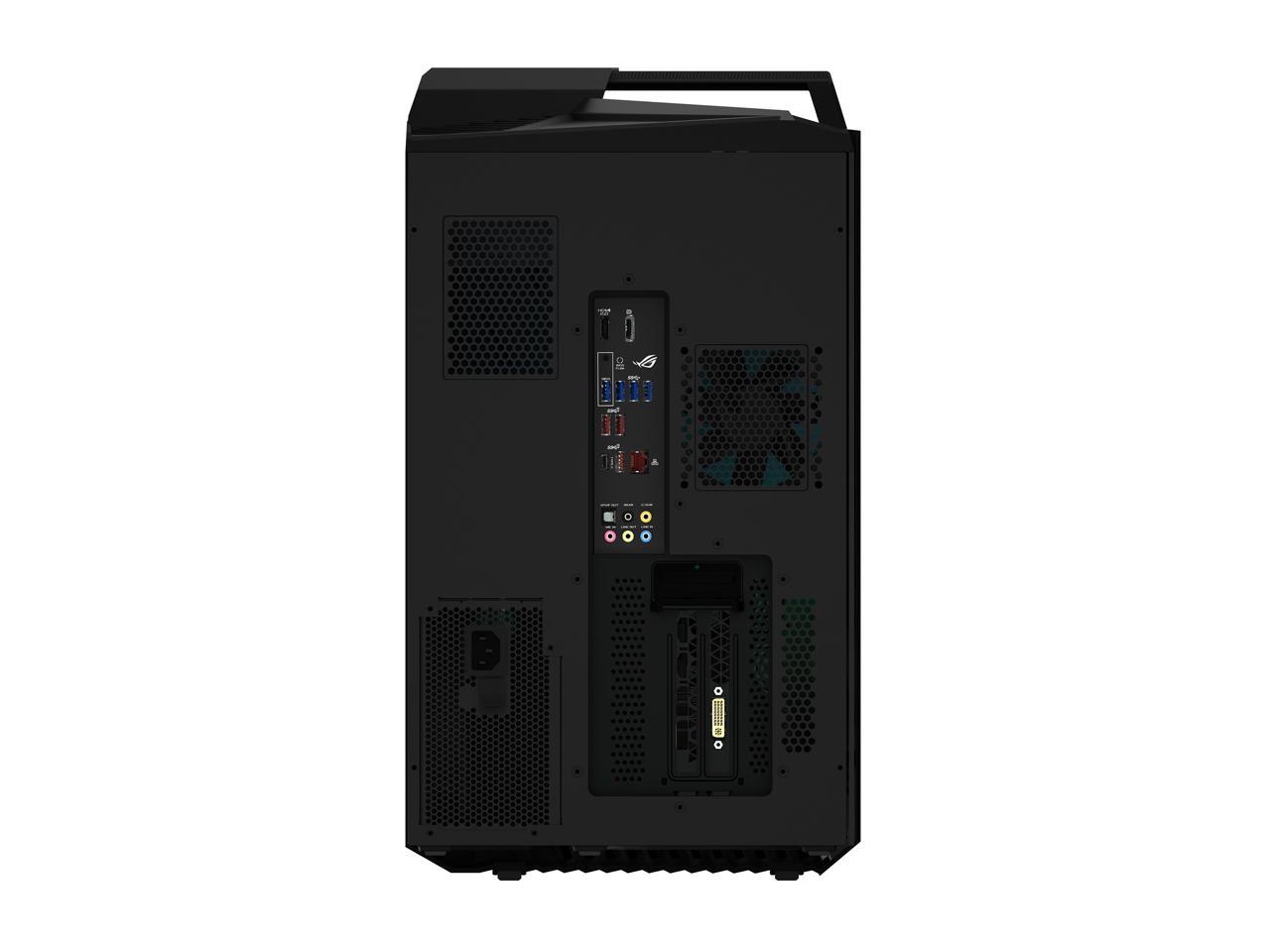 Learn more about the ASUS GA35DX-XS99X

Pros: AMD Ryzen 3950X processor= 16 cores 3.5 GHz. Multi-processing powerhouse. NVidia GeForce RX 2080 TI=top-of-the-line graphics chipset to tear thru latest games. Combine those two together and you have a machine that can handle just about anything in the foreseeable future. The case is a bit odd because it almost as wide as it is tall. With the case upright you have the PSU and expandable hard drive bay slots on the left, the motherboard as a vertical divider, and the graphic card and PCI slot devices on the right. Seems like kind of a strange layout from your standard ATX Mid-tower, but it works because the airflow in the case has more space than a full-tower. The graphic card has some PCI extension from the motherboard where it sits parallel to the motherboard instead of plugging perpendicularly directly into the slot. Another unusual configuration but it works. The case also has this handle at the top that makes it easy to move around, but one you find out right place to put it you are not going to want to move it ever again. The machine boots quickly and has no problem handling whatever I throw at it. I am running DOOM Eternal with max graphics and have not had any issues or slowdown. Have not overclocked nor reconfigured the core loadout from its standard stock setup.

Cons: Components are packed tight in this case and trying to access them to remove/replace are difficult. I wanted to get specific model numbers for the motherboard, graphic card and SSD but the layout of components makes it impossible to get to them without taking apart everything in that case. There is also a shield/guard to separate the video card from the other components its position cut across the lower quarter of the memory DDR slots. The problem is that if you want to expand or replace the memory you have to make sure you get memory sticks whose height will not conflict with the shield/guard. Memory sticks have these heat sink/radiator designs to help dissipate the heat but make them unique, which unfortunately may also make them too tall with that shield/guard in place. Upon first booting up the fans will be very loud as they spin very fast, but by the time BIOS has loaded and a windows login prompt show up the fans have slowed and things are quiet again. Upon first receiving my PC I could hear something rattling around in the case. After removing the side panel and putting the case on its side, a screw and wire harness zip tie came tumbling out. I have not found where the screw goes but so far no impact on performance, so I will not sweat it. I am concerned that either of these could have jammed a case fan or graphics card fan, or the screw could have shorted out a critical component but I caught before my first boot up, so crisis averted. Update as of Aug 2020 There is a service called ASUS Armoury Crate that supposed to "customize RGB lighting and effects for every compatible device in your arsenal and synchronize them with Aura Sync for unified system lighting effects". However after I ran an ASUS update this Armoury Crate program keeps trying to install itself upon every boot-up/restart. It is annoying to see a pop-up window show up saying its installing and never finishes. I just close the pop-up, but it will show upon the next launch. Tried to remove from startup taskbar but could not find it,

Overall Review: I would recommend this to anyone who is looking for an AMD pre-build who is hesitant about changing the stock layout. As described before the wide mid-tower case has an unusual layout where the internals are not that accessible except to those who are really committed to modifying it. It is a powerful CPU and graphics card in one package and it can handle anything you throw at it. Get the latest updates (Windows, drivers, BIOS, etc), and I especially recommend downloading the GeForce Experience from the NVidia site to make sure the latest and greatest graphics drivers are loaded. As with all pre-builds you have bloatware already pre-installed but you can remove them without too much hassle. It does come with USB gaming keyboard and mouse where the keyboard needs two USB slots to plug in, but that is only because the mouse plugs into the keyboard. Both keyboard and mouse have a heavy durable feel to them, and the keyboard has a scroll wheel in the upper left corner that will allow you to adjust volume control. Give me a couple more months and I will give another performance review on how things have held up since then. Update as of Aug 2020 I replaced the 2x16 GB memory with 4x32 GB (G.SKILL Ripjaws V Series 128GB (4 x 32GB) 288-Pin DDR4 SDRAM DDR4 3200 (PC4 25600)) = 128 GB memory total. I see a significant improvement in performance. I just wish I could have gotten the speed specs on the stock memory before I replaced them.

Cons: - Since it’s new, I can’t find any YouTube videos about upgrading this model - Only 1 gpu slot

Overall Review: Quite frankly the main reason I wanted to buy this was because of its processor and the ability to cool said processor. On both of those fronts this desktop exceeds expectations. I did benchmarks testing the cooling power and the with highest settings the system remained cool consistently. Even for three hours playing metro exodus on the highest settings the temperature never reached 70C. I plan to do some work with neural networks sometime in the future and this comes with a great gpu for said work. However if the new rtx 3080 ti is significantly better than the rtx 2080 ti then I’m going to switch video cards. This should be a standard operation. All in all I am happy that I payed for this because with proper maintenance and upkeep this should last me a very long time.

Overall Review: Ive had for a few days. its most powerful pc i have had. great overclocking on ASUS rtx 2080 ti. runs cool as well. expensive

Overall Review: Most pre builds cheap out on a lot of parts and just stick to a flashy graphics card and cpu but with these pre builds I feel like I’m getting what I paid for in every way.