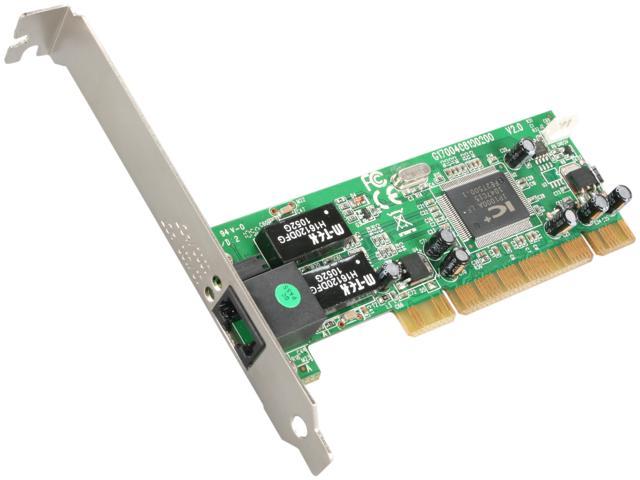 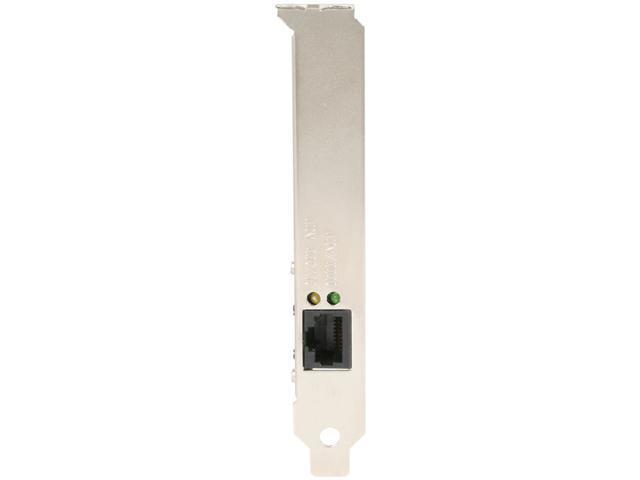 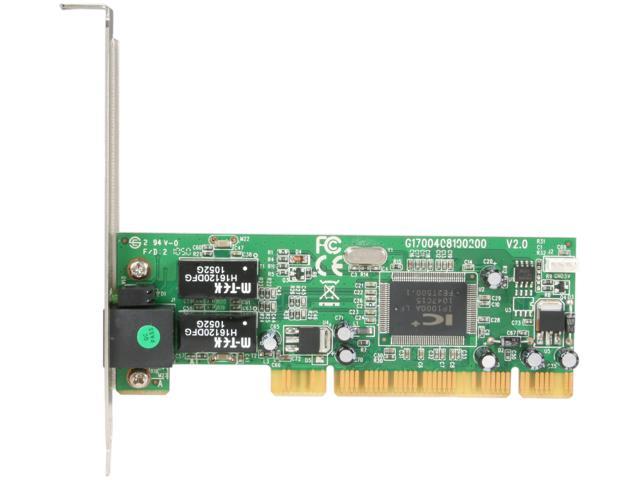 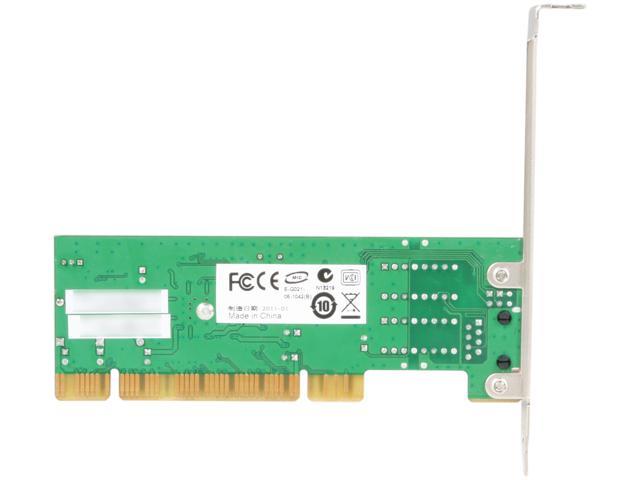 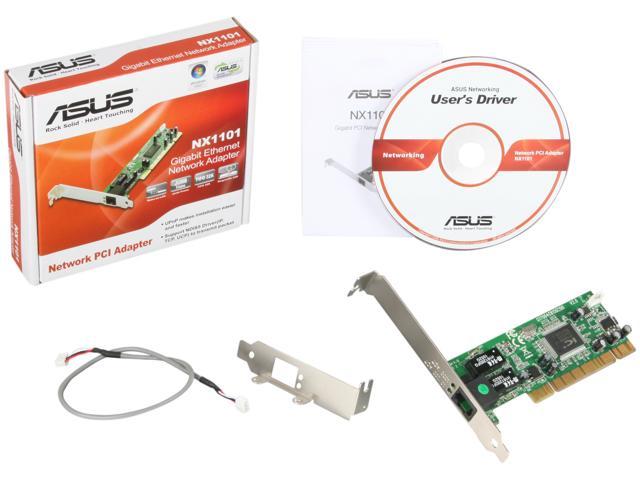 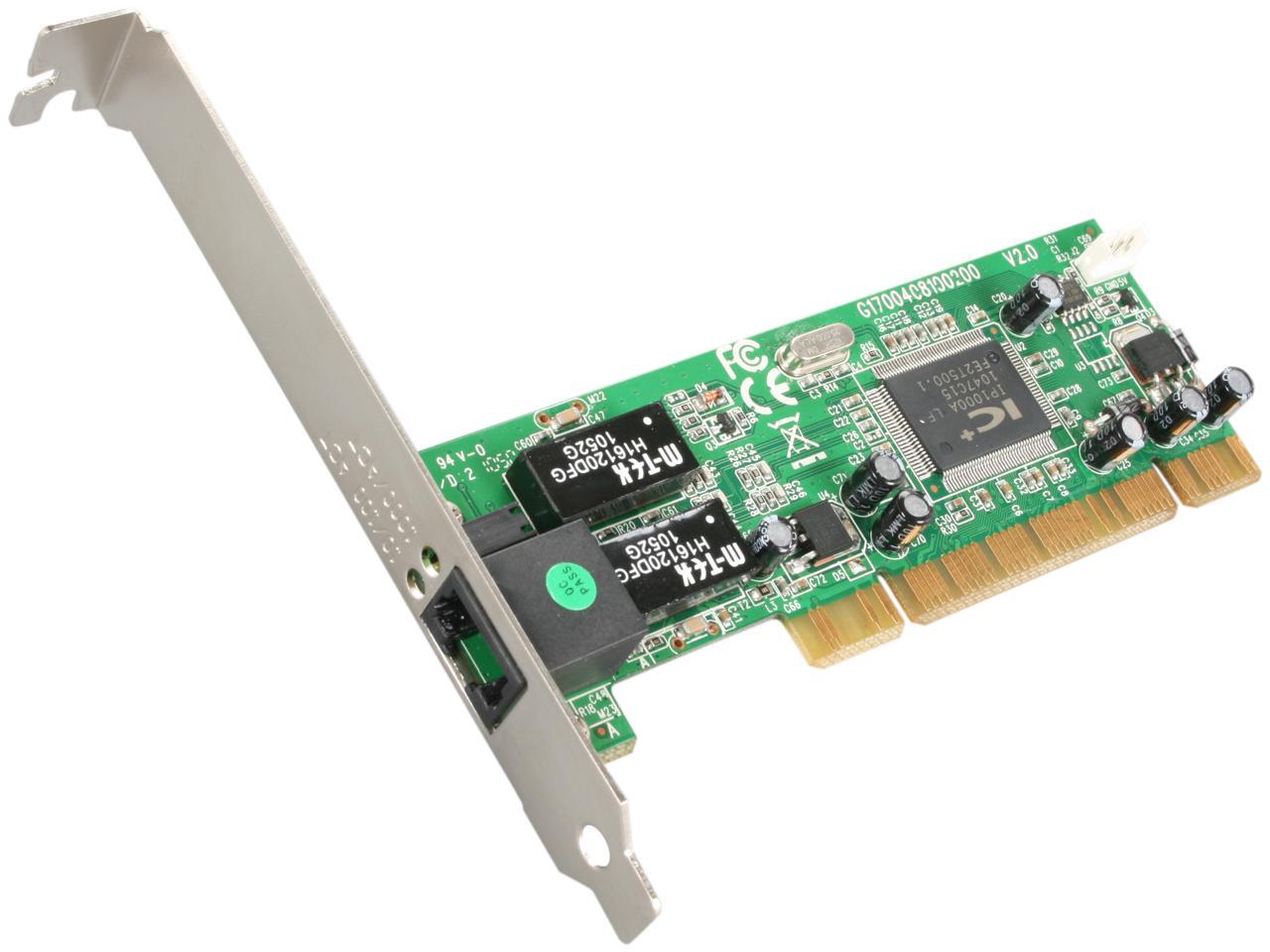 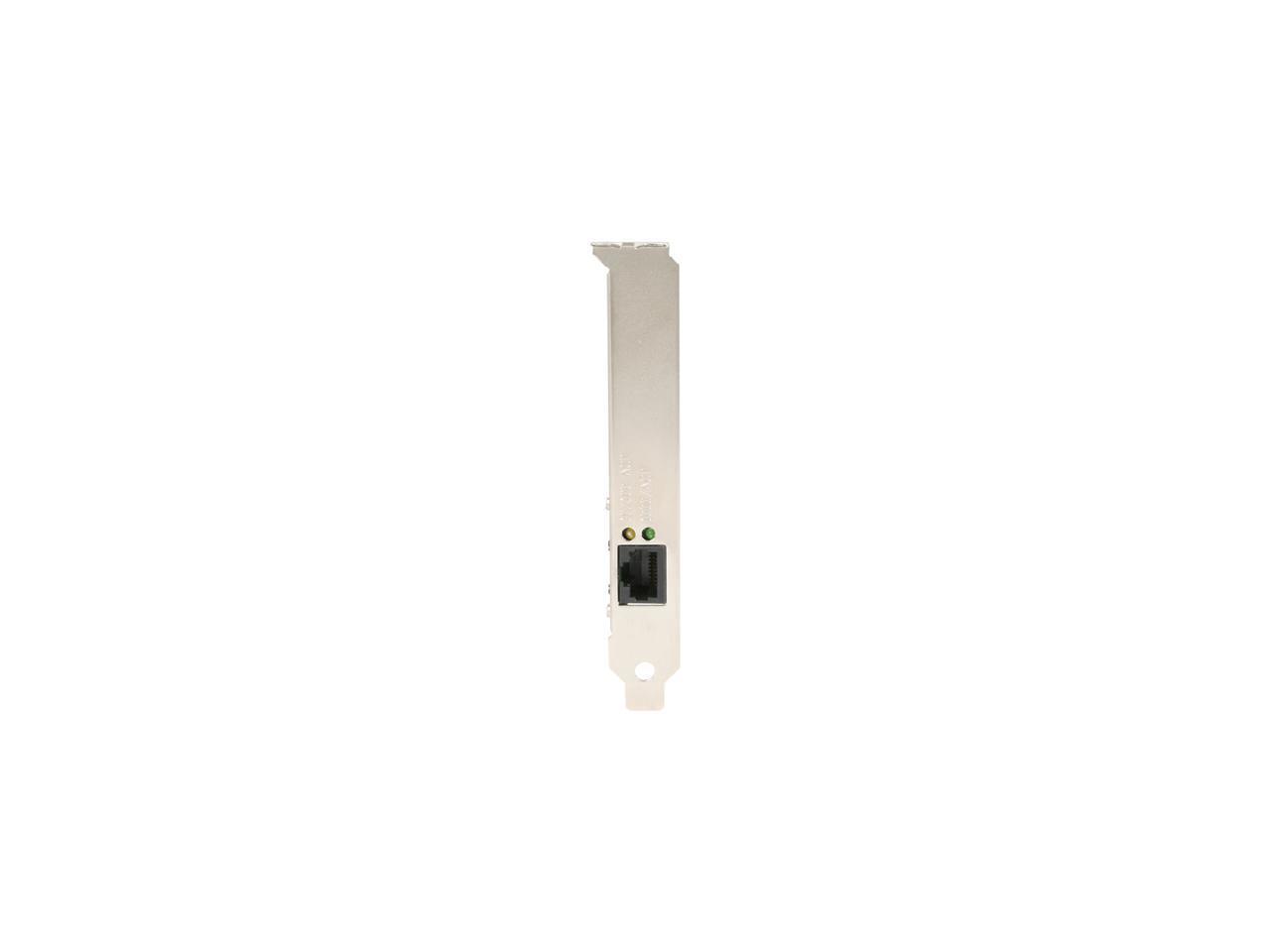 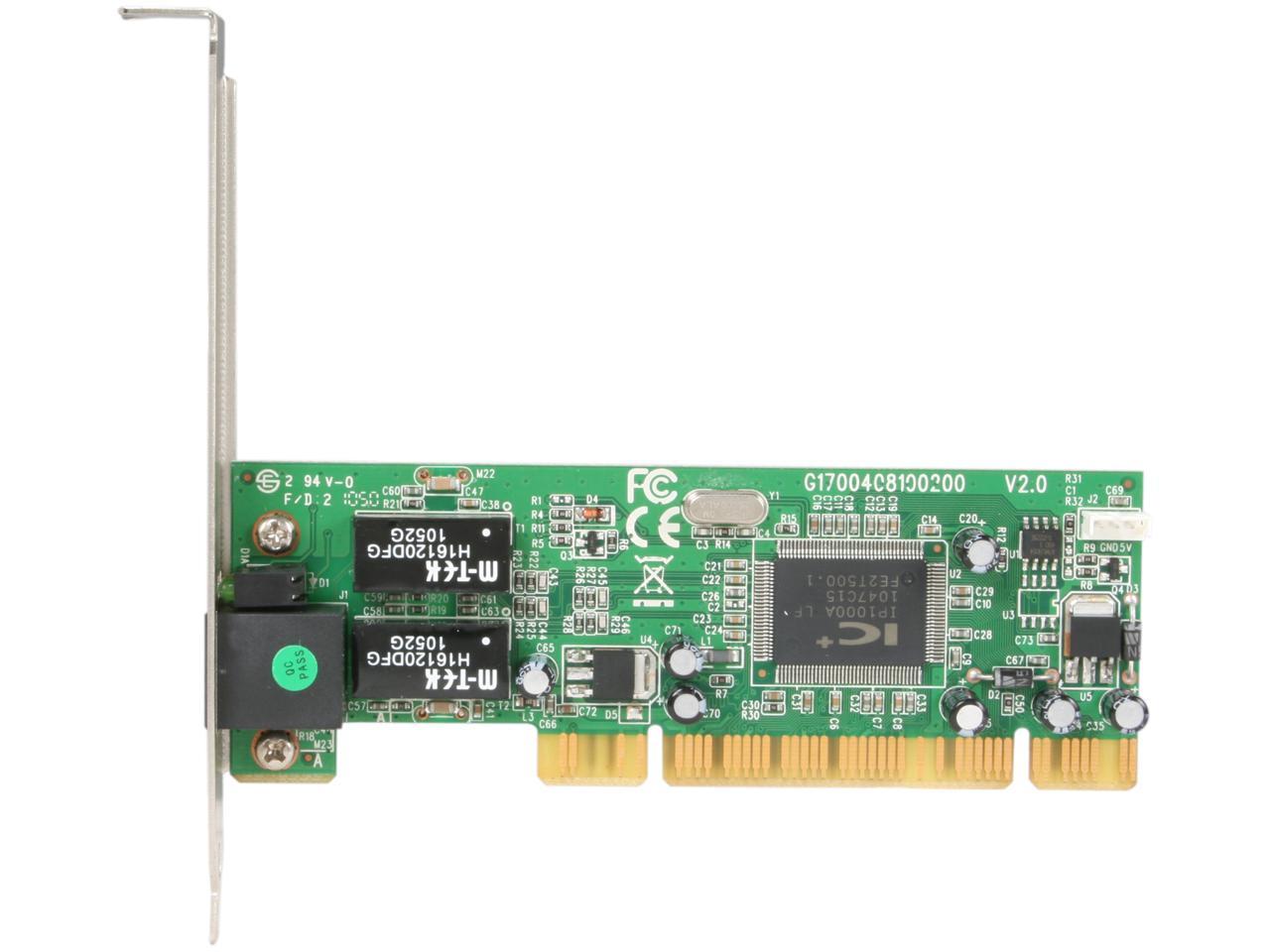 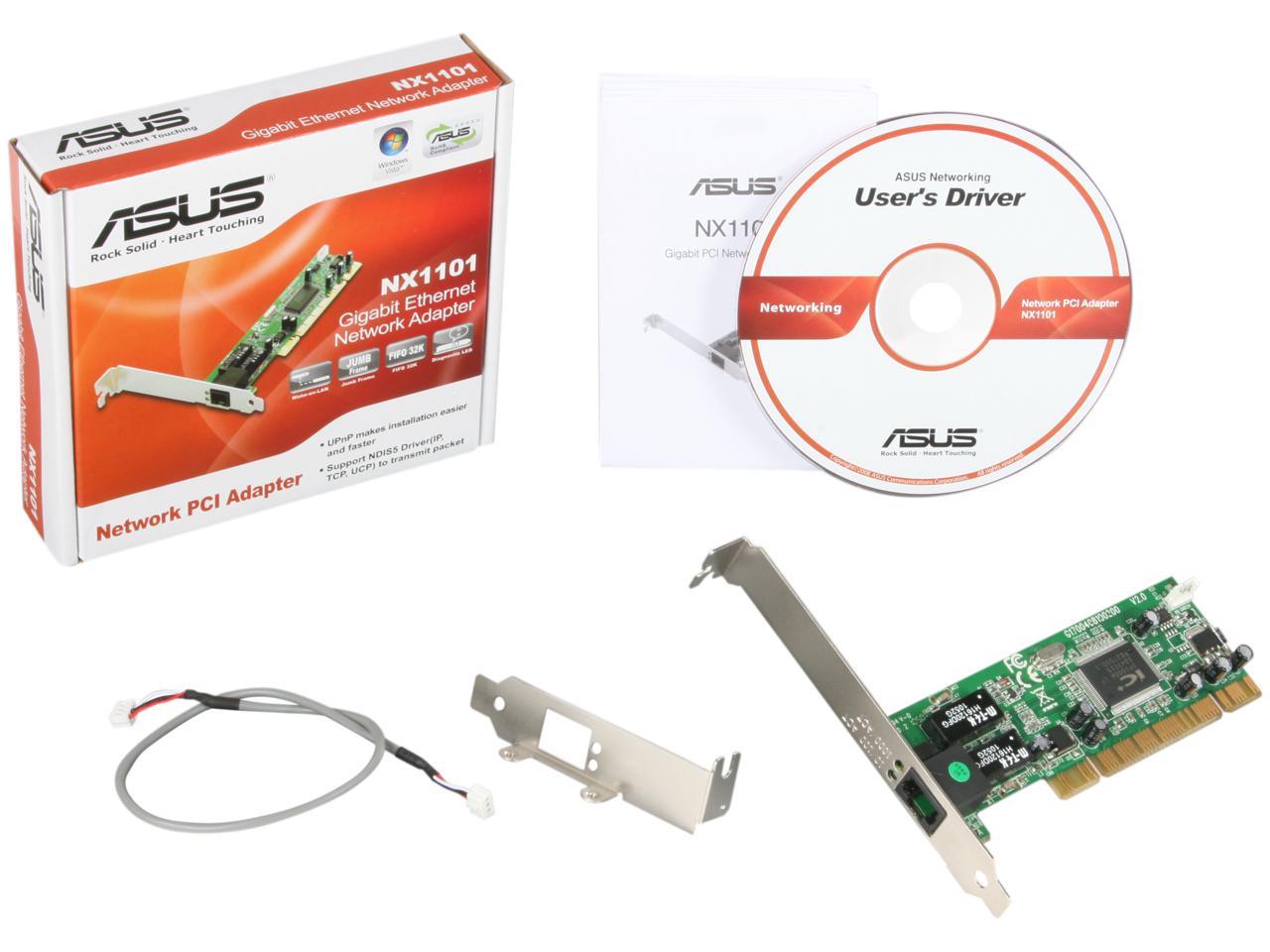 Learn more about the ASUS NX1101

Pros: This item works well, when it works.

Cons: This unit disconnects when the OS (Win 7 x64) goes into sleep mode, does not reconnect coming out of sleep mode until reboot. Must turn off NIC power management to fix. This unit intermittently disconnects from the network, and network diagnostic must be run to reconnect. At 90 days of use, this unit now disconnects during file transfers, and requires reboot to reconnect.

Overall Review: I have used lots of ASUS products, for several years, but this network card has a problem. Drivers have been updated to no avail. ASUS tech support has failed to respond to online tech inquiries and warranty requests.

Pros: Works. My integrated NIC was getting flaky as was my windstream internet. After fighting with ISP tech support and them saying it wasn't on there end I broke down and bought this card. Well, I know KNOW it is on there end, undoubtedly. This card allows me to stream video and audio to and from multiple computers seamlessly. Something a 100MB card just couldn't keep up with. I usually have at least 3 computers accessing files from the computer I installed this in and never have a LAN hiccup. Also, this DOES work with my Linksys Router (E2000) as well as several switches I own (Cisco catalyst...several, 3com superstack...several...cnet el-cheapo, and an old Nortel switch I've got). The previous poster may not be used to network configuration to that extent or something of the like, I'm not one to criticise others when I'm un-aware of their situation.

Cons: Drivers are a bit odd. Windows 7 Pro x64 doesn't automatically find drivers for this card so you need to manually direct the "Hardware wizard" to the CD directory. No big deal there. Windows automatically detects it as an NIC and CAN use it at 10/100 but that defeats the purpose I bought it for...I wanted Gigabit. One thing to note, however, If you are expecting to get transfers of 1000mbp/s, take note that such speeds are not possible on a PCI bus. The maximum transfer for the PCI bus is around 233mbp/s. This is no fault of the card, it is purely the interface on the board. Just be aware that you will never see anywhere near the gigabit speeds this card "supports" because of the interface you are using.

Overall Review: My router displays that this card IS connected at 1Gigabit, (It has a Green NIC activity light on the router, not the standard blue common for 10/100) Several switches also indicated 1Gbit so it DOES offer as much as the PCI slot will give it. I do notice hesitation when I am streaming media (.avi's and .mkv's especially) to 2 or more machines, but that is very minor and doesn't really impact the playback. I only have 1.5TB of space on the machine this is used in so streaming through this card isn't absolutely necessary. I have not attempted to use it in my media server though...no need to even try, but I imagine it would fail to stream the content necessary. (8+ TB of storage, so that one is accessed the most to watch video from HTPC and other machines that are used to watch/entertain) Note: All my drives are mapped locally so that is why there are fewer problems. These machines are not set up on a domain and then media accessed. Well, deliberately setup on a domain.

Pros: Works as intended. Get very solid speeds off of my network. Did not use the Asus drives just let Windows 8 install there's. Able to stream media across my network just fine with the card as well. Purchases this to replace the on board Asus one went out on my motherboard.

Overall Review: Seems like a lot of others havee issues with this card but I have yet to see any of these after two months of owning it at this time.

Pros: Great for browsing the internet and downloading things. No driver needed in Windows. It's just Plug-and-Play. I got the same 40 download, 20 upload speeds that my motherboard's built-in NIC gave me. Is able to stream 1080p from YouTube easily, assuming YouTube isn't having any trouble at the time.

Cons: The Mac OS X driver off of Asus' website doesn't work very well. It takes OS X about 30 seconds before I can browse the internet using that card. The card doesn't work well for gaming. It gives good pings, but I kept being teleported around in maps, regardless of which game and which server I played in. I'm not sure if this is the card's fault or a simple fact of the PCI bus. PCI can't send and receive data at the same time. It has to very rapidly take turns switching between those 2 actions.

Overall Review: I bought this card because my motherboard's built-in NIC died. I can't say anything about how long this card lasts because I've only owned it about 4 days.

Overall Review: I've purchased several of these because ASUS is a trusted brand that I sell. This is a terrible ASUS product. The first one I installed keeps disconnecting and I have to constantly reset the network adapter to get it working again. It cuts out every time the computer sleeps. After hours wasted looking, there is no real driver support to fix this problem.

Pros: it's the only gigabit network card I use. Easy install and great product for the money

Cons: Dropped connection have to install drivers before it will connect at all.

Overall Review: It has been dropping the connection whenever I am doing intense transfers. Its weird, windows 7 detects the connection is lost, but is unable to repair it. To fix this issue, all I have to do is go to Control Panel>>Network and Internet>>Network Connections and disable the connection. Immediately re-enable it and it takes off like a shot. This is a major pain in the but as it happens every time. At the price I purchased this item at it is not worth returning. I will be getting a more expensive Intel NIC to replace it. My router is a RT-N56U so you wouldn't think there would be any issues there. Plus I have several other computers connected to that router and they don't have any problems (wired or wireless).

Did you find this review helpful?
Manufacturer Response:
Dear gogo809, I am sorry the performance of the NX1101 caused you to replace it wit something else. If you have any questions or concerns with any other Asus product, please contact me at cl-jeremy@asus.com (ref#1043-1023). Thank you. Regards, Jeremy ASUS Customer Loyalty
Erik J.
Ownership: 1 month to 1 year
Verified Owner
Unreliable5/22/2012 7:43:33 PM

Cons: This NIC will not wake from sleep properly unless you disable the computers ability to turn the devise off. It will randomly stop working while the computer is on. You then must either disable then re-enable the NIC in device manager or restart you computer. updating the drivers did nothing to help with the poor reliability.

Did you find this review helpful?
Manufacturer Response:
Dear Erik, I am sorry you are not satisfied with your NX1101, but if you would like to troubleshoot I'd be more than happy to help. Please contact me at cl-jeremy@asus.com (ref#1043-1018) if you have any questions. Thanks. Regards, Jeremy ASUS Customer Loyalty