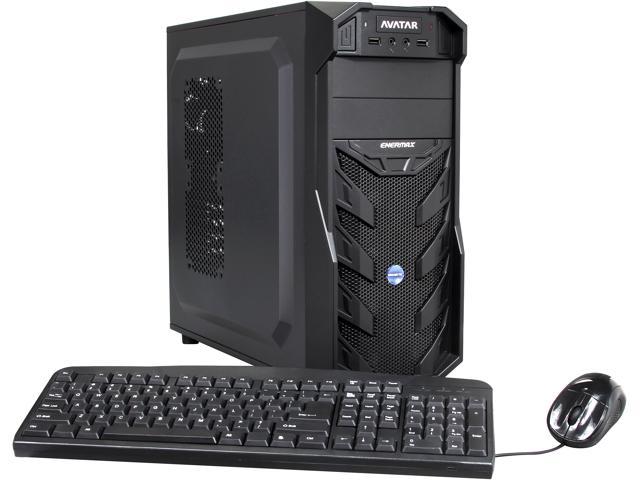 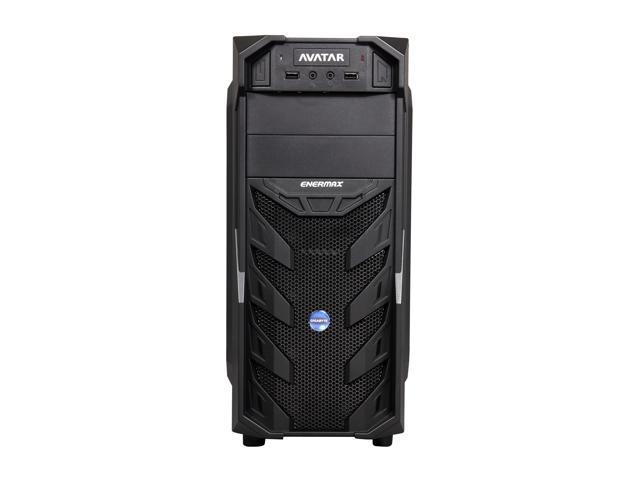 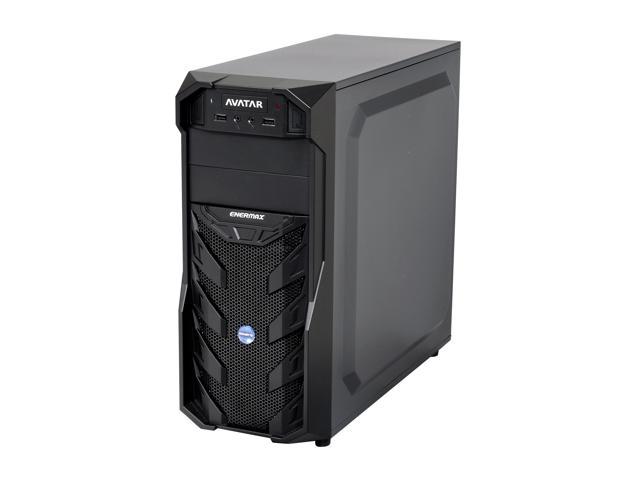 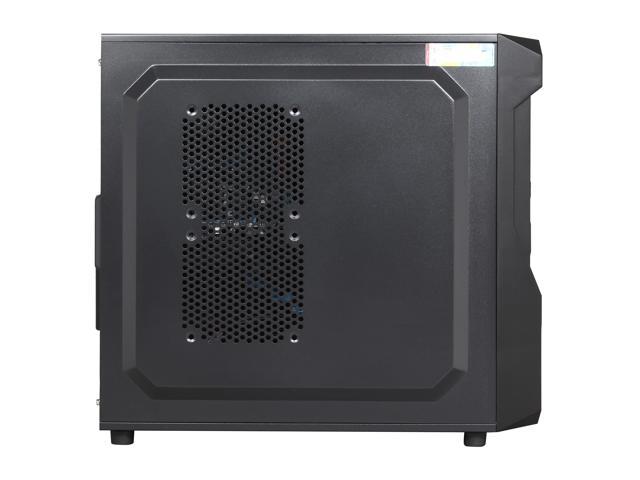 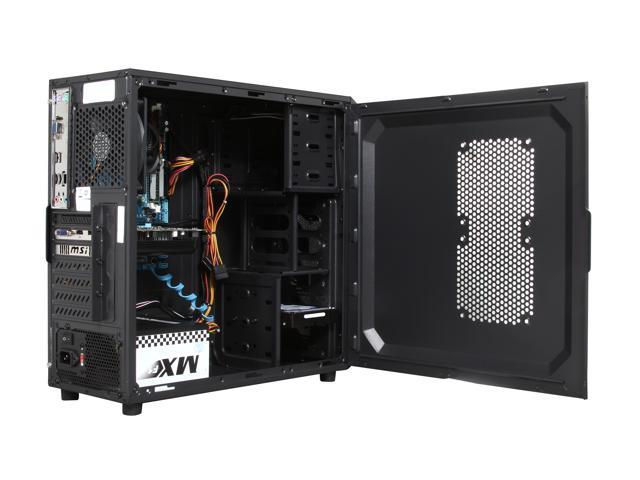 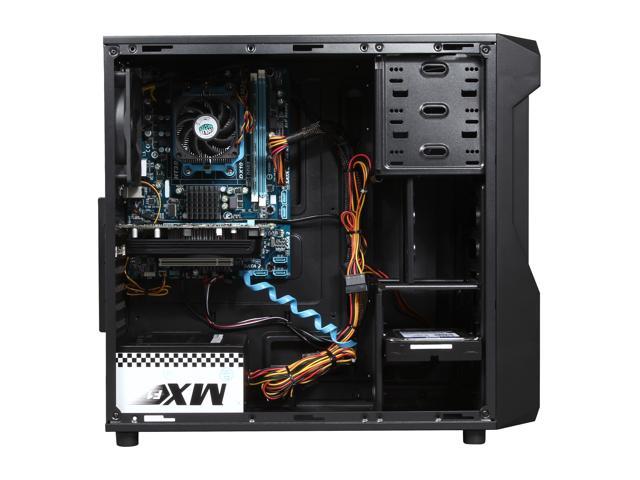 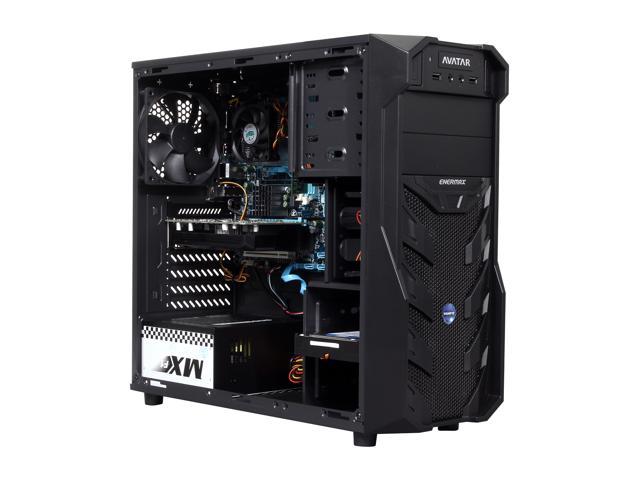 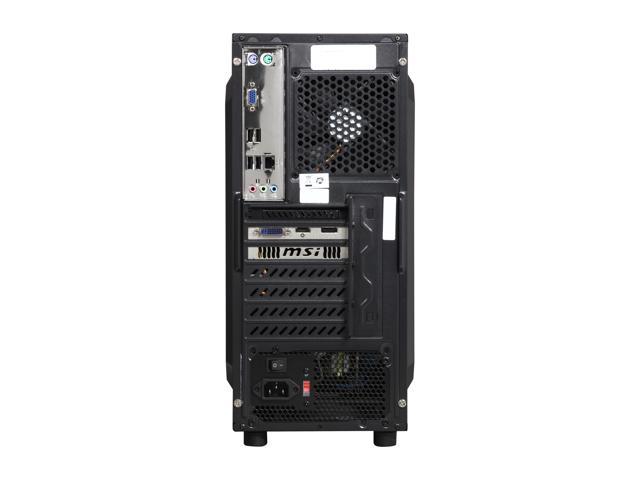 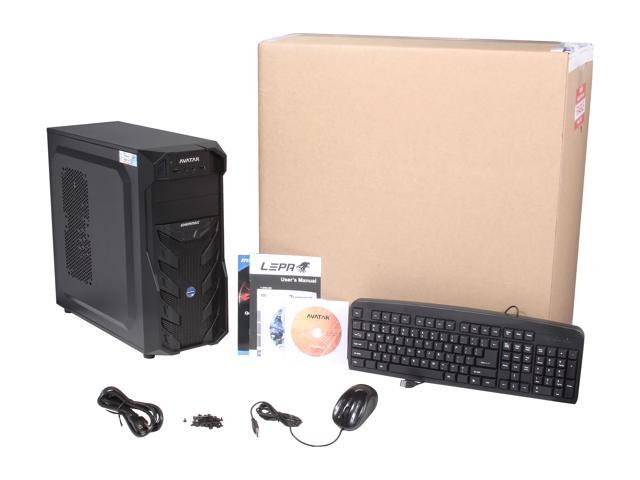 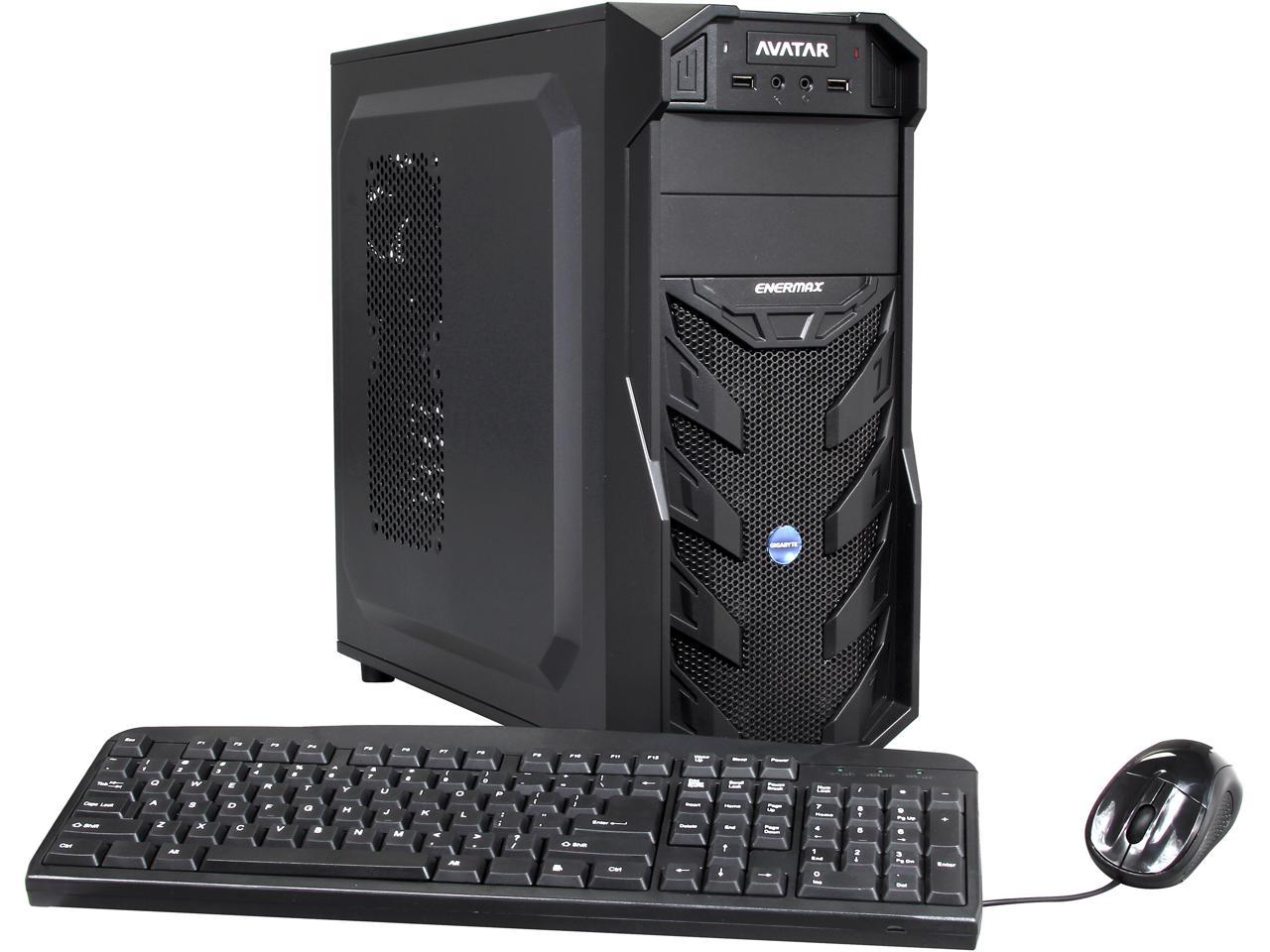 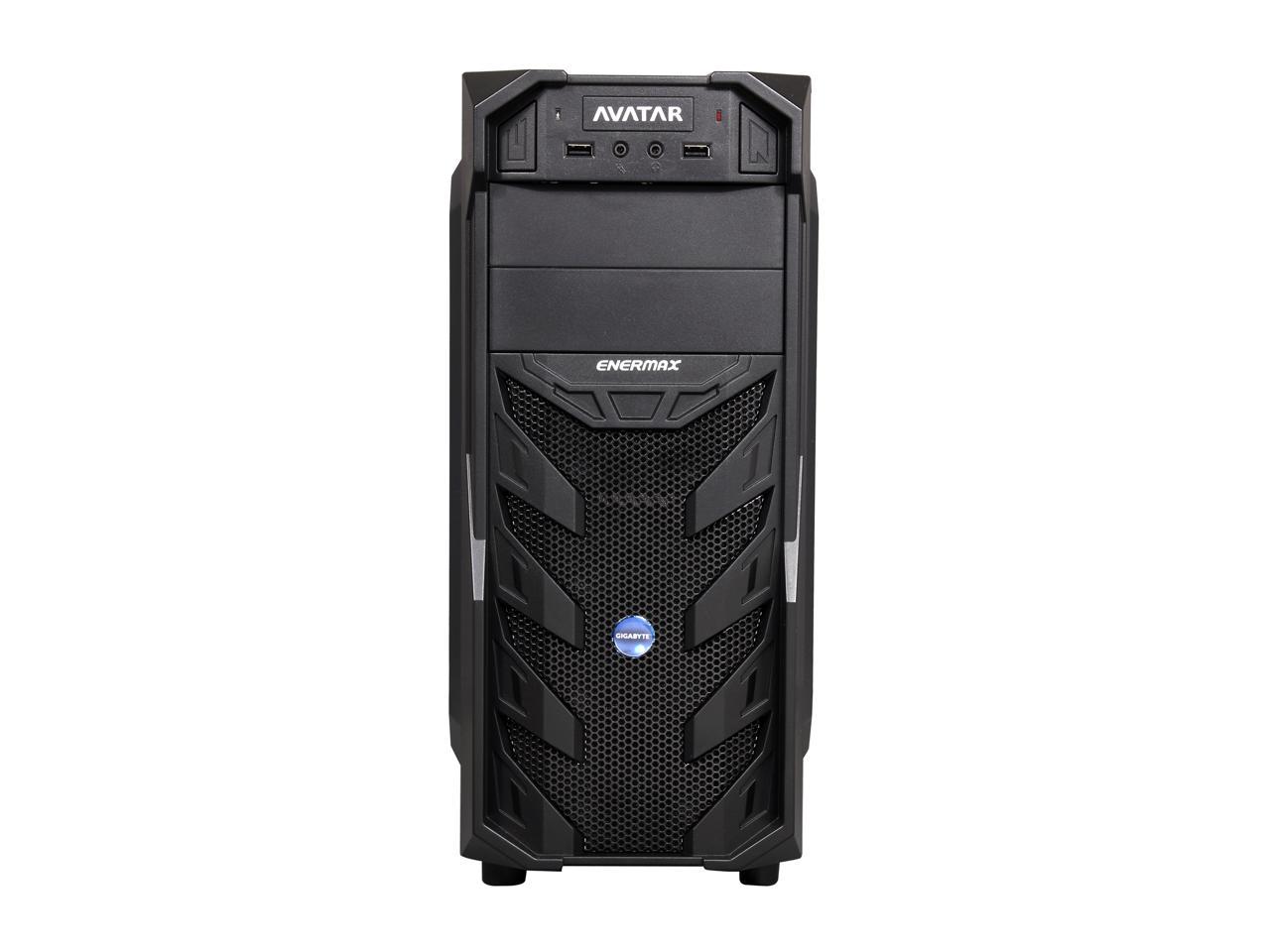 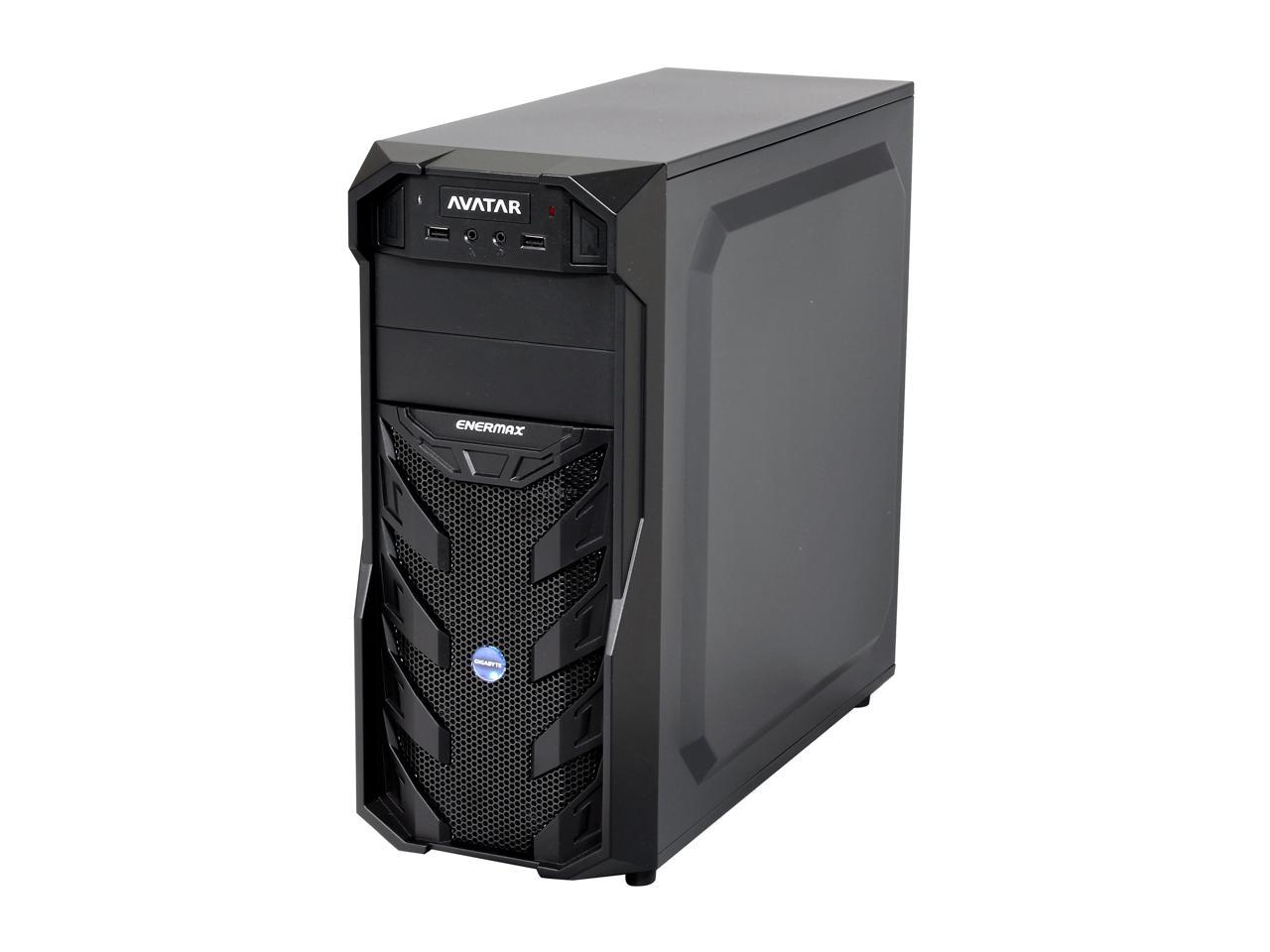 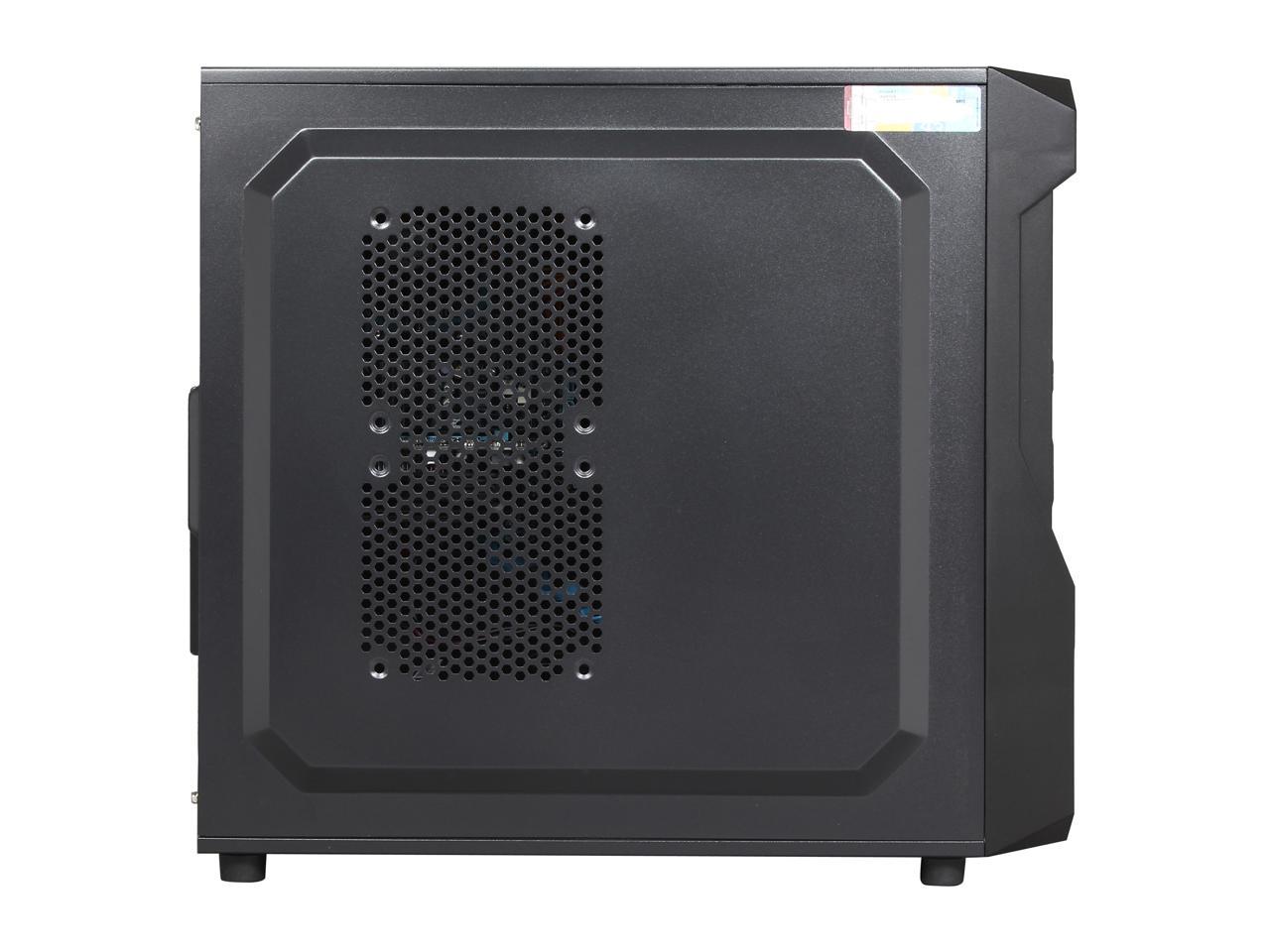 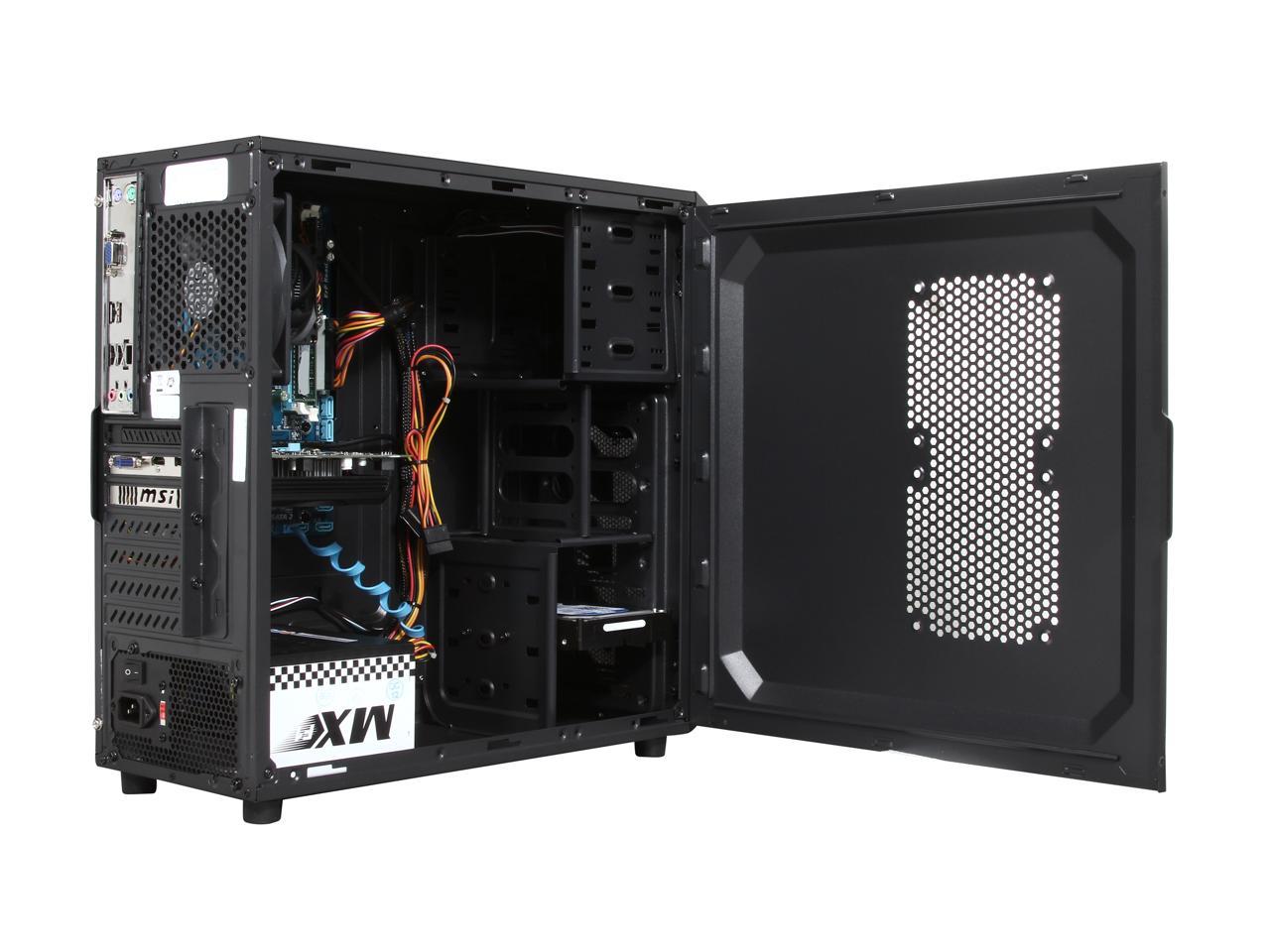 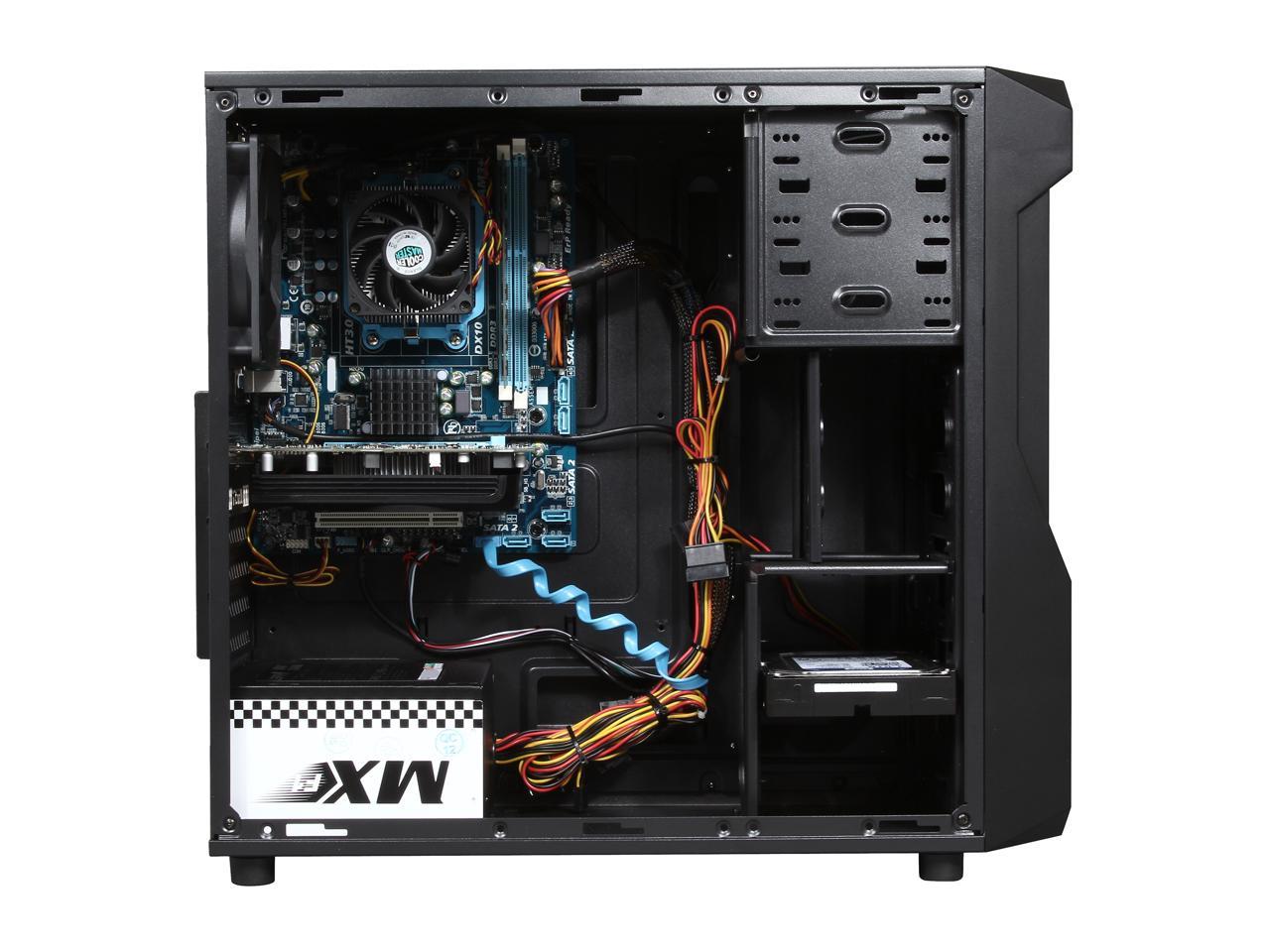 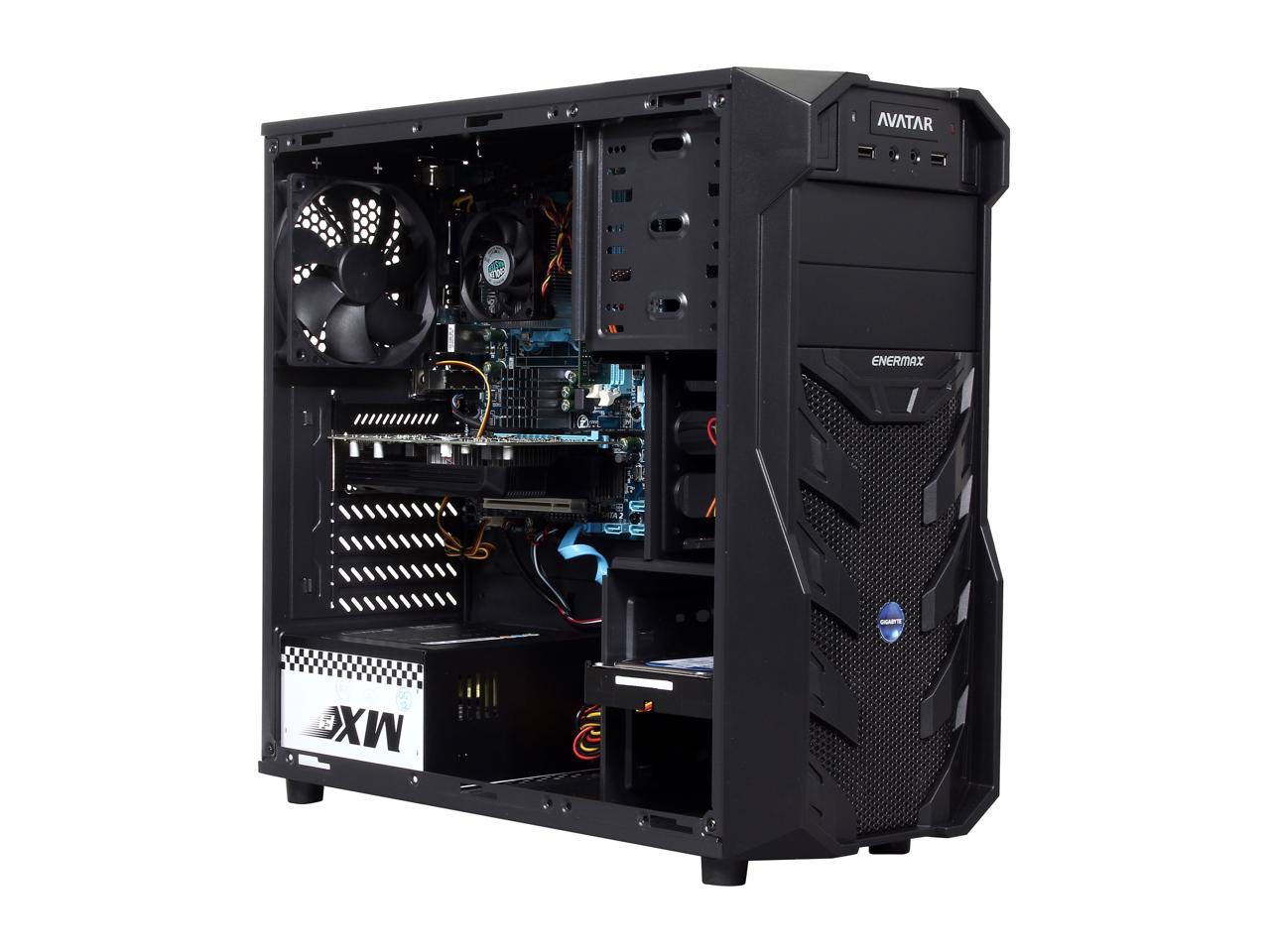 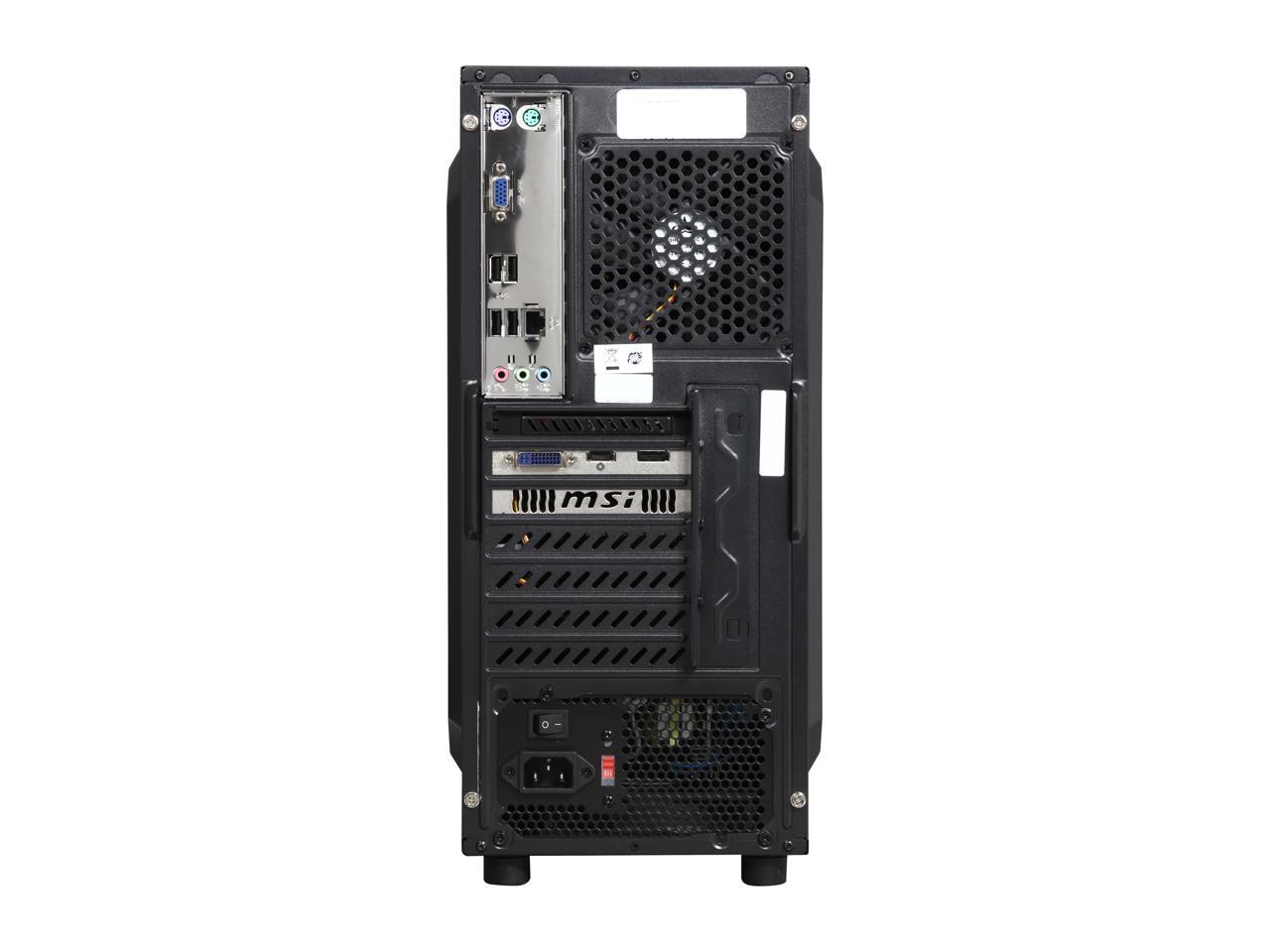 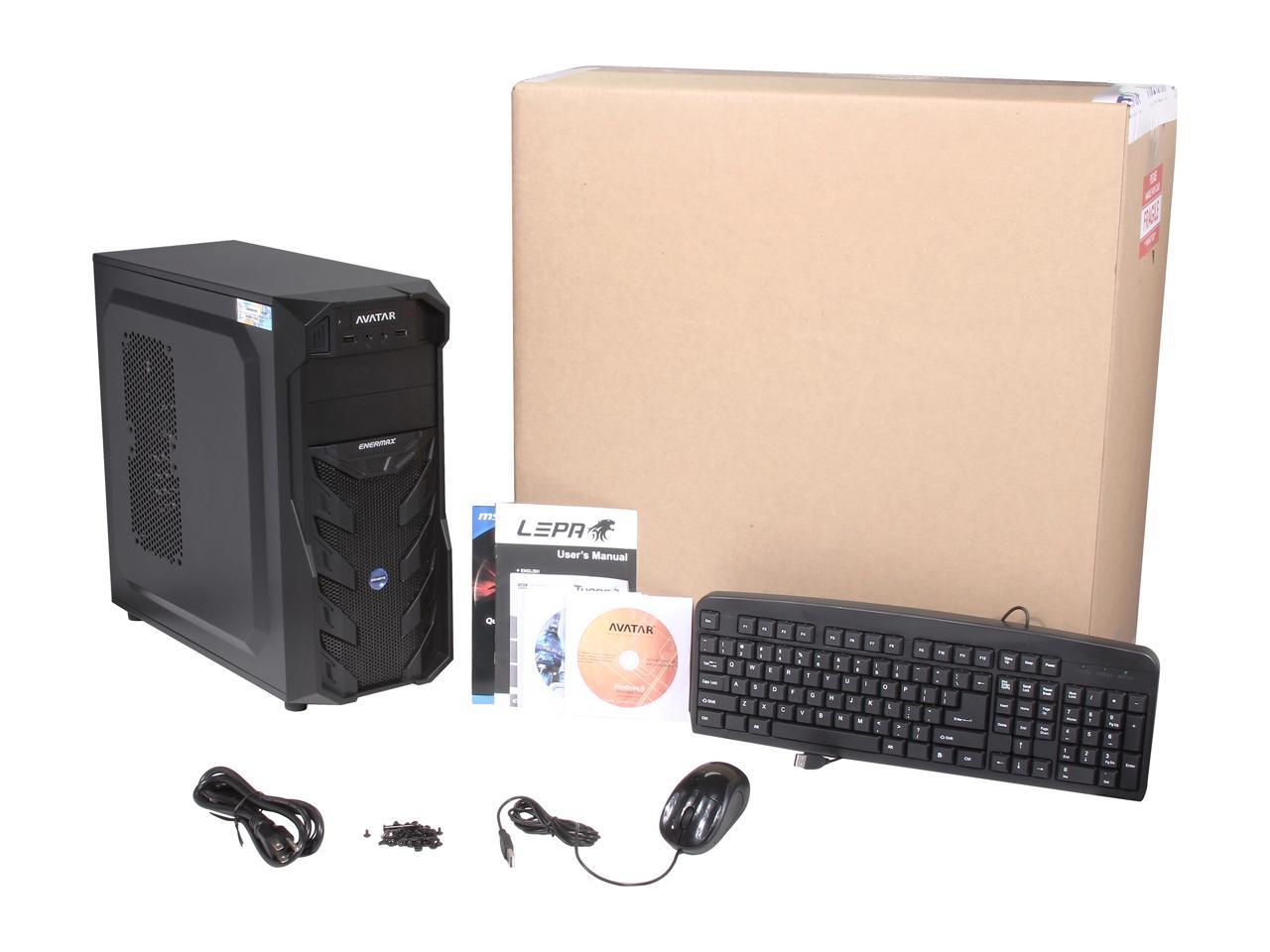 Pros: you can run skyrim on high with light texture mods and climates of tamerial but NO ENB! this though i have to say this is defiantly worth the money.. if your looking to just get your self started into pc gaming. but when we tried bf4 it was like 40-50 frames on low settings.

Cons: none really its exactly what i expected and my girlfriend is uber happy.

Overall Review: this is the perfect computer for sombody who is looking into staring there own rig the processor boosts itself to 4.0 and scored a little under an average gaming laptop on 3d mark 11 in performance setttings (720). if your looking to upgrade i recomend geting a new case and power supply the one provided is realy only good for the components it currently houses.

Pros: A great entry level pc for gamers new to pc gaming or on a budget.This pc can run most games on medium to ultra graphics. It runs very smoothly with little to no lag. Would definitely recommend it.

Cons: My only problem was that it did not include an optical drive or wifi adapter.

Overall Review: I think it a great value and would recommend it to anyone.

Cons: Has a metal lip right over the HDMI output which makes the cable impossible to plug in securely; power supply failing after 1 year; has had spontaneous shutdowns even before the PS started failing; Came without a dvd/cd drive, although this was easy to install

Overall Review: Would not but a computer from this manufacturer again

Pros: It actually arrived at my house, which is better than what I can say about some of the other online computer parts retailers.

Cons: Its garbage. First off, within 10 minutes of owning it, it crashed and since it doesn't have a disk drive, I was forced to go buy an external, which was only the first annoyance. I have owned this computer for months now and for the past 2-3 months I've kept track of the BSOD's I've received in this time: SYSTEM_SERVICE_EXCEPTION (x2) BAD_POOL_CALLER PFN_LIST_CORRUPT (X2) NTFS_FILE_SYSTEM (X4) RESOURCE_NOT_OWNED MEMORY_MANAGEMENT (X4) IRQL_NOT_LESS_OR_EQUAL SYSTEM_THREAD_EXTENSION_NOT_HANDLED CACHE_MANAGER PAGE_FAULT_IN_NONPAGED_AREA (X6) KERNAL_SECURITY_CHECK_FAILURE (X3) BAD_POOL_HEADER (X4) DRIVER_CORRUPTED_EXPOOL SYSTEM_SERVICE_EXCEPTION (X2)

Overall Review: Avatar is also quite useless. I contacted them several times at the beginning. They didn't understand the concept that the computer comes without a disk drive, but the recovery media is a disk. So, when the computer crashes within the first 1/2 hour of owning it, and requires the disk, I'm out-of-luck.

Pros: Cheap price for great hardware Able to run 90% of games at max settings Useful for gaming, graphic design and any day to day use Able to keep up with many process heavy tasks Doesn't get hot very much so a lot less effort from fans which means a lot less time spent cleaning dust. Case is sturdy and sound.

Cons: No Optical Drive Bad Connections in front audio ports included in case. Was not clear on outputs used but it doesn't use VGA for its primary output. Keyboard and Mouse that comes with are flimsy and cheap but luckily I had some more durable ones beforehand

Overall Review: I purchased this November 2013. I've received a few compliments from it for how good it can keep up. For many years I used numerous desktops, laptops but a lot of the time it was generic computers with dated components, features and operating systems. This however was and still is an awesome PC. You're paying around $500+ so of course you get what you pay for but you're getting a lot more than you would from a laptop or something you'd get from stores. After owning one for close to a year it hasn't shown its age even once, graphics and video look great. It's also a great first gaming PC for those wanting to make the switch from console or just wanting to upgrade but not wanting to spend too much money.

Pros: This can handle everygame i throw at it including BF4, arma 3,and even arma 2 dayz mod.

Cons: None really. Except i didnt get a mouse and keyboard with it

Overall Review: I Found out they gave me a AMD Radeon 7750 instead of the 7730 i cant really complain its a better card :)

Pros: No frills FAST. Price for performance is very good. We have 6 of them and have not had any show stopper issues with any.

Cons: Keyboard is small and hard to type on if you switch from another one. The mouse is also tiny, light, and not very comfortable. No speaker. No DVD.

Overall Review: Overall we like them. For the price I am definately satisfied.

Pros: - Great specs for the price - Comes with back up disc for Windows 8.1 - Cables are neatly tied together within the tower.

Overall Review: The computer would not remain on the first time I attempted to start it. It immediately blue screened after it shut down the first time. I had to install the Windows 8.1 to repair it but there was no disc drive to do so. I had to install the disc driver (part taken from another computer) in order to install Windows. After this the computer kept shutting down. According to the BIOS, the system was not detecting the processor fan because the fan for the processor was not working. I had to buy the part in order to use the computer. This is a good computer and has potential . I recommend getting the Warranty for issues like this. An entire weekend was spent just trying to repair. Not exactly how you want to use your computer upon getting it. I also recommend testing the computer prior to use. There is a 30 day standard policy for Newegg but it would have taken longer for the computer to be replaced which is why I just bought the part. I gave it 3 stars due to my initial experience.