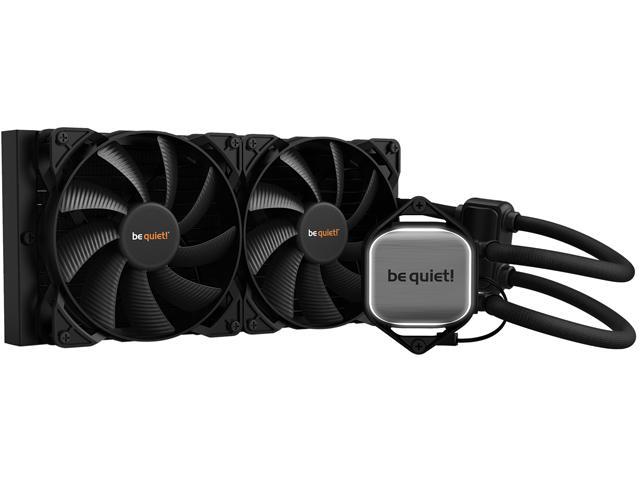 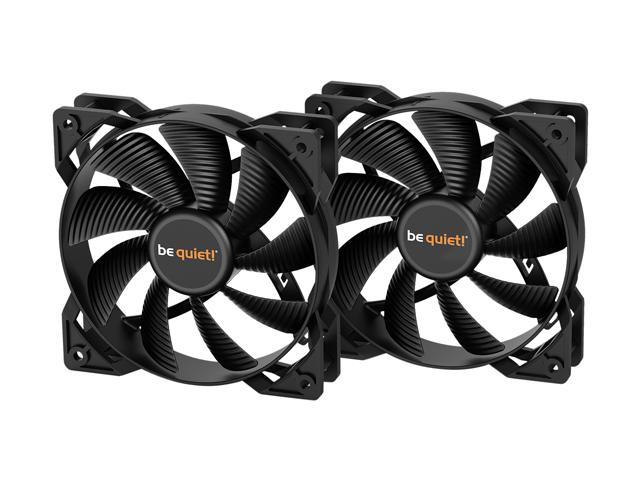 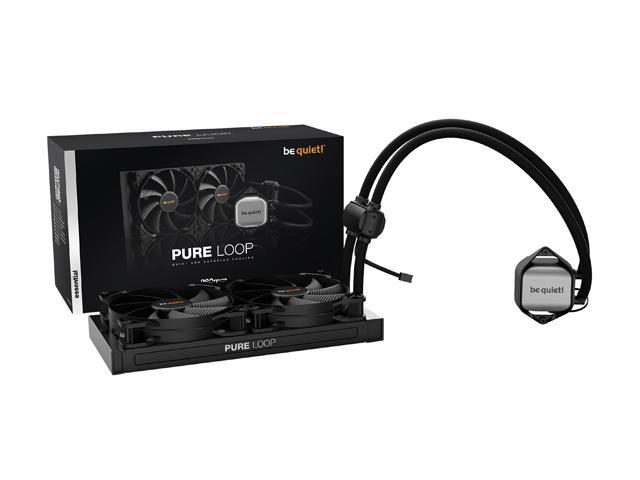 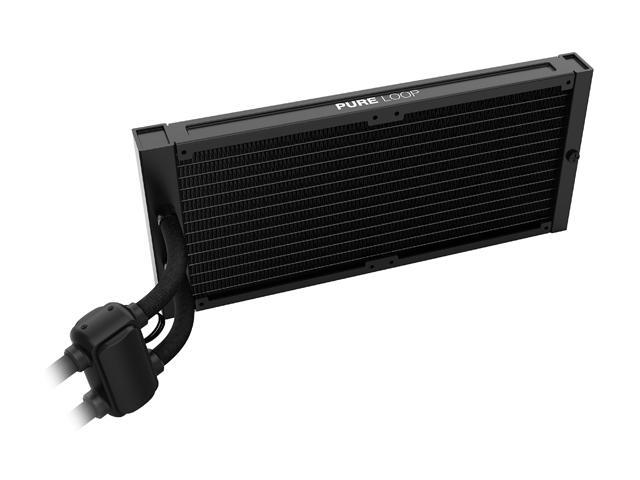 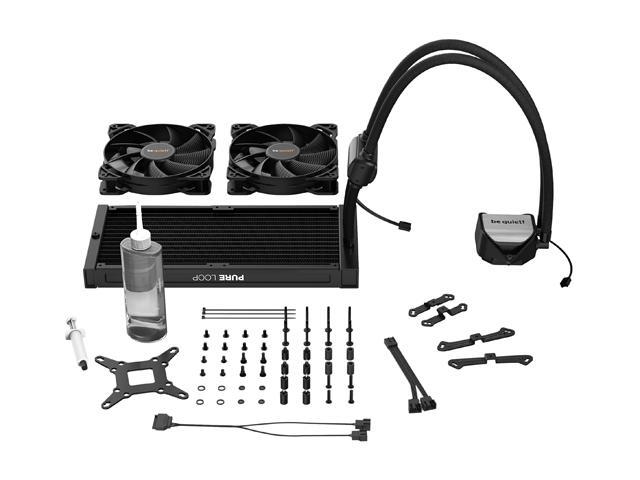 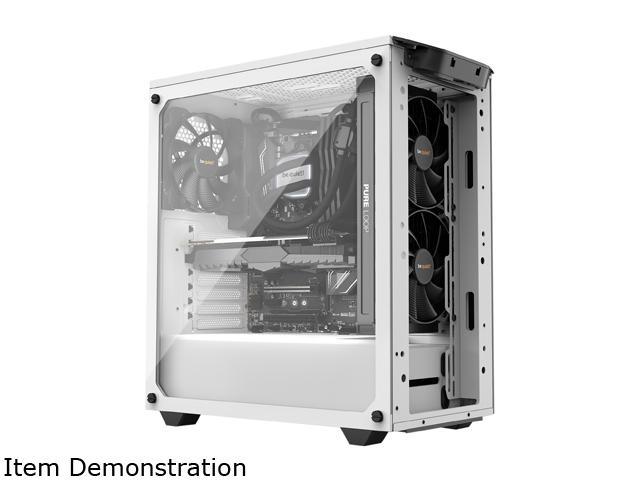 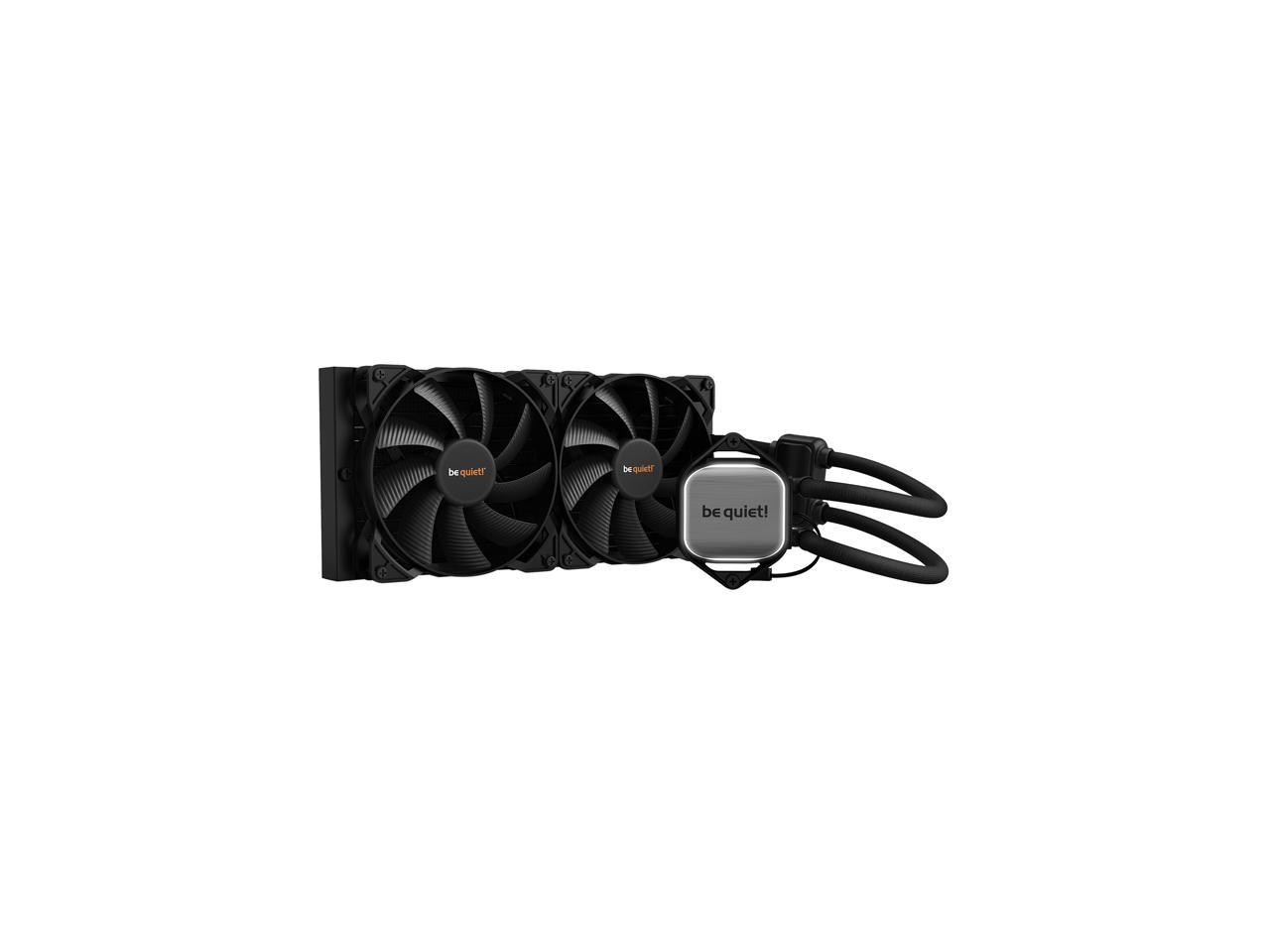 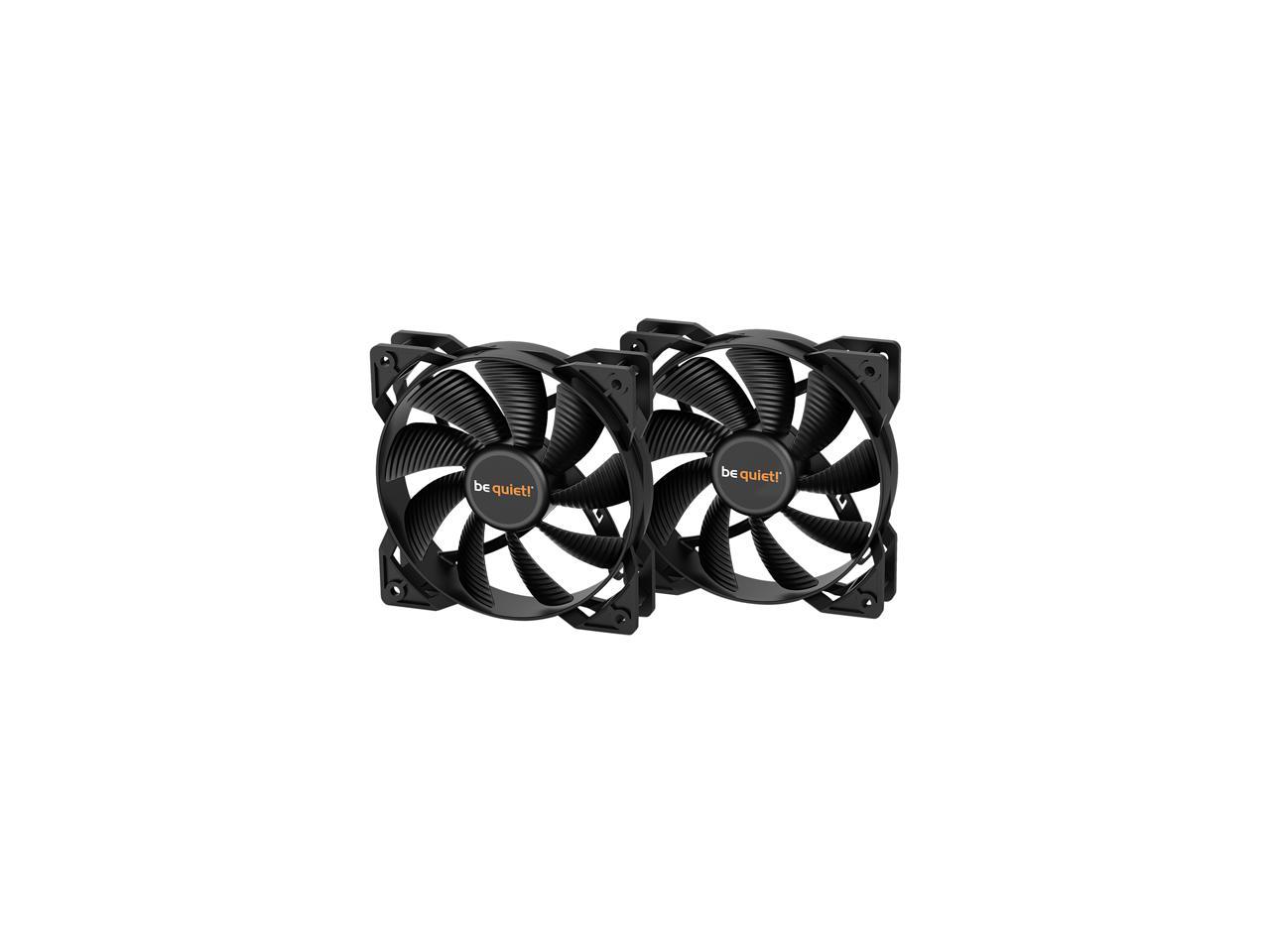 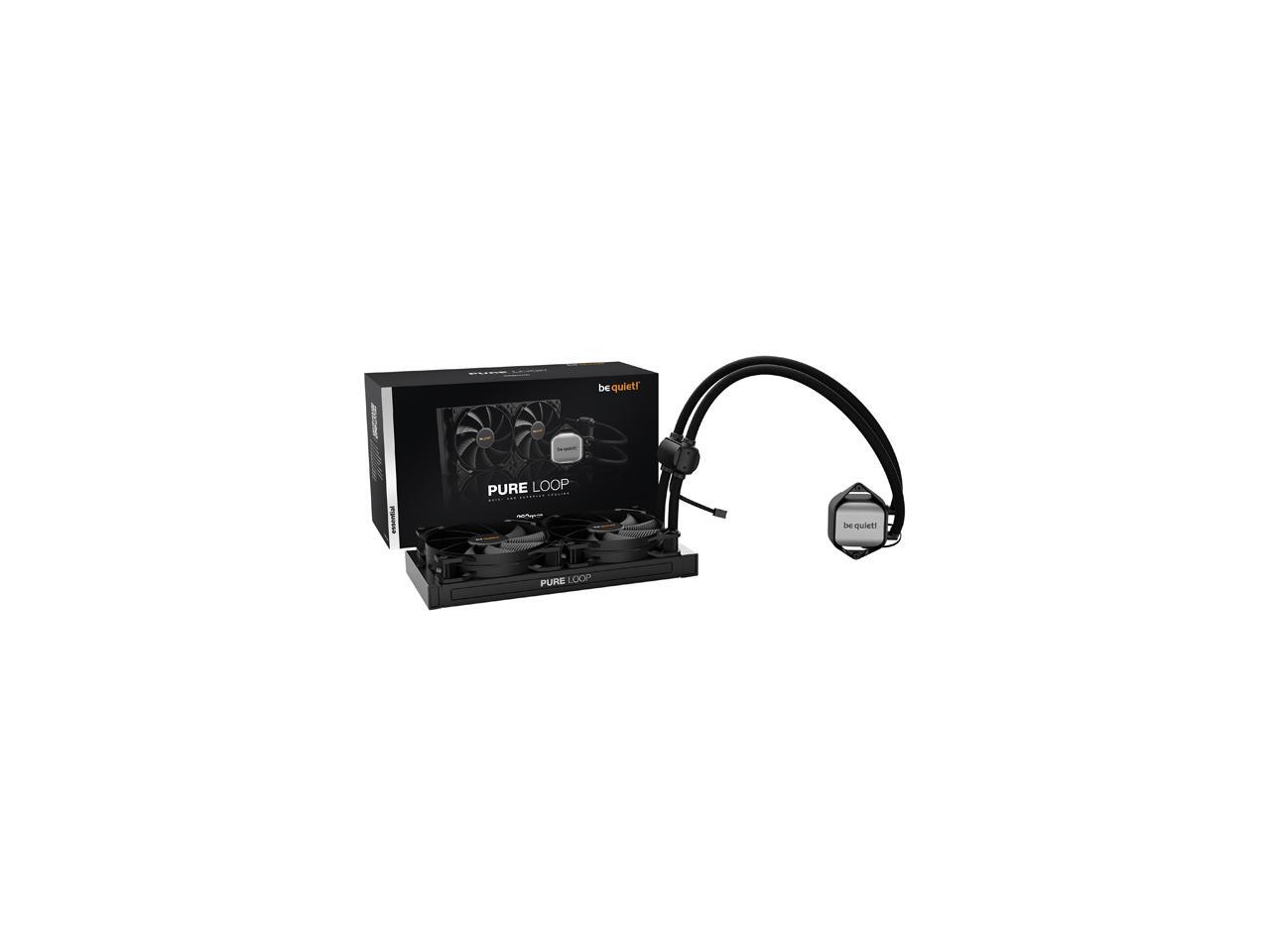 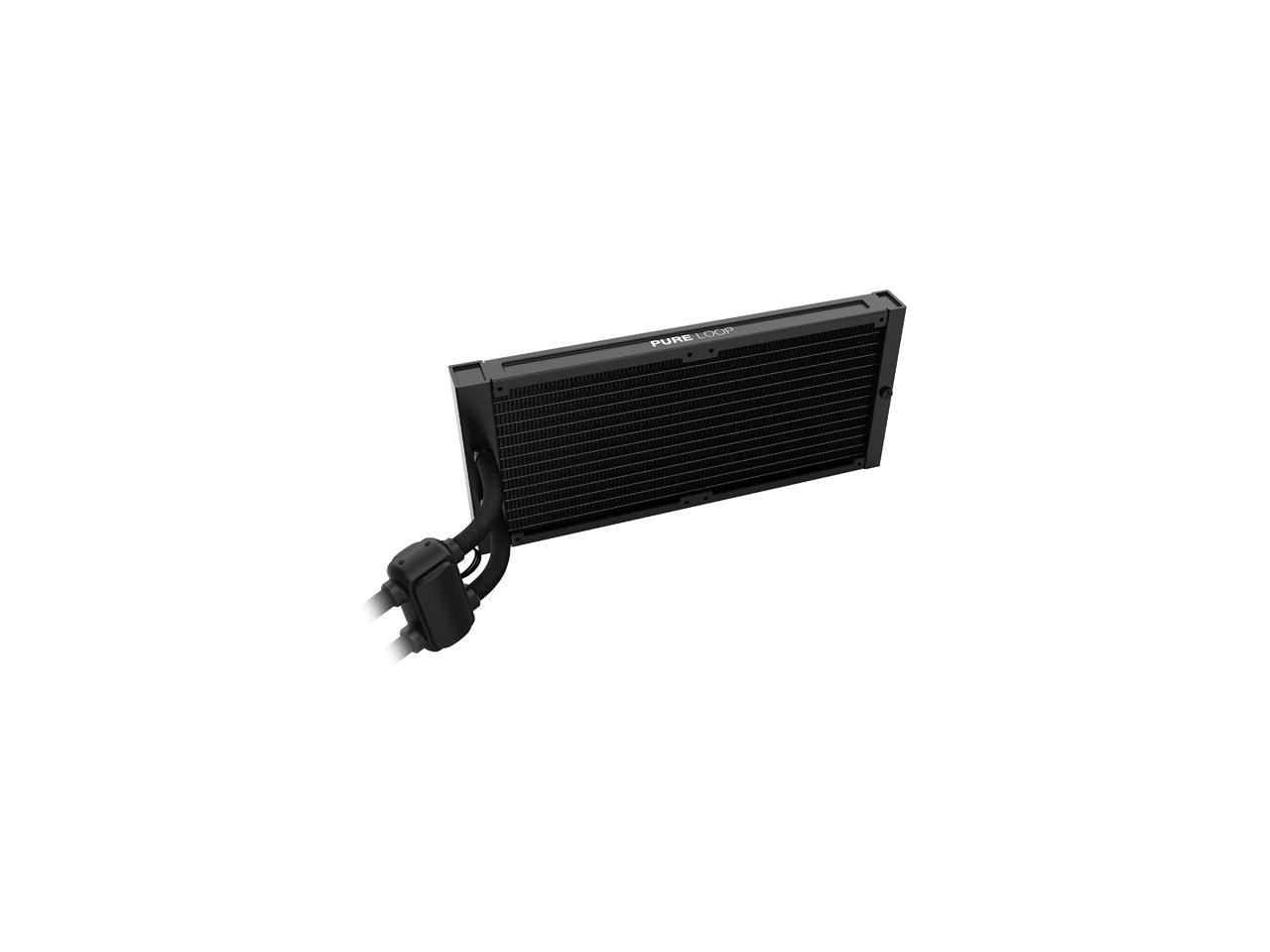 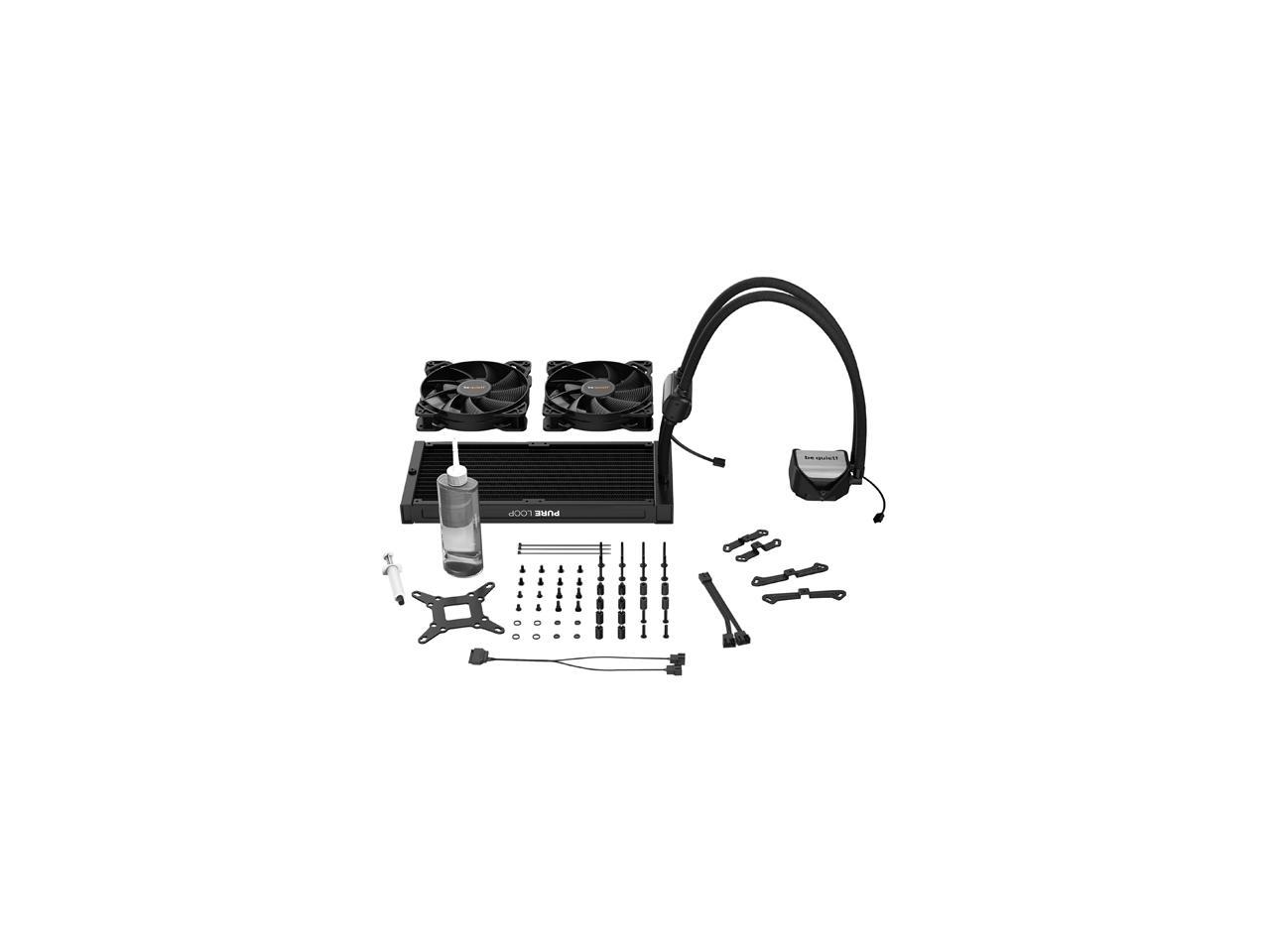 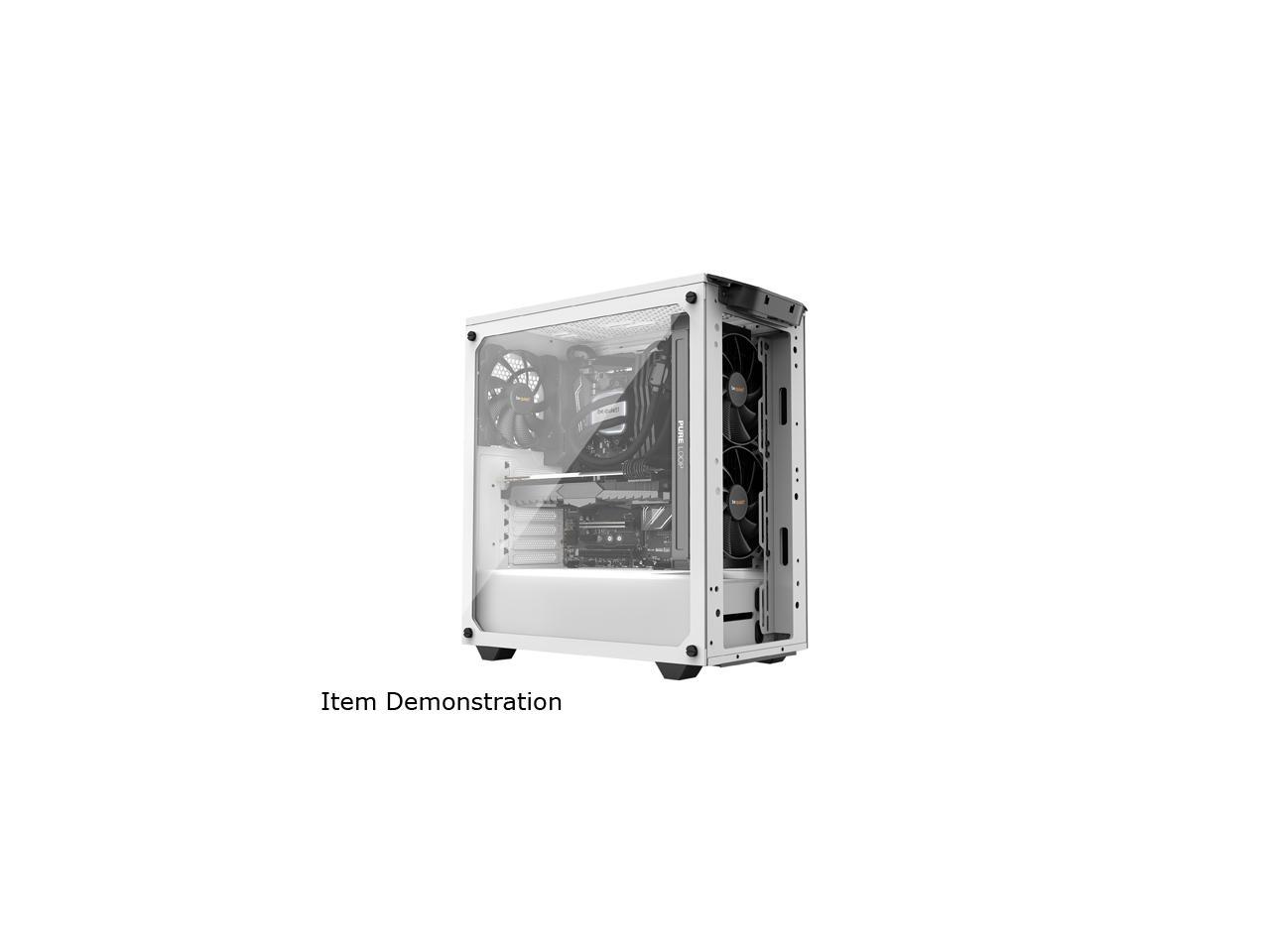 Pure Loop 280mm is the new impressively high-performing and silent All-in-One water cooling unit of be quiet! for price-conscious users with overclocked systems.

With Pure Loop even the most demanding applications can be used reliably. An immense cooling power provides low temperatures even during periods of peak CPU performance.

Thanks to the effective damping the pump causes only minimal noise and vibration. This is the key to guarantee the famously silent be quiet! operation.

The refill port is easy to access which makes refilling safe and comfortable. The included coolant bottle additionally guarantees a long lifespan.

An unmistakable and stylish look

An all-black design in combination with white LED illumination makes for an elegant look. This is further underlined by the aluminum-style cooling block that guarantees the Pure Loop to look good in any system.

Learn more about the be quiet! BW007

Cons: LED light died after two weeks of use

Overall Review: If you don’t care about the looks it’s really good cooler

Pros: -Separate pump, especially nice if you have a front upper case fan blowing cold air to it. -Clean, elite looking white illuminated square. -Quiet Fans, even under full load it's barely audible. -Ryzen 5 3600x idles at around 30-35 Celsius and 60-63 Celsius under Aida64 load. -Does not get better than that for an aio 280mm system. (noise/performance) ratio is insane.

Cons: Personally for me there was nothing that stood out that was worth mentioning here. It's be quiet. It's German engineering. It works.

Pros: Cooler temps and more quiet than the Wraith with a 3700x Basically easy to install but a few gotchas White light cooling block (if you get it to work)

Cons: Lighting on the cooling bloc will not work if wired as instructed (mine wouldn't) Will not fit attached the top of a BeQuiet 500 case without crunching normal sized RAM sticks

Overall Review: This is not a negative review at all--I ended up liking this thing. I like the design with the pump not integrated into the cooling block and the understated lighting. In my short time with it, once I got it to work right, cooling and sonics are pretty good. Its my first AIO in several years after an AIO from another vendor died in under two years of use. I am reserving judgment about refilling the radiator down the road with the included extra coolant. I was surprised that there was no way to cram this thing into a current BeQuiet 500 case following the instructions which recommend attaching it to the top of the case, for which there are abundant slots--the radiator/fan assembly lies on top/touches the normal sized ram sticks and adding more RAM would be impossible without removing the fan/radiator. The same thing will likely happen if the top of your case does not have adequate clearance above the motherboard--that's probably an issue with all 2 fan sized radiators and smaller cases. However the radiator/fan can be attached to the front of that BeQuiet case, where I wanted to put it to begin with, but the instructions do not mention that placement. I am not sure that arrangement is ideal for the "push" configuration they recommend but my idle temps are generally at least 10 degrees lower than the Wraith so it must be ok. Compared to some other AIOs I have known and hated installation is really not bad at all once you decide where you want or need to put the thing. Not having extensive RGB means less cables to deal with. The included paste--a nice touch-- does not spread adequately if you use the center "dab" placement for a Ryzen, you need more extensive coverage or temps will not be where they should. But that is not uncommon regardless of cooler. Another reviewer on this site said the light on his/her cooling bloc died after two days. Mine never worked when hooked per the instructions into the supplied Y cable to SATA configuration with the pump power cord. DOA? But inserting the light cord into a motherboard fan connector: voila, it works. So that is a ding for either a bad Y connector or something else. I was going to return the thing--if the light didn't work something else could be wrong with it--until I just switched the connector. Being attached to a fan header seems to dim and brighten the light: I have no idea if that is because of varying power from the fan header or programmed into the light. I am assuming direct attachment to the fan header is not a problem with voltage to the thing. With those caveats I think for the price this seems to be a pretty good 280mm AIO as the reviews all seem to agree--once I figured out how to get the lighting to work buyer's remorse, really I was hacked off, disappeared. The BeQuiet case front has enough bling for my tastes so the understated white light of the cooling block is a welcome change from the blingy Wraith.

Cons: -The pump noise is loud at full speed (in a "be quiet!" sense of loud). Not a jet engine or anything. -The screw thread on the radiator is not standard metric machine threading. This means attaching 4 fans to the radiator was difficult, but not impossible.

Overall Review: After attaching my pump to a MB fan header and syncing it to fan speed I no longer hear pump noise. While overclocking my CPU, the Pure Loop 280 kept my processor from thermal throttling during an hour prime95 stress testing.

Overall Review: Honestly It really makes me happy because of how well it works! Keeps my temps below 50 C (would be 80-90 before I used this cooler) when stressing my CPU and playing a demanding game for a bit! Works so much better than I thought! Also it comes with extra components like cooling liquid, sata power cords, thermal paste and more! I do like this product so far!

Pros: - Quiet performance - Easy to install- Keeps CPU cool as it should- Easy to read instructions- Comes with extra coolant to refill radiator

Cons: - LED ring around block died after about a few weeks. Did come back on once and was dim before becoming bright again, but promptly stopped working again upon next use.

Overall Review: - Overall a great product. Keeps system cool as advertised. Only issue was and is the LED light.- Owned for approximately 4 months and is still going strong.

Pros: Pump separate from the heatsink

Cons: No RGB if you require it.

Overall Review: Easy Install. No RGB. No Pump speed control. Pump runs at a set speed and is quiet quiet. No vibration because it is suspended with the hose. The 140mm fans run up to 1500 RPM and connects to the PWM CPU fan header. If you don't like RGB fans and need a 280mm AIO, this should fit the bill.

Pros: - Black and White theme. I am building a non RGB machine and it matches perfectly with the case and motherboard theme - Easy installation. My case is pure base 500DX. I was hoping I can fit the 280 radiator up on the top of the case, but the motherboard cable got in the way, but alternative installation to the front of the case went well. I put the pump at the bottom. - Quiet operation. No noticeable sound at all. - Great PWM fans. It came with a Y adapter as well to put in the CPU fan header. - Extra refill bottle and coolant - Good price.

Cons: - White light at the CPU socket seems to be very dominant. It is good looking, but It can get tiring after watching it for long time. It will be nice to have a way to dial it down or turn it off easily to have it blend well with the rest of the machine.

11 out of 13 people found this review helpful. Did you?