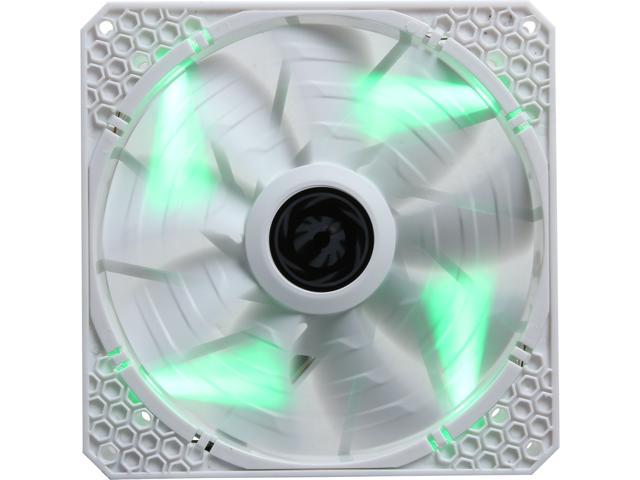 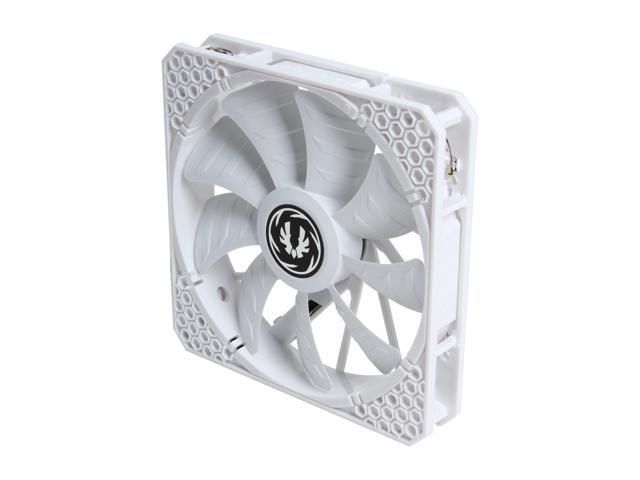 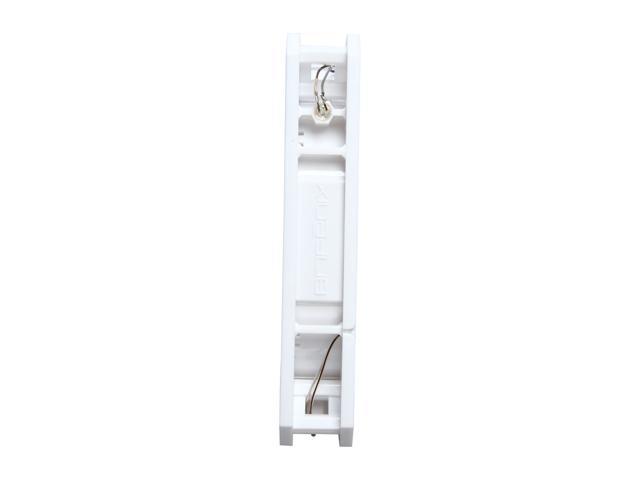 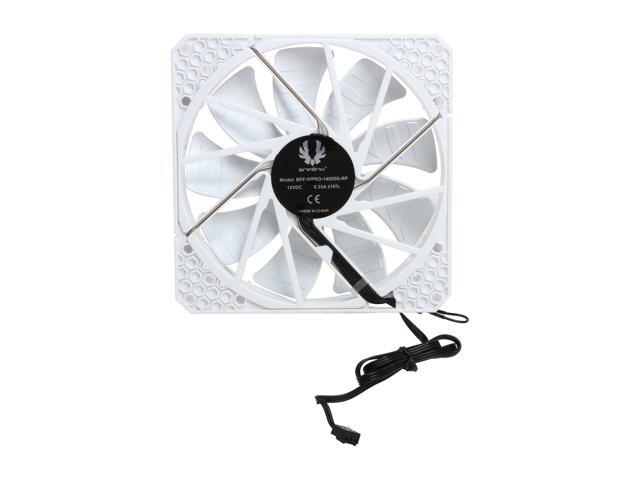 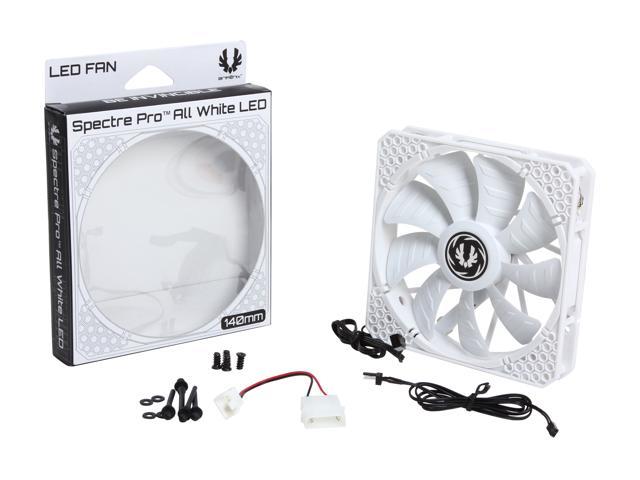 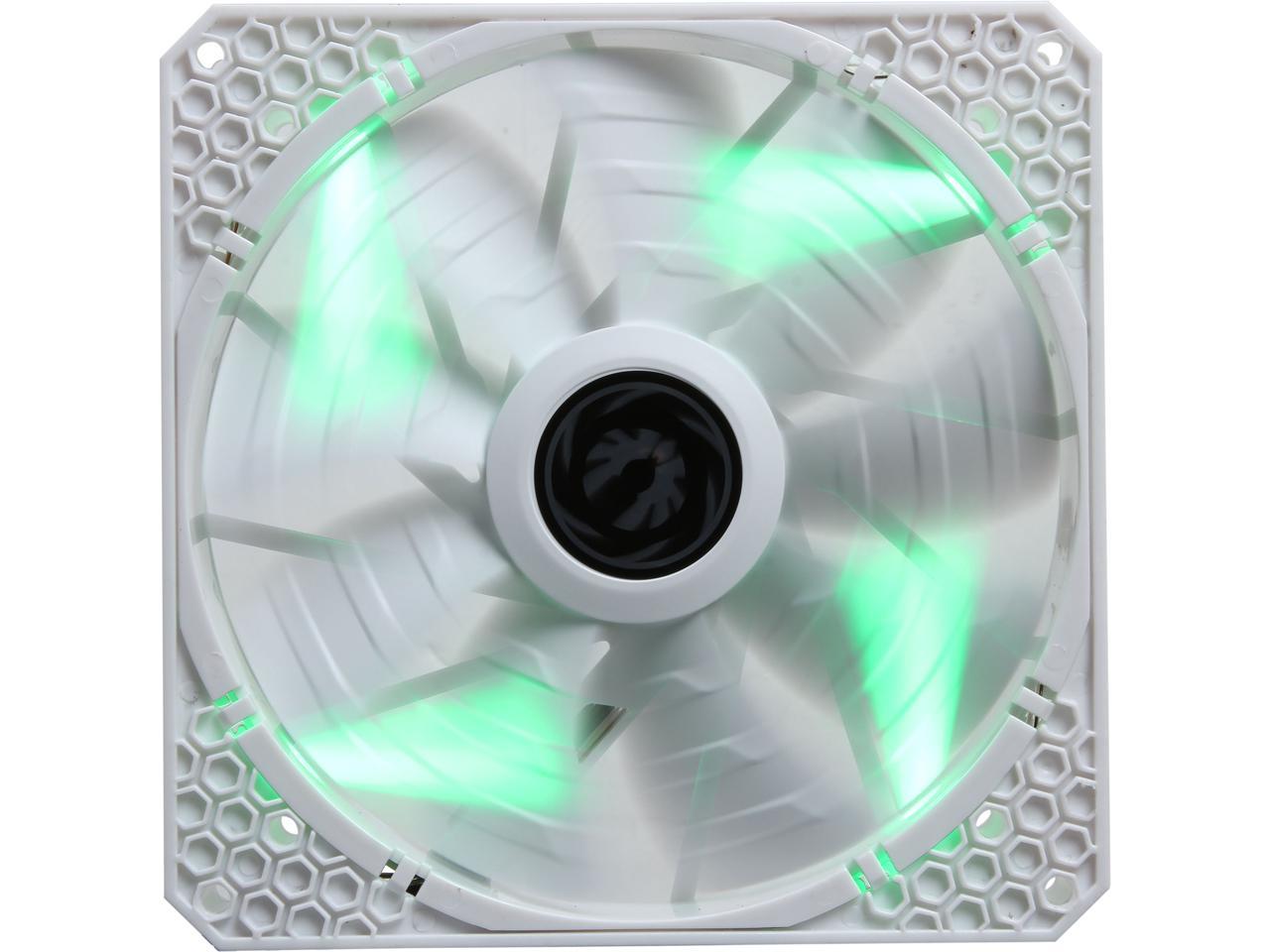 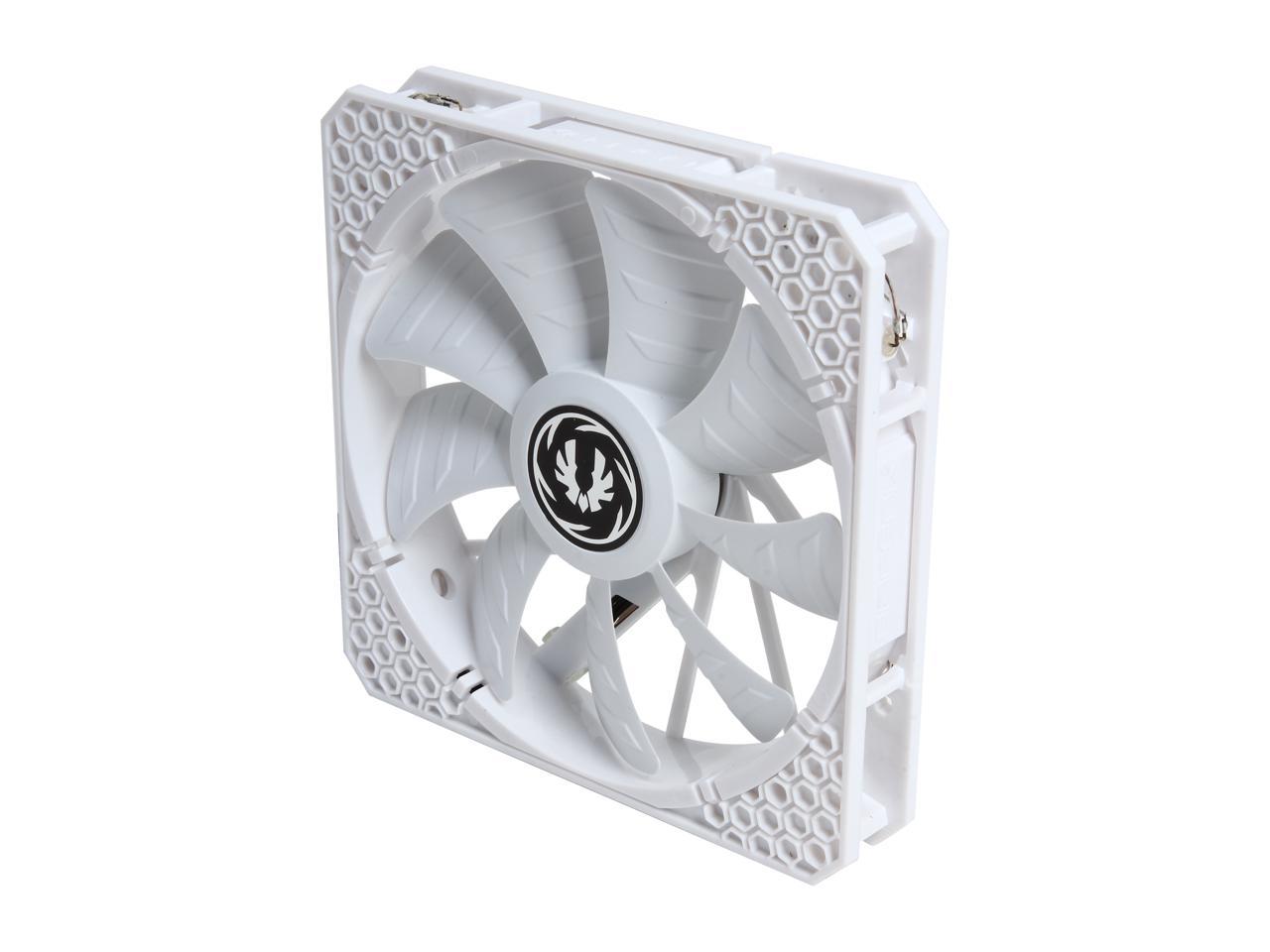 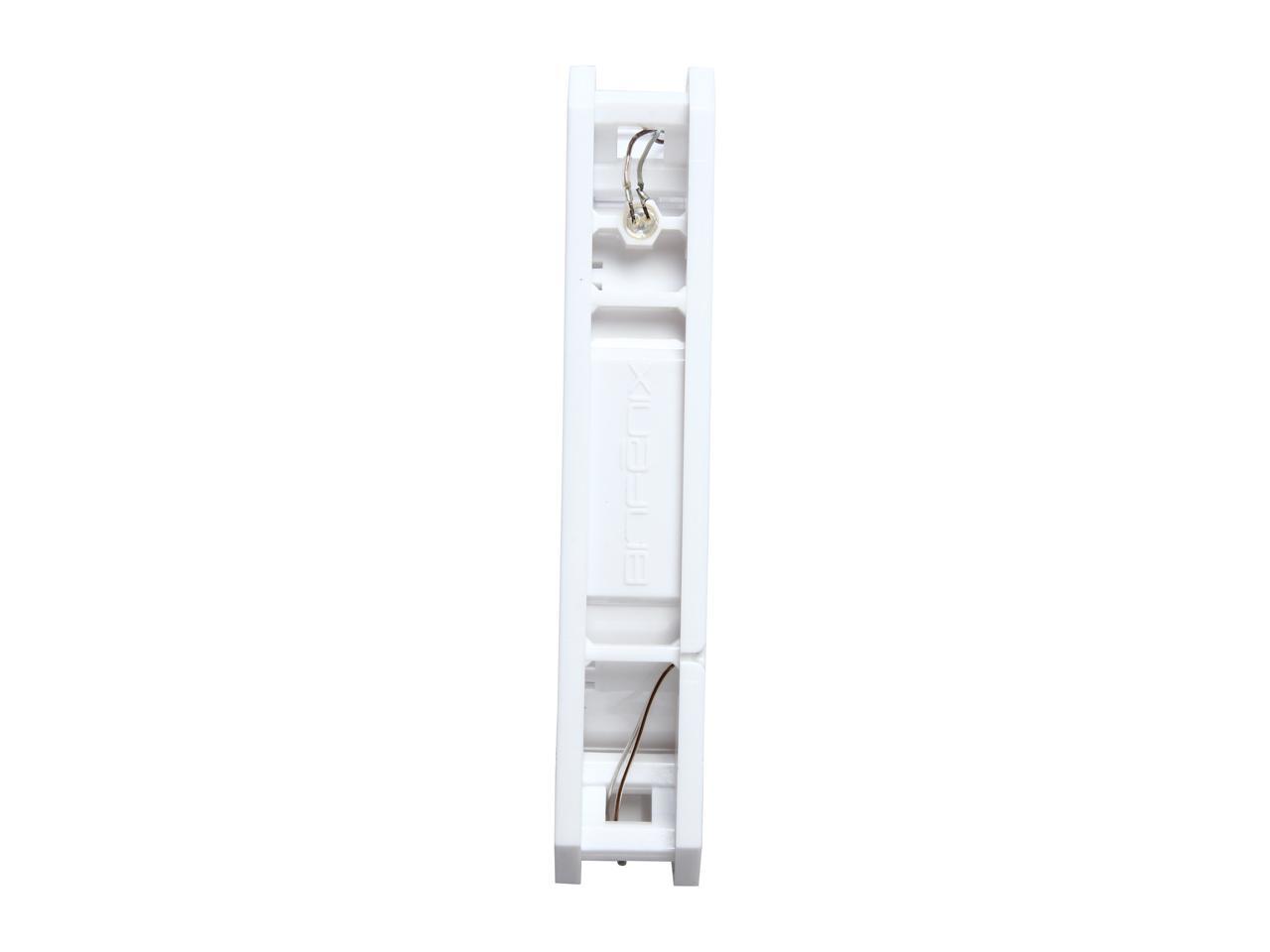 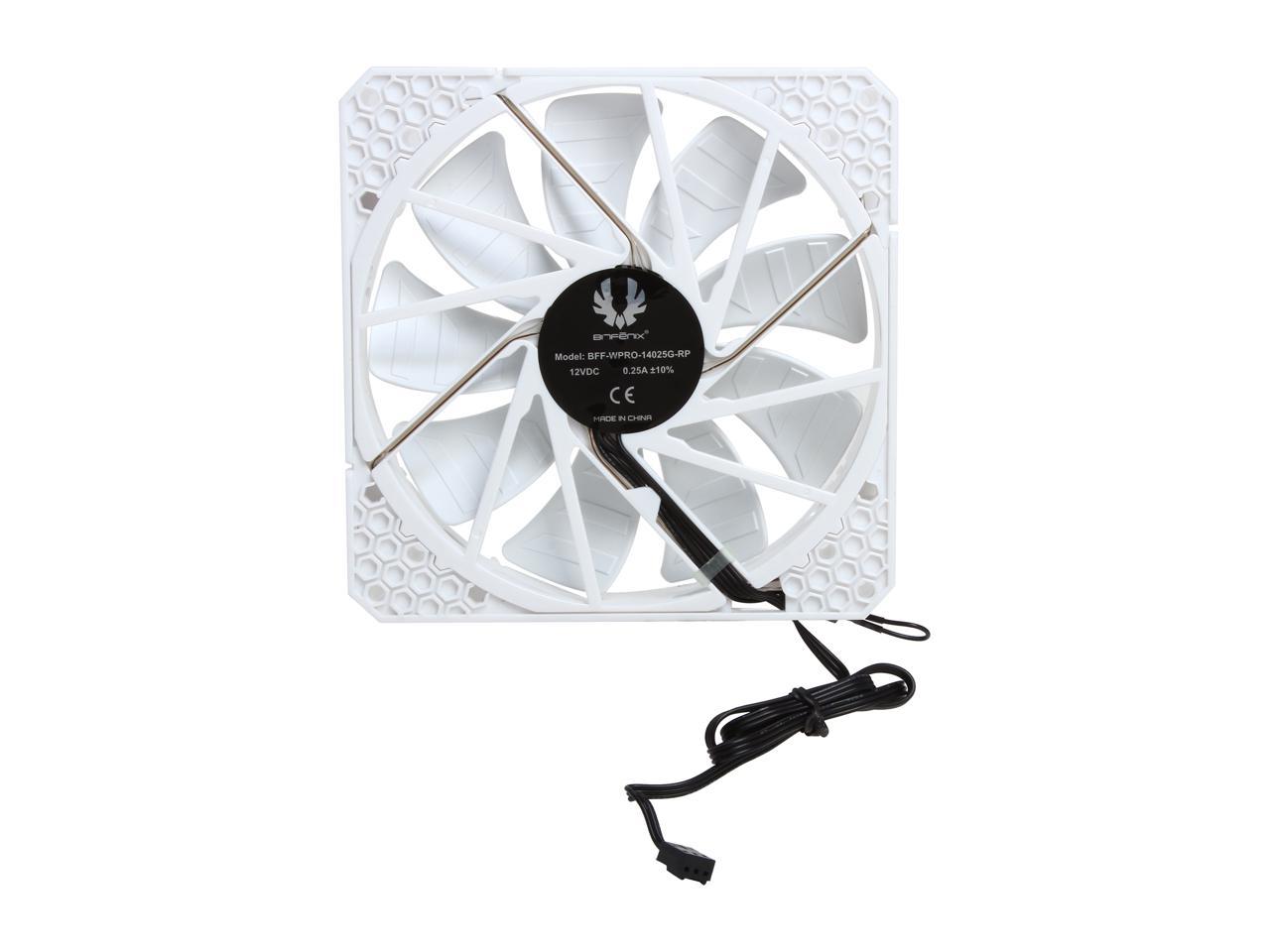 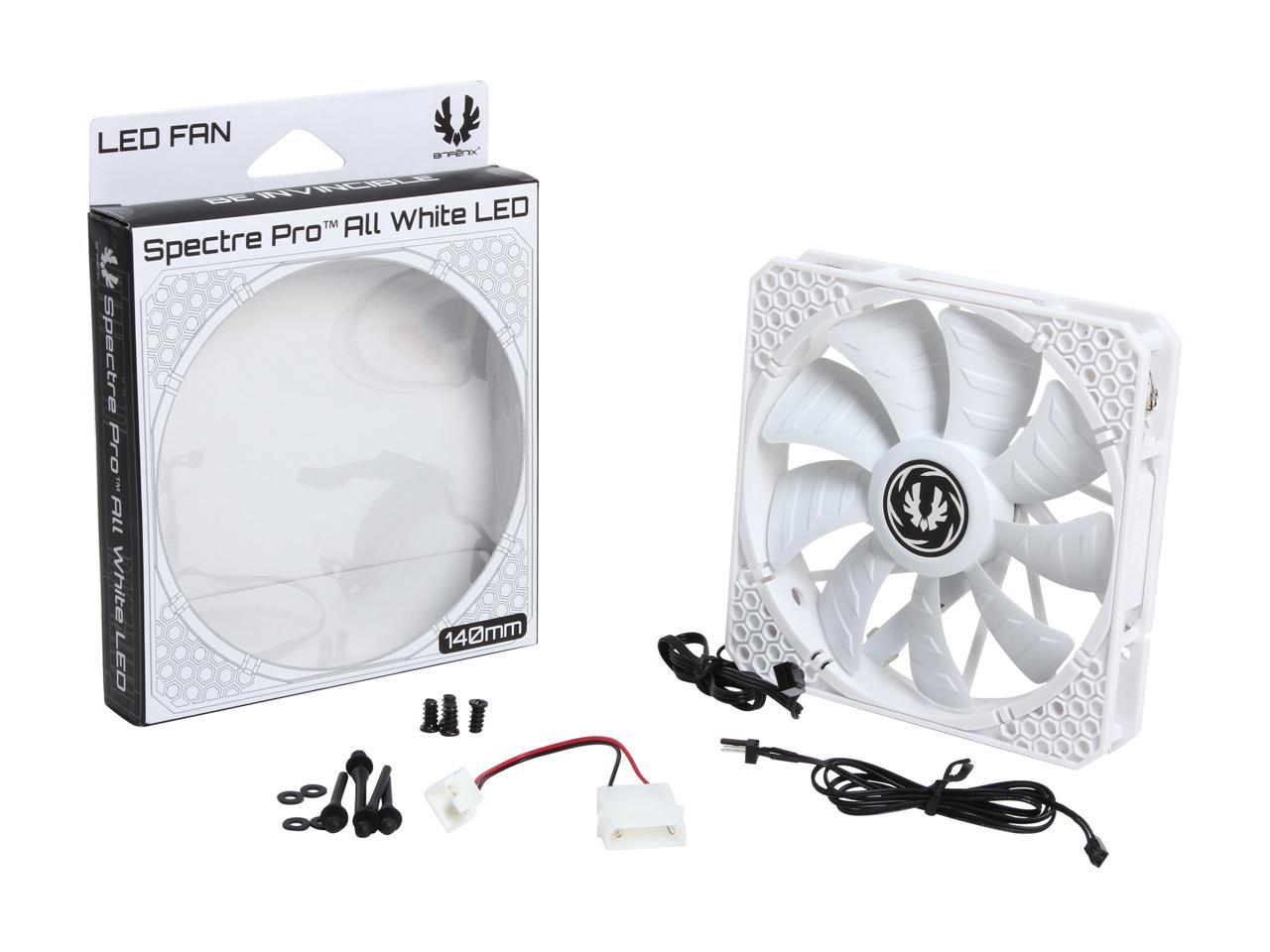 The successor to the highly acclaimed BitFenix Spectre LED, the BitFenix Spectre PRO LED case fan raises the bar high with an all-new design and enhanced performance. Its high pressure/CFM design produces the cooling performance you want for your gaming rig, and the Fluid Dynamic Bear (FDB) technology ensures the long life and low noise you need for hassle-free cooling. The dual frame gives a professional look and helps dampen vibration for a low noise level. The reinforced blade is rigid to prevent warping at high RPM levels, and the focused air ensures the cool air can reach your components, without being wasted in non-hotspot areas. The Spectre PRO LED comes with an array of vibrant LED color options, which can be turned on and off to fit your needs. An included low-noise 7V adapter and four anti-vibration rivets (for 120mm and 140mm versions) further lower the noise.

If you want high performance, low noise, and an extended lifespan for your case fan, the Spectre PRO LED offers them all.

Pros: Beautiful, pushes a decent amount of air, and isn't too loud. Out of the box impressions are good.

Cons: Price. Uses a rifle bearing. Bitfenix has some misleading marketing going on.

Overall Review: Like a previous reviewer has pointed out (and got downvoted for), the bearing in this fan is a rifle bearing. Rifle bearings are similar to sleeve bearings with some small changes to increase lifespan and noise to comparable levels of ball bearings. While they do contain some fluid, they are of a lower quality and don't have the same performance as a true FDB. Because there's no standard for naming bearings on these fans, companies can throw around whatever names they want. For example, Phanteks uses an Updraft Floating Balance bearing, which is a fancy name for "Sleeve". It's hard to know what you're getting unless you open the fan up and look. These fans performed well out of the box, and since they have rifle bearings they can be used in a horizontal alignment without wearing out fast. However, I'm docking an egg for price and misleading marketing on Bitfenix's part. If you want a high quality hydro or FD bearing fan, look elsewhere.

Overall Review: I purchased this to replace the Coolermaster Megaflow 200mm that has performed well for 2+ years. More CFM was wanted and this did the trick. Very noticeable increase in airflow over the coolermaster unit. Also a little louder, but when running flat-out on X79/4930k for hours transcoding BD's it's a good trade. I really like the white LED's which adjust with the fan speed when using just the 3-pin fan connector and LED jumper. The fan has been running full speed for over an hour now and hasn't gotten warm.

Pros: Almost everything is a pro on these. - they are very quiet, almost silent, so much so that they can be run at full speed at all times - clever connection solution to control & disable LEDs - LEDs are low light, so even when on they are unobtrusive - low energy use, under 2 watts each w/ LEDs dsabled - airflow is good, but SEE Cons - large frame & diameter, which can also be a Con

Cons: These are nitpicks, so no eggs off: - airflow is probably as advertised, but it feels weak (still good for the silence) - they are not perfectly silent, but they are almost so - you can hear the blades cutting the air - when your ear is close to the exposed fans, you can hear a faint electrical whine - installed in a case and more than 3 feet away, they are effectively inaudible (a Pro) - large frame & mounting options might be a minor problem, if you didn't read the specs - minor vibration, easily solved with bits of rubber matting - there was no molex adapter to connect the fans to a power supply if no fan headers are available

Overall Review: I didn't buy these for a computer case. I needed them to help exhaust heat from a room. They are super effective, and quiet. So quiet that I can't hear them at all, even when every other device in the room is turned off. Everything I needed. However, I do wish they moved a little bit more air, but that's expecting more than the specifications, so no eggs off for the products. I can probably solve that concern by installing one or two more. The room I have a number of computers in gets a bit warm, but it has a drop ceiling. So I custom cut some sturdy cardboard int a box that fits exactly where one ceiling tile was. or durability, I spray painted the cardboard with matte white enamel, especially on the inside (which people have to look into when they enter the room & see the ceiling). The cardboard is sealed against moisture and cxan be easily damp-wiped clean when necessary, the matte white produces a low orange glow from the fan LEDs, when they are on. I then mounted two of these fans in one side of the box, and they pull over 150 cubic feet (up to ~200?) per minute out of the room, at the top of the ceiling where heat is pooling. Ambient air temp dropped from about 80/82°F to about 70/72°F. A VAST improvement in working conditions, with zero noise added to the environment. The LEDs are controlled by a jumper wire loop in-line with the electric feed to the LEDs. This can be connected to a controller in a computer case, or just manually plugged in/unplugged to turn the LEDS on or off. I connected a wire loop to the connection that hangs down from the ceiling against the wall and can plug or unplug the jumper at will. the wire is white & thin, so very unobtrusive. When I'm working at night or watching movies (my home office doubles as my entertainment center for games/web surfing/movies/etc.), I can plus the LEDs in and get a faint, ambient orange glow as a nightlight. Comfy. When two fans are running simultaneously, without the LEDs connected they consume about 3.8/4.0 watts energy. Connecting the LEDs jumps teh power use to about 5.0/5.2 watts for the two of them. I bought a 12 volt/800 milliamp power adapter at a Goodwill for $1. I cut the barrel connector off it and directly wired it to the leads for the fans. It's plenty of power to run both fans (they are rated at 250 milliamps each). Theoretically I could run 3 fans off this wall wart simultaneously, or fins a 1.5 amp block and run 5 or maybe six. Pretty sure I'll buy one more fan and see if I can run three off it, and that should maximize the useful exhaust I can generate for the room. Of note for this project and for computer cases: these fans do generate a minor vibration. Such large fans spinning at their rated speed cannot be expected to be perfectly balanced, even though they are close. So I used the foam rubber matting that you can put under rugs and placematts and such to provide anti-slide traction. By cutting small approx. 1/4 inch square bits I put the pieces between the fans and the mounting surface (the cardboard box) where the screws pass through them and hold them in place, and it killed the vibration. On a computer case it may not be necessary, but when mounted to a cardboard box, it acted as a sound amplifier and you could hear the vibration until a dampening material was put in place. I'm very happy. For under $28 in total supplies (I got these fans on sale, so the pair was under $25 with free shipping), I converted my office from a sweatbox into a pleasant work space

Pros: It's my favorite color, it's huge.

Overall Review: I purchased a new GPU to go x-fire for upcoming BF4. I noticed my temps increased a bit so I purchased this fan. It fits well in a Cooler Master HAF 912 and brought my temps back down to my pre-x-fire build. If you like green just ensure your case can fit this fan and you'll enjoy it.

Cons: Led's not that bright doesn't move much air ( not as much as a con for me as the first one )

Cons: Blades broke in a few days under normal use

Overall Review: I purchased two of these fans and within days multiple blades on both fans were broken.

Pros: Quite. Very bright if that's what you're looking for. Comes with a bunch of mounting hardware options. Slim fitting, light, and looks really good.

Cons: I had to buy another one because over of them was out of balance and the one that I got to replace it was out of balance as well. They do not explain how the LEDs work on the fan at all, they are aplenty using the fans coils to power it not the -and+ plugs they have and no a OEM led controller will not work with them unless you want to cook the wires. Need to be above 1300rpm to get decent light out of the fans and it gets loud anything below 1000rpm the LEDs start to blink non stop, so not great for a case fans but for good for a radiator which mine are mounted onto.

Pros: The blade looks sleek and great. Good airflow quality. I bought four of these.

Cons: The colour of the led lights are no as advertised. It is more of a gold color then orange. I bought one Bitfenix Alchemy orange led strip light, to increase lighting quality, but the orange is a truer colour then what beams from the led of the fan. The beam light strength isn't as bright as it should be.

Overall Review: Not really impressed, I thought having an orange flow effect to my case would be unique in style, but fans led is killing the effect. Wished I could replace them with different fans right now, but that will be for the long run. The gold led effect 140mm and the orange truer led effect of the led strip makes a decent "flame" effect for the case though.