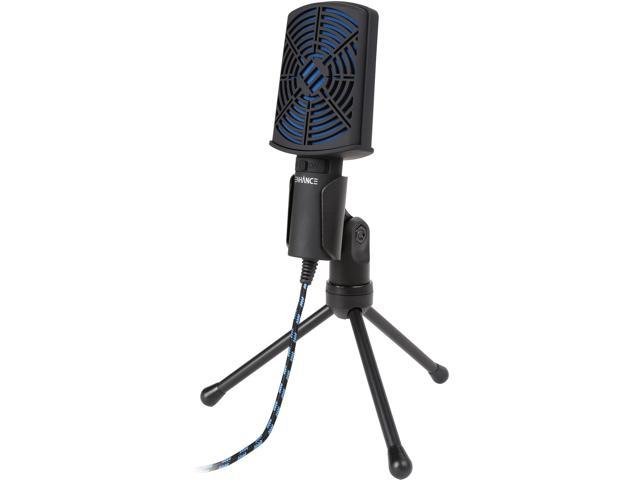 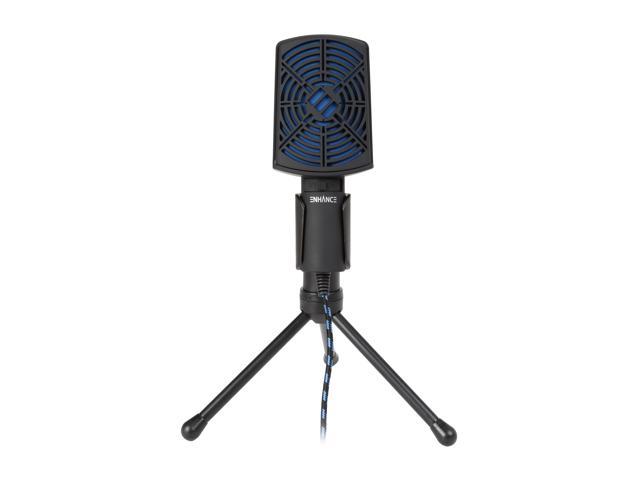 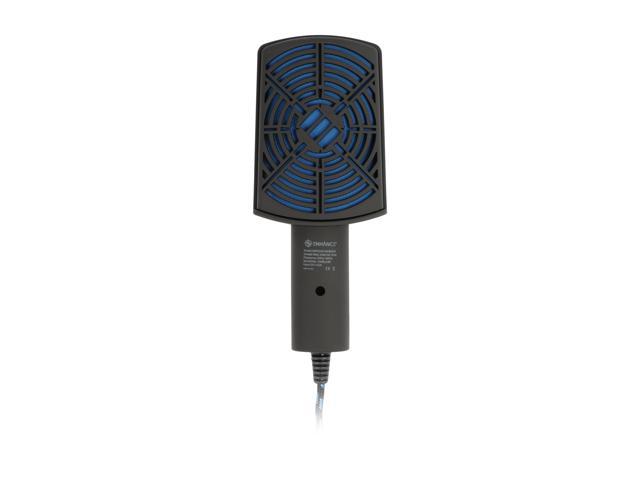 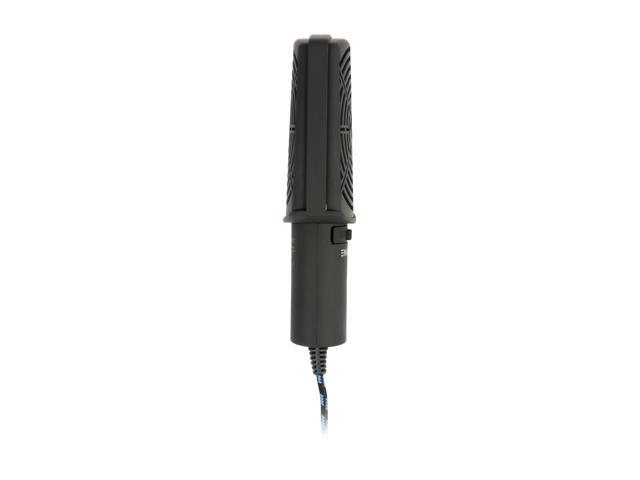 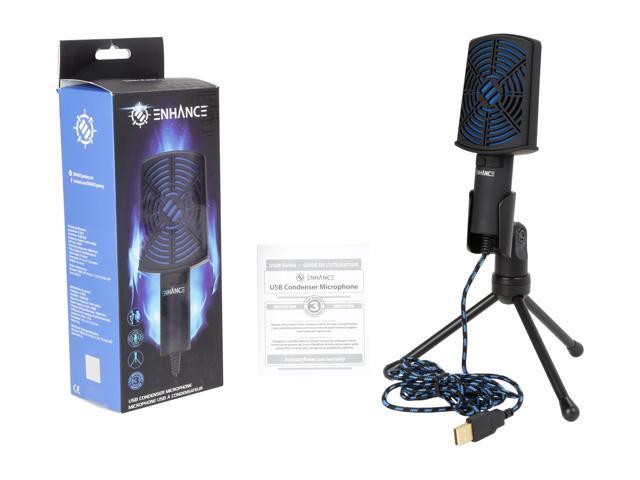 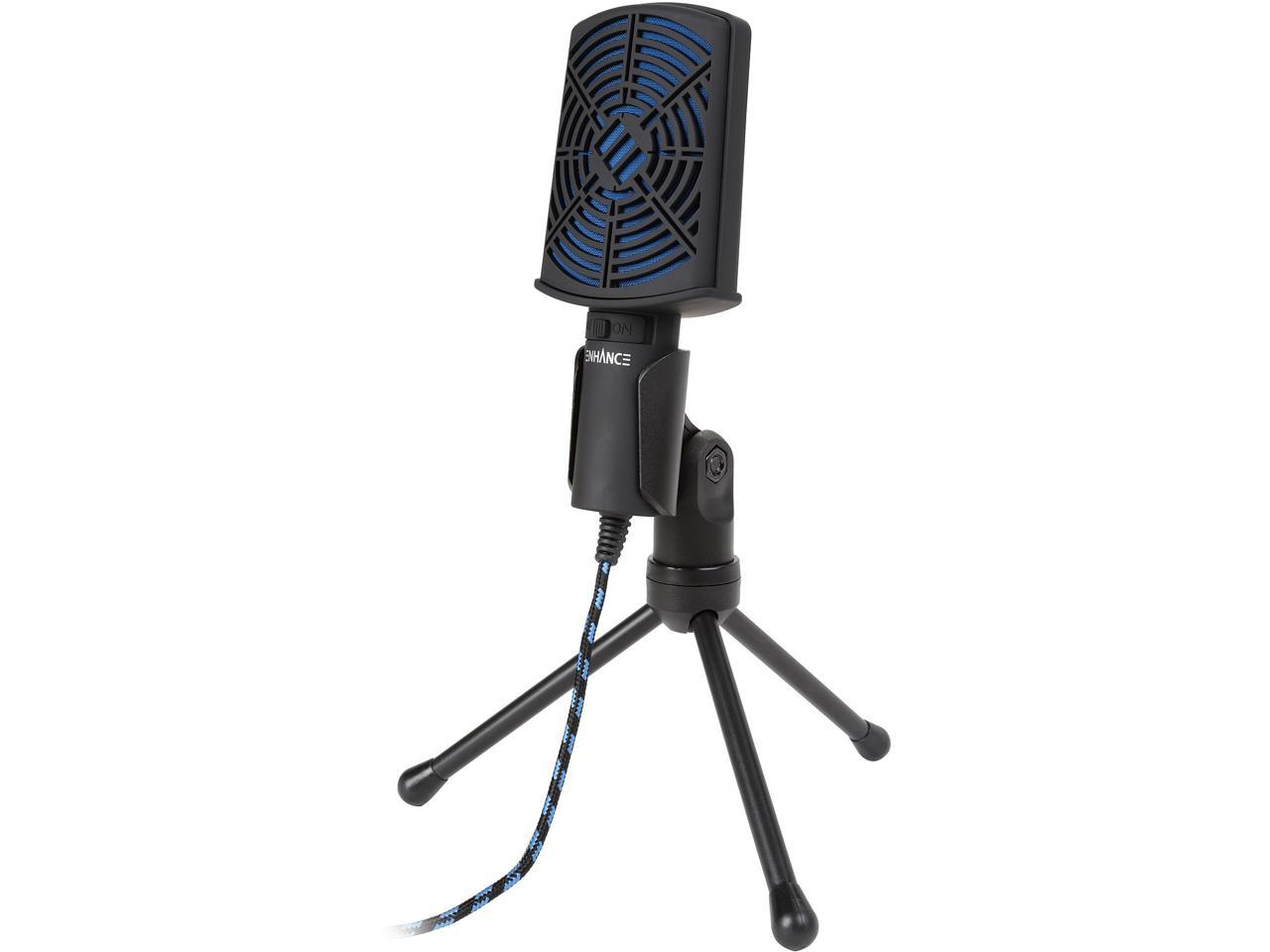 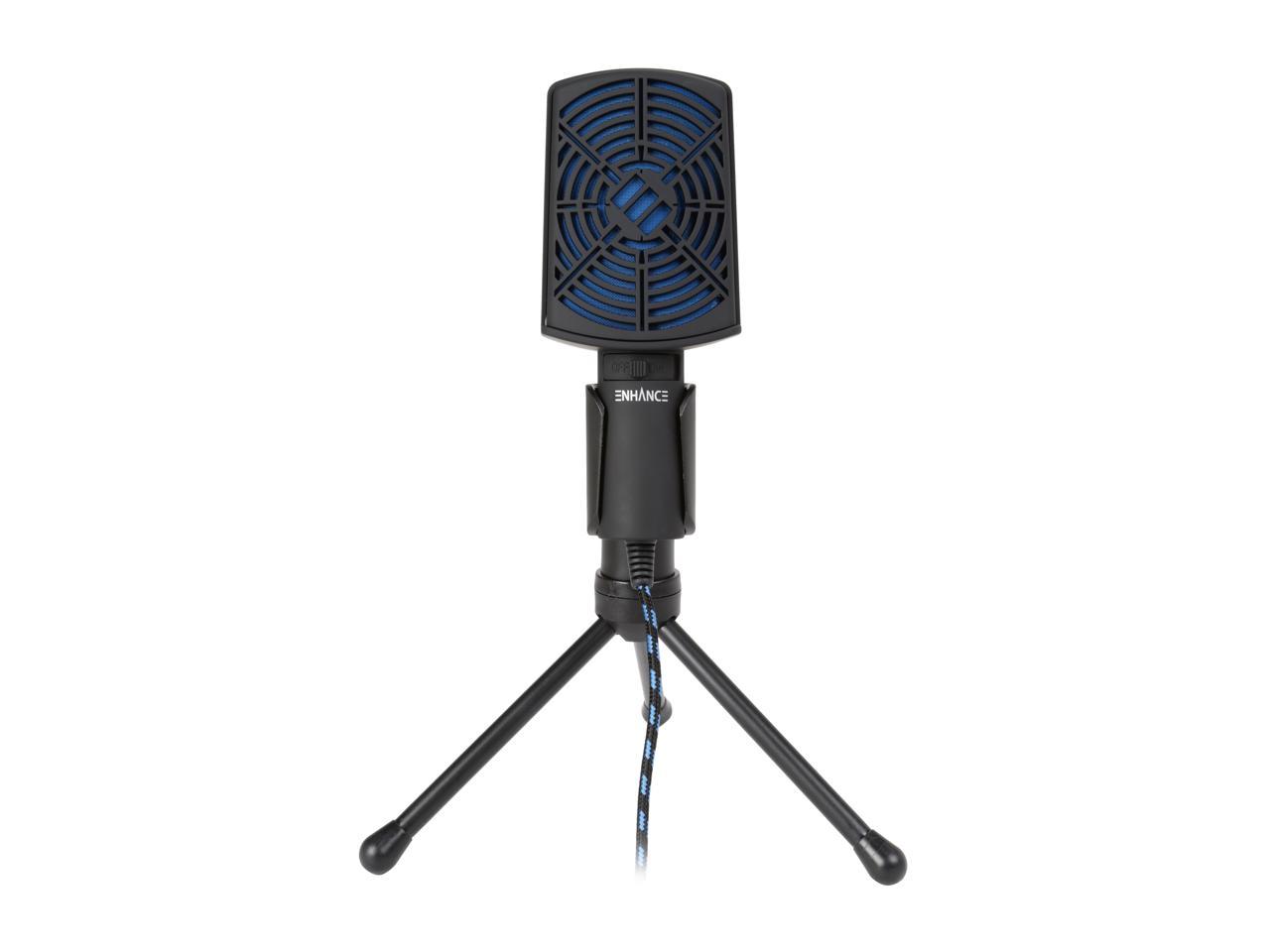 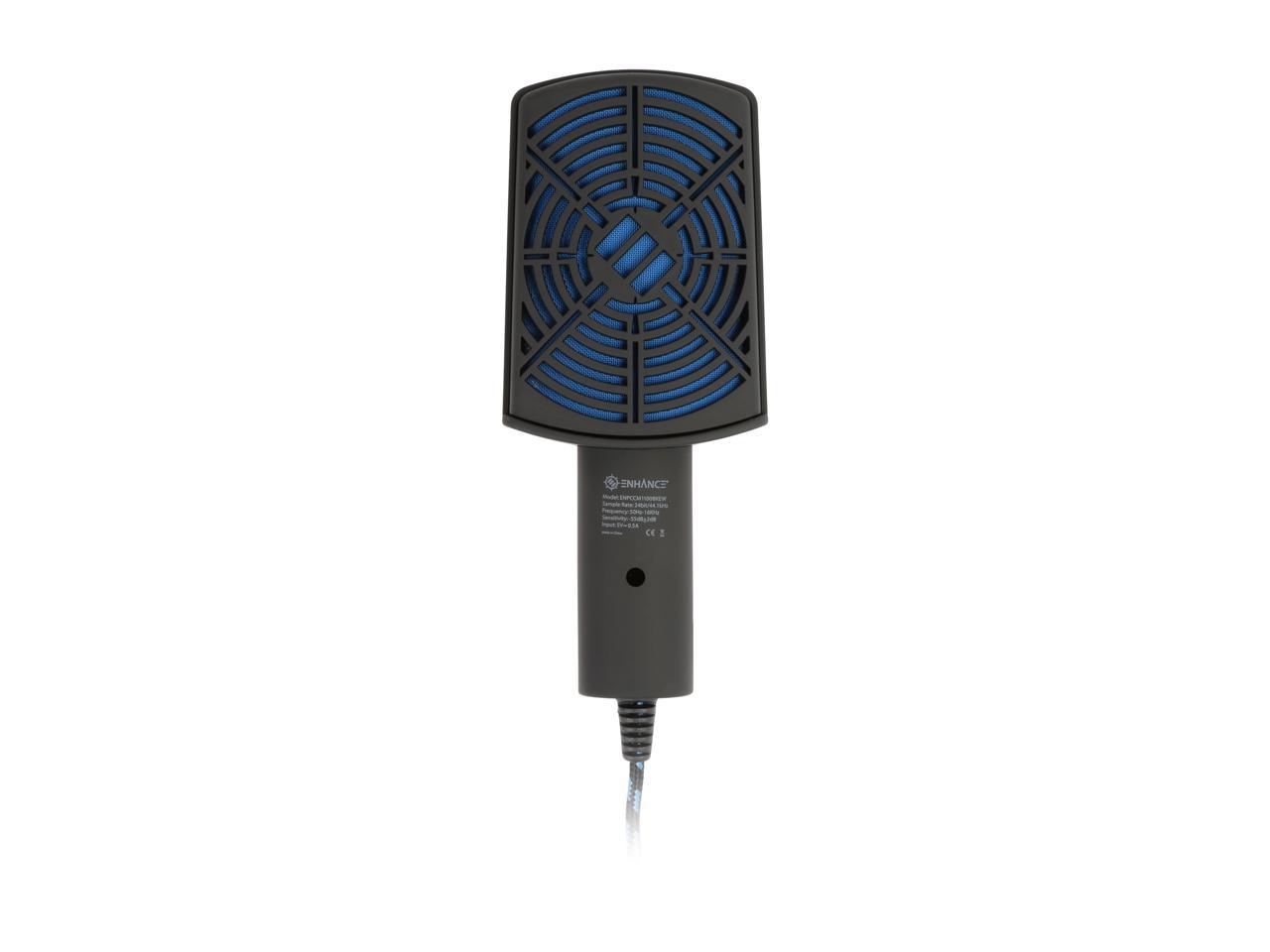 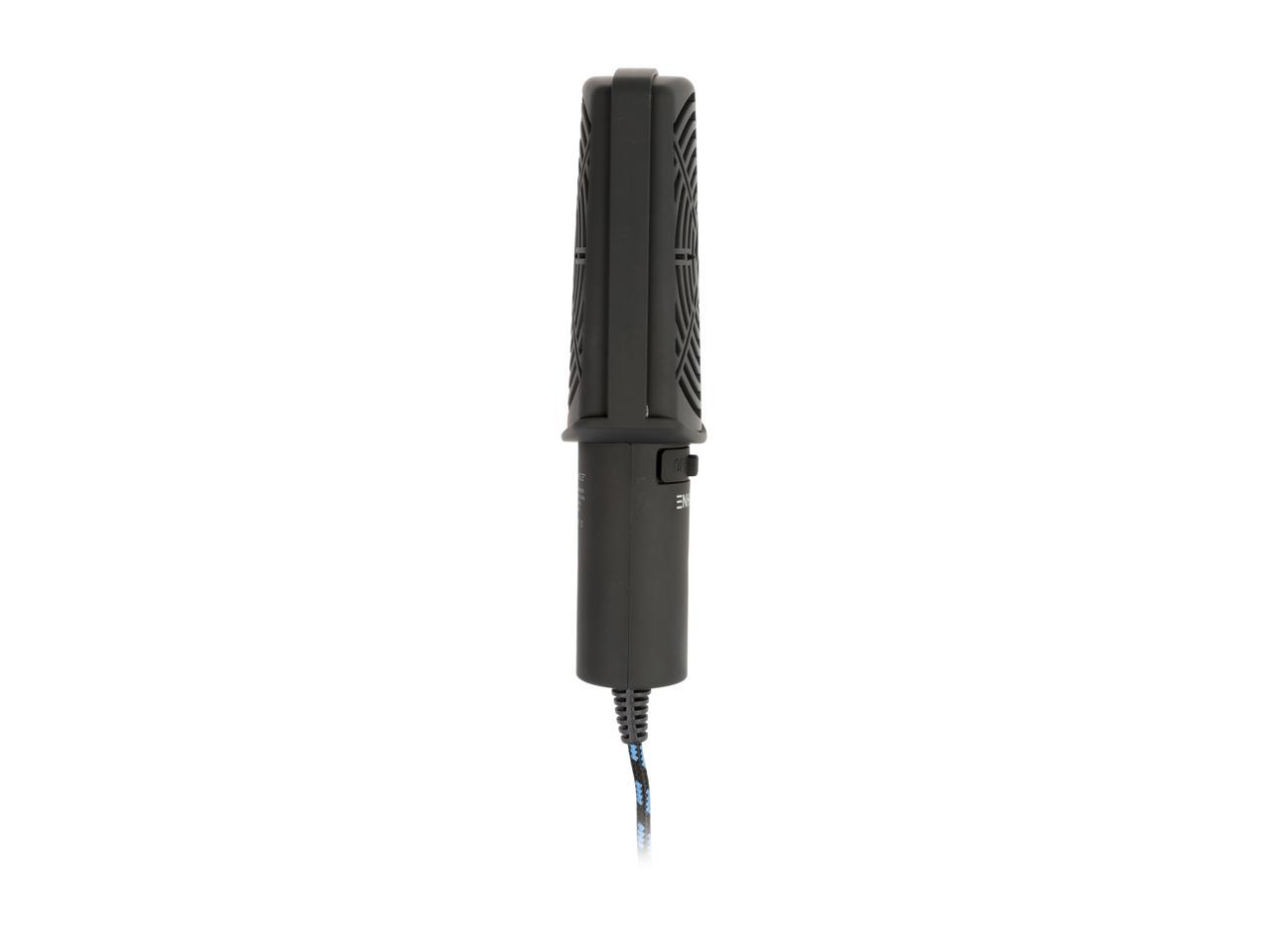 Quick-Access Mute Switch
Forget alt-tabbing, you can easily mute and unmute your microphone at the touch of a button thanks to the convenient and easy-to-reach physical switch.

Sleek Aesthetics
The ENHANCE USB Condenser Microphone has been designed to complement any gamer's setup. Sporting a sleek, black rubberized finish and eye-catching blue and silver accents, this microphone will look right at home behind your mechanical keyboard and under your gaming monitor.

Adjustable Desktop Stand
Get your microphone positioned just right with the adjustable, tripod-style desktop stand that is included with every microphone.

Learn more about the ENHANCE ENPCCM1100BKEW

Pros: -Between the tripod and adjustable neck, can easily situate this on your desk. -Plug n play, simple to setup -Works great

Cons: -Some folks say I sound a bit low, but that's the only complaint I get. No feedback, no noise from background, just a bit low even on max volume.

Overall Review: -For the price, you cannot beat this product. I got this so I could use it gaming with Discord, works great. Now I can play without having to use a headset and without giving feedback/noise to fellow gamers in voice chat!

Pros: I bought this mic for gaming. It works wonderfully. It's simply plug-n-play. Everyone on Discord says that it sounds great. The price was reasonable and I would recommend this mic to anyone looking for one. There is an on/off switch. I honestly think the mic looks cool too.

Cons: The worst thing about this mic is that the USB cable is only about 5 feet long. That's long enough for my situation, but other people might need a longer cord if their tower is further away from their desk

Cons: Probably not a big deal if you have it on your computer desk, but I have my system running through my living room tv and sit back about 8', so a cable that was about 2' longer would be good. It's about 5' and works, but I'll just get an extender so I can have it to my side.

Overall Review: For a low cost mic, this is pretty good. I've not complaints. I kind of like the "old style" mic head to it. Makes me want to sing jazz in a smoky room while drinking whisky. :-)

Pros: Cheap, great for a start

Cons: grainy and hard to hear unless you enable GCS but then gets this beeping sound

Overall Review: My laptops built in mic has same quality with less grain and noise

Pros: This is a nice budget microphone for the casual gamer, as well as any other virtual or commercial use that might necessitate using your voice. For me, several things sold me on this mic. For starters, the price. A good looking, good quality sub-30 dollar microphone suited for practical use is something of a rarity. It is a USB condenser, which means if your 3.5MM jacks are all currently occupied(for whatever reason) then it will work just fine. As well, it draws power from that same USB, so no messes with more than one cable. The cable is braided, so it means it's resistant to being broken and makes it look a lot better than the generic plastic sleeves. It comes with a neat little tripod for easy setup, and can dismount from the tripod for whatever use you need it. And, a bonus for myself, personally, is the blue color. My rig is blue-centric, so a nice blue mic accentuates the whole thing.

Cons: A few negative things. One- the cable to hook up to your tower with is only around 5~ feet, which is fine for those with towers right beside them or a marginal distance away. However, for people who have rigs a little farther away, either have a USB hub on standby or look elsewhere. Second, is the tripod. I listed it as a plus earlier, but that was for convenience. Overall quality is less than stellar. It is a plastic tripod, and it's fairly flimsy- it can hold its own, but don't expect it to last forever. I'm fairly certain the money really comes in the quality of the microphone, not the accessories. Thirdly, the lack of customization. And, by that I mean the lack of color choice. The whole old style of the mic really makes it something to be desired, but being only in blue, it's limited to a certain audience. For those with laptops, it would be fine (unless you have a gaming laptop with LED). Color clashing really bugs me. It might not bug you so much, so that negative is really all opinion.

Overall Review: Good microphone for the price, but for something more professional, look elsewhere. A few more dollars can land you something of a significantly higher caliber.

Cons: Broke after not particularly long

Pros: There is a mute button which is spectacular

Cons: It feels cheaply made sort of but if your not hard on your hardware then you should be fine

Pros: - Nice color scheme(but I'm not a fan of the overall gamer-y logo and design on it, someone else might be though) -Functions pretty well -It comes with a tripod -I can have it right next to my PC and it doesn't pick up any sound, though it is less than 35db most of the time. -omnidirectional(still picks up sound a little off to the side -Plug and Play(a nice feature, but all settings are client side, no drivers at all really, for in depth adjustments)

Cons: -Well, it's a little larger than I thought(not a huge con), basically if you wanted to have this in front of you by your keyboard, it will be in your way unless you have wall-mounted monitors. -the tripod is pretty plain and dinky, it doesn't align that well with the holding part(if having the mic centered on the tripod is your thing, it may bother you) -Picks up keyboard and mouse clicks, I expected it for the keyboard, but was a bit surprised by the mouse, I'm sure this can be solved by editing sensitivity(again not a huge con) -on/off button is lifting/not flush(not sure if this sliding button is meant to lift, or what, but it makes it look cheap) -USB not Audio Jack(I knew this going in, but I typically prefer not losing a usb port, not sure what I'm saving them for though... also someone else might consider this a pro) -build quality is a little more light and dinky than I had hoped -no software at all(as far as I can tell, you have to use windows settings to adjust, not sure if it works with anything other than W10)

Overall Review: I'm not really sure what happened with mine, it supposedly went out to be delivered to a delivery service, but it didn't make it there. Took over 9 days before it finally arrived at the service, and then another week or so to be delivered to me. When it finally got here, it was beat up, the package was half opened, the box under was smashed and completely opened, and the thing inside had some dings. I can't say for certain if this was newegg or the services fault, but it was a bit annoying, and I've come to expect more from Newegg, there's really no reason for something that has a shipping address less than 2 hours away from my address, to take more than a few days, less packaging and inventory issues. Overall, it's a pretty solid product, if you're looking for a simple mic to chat with buddies, use in game, or for local recordings for one reason or another, it functions pretty well, so long as it makes it to you. So if you want something relatively cheap, and seems to ship from the US, I would recommend this, I haven't extensively tested any microphones, but I know there are cheaper ones out there, I can't speak to their sound quality, but this one seems clear and nice to me. I would say this is great for an entry level gamer, maybe someone trying to create content and on a budget, good for a gamer-kid.