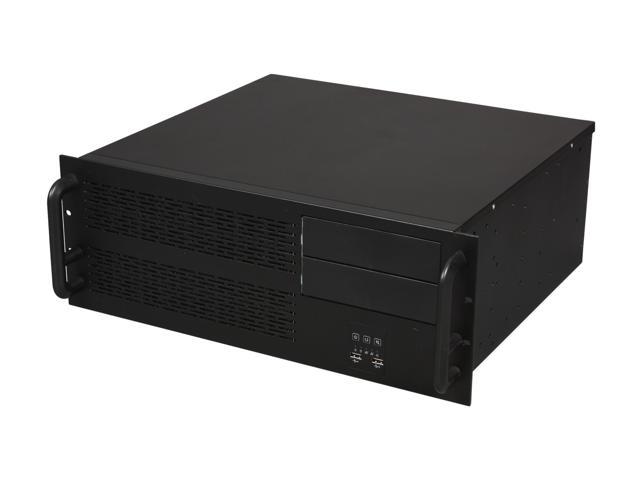 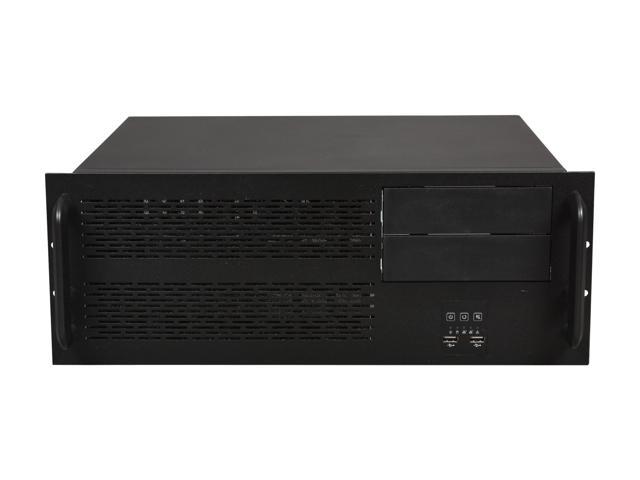 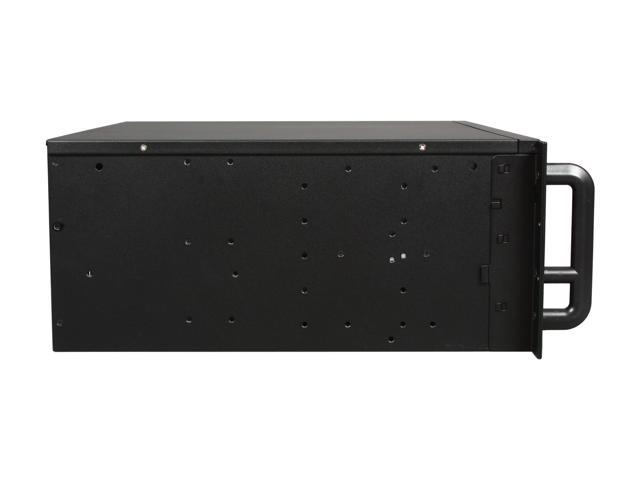 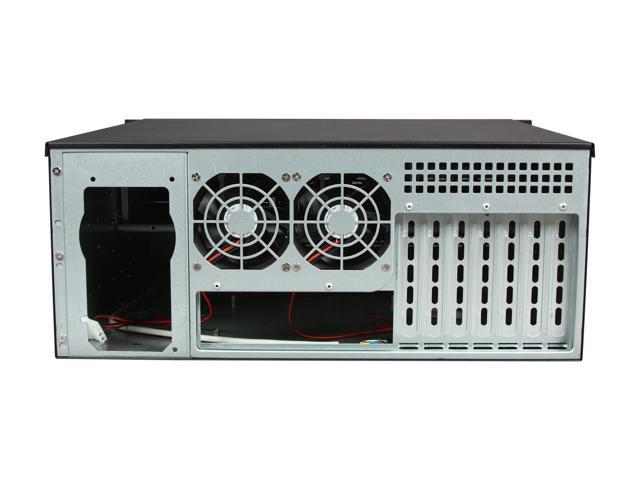 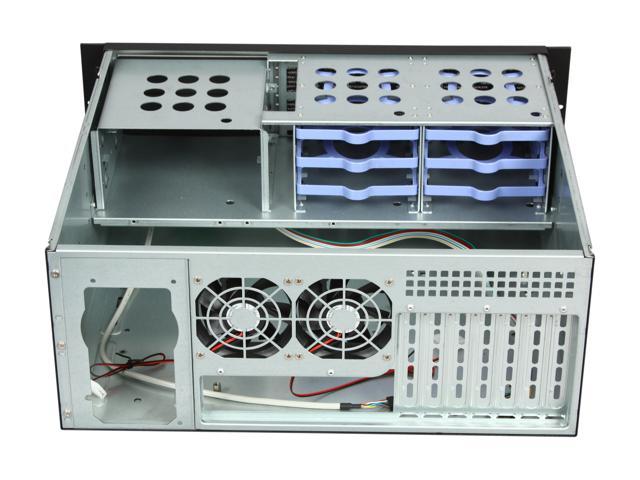 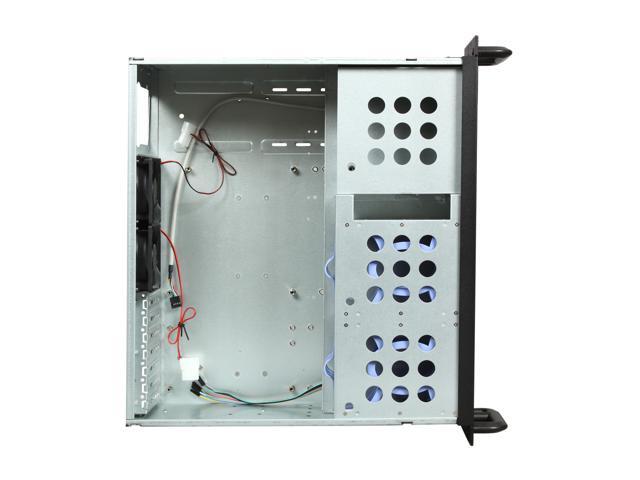 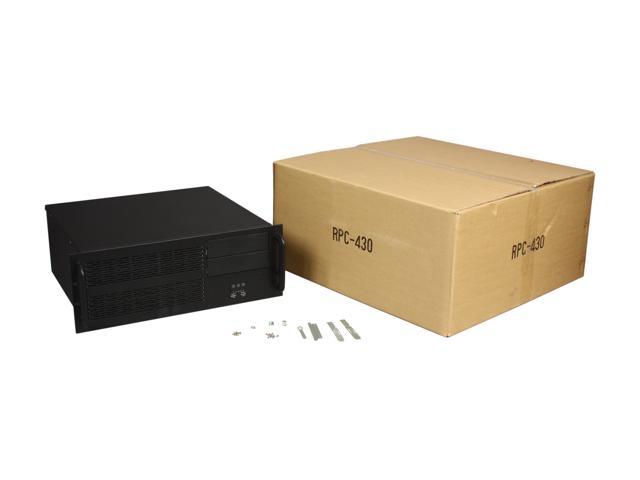 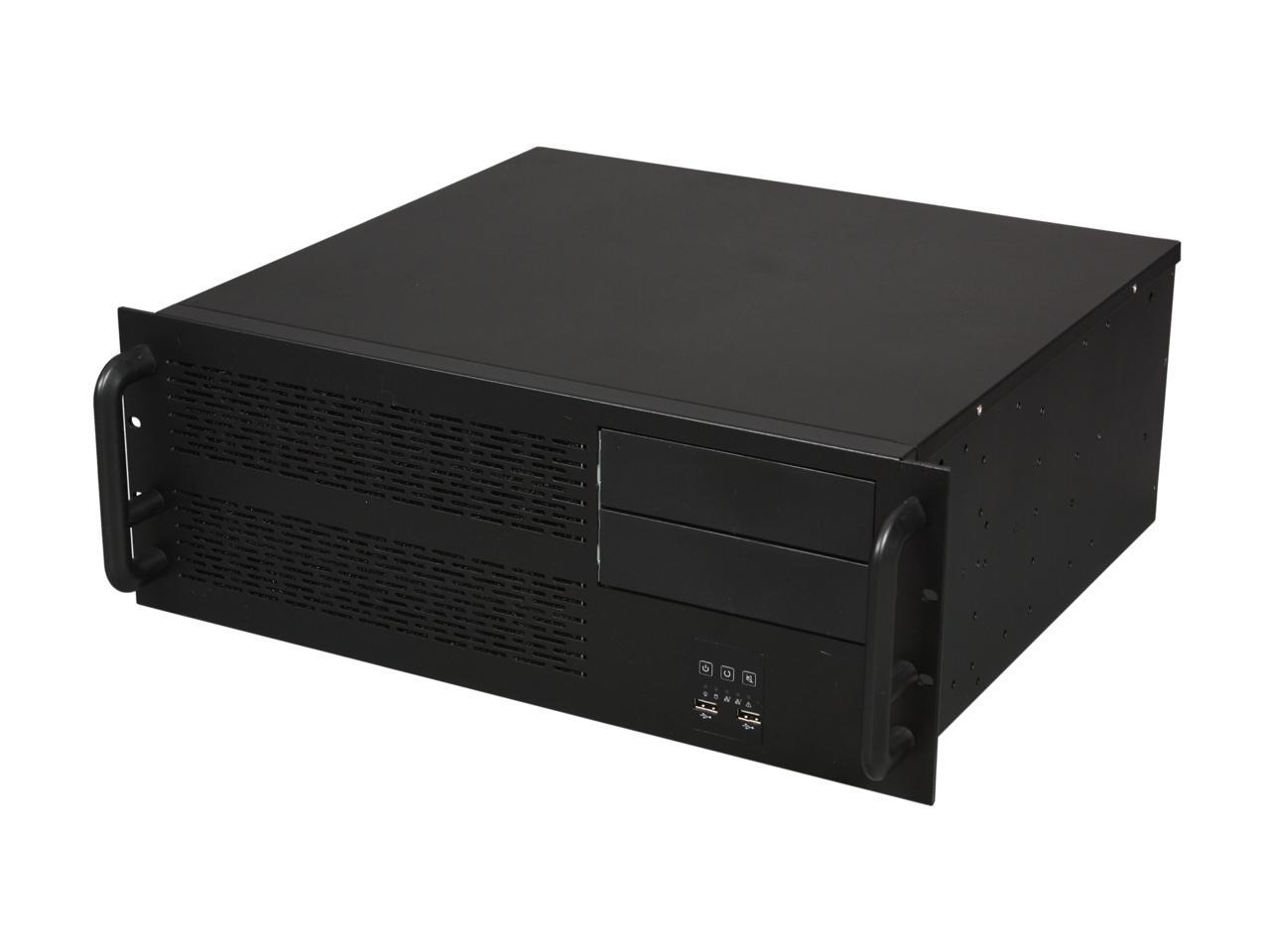 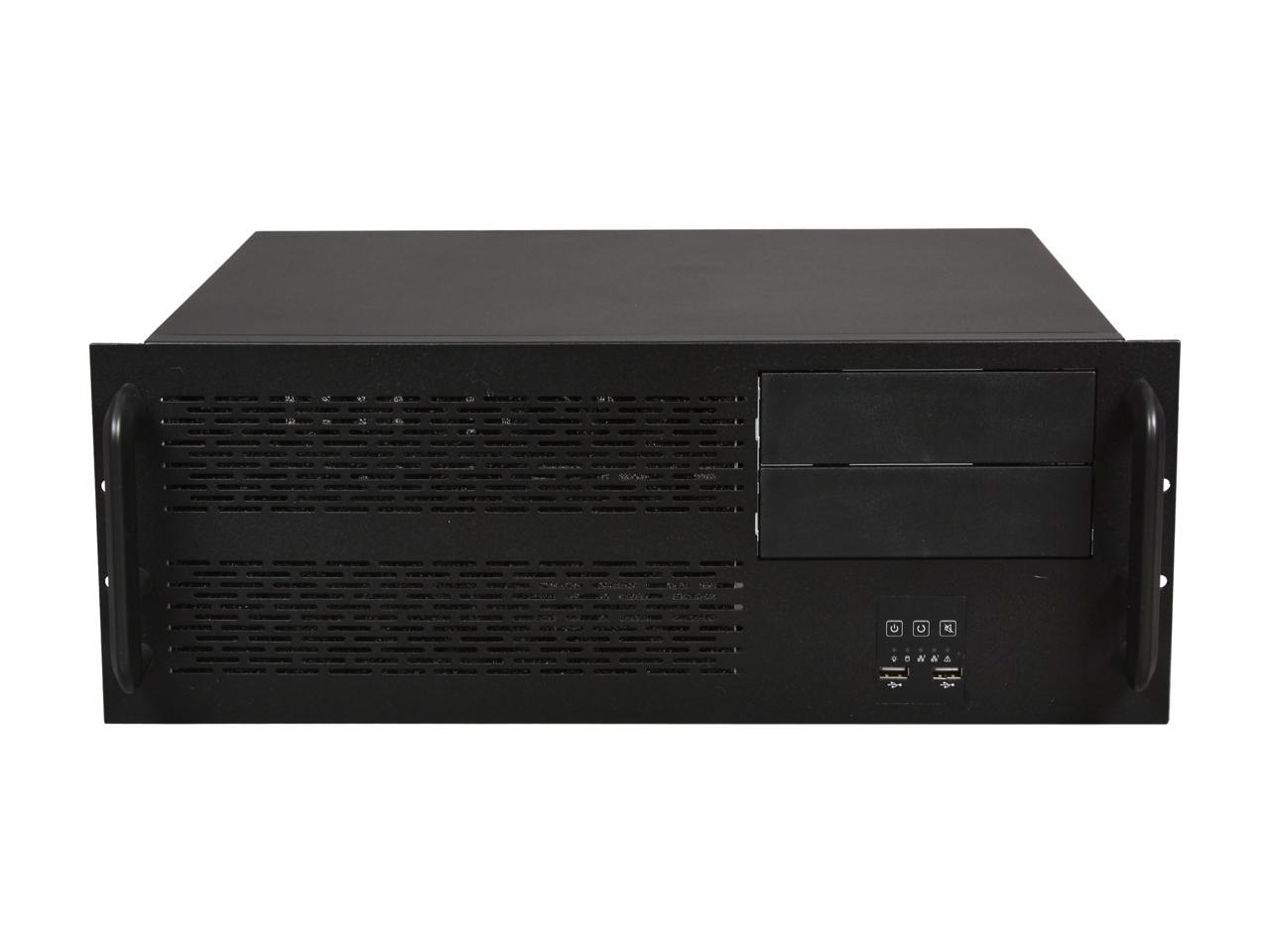 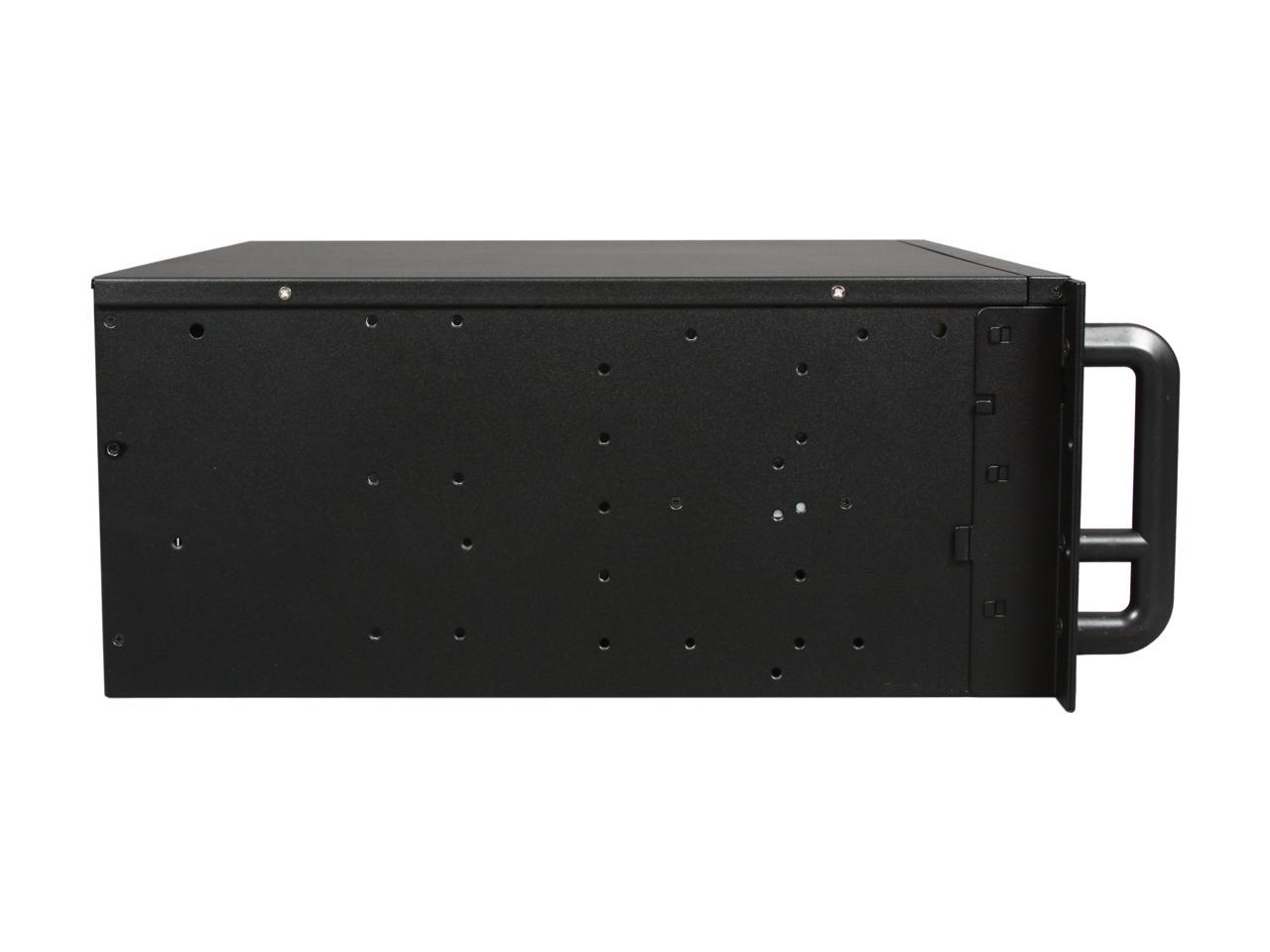 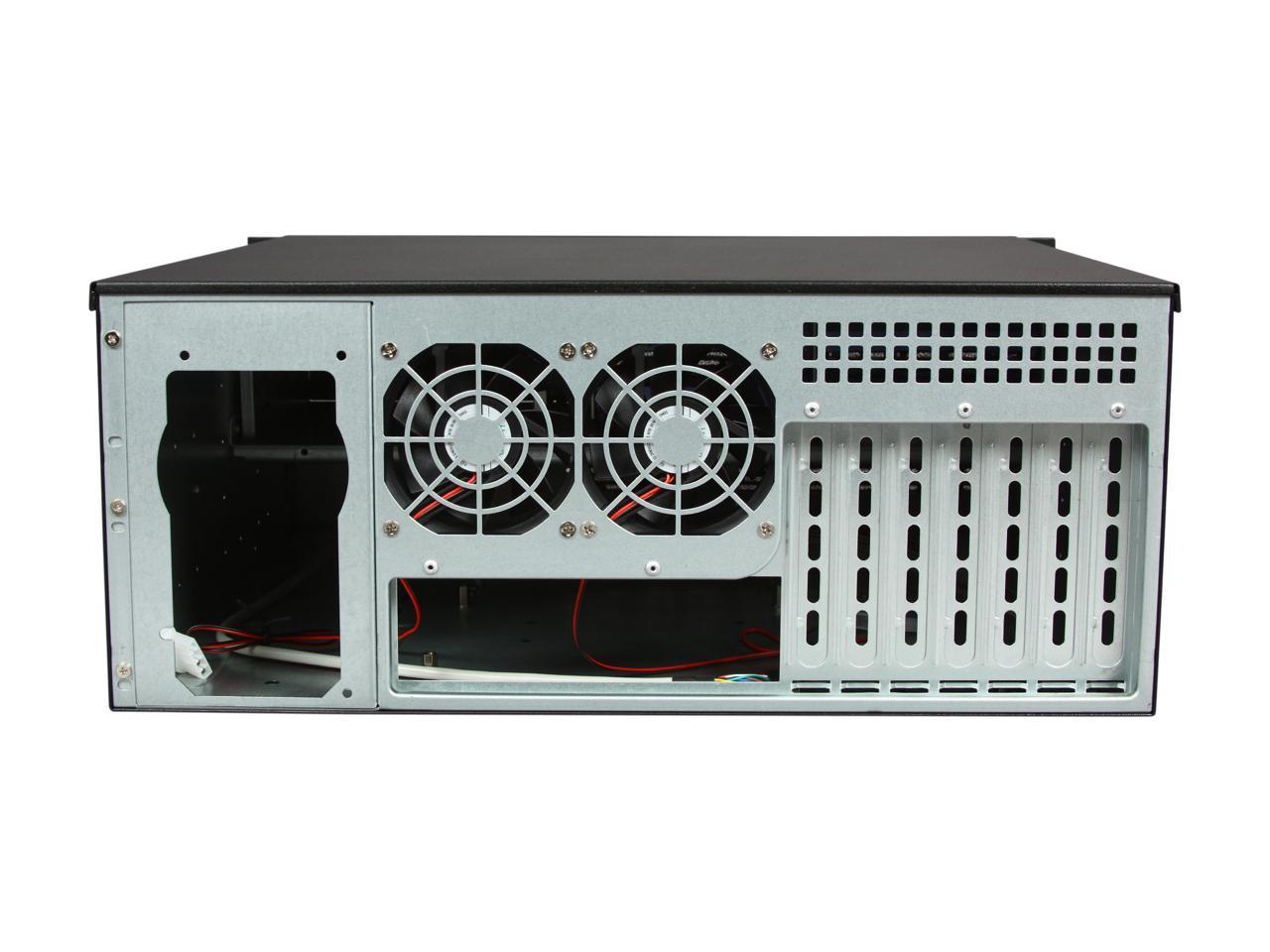 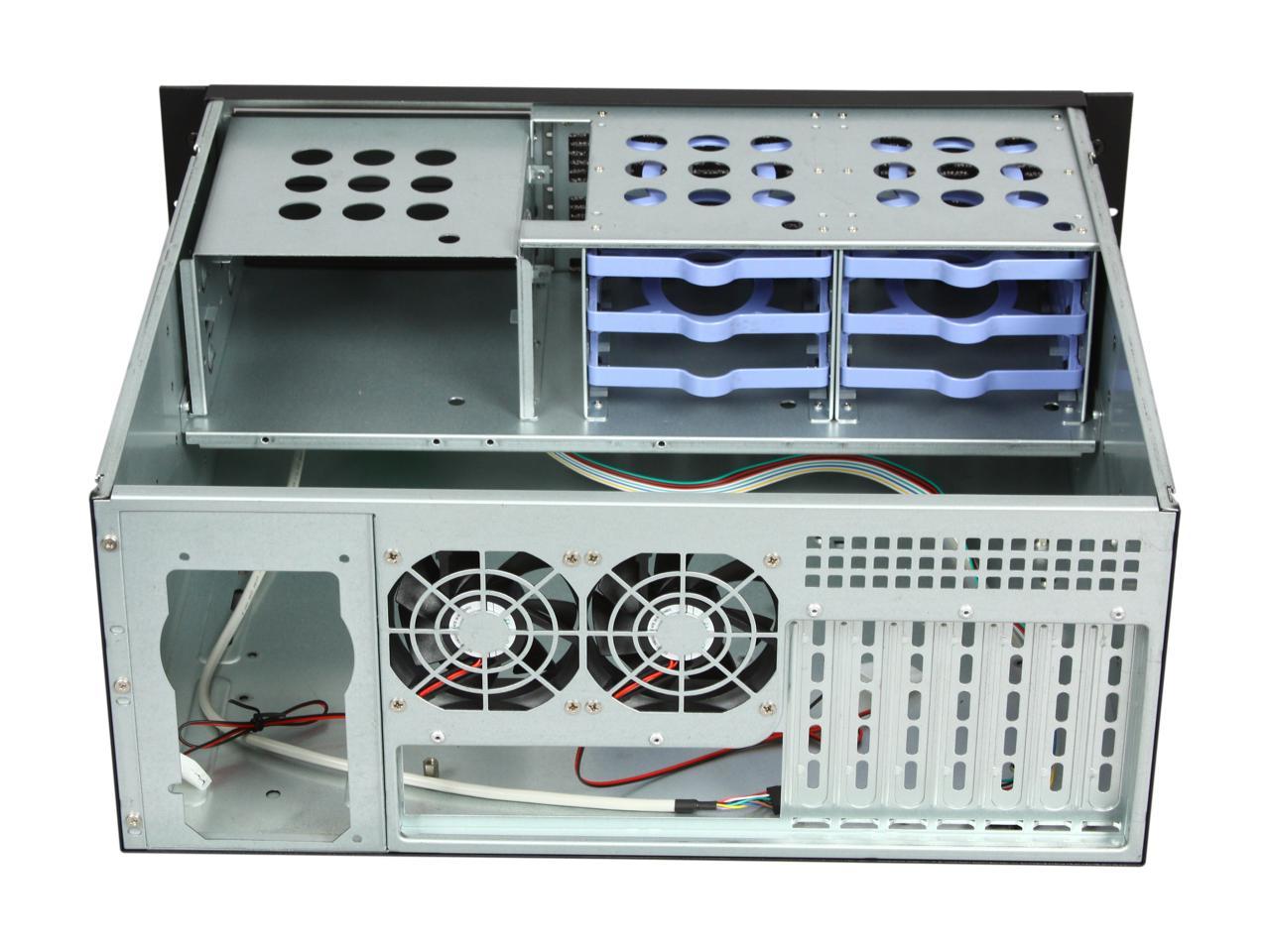 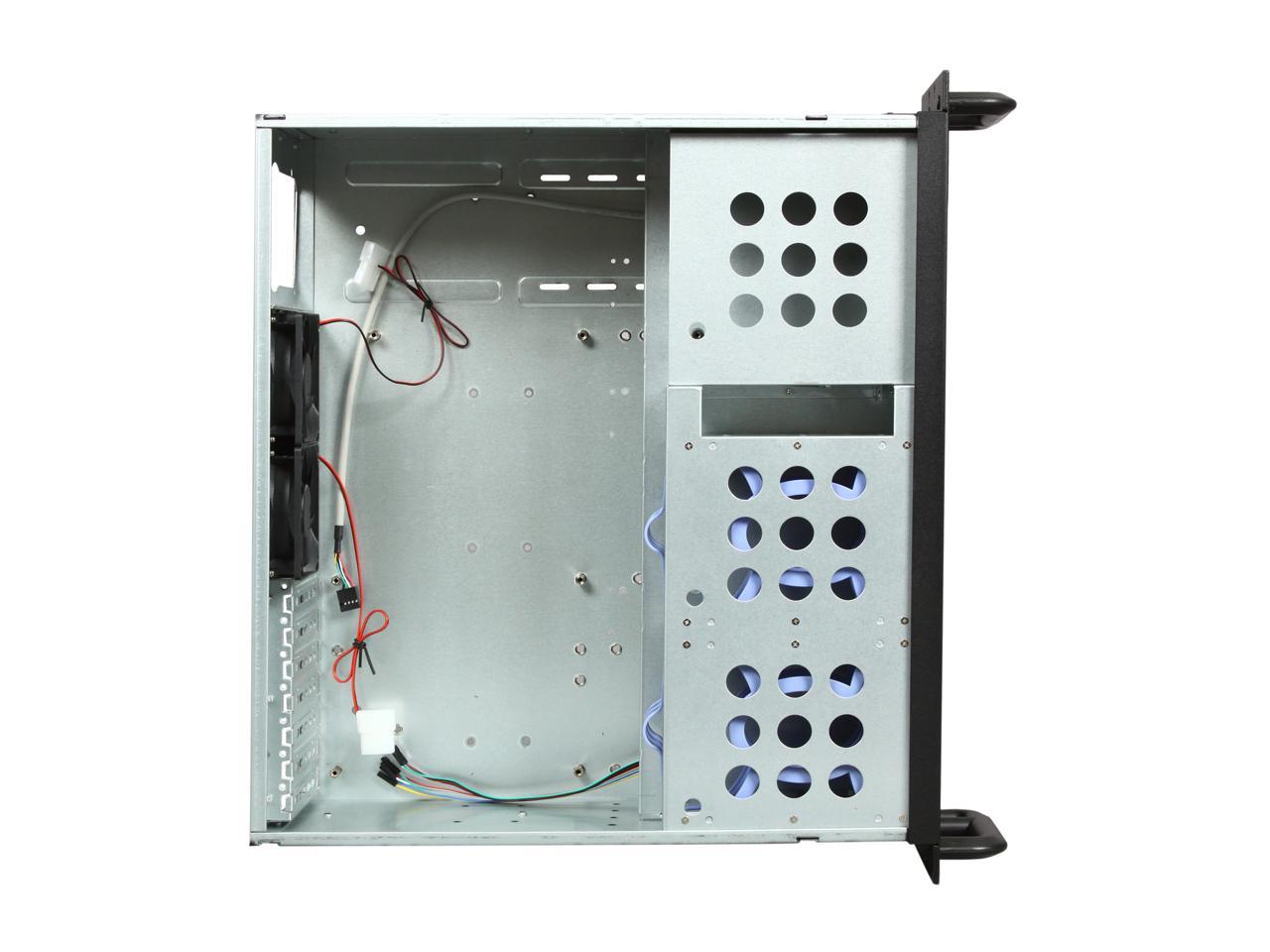 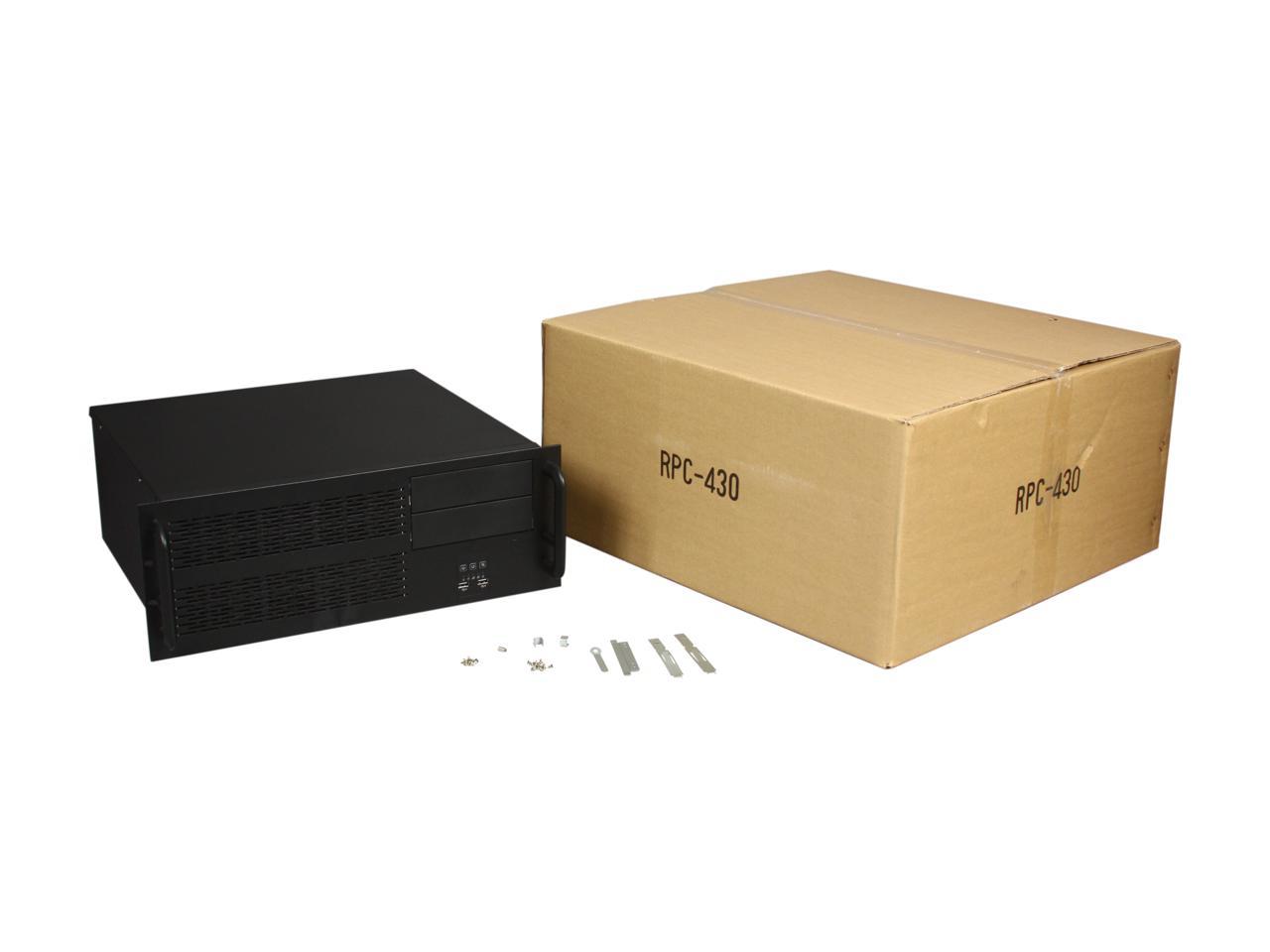 (88) Write a Review
OUT OF STOCK.
Overview
Specs
Reviews Pros: You are looking at this case most likely to: 1) You need a short depth rack case. Telecom racks are sort of popular in homes but being only 19" deep you are limited in the cases that can be used. 2) You need a solid shippable system. My need is #1, my home has a 19" deep telecom style of rack and thus full length rack cases are simply not possible. This is one of the VERY few server cases that fit into a 19" deep rack with enough space behind it for some venting. - Good price. - Many edges are rolled but still be careful when assembling so you don’t get cut. - Able to hold 6 x 3.5" drives without any tools via the included slide-in holder (internal access). - 2 x 5.25" for other uses. - Holds most board types. - Has holes in drive cage to allow full length motherboard to be secured (but you need a long screwdriver). - Front USB (2). - Front power/reset that is not easy to accidently hit.

Cons: - Many very small short screws - do NOT lose them! They are soft so don’t strip them out. - Front holes simply don't line up with rack mount perfectly (they are a tad too wide apart - maybe 1/16"). Be ready to get your drill out and fix that. - Existing front holes (2 per side, 4 total) are poorly placed, both bottom holes are too close to the handle making M6 rack bolts impossible to use. You can fix this by making new holes lower down. Given the weight of the completed system, I would recommend ignoring the bottom hole and drilling 2 new ones on each side, one above handle, one below handle, giving you 3 holes usable per side. - Front power/reset is not intended for high duty cycle - use with care. - With a heavy system, the overall mounting strength of the front should be improved. If you have ever used an APC smart UPS rack mount - you know what good engineering is. But this is low cost case so you can't expect perfection. - Not a gaming case - max pci card length is about 7.5

Overall Review: I built a raid 6 LSI 9265-8i based system with this case; it holds 8x3TB drives with the 9th drive a small SSD for the boot. Vantec has a 2x5.25" to 3x3.5" adapter which gives you the ability to hold another 3 3.5" drives. If you go that route (like I did) you will use a USB DVD drive. There are no fans for the drives, so if you are going to load up the drive bay with 6 drives, you will want to engineer your own fan bracket. I used some #6 threaded rods, tapped and threaded it into the end of the drive bay. This allowed me to attach 2x92mm fans to pull air across the drives. With this the max add-on card that will fix is about 6.5" but that is enough for the LSI raid card to fit. If you take off the back panel, it will make installing the motherboard much easier. If you find that you need to remove the drive cage - be prepared to spend a lot of time and DO NOT LOSE THOSE SCREWS. I hope that Norco continues to make this case; there are simply so few that can fit into this

Pros: * The short depth works well for small home racks (my intended use). * Plenty of 3.5" bays (6). * Front panel cables are sufficiently long to reach motherboard headers anywhere. * Back panel fans are quiet (somewhere in the 20 dB range). * Screw packs are labeled -- this may seem minor, but it saves a lot of installation headache when you're not trying to distinguish between motherboard mounts and power supply screws. * Inexpensive.

Cons: The manufacturer had to cut a lot of corners to hit this price point, and it shows: * Fair to poor mechanical tolerances. Trying to get the holes to line up after taking the drive tray out is a balancing act as you try to apply force in odd directions to get the screws in. (I've seen worse, but this is definitely below average.) * Screws are made of soft metal -- very easy to strip. * Screws are too short -- hard to get into the case especially with the poor tolerances noted above. * Poor finish. As soon as you start removing screws, flecks of paint start coming off and reveal bare metal. * Plastic handles. You will need to remove the handles to get at the drive trays. However, the screws which hold them in dig into the plastic itself (like how most case fans are mounted); each time you remove the screws, a bit of the plastic comes off. There are a limited number of times you can take the handles off before the screws won't be able to hold. * Odd rackmount hole configuration. There are two holes in the center on each side; if you put a lot of equipment inside, this will put a lot of stress on the rackmount rails at that spot. I'd expect at least four holes per side (which two at either end) for better weight distribution. * Installing 3.5" drives requires you to unscrew a centerpiece holder, remove a flimsy plastic carrier (which catches on every corner; very high risk of breakage in this step), seat the HDD into the carrier, then reinstall the carrier and centerpiece. I would've preferred the standard screws here. * Rear slot covers are not replaceable. * Installing expansion cards requires you to push the card in partway (the back edge won't seat correctly at first), then use a screwdriver to force the lip back into the case.

Overall Review: My main goal was to get a short depth rackmount case (small 16U home networking rack), so this rack ended up being adequate. I would have gladly paid $20 more to have some of the cut-corners remedied -- especially the poor mechanical tolerances, finish, and soft screws.

Pros: Price, air flow, and is quite sturdy.

Cons: A little cramped with 12x13 board.

Overall Review: After reading a few reviews, I believe I may save some trouble for home builders. Un-screw the handles, front plate, and drive cage (simple). You may now work like a gentleman.

Pros: One and only short depth case out there, which can fit a lot of HDDs. It is very good quality, very good airflow, very good layout for its depth. I do not understand, why people are rating this case low , because they have a hard time to fit. Buy a bigger case! This one suppose to be short and you WILL have issues with space. Tons of tiny screws? Excellent! Much better then a lot of tine welds, because you cannot do anything about those! It is very flexible case.

Cons: Sharp edges. Kind of used to it though. No big deal.

Overall Review: For my purpose I completely dismantled HDD cage a created a new one with vertical HDDs. I'm able to fit 14 x 3.5" HDD in now + 4 x 2.5 SSDs in add-on cards. I'm using it as file server.

Pros: As others have pointed out, this is a well-built case, and unlike many others, it uses screws on EVERYTHING, making assembly and modifications very easy. I have this case and its bigger brother (the 450) and both are excellent values.

Cons: If you have a long PCI/PCIe card (like a long video card or expansion board), it may not fit without modifying the drive cage mounts. If you are uncomfortable with this, I recommend looking at the RPC-450, which adds some extra room.

Overall Review: This is one of the best values for the money. It has become my "standard" for an inexpensive rackmount case.

2 out of 2 people found this review helpful. Did you?
Dave S.
Ownership: 1 week to 1 month
Verified Owner
Fairly well constructed enclosure, but there are things you should know11/27/2018 8:59:31 PM

Pros: Decent construction, pretty solid. 4U so it's big, would have preferred 3U but power supply makes that difficult without cutting off access to PCIe slots. For those mechanically inclined disassembly and reassembly is not too difficult. Long shaft #2 Phillips screwdriver makes life much easier.

Cons: Does not support a typical SD drive form factor. 6 SATA disk drives + 2 SATA CD or other drive bays. Carrier for the SATA drives are pretty lame. Want to put a high performance video card in, Better make sure it's not too deep. There is a 8" depth limitation. Difficult to get at SATA and other connectors under the drive shelf when using full ATX motherboard. Screws are super tiny and short, easy to loose. CD/Other drive bay covers (front cover plates) are pretty cheap and lame.

Overall Review: Given the right application I would buy this product again. Idea I had was for a hybrid system of a few disks (not 6 but 3), screaming Graphics processor/card, and video capture cards. For the most part (with modification) the goal was accomplished, but for the video card. (8" depth limitation)

Pros: So you painted yourself into a corner and now you need a short depth rackmount case that will fit into an audio rack. This is just about your only option. It is well built and I had no issue with incorrect stand-off height or mismatched holes. My only issue was that the CD rom drives seem to be held in only by friction. There are some stamped metal pieces to attach to the drives, but they don’t lock the drives in. The HDD trays work fine. You will need to basically disassemble the case and the reassemble it around your mobo. You can fit a full length video card only if you are handy with a dremel and willing to lose two HDD spaces. There are no instructions and basically no screws are included. The usb front panel includes both a 2.0 and 3.0 plug. Only use 1. If you plug in both the panel won’t work.

Cons: Read above for full review