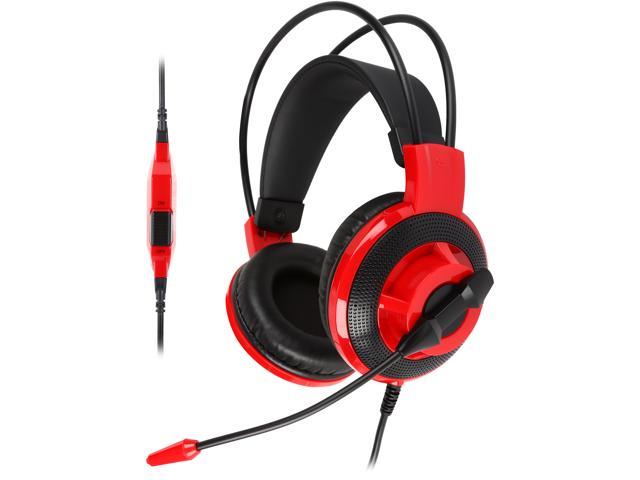 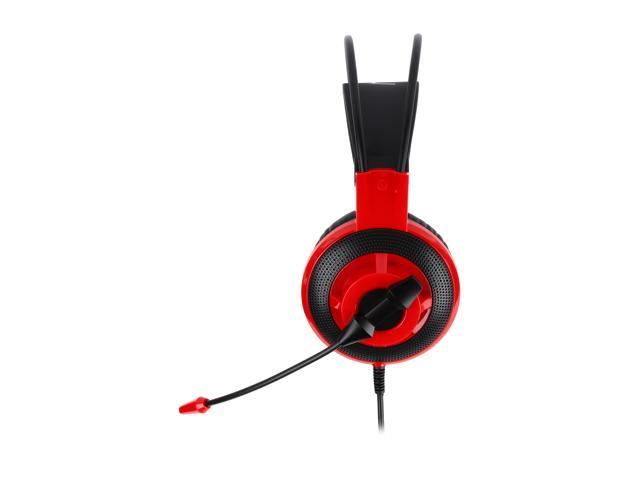 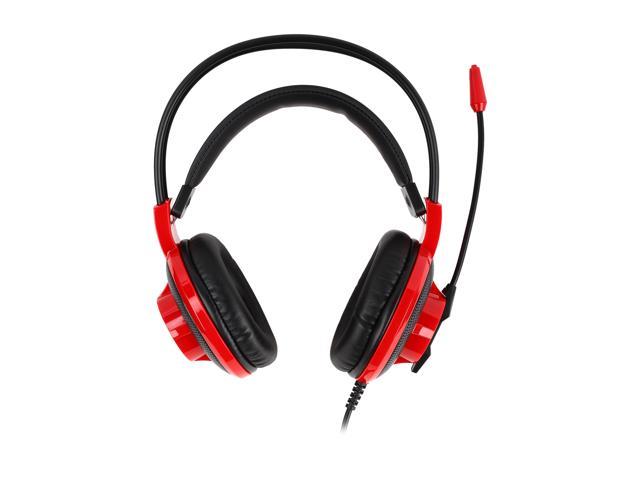 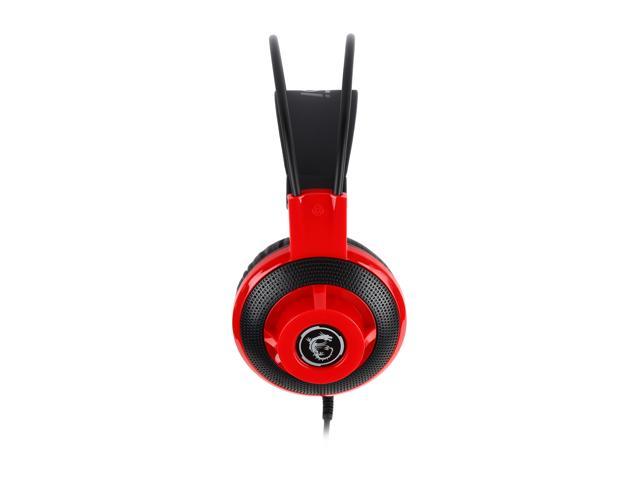 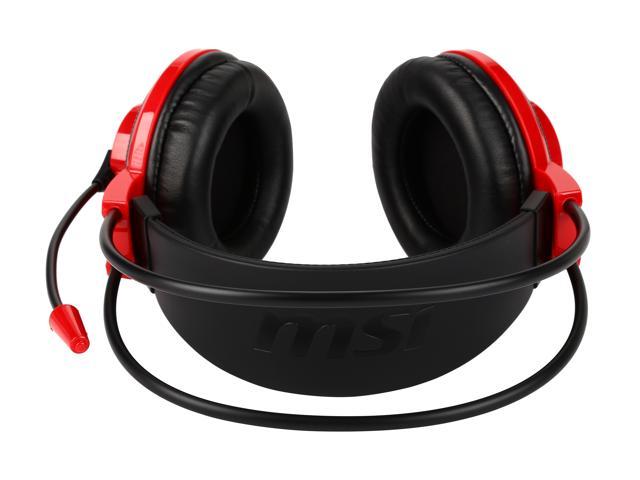 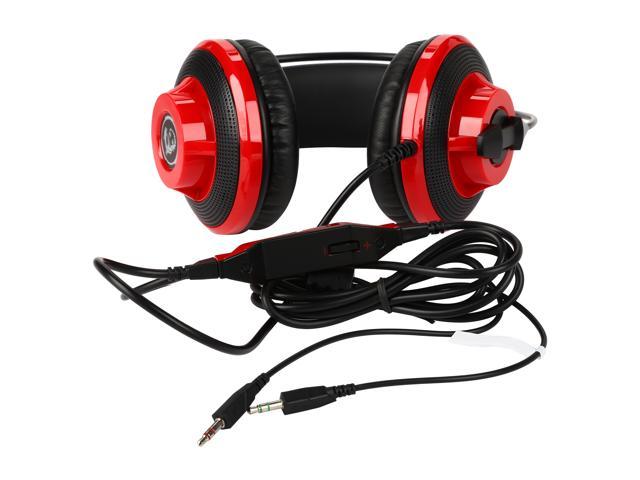 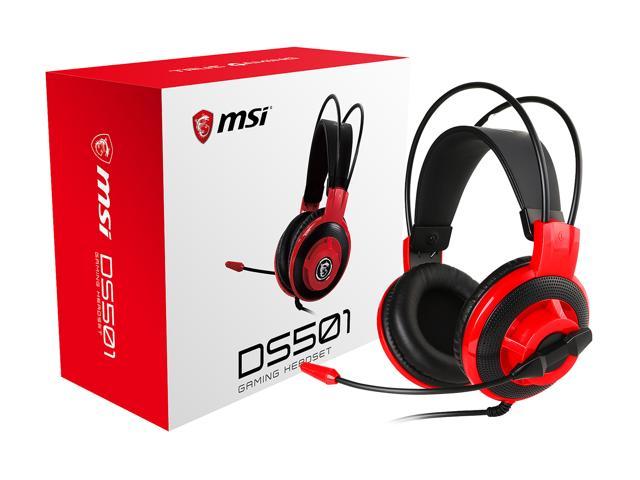 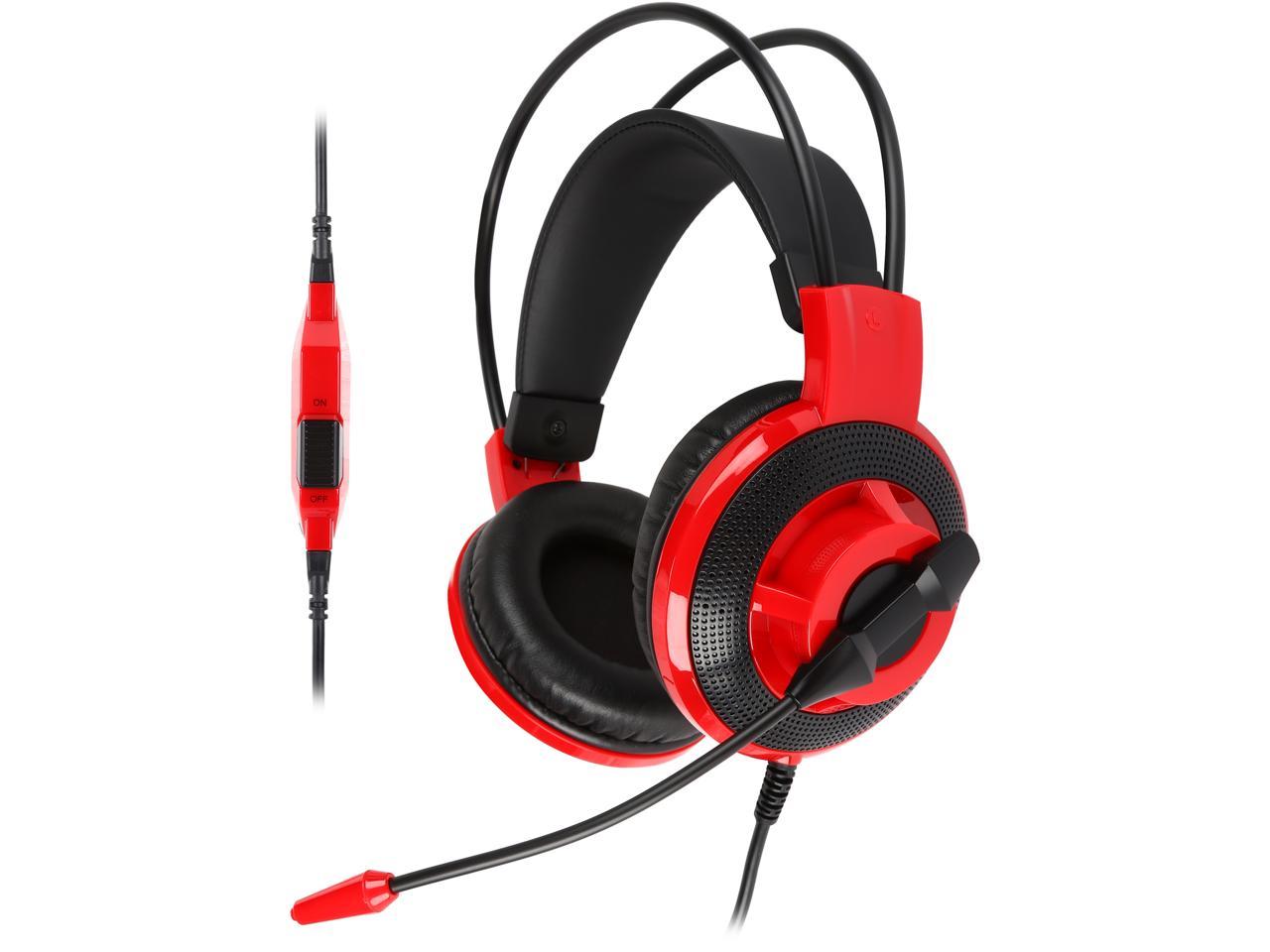 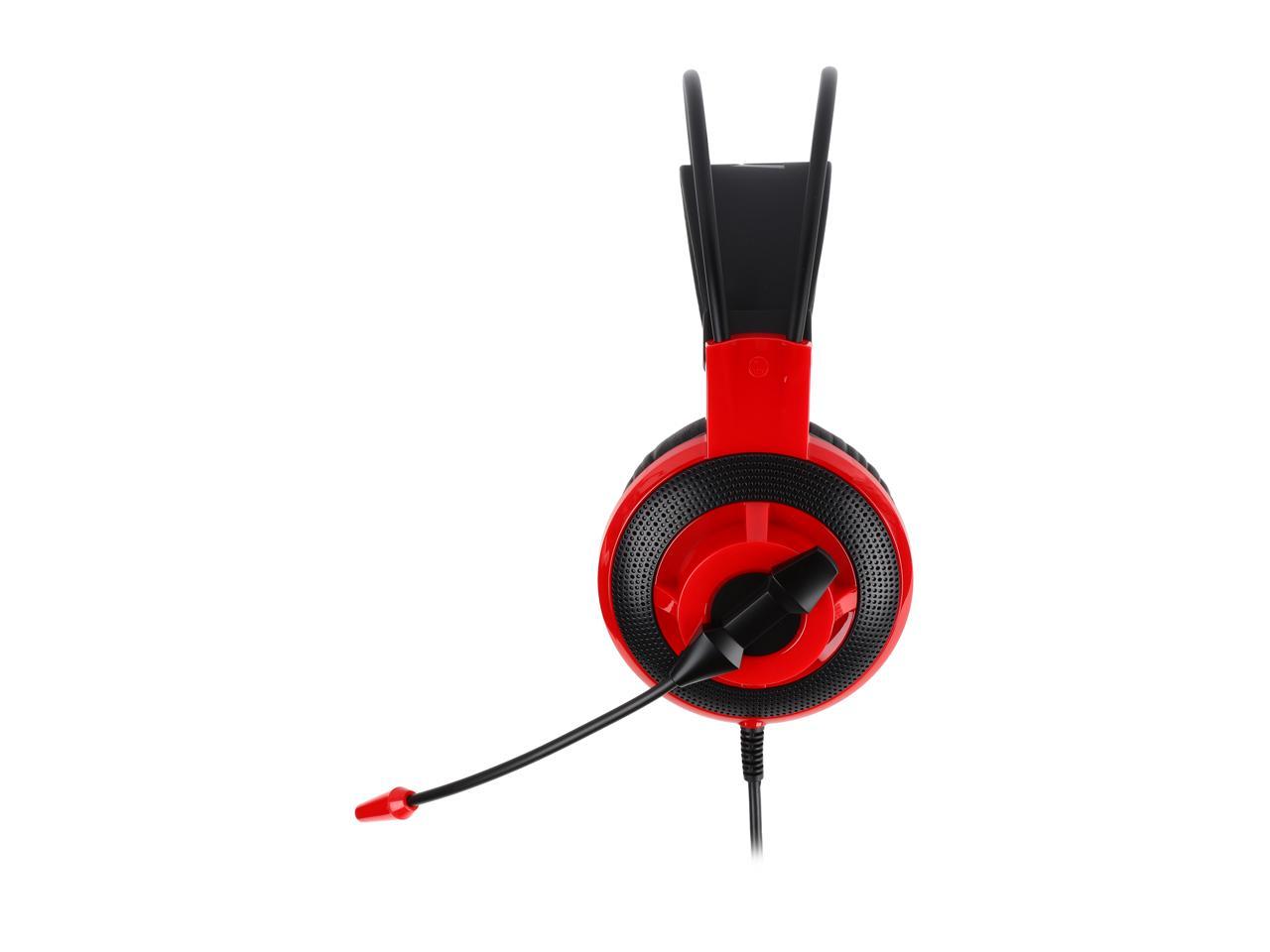 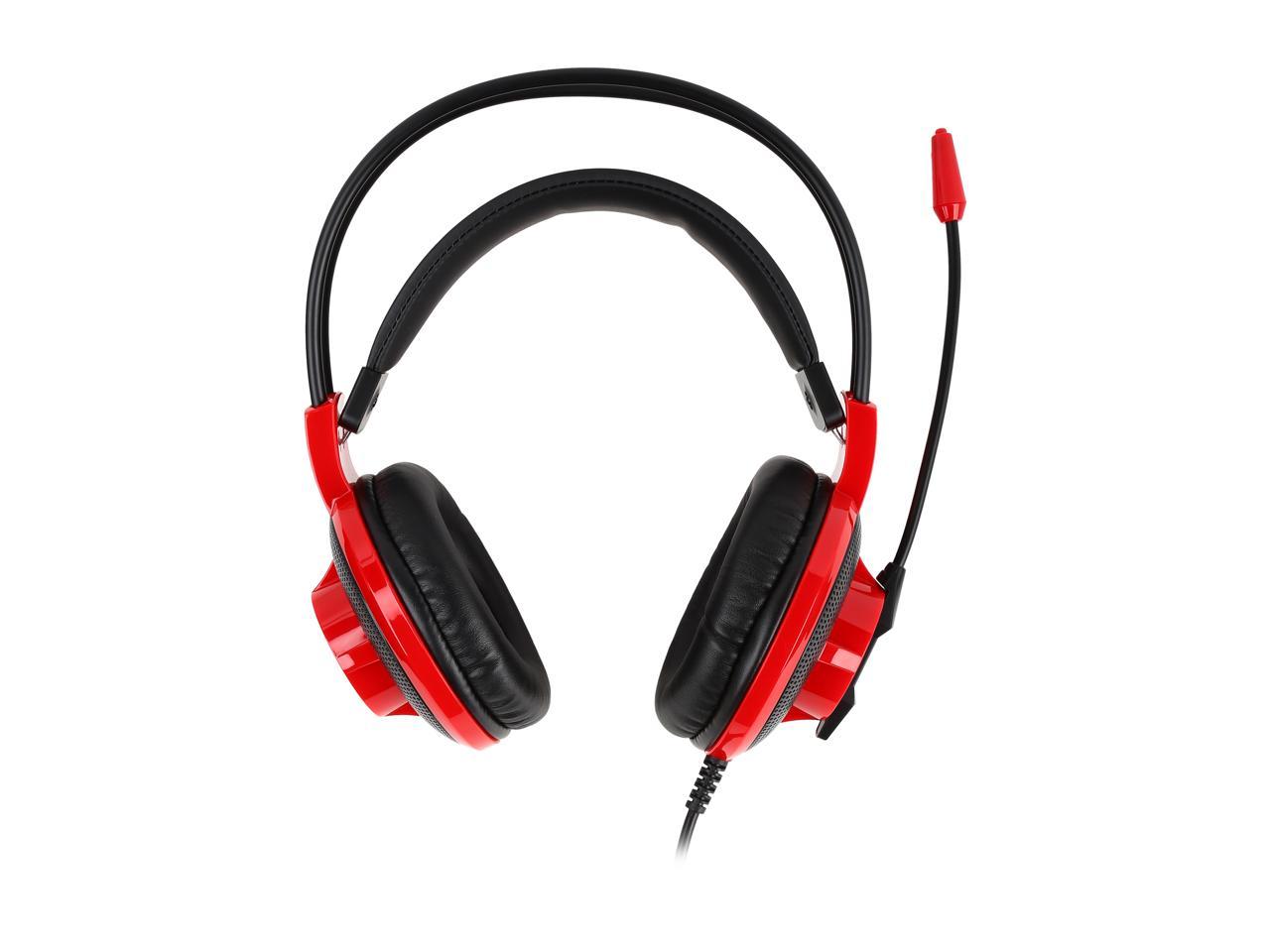 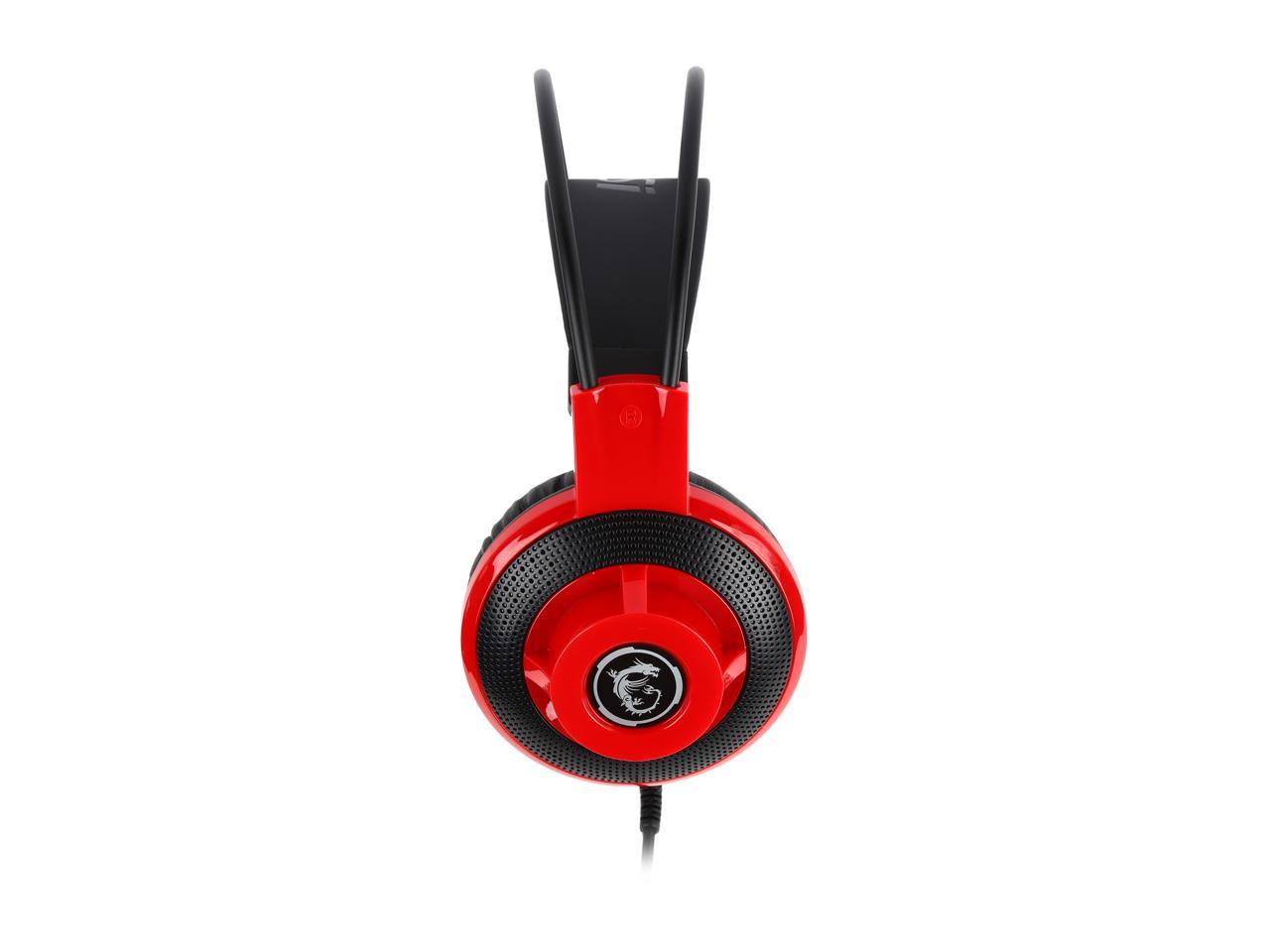 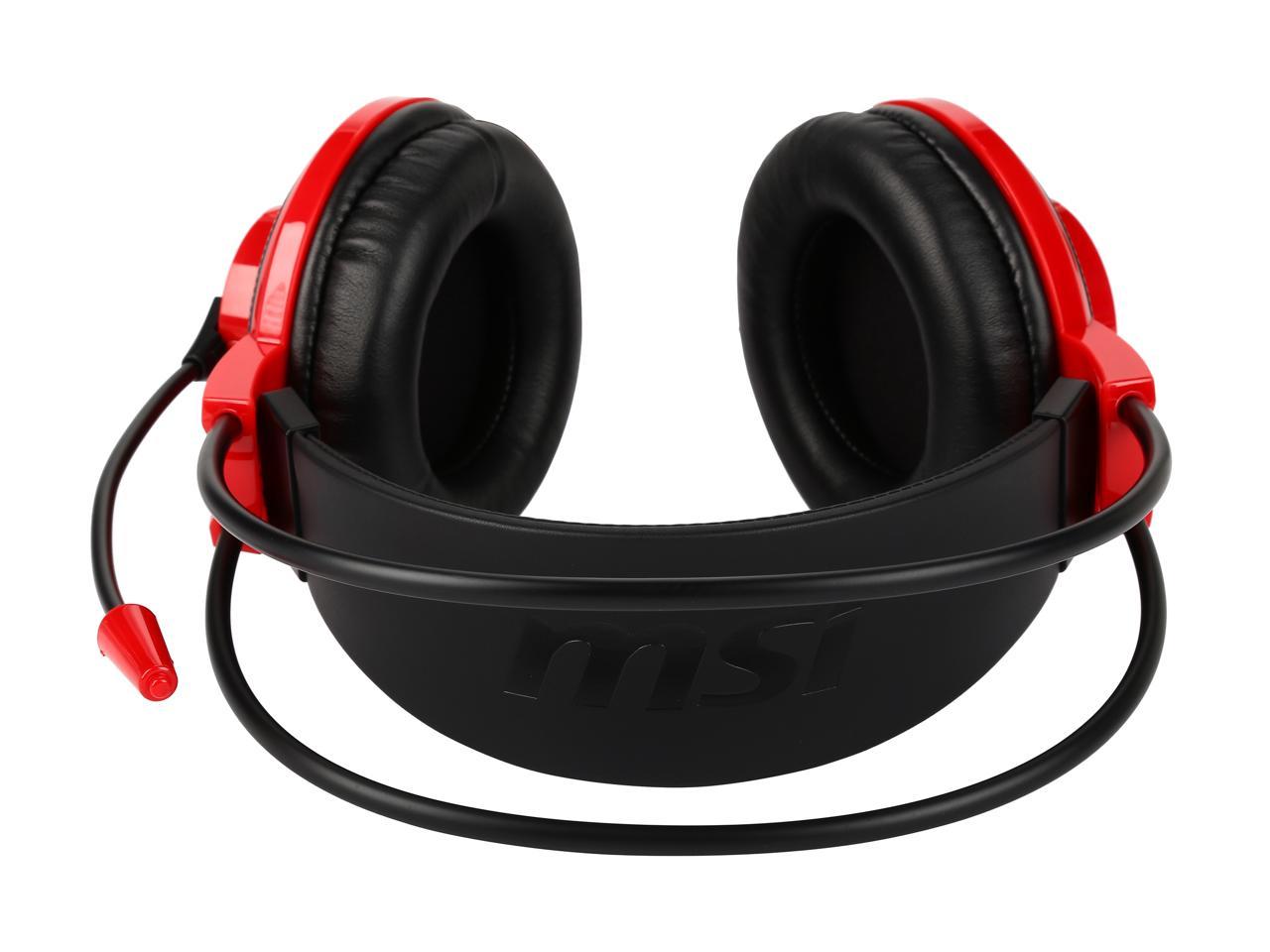 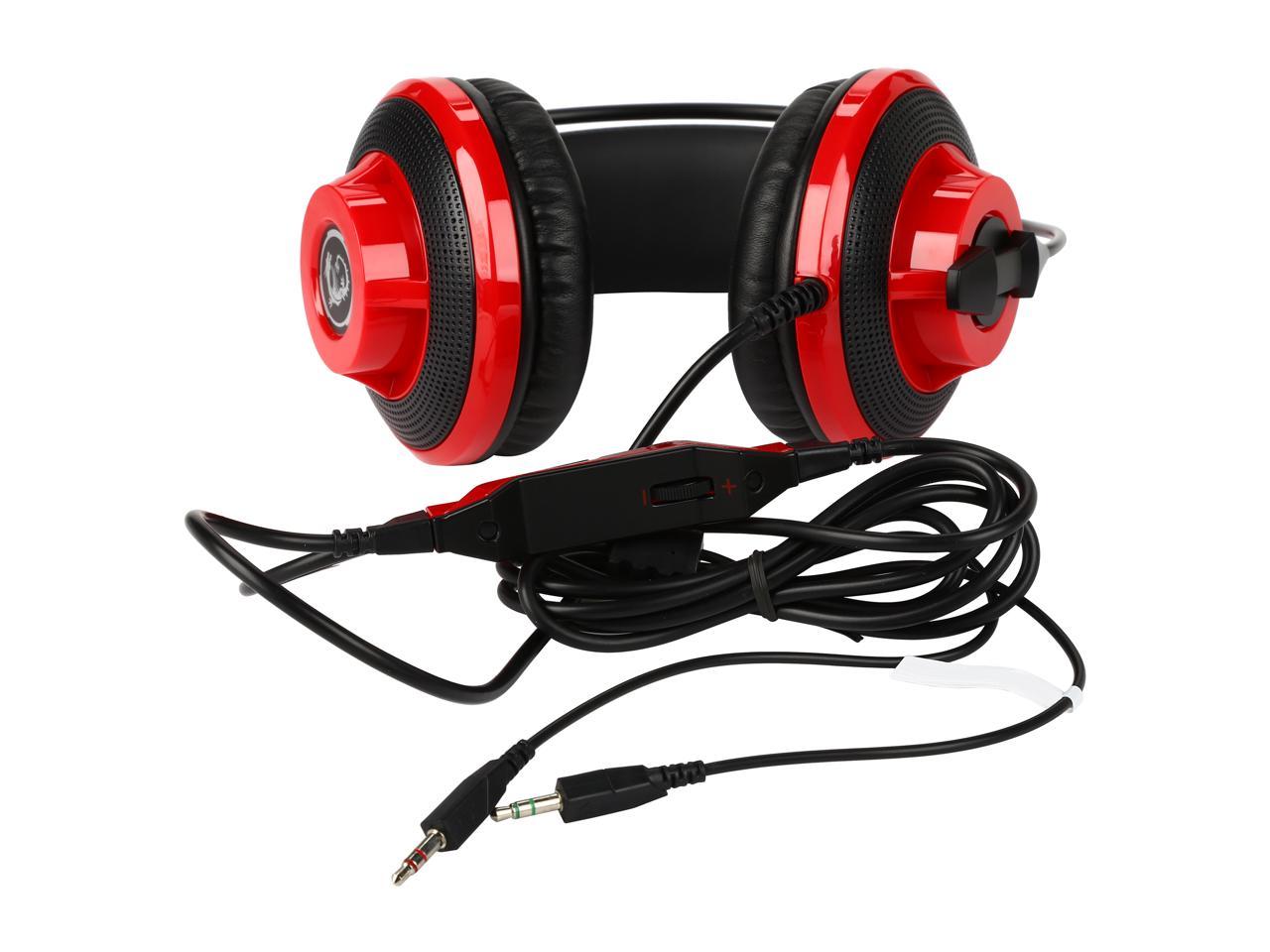 The MSI DS501 is a stylish gaming headset built for victory. Two large 40mm drivers reproduce high-quality in-game sound with rich details across the full range while passive noise-reduction gives ambient noise no chance to sabotage the sound purity. It is easy to win as a team. You only need to adjust the omnidirectional microphone to your mouth to pick up your voice clearly. Tune in-game audio up/down and turn microphone on/off easily via the included inline remote control. A lightweight and self-adjusting headband offers secure fit and enduring comfort for extended gaming sessions. DS501 Gaming Headset is comfortable on your head and ears for extended gaming sessions. Its fully adjustable headband and closed ear cups with plush padding ensure a perfect fit every time Learn more about the MSI DS501

Cons: -looks a little cheap - but i wont knock an egg off for it

Overall Review: - As an audiophile, I would not recommend these for music, but they're great for gaming

Cons: -the mic is awful, needs to be boosted in order to be heard

Overall Review: do some more research

Manufacturer Response:
Dear Valued Customer, Thank you for sharing your experience with the MSI product! If you ever require technical assistance, please feel free to contact our technical support department directly at 888.447.6564 from M to F, 5am to 4am Pacific Standard Time. Thanks for choosing MSI! Best Regards, MSI Review Team
Caitlyn H.
Ownership: 1 month to 1 year
Verified Owner
Sounds fine, but...8/18/2021 3:37:47 AM

Cons: Cheap build quality Uncomfortable, ill-suited for extended use Does not stay in place well

Overall Review: I bought this headset as an urgent replacement for working at home after my previous headset failed. Despite a design that appeared quality, it has a cheap feel and design that makes for truly getting what you pay for. The headset kept sliding around on my head, requiring frequent readjustment, and even at that was painful to wear for more than an hour at a time, making it very much unsuitable for work at home use, never mind gaming.

Manufacturer Response:
Dear Caitlyn, Thank you for sharing your experience with the MSI DS501. We certainly value your feedback and please accept our sincerest apologies for any inconvenience you have experienced. If you have any further questions regarding this product or have any suggestions for improvement for us, please do not hesitate to contact us directly at usrma@msi.com and we will be more than happy to assist you. If you would like further technical assistance, please feel free to contact our technical support department directly at 626.271.1004 from M to F, 9am to 6pm Pacific Standard Time. Thanks for choosing MSI! Best Regards, MSI Review Team | usreview@msi.com
Anonymous
Ownership: 1 week to 1 month
Verified Owner
Great headset for the price10/30/2019 1:41:35 PM

Cons: If you have big ears, the cups are on the small side. Likewise if your head is big, the band might be too tight. I have an average sized head and ears, and it's snug.

Overall Review: I got this to replace an older, much more expensive, headset that was literally falling apart. Was concerned about what I'd get for the price and was pleasantly surprised.

Manufacturer Response:
Dear Joel, Thank you for sharing your experience with the MSI DS501 Headset! If you ever require technical assistance or warranty support, please feel free to contact our technical support department directly at 626.271.1004 from M to F, 9am to 6pm Pacific Standard Time. Thanks for choosing MSI! Best Regards, MSI Review Team
Brandon R.
Ownership: 1 week to 1 month
Verified Owner
Never buy from this company unless you want to waste your time and money1/23/2019 12:01:10 PM

Cons: i didn't even get the freaking headset and its been 15 freaking days, its infuriating how long it took them to pack it as i am typing this out, it has been 15 days since i order this headset and they still have yet to pack it. wall scrolls i order from Japan arrive soon then this thing

Manufacturer Response:
Dear Valued Customer, Thank you for sharing your experience with the MSI product! We recommend reaching out to Newegg directly in order to investigate why it's taking them (or a third party vendor) so long to ship the item out. Maybe expediting the shipping would have been a good option at checkout. If you ever require technical assistance, please feel free to contact our technical support department directly at 626.271.1004 from M to F, 9am to 6pm Pacific Standard Time. Thanks for choosing MSI! Best Regards, MSI Review Team
Matthew C.
Ownership: 1 month to 1 year
Verified Owner
A bit of a let down12/20/2015 4:46:28 AM

Cons: Bought 2, both had audio connection issues one both PC's they were used on. bad crackle, in and out audio, inconsistent, had to angle both cords JUSSSSST right to get them to work, but if they moved, both audio and mic had problems. If it was just one defective headset, thats one thing, but both had problems. I was very disappointed as I normally stand by MSI, and even at the lower price I would have expected their product not to be such a bomb. Fits the head awkwardly. (You could say I have an awkward head but if you get them you will see thats not what I am saying)

Overall Review: I would not recommend this, check out Gamdias HEBE, its a more comfortable fit, sounds better, havent had the same problems, around the same price point.

Manufacturer Response:
Dear Matthew, Sorry to hear about the issue you reported. If you have any questions or concerns regarding the product, please do not hesitate to contact us directly at usreview@msi.com and we will be more than happy to assist you, thank you. Thanks for choosing MSI Best Regards, MSI Review Team | usreview@msi.com