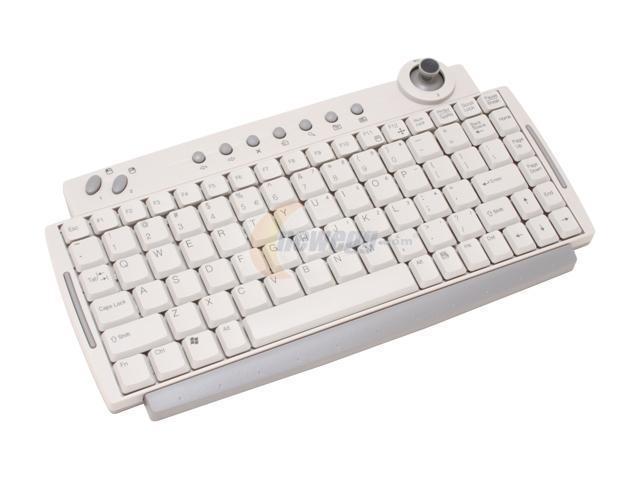 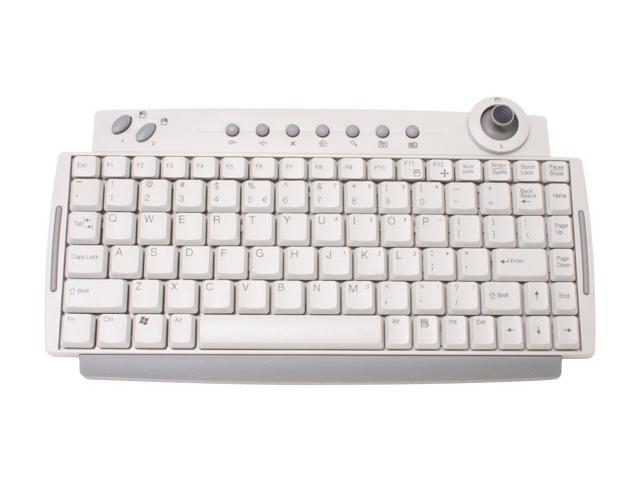 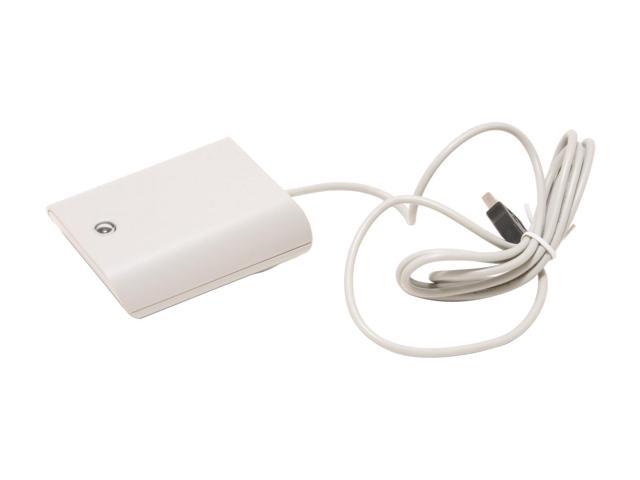 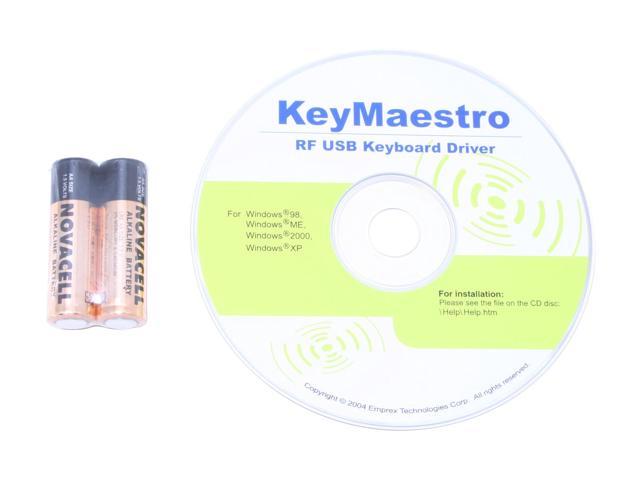 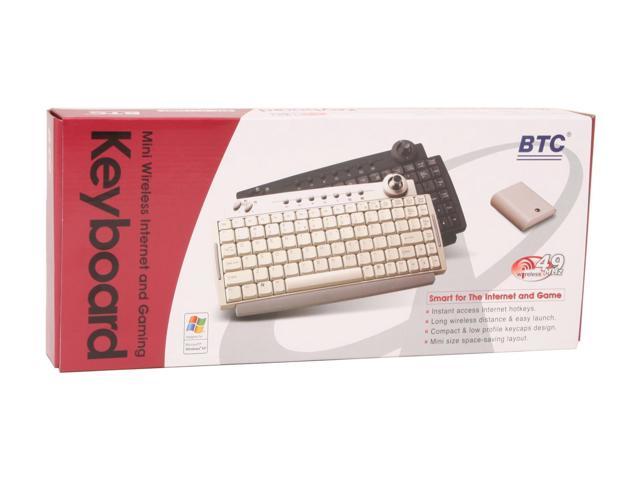 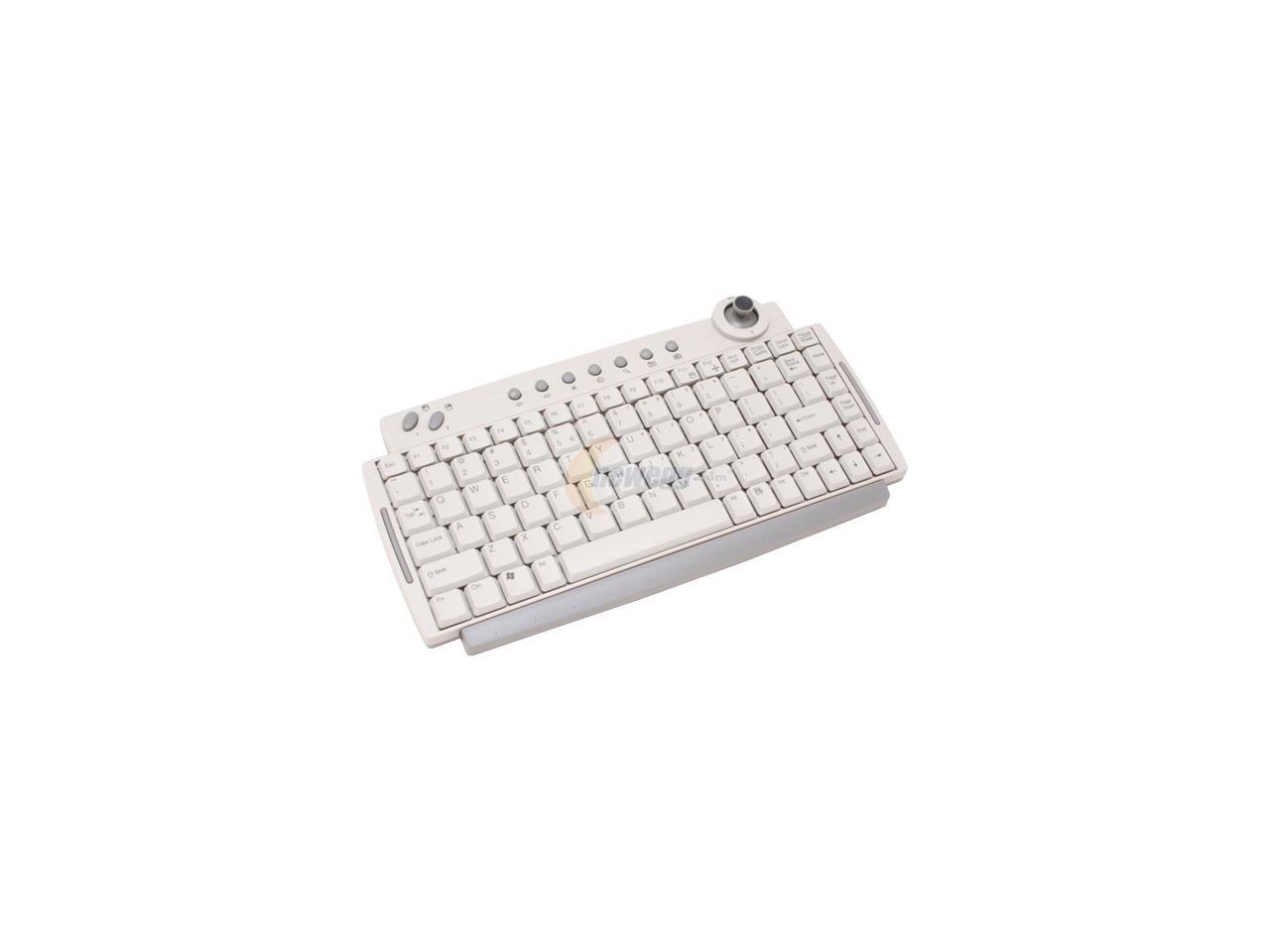 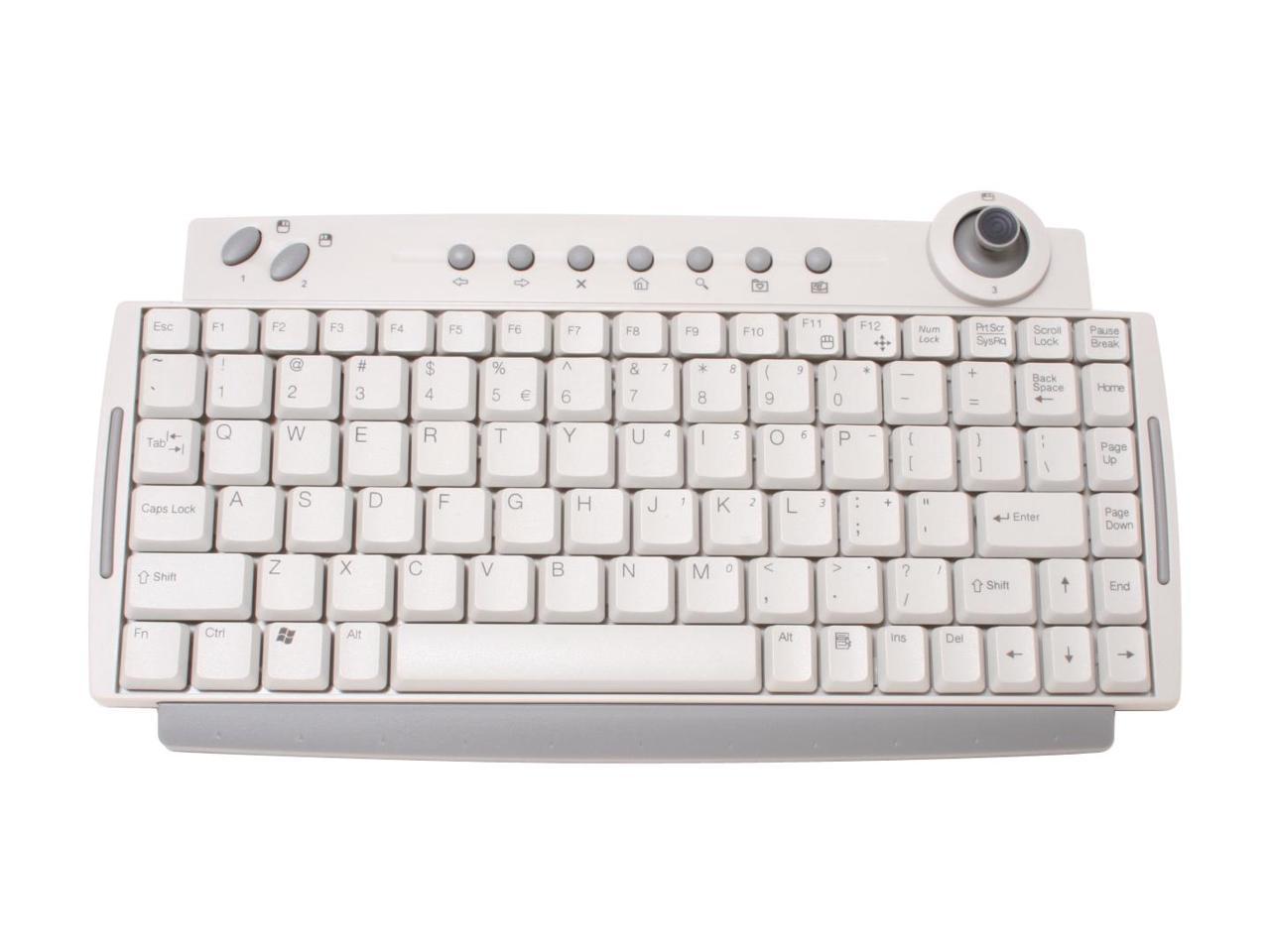 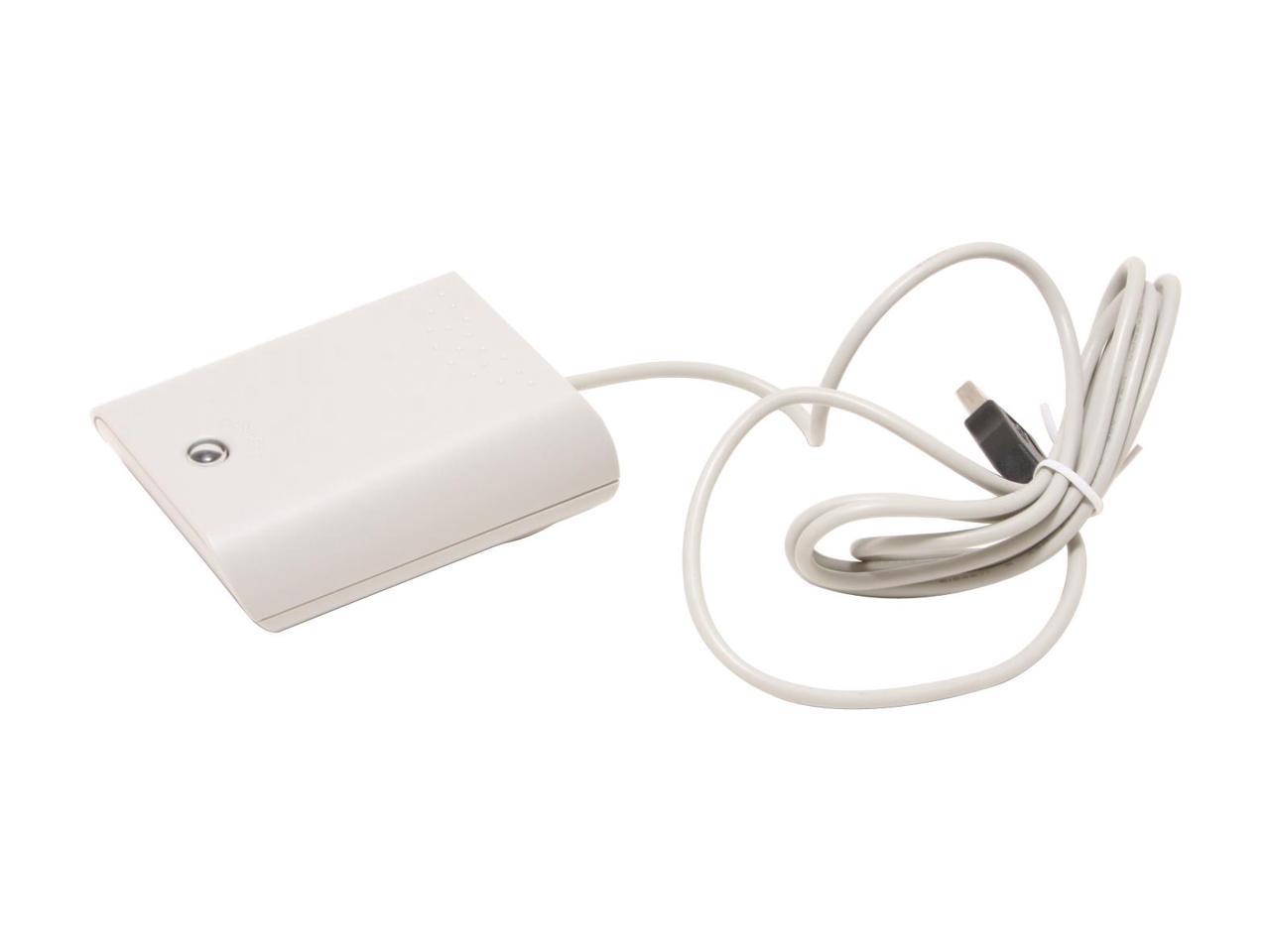 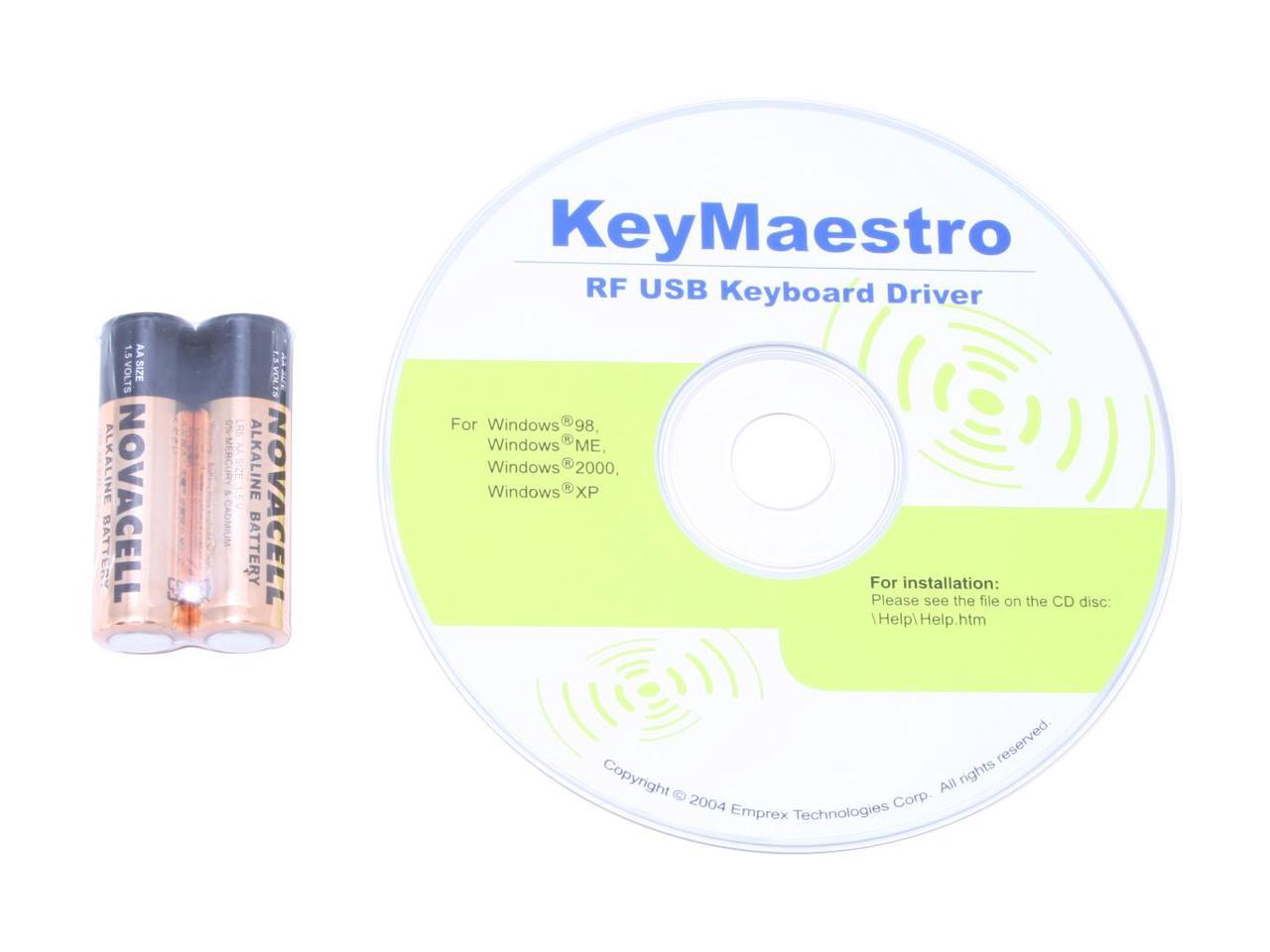 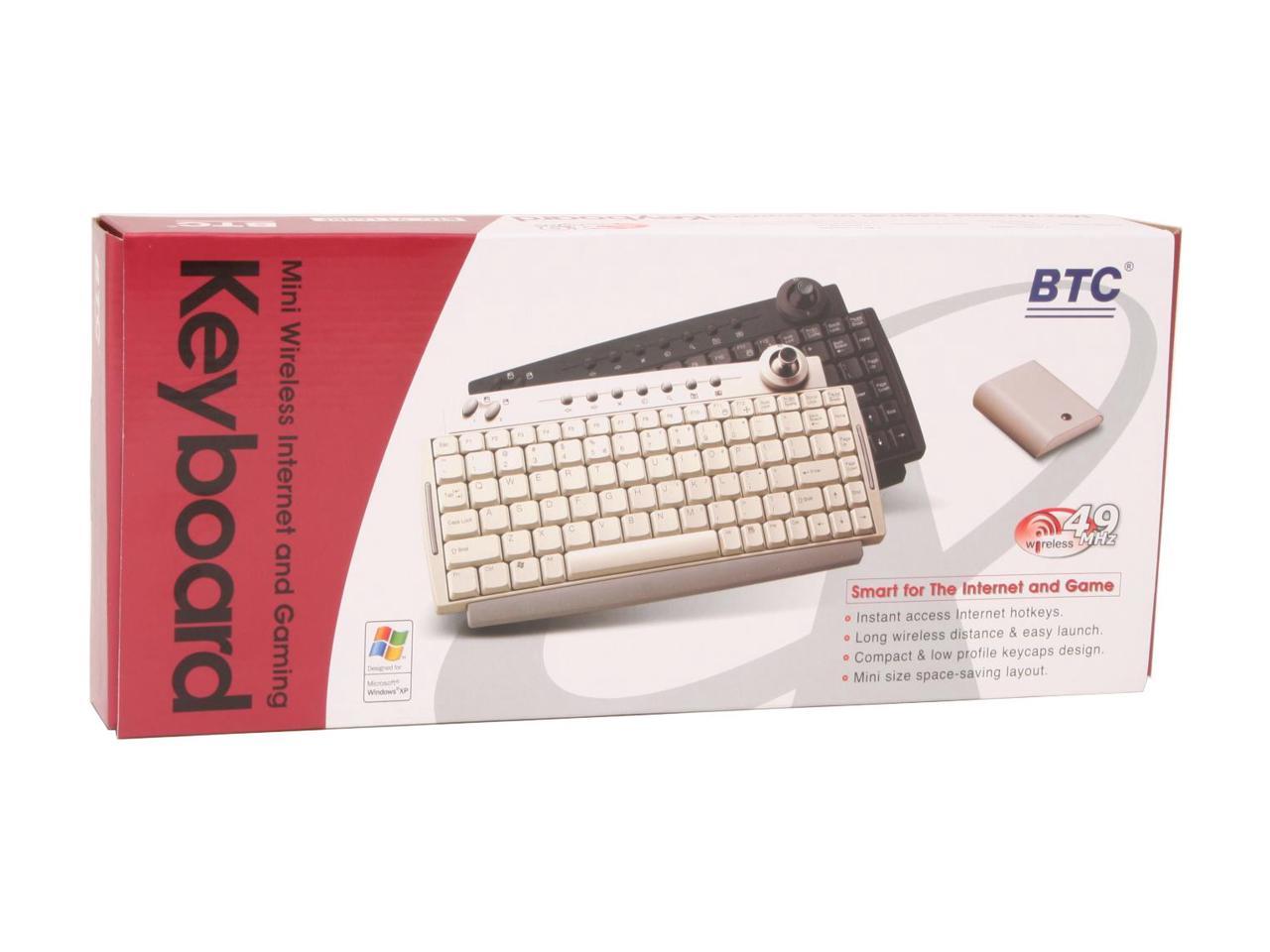 Learn more about the BTC 9116URF

Pros: The "mini" size is convenient. Keys are comparable to a laptop's, with a little more travel. Chassis is rigid enough to balance on a knee if necessary. Built-in joystick mouse can't get lost, and is convenient for use on a couch or easy chair.

Cons: RF link didn't work until I figured out the radio pattern. See Other Thoughts. Key surface texture is kind of rough for fast typing. Joystick mouse takes getting used to, and probably won't do for mouse-oriented games. Didn't try joystick feature. Joystick doesn't always center, so mouse cursor is left crawling across screen. A tap stops it.

Overall Review: The RF pattern is peculiar. Strongest lobe seems to come out the top of the USB transceiver (XCVR). Range was nearly zero with the XCVR up high on top of the monitor. Better with XCVR on floor. Best on floor with top of XCVR tilted towards couch.

Pros: Got this keyboard hoping that it will work well with my Xbox 360, and it did. Using it for typing in of private messages in Live!, as well as for things like naming pinatas in Viva Pinata. Very comfortable and inobstrusive when used on a lap, whether sitting on a couch or in a lotus position on the carpet. Quet design that matches Xbox 360, even. Excellent quality, decent materials, robust construction, overall solid feel.

Cons: Range is lacking, as other noted, prompring me to ding the review down to 4 stars. However propping the receiver upright does improve it to a point where I can use the keyboard wherever I want to in the living room. The tactile feedback from the keys is a little too resilient and rubbery, requiring a little more force to register keystrokes than a regular desktop keyboard.

Overall Review: A very nice deal. Can't comment on the mouse "joystick" functionality, since it isn't necessary for Xbox 360 anyway.

Pros: It's a smaller keyboard, near the size of my laptop. It works in the room but not around walls. I can get like 15' of distance and still have great reception. I like it a lot.

Cons: Cannot go through walls if thats your thing

Overall Review: WATCH OUT for New Egg! Right after I clicked the buy button the delivery man was dropping off the package. Fast as ever Thank you New Egg :D

Pros: Worked right out of the box on Ubuntu Edgy, didn't have to load drivers. Compact. Extra keys to map if you really want to.

Cons: None really. I don't do a lot of typing on it, but using it as a MythTV remote, I haven't had one problem with it.

Overall Review: I wanted a small keyboard/mouse combo for my MythTV box, and thought I would take a chance on this one. It has worked flawlessly for me. Granted, I don't do a lot of typing on it, but have used it to type emails and it has picked up keystrokes from 8-10 feet with no problems. The mouse also works great too. I am a big fan!

Cons: The receiver range is very limited unless you directly point it toward the keyboard. The mouse and keys can be laggy sometimes when the keyboard is moved around.

Overall Review: For the money it's definitely worth it if you want to set up a computer with limited desk space. The only real drawback is the receiver which can be overcome

Pros: The mouse has the ability to double as a joystick, which is awesome. First day I was playing galaga on the widescreen. Range is good if you know the limitations. Battery hasn't died yet and I've had it for over a month. Small and compact. Perfect for keeping in the drawer of my coffee table.

Cons: Wish it had volume control, but for the price you can't beat the functionality it does have. Also, when I first plugged it in it took me a little time to figure out the best placement for the receiver. And unfortunately, the cord wasn't very long.

Pros: I bought this keyboard for my home theater PC to be used at a distance of about 8 feet. The keyboard connected easily enough with the receiver and communicated reliably with it from about 3 feet provided the bottom of the keyboard, where the radio is, faced the top of the receiver, which emits the signal. However once I backed up, still using the same line of sight, to about 5 feet it no longer responded. If I altered the line of sight it could get the signal but missed 1 out of 3 keystrokes. Bottom line was after several hours of testing (and I test computers for a living professionally) the keyboard, while connected to a PC, requires a very specific line of sight to the top of the receiver and beyond about 3-5 feet it can not maintain a solid connection regardless. That being said, I decided to try it with my XBOX 360. What a HUGE difference!! Although line of sight is still key, it not only maintained the connection at 8 feet but its responsiveness is very impressive.

Cons: Had I reviewed this product for its initial intentions (HTPC) it would have received the lowest possible rating. But since I found an alternative use on the XBOX 360 and it performs very well there, I am giving it a 3 egg!

Overall Review: If you want a wireless KB for the XBOX 360, this is a great solution. No the mouse will not work, but that is true with any kb on the x360 that has a mouse. The keyboard is lightweight but sturdy feeling and the responsiveness and range are great for the X360. The "gray" color, which is really an off-white, matches the XBOX360 perfectly as does the receiver, so it blends nice sitting next to it. If you need a wireless KB solution for the PC, look elsewhere for sure!

Overall Review: I bought this for my classroom to help teach CS... I needed something more than a pointer so we could edit code together... this does the job very well, especially for the price. Installed it on a locked down network that doesn't allow any external devices or drivers; XP (SP1!!) picked it up without a hitch, no drivers needed for keyboard and mouse functionality, although obviously the shortcut keys don't work. I was plesantly surprised and we may purchase these for our entire teaching staff. Only major grips is that I miss having a scroll wheel... but the benefits far outweigh that inconvenience.