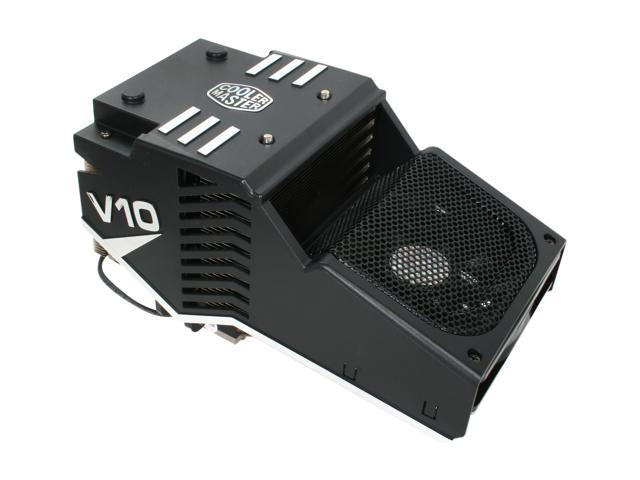 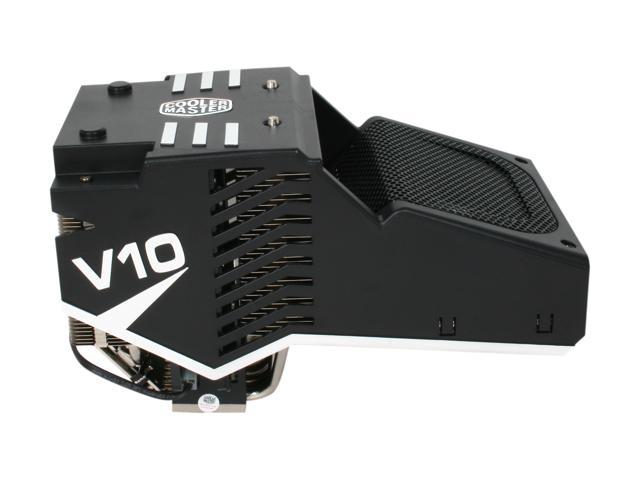 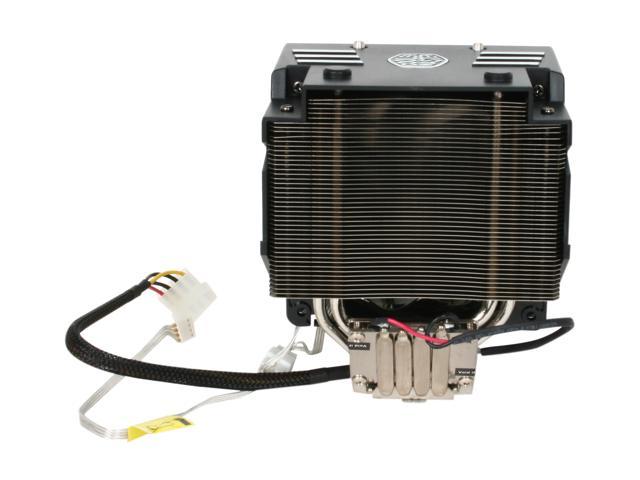 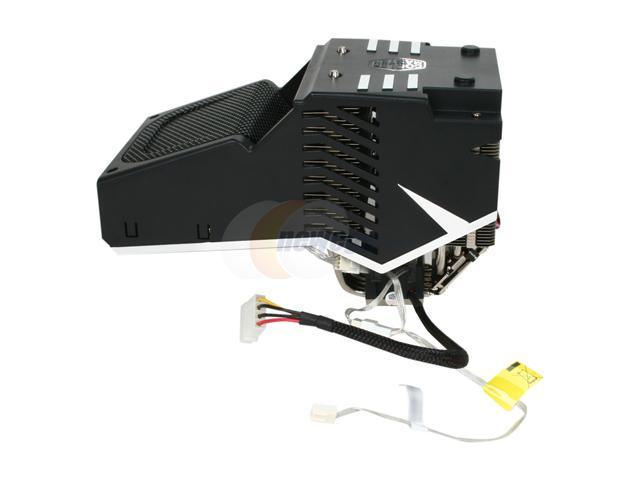 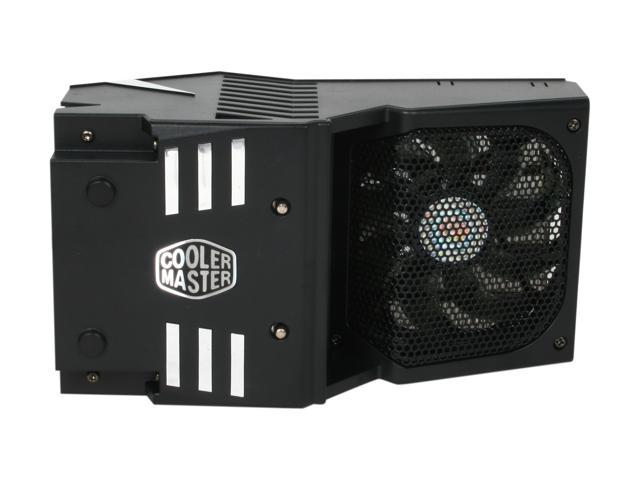 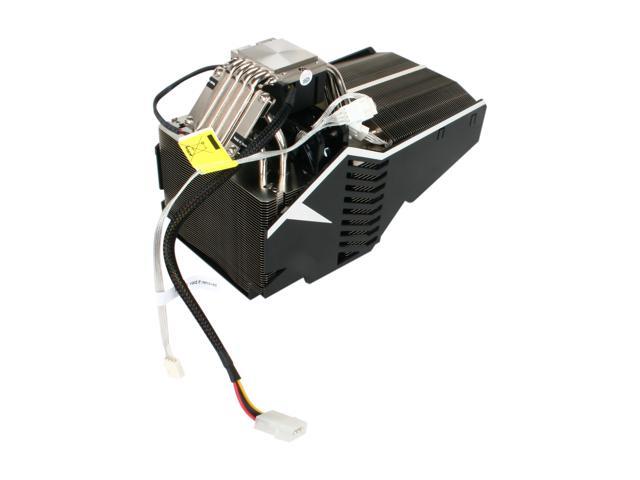 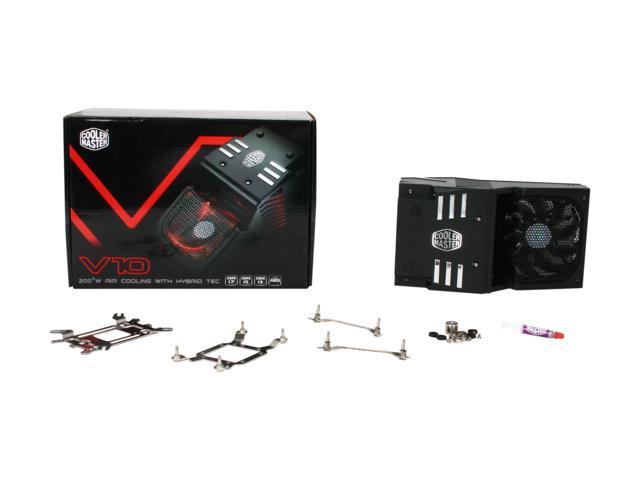 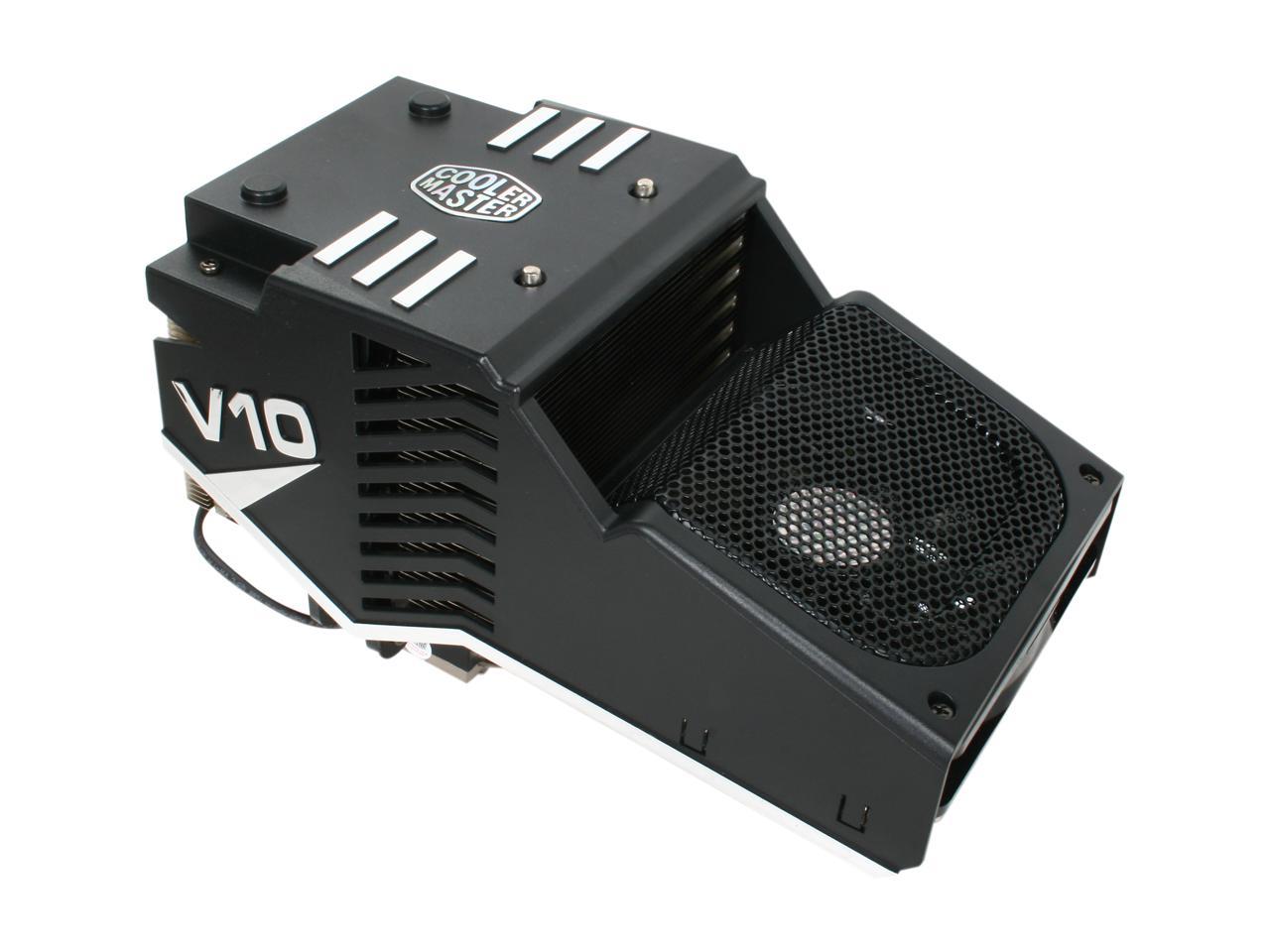 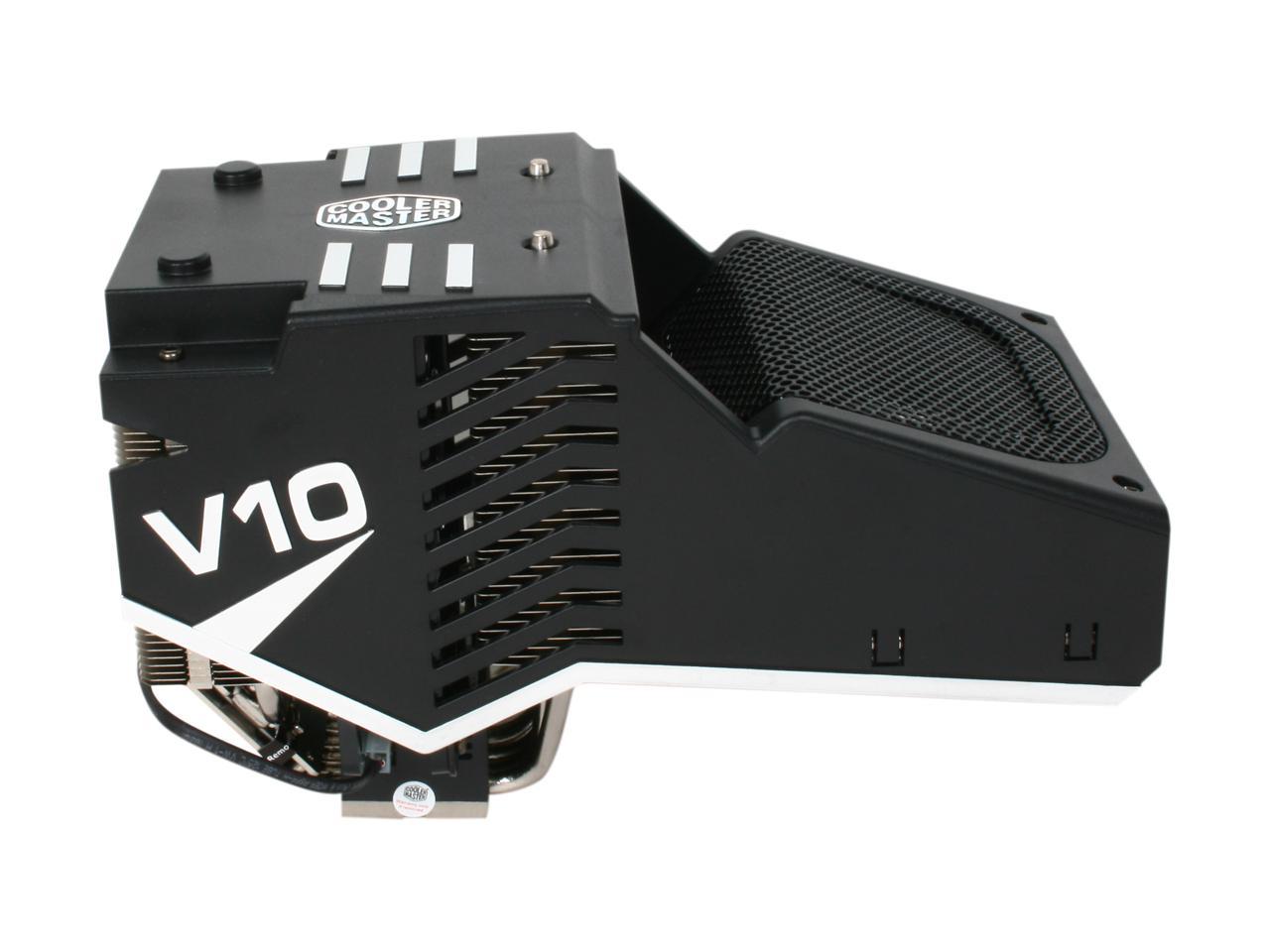 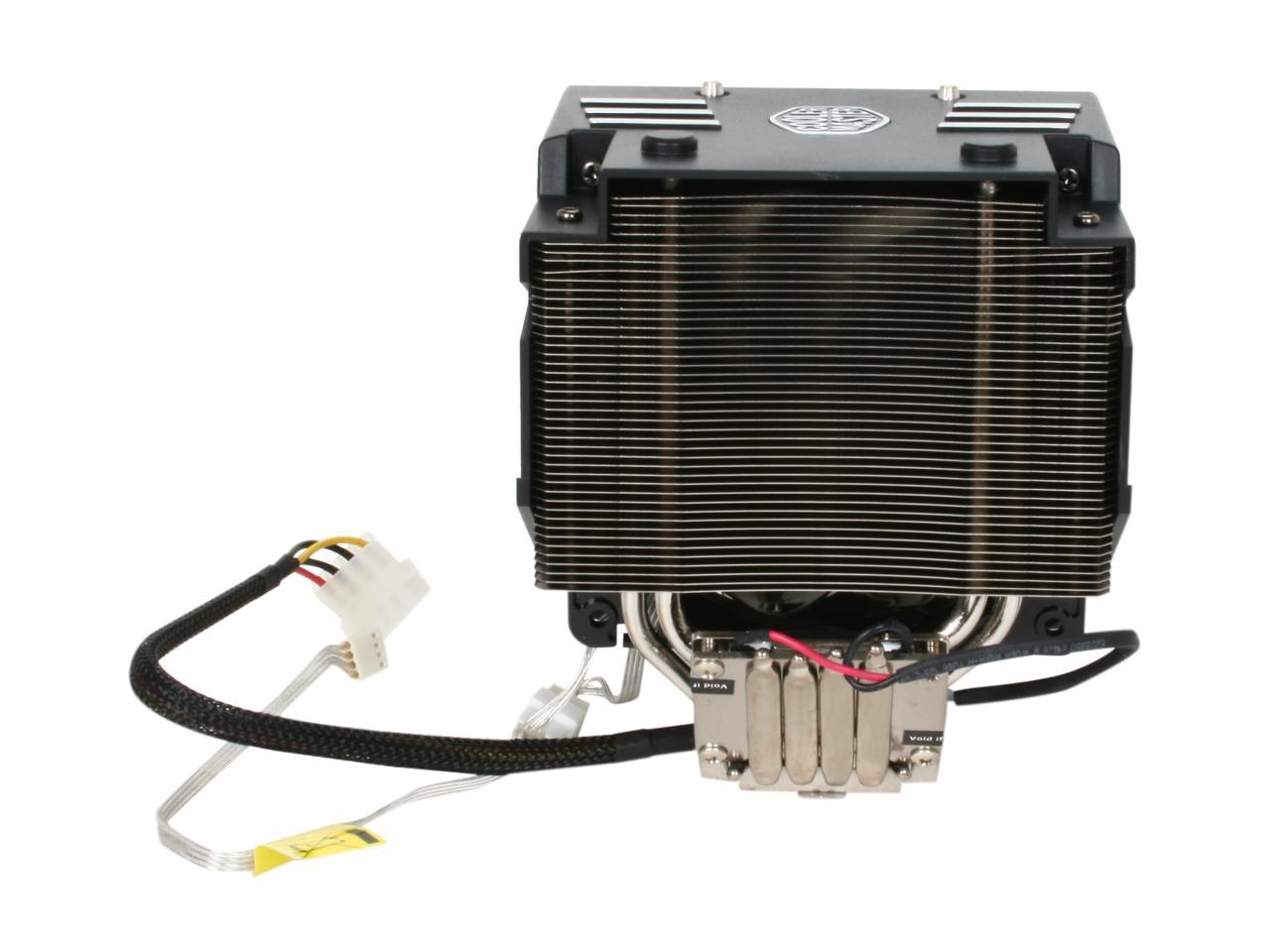 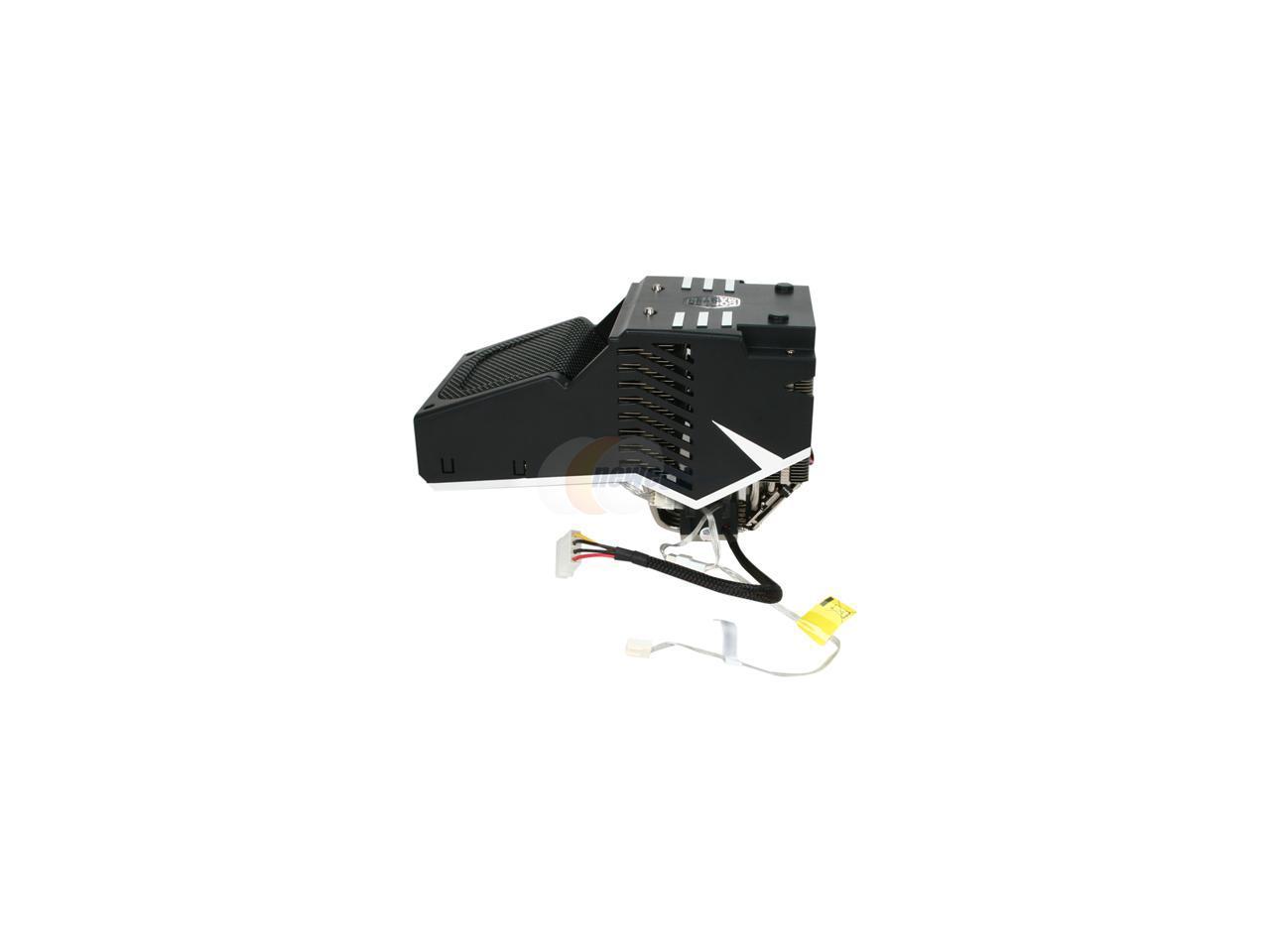 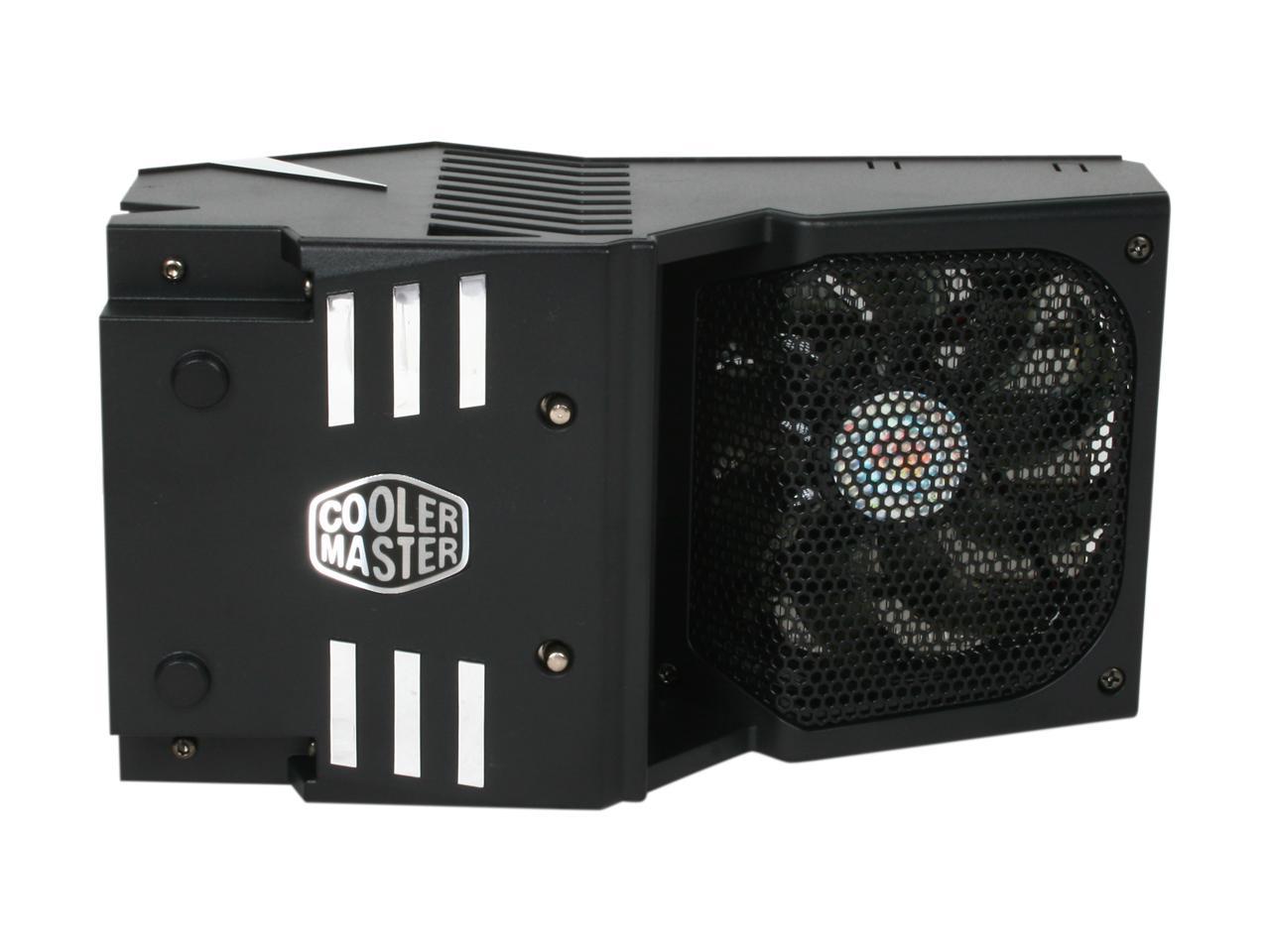 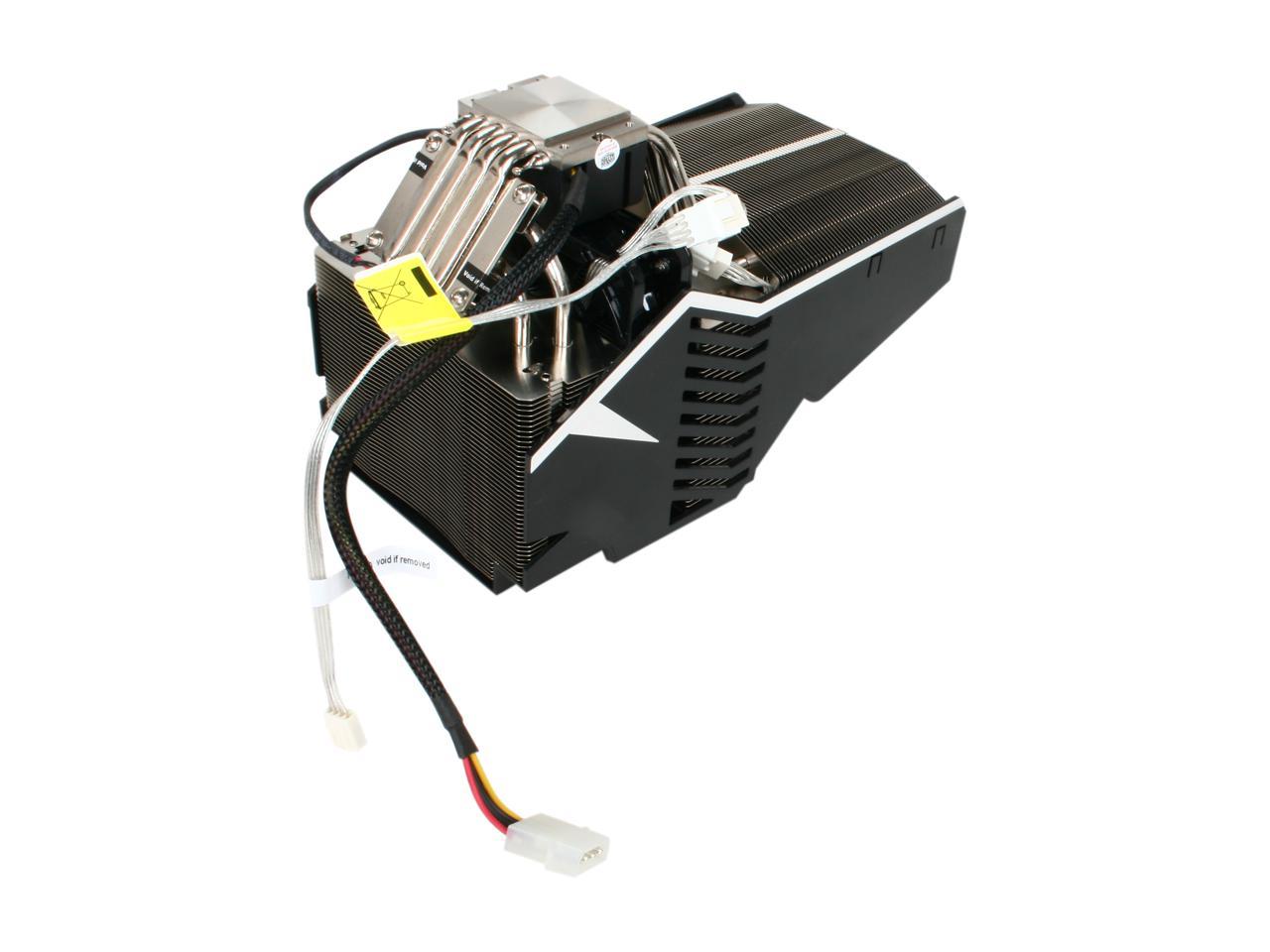 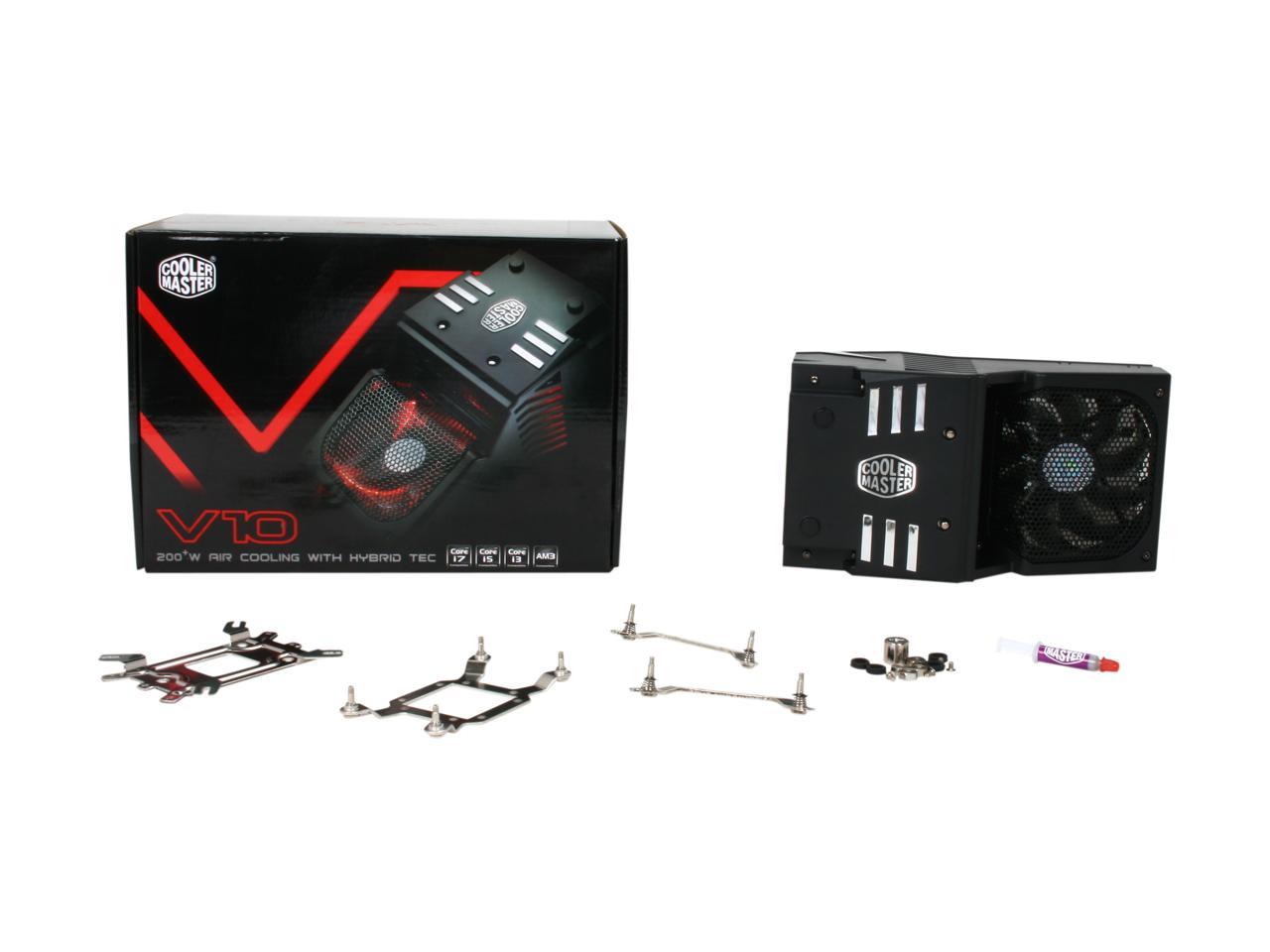 (160) Write a Review
OUT OF STOCK.
LOADING...
Overview
Specs
Reviews
As CPU processing power increases, so does the need to remove the damaging heat that increased power generates. The last thing a computer enthusiast wants when designing their machine is to cap it off with an ugly cooler. This heavy-duty machine - V10 RR-B2P-UV10-GP, which boasts the hybrid TEC technology, provides more than 200 watts of cooling power and takes cooling technology to the new level. A mirror-finished copper base provides optimal thermal transference from the CPU and the surplus heat flows along ten 6mm heat pipes to the unique triple heatsinks with modular aluminum cooling fins. Dual 120mm fans provide huge airflow over the heatsinks while maintaining a quiet operation with the integrated PWM functionality, which lets the BIOS monitor fan performance and thermal need and adjust the fan's speed accordingly.
The mounting kit is designed to allow the V10 to easily attach to a wide variety of Intel LGA775/1156/1366 processors as well as AMD CPUs using the AM2+, AM2 or AM3 sockets.

Cons: This thing is really BIG, not so much a con though.

Overall Review: The screews that go trough to HSF "legs" have left hand threads on the larger part of the shaft. Turn counter clockwise to tighten. It's made that way so when you mount it and tighten up the nuts on the back of the motherboard it won't come unscreewed from the HSF "legs". Some people have said it was bad QA or they got the wrong parts and complained about the price; well it's made that way for a reason. Newegg, please don't 86 this post. People need to know how to properly mount this thing and how it works.

Pros: Excellent cooling, surprisingly quiet. Looks great in the case, and as others stated the lighting is just right (not overpowering).

Cons: The large size will require you to remove your motherboard completely and unmount the V10 from the back of the board in order to add/swap RAM in most systems. For most people that is an hours worth of work for something that will take two minutes with a smaller CPU cooler. Expensive and exceptionally large. Even in a stacker 830 the top rear fan bracket must be removed for the side door to close.

Pros: Bought this monster in 09 and still love it! It removes a lot of heat from my overclocked q9550, even set at a very low RPM.

Cons: After about a year the two fans started "chattering". I was able to keep it under control by adjusting the RMP, but that got old. I emailed Cooler Master and asked how to buy replacement fans for the cooler. I was directed to fill out a "Parts Request" form and about a week later it was approved and two new replacement fans showed up three days later via UPS and at No charge!!!!

Overall Review: I've never bought a Cooler Master product before this, but it won't be my last!!! Way to stand behind your products Cooler Master!!!!

Pros: I'm doing a follow up review since I've read a few others do them. It gonna seem like I am bagging on this cooler, but in the end, you'll see I've given it 5 stars still, just not for the same reasons. I too, like so many others, found out after the fact the TEC won't ever kick in unless over 70c. This actually means, after owning this thing for a year, it has not turned on ONCE, not once. The HSF itself is so freakin large, it's bound to cool rather well. There's enough metal on the CPU to dissapate a small engine block. I have found one should clean this thing every 3 months (give or take) b/c the 3 fins will filter everything out of your ambient indoor air, and it clops up believe me (non-puffing house too.)

Cons: I thought the TEC issue needed to be addressed. Cooler Master writes it's for "top of the line" performing CPUs. Well, I can't complain of the fact my W3520 has never gone over 45c, but I was looking to see if there was some sort of software utility that could be generated to ramp the temp down to kick in the TEC. The dude from CM told me 'no" it can't and I should buy a V8. (scratches head) Are you kidding me? Does Cooler Master allow drug use in the office? Basically we are using a carborator size HSF with a worthless TEC (yes, unless you fan dies, seems with all the other HSFs using fans w/o TECs, we should be safe there with a little awareness.) Why even put it on? They boost about a worthless useless aspect. Even with some really good OCs, yes, the HSF will keep temps below 70c, but it could do so much more. For the money we paid, tey should ramp this thing up to provide more efficiency. BUT NO!!!! We should go buy a V8 instead!!!! PAss that fattie over here buddy!

Overall Review: So there's my rant. I love the V10, it's huge, and it does the job b/c for the very reason it is so huge. But it could potenitally do so much more. I've read a number of posts here that say this is a better option than water cooling. Well guess what gents, (and gentettes) it is not. I'm doing both, and with OCs of a 920/930/W3520 over 4.0Ghz + the V10 will get up there, but not enough to kick in the TEC, keeping your system hot then need be. A nice Heatkiller Lite and Feser 360 Rad will keep these around 35c-40c with a solid loop. The V10 can't touch that, and for the money , one's not too far away from a good loop.

Pros: Best heatsink cooler yet to date.. keeps my i7core 920 at 25c and if i open my side pannel and let it sit in front of a window its even gone down to 19c..best cooler in its class. BLOWS AWAY the Coolermaster V8. Very easy to assemble although it is very big. Fans are very quiet works very well.

Cons: Its oviously the price i do not think its worth 140US Dollars. more in the 80 dollar range but to me its worth it.The thing is wayyyyy tooo big i would get measurements before hand.It Does fit in my Cooler Master Mid tower CM690 tho....I RECOMEND THIS TO ONLY OVERCLOCKERS Not meant for stock settings... i mean it is but u would only be wasting money..might as well get a a cheaper heatsink if ur gonna keep it stock.

Overall Review: ive read reviews online and this product just performs as if it were a water cooler, with no mess and easy install.. i would recomend it if your willing to pay the pricey tag. i7 core 920 OC to 4.0 Asus P6t Deluxe Corsair Dominator DDR3 Western DIgital 1t Harddrive BFG 260 GC ABS BZ800 Watt Vista 64bit i7 core is the FASTTEST processor EVER MADE!!!!

Pros: Pros: Good looking cooler and covers RAM for additional cooling. If you average the price of a CPU air cooler and an air RAM cooler, the value is about equal. Keeps stock clocked i7 950 at about 43C idle. (This is NOT amazing). No condensation issues with the TEC whatsoever.

Cons: Cons: Big and heavy, be sure your MB can handle a 2.5 lb weight hanging off of it. The fans are VERY prone to death by dust. I clean my PC weekly and had one of the 120mm fans completely seize in about 4 months. Poor customer service from manufacturer. I replaced both fans (but could only find 3 pin fans, not 4 pin fans) from Cooler Master, but they told me that my doing so I had voided my warranty- still had 5 months of warranty left. Tech support assumed I was dense enough to not have plugged the fan plug into the CPU fan headder on the motherboard, which I found somewhat insulting. When the tech kicks in this thing sounds like a harrier taking off.

Overall Review: I have built a few PC's in my day. This cooler was selected because it was SUPPOSED to be almost as good as liquid. Keeping my CPU temps at 50-60C under load is not that impressive for a cooler in this price range, especially without an OC on the processor! A filter on your intake fans is a MUST, as the fans in this cooler are very fragile. Volume can be anywhere from quiet at a dull idle to hurricane force during heavy use. Perhaps I just bought into the hype, but somehow I expected more from this product. If you are building a monster gaming rig, air cooling is still not as good as liquid- but at least you do not have to worry about a leak with an air unit. It can be a tough trade-off. As air coolers go, this one is decent but do not presume it will chill you for a good OC- it will not.

Pros: This cooler does just what it says it does. The temperaturs I run average 122 degrees Fahrenheit at full load on an i7core 940 and 98 degrees at an idle. Couldn't be happier with it's cooling abilty. Even overclocked to 3.7GHz the temps average 165 at full load.

Cons: It can be difficult to install due to the size of the cooler and the space you have available in your case. On my mother board the cooler covers two fan plugs and both the 8pin and 24 pin connectors so getting those connected after the motherboard is back in your case can be a challenge (it took almost an hour to connect those four plugs for me).

Overall Review: I unfortuantely received a defective fan out of the pair of 120mm fans that came with the cooler. Normally I would say this isn't a big deal. However both fans run off the same plug so getting a replacement is only through the manufacturer. I submitted the warranty part request and it has been 35 business days since it was approved. I have been told twice, upon request of status, that the part would be going out in the next two business days and each time their estimate was incorect. So don't expect timely customer service from the manufacturer. I would give this product 5 stars on Pros, 3 stars on Cons and manufacturer service I would give 1 star at best. I will average the 3 and 5 and leave out the 1 star since most people wont have to deal with the manufacturer.

Pros: This monster is huge!, but I will say that it works great, temps of 60c down to 40 on load. So I am impressed.

Cons: This does not fit in your small to medium towers, I knew this going in so not really a con but to people just looking to upgrade their cooler i guess this could be a con.

Overall Review: Really impressed so far, will reccomend it to other people.