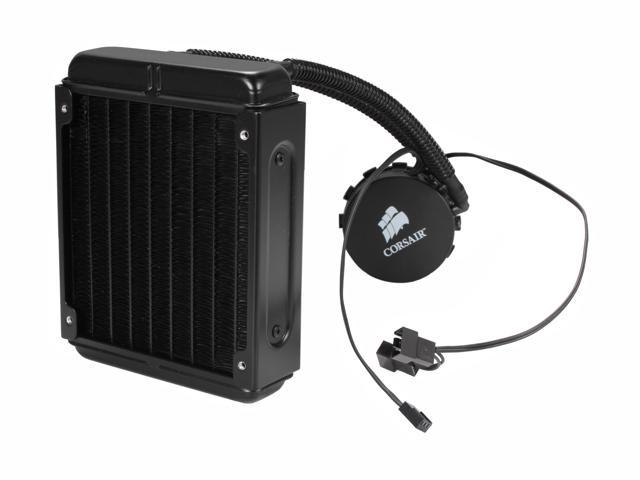 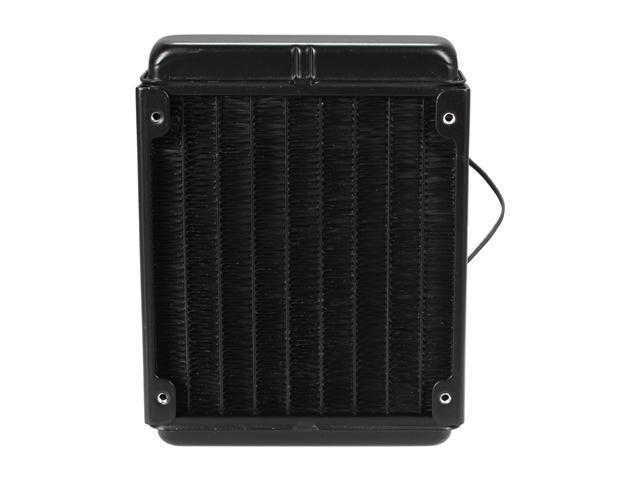 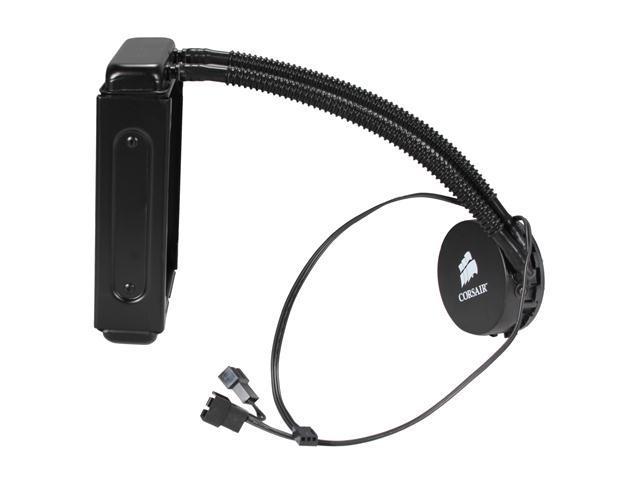 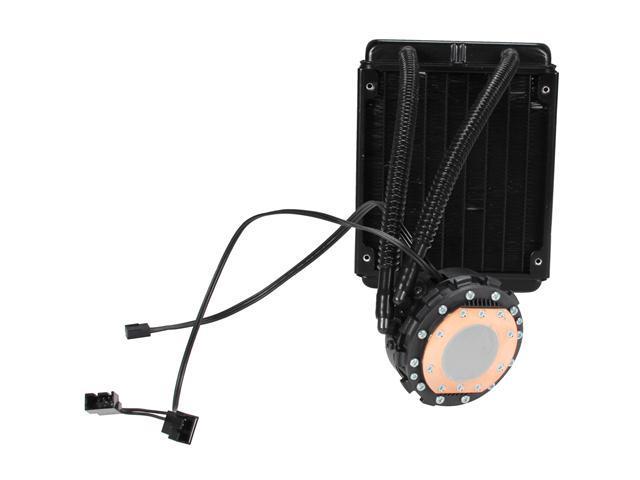 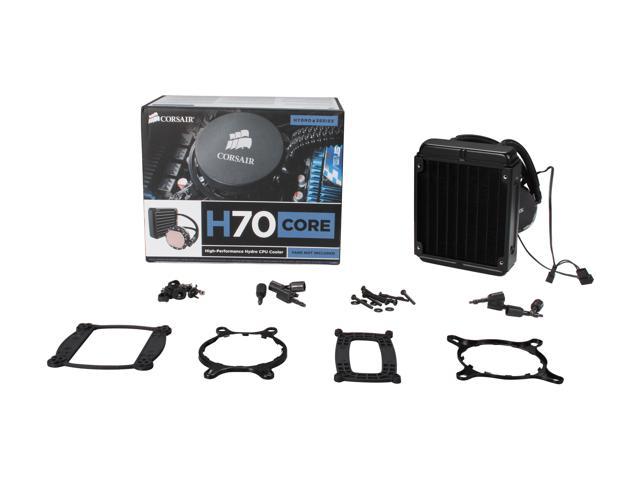 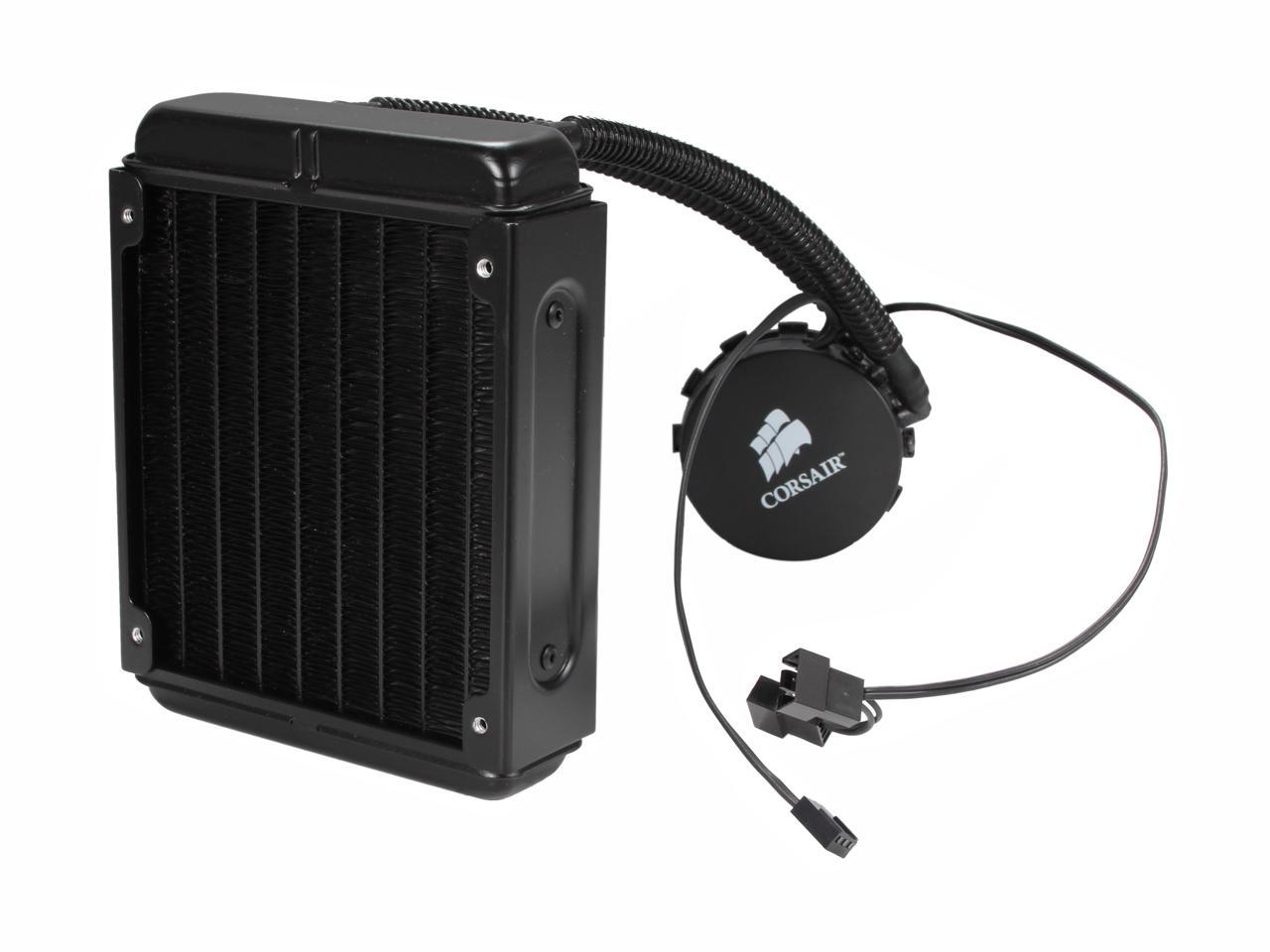 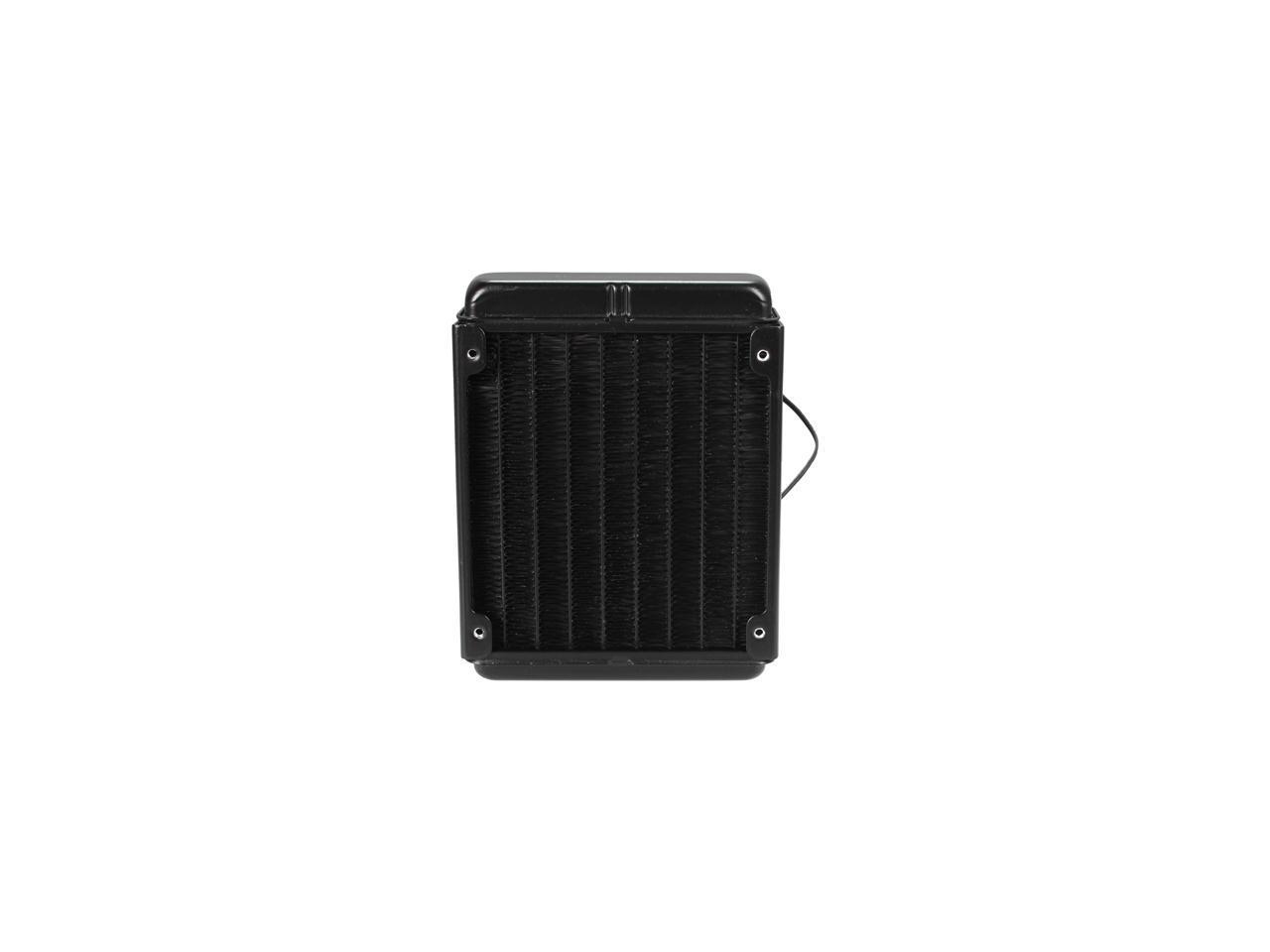 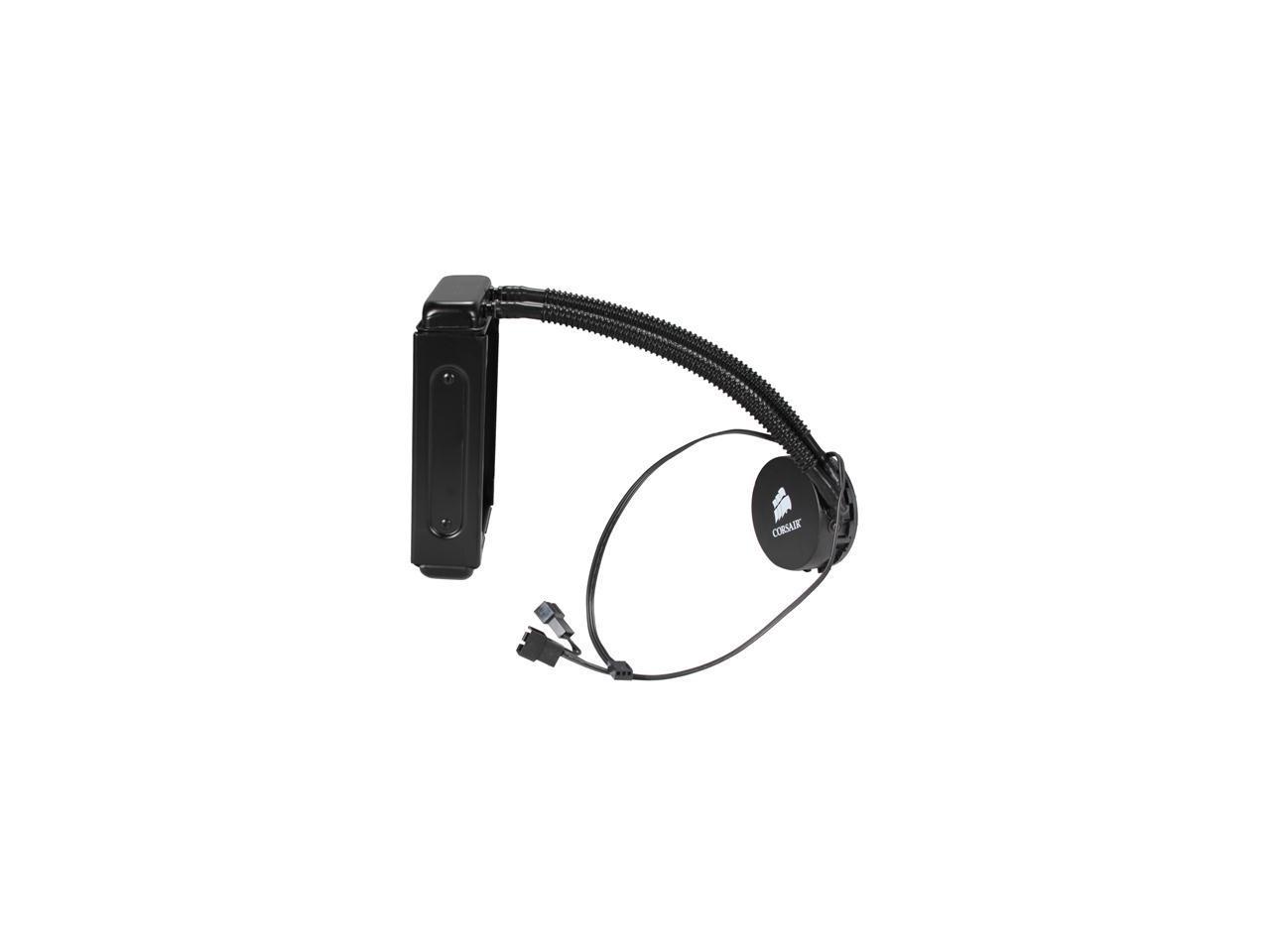 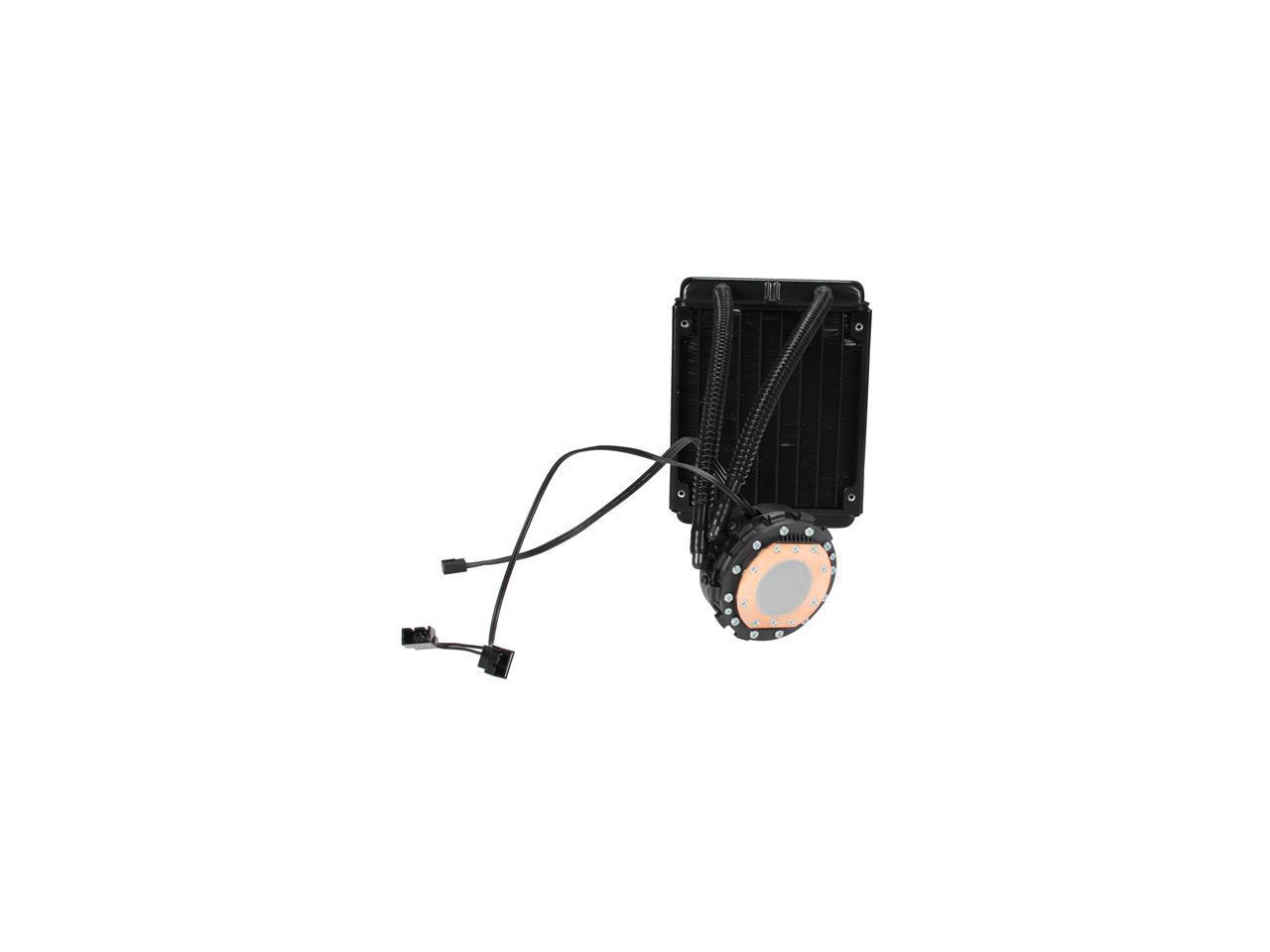 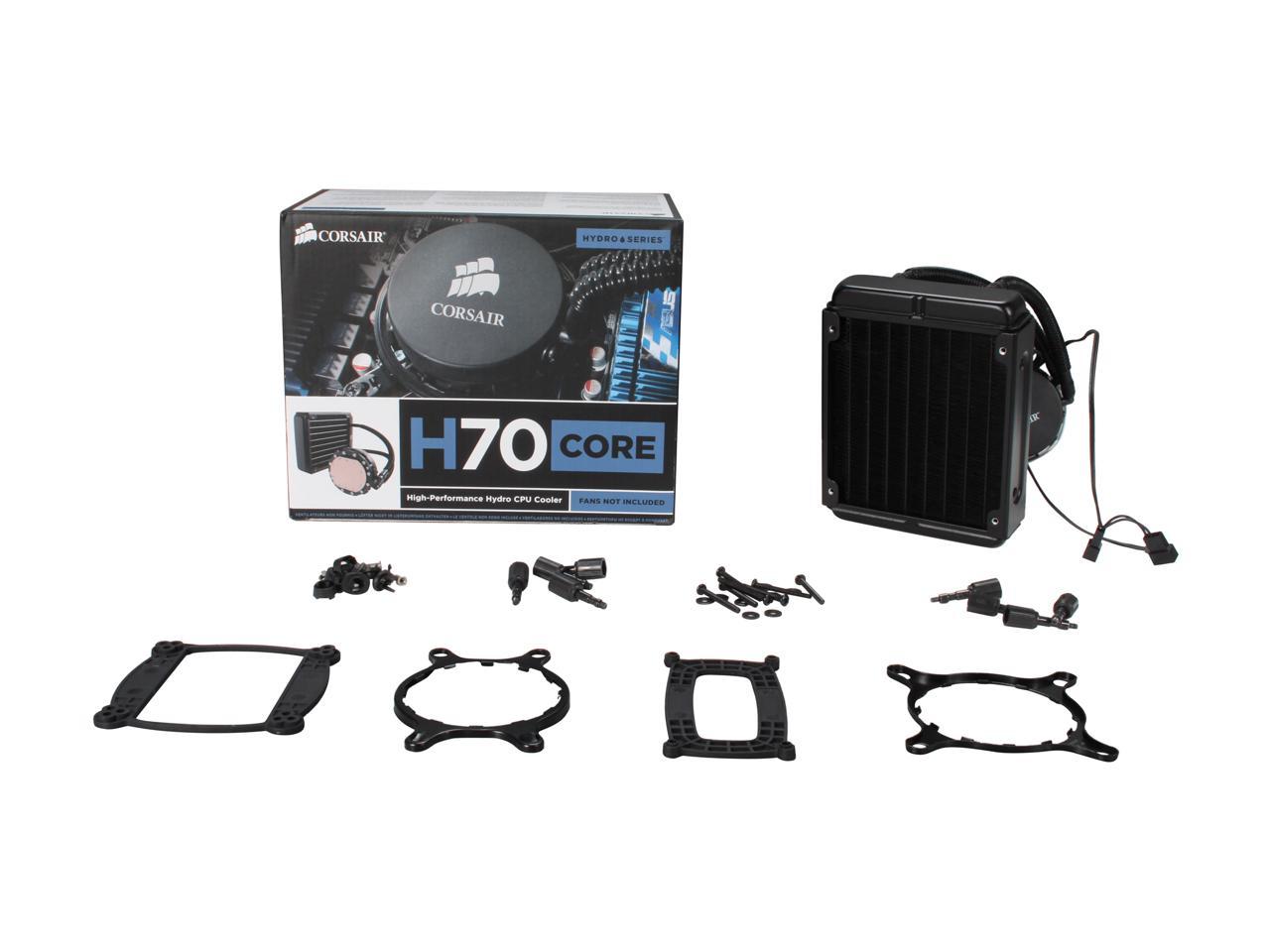 (106) Write a Review
OUT OF STOCK.
Overview
Specs
Reviews Hydro Series H70 CORE builds on the award-winning legacy of CORSAIR’s original H70 cooler, with one key difference: you supply your own fans. If you've already built a high-performance PC system (or three), you probably have a few extra 120mm fans lying around. Or, you might just want to choose your own fans. Either way, the H70 CORE gives you the freedom to fully customize your cooling performance.

Pros: Simple install great cooling great cpu mounting kit Someone should have thought of this years ago!

Cons: maybe a pump in the cpu block or inline in a hose for even better cooling

Pros: It cools my i5-3570k pritty good. Not going to push it too far though. I like the fact that you can buy this unit without the fans. I used green led gans with mine to match my haf x nvidia ed case. Runs really quiet. amost too quiet. I can't hear the pump at all.

Cons: The pump is so quiet, I cant really tell its running other than my CPU has a low temp. I wish someone would make these cooler kits with clear pipes. Really how much more would that cost to make vs how my you would sale with this feature.

Overall Review: Who ever is the first to make these kits with clear tubing is going to corner the market. That translates to $$$$$$$$. Think about it, clear tubing with Bright green or blue fluid. If you agree click yes this was helpfull.

Pros: So far so good and I only say that because there is liquid cooling in my system now :) installation was a breeze...way easier than my zalman cnps9900max which this replaced. i installed in antec 900 on rear 120mm exhaust fan (so im running as exhaust out of case)with another 120mm blue fan to match my other 5 fans (6 total now). case fans did required modding though see other thoughts. idle temps are around 35c using arctic silver with i7 860 (i removed pre applied stuff)...i expected a little more of a drop than i got compared to the zalman (about a 5 degree drop) but it still keeps my cpu cool so im not complaining. during prime 95 for 30 minutes cpu rose to 57c and stayed there. during hours of BF3 cpu hovers around ~48c

Cons: none...........the cooler feels quality made, seals are all legit and look and feel strong.

Overall Review: side panel fan in my antec 900 required modding back when i installed my zalman 135mm cooler...i mounted side panel fan as exhaust and had to use a hack saw to remove the other unused fan clip. to be able to fit the h70 using a dual fan configuration I had to saw off the used fan clip again but off the new fan so that it would not press against the casing of the side panel fan. didn't bother me much or enough to call that a con or reduce an egg, i was kind of expecting it since my last cooler install required me to mod the fan. i already had the tools to get the job done.

Pros: Corsair made the H70 model specifically for people (like me) who wanted to select their own fans (i.e. you like quiet fans or blue LED fans or Delta fans or whatever). Installation is a breeze. Just be sure to install the processor BEFORE you install the round mounting bracket. The included instruction booklet has some decent illustrations of the assembly. It includes pre-applied thermal compound, which is more than sufficient. However, if you prefer electrically non-conductive compound or something, you can replace it. The old stuff wiped off easily, leaving a clean copper surface. It includes a Y-adapter that merges both 120mm fan sensor wires into one for connecting to the mobo's CPU fan port. Will need further testing to determine whether the fan speed values are averaged, if it only takes the speed of one fan, or perhaps something else entirely. The coolant hoses come securely pre-attached, which took away some of the worry of the dreaded coolant leak situation.

Cons: It isn't Corsair Link-ready like the H60 and H80, but I'm not sure I care. ***X58 OWNERS, READ THIS BEFORE BUYING*** If you're a first gen Intel i7 9xx (1366/X58) owner, be sure to take your mosfet cooling situation into account. They get HOT, especially when overclocking. The H70 radiator (sandwiched between two fans) will be mounted to the rear of the case, which probably places the assembly directly over the mosfet chipset. Unless you can find a creative way to mount this so the mosfet can breathe or introduce supplemental mosfet cooling, this may not be the best option for you. :(

Overall Review: This item was improperly categorized under the normal air-cooling fans and heatsinks until very recently. This is likely the biggest reason for the low number of reviews. It deserves as much attention as the other models in the current line-up. I build PC's for a living and cannot think of an easier or more effective cooling solution for the money at this time. If you're replacing an existing traditional heatsink, you will undoubtedly see a significant drop in CPU temps.

Pros: Nice idea. Would have been a great product if the pump wasnt rattling...

Pros: I'm running Prime95 on my i7-920 while writing this, and it ain't getting above 60C... never has in the month or so I've had it. Meanwhile the other i7-920 build in my office (that has the case half-open and an idle workstation card, not a 460GTX) is running with core 4 at 76 and core 1 at 80 with the intel stock HSF. It does it's job, for sure, but I am a tad disappointed that the non-load temps run about the same as the stock heatsink, around 40C. BE ADVISED: That may be because I OCD'd out on the thermal paste. I would love to hear otherwise but that is how it is for me, and it doesn't sound too much different on other sites. The packaging is great. The mount is secure once installed, a HUGE improvement from the stock HSF, which was one of the main reasons I was looking for a replacement. The mount brackets seem sturdy, and the package all-together looks good. It looks great installed. The 5-yr warranty is quite reassuring. I've been (and still am) a tad wary of water.

Cons: As mentioned, it doesn't really help with low load temps, and I suspect that to be directly related to the pain of finding good radiator fans that don't cost a small fortune. I'm using Cooler Master 120mm fans with a box-stated static pressure of 1.65mmH2O. This is quite far away from the 2.3mmH2O fans stated on a couple sites I've found that the non-'core' H70 comes with. I'll eventually buy some, but until then I'm not seeing any issues with it. Also, the installation paper instructions are a joke. You have to really sit down and look at the thing for a bit to see how it's all going to fit together, and then manage not to smudge up the paste too much. It's not the hardest thing I've had to do, but it definitely is a PITA. It might cost an extra $40 to kit out this thing. Sure, it seemed like a good deal at the time (black friday), but add the cost of 2 good radiator fans and you're well past the bro-tier air cooled systems, most of which are just as good (if not better).

Overall Review: I wish Newegg sold the H70 regular set. Does it work good? Yes. Is it competitive? Maybe. I'll give it 4 stars, but the price should be putting it down to 3. Keep in mind, this isn't competing with hardcore custom water setups, it's a direct competitor to high-end air systems. Case considerations: I ultimately got this because I was hearing some issues with the Antec 300 not fitting with some other HSFs I was looking at, and figured this would fit well. Keep in mind, this is about the same bulk as a good air HSF, but it relocates the bulk to the back 120mm port of your case. Also, it BARELY scrapes by my X58 heatsink. It's closer than I anticipated. I use the Cooler Master fans in a push-pull drawing into the case from outside. Side panel/top fans (120/140) blow out. Front fans (2x120) blow in over the HDs. Antec 300 case EVGA X58 LE i7-920 (stock) 6x2GB no-fancy-heatsink RAM EVGA GTX460 Corsair AX750 PSU Got suggestions? Don't spam here, send it to my name@gmail

Pros: Dropped the temperature on my Sandy Bridge E by over 10C. Despite the bad installation instructions, once you figure it out, it is pretty easy to install.

Cons: Bad instructions is the first thing to notice, i.e. plastic knobs go on the screw holes on the bracket before you install it. I am removing an egg because this unit comes with only a two pin connector. Effectively, this means that the fan will be blasting at full speed all the time, make sure to pick a quiet fan.

Overall Review: I am getting high 60s temperature on 6 core SBE at full load in a relatively warm room (maybe 77F). When I mean full load, I mean MATLAB with 12 threads working at 100%, this is a lot more than the regular games would do. The radiator may not fit in all boxes, mine is pretty big, but you should read and measure for your box.

Pros: - I had an air cooled 130 watt cpu, this dropped the idol temps 8 degrees and carrys over while under load (38-30,50-42/44) - Easy install, but more on that later - self-contained and arrived in good condition, copper base pre pasted - cooling tubes swivel, which is Great.

Cons: - tubes could be a little longer, mby 2-3 inchs - there can be a slight clicking sound as other people mentioned but you don't really hear it until you look for it. - the instructions have decent pictures but have perhaps 2 sentences which isn't really enough to explain to everyone how to install it. - it says to turn and click the cpu in, how ever the mounting catchs don't have a slit

Overall Review: Let me explain the installation a bit more. there are teeth on a bracket and catches on the cooling block. the instructions tell you to place the block in the center and twist to lock it. this would be ok if there was enough clearance but on a 2011 socket(p9x79pro) there just isn't enough room. So in order to get it to mount you just have to line up the catches and ignore the twisting and screw down the bracket. Be sure to build the plastic raisers like the picture.