Feel 100% satisfied with your purchase -- with no restocking fees & no return shipping costs* within 30 days of delivery. Learn More
Newegg’s gift-wrap service is the ideal solution for making your gift special! Select your item as a gift, then add your message. Your gift will also be discreet with no prices being included on the packing slip.
Price Alert
Add To ListFound on 56 wish lists 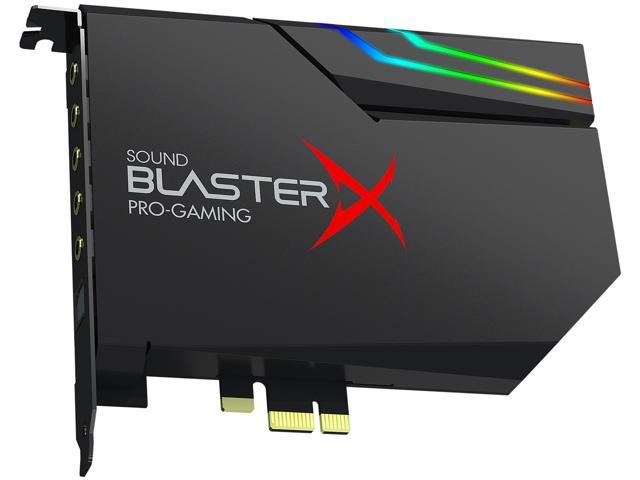 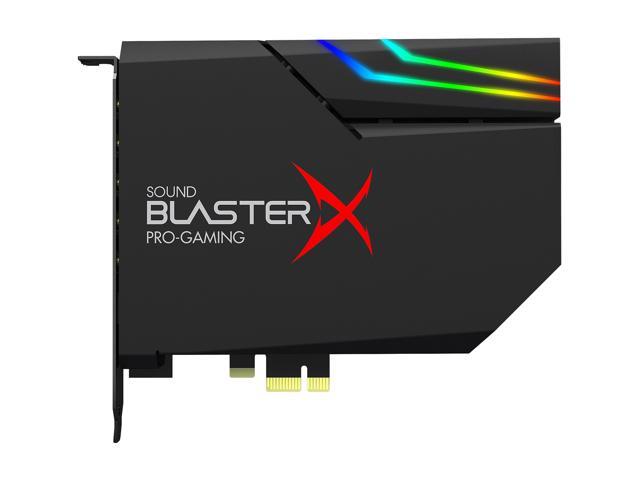 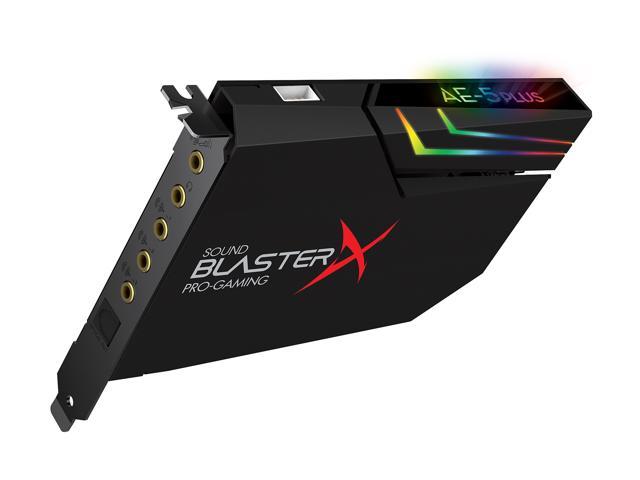 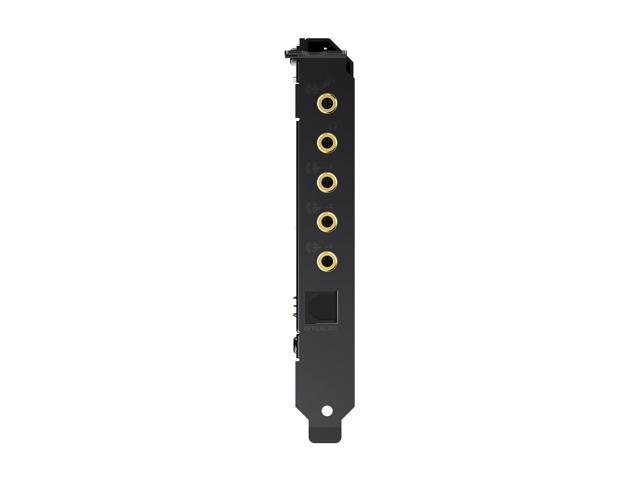 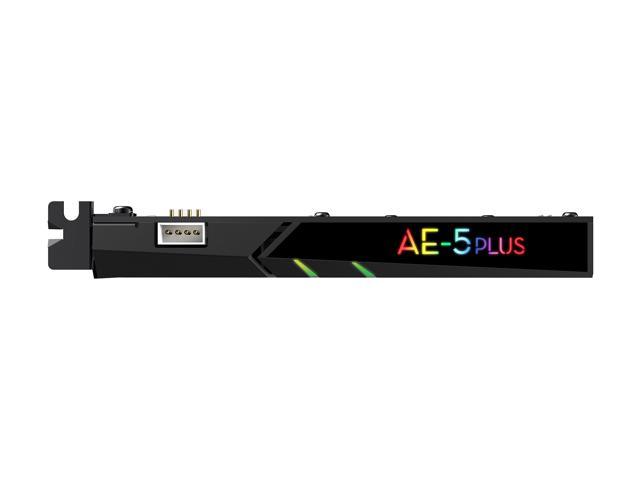 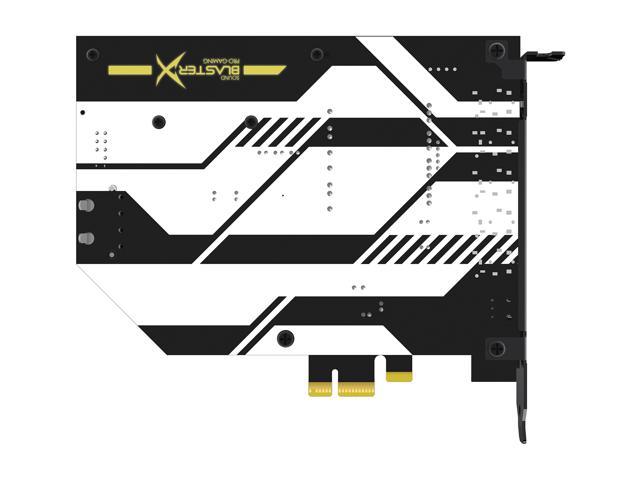 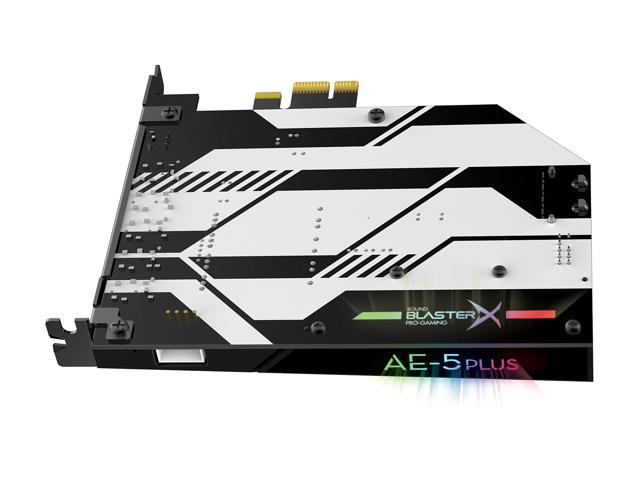 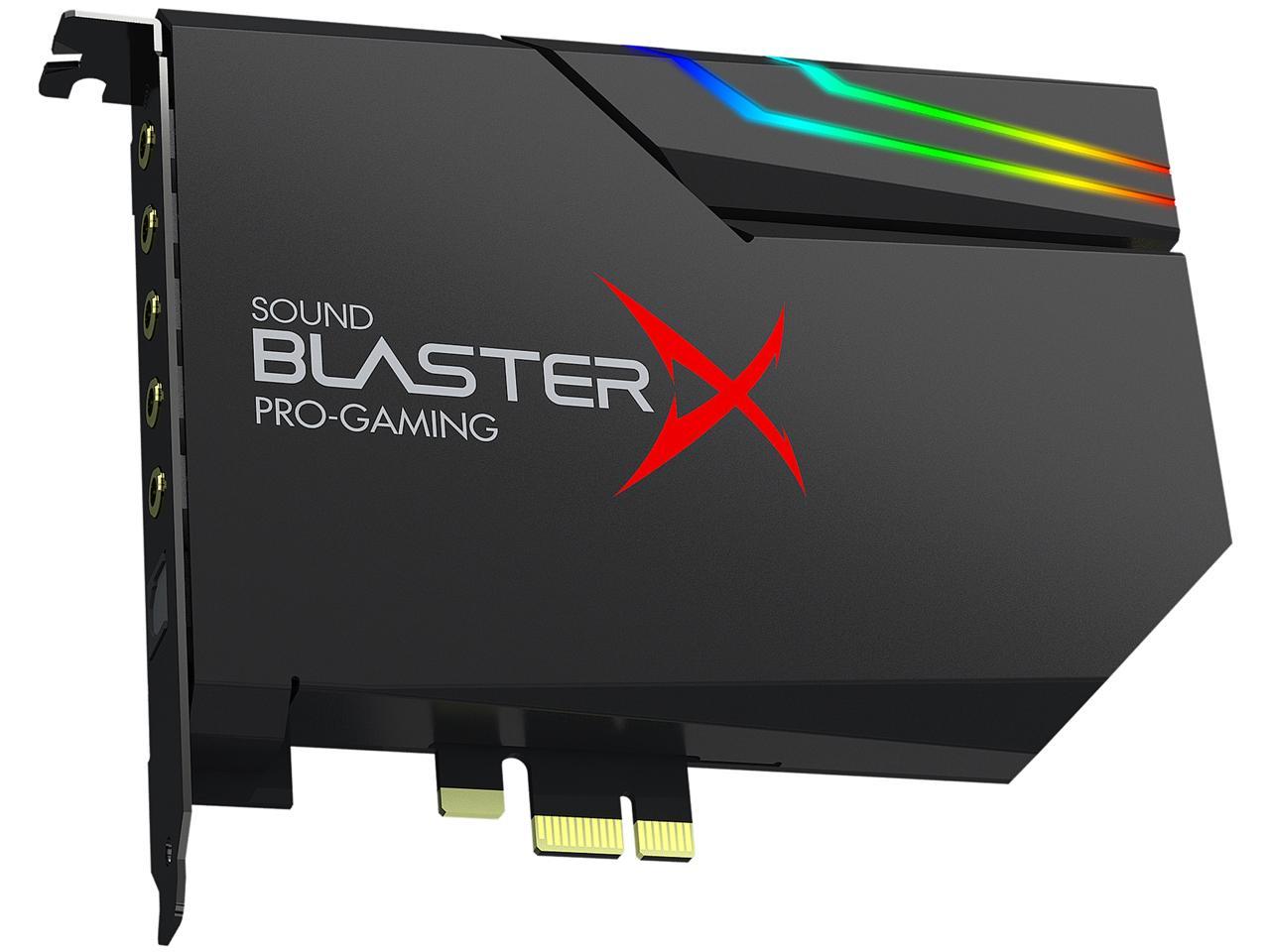 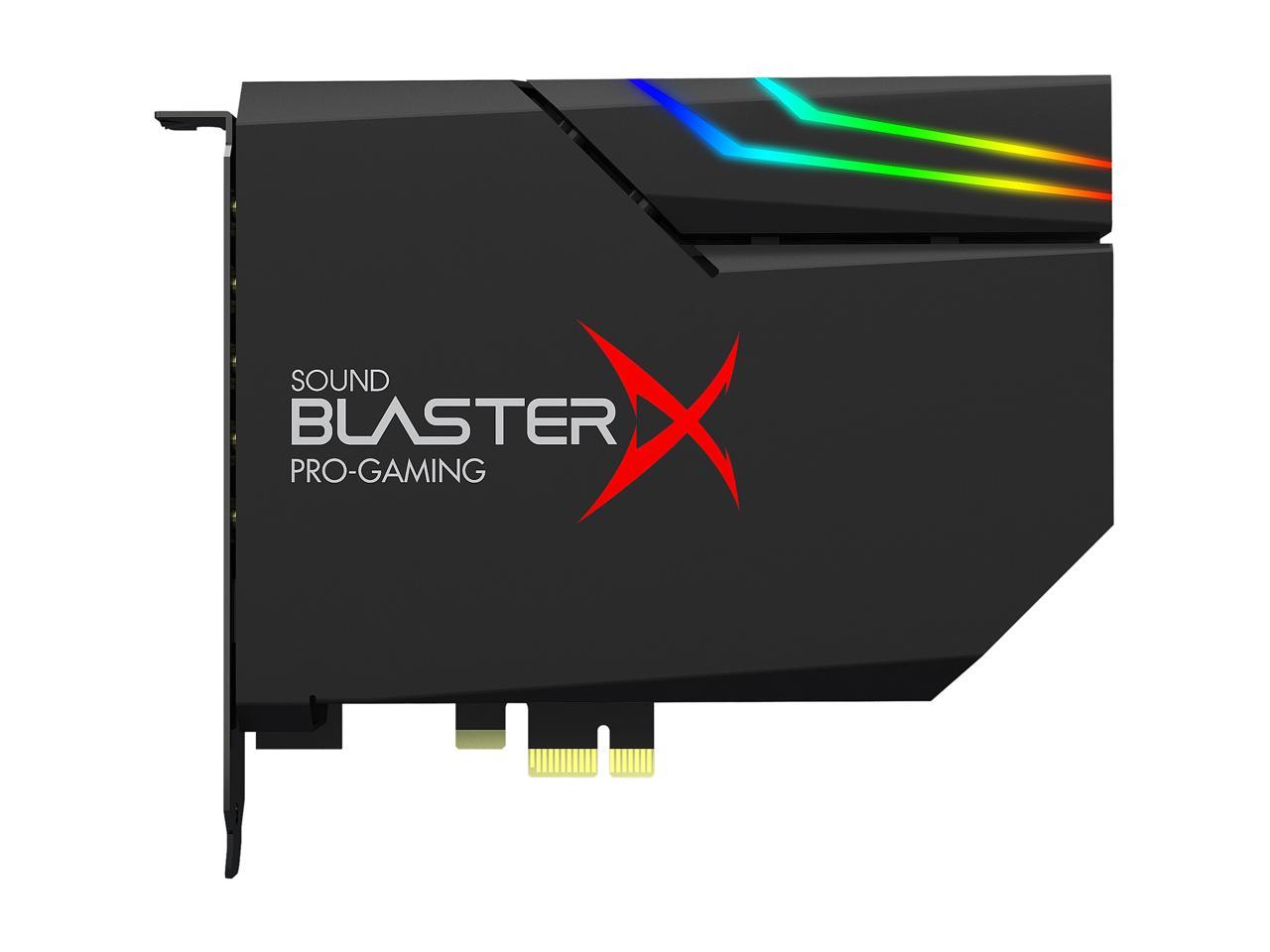 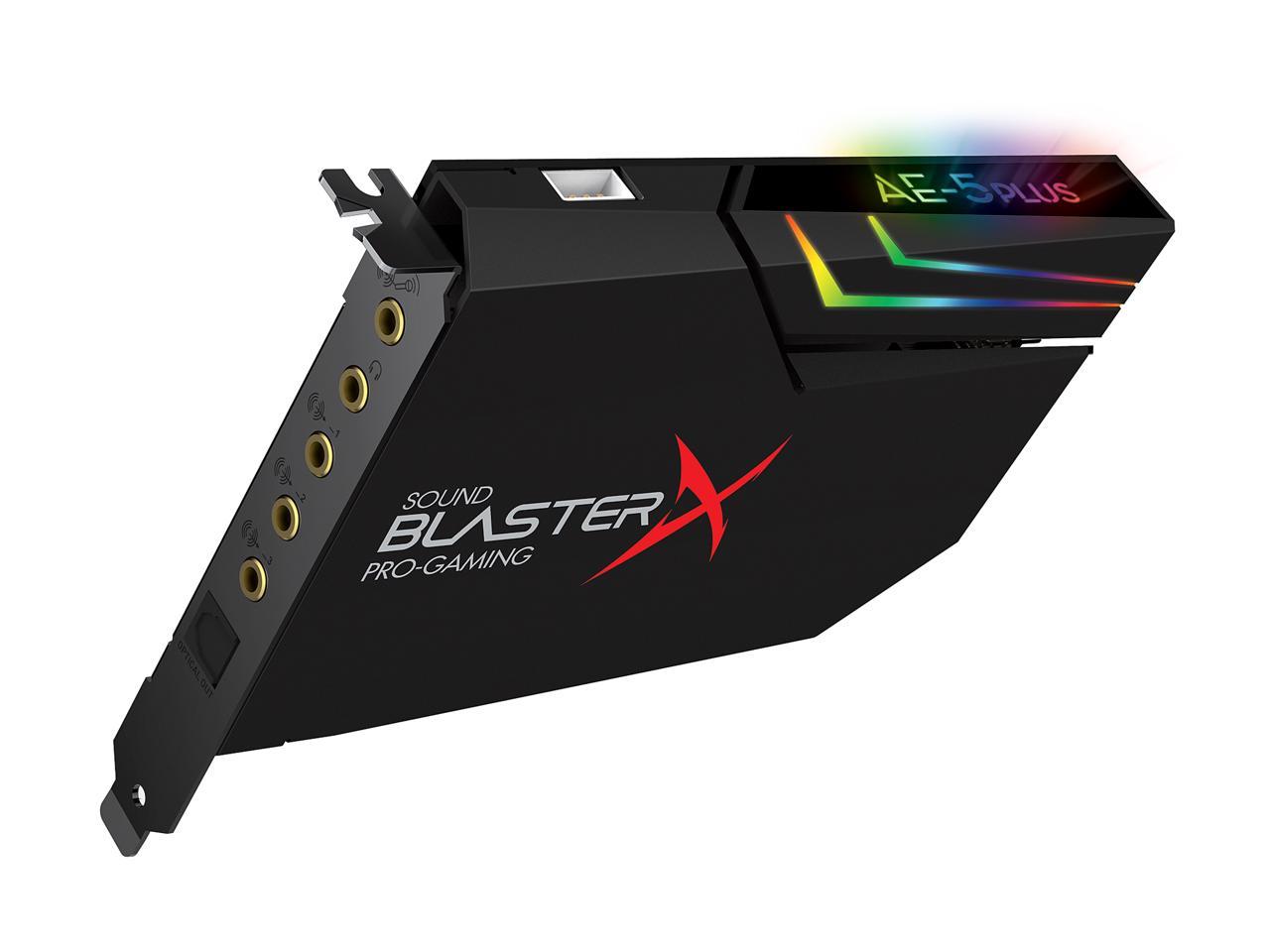 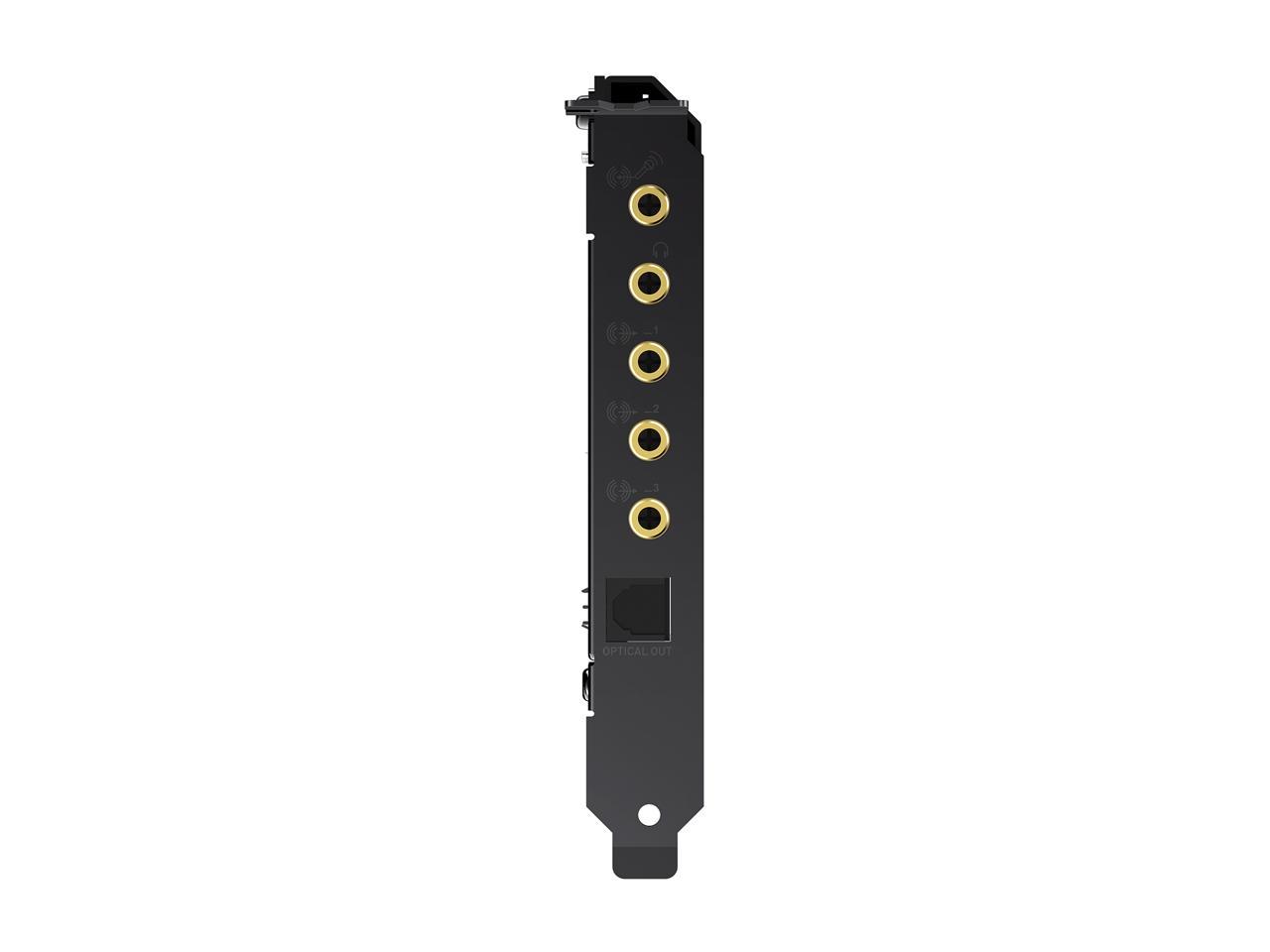 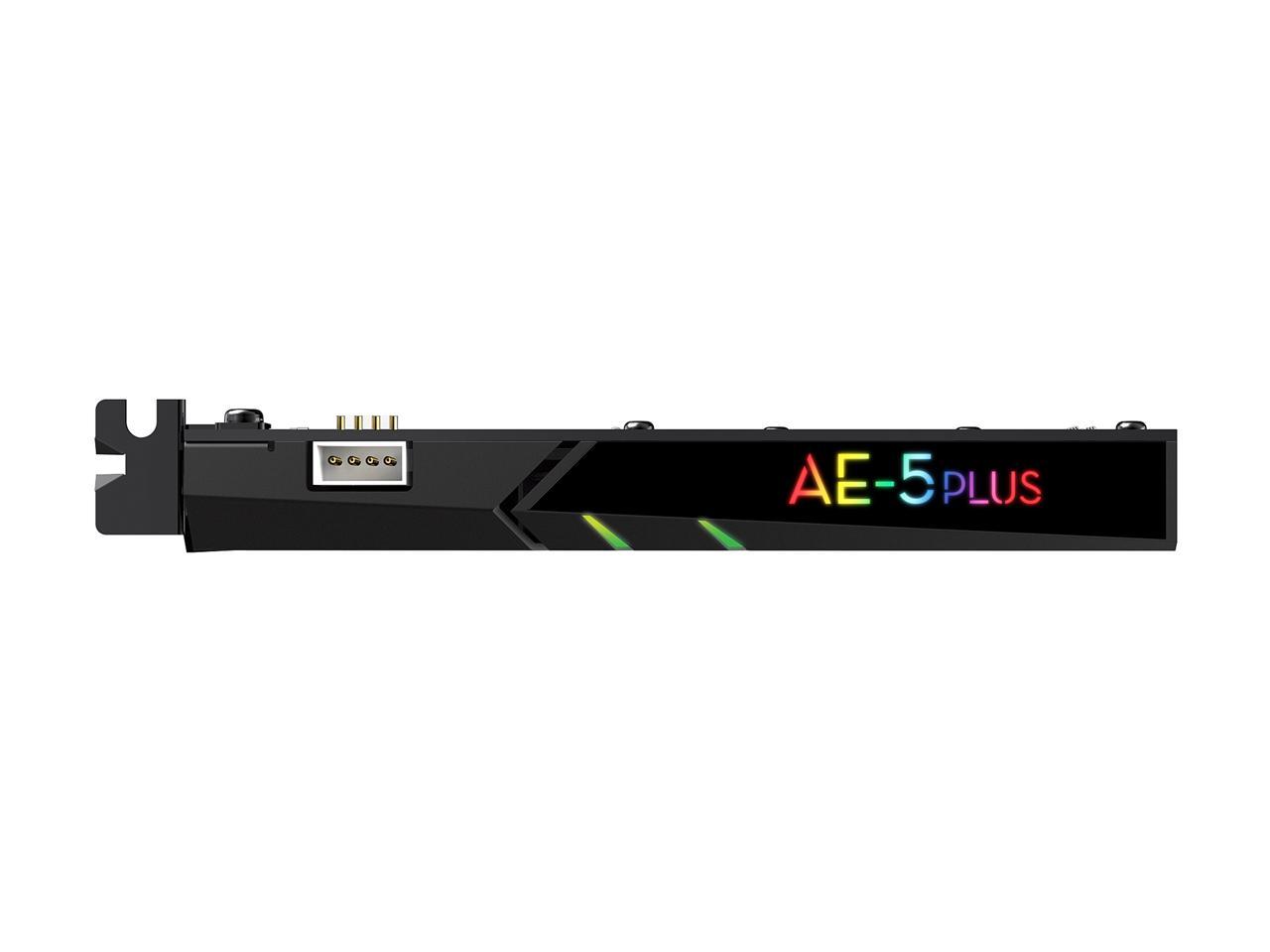 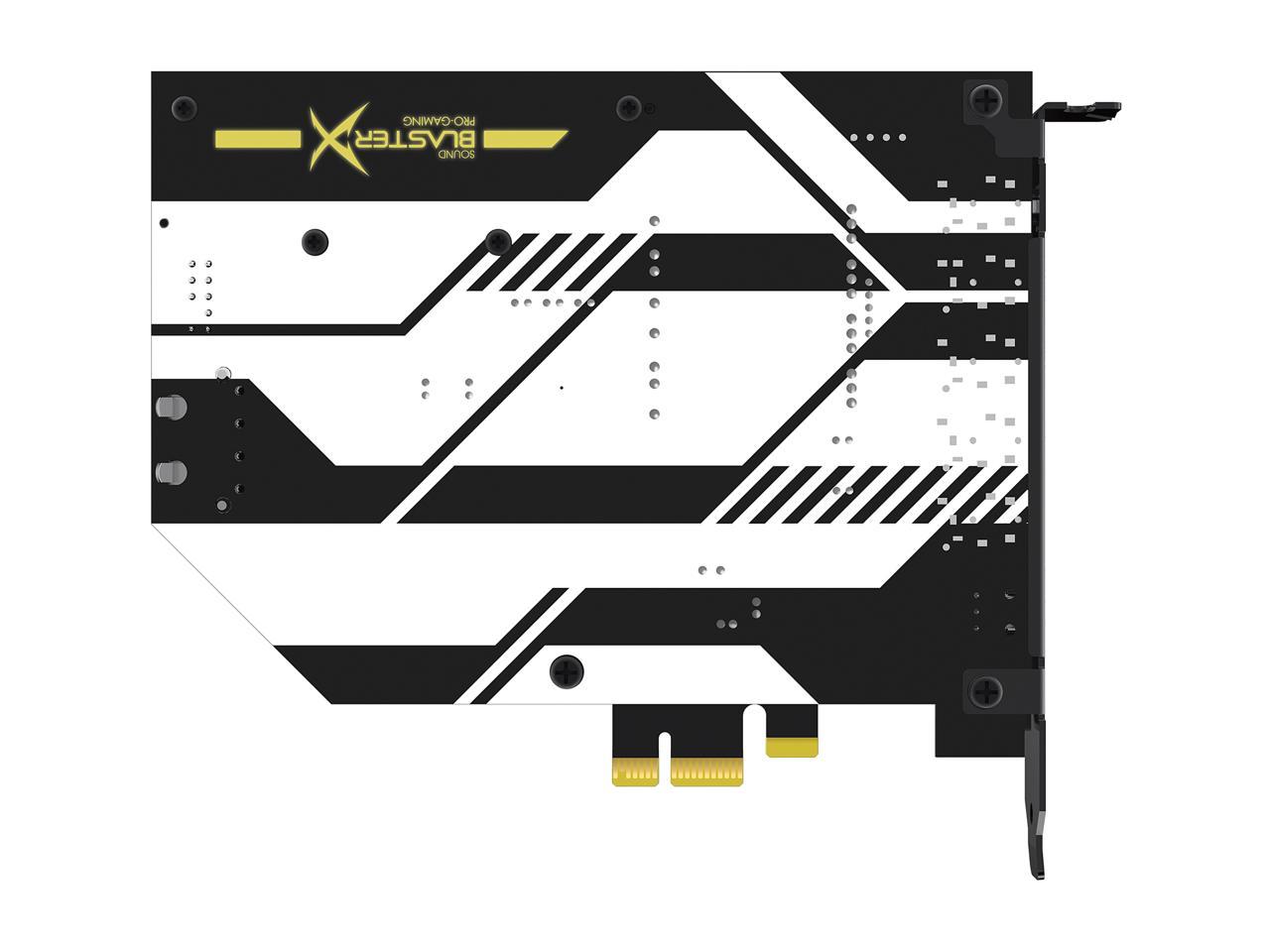 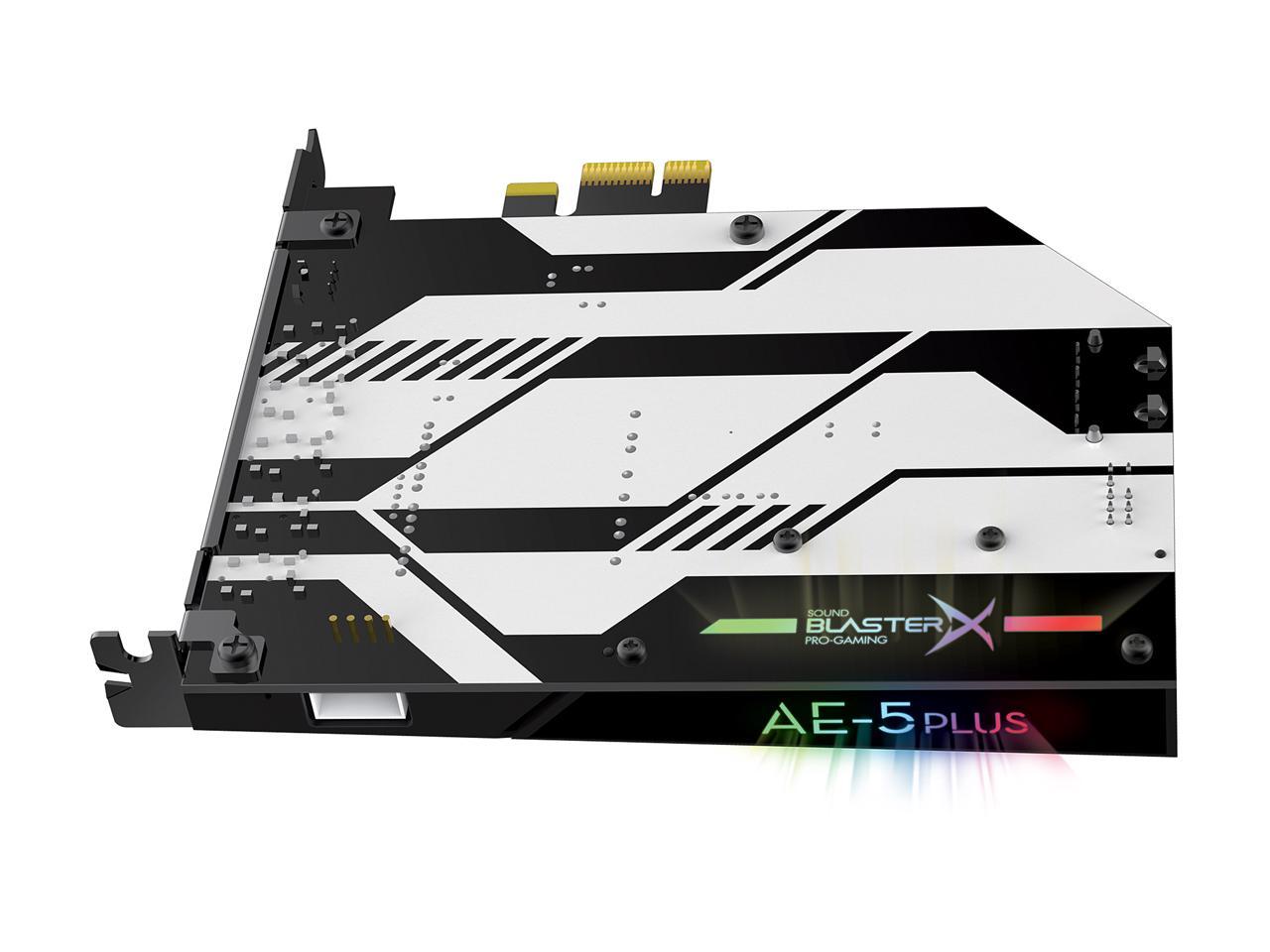 Learn more about the Creative Labs AE-5 Plus

Pros: -Sounds are much crisper and sharper. Bass also sounds deeper without distortion. Be sure to use 'direct mode' to utilize the best of the card. I'm not sure how to explain it, everything just sounds better! I haven't bought a sound card since 2007 but I figured I would soup up my new pc as much as possible - absolutely no regrets at all. I'll never go back to on-board audio ever again!

Overall Review: -I'm using 2.1 audio (Left and right speakers + subwoofer) and I had to plug it into "front left and right" input.

Pros: Easy to install, Window 10 Pro, downloaded most current driver and basically was ready to go, however if you wanted all the cool stuff too, you had to download the other software to take advantage of its other capabilities. Once I got everything installed and working together, there is a definite sound quality and sound boost over the built in sound on my motherboard. I truly felt like games and music were new, like it was the first time hearing it. I hear a lot more sounds in games I never heard before & music is completely different, more vibrant and life like.

Overall Review: You cant count tweaking the software and getting it all dialed in as a con. I know you will have to make adjustments & some of the capabilities aren't for everyone. I didn't use a lot of the items they said would make everything sound better. I went in and setup the equalizer the way I like, and everything just seemed to come alive. There's a lot more volume & the sound control is awesome, I have played it very loud and there was no distortion or any crackling sounds. It comes with an LED strip and needed cables to attach it to the card, however you will need to plug in the 4 pin molex (old school connector) to the card if you want to run said LED strip. I don't want the strip connected, so a non-issue for me, however may be a drag for others. You can also customize the colors on the card itself with the SoundBlaster software. It wasn't hard to get the needed software, just a bit of pain to go thru the website to download the software, which once you find it and download it; its all good from there. Just be patient when setting it up, took a little bit to get it dialed in & then it was simply awesome. My build: Thermaltake 71 view case ASUS Rampage VI Extreme Omega Intel core i9 9900X cpu overclocked to 4.5 ghz G.Skill 64 gig set - Desktop Memory Model F4-3000C14Q-64GTZR EVGA 3080ti Hybrid XC3 Ultra gaming Corsair H150i pro 360mm water cooler w/ 6 LL series fans setup as push/pull on radiator @ front of case EVGA Super nova 1300 watt gold completely modular PSU Razer BlackWidow Chroma V2 Razer Basilisk Ultimate wireless gaming mouse SoundBlaster X AE-5 Plus sound card Logitech z906 5.1 Dolby Digital DTS speaker system Aorus FV43U 43" QLED UHD 4K monitor

Overall Review: Yes, I would recommend this product to anyone using onboard sound. Im no audiophile, just your average layman and this card has improved my sound 100 fold. I had all volume maxed, before installing this card and everything sounded horrible. I could barely hear anything with all volume to max levels with my onboard sound. I installed this card, which automatically had master volume set to 50%, which was still too loud for me. I had to lower the volume from video controls even more. The clarity, surround sound, and dialog blew me away!, Just awesome!, you wont be disappointed, if your looking for better sound from onboard sound. Worth every penny!

Pros: I now have full control of my sound playback and it is awesome. Sound is clearer and crisp and clean. It is better than my motherboard sound and it comes with RGB to boot witch adds that extra lighting to my system, Very nice.

Cons: You have to switch between speakers and headphones manually in the control panel.

Overall Review: Recommend it to anyone who loves great sound.

Cons: - Pulseaudio is broken with this card, I have to use JACK as a hardware handler and patch into Pulseaudio (Easy once you set it up, but a pain to get it going when you don't know what's going on. This is not an issue on the card itself, but worth pointing out.)

Overall Review: To start, I have heard of issues with the Sound Blaster software in Windows, but since I don't own a copy of Windows, I cannot confirm not deny this. I purchased this specifically for recording through the line-in jack on the card. I have a Yamaha MiG 16/4 mixer running into it with a 1/4" > 3.5mm adapter on it, getting L/R channels. With the mixer off, the noise level is ~70dB, so that's the card itself (I do have this card directly above my GPU, which is a noise issue when recording, but that's on me, not the card.) All testing was done with the FX features turned OFF (via alsamixer, giving direct hardware control.) I knew that the Integrated audio on my board (Sound Blaster Cinema 3) was really good, but the line-in was lacking, thus the whole reason I bought this sound card. On the line-out, you can notice a small difference (I did an A/B test by patching both the X-AE 5 and the Integrated into my mixer and toggling each line in Pulseaudio). I tested it with some ATH-M50x headphones, so I could tell pretty well. If I were just playing audio, I would've stuck with the Integrated (Again though, really high-quality Integrated audio, the regular motherboard will see a huge improvement.) The line-in, however, that's where I saw the biggest improvement. I saw the noise level drop a good 10dB when I set both the Integrated and X-AE5 to the same levels. The latency of input went down a good ~12ms, and there is WAY LESS distortion when nearing the 0dB point. Running sine waves from a Moog shows that really well, both in ear and on wave spectrum. Normal USB ADCs/Interfaces can have who-knows-what tacked into it for "Audio Normalization." But I know this X-AE5 has all that turned off, which is a huge peace of mind for all the analog stuff I patch itno it. One thing people might like, the EQ'ing on this card is NOT software. It is pure hardware (reference AlsaMixer picture). This cannot be said of any integrated sound cards, and some dedicated cards as well. I actually wouldn't feel bad about runnign the dedicated EQ settings if I had to (I have an external EQ, so I don't.) Sure, the X-AE7 is a huge step up from this on paper, but if you're just looking for good audio-out, then just get this. Recording is superb too when you set it up properly (Windows can do... Anything with this card, I have no idea, and I have no idea how you'd turn everything off hardware-wise in Windows.) Buy it, slap it in, run it, enjoy it. You have my word.

Cons: None that I've seen

Overall Review: So far I have lived this sound card. Was easy to install and get up and running. The sound from it is amazing, I'm actually hearing sounds differently from the on board sound. And with it hooked up to a vizio sound bar and sub with a digital audio cable, my room is booming with sound

Pros: Sound is so much clearer from this sound card than the motherboard. It truly is a night and day difference. I have an old set of Logitech Z906 5.1 speakers, and it makes them sound like new again. I listen to a lot of music and the Sound BlasterX AE-5 Plus makes it sound so good now, with more definition and clarity. Granted i have subwoofer but the lows are punchy and tight sounding now. Gaming sound has been vastly improved also. Nothing sounds muddy or washed out.

Overall Review: I would definitely recommend this to anyone who is not satisfied with the on board sound card on their motherboard. Like i said it's a night and day difference.

Pros: This Creative Sound BlasterX AE-5 Plus has very Clean Sound Quality and does not Dull out at High Volume Levels as the Creative Sound Blaster Z did. The Creative Sound Blaster Z was a very Poor Quality Sound Card and the Software was even more frustrating. This AE-5 Plus sounds better than the EVGA Nu Audio and even better at Higher Volume Levels. The EVGA would dull out the High Frequencies at 90% Volume levels. The EVGA was way overpriced for what it was and had no What You Hear Software, so no Music Audio was not possible to Record with no Stereo Mix options available. That to me was an EVGA Rip Off to not include What You Hear Stereo Mix.

Cons: For Audio Studio use, stay away from the EVGA Nu Audio Series. No allowed Music Audio recording, as it is not possible due to the lack of Quality, and no What You Hear Options.

Overall Review: Creative finally got another good Sound card out. The Creative Sound BlasterX AE-5 Plus is a very Good Card and decent Software, an it also has the Native Speaker Check Testing Software that the XFI Series had.