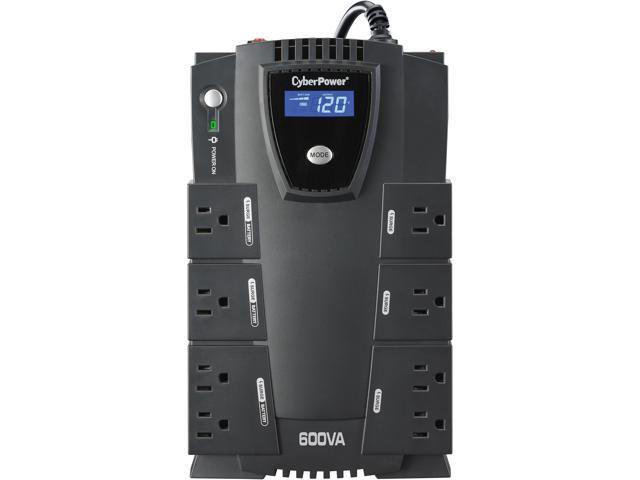 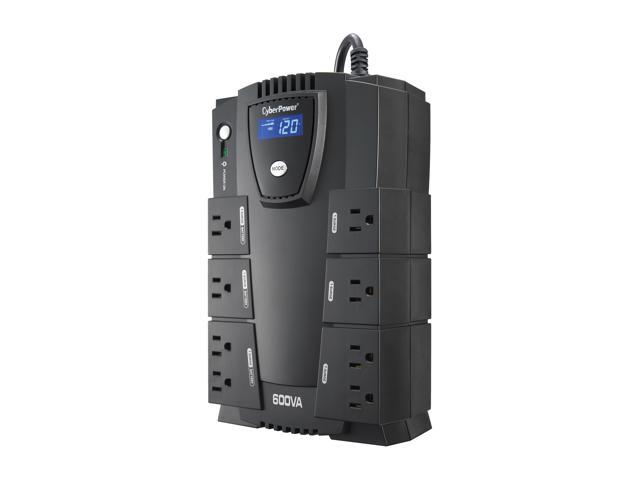 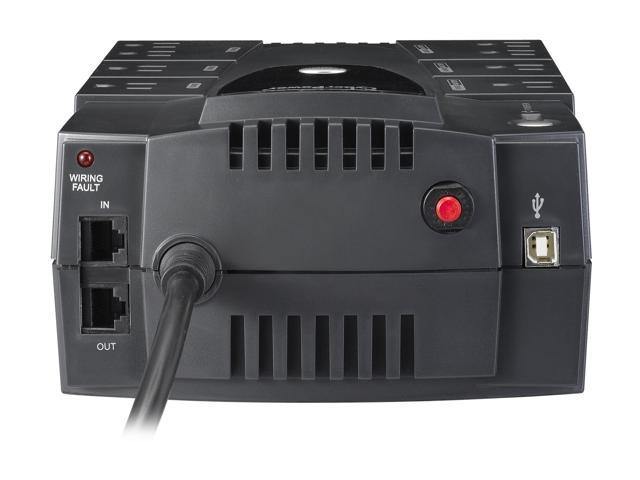 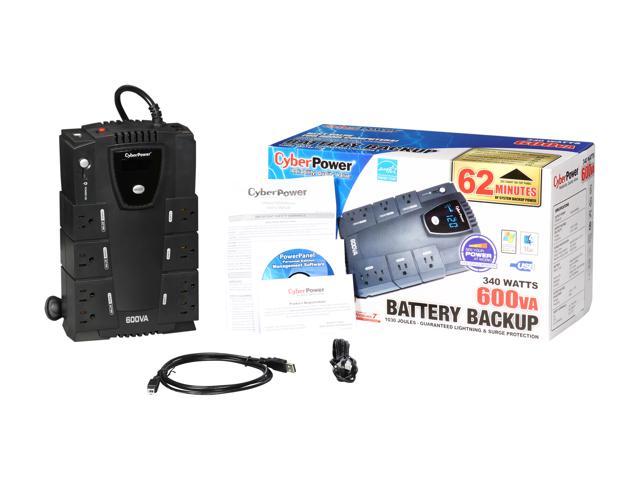 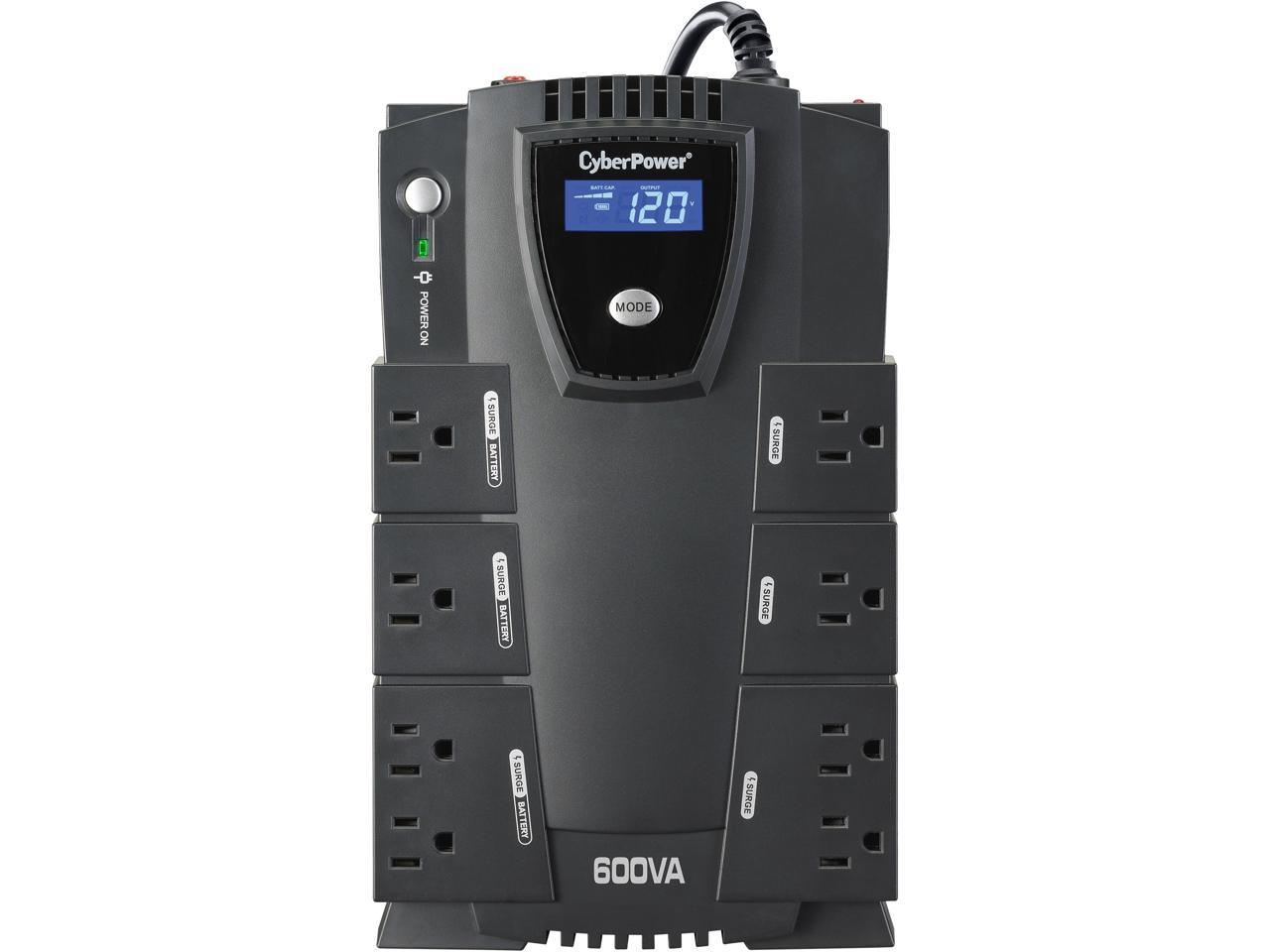 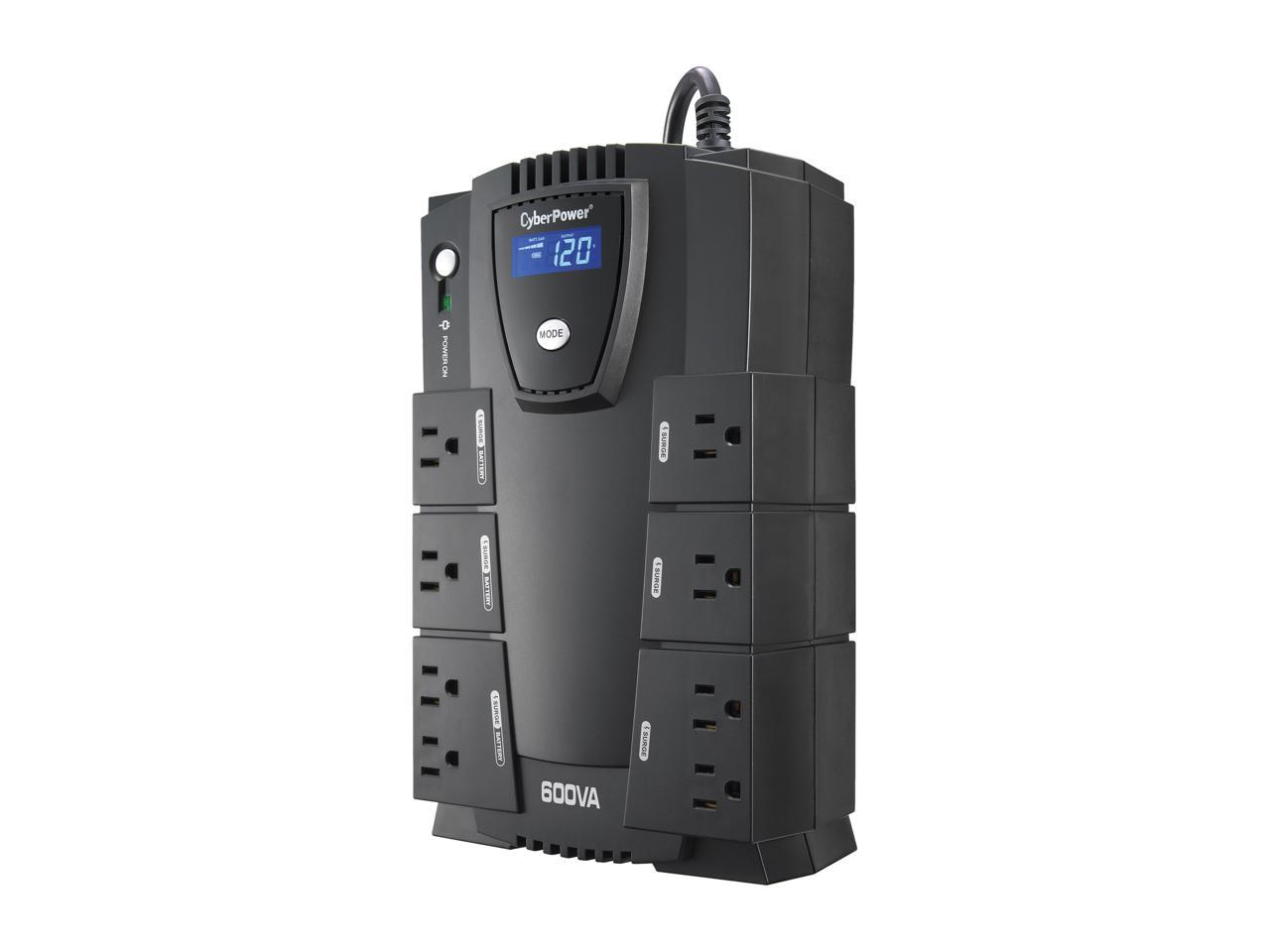 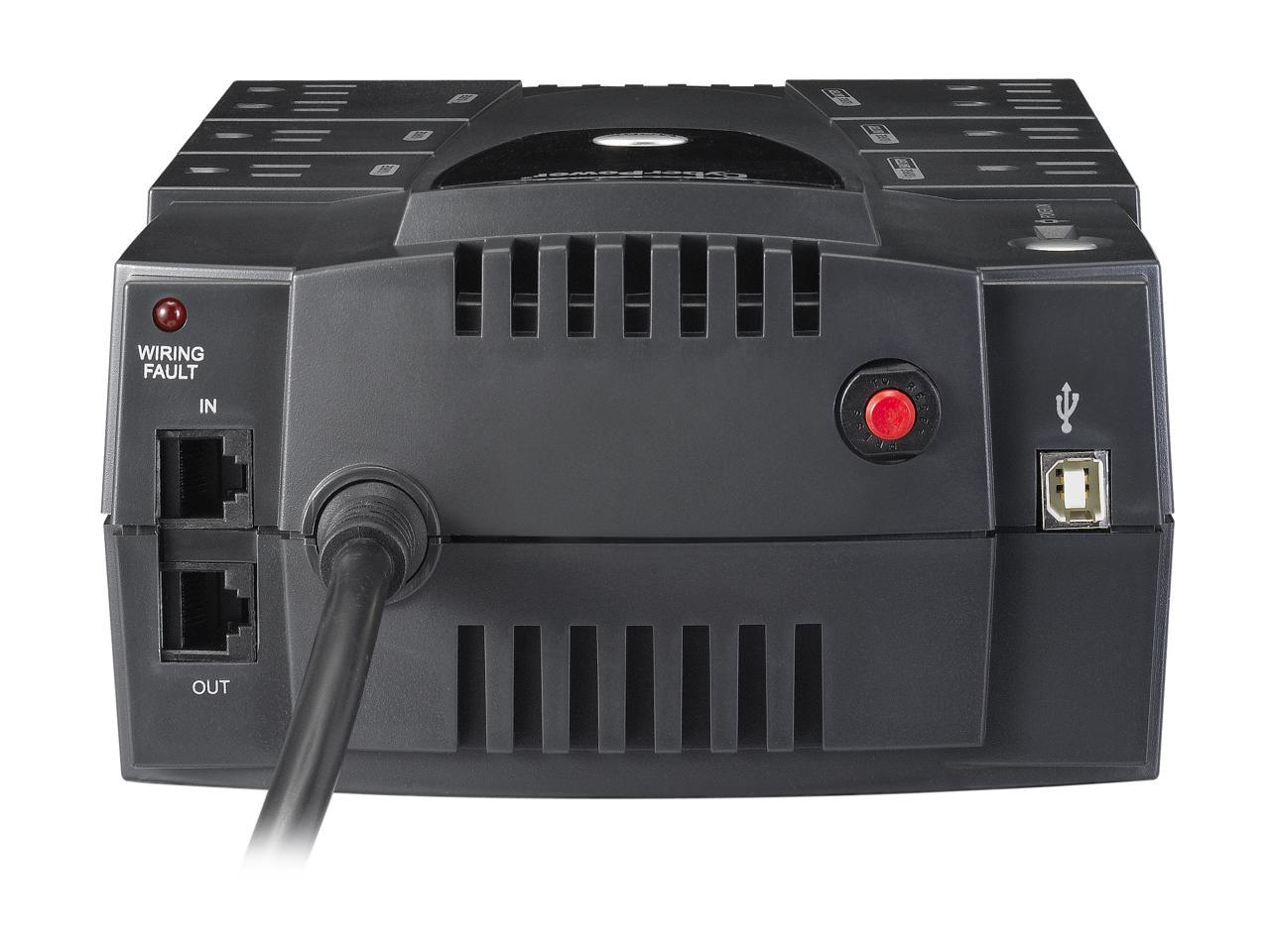 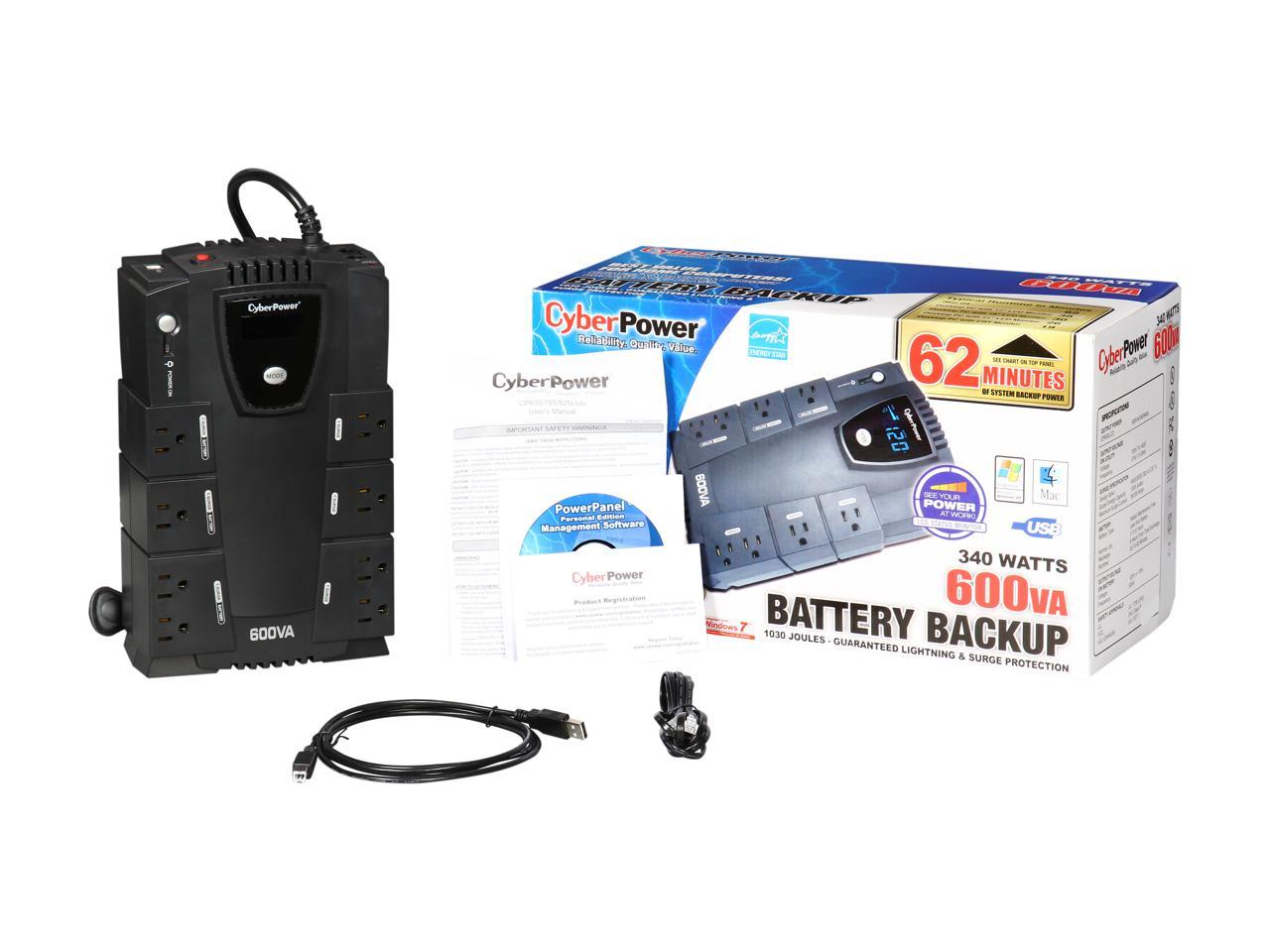 Learn more about the CyberPower CP600LCD

Pros: Due to increase of power failures a customer of mine wanted a UPS unit for his server. I recommended a different brand with a bigger battery (and more expensive) but he wanted to save a few dollars. So far everything appears to be working. Battery was already connected and ready to be charged. Installed the software and connected the USB cord, it reads that the unit is at half capacity and will provide ~20 minutes of run time (though it would drop down to 10 minutes every so often. Small server, 20" LCD monitor, DSL modem, and router are plugged in.

Cons: The packaging lists Windows XP as the recommended OS, but has a Vista sticker on the front. Wondering how old this thing really is.

Overall Review: A great deal for home users, but I don't feel confident using it for a business. But my job is to make recommendations, and work with anything my customer's want.

Pros: I like this UPS because a) it's inexpensive b) I can turn off the audible alarm. The latter is important because I don't want a UPS that makes noise should the power company drop power when I am trying to sleep. Or any time for that matter. As a bonus, the software shows the Wattage. I tested the software on Windows XP 64 bit and Fedora 17, by unplugging the power cord and to see if they stays quiet and they do stay quiet. I haven't fully tested the functionality of the shutdown / startup features, but you can specify both according to a weekly calender. The shutdown feature definitely works on the XP 64 bit system.

Pros: Nice unit - high output. Run time is not long, but this is due to it's physical size as only one battery will fit in the unit.

Cons: This unit died in a surge 60 days after purchase and we lost all of the equipment (Linksys 48p switch and access point) that was plugged into it. All other UPS units are APC SmartUPS and BackUPS and had no problem with the surge.

Overall Review: The only reason I docked a star was because the other APC units did their job. Now waiting to see how well Cyberpower holds up on warranty claims.

Pros: Relatively compact design. Affordably priced. Outlets suitably-spaced to accommodate "wall wart" type power supplies. Lengthy power cord. Can be used on desktop or floor either lying down or standing upright. Can also be wall-mounted via keyhole slots in rear. Arrived 99% pre-charged. Well-packaged for shipment. Connected to load and then removed AC power, UPS kicked-in and began powering devices with no hiccups or issues whatsoever. Has an LCD display, not that common in this price/wattage range. Since I do not have my unit connected to a PC (it is a backup for the alarm system,) the display panel is critical for determining the status of the UPS. Protects an RJ-11 OR RJ-45 (but not both) circuit as well.

Cons: Simulated sine wave output, this UPS is NOT for ANY PC/device using an active-PFC power supply!! It is fine for non-PFC PCs and most other electronic devices, though, i.e. modems, routers, switches, HDD enclosures, phones, alarm systems, video hardware, etc. This fact is listed in the specs, though, so no Eggs deducted. Remarkably heavy for its size, but this is an issue with all UPS, so no Eggs deducted, simply noted for user awareness. Only -4- surge/power protected outlets. If you have any "wall wart" type power supplies, likely only -3- of those will even be accessible, which is fairly limiting unless you use an extension cord for more outlets. This, however, may not be advisable due to the possibly of overloading an individual outlet, I do not recommend it. This unit should have -5- power/surge outlets and only -3- surge-only outlets, in my opinion.

Overall Review: We've only had this unit online for about a week, but so far it's running like a champ, no issues. It's being used as backup power for our alarm system and it's well-suited for the task. The alarm has its own internal backup power, but with this UPS on the front-end, we're up to about 3 hours total backup power, long enough to bridge the average occasional (or intentional) AC outage. I really do wish ALL the UPS manufacturers would do a better job of informing customer about the difference between simulated vs. actual sine wave output on their products. Specifically, that active-PFC power supply units (PSUs) should ONLY be run on true sine wave power, NEVER on simulated sine wave. 99% of customers will likely only find an active-PFC PSU in a higher-end desktop PC, but you need to be sure before connecting to a simulated sine wave UPS, as this can rapidly degrade the PSU, if it will even run at all. This should not be considered a flaw in the simulated sine wave UPS, just knowing how to utilize the correct product for your specific application(s.)

Pros: It works as stated, make sure you use the provided software with a usb cable to the pc if you want it to detect a power failure loss properly. Easy to read lcd display, the software is great too, easy to use with alerts.

Cons: I wish the display stayed on full time, you have to click it once to make it visible.

Overall Review: You don't need as much power as you think you do, I run a gaming pc with a 43in led-lcd tv (as a pc monitor) off the battery backup and I get 15 mins when power drops out. Don't waste money on higher VA units if you don't need more time, in all honestly 5 mins is usually more than most anyone will need to do a safe shutdown or carry you through a power interruption.

Cons: - Battery leads can come off during shipping

Overall Review: When i first received this UPS, it wouldn't run off of the battery, and would beep constantly unless I muted it, and the green light would flash constantly. According to the software and the LCD display, the battery was 100% and present, but nothing would run off the battery and self tests would instantly fail. My initial thoughts were, "shucks, its a dud." When I came back to the office on Monday and it was still flashing, I decided to check the battery and see if I could find anything wrong. I removed the battery and the wire leads slipped off too easily for comfort. I re-connected the leads securely and closed everything back up. I pushed the power button and for the first time the UPS was working, with a battery charge of 40% and capable of powering the computer by itself without wall A/C. Since then I've charged it up full, run thorough tests and all is working well. can't really dock an egg because the battery likely disconnected during shipping, but the false positive on a disconnected battery is definitely a red herring when you are trying to diagnose the problem lol.

Pros: Digital LCD Readout, Relatively inexpensive for a decent unit. Lots of outlets. Solid Quality Unit. 2 Year Warranty. Tech support is tops if you ever do need them.

Cons: The whole upside down mounting thing, but not a problem in my situation.

Overall Review: I just bought another 6 of these to replace aging or failing units from other manufacturers on users desktops. All of them worked perfectly out of the box. Tech support is great - I had an older unit barely still under warranty but quit functioning after a storm. I opened a ticket, and they sent me a new battery and brought it back to life. No Hassle, No charge, not even shipping. That's service.

Pros: Linux support (its a command line utility and daemon, so its not tied to any specific desktop environment), nice LCD, adequate power, good price

Cons: no way to keep LCD on, beeped like crazy when i first plugged it in.

Overall Review: I am using this to protect my small home server (CentOS), as we have had frequent lightning storms and brief power outages lately. The Linux utility allows you to specify shell scripts to run at certain events, such as blackout, low battery, critical battery, etc. As my server only draws 68 Watts, it shows an estimated battery runtime of near 45 minutes. Hoping to see the system uptime get into the months. :)