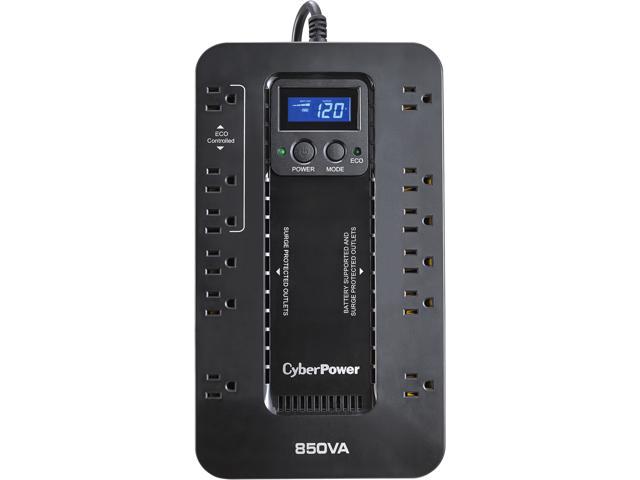 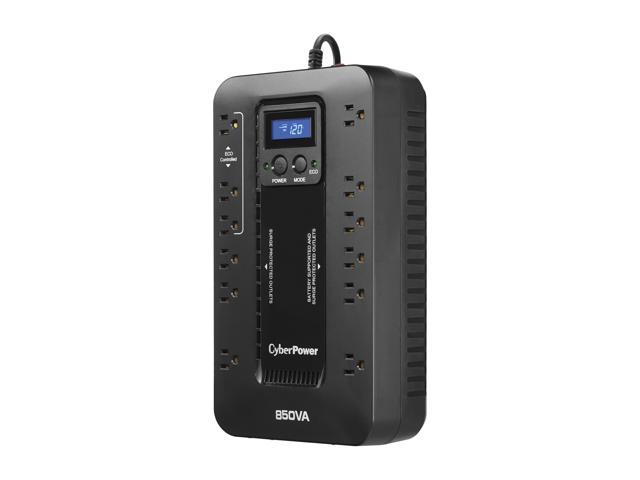 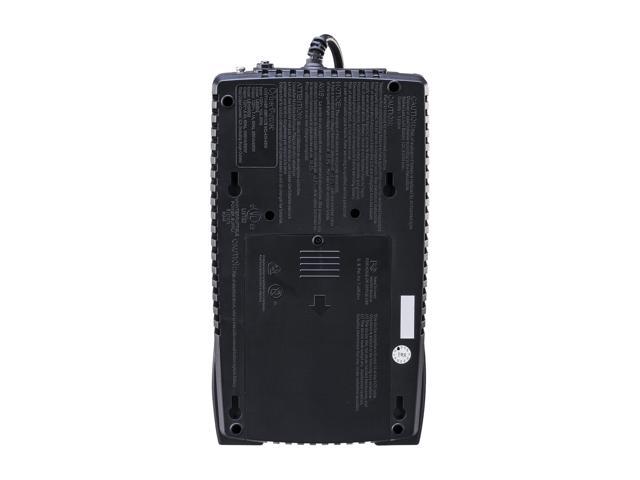 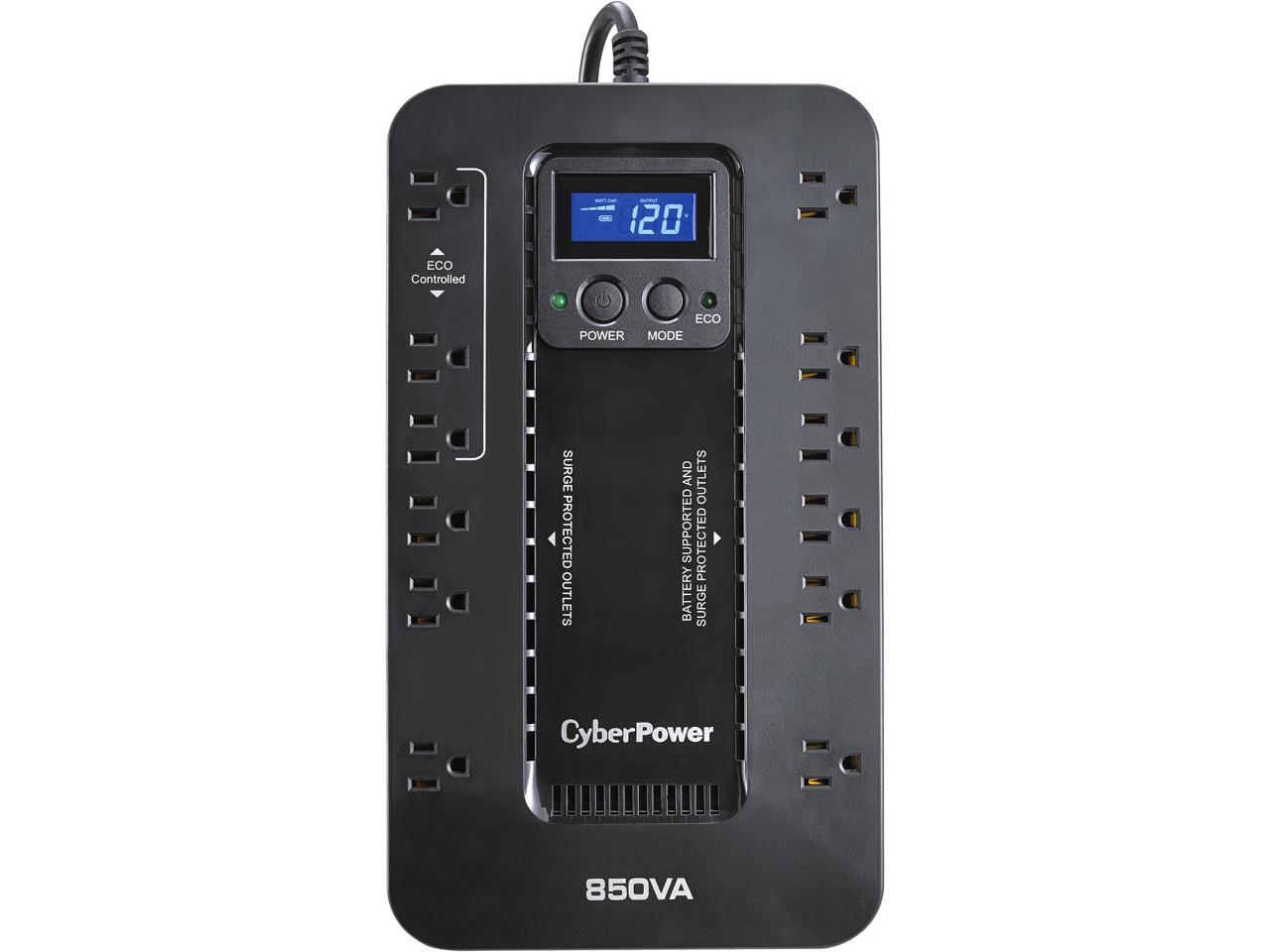 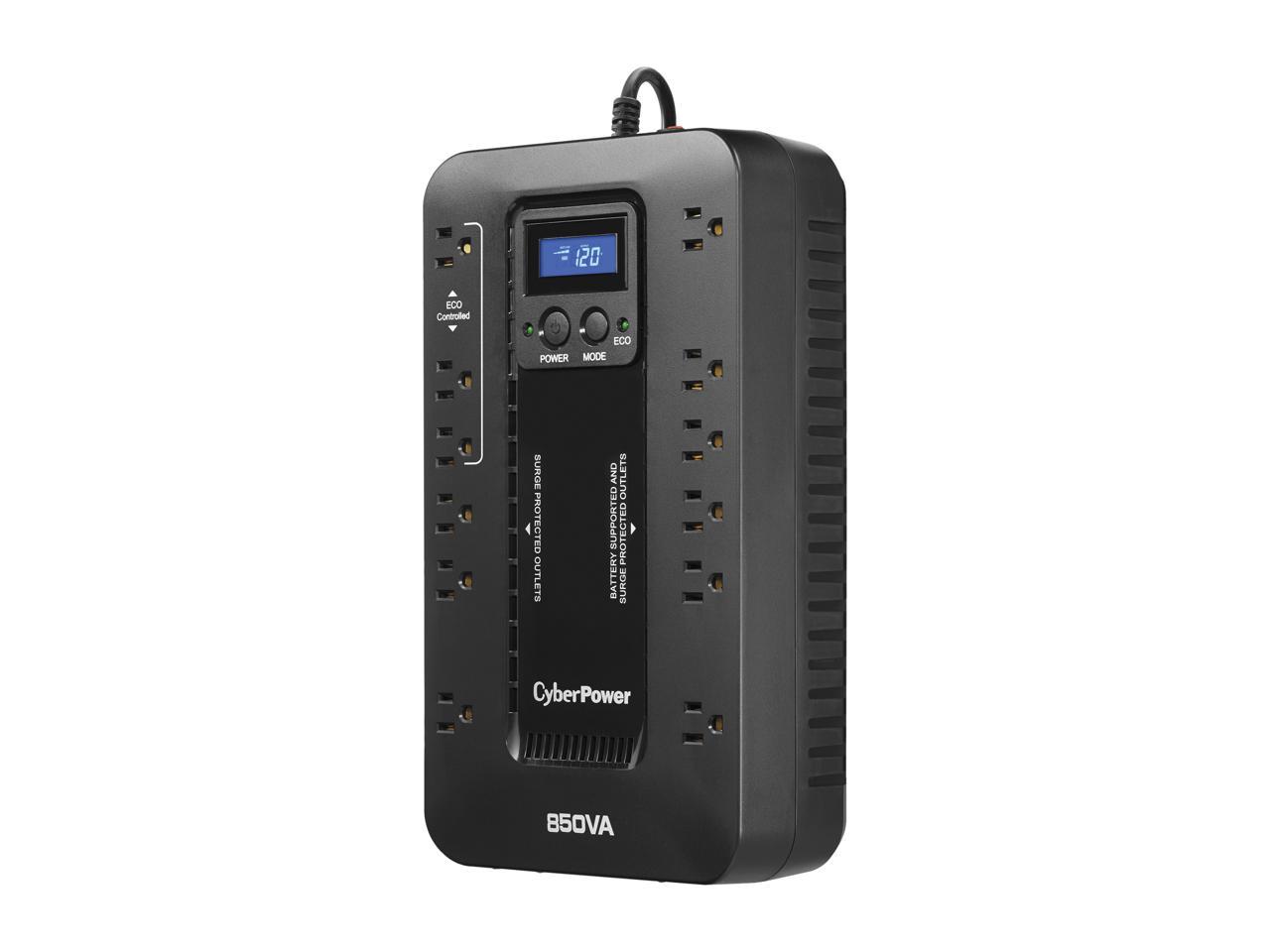 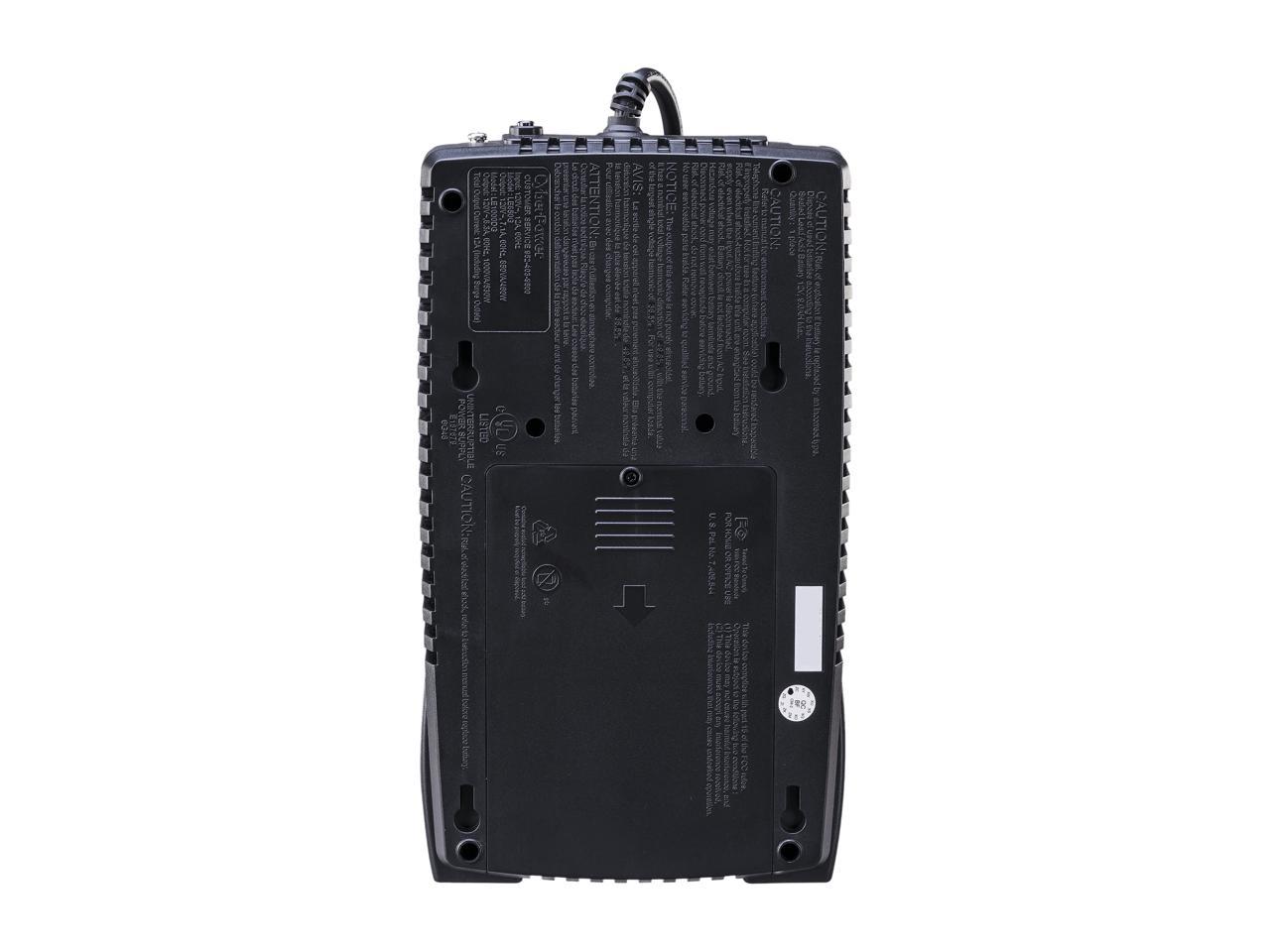 Learn more about the CyberPower EC850LCD

Pros: The included management software is great • Monitors your current power usage in almost real-time (About every 10 seconds) • Can set the computer to turn off properly when the power goes out based on how much power is left on the UPS • Shows information about the charge level of the battery • Your estimated runtime if the power were to go out • It has a summary page showing every power outage, under voltage and over voltage event, when they happened and for how long • You can set schedules for when you want the computer to turn on or off • The notification sound for when the power goes out for the computer’s speakers and the in the UPS can be turned off if so desired • It beeps about every 30 seconds when the power is out and its loud enough that you notice it but not overly obnoxious • The exact voltage considered for under and over voltage has a range that can be changed if needed • It even has a self-test function to make sure the battery is functioning normally • The program also doesn’t utilize any CPU resources and only takes up 23 MB of ram on my system to run • As a note the battery will need conditioning as mine dropped from 100-69% in about 2 minutes and then after testing it again on the same charge it dropped from 69-57% in 1 minute on the second test (This was all after the first full charge).

Cons: The software however great the features looks old and cheap, it looks like it was made for Windows XP. On my machine instead of shutting down automatically after my preset amount of time, it went into hibernation which was bothersome (Despite the program saying it would shut down). I fixed this by disabling the hibernation function in Windows completely but I assume turning off Hybrid Sleep and Hibernation in the power settings menu should also do the trick to get it to shut down instead of hibernate. I might have missed it in the instructions but don’t plug in the USB before your system is up and running as it caused a BSOD for me since it had no driver yet. It’s an easy fix as unplugging the USB solves the problem and the driver was plug and play once the system was running.

Overall Review: If you are getting a UPS that will be used on a computer then I highly recommend buying one that has a connection to your computer with some management software because it makes all the difference and there really isn’t a price premium for it either.

Pros: Eco mode is a nice idea, although the time between turning off and on should be increased. The power flickers on and off during boot up.

Cons: There was a lightning strike near my house and everything connected to the battery powered plugs on this UPS got fried. The surge protected plugs did their job, but the battery power plugs did not. I sent the UPS back to CyberPower and they claimed they couldn't find any damage and would not honor the warranty. I know for certain the UPS was damaged. I hooked it up to my laptop after the lightning strike and the CyberPower software kept popping up saying the UPS battery was low, even though it showed it was charged to 100%. It had never done that prior to the lightning strike. There was clearly some kind of damage.

Overall Review: I will not be buying CyberPower again.

19 out of 21 people found this review helpful. Did you?
Manufacturer Response:
Thank you for your review. The EC550G does have built-in surge protection through out the unit, including the battery power side. For your protection, CyberPower offers a $100,000 Connected Equipment Guarantee and a 3 year warranty that includes the battery. The Connected Equipment Guarantee would pay to cover any damages to connected equipment in the event of a surge thru the UPS.
Ben N.
Ownership: 1 week to 1 month
Verified Owner
Does what it should3/16/2014 12:00:54 PM

Cons: Tripped the integrated circuit breaker running both my space heater and the startup of a 1U rackmount server, which is a pretty huge load so less of a con and more of an FYI.

Overall Review: The LED display is nice, and I had the opportunity to test the battery backup when I blew the circuit breaker on the UPS by trying to start the server it's protecting while I was running a space heater through one of the non-battery backed outlets. That's a pretty massive load and way above the rated capacity so I don't consider it a real flaw, but I wanted to mention it. Resetting the breaker was as simple as pushing the button back in, so this was not a big deal at all. And as I said, the battery backup worked perfectly and maintained power to the server. I'm very happy with my purchase and wouldn't hesitate to buy another one if/when I have need of another UPS.

Cons: On-off switch failed after 2 years. Had to buy a separate on-off switch for the plug. Eco mode cuts out from time to time and has to be reset.

Overall Review: Contacted customer support about the on-off switch problem. No reply. I do not recommend this product.

Pros: I'm using this UPS to provide backup power to the following: "Cable Gateway" (computer modem/IP phone) network router primary desktop computer 1 display/monitor cordless phone base unit. When the UPS is in standby (on AC power) mode the Power Panel software shows the "battery capacity" @ 100% and the "remaining battery runtime" to be 37 minutes at the load level created by the equipment listed above. I've been present for two power outages since installing the UPS. Here are my observations: The first outage was just a 2-3 second dip and when I opened the (previously downloaded/installed) Power Panel software the power had already returned. The software indicated that the "battery capacity" was 91% and the "remaining battery runtime" was 31 minutes. The 2nd outage lasted about 4 to 5 minutes. This time I opened the Power Panel software while the power was out and was observing the "current status" screen when the power came back on. When the power was restored the software indicated that the "battery capacity" was 73% and the "remaining battery runtime" was 21 minutes. These readings indicate that the battery discharges faster than one would expect based on the information shown when the UPS is "fully charged " and receiving AC power. While based on a VERY small information sample, I think the "remaining battery runtime" figures are probably skewed to the "charitable" side and one should not expect to keep on working for very long if the power goes out but rather should save their work and shut things down in an orderly fashion. Additionally the software is designed to automatically do a controlled shut down of the computer where the Power Panel software is installed either: a ... after 5 minutes of no AC (to preserve the backup battery for subsequent outages). or b ... when the battery is 5 minutes from depletion (to keep the protected equipment working as long as possible). In summary, I'm pleased with my purchase and here's why: Typically, in my neighborhood, power outages are more like the first one I described above ... just seconds long, rather than minutes or hours. With the most recent equipment upgrade, Comcast (my internet provider) no longer provides a backup battery for the Cable Gateway unit. As a result, whenever there was even the smallest flicker in the AC the modem/phone/desktop/router would crash and reboot (a rather time consuming evolution). Installing the UPS made more sense to me than buying a $40.00 backup battery for the rented Gateway equipment. Now, instead of the modem and router and desktop and phone crashing when the AC hiccups, things just "keep on keeping on" ... a very good thing in my opinion. And, it was on sale as well. So, this purchase gets a smile from me along with a 4 or 5 star rating.

Cons: None to date.

Pros: I've had excellent luck with Cyberpower products but...

Cons: ...I just found out that through Cyberpower's chat that there is no replacement battery available for it even though the battery is replaceable and the UPS comes with battery replacement instructions. The Cyberpower chat rep said there was no ETA for a replacement battery but suggested that it would be covered under warranty. The voltage readings are 1-2v low. This was verified with my DVOM and another UPS. Also, directions are a bit vague about what some of the features are and how to use them.

Overall Review: While the warranty notice that came with the UPS doesn't specifically exclude batteries, I'll be surprised if the batteries are included in the three year warranty and if the batteries even last that long. Also, it would be a shame to have to throw away the UPS after the warranty runs out just because replacement batteries were not available. If that happens, I'm switching to APC.

Pros: - Has a nice display - Cheap

Cons: - Failed completely by 8 months in - Display becomes unreadable with anything but a straight on viewing angle

Overall Review: - Included software works with only one plugged in UPS at a time - After device failure, the manufacturer required that I pay return shipping for RMA (which was more expensive than the original sale price)

6 out of 6 people found this review helpful. Did you?
Manufacturer Response:
Thank you for taking the time to provide feedback regarding the CyberPower EC650LCD. We are sorry that you had a bad experience with the UPS unit you purchased. . CyberPower offers an industry leading 3-Year Warranty on all of our UPS products, which also includes the battery. While we do not pay the shipping cost to return the UPS for repair, we do pay for the shipping cost to return the repaired unit. We understand that you have already contacted us to take care of replacing your damaged UPS. Please let us know if there is anything else we can do to completely address your issue and ensure your total satisfaction. Please contact us at 877-297-6937 M-F 8-5 CST, or priority1@CPSww.com.
Anonymous
Ownership: more than 1 year
Verified Owner
Workhorse3/2/2015 6:09:55 AM

Cons: - Software is just ok. Works for the most part; gives me all the correct info on a current status... The history seems week. It doesn't seem to tell everything that happens (i.e. 30 second power outage, 1 second brown-out, etc...)

Overall Review: I tried a couple of this units at first because of the price and cool screen info--without the need for software. I was moving from APC which I always loved and trusted--still do--but I have been very impressed over the past 2 years with these units. I've switched over to about 15 of things units over the past two years and not even a hickup. Really falling in love with them.