Purchases from these Sellers are generally covered under our Newegg Marketplace Guarantee.
104 Ratings (88% Positive)
Sold and shipped by: Ebiz OfficeContact Seller
Ships from United States.
104 Ratings (88% Positive)
On-Time
Delivery
95.79%
Product
Accuracy
92.63%
Customer Service
Satisfactory
93.02%
View All Seller's Reviews
This item is currently out of stock and it may or may not be restocked.
Out of Stock
Price Alert
Add To List 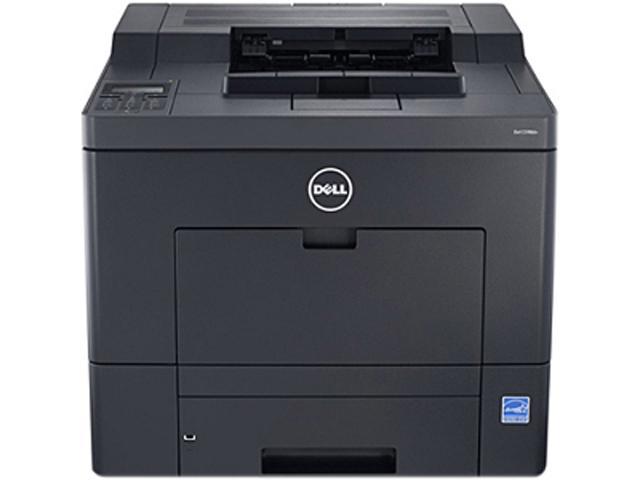 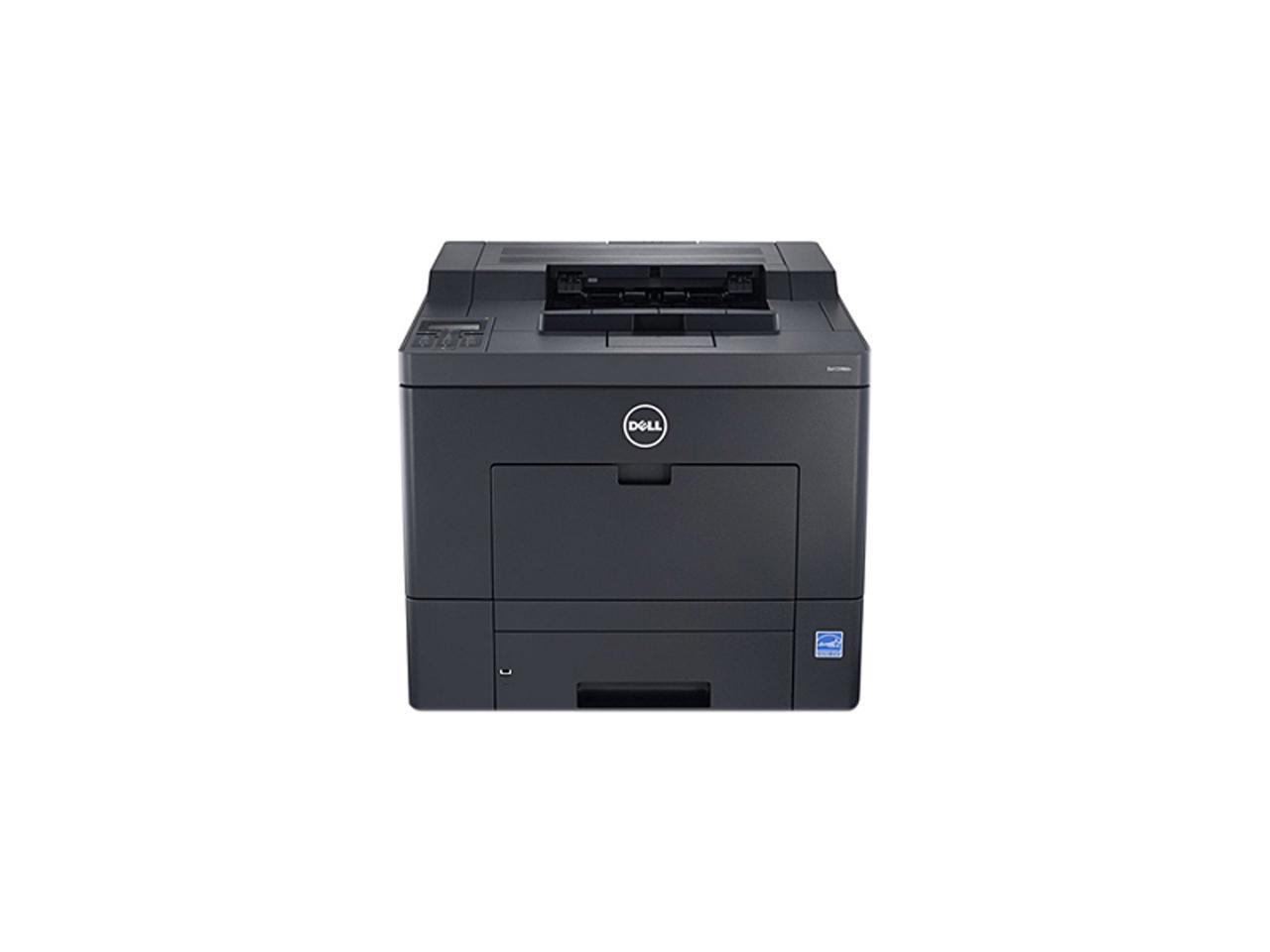 Learn more about the DELL C2660DN

Pros: I got this color laser printer (C2660DN) almost on a whim, because I already have a color printer, but that one is aging and when I saw this, I decided to give it a go. When it arrived, we unboxed it and set it up. If you've set up printers before, you know the process: remove the transit tapes, put in the tray, power it up -- except, curiously, the instructions say to put the tray in AFTER turning it on. We did that, and almost like that the printer was ready to go. The included toner cartridges are already installed in the printer, and I read that they are not small-capacity "starter" cartridges, but are all four the standard-capacity carts. That's rare, but so far has been welcome. We printed a test print and were amazed at the quality of the result. So next we began to go at it in earnest. We downloaded the drivers from Dell, and that was easy enough but installing them proved just a little confusing, as the unzipper program gave us no chance to specify an unzip location. Well, OK, we can live with that. The driver established itself with one of those "WSD" things which everyone dislikes, but we put a static IP into the printer and connected via Ethernet cable; with that as the print port, the printer lit right up and we were printing amazing color images seconds later. We were very pleased with the results; this was unlike any other printer I've ever used. Even the color printers at school, where I work, could not match this quality and they cost thousands of dollars. I had just a couple of weeks before purchased a professional photo-quality printer and this Dell's results almost made me regret the other purchase (almost). The duplex (two-sided) printing is fast and automatic; the colors are crystal clear, the images are sharp and clean, and they look just about pro-quality. We tried a few high-color, high-density images and they all came up as color-matched as you could want. We were very impressed with the output of this printer. The control system at the printer is a dream to operate. Each function is nicely labeled and the menu selections are clear and understandable. The control keypad is great, with easy-to-use buttons. The display isn't anything special, but it too is clear and easy to read, nothing fancy but perfectly usable. The printer has features we will likely never use, but you might. It has the ability to secure documents, for instance, which means the queue will accept a print job but you have to go to the printer to enter a four-digit code (which you set up in advance) to then print it. This just gives you a layer of security so the wrong eyes don't read your document before you do. The printer can go wireless, but that component is actually a separate purchase. From Dell, it is rather costly but you can easily accomplish the same thing by simply plugging the Ethernet cable into a wireless router, which just about anyone with wireless at home already has. That limits where you can position the printer but if true built-in-device wireless is a must for you, you can get the adapter from Dell (or probably you favorite on-line electronics site). Once a print job completes, the printer says so with a little "ding" sound. You can set a similar sound for other operations, such as paper jam or paper out; and you can turn this sound off if you don't like it. It isn't loud or obnoxious, so we're keeping it on. The printer has a 50,000-page-per-month duty cycle, so it is ready to deal with most small-office business use. That's a lot for home use, but it also means it'll likely last for more years than you'll be wanting to keep it around. It isn't small, but again in an office environment, it's great. It's print speed is quite good (28ppm) and that claims to be for both BW and color; we haven't timed it, but the print speed is more than acceptable. It goes to sleep to save energy (you can adjust how long before this happens) and uses low-melt toner, which means less heat and thus less electricity to operate it. Waking up from that sleep mode takes a few seconds (14, I think) but for the most part, what's the rush.

Cons: Well, despite the very favorable opinion of the printer given above, there is one quite terrible aspect of this printer which, had I known it before, might have made a difference in deciding to buy it. It's rather simple, really: The Dell toner cartridges for this printer are OUTRAGEOUSLY expensive. Hundreds of dollars for a complete 4-toner set. Over $500 direct from Dell! The very cheapest I could find them was twice as expensive as the printer itself. It's crazy, but you would be better off just buying a new printer rather than buying replacement toner carts! Of course, you'd like to have extra-capacity carts, but just buy two printers and it's still less costly than buying Dell toners. You can certainly get compatible carts, but I've read horror stories about several brands; in particular, the yellow cart tends to "explode" and discharge toner all over the insides of the printer. I got this printer because it was affordable, but the Dell carts are little better than highway robbery; they CAN'T be that expensive to manufacture, especially if third-parties can offer theirs at 1/5 the cost. I do WANT to buy original Dell carts, but honestly, who could afford to. I will almost certainly end up trying a compatible, but I may live to regret it.

Overall Review: DELL: PAY ATTENTION. Your toner cartridges are stupidly expensive. You'd sell four times as many and make the same profit if you lowered the price to something closer to your competitors' prices. I know, you think theirs are junk and maybe they are, but people are buying them anyway because who can afford yours for crying out loud!

Overall Review: Printer seems very rugged. Dell quality comes through with this printer. They seem to make the best printers, monitors, and computers. It is quiet and fast.

Cons: The first one I purchased lasted over 2 years before it finally deteriorated. It gets a LOT of use, so I purchased a replacement. The replacement has lasted only 2 months.

Overall Review: I'm going to buy another one today because I have so many replacement print cartridges stockpiled, otherwise I would get something else.

Cons: Duplex printer jams on card stock. After printing only 85 double-sided Christmas cards, already out of yellow ink. Had to go to the printer every time a new batch of same file being printed, and re-iterate the paper settings.

Overall Review: I really love the quality of the printing, but was very frustrated by the silly problems encountered while printing in duplex mode. Also quite angry that I have already had to purchase yellow ink, after only printing my Christmas cards. Since the ink is really expensive, at this rate, I will have very quickly invested more in the ink than in the printer!

Cons: A bit loud when printing. No Wireless networking. Big enough to take up an entire coffee table. No scanning capability (not that it is meant to).

Overall Review: I'm definitely glad that I purchased this printer. My wife home schools our first grader, and we've made it through more than a semester of non-stop worksheet printing without having to replace toner cartridges yet. We are low on black, but not out yet. I like that I had no trouble finding a low-cost alternative to the OEM Dell toner cartridges. I have purchased some, but not yet tried them out. *fingers crossed* The lack of wireless networking is the biggest bummer, but at least I had no trouble sharing it with Windows 10, and installing it on both my wife's and son's PCs. Since my PC is almost never turned off, it was easier than running another network cable across the room to it.

Pros: This thing is fast and the output is razor sharp. Big paper tray.

Cons: -Big -Almost impossible to find warranty info on this. I contacted Dell and it took them a couple of minutes to find out. Here is what they said- This printer has 1 yr warranty. Get technical support for any printing issues via phone or online during your standard 1-Year Limited Hardware Warranty*. Also, enjoy 1-year Advance Exchange* after Remote Diagnosis Service*." Plus the warranty is extendable up to 2 - 5 years."

Overall Review: I needed a color laser printer for printing regular day to day stuff as well as doing a 4 color print on heavy stock for my business products. The first test of an image came out excellent. I was pleasantly surprised. I then tried to print some very densely spaced small text two sided documents in duplex mode. It spit them out at 10 per minute and they looked great. So far I absolutely love this printer. I can't tell you how it does on card stock yet. I have a bad printer cable ( got closed in a drawer) so bigger jobs like images either time out or spit out 20 pages with one line of code on the bottom. My old printer did this too, so it isn't the Dell's fault. I am very much looking forward to trying that with a good cable. The one image that it did print looked excellent. One of the big things that got my attention was the cost of supplies. If you go aftermarket you can get all 4 toners for something like $36, and that is for a 4,000 print kit. Individually they are about $12. Even if you got 1/10th of that yield it would still be 0.09 a print. I have only had it a couple of days but I am very impressed with this printer.

Pros: Easy to install/set-up. Fast printing. Duplexing. No jams even with recycled paper.

Pros: Strong, solid construction. Prints very clear in color. Prints very quickly. Does double-sided copies very well. Excellent for light usage (which is what we use it for...mainly school projects or printing off bills, PDFs, etc.). Not sure about continual use, but it seems like it would be sturdy and constructed well enough to hold through moderate use. THE PRICE! Wow!

Overall Review: I'd give this 4.5 stars if I could, but it's worth the money. My cons have nothing to do with performance. It would serve as an excellent budget color laser for a small business, I would imagine, and has served me well.