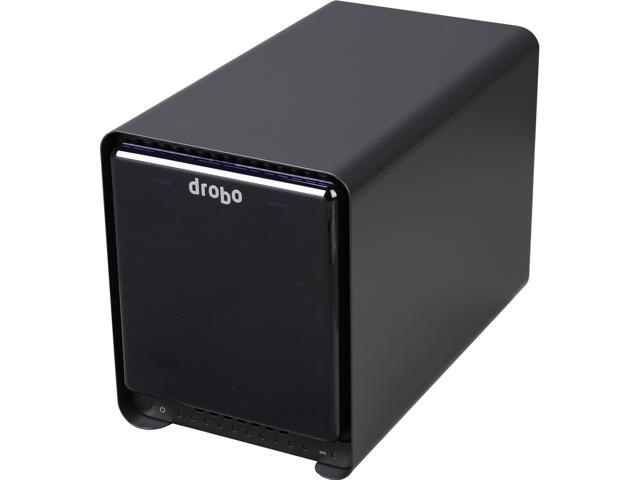 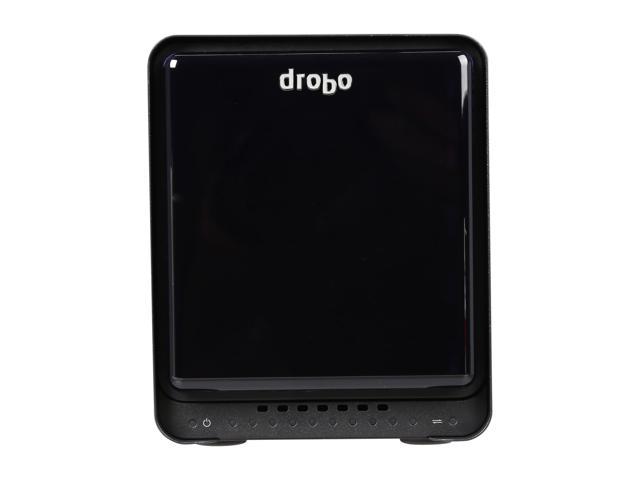 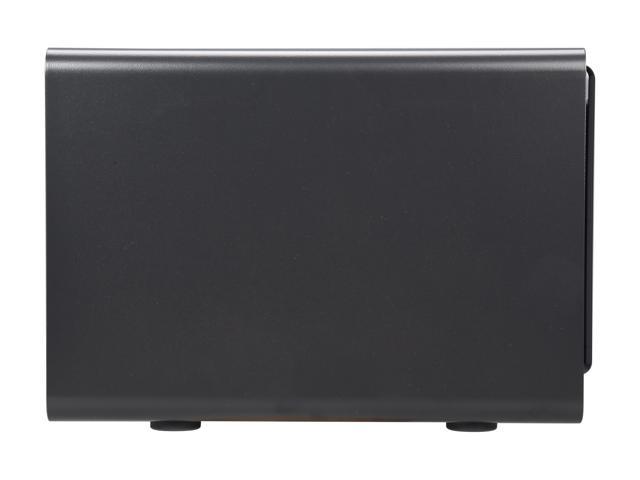 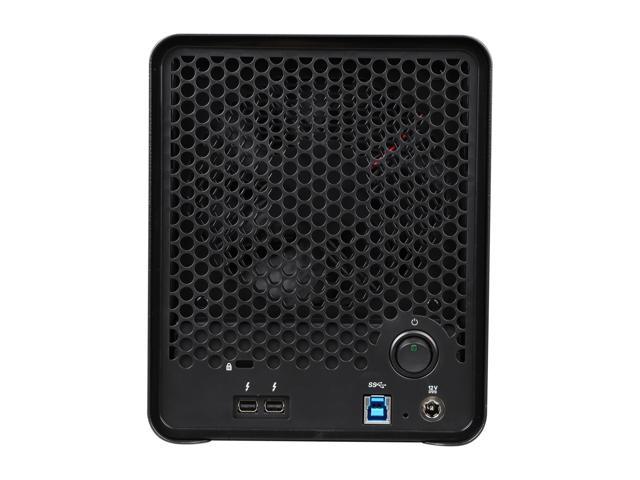 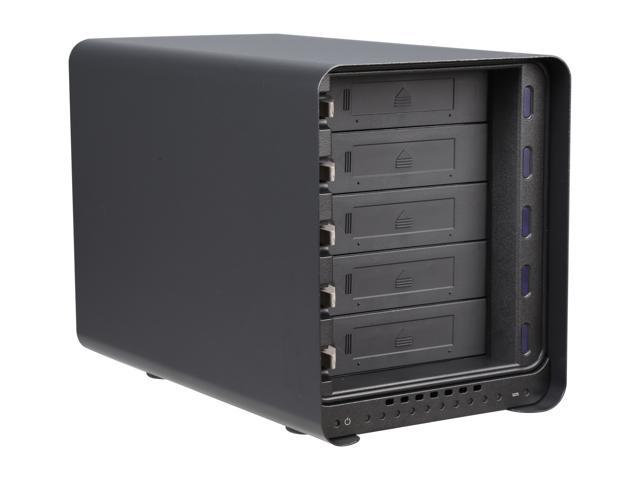 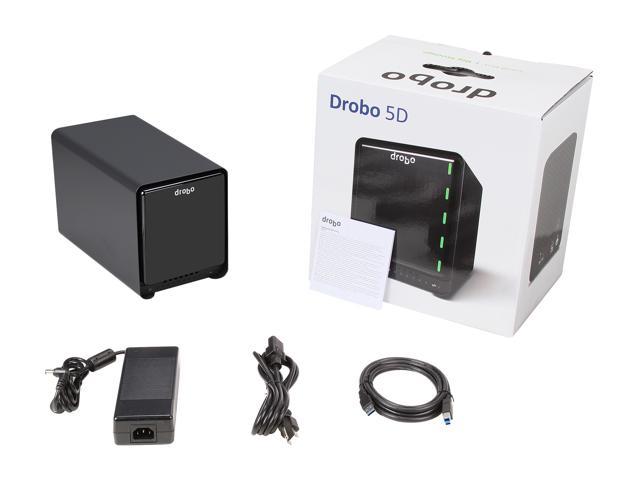 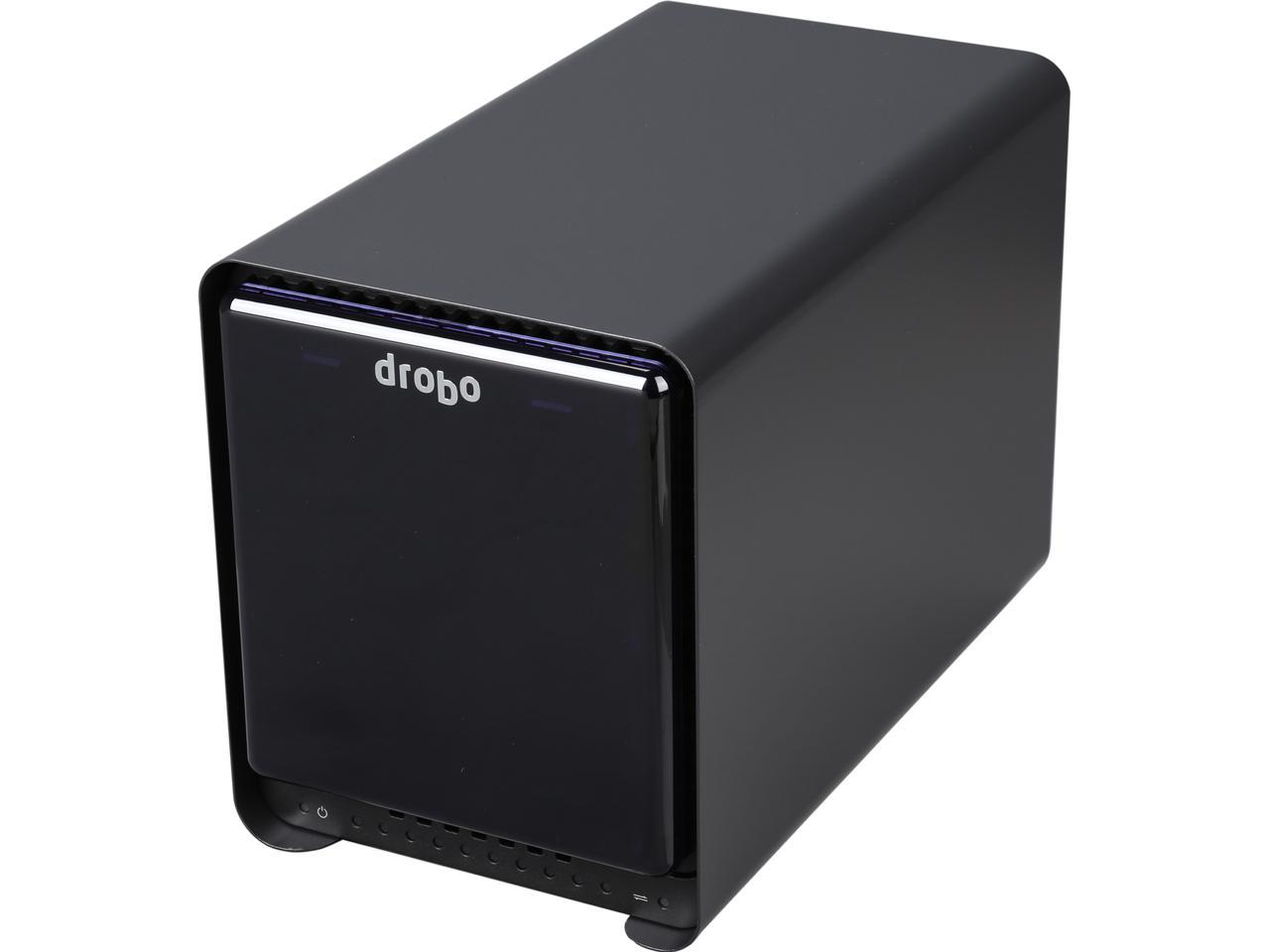 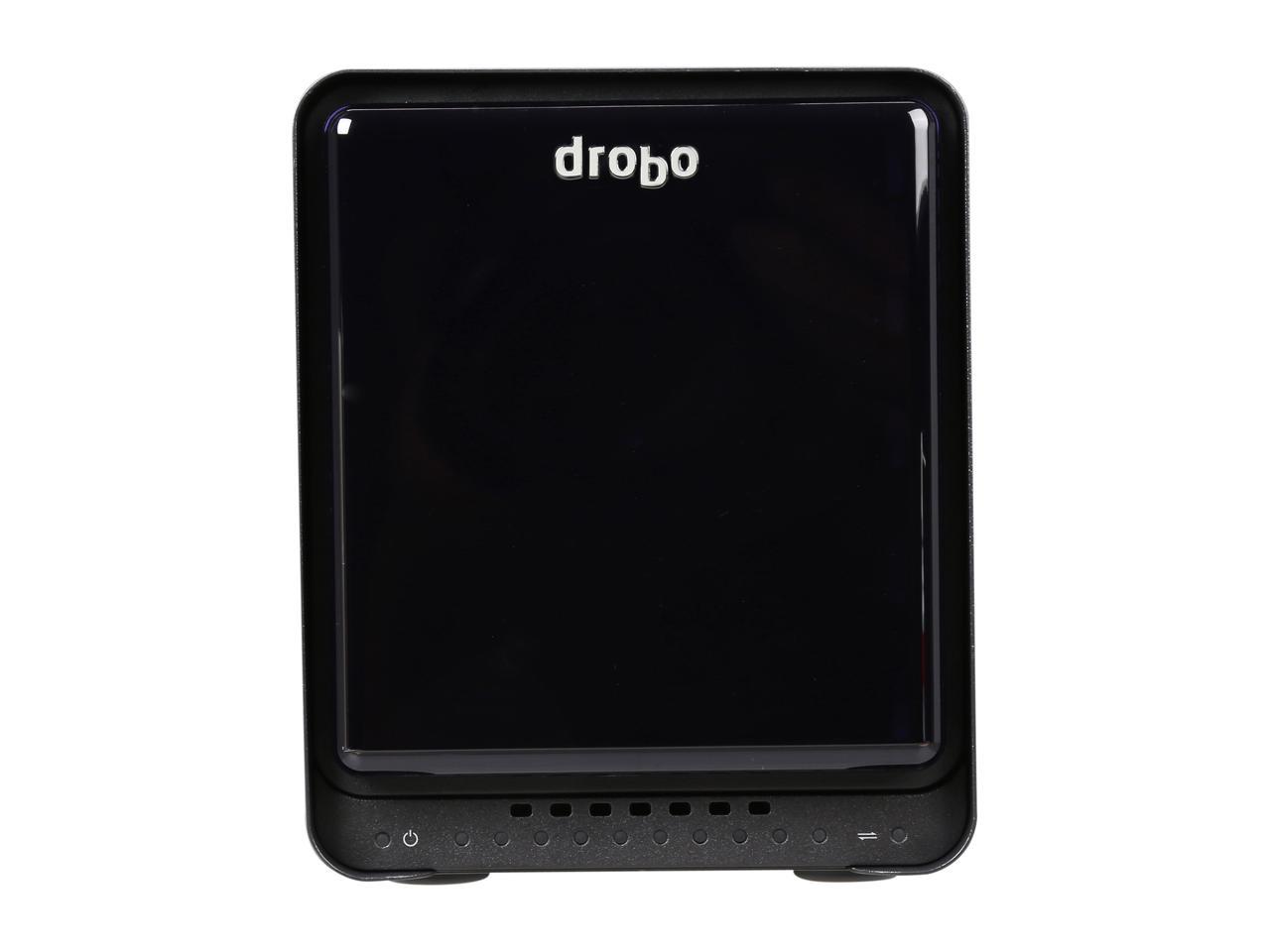 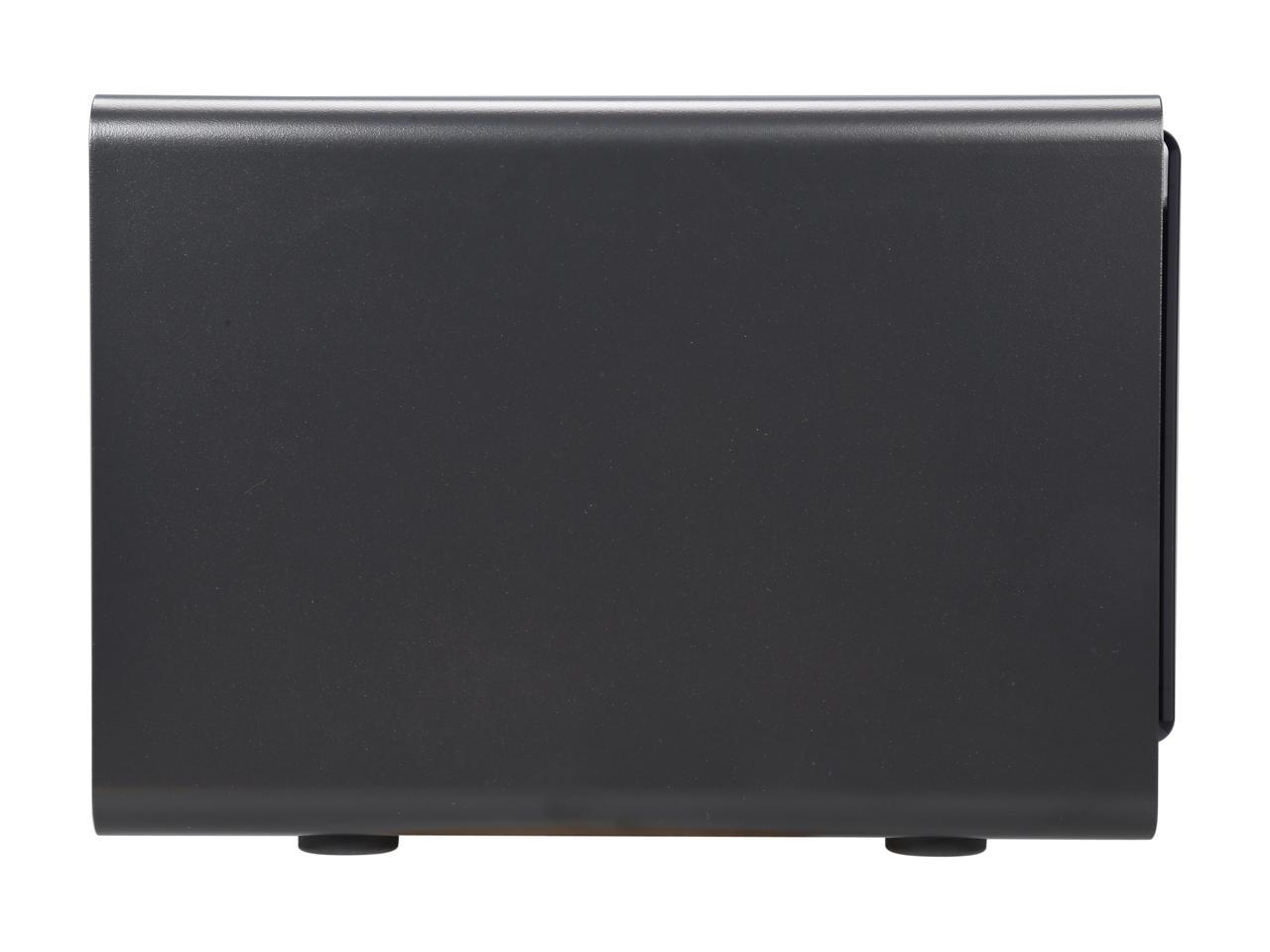 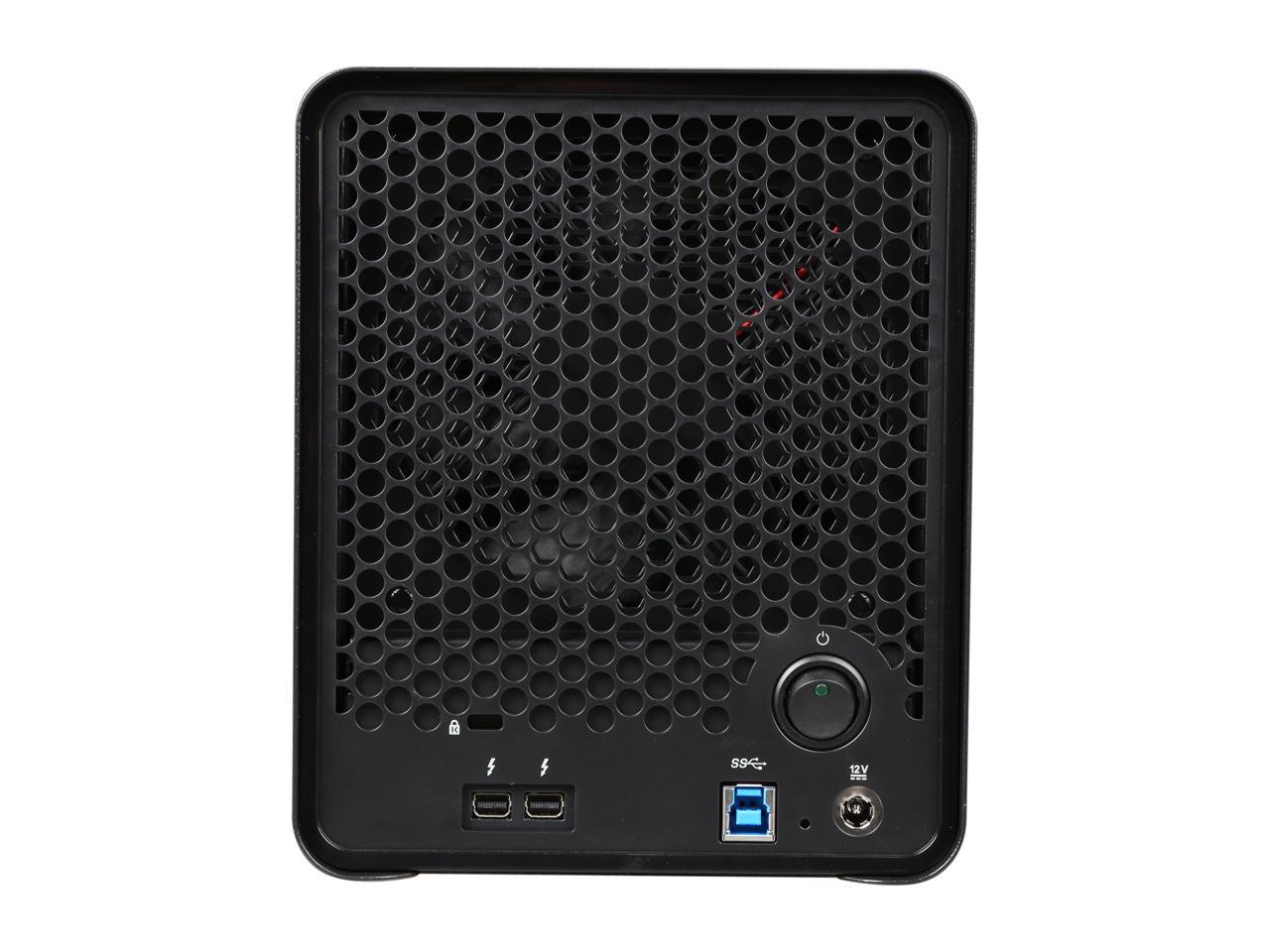 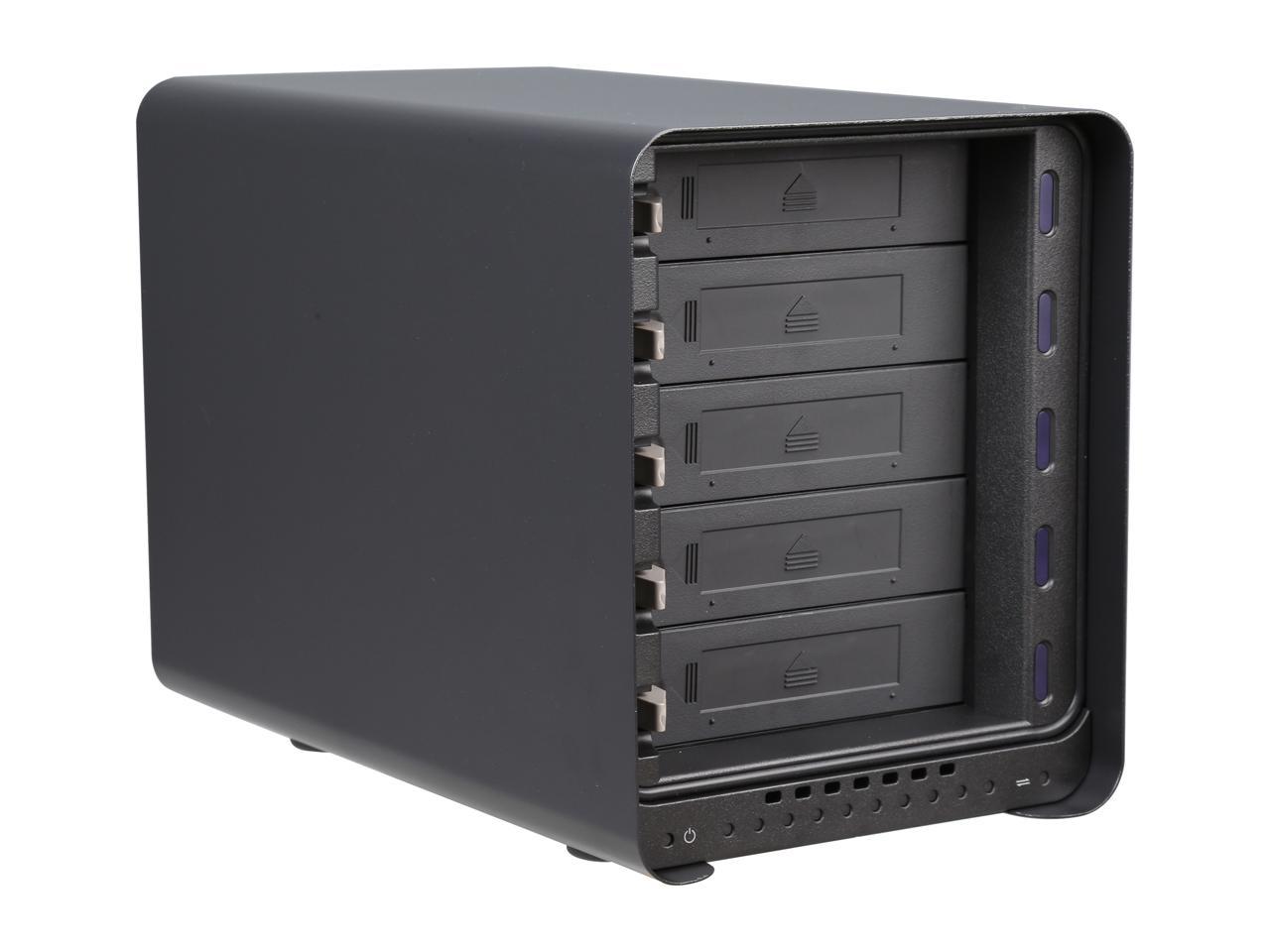 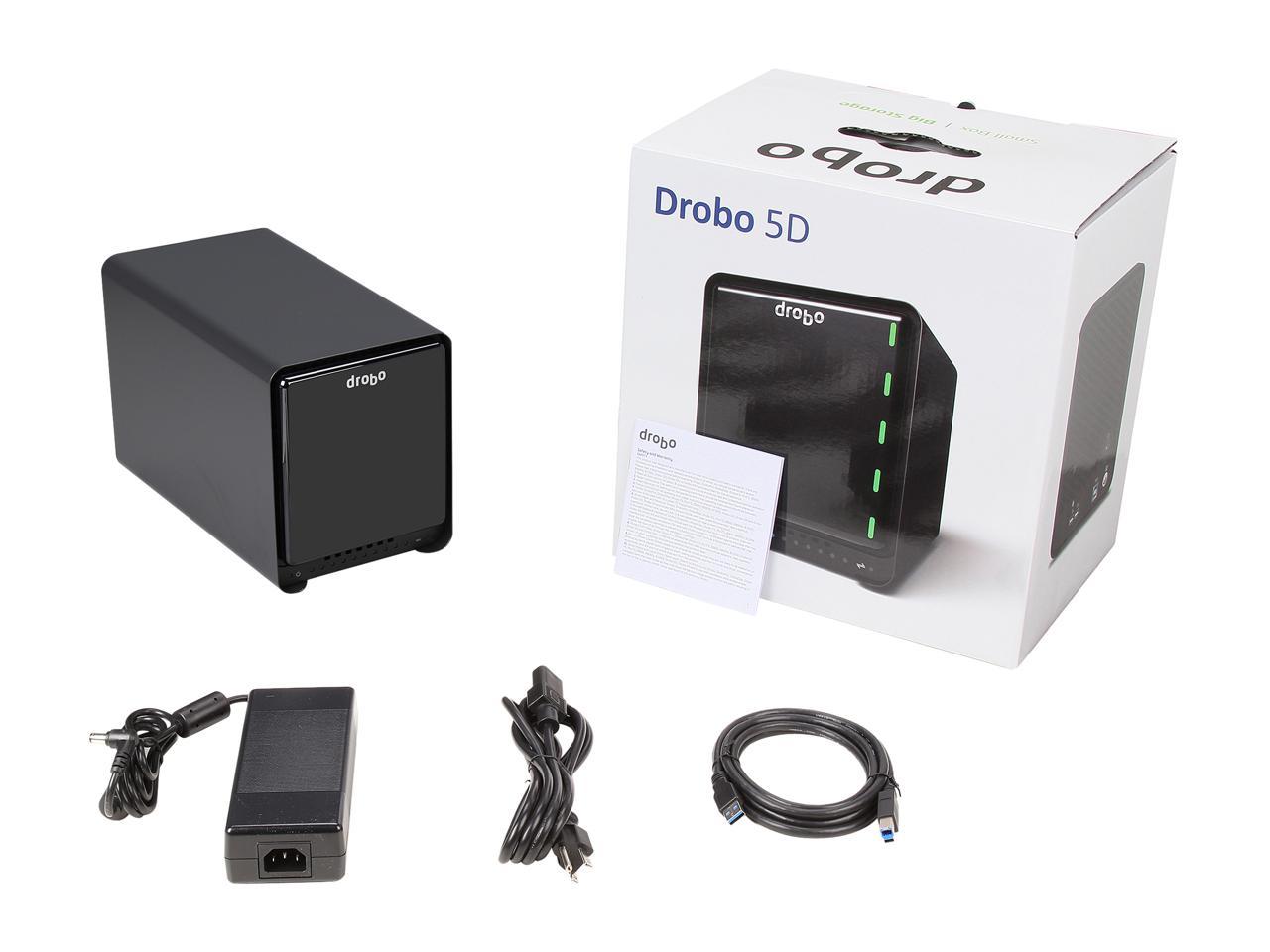 Learn more about the Drobo DRDR5A21

Pros: Really, really fast. I upgraded from a Drobo (FW800) to this unit. The same diskpack migrated from my old Drobo to the 5D. Shut down the old unit. Moved the disks. Booted the 5D and was online about 90 seconds later. I was getting reads of 30MB/sec over FW800. Now I get reads around 240MB/sec. I have the optional mSATA SSD installed. Attached via Thunderbolt to my i7 Mac Mini.

Overall Review: It seems Drobo really listened to feedback about the speed of the unit. While they were always brain-dead simple, they (at least the Drobo and Drobo S) were sloooow. Not anymore. I also like the tweaks to Dashboard. Before it was a necessary evil. It's starting to present more information now. If only we could convince Drobo to show drive Model/Serial info and stop encrypting logfiles...

Pros: Fast, even using USB 2. Much quieter than the FS or even the second generation Drobo Disk Pack.

Cons: Stupidly expensive against the new 5N. Even with Thunderbolt, which I don't have on my Mac Pro, why the $350 differential?

Overall Review: My iTunes library is now over 5 terabytes, and this is pretty much the only answer for reliability and safety without a computer degree that you need for most other NAS storage solutions. The Drobo folks are also good at support....

Pros: USB3 and Thunderbolt ports. I run a pc so I am using USB3. It’s not the fastest usb3 ever but still many times faster than USB2. Easy set up. Just install drobo dashboard set up the drobo to the maximum space possible (for future upgrades) and install the hard drives. And you are ready to go. Expandability. The fact that this device can be upgraded to 5 4TB drives.

Cons: Cost. This thing is expensive but all similar products that do what this does are around the same price. It basically has its own built in OS that handles building and arranging the array of hard drives. Array rebuild time: If you remove a drive or one fails it does take time for it to rebuild the array but you computer does not need to be on while it’s doing this. Also the more data you have the longer it takes to rebuild.

Overall Review: I bought the Drobo 5D to by my main storage center for all of my data. I had increasingly become concerned about one of my hard drives dyeing and losing all of my files. So I bought the drobo since it offers single and dual disk back up. I installed 4 2TB drives that I already owned and added one new 3TB WD red to the system. What’s nice about the drobo set up is I have the ability to replace any of the drives with larger ones without having to manually rebuild the array. The Drobo handles all the technical bits its self. I bought this from the recommendation of a friend who has the previous version. For what this product is it can’t be beat, but there are other devices out there that do the same thing for about the same price worth considering. I chose this because my friend owned one and he gave it his stamp of approval.

Overall Review: While the Drobo 5D may not be the fastest external Thunderbolt storage array for the Mac, it offers up a pain-free experience that allows novices and professionals the capability to add massive amounts of capacity to any space-constrained environment. While the unit may not be as cost-efficient as the plethora of NAS devices that are available, the construction of the unit and the simplicity of the underlying software and utilities are justified for the asking price. When combined with a mSSD that is installed in the underbody of the unit, the 5D becomes even more capable with file transfers that can leverage the SSD. The 5D generates far less noise/heat than a loaded tower PC, and you cannot hear the drives when they're installed and in-use, even from approximately two feet away. The adjustable illumination will cater to those who do not enjoy bright/flashing lights to be visible. While the cons I've mentioned aren't showstoppers, they are the very limited flaws in an otherwise well-designed package. Highly recommended for the mini and iMac!

Pros: I like its ability to setup the system as a 16TB array with out having the drive capacity first. It is backing up my TimeMachine Server alternating with an IOSafe. The tech support spoke english from America. Anyone who has called techsupport in India understands. I mean no disrespect, jus the barrier is difficult. The lights can be dimmed even.

Cons: If you are migrating from windows to mac and the system doesn't recognize your drives as formatable; hit the reset system switch.

Overall Review: So Far Nothing

Cons: Cost Storage management not as flexible as Drobo 5N (which has logical volumes/shares)

Pros: Blinking lights and glossy package make it look smart. The promise of easy expansion by adding drives of any size makes it sound like panacea.

Cons: Doesn't actually work, and Drobo Support will alternately ignore and respond to your tickets until you're out of the support period. They will not accept a return unless you purchased the unit directly from their online store (and then only within 30 days -- so you're out of luck if Support takes longer than that to work out your issue).

Overall Review: After extensive research on external drive arrays to replace our small office's file server (running a 2TB mirrored array), I selected the Drobo 5D because of its (purported) ease of use and its dynamic RAID setup, allowing us to put any number/size drives in the enclosure. RAID without the complexity was what I was looking forward to. I connected our Drobo 5D to our simple network "server" (a Dell Vostro running Windows 7 32-bit) and added 2x Western Digital 3.0TB drives to it. Within a few hours of completing the initial data load onto the Drobo, it began sending email alerts about how it was reaching critical capacity (despite only being half full). Checking the Drobo Dashboard software included with the unit, it would indicate that the drive array was completely full, and then would begin ticking downward (by about 100MB/sec) the amount of consumed space until it settled out at the actual capacity. About 6 hours later, the system would do it again. I really wanted the Drobo to work; I formatted the array twice, reloaded it with its 1.2TB of data twice (a multi-day affair via its USB interface), reset the Drobo back to Factory default several times, and finally reformatted our Dell, replacing its operating system with a clean install of Windows 7 64-bit (once again performing the Drobo reset, drive format and data load) -- all to no avail. I uploaded 6 copies of diagnostic files to Drobo Support, various movies and screenshots of the misbehavior, along with Windows Event logs and copies of the email alerts. I even purchased and added an additional 3TB Western Digital Drive at Support's suggestion. I worked with Drobo technical support for almost 90 days (opened the ticket on December 30, 2014 and requested a refund on March 16, 2015), all the while running lower on drive space on our network share. This included a nearly 3-week stretch (1/22/15 to 2/10/15) of no response from Support on my ticket, despite 5 requests for updates via their support portal plus a phone call. My request for a refund was refused on March 20, 2015 (despite a tech, via phone, assuring me that I was not missing a window for returns), because Drobo will only refund units purchased directly from their own online store, and only within 30 days. Further, exchanges for like models are refurbished units with no possibility of return. Despite demonstrating a clear desire to make the unit work in my environment, Drobo has ultimately left me flat with a non-working 5D, and I'm out $600. Shame on you Drobo! I expected better. I wholeheartedly warn away other buyers. My replacement purchase was a Synology DS415+ instead, which offers the same type of hybrid-RAID technology (add mixed drive sizes), along with additional software functionality the Drobo lacked (private cloud, remote access, the ability to backup to our Crashplan Pro account, etc.). It seems to be better regarded by purchasers as well, with more stars and better reviews than the Drobo unit.

Pros: The speed of thunderbolt is incredible. Loaded with Crucial mSata and using for offloading user folders,VMs, and media. Quality product for an office location away from the user.

Cons: the noise of the case fan is quite unbearable. If your goal is to place this in a bedroom you sleep in, seek another product. The fan noise contains a metallic grinding noise that will slowly drive you insane. 2 stars removed for the lack of engineering in noise control. The Drobo 5D must run the fan in continuous mode to cool the processor. The 5N is supposedly quieter. I however, was not expecting the fan to be as noisy as it was.

Overall Review: I opened up the device to inspect the fan. It appears this fan is swappable. I am definitely going to look for another, lower decibel fan to replace this with. Loaded this device with 4 Seagate 4TB NAS HD's. The drives are whisper quiet and spin down when not in use. The mobo for this product rests on the bottom just above the mSata bay. There are 4 screws located at the base that hold the shell to the inner case. If you remove these, and 6 screws inside, carefully, you can gain access to the fan.

6 out of 9 people found this review helpful. Did you?