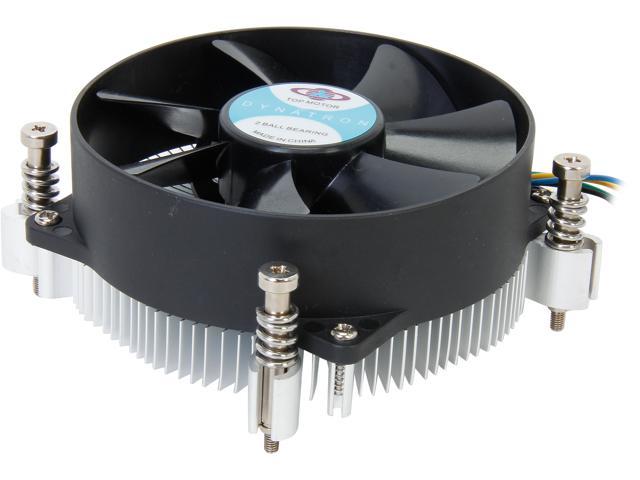 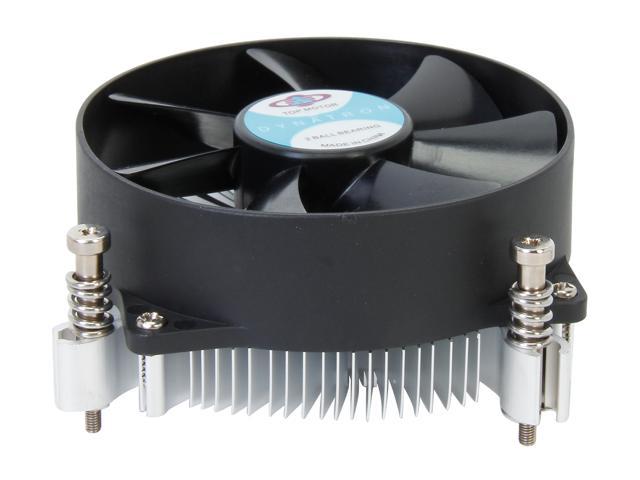 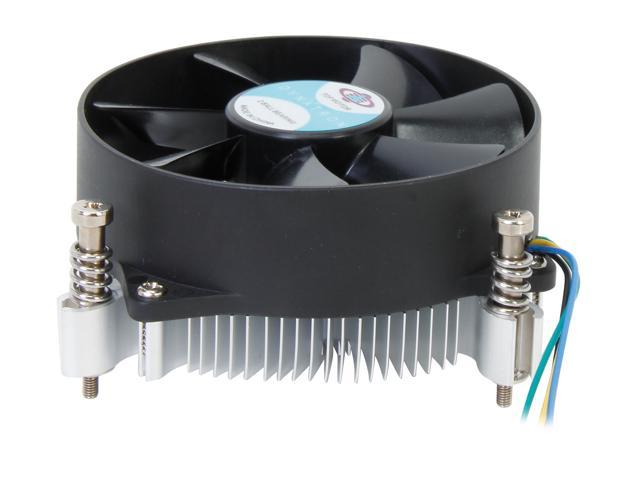 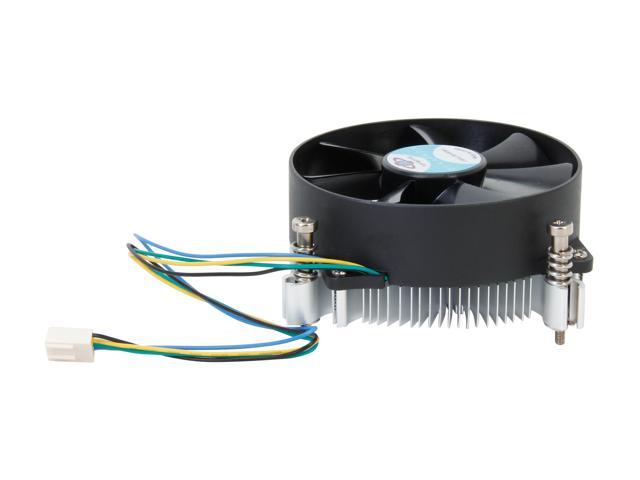 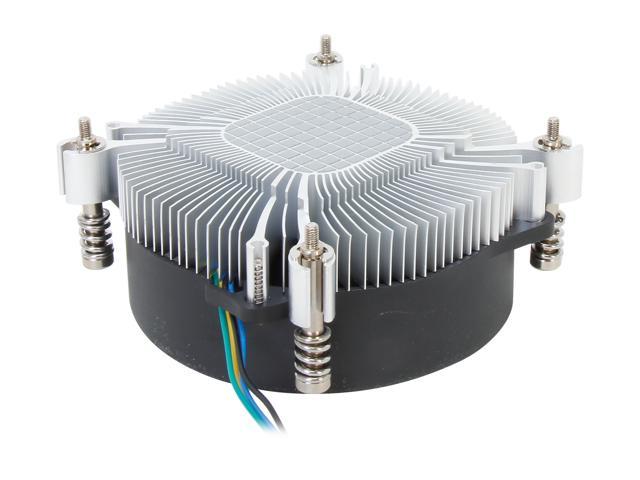 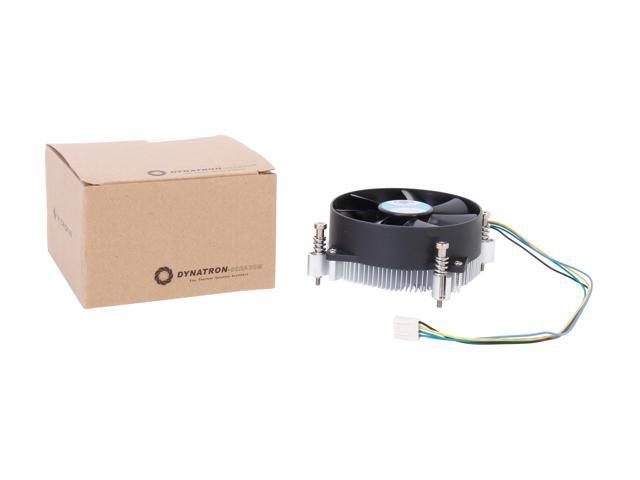 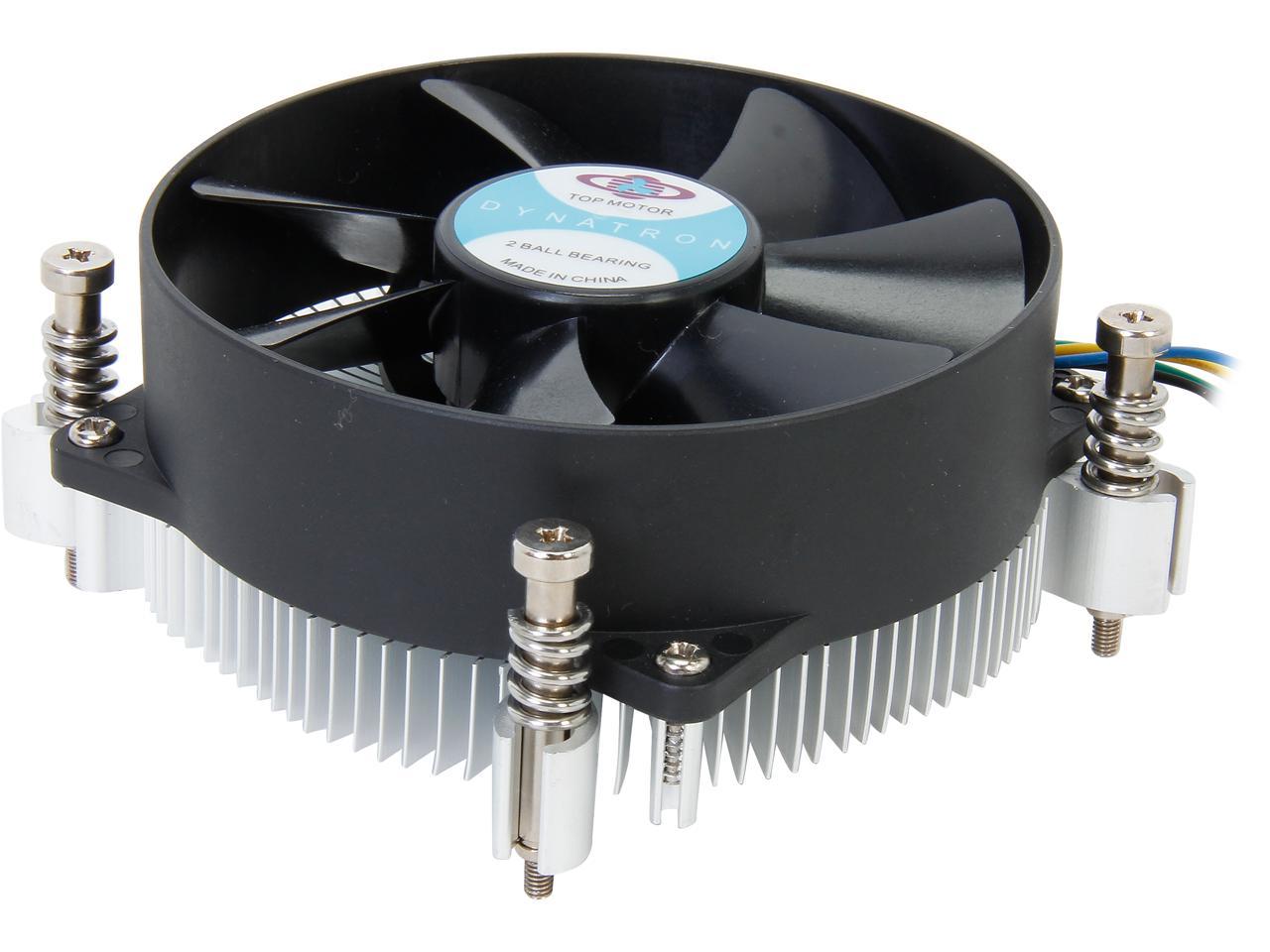 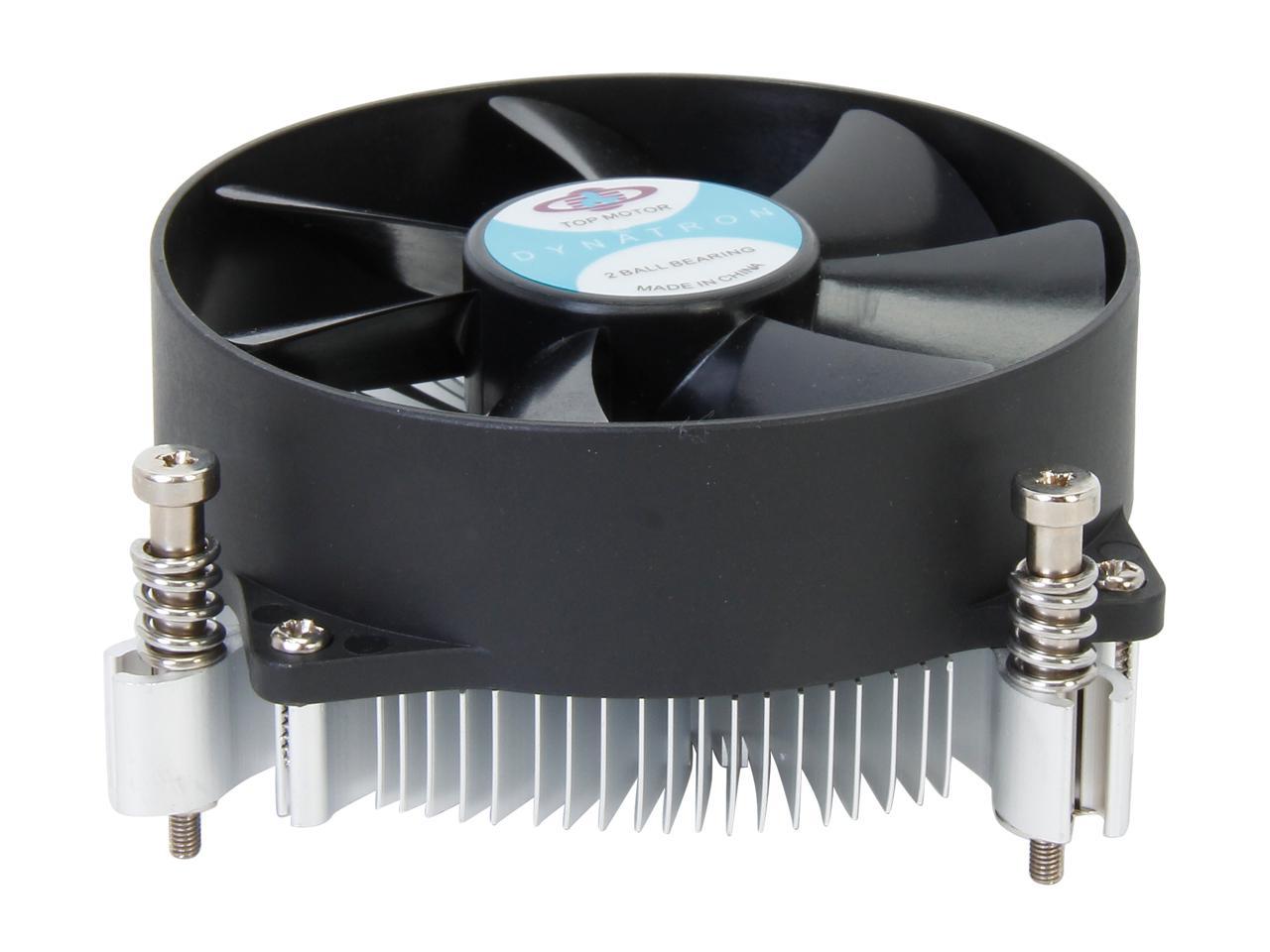 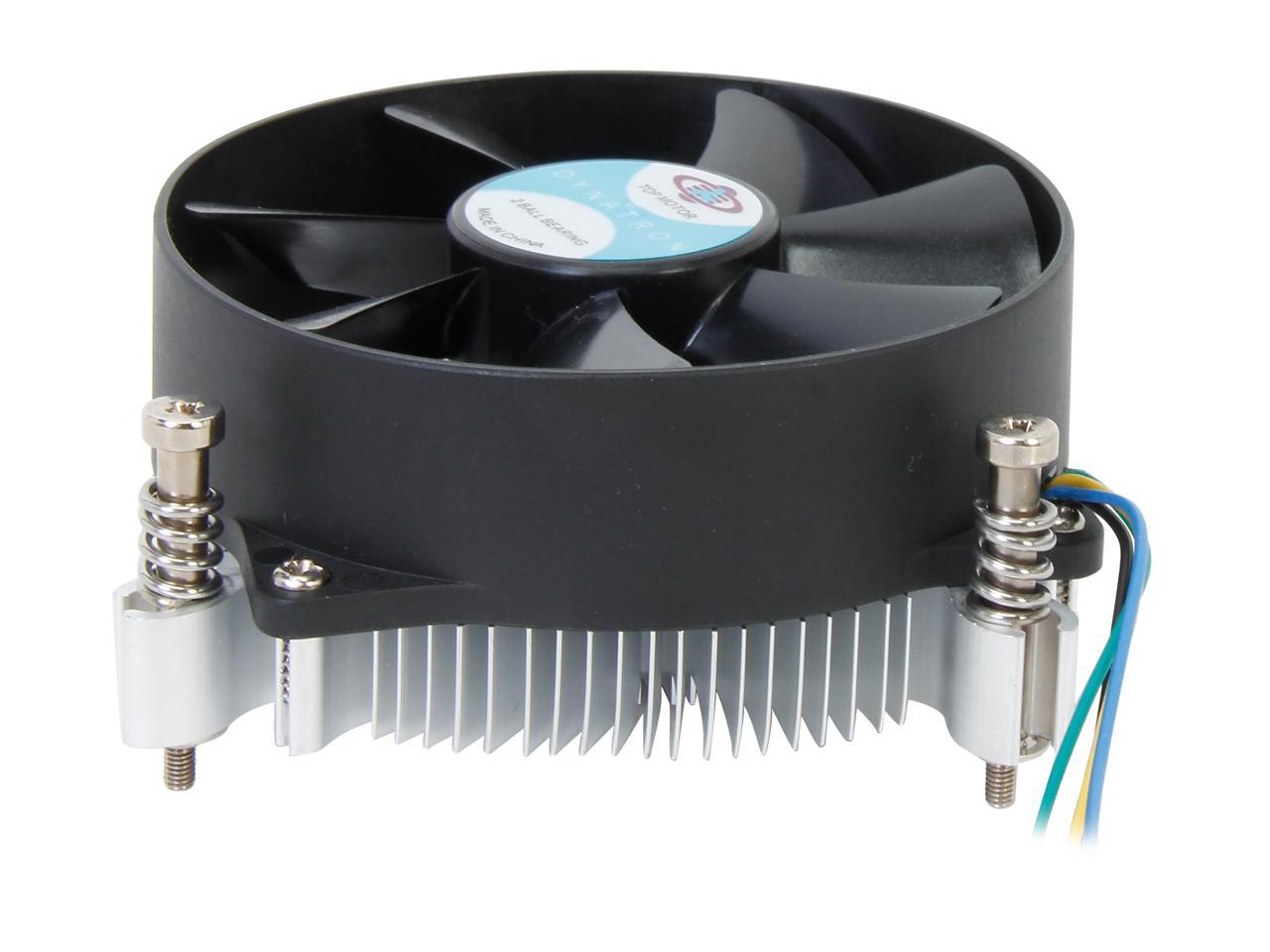 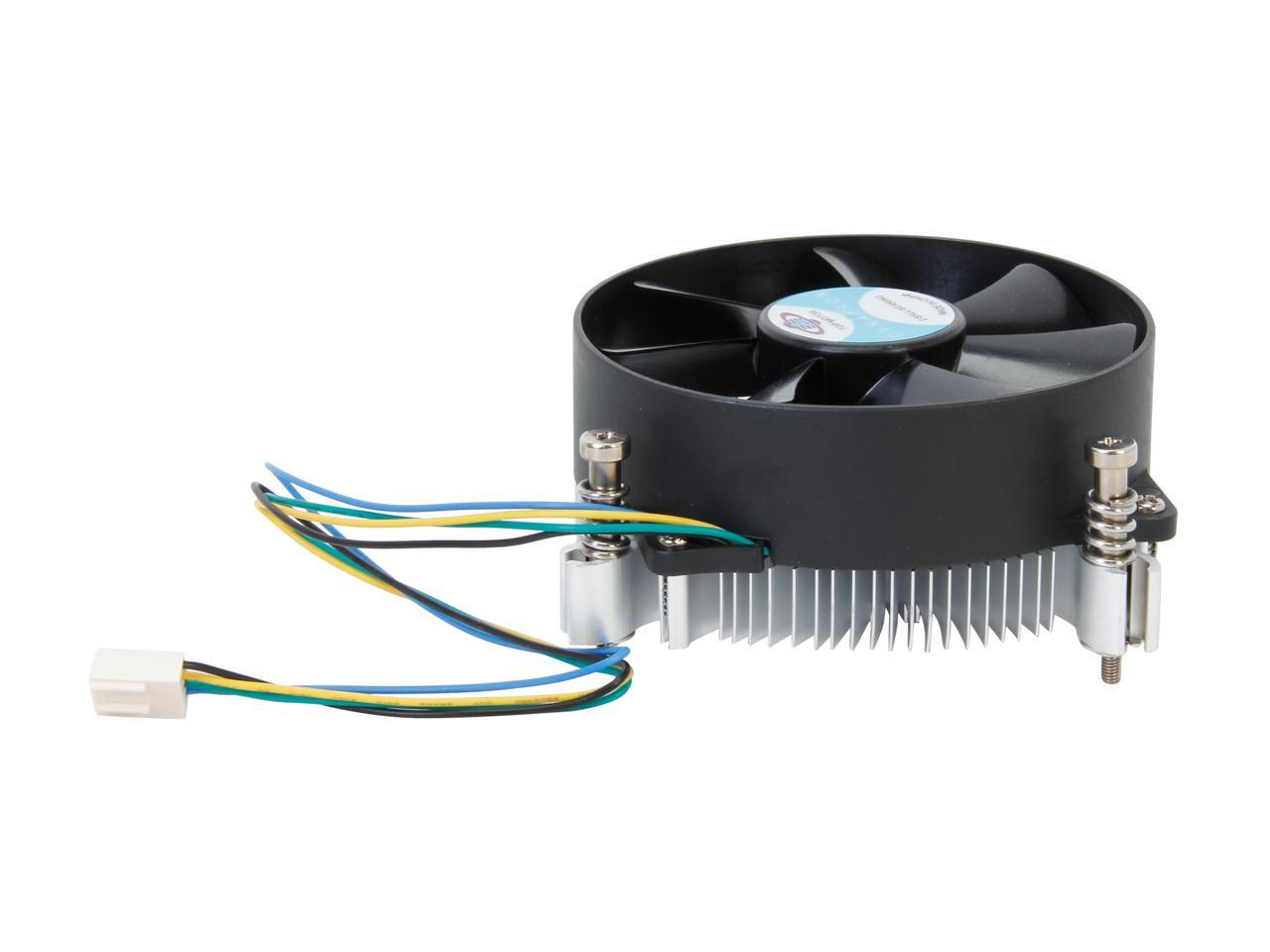 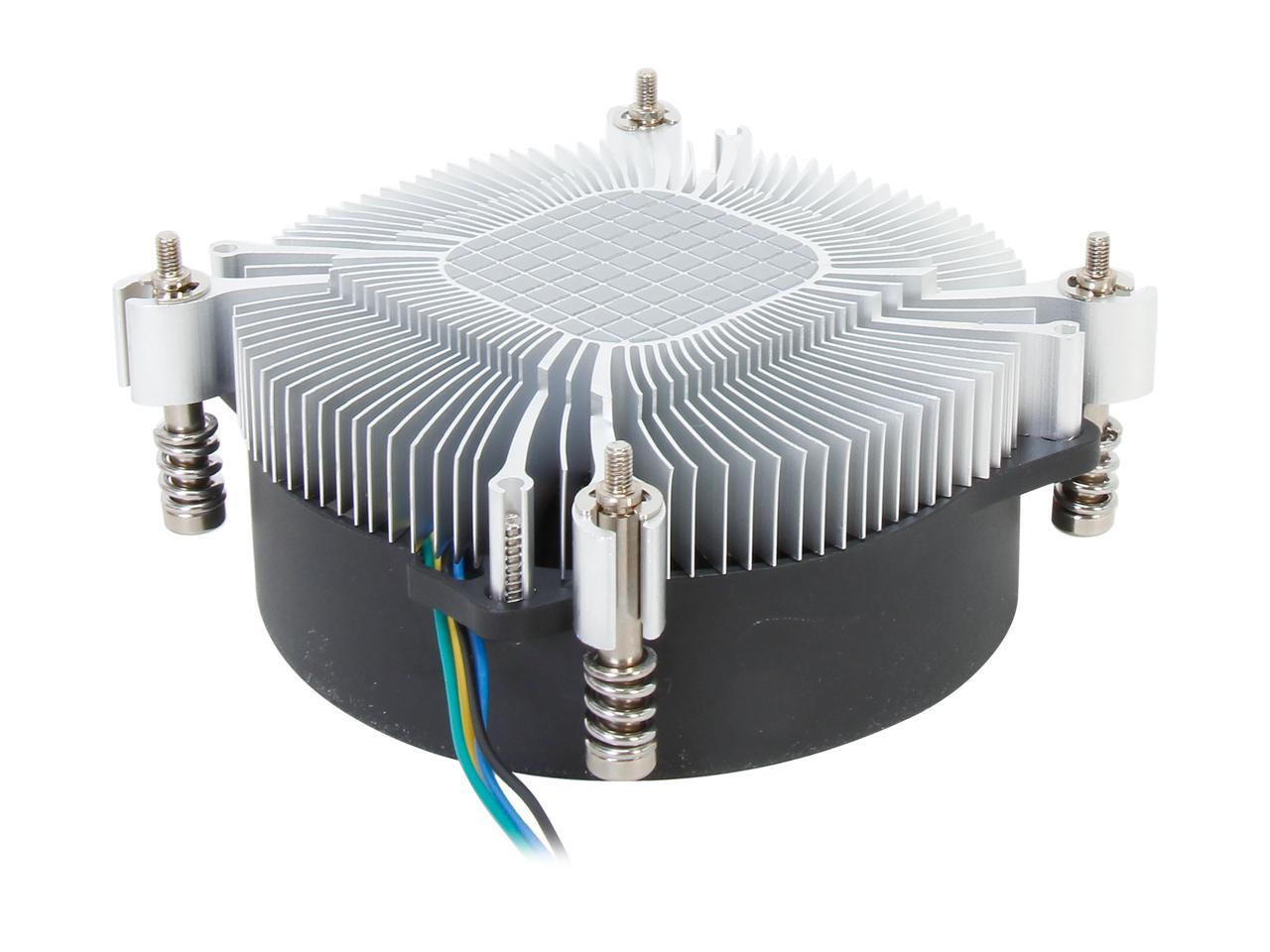 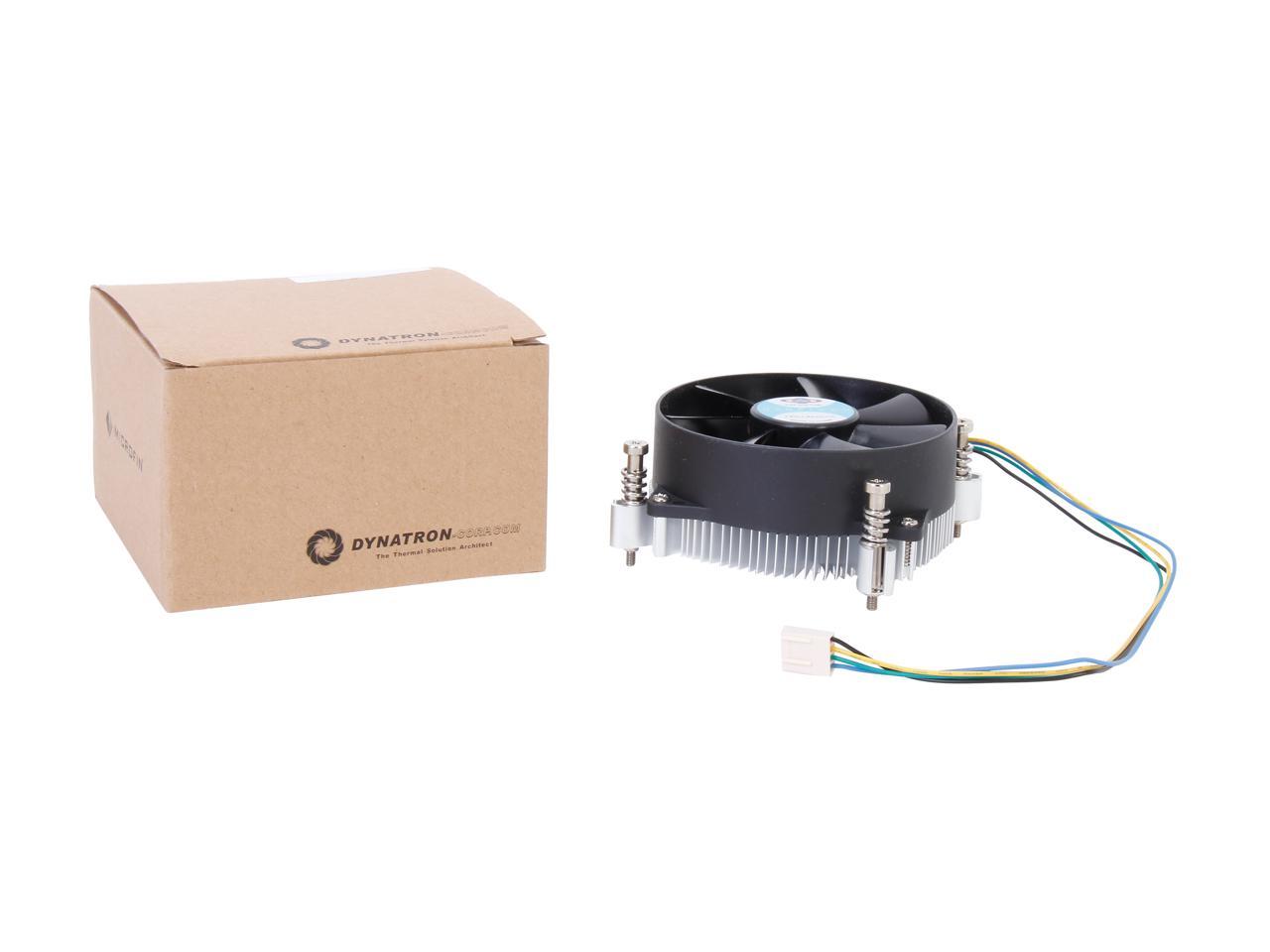 Learn more about the Dynatron K5

Pros: This fan is incredibly secure once it is properly mounted. I like fans that are incredibly secure on the CPU and motherboard. This fan is one of the few I could find on "the egg" that was for Intel CPUs (Ivy Bridge 1155 in my case), used screws not pins, had a 4-pin fan connector, and the fan speed actually was and is variable. The retainers on the back of the motherboard can be fitted in different ways depending on clearance issues. I found the clearance on the retainers to be very close to the motherboard, about 2-3 millimeters. They seem to require about the same "depth" as the CPU backing plate on the back of the motherboard.

Cons: None of my "cons" would prevent me from buying this fan again if I needed one. Think of my "cons" more as "gotchas" or "observations". You must remove the motherboard from the case to install this fan because you need access to both top and bottom. Fitting the fan and retainers to the motherboard can be tricky. I found it necessary to place the motherboard on a flat surface so the screw-mounts would slightly protrude through the holes in the motherboard. Some would call this "fiddly". The holes on my motherboard were almost exactly spaced for the retainers; 1 hole required "gentle persuasion". Get each screw "started" on it's retainer mount before tightening them down. You can still "wiggle the fan" a little bit at this point to ensure good contact between the thermal paste on the fan and the CPU lid. Next, I suggest a turn or two on each screw and keep working around all 4 screws (1->2->3->4->1->2, etc.) until all 4 are "snug". This way force is applied evenly during the mounting process. When turning the screws, turn them slowly and "by hand" until they feel like they have "bottomed out". At that point the screws cannot be turned any tighter without breaking something, but the screws are now "snug" and the fan will be securely mounted.

Overall Review: Please note: This fan is designed for mounting on Intel CPUs. It cannot work on an AMD CPU since there are no mounting devices for AMD. Make sure the retainers do not come into contact with any components on the back of the motherboard. That includes making sure any electrical leads that are soldered through the board and protruding on the back are not touched by the retainers. I found my board could take this fan as slow as about 700 RPM, but YMMV. If your motherboard runs a 4-pin CPU fan at full speed all the time even when there is no CPU load and no overclocking, suspect an issue with the motherboard or BIOS setup. I am using this fan on an AsRock "H61 MV-ITX" ("mini ITX") board and it exhibits poor CPU fan control under current Linux with LM Sensors. This issue is documented elsewhere on the Web for various AsRock boards. My prior CPU experiences have been AMD and they use a very stiff spring clip to secure the fan to the CPU. The Intel method of "push pins" seems very poor in comparison and I have had a number of Intel "push pin" fan mounts come loose. Above all. Be very patient. Pay very close attention to the details of mounting this fan. Take your time. Do not rush when mounting this fan. The payoff is a securely mounted variable speed fan (depending on your motherboard) that should last many years. If you do a "rush job" when mounting this fan and accidentally create a short circuit with the mounting, you could damage your CPU, your motherboard, your power supply, your case, or worse.

Cons: -Thermal compound is laid out in a grid format, which causes some surface contact to be inconsistent. ** This isn't a game changer, there was still enough compound to fill the grid imprint -The adhesive for the fan mounts are not that sticky, which causes a lot of fumbling with the motherboard trying to mount the fan while holding the mounts in place.

Overall Review: I would buy this unit again if I needed to.

Cons: cooling product on heat sink is cheap but it make the job!

Pros: Price, compatibility, and a very simple secure mounting solution. Removable fan for cleaning/maintenance, and if need be replacement, without removing the entire heat-sink.

Overall Review: Mine arrived with one small problem from the factory. It was missing one of the spacers/insulators on one of the back-plate posts that I was able to fix easily.

Cons: Tough to attach to M/B, Chip. Came with thermal paste installed on it. (Buy your own!)

Overall Review: Used it for a Core i7-6700k Skylake. (6th Gen.) Already had thermal paste on it. Once I attached it, CPU started overheating. Destroyed my SATA HDD's. Couldn't game because the black screen of death occurred everytime I clicked on the program. Once I figured it out, I removed the thermal paste that came with it and applied paste I bought separately. Now everything is fine...for now. I'll admit, I'm still new to cpu building, but word of advice, buy your own thermal paste! and get HW monitor. Helps a lot.

Cons: For cosmetics, the power wires should be in a loom. Very faint ticking noise from fan during low speed operation.

Overall Review: Recommended for a low profile ITX build. I'd buy it again.

Pros: It's inexpensive, quiet, small, and easy to install if you know what you're doing. My CPU stays nice and cool.

Cons: The thermal paste was dried up and I feared it wouldn't make good contact with my CPU so I scraped it off and applied some fresh paste. No documentation was included. It took me a while to figure out how to remove the protective paper covering the adhesive to attach the brackets to my motherboard.

Overall Review: I may buy another for a friend's build.