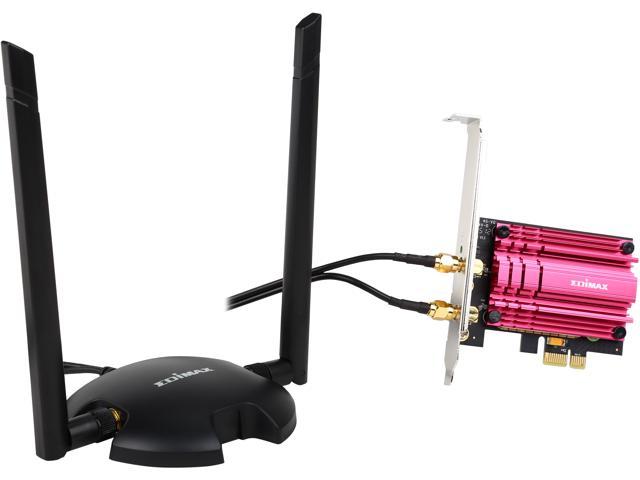 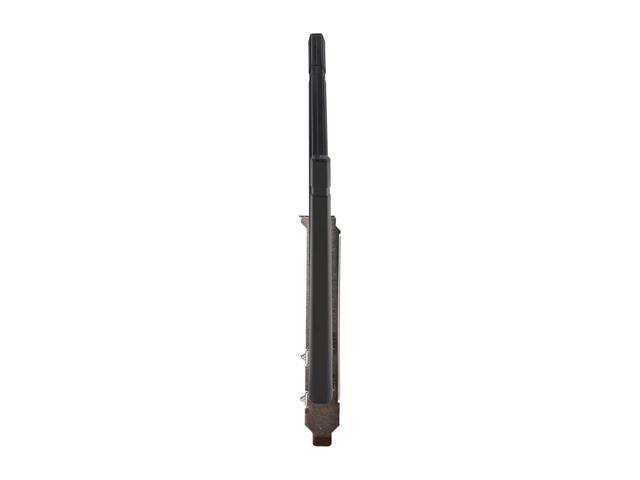 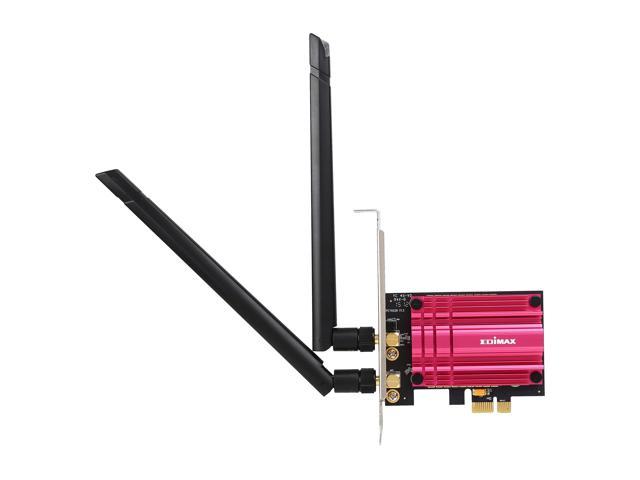 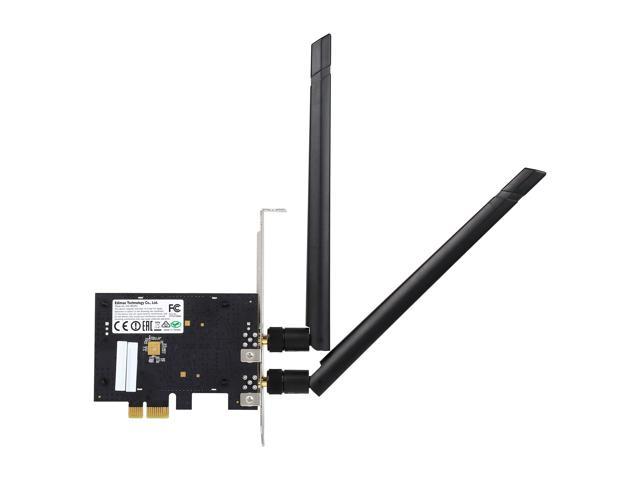 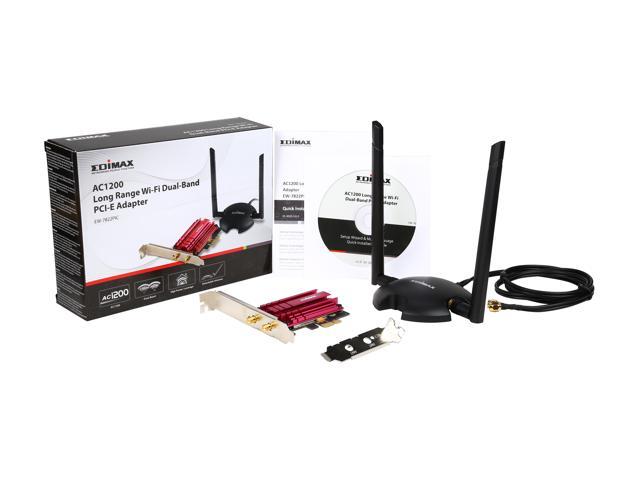 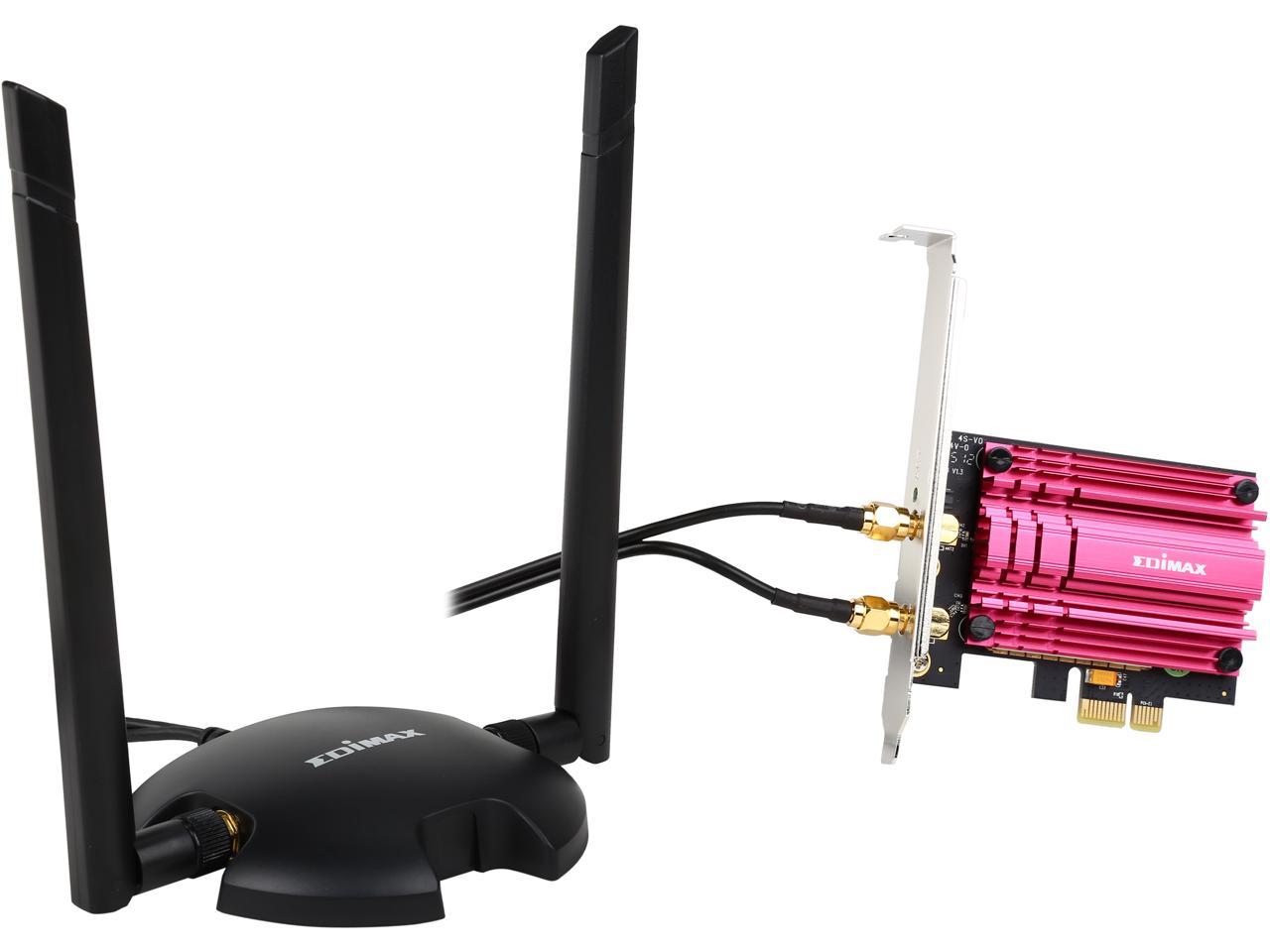 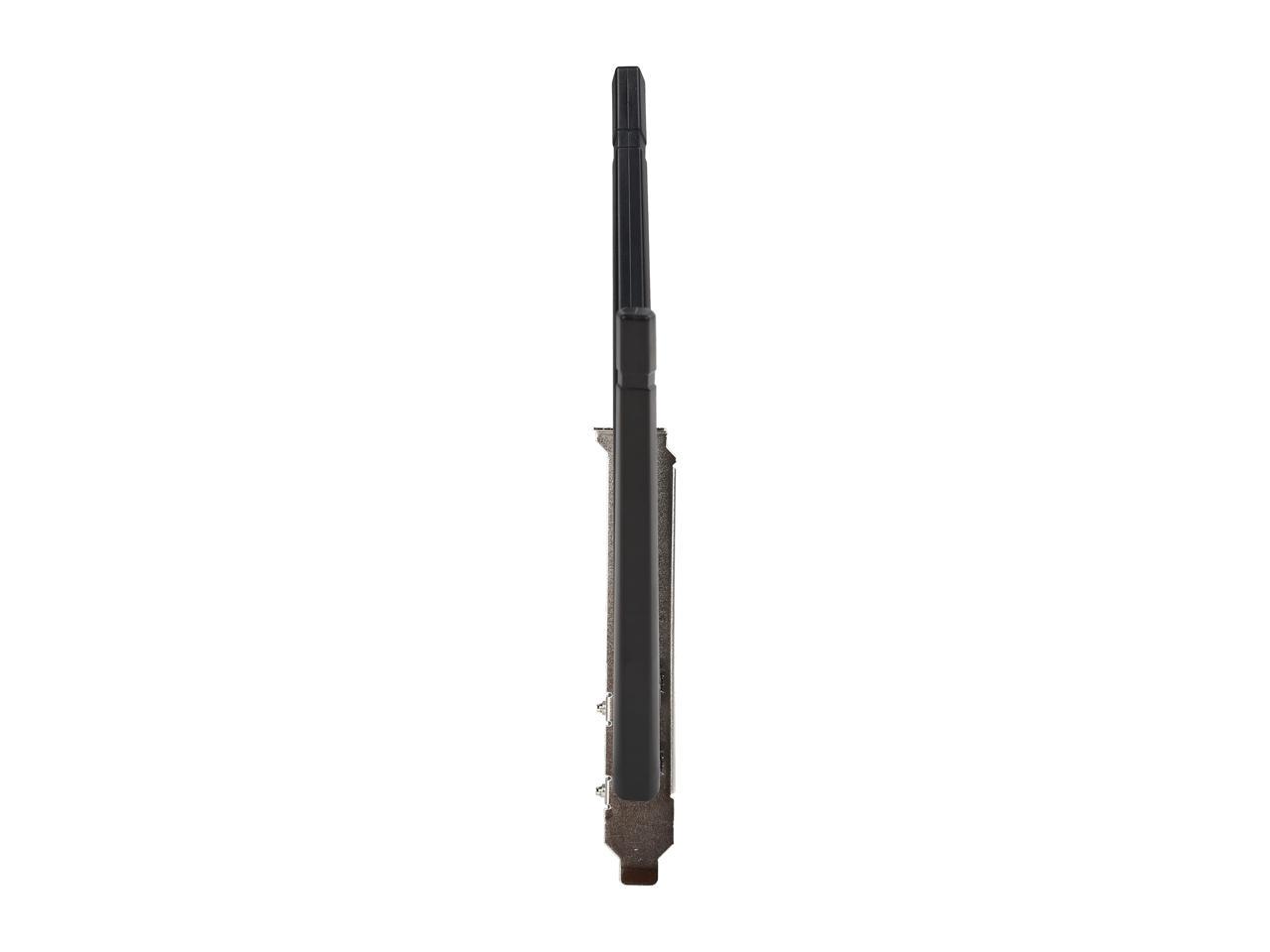 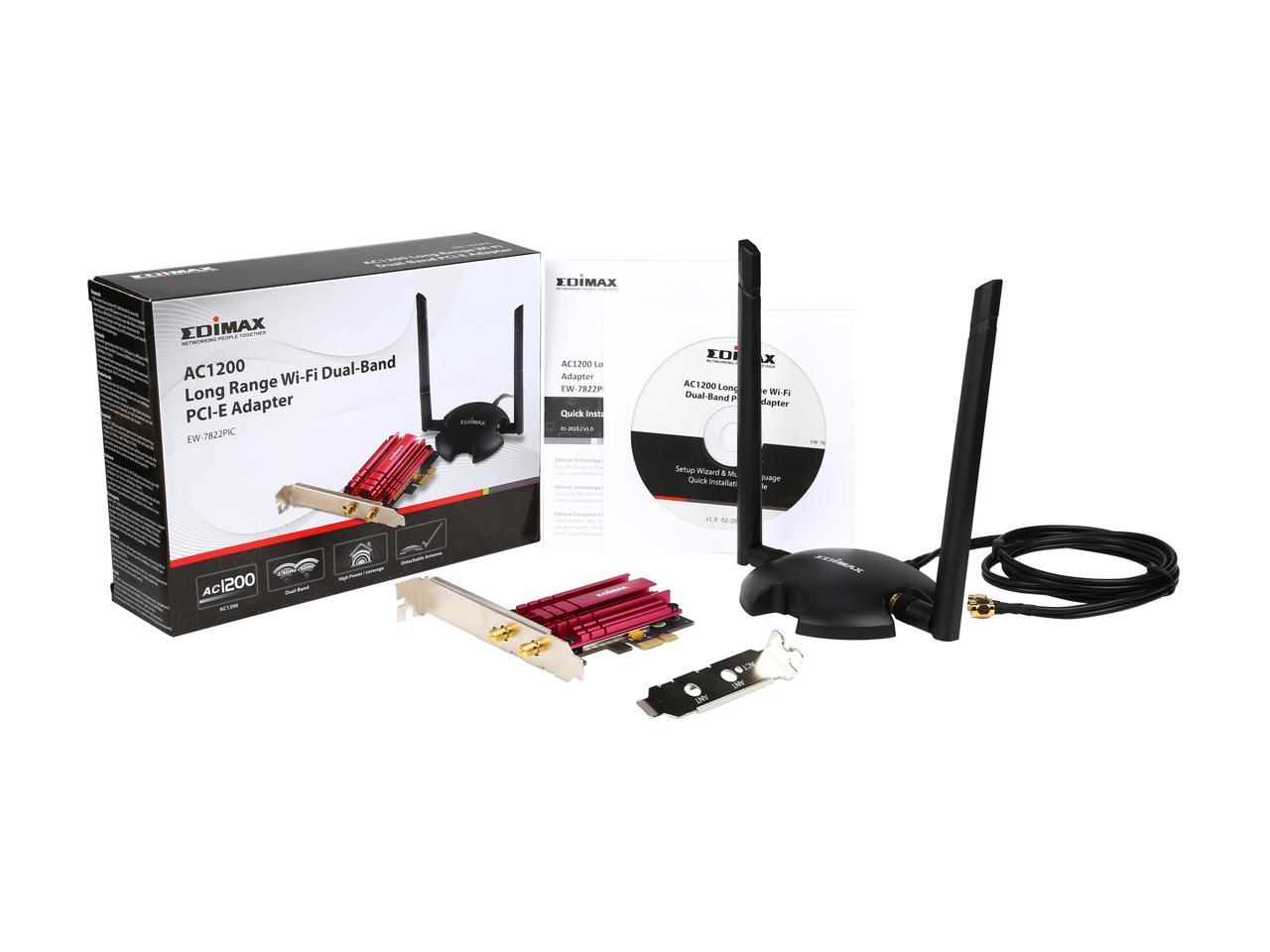 Learn more about the EDIMAX EW-7822PIC

Pros: Have been using this product for 7 months without issue. As I sit here writing this review I am connected at 867 Mbps @ 5Ghz. Decided to go totally wireless on all of the devices in my home, the Edimax has not let me down on my primary home computer. I should add that I am using a TP-LINK Archer C7 Wireless AC1750 to support the connection. Overall, I have no complaints. The setup was plug and play.

Cons: The only con I can really think of is the short cable. Knew going in it was a little shorter then I liked but also knew I could live with it. Another foot would have helped a lot though.

Overall Review: I would recommend this product to friends. Wish I had gotten it for current price!!

Pros: 837 Mbps consistently - I know this is just the adapter to computer-router link, but my older N-band adapter would never get above ~200 Mbps and another AC band adapter never above about 500. Signal strength on 5 Ghz is consistently strong - above other adapters always had difficulty getting a good connection on 5 Ghz such that I had to use 2.4 Ghz for reliable connection. My AC-band router is about 30 feet from my computer with 2 intervening interior drywall walls, so for 5 Ghz not bad Works great on my Linux (Ubuntu 14.04.3 LTS) machine (but see installation cons). I run an NFS and Samba file server that I connect to via wifi and I can see the improved file transfer rates

Cons: I downloaded and compiled the Linux 3.16 kernel driver(module) from the Edimax support website, but to get it to compile I had to go into the source code and remove two lines that were throwing an error (lines 1355, 1356 in source code, can't remember what the specifics were at the moment), but then it compiled fine (I'm running 3.18 kernel so that may have had something to do with it). Had to hand install the new .ko (rtl8812ac) in the proper directory and update path, but udev then created the proper rule for the module to load automatically at boot. I also had to blacklist a module for a former adapter I had tried, rtl8821ac, as it was also loading. Since then everything has been working fine. Knocked an egg off for all the above, but adapter is performing flawlessly so only one egg off seems appropriate.

Overall Review: This is the second Edimax dual-band wifi adapter that I have had driver trouble with (the first one was on a Windows machine). However, I do applaud Edimax for putting up Linux drivers for many of their products. I would definitely recommend this adapter to others, even those using Linux, because of it's great performance.

Pros: Once I got it working, i could lock it into the 5GHz band with no problems. Has not dropped a connection yet. No latency problems at all.

Cons: PITA for me to set up--but might just be me and/or my mobo

Overall Review: I can't comment on speed, because this is an odd environment with lots of steel beams and 4 different routers. Had a large setup problem because neither windows or even the bios saw the card as even existing. Eventually discovered a setting in bios to force the PCI port it was in to (PCI spec) 1 (instead of auto-detect) and *poof* everything worked. Minus one egg for the hassles, but the product seems to work fine, if you can get it working. My mobo is an ASRock x99x, with UEFI bios. Other mobo's might not have this issue at all. No idea.

Pros: i get 396mpbs on 5ghz connection, more than double my previous speed. works perfectly. 3 months later: the magnetic stand broke (one the parts one of the antennae screws onto became loose and won't tighten, and now there's no connection on that side). also one of the antennae no longer functions since i had great difficulty unscrewing from the magnetic stand the part kept spinning and couldn't get the antennae loose enough and i damaged it in the process). i did replace the broken antennae with a spare one capable of 5ghz but i only get 260kbps - 296kbps now. the signal is no longer getting an extra boost from the magnetic stand and is much weaker.

Overall Review: make sure you have a compatible router, one that has 5ghz connection. not available anymore, probably for the best. the wifi card is fine, but maybe not as powerful as advertised

Overall Review: Unfortunately, I did not get to try this at all. The first time I was shipped a defective product that has never been able to be detected by my Z300 motherboard and my brother's computer, which we also tested on. The second one they gave me also failed to work on my computer, but strangely worked on my brother's older one just fine. If I didn't know better I'd think it was mocking me. After everything, even with me returning this, it's just a $30 waste of money in shipping costs and restocking fees. This thing is, more trouble than it's worth. Buyer beware, check that this card is compatible with your motherboard in the first place.

Did you find this review helpful?
Manufacturer Response:
Hi John, We are sorry for the difficulty you are experiencing. We appreciate your feedback and would like to help you solve the problem. We need more information from you to provide possible solutions to solve your problem. Please contact our tech support at 1(800)652-6776 during our normal business hours between M-F 9:00AM – 5:00PM PST or write an email to "support@edimax.us". Our tech support team will assist you with the issue. Best Regards, Edimax Customer Support
Kelly E.
Ownership: 1 week to 1 month
Verified Owner
Works well out of the box.3/21/2017 8:42:28 PM

Pros: My router is at opposite end of house and on another floor and signal is solid. Wanted PCI-e with extension antenna for Windows 7 because of distance from router. No problems.

Cons: Rebuilt old case for old games and was happy with performance on new pc with Win 7 so got another. The old games need to run on XP and this adapter does not work with XP.

Overall Review: I would recommend adapter, just be aware that it is only compatible with Win 7 or later.

Overall Review: Not gonna lie, I thought this was going to be a great new addition and replace my old wireless adapter. Instead, I was given a 2 day long headache and ended up reverting back to my old one. I was really excited about this one as well. I did as I did when I got my old adapter. Turn off PC, unplug old adapter, install new adapter, turn on pc, run driver disc, restart, no internet. Troubleshooting kept telling that my PC doesn't have a "Valid IP." Giving it some weird new IP. Even after removing it and replacing it back with my old adapter, it still didn't work. I kept going through options and figuring out any way to fix it but I got nothing. Only thing that worked was resetting the PC. Now I'm afraid to try it again incase it does do it again. Well at least the stand can connect to my old adapter. Pretty much paid for a headache and a couple of antennas. Because that's all I got out of it. This was installed on a Win 10 x64 bit system and I have seen other reviews shown it worked but unfortunately for me it did not.

Did you find this review helpful?
Manufacturer Response:
Hi Corin, We are sorry for the difficulty you are experiencing. We appreciate your feedback and would like to help you solve the problem. We need more information from you to provide possible solutions to solve your problem. Please contact our tech support at 1(800)652-6776 or write an email to "support@edimax.us". Our tech support team will assist you with the issue. Best Regards, Edimax Customer Support
Anonymous
Ownership: 1 week to 1 month
Verified Owner
It's just OK8/3/2016 8:05:10 AM

Cons: Purchased 7/25/16 based on BOTH Edimax & Newegg web pages tech descriptions listing 1.8 meter length of cable between adapter board and antenna extension. I needed minimum 5 feet of coax for where the antennas were to be placed. Product shows up with 1.zero length of meter for grand total of 39 inches not the 69 inches as advertised. I notified Edimax & they said they were going to correct the web pages to show 1.0 length and not 1.8 meter. Too late for this customer.

Overall Review: See Cons. Rather than return I decided to install the board and reconfigure my desk/credenza to make room for the antennas at a lower height. Board installed easy, Windows 10 drivers were available from Edimax web site. After spending a couple of hours of trying to fine tune and test different configurations on my router as well as the Edimax adapter, the maximum connect speed I can squeeze out of this is 150mbps on both my 2.4 and 5 ghz band. I also have a backup dual band router and the Edimax connected the same max speed on that one too. Is the lower antenna height the problem? Probably, but that brings me right back to the fact that they did not provide the 1.8 meter length as advertised. I purchased this to replace my Rosewill RNX N600UBE dual band adapter. The Rosewill worked perfectly on 5ghz band for two years and connected everyday all day at 300mbps speed. Then I upgraded from Windows 7 to 10 and the Rosewill would only connect on 2.4ghz band. I contacted Rosewill and they said there would be no Windows 10 driver update for their product to turn on the 5ghz band. So I purchased the Edimax EW 7822PIC. Between the problem with the 1.8 vs 1.0 meter coax cable for the external antenna and the lower connect speed I will have to say that at this time I am a bit underwhelmed with this Edimax dual band adapter.

Did you find this review helpful?
Manufacturer Response:
Hi Sir/Madam, We apologize for your inconvenience. If you have any further questions or concerns, please feel free to contact us at 1(800)652-6776 or email us at "support@edimax.us". Best Regards, Edimax Customer Support