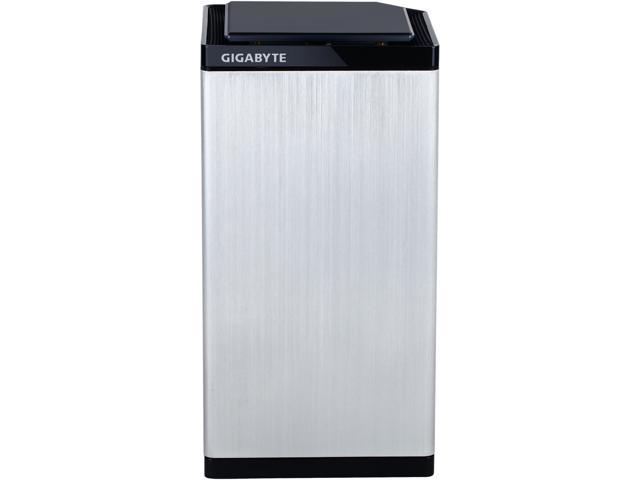 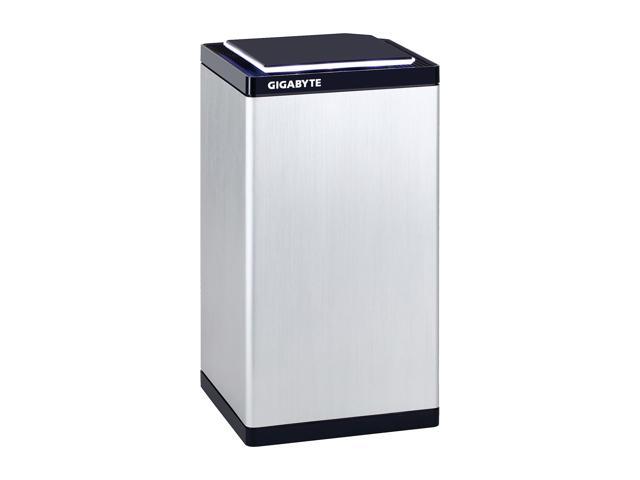 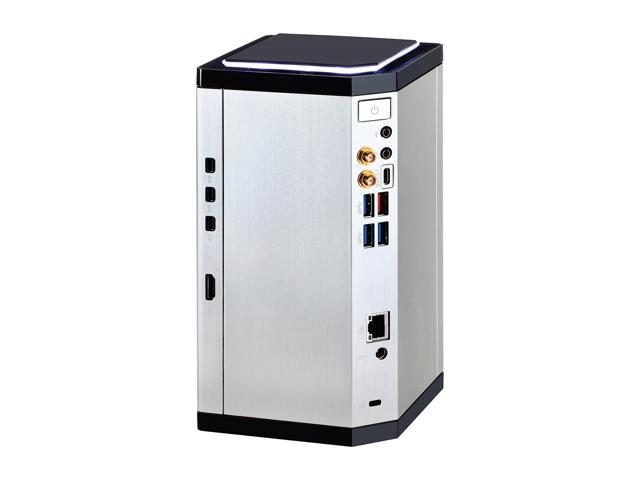 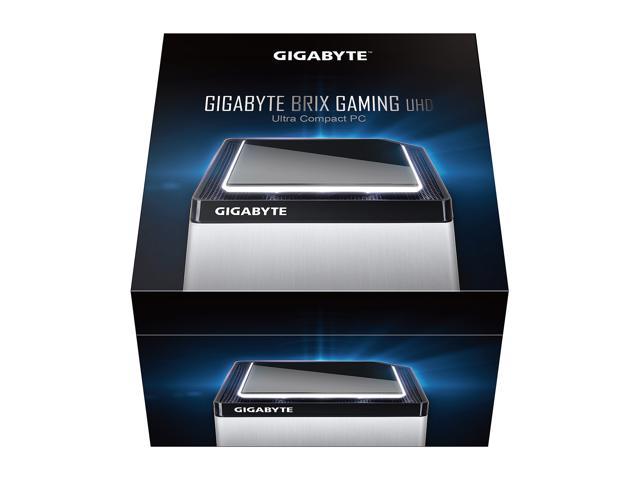 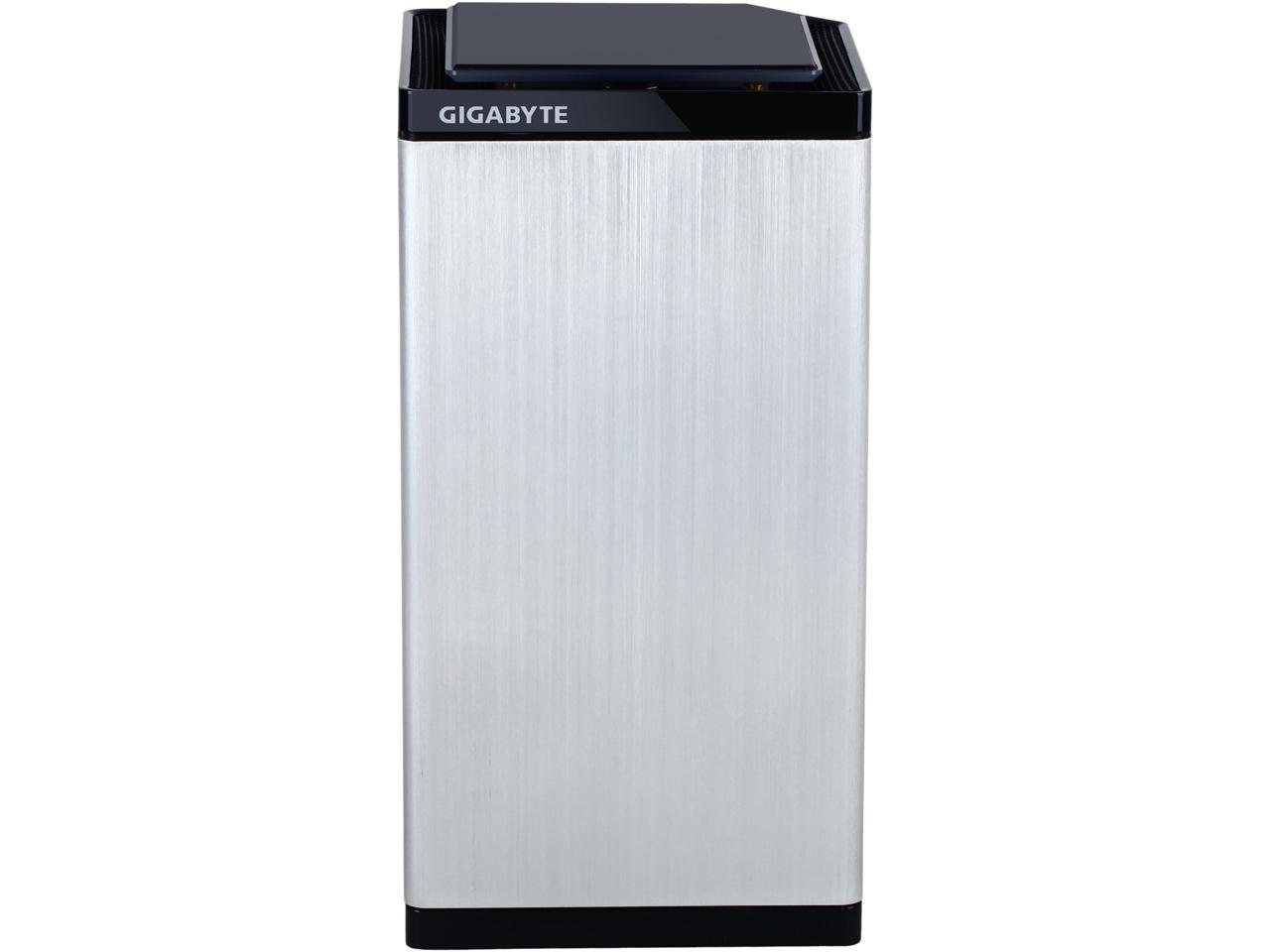 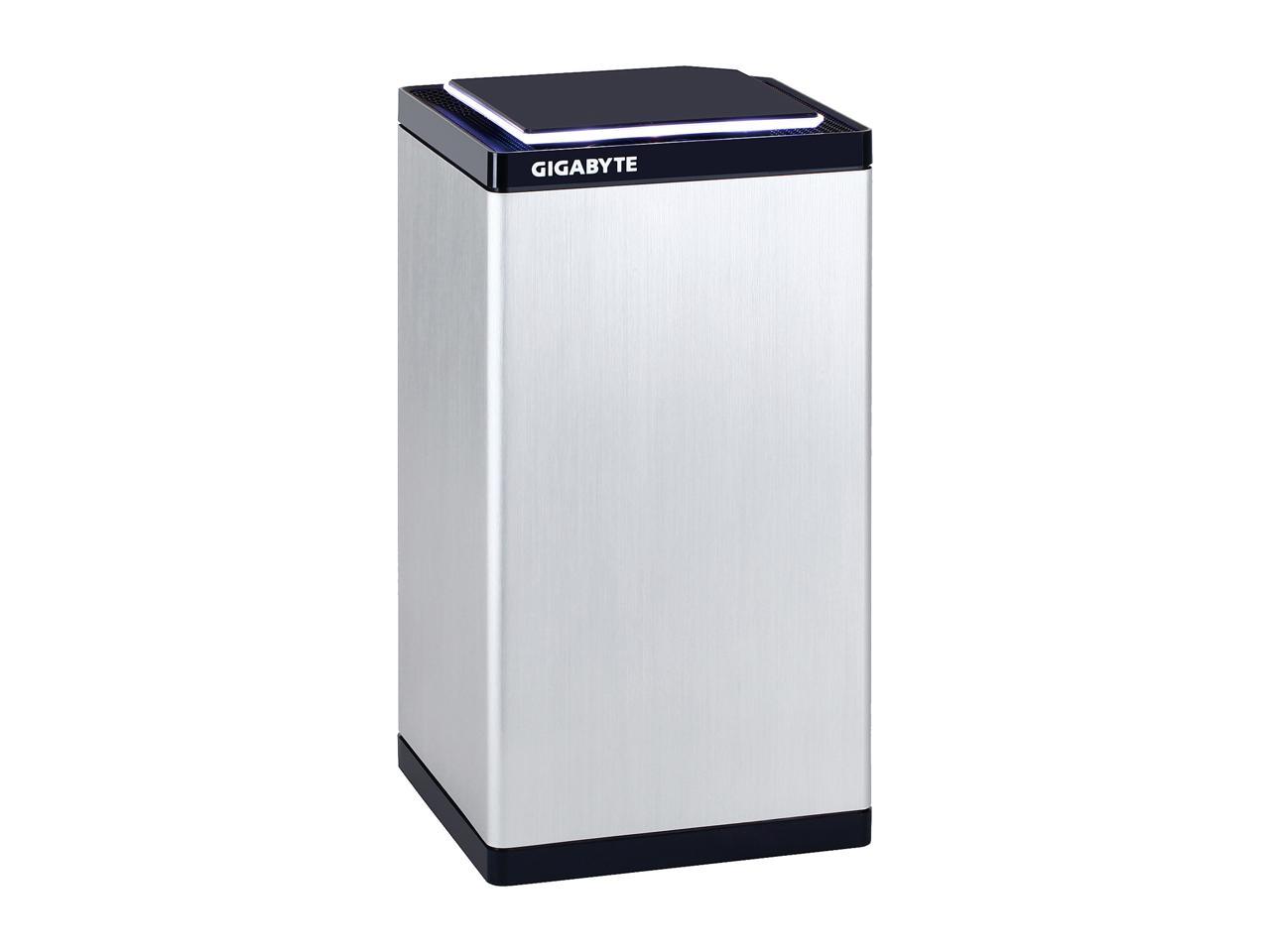 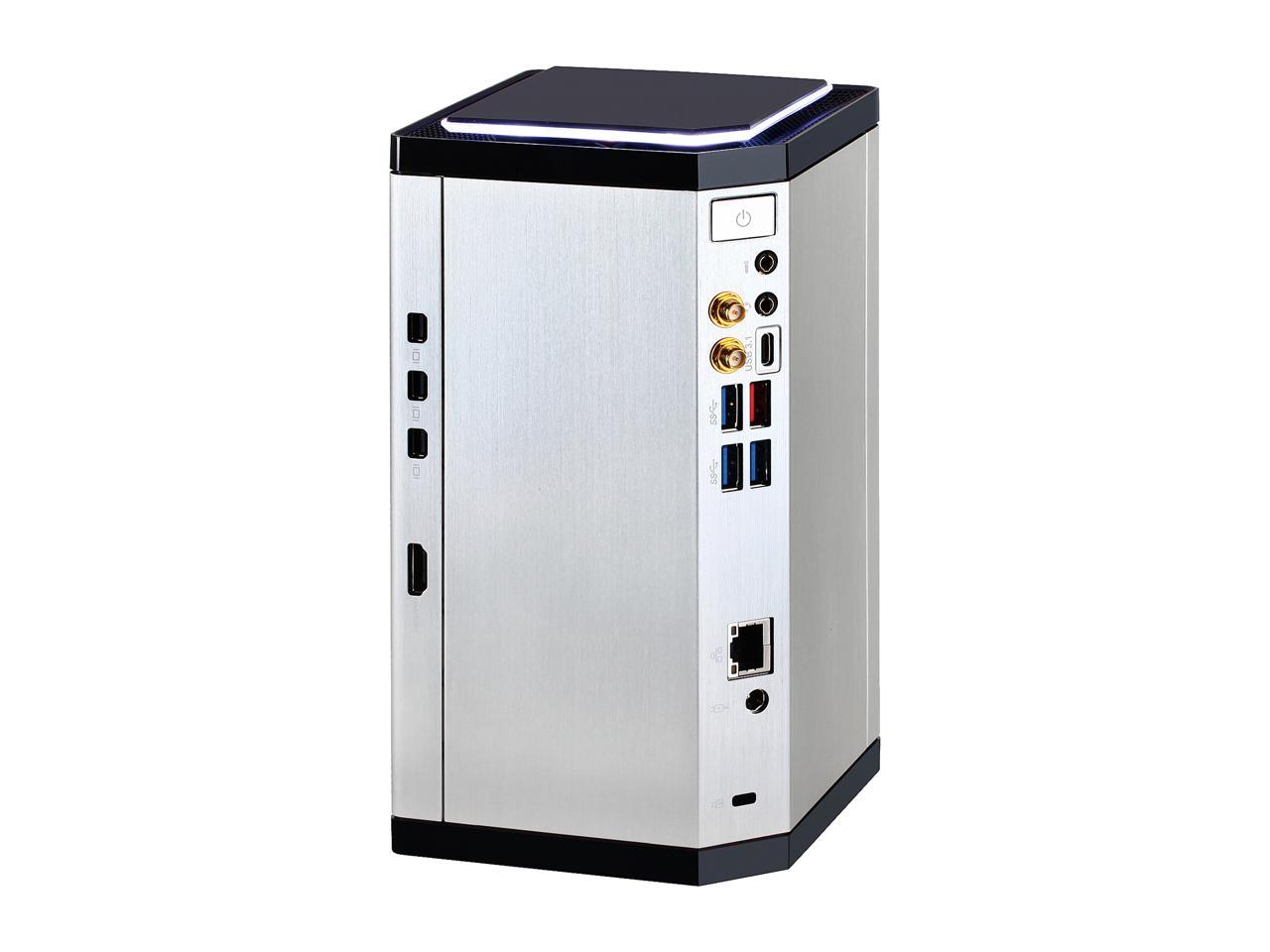 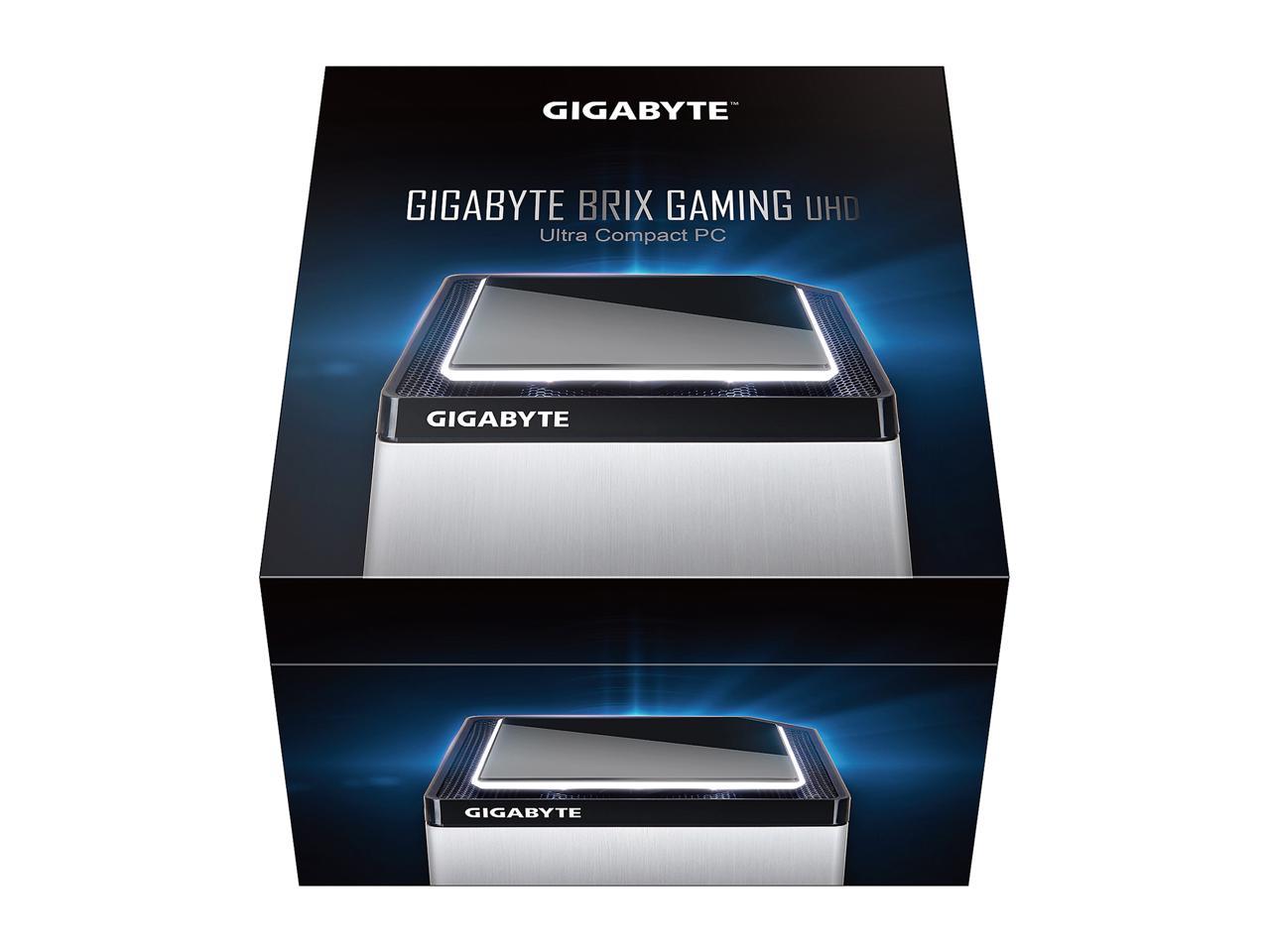 * Wireless module inclusion may vary based on local distribution. Gaming Like You’ve Never Seen Before
The BRIX Gaming UHD is the newest BRIX in the Gaming family, with many gaming features that users saw with its predecessor, this BRIX is no different. It sports a high-performance Intel® Core™ Processor, Core i5 or i7 and an NVIDIA® GeForce® GTX 950. The BRIX Gaming UHD improves upon its support for 2.5" storage drives, as well as the newer M.2 flash based storage drives by allowing users to install two of each. Users will find that a Wi-Fi module comes pre-installed on the BRIX for added convenience. In its latest iteration, the BRIX now supports the newest SO-DIMM DDR4 modules, supporting up to 32GB of memory.

All of these features and more can be found on this BRIX Gaming PC, it is designed to be the center of your home entertainment needs. Whether on a desktop or as a console replacement, this unit can do it all.

The New Standard in Compact Computing
With the BRIX Gaming UHD weighing in at only 2.6L, GIGABYTE has been able to achieve the impossible. GIGABYTE has been able to build a PC that has a large variety of parts and components with performance comparable to a high-end gaming desktop PC. Not only that—its sleek and stylish design makes it suitable for any environment users plan to place it in.
Powerhouse Graphics NVIDIA GeForce GTX 950
The GIGABYTE BRIX Gaming UHD is designed with a dedicated GeForce GTX 950 graphics card, a true gaming GPU made for PC gamers. Transform your PC into a gaming rig that rivals any game console to enjoy fast and responsive MOBA gaming and the latest game titles in 1080p. Users have the option to push the envelope even further by utilizing the 4K function to experience four times the pixels used in standard HD and with the BRIX Gaming UHD's multiple video outputs users can have the ability to display four 4K images. Powered by NVIDIA Maxwell™ architecture, the GeForce GTX 950 delivers 3x the performance of previous-generation cards. Additionally, Maxwell™ improves greatly in three main areas of gaming which are anti-aliasing, ray tracing and most importantly, virtual reality.

Powered with Intelligence, Intel's i7 or i5 Processor
With amazing performance and stunning visuals the GIGABYTE BRIX Gaming UHD, powered by 6th Gen Intel Core processors will help take things to the next level and transform how you use a PC. The performance of 6th Gen Intel Core processors enable great user experiences today and in the future, including no passwords and more natural user interfaces. 6th Gen Intel Core i7 and Core i5 processors come with Intel Turbo Boost 2.0 Technology which gives you that extra burst of performance for those jobs that require a bit more frequency.
Sleek, Cool & Quiet
From the looks of the exterior of the unit it's obvious that a lot of innovation went into the development of the GIGABYTE BRIX Gaming UHD. Many hours have been spent on improving performance of the cooling system, thus we created this ergonomic thermal design that allows GIGABYTE to keep the system cool and at the same time as quiet as possible. The components within this PC were arranged to reduce air resistance to allow maximum airflow so the high performance CPU and GPU can remain cool even during heavy loads while the user is gaming or stressing the performance of the system. With all this innovation in the BRIX Gaming UHD's development we were able to reduce the acoustic level under peak load to a mere 36dB—quieter than sound levels in a library. Connecting the Future —
USB3.1 in Type-A and Type-C
Versatility is one of the BRIX Gaming UHD's strengths, with multiple USB3.0 ports users can connect all of their devices directly to the unit. The BRIX offers the next generation of USB connectivity, with support for both USB3.1 standards in Type-A as well as the reversible Type-C. Network Connectivity
The BRIX Gaming UHD is designed to simplify the desktop PC as well as reinvent what a gaming PC is all about, wireless and bluetooth are included with this PC via a M.2 PCIe expansion card for Wi-Fi. This card conforms to IEEE 802.11 a/b/g/n/ac wireless standards as well as the latest in bluetooth technology, BT4.2. For enthusiasts who prefer the traditional method to connect to the internet GIGABYTE has also included an Intel Gigabit Ethernet port, supporting 10/100/1000Mb speeds.
Storage Expansion
With more and more users demanding larger storage and as content continues to grow in size, GIGABYTE's BRIX Gaming UHD has the solution. It supports multiple drives, four (4) total, which users can RAID their traditional SSD's with a M.2 drive to take advantage of the faster speeds.

* The entire materials provided herein are for reference only. GIGABYTE reserves the right to modify or revise the content at anytime without prior notice.

* Advertised performance is based on maximum theoretical interface values from respective Chipset vendors or organization who defined the interface specification. Actual performance may vary by system configuration.

* All trademarks and logos are the properties of their respective holders.

* Due to standard PC architecture, a certain amount of memory is reserved for system usage and therefore the actual memory size is less than the stated amount.

Pros: Great specs for the form factor. Fast quad core i7. Has decent graphics for a little PC. I am running a Samsung Evo 850 m.2 256 GB SSD as well as a Samsung 2.5in 500 GB SSD I purchased last year from NewEgg. Everything runs wonderfully.

Cons: It comes with a driver disk but as the unit doesn't have a CD/DVD drive you will either have to have a portable one or you will have to transfer the drivers to a USB drive. Would have been a lot easier if they had just included USB drive. Once that fiasco was settled and everything was installed and updated on Windows 10 Pro. I ran Handbrake converting a 5 GB movie to MP4 format to see what this little baby could do and that's when I heard the fan go crazy as I think Handbrake really taxed the CPU's. It was pretty damm loud. Sounded like a jet engine. Just be aware of that.

Overall Review: I'd like to see Gigabyte maybe widen and lower the chassis while adding a lower speed high efficiency quieter fan. However I have had no problems once everything was set up and its running like a champ. I really like the form factor and it boots extremely fast compared to my old desktop gaming system. There's room for expansion of storage space as it will accept up to 2 2.5 inch HDDs or SSDs. There is also room to add another m.2 SSD and raid them. All is all I totally would recommend this little PC.

Cons: The kit comes with a power supply unit in 2 parts. One is the power unit (in 100 -240V) which is connect to the PC. The other part is the cord connects the power unit to electrical outlet. This cord is for countries with 240V electrical outlet. I put in a support request through Gigabyte site on 2016-12-13 and a reply on 2016-12-15 insisting the plug is the right one. These are definitely quality control and customer support issues.

Manufacturer Response:
Dear Customer, Thank you for your comments. We apologize for your difficulty with your GIGABYTE product. Please contact us at newegg-support@gigabyteusa.com with the case number 139469 in the e-mail subject line. We will provide personalized service and analysis to help solve your issue ASAP. If the matter is urgent, please send us your contact number, and we will contact you. GIGABYTE VIP Support Team