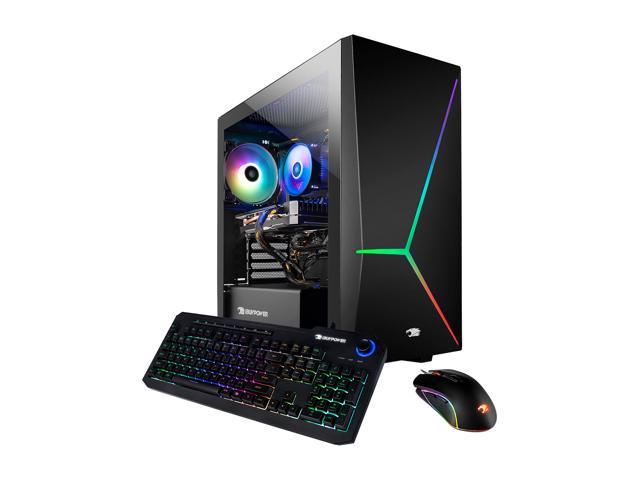 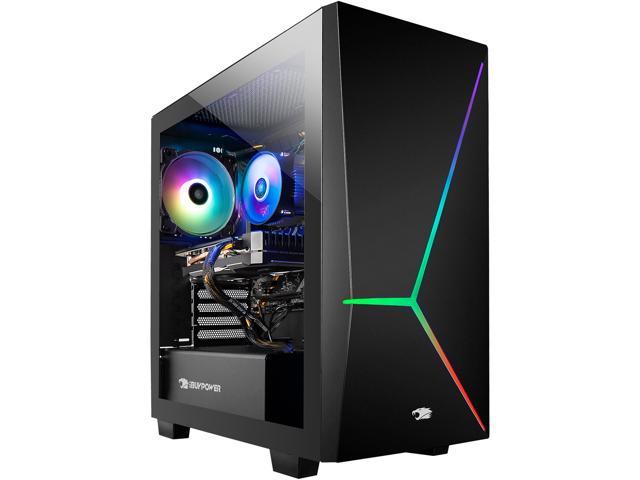 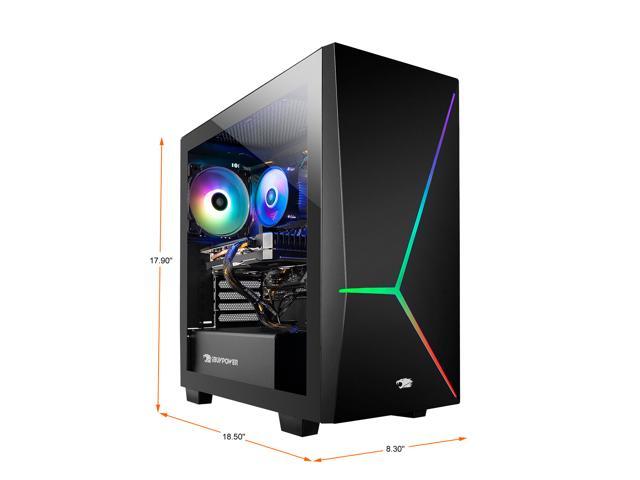 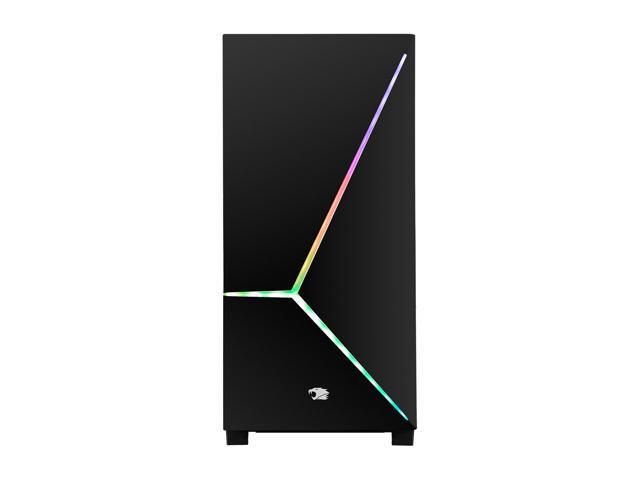 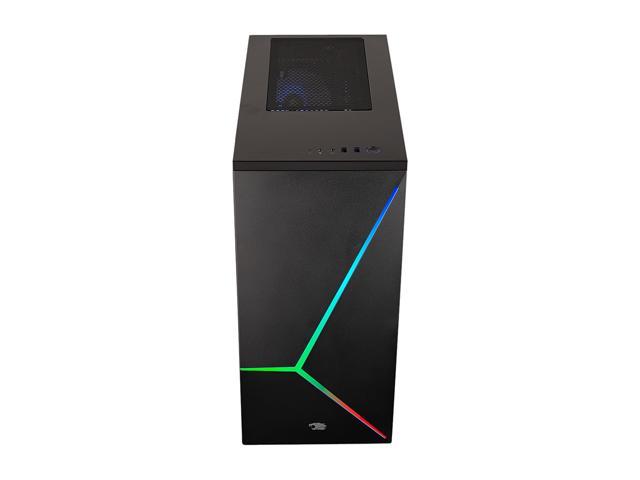 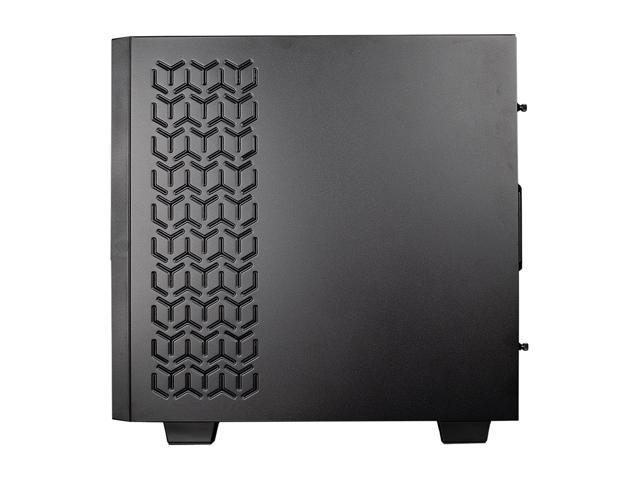 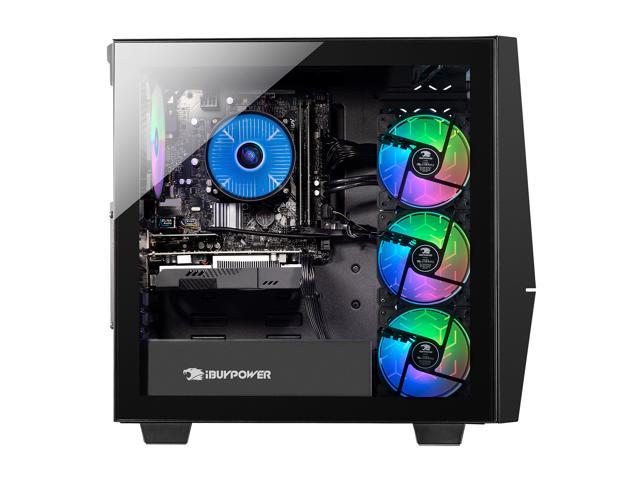 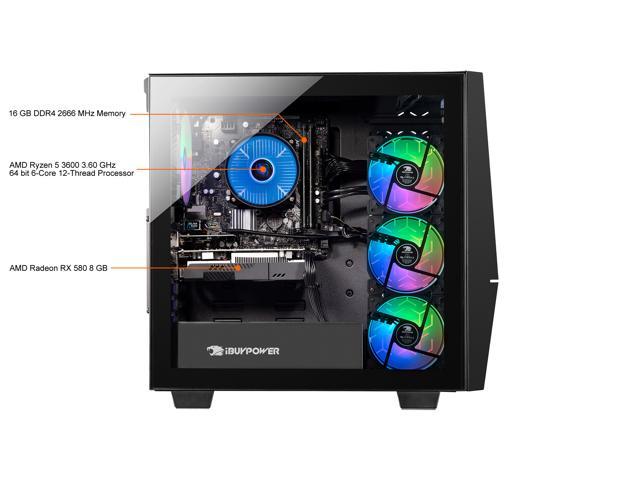 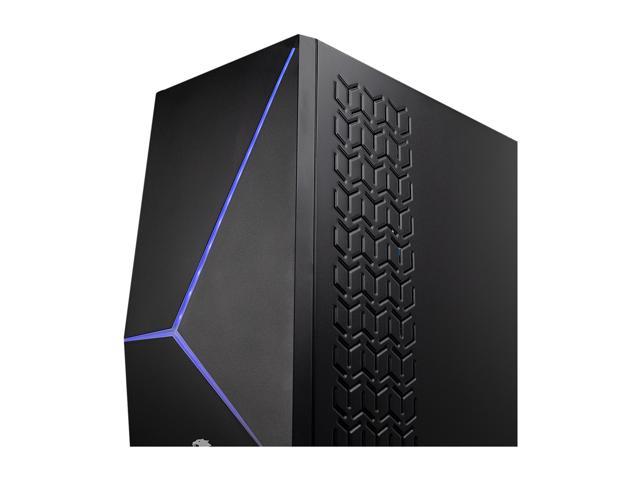 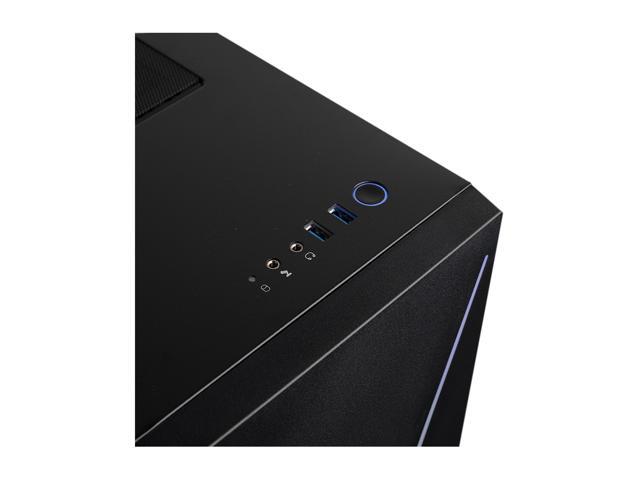 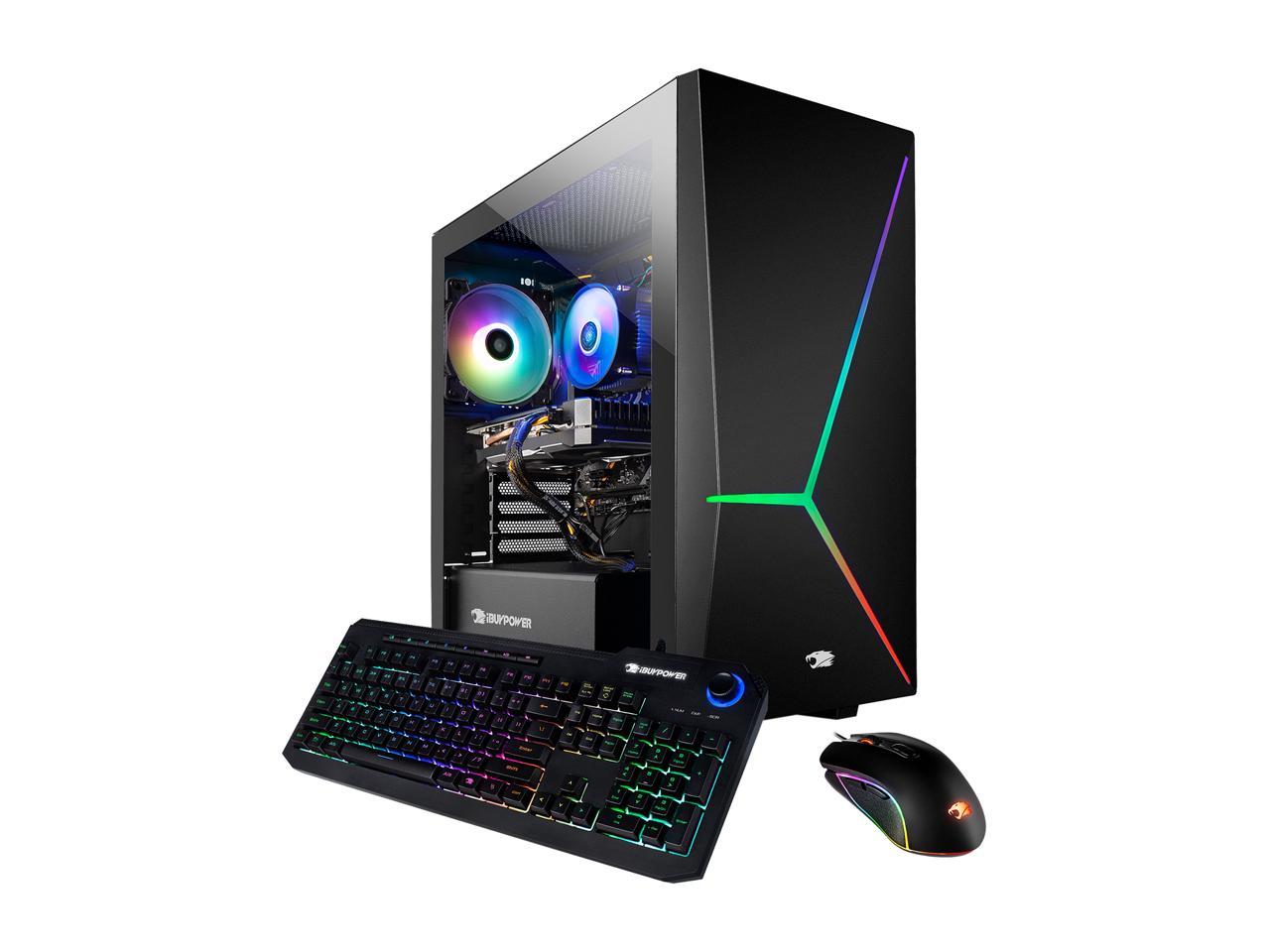 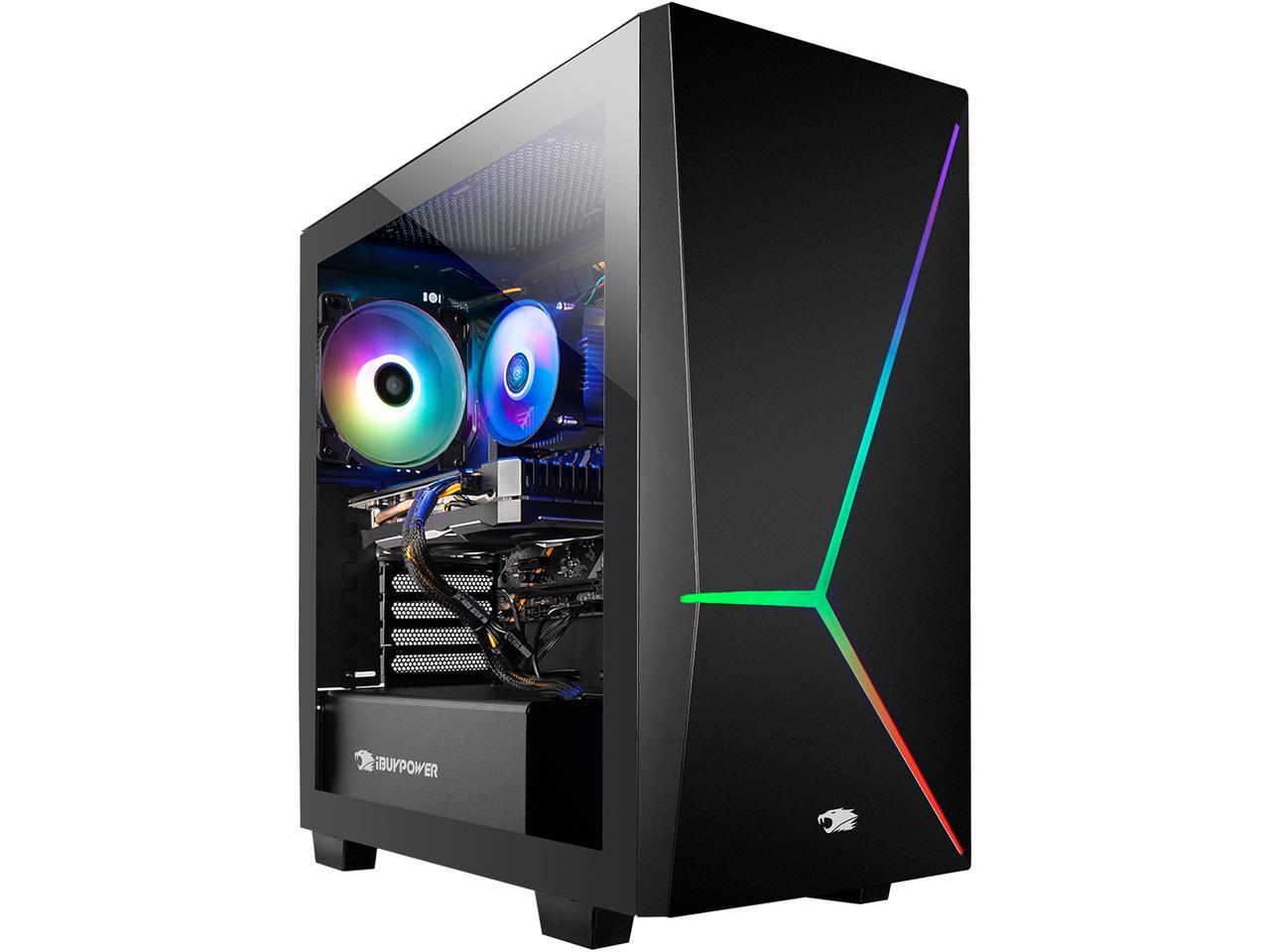 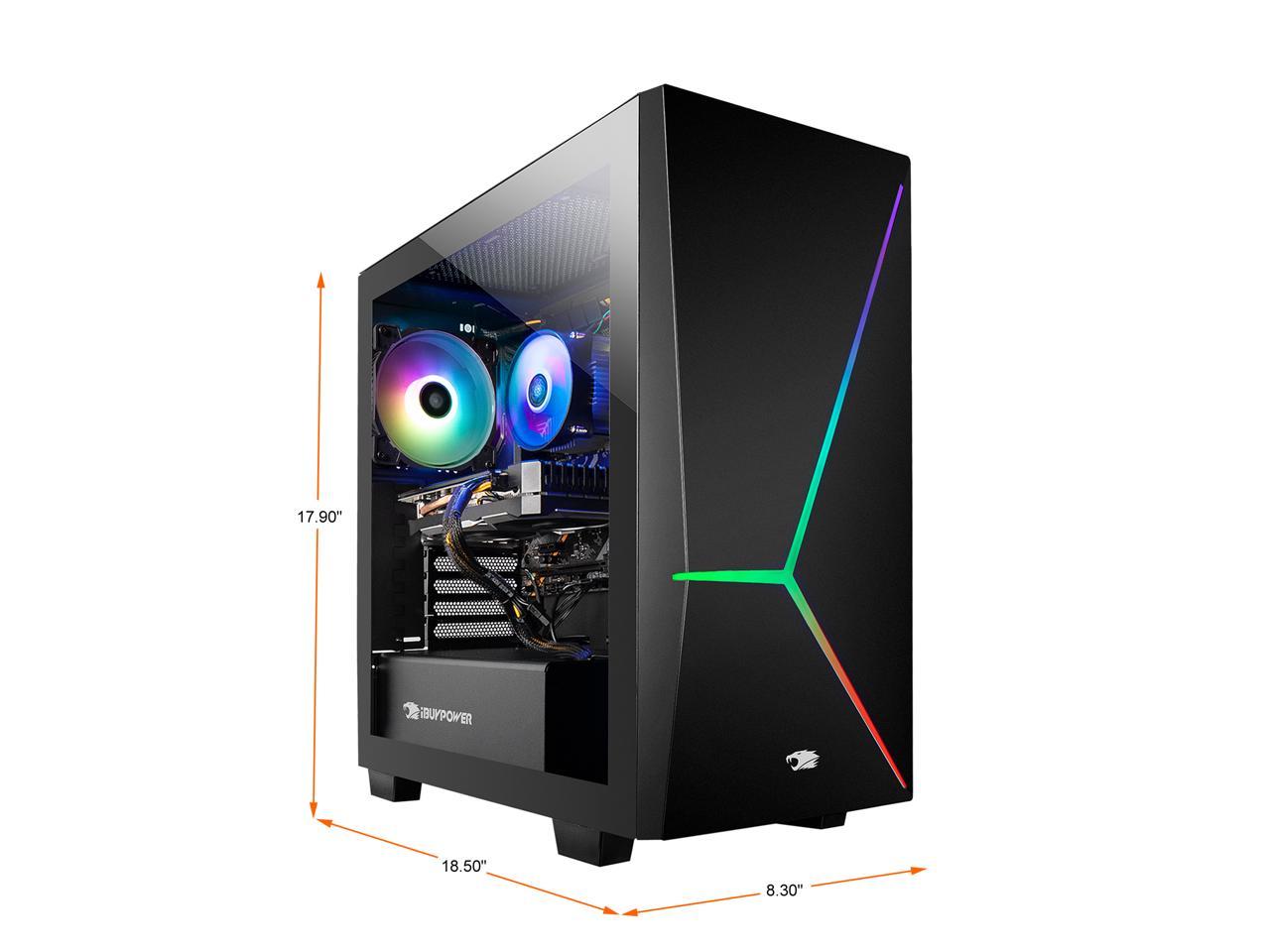 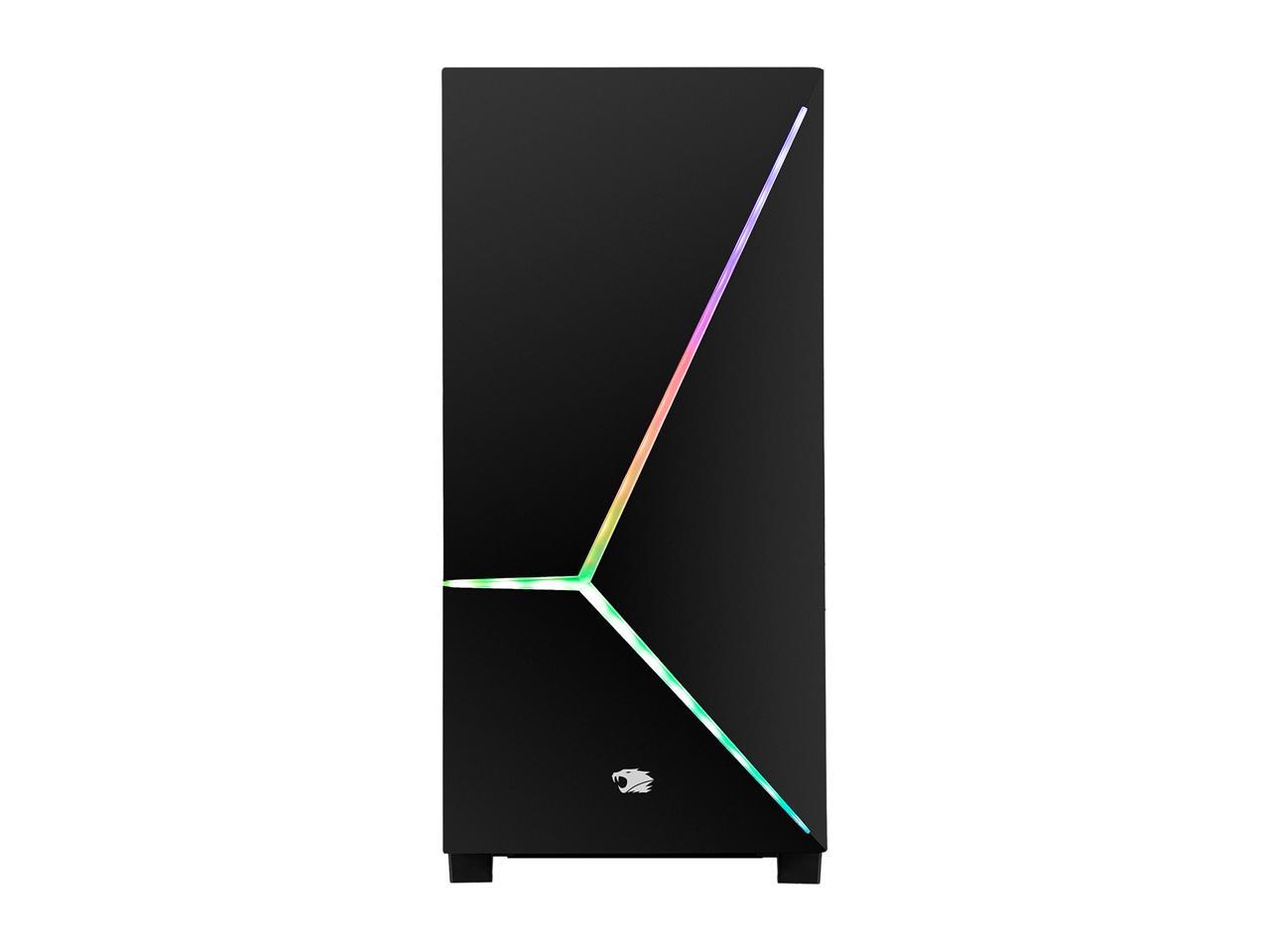 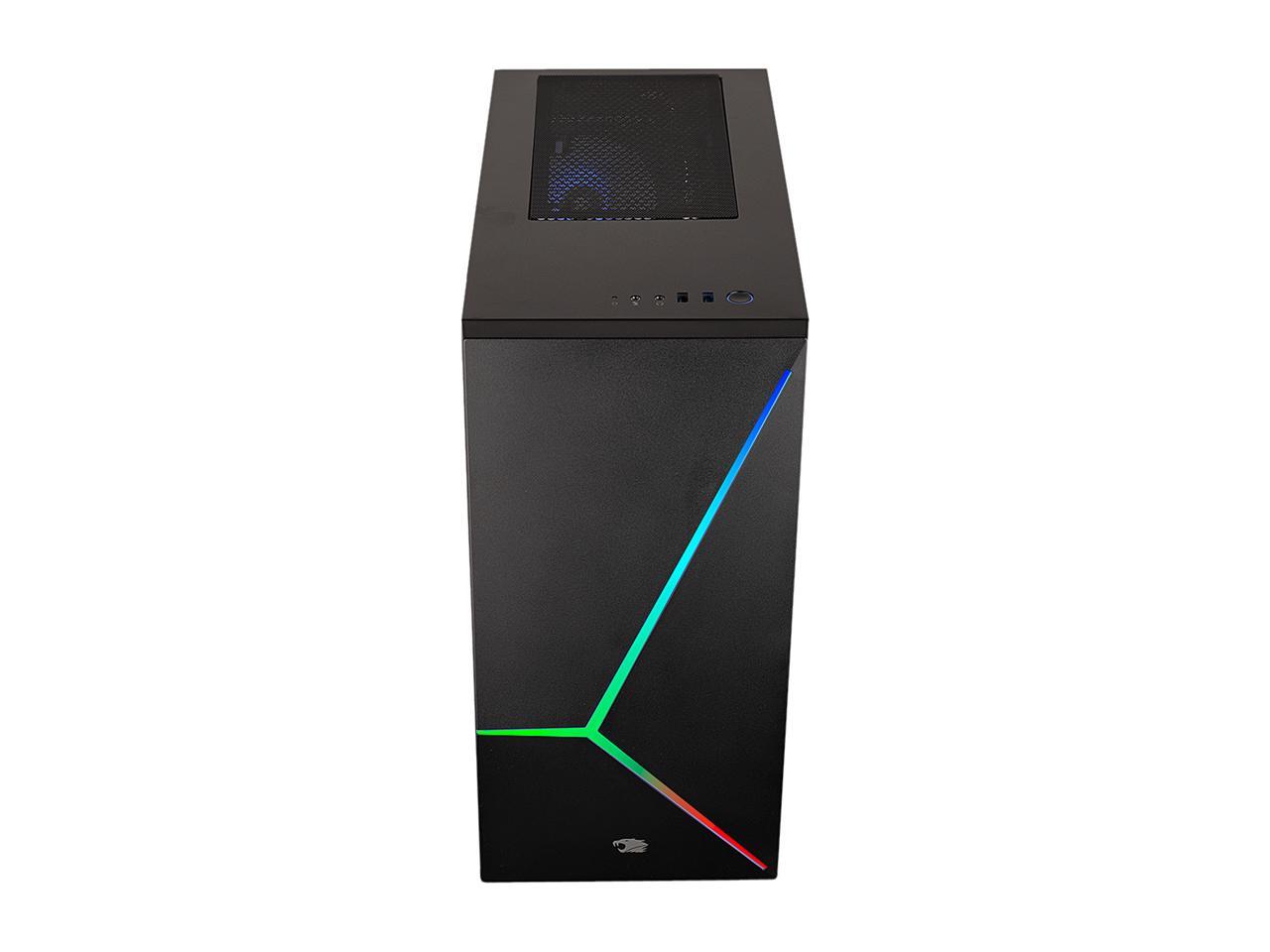 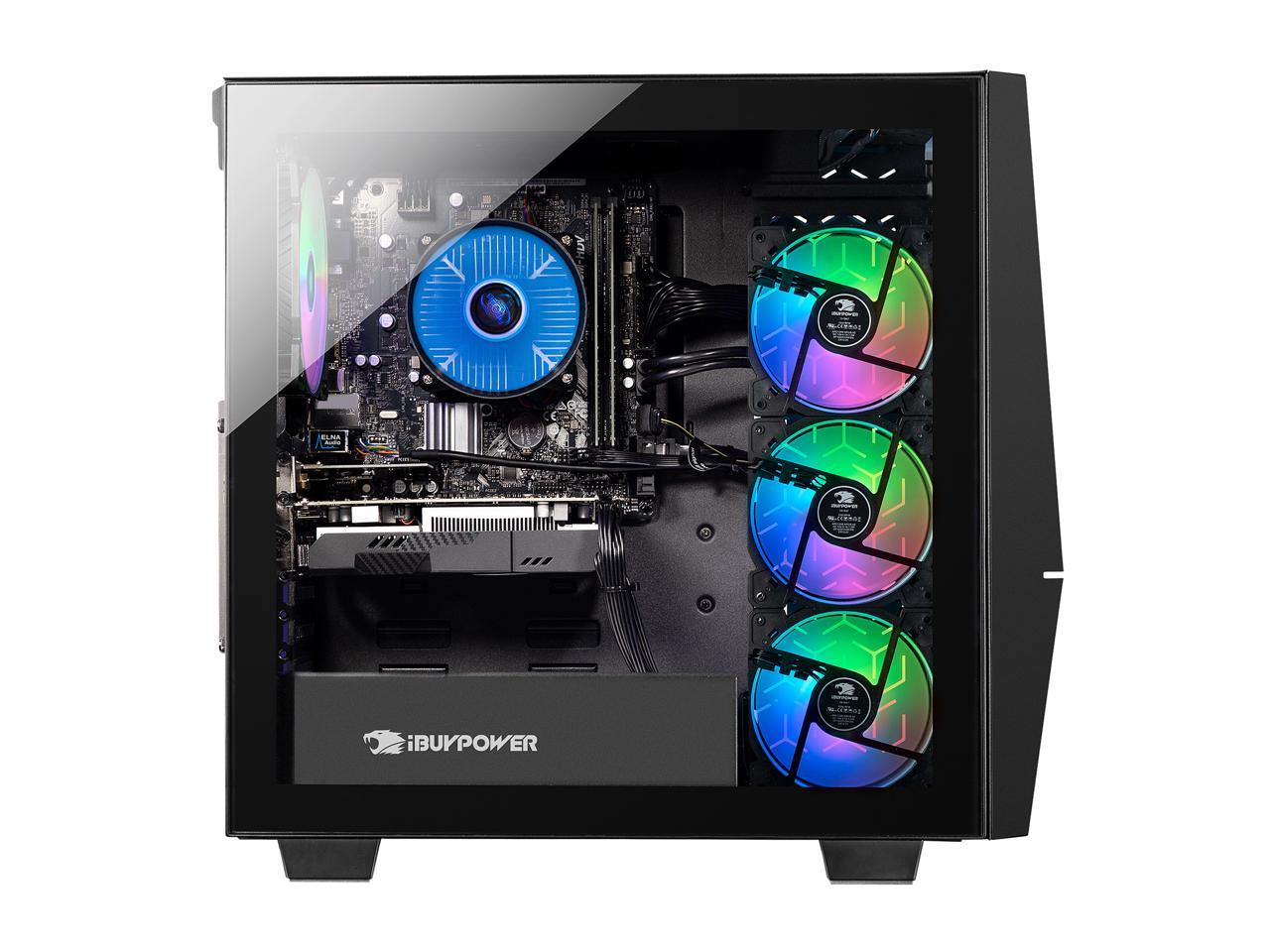 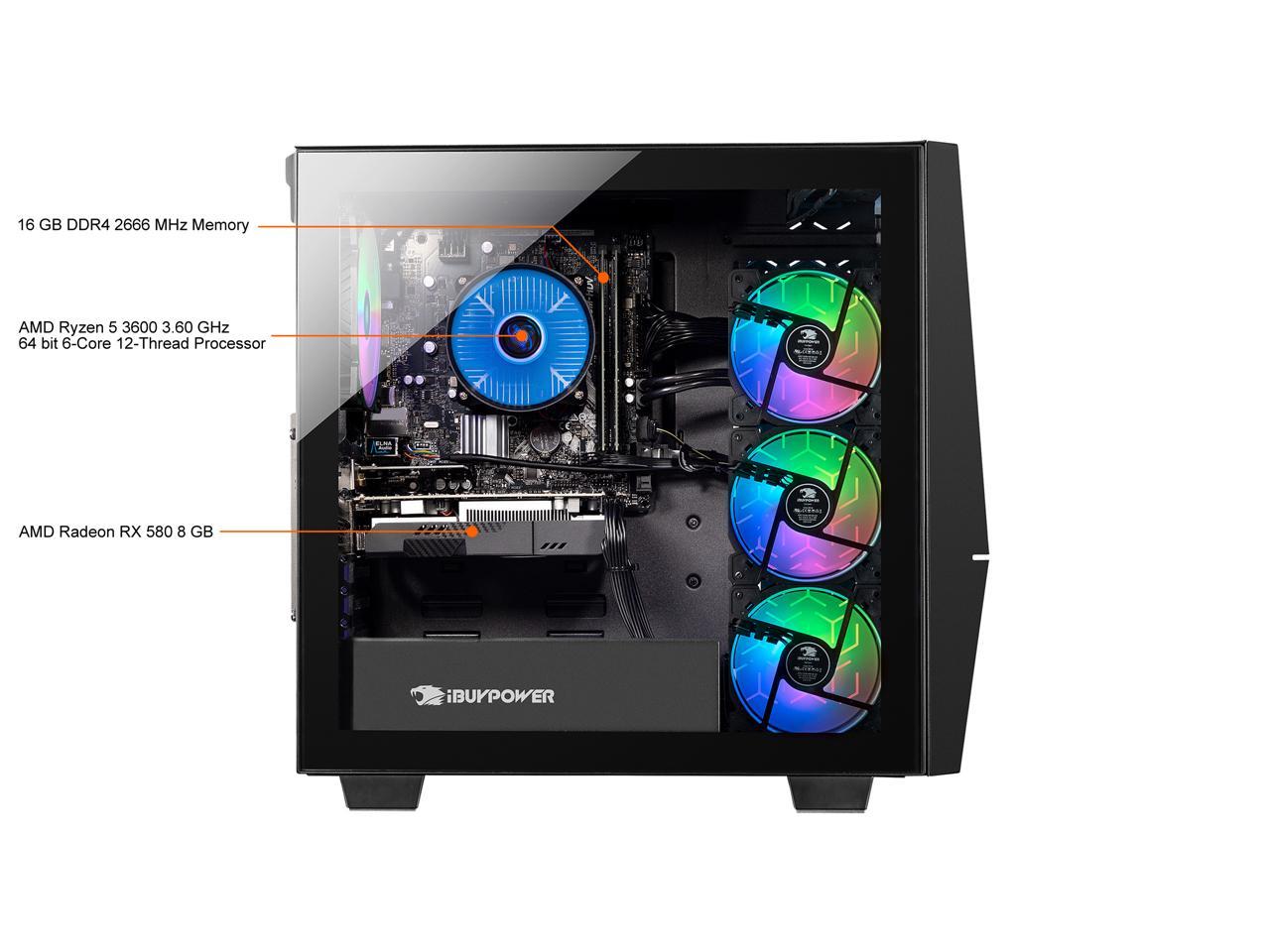 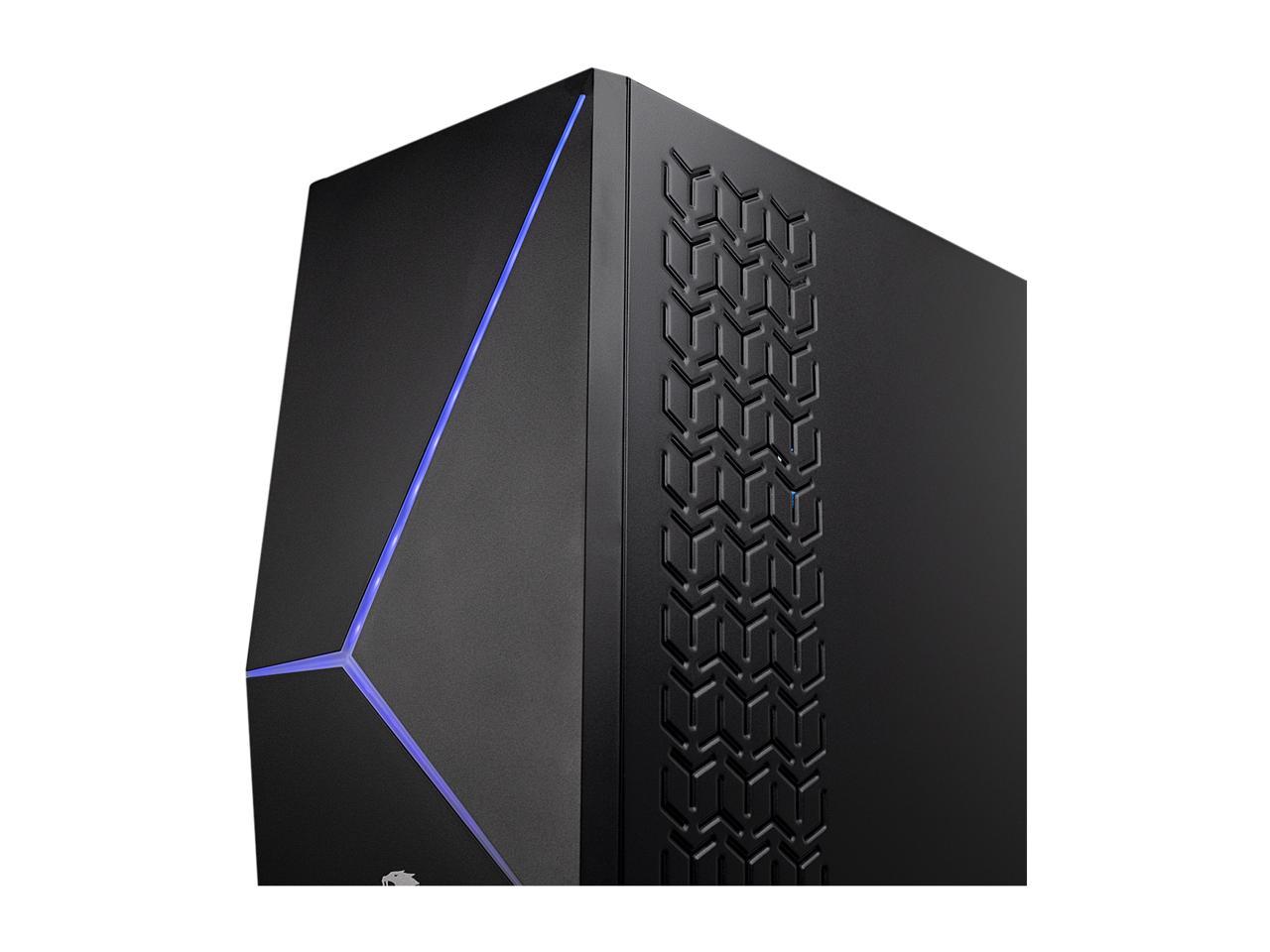 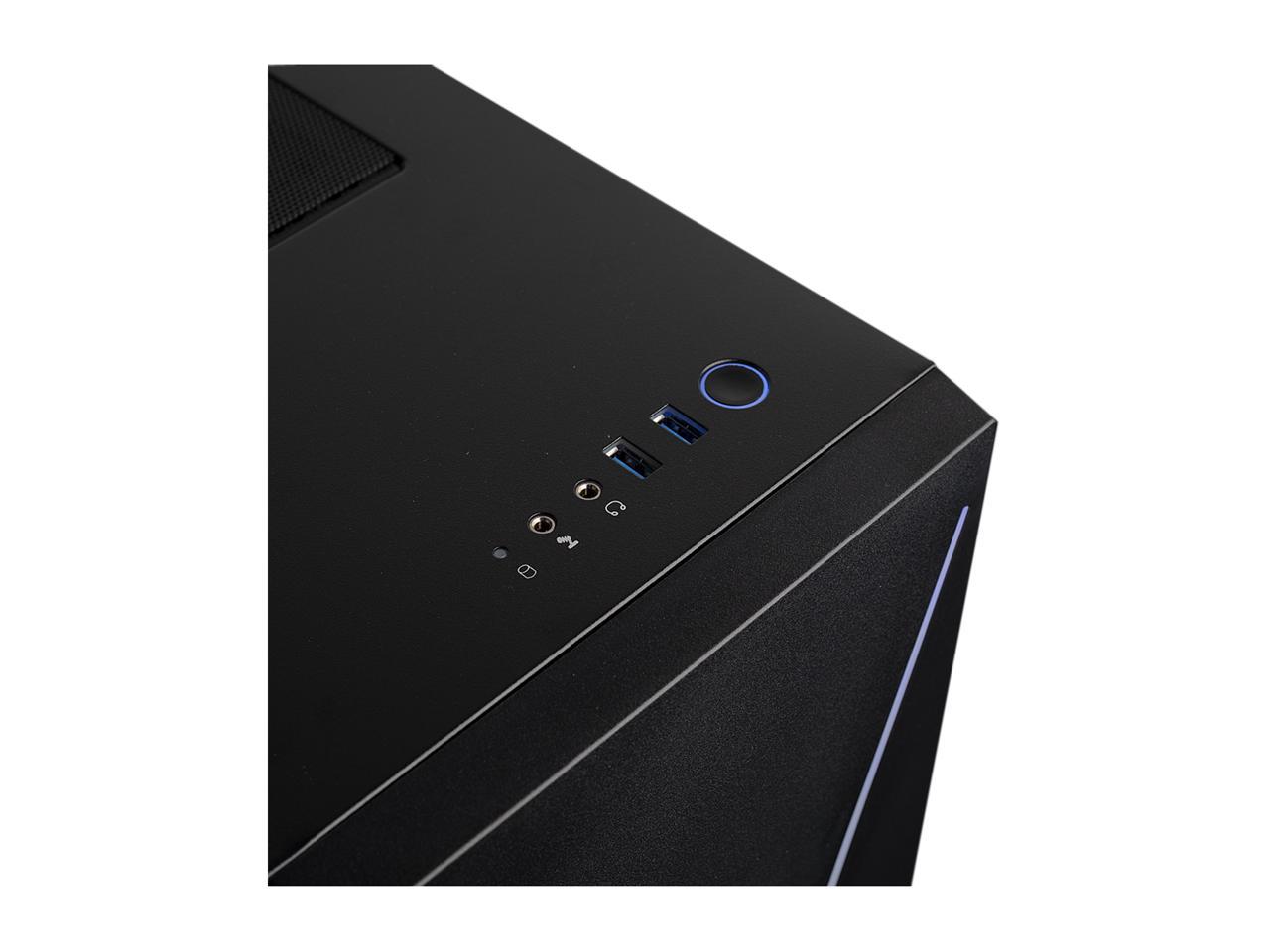 Take your gaming and multimedia entertainment to the next level. This powerhouse is armed with power- and value-packed AMD Ryzen 5 3600 processor (six cores, 12 threads), AMD Radeon RX 580 graphics card and 16GB DDR4 RAM to tear through VR games and the hottest AAA titles in Full HD. A clean-styled chassis is accented with a trident-shaped LED strip on the front panel, and has an edge-to-edge transparent side panel that showcases the neat build bathed in brilliant RGB LED lighting. A game-class keyboard and mouse are included for out-of-the-box fun.

Everyone deserves a powerful processor. Uncompromising features and smooth performance are finally the standard for every gamer- and artist-oriented system. Powered by the amazing Zen 2 architecture and manufactured using 7nm process technology, the Ryzen 5 3600 has 6 cores and 12 threads, offering exceptional parallel computing power to handle demanding tasks and multitasking. PCIe 4.0 allows you to take full advantage of the new-generation SSDs and next-generation graphics cards.

Based on AMD Polaris architecture and manufactured with 14nm process, the AMD Radeon RX 580 graphics card is specced with 2304 Stream processors, 8GB GDDR5 memory and 256-bit memory bus. A performance-class graphics card, the Radeon RX 580 empowers gamers to play anything from the latest MOBAs to the most popular AAA titles in Full HD and beyond, and also delivers the power to drive you into the next level of immersion of the world of VR gaming and entertainment.

Powerful Async shaders and new geometry capabilities enable unique support for DirectX 12 and Vulkan in the best version of Graphics Core Next yet. Get incredibly smooth and low-latency gaming at virtually any framerate with AMD FreeSync technology. Stream and record your favorite games up to 4K, H.265, 60 FPS with virtually no performance impact.

With ultra fast solid state storage, your Windows starts up / shuts down in seconds, your applications launch in an instant, and the over-all system performance is smooth and responsive, allowing you to do more in less time.

The massive 1TB HDD is a good place for libraries of movies, music, photos, documents and more.

Learn more about the iBUYPOWER Slate 4 163A

Overall Review: Unfortunately came in dead on arrival, seems to be a psu issue or the motherboard. I really wish these were tested before hand. So incredibly upset.

7 out of 7 people found this review helpful. Did you?
Manufacturer Response:
Hello, On behalf of iBUYPOWER, we want to extend our sincerest apologies for the negative experience that you had with your system. Want to thank you for bringing this issue to our attention. We can reassure you that all system was fully tested and was operation prior to leaving our warehouse. We are always looking for ways to better our service, and your feedback is an invaluable part of that process. Thank you. Best, iBUYPOWER Store Team
Christopher L.
Ownership: 1 week to 1 month
Verified Owner
was DOA when i originally got it4/6/2021 4:04:25 PM

Overall Review: it took 2 weeks to get it then 2 more weeks to get the replacement but is working this time wont let me change the rating but i would give it 4 now works great

Overall Review: The computer turns on fine, but it has absolutely no display and Ive tried everything to get it working but it just wont

Pros: The computer looks good inside and out although that might not mean much since I never actually turned it on. I also like the fact that it came with a mouse and keyboard. I wasn't planning on using them but their nice to have as backups just incase I guess.

Cons: One of the two graphics card fans were broken. It's also weird that the logos on the fans are different. I don't know if it's supposed to be that way or not but it's just something I noticed. I wish I could fix it but I don't know a lot about building or fixing computers hence why I bought a prebuilt. Anyway that's where the cons truly stop anything else would be me just nitpicking.

Overall Review: Overall seems like a great computer and pretty much what I was wanting. But it just sucks that it had to come damaged with a broken graphics card fan. I'm going to try and get a replacement and if that goes well I'll update the review.

2 out of 2 people found this review helpful. Did you?
Manufacturer Response:
Hi, We are deeply sorry to hear that your purchase of our iBUYPOWER gaming desktop was not completely to your satisfaction. We value each of our customers’ feedback and will do our best to update and solve any issues you may be having. It is unfortunate that issues do arise during shipping and some units do end up damage in transit. Please reach out to us in order for us to assist you with a replacement graphics card. You could also return the system to Newegg for a refund/replacement. Customer Service Hours: Mon - Fri: 8:30 am - 5:30 pm PST Toll Free: (888) 462-3899 Phone: (626) 269-5200 Email: support@ibuypower.com Chat: https://www.ibuypower.com/Support Technical Support Hours: Mon - Fri: 8:30 am - 5:00 pm PST Toll Free: (888) 618-6040 Phone: (626) 269-5170 Email: techsupport@ibuypower.com
Mike S
Ownership: 1 week to 1 month
Verified Owner
Runs well out of box....missing something shown in pic4/14/2021 4:15:28 PM

Pros: Overall, since its replacing a 10 year old PC here, everything ran smoothly right out of box. Load times, installs, and overall performance are exactly what I expected .

Cons: However...and this would have made me seek another item when purchasing ( tho now that I have it I guess Im stuck), the photo with a decent closeup of the motherboard very clearly shows 4 memory slots. The motherboard supplied not only was a shrunken version of what was shown, but only has 2 slots. Now, when I want to do a major memory upgrade, Im either going to be limited in the amount I can upgrade, or buy a whole new board just to accommodate this. They did make a caveat that the graphics card manufacturer may be different than shown, but made no such mention when it came to the motherboard.

Overall Review: The PC I was replacing was also by IBuyPower , and while the specs were woefully out of date, I never had a single physical issue with the system. I hope that this one lives up to its obsolete brothers example.

Overall Review: No signal as soon as I turn it on. When I removed the HDMI cord and plugged it in with an older display port then I was able to get some visual, awful pixellated. Kept on rebooting and doing the blue screen of death/Windows sad face screen only to reboot over and over without ever getting into windows. C'mon guys? doesn't anyone check these things after being assembled for quality control?

Overall Review: Im very new to PC life, I wanted to start gaming more but I literally know nothing about what goes into building. So thats why I decided on a pre-built one rather than making my own. With the help of my boyfriend, I landed on this product as a first-time desktop So far, while I have not yet dived into the full extent of what this thing can do, I am very pleased at its performance so far. The only thing that I can really critique is how loud the fan is, but I can ignore it. Great price and power for someone like me that is just getting into PCs