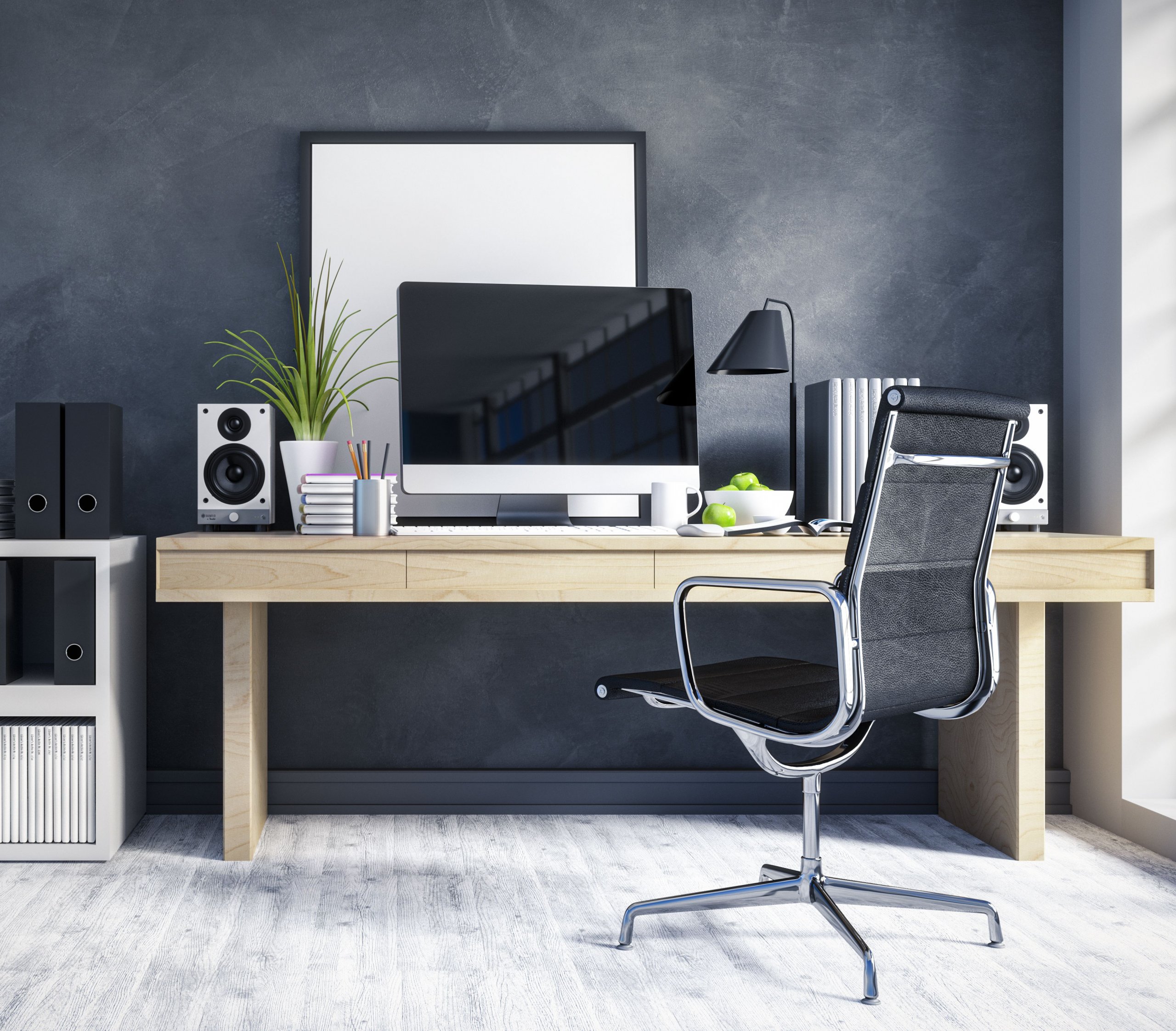 Whether you are working from home or opening up a small office, it is never too early to start thinking about data storage solutions. And for a SOHO environment, network attached storage devices make a lot of sense. Adding a NAS enclosure can pay long-term dividends in terms of cost, time savings, and feature set. Compared to other data storage solutions like dedicated file servers or external USB drives, NAS devices strike a good balance of all three qualities.

This article was created in cooperation with Western Digital and QNAP

At its core, a NAS is an enclosure for storage drives that provides a local network with access to those drives. They can be considered computers in themselves, complete with a processor, mainboard, memory, and I/O ports. But what makes a NAS distinct from a computer is a singular focus on data storage.

A small office user may eventually come to a point where their primary computer no longer offers enough storage space for their needs and upgrading the drive might not be worthwhile or even possible. After all, a desktop has a limited number of storage bay slots, while a laptop practically has none aside from its primary drive.

An external USB hard drive may solve data storage problems in a pinch, but they require a physical connection to the computer to be used. On top of that, are limited to USB transfer speeds and only serve one computer at a time. They can be shared on a network, but that requires a primary computer to be turned on.

A NAS offers always-on expanded file storage that can serve multiple computers simultaneously without anyone of the limitations of a USB drive or the upfront cost of a dedicated file server. For expandability, some NAS devices offer up to 24 bays—though most SOHO users might only need two or four at the most. For a small or home office, we recommend anywhere from one to four bays.

For the typical SOHO space, consider a NAS like the QNAP TS-x31k line, which comes in one- to four-bay configurations. 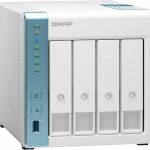 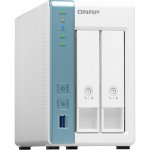 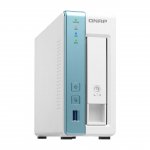 A NAS can also play an active role in protecting your data and ensuring it doesn’t get lost. Drives such as the QNAP TS-431K for instance, can protect your data from natural disaster, hard drive failure, theft, and even plain human error. In a SOHO environment, you can automate the backup of local computer files to a NAS so that in the event the computer becomes damaged or stolen, you can still have access to your documents. You are not limited to just laptops and desktops either. With a QNAP NAS, you can back up Windows and Mac computers, smartphones, external drives, and even other NAS devices and file servers.

If you’re wary of losing data on the NAS or across your entire network, rest assured that with remote replication your NAS can backup data to remote storage. For an added layer of protection, some NAS devices like the TS-431k can even integrate with cloud services such as OneDrive, Amazon S3, Google Cloud Platform, and more. That way, even if your office and remote storage are affected by a natural disaster, your data will still be available.

Compared to backups, snapshots record data at set points which can be restored to at a later time. Snapshots do not make full copies of data, and only capture the state of a system at the point of capture. And unlike backups, snapshots can be restored to very quickly. Many NAS devices from well-known brands will often include snapshot functionality right out of the box, such as QNAP’s QTS, which provides block-level snapshots that take up allocated space outside of the normal storage volume.

In a small office, it would allow you to quickly restore files you may have accidentally deleted or modified. And if you have multiple NAS devices, you can replicate snapshots across the different drives. That way, if snapshots on one drive do not have the data you need, you can look for an older version stored on another NAS.

If you have multiple workstations in your home office, a NAS makes it easy to access the same file on whatever device you use, provided it is connected to the network. No more emailing a file to yourself in order to work on it at another computer or saving it onto a portable USB drive or in the cloud. It can free up storage space on your workstations as well, as you can save your work directly to the NAS instead of saving to onto the local drive.

Provides your own cloud on-the-go

If you want to share files to people outside of your network, you don’t have to email them as attachments or even upload them to the cloud. Instead, some NAS drives allow you to share files through dedicated services typically provided by the maker of the NAS. In the case of QNAP, they offer myQNAPcloud, which allows you to access the NAS from outside the network. By using a built-in cloud service, you can bypass the need to set up a VPN yourself and focus on your work.

After purchasing a NAS, the next step starts with looking for hard drives or solid state drives you want to use. When taking cost, durability, and use case into consideration, it generally makes the most sense to go with traditional spinning hard drives (HDD). Most NAS devices accept your standard 3.5” or 2.5” hard drives, but don’t start scrounging for old desktop hard drives quite just yet.

Compared to a desktop or laptop, a NAS will subject hard drives to much more wear and tear. This stems from continuous use over extended periods of time as a NAS can run for 24/7 for months or years on end. This means more heat and more vibrations, which can impact a drive. To meet such demanding requirements, manufacturers typically differentiate desktop and NAS hard drives. In the case of Western Digital, you can choose from the desktop-oriented WD Blue line or the NAS-oriented WD Red Plus line.

For a small or home office, consider a moderately priced NAS drive such as WD Red Plus. With a 180 TB/year workload rate, it can sustain much heavier usage over the same period of time compared to consumer-grade desktop drives. NAS drives like the WD Red Plus come optimized and tested for compatibility with NAS systems.  As for storage capacity, NAS drives can range from *1 TB up to 14 or 18 TB depending on the model. For a first NAS system, consider a moderately priced option such as the WD Red Plus 5400 RPM 2 TB NAS drive.

(*1 TB = 1 trillion bytes. Actual user capacity may be less depending on operating environment) 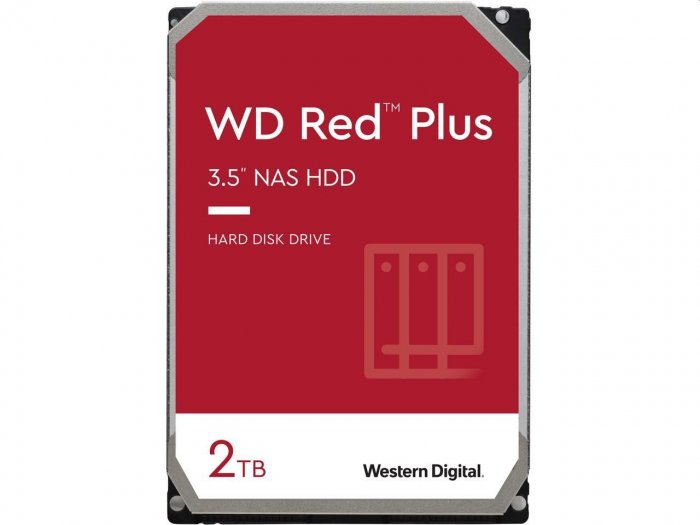 If your needs are particularly light, and you don’t expect enormous workloads, you might find some savings with the WD Red HDD. The WD Red HDD features a more modest 2 TB – 6 TB capacity. For a home or small office setting that involves more idle time where the drive can perform background operations however, these affordable intelligently designed drives might be a better fit. They feature the same exclusive NASware 3.0 technology available in WD Red HDDs, and boast an MTBF (mean time between failures) of up to a million hours! Low-demand operations might find greater value in the WD Red 2 TB NAS Drive. 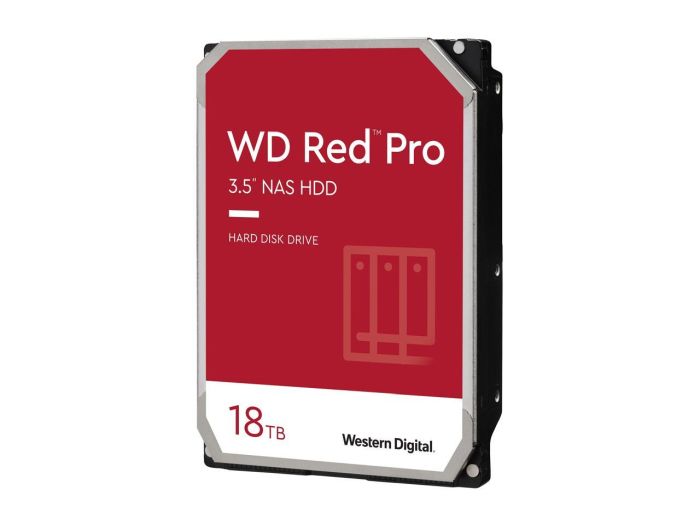 If your needs extend beyond those of the low-lift home system, or that of a growing small office, it might be time to consider a NAS drive that’s a little more substantial. The WD Red Pro was made with mid to large business needs in mind. It comes in a range from 2 TB up to 18 TB and supports up to twenty-four bays. When time is money, you want all your workforce to be able to access and use the resources they need right when they need them. WD Red Pro NAS HDDs allow for quick consistent access, and offers extra protection against vibration and write errors. Pair that with an extended five-year limited warranty, and the WD Red Pro 2 TB NAS Drive offers reliability that you can take to the bank. 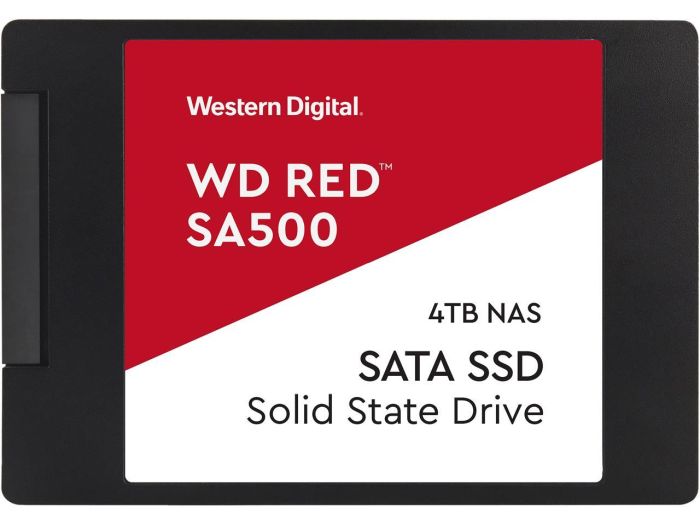 What if you need to take your existing NAS system to the next level? If you regularly need quick access to large files, use demanding applications, or edit video in 4k resolution or higher, adding a WD Red SA500 SATA SSD can give you the extra power and speed to get the job done. Available in 2.5” and M.2 form factors, with capacities ranging from 500 GB to 4 TB, these purpose-built NAS SSDs are much tougher than their desktop counterparts, and can optimize your system for better, more efficient performance. Adding the versatile WD Red SA500 1 TB SSD to your NAS system allows you to leverage the greater speed of SSDs while still enjoying the greater storage capacity offered by HDDs.