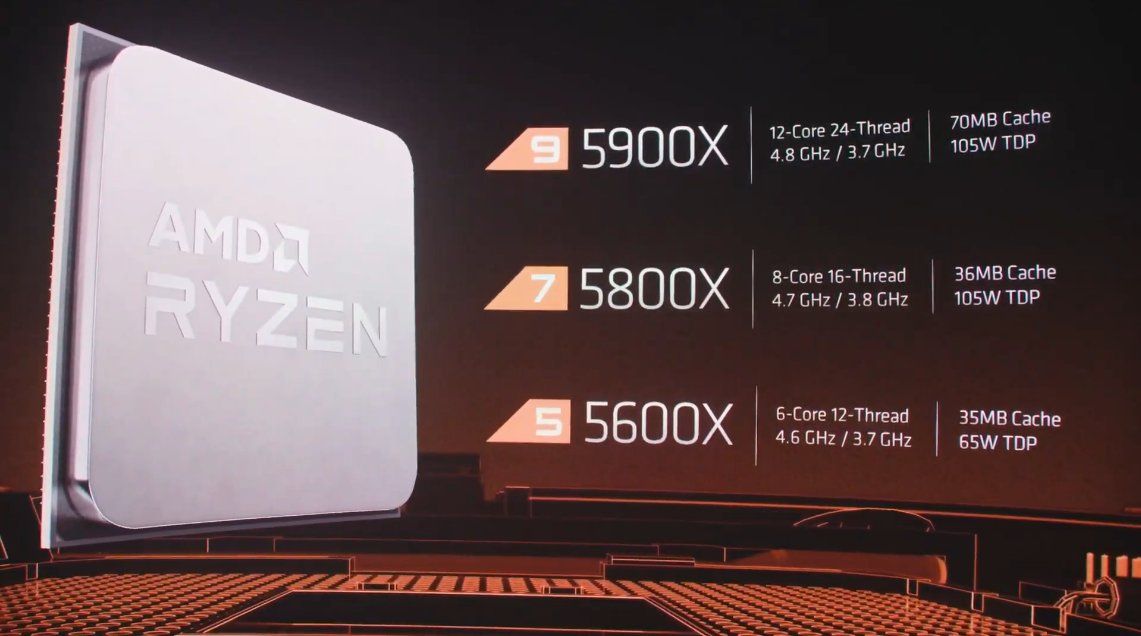 Today, AMD announced its new Ryzen 5000 Series CPUs in a live launch event. CEO Lisa Su and her team walked us through several product reveals; here’s the lowdown on the latest offering from AMD that includes four new chips designed with gamers and content producers in mind.

Ryzen 5000 Series chips are the first processors built with the AMD’s new Zen 3 architecture. The company says Zen 3 represents the largest generation-over-generation performance increase for AMD’s desktop processors so far. AMD CTO Mark Papermaster dug into the details: the new architecture that features a reworked core complex that allows every core direct access to the chip’s L3 cache. This reduces latency in gaming, as the cores no longer need to traverse the entire die to access the cache.

The new 5000 series CPUs use a 7 nm process. The 5 nm “Zen 4” process is still on the horizon for AMD chips. The redesigned chip layout that has yielded some nice gains, specifically a 19% lift in instructions per cycle over the previous generation, and a higher max boost speed.

Throwing modesty to the wind, AMD is touting the Ryzen 9 5900X as “the world’s best gaming CPU,” and this chip definitely makes a strong case. A 12-core/24-thread chip with a 4.8Ghz boost speed, the 5900X, according the the presentation, is capable of double digit frame rate increases over the previous generation — an average of 26% faster gaming on average at 1080p resolutions. 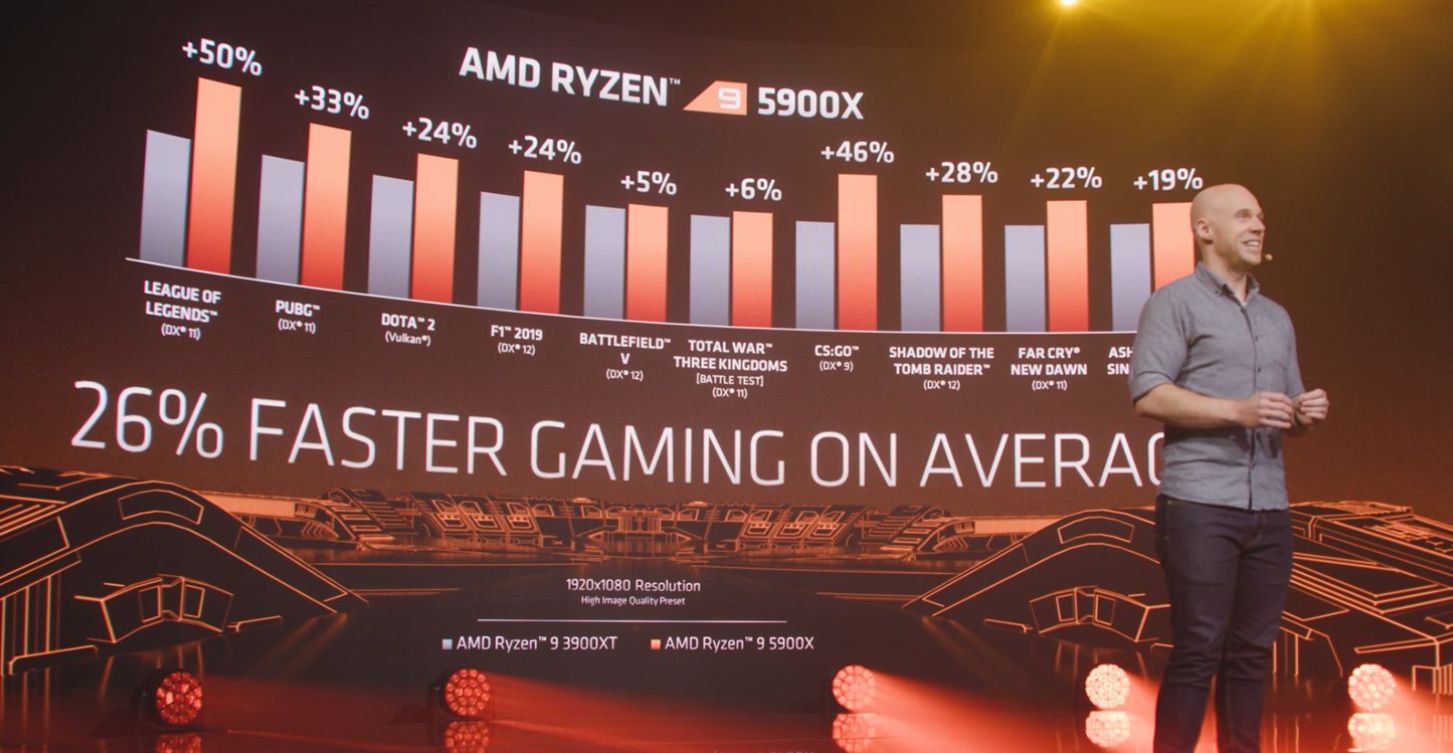 It’s always prudent to wait for industry benchmarks to confirm those of the manufacturer, but there’s plenty to be excited about right now: according to AMD, the 5900X is first desktop processor to break a 600-score in the Cinebench R20 1T benchmark, registering an astonishing 631 score.

Are you upgrading to @AMDRyzen 5000? Comment the CPU you’ll be replacing. For gaming and/or creating?
Release date 11/5

Perhaps the most exciting news of the day came at the end of the launch event: the Ryzen 5950X, a 16-core workhorse designed for content creators and engineers. The 5950X has a 4.9Ghz boost speed and packs 72MB of L2 and L3 cache. It works hard and plays even harder, scoring a 640 on the Cinebench R20 1T.

In production applications, the 5950X showed stout improvements in AMD’s internal benchmarking: a 5% lift in video editing on Adobe Premier Pro; up 27% in CAD performance using SolidWorks 2019; a 9% improvement GCC Compile Time, and a 12% boost in raytracing in V-Ray 4.10.

The new Ryzen 9 5000 chips offer a ton of excitement, but AMD isn’t done yet — it teased its new “Big Navi” Radeon RX 6000 series GPUs which are to be unveiled at a later date. 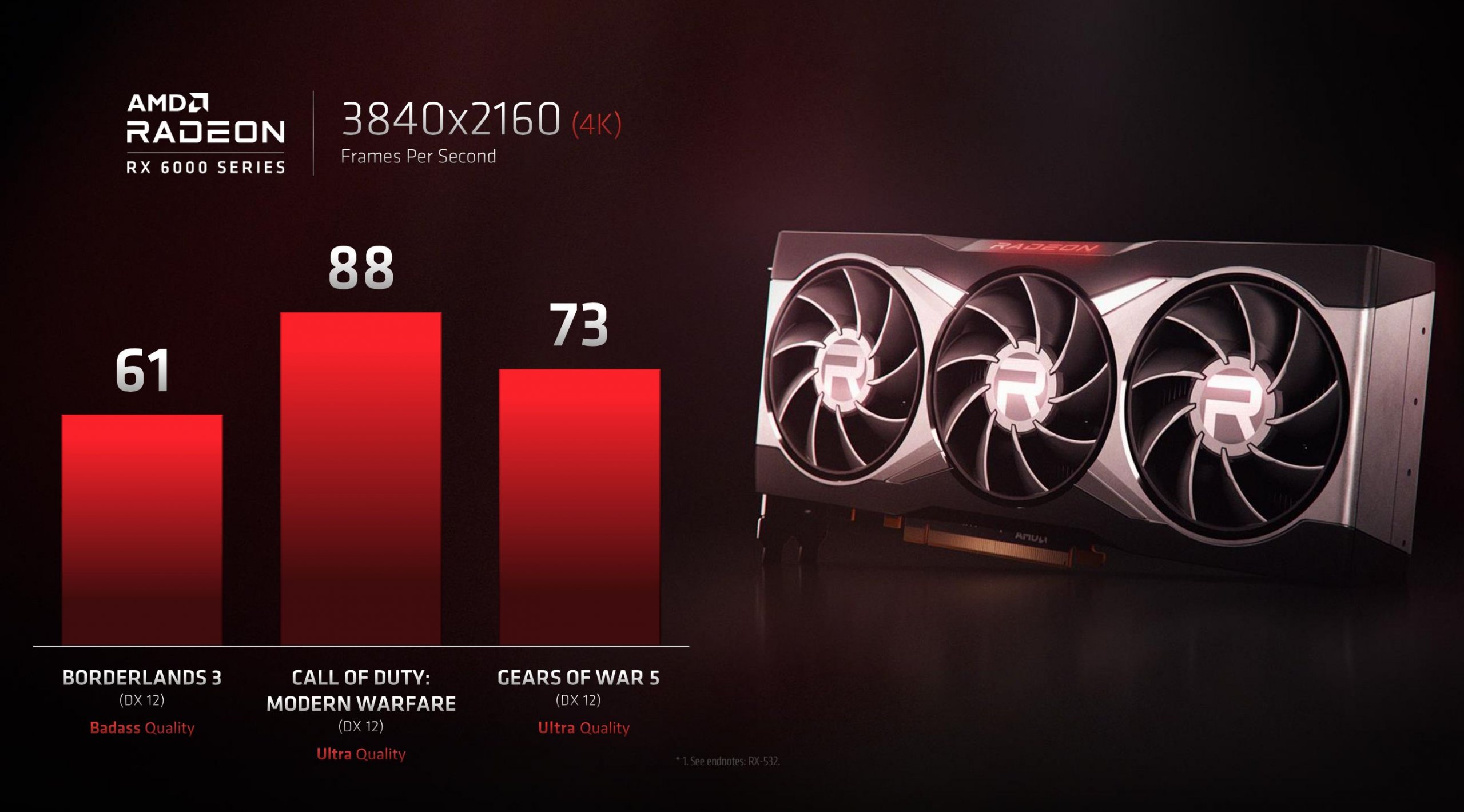 Want more info on the AMD launch? Check out AMD’s recap of the launch event, or watch in its entirety here.