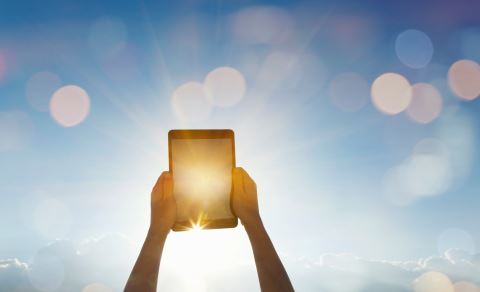 I’m sure many of our Newegg friends and family are keeping up with the Consumer Electronics Show in Las Vegas this week. We are seeing tons of great technology roll out from well-known manufacturers and brand new start-ups alike. Wearable tech, home automation, audio and video systems, robotics – not to mention food printers and Lamborghinis – and so much more that’s featured at CES, advance the industry and boggle our minds. It’s really hard to pick from the hundreds of examples at the show, but new wireless charging technology pushes the envelope this year in a way that may subtly change our everyday environment like little else can.

What’s so exciting about wireless charging? Well, Energous Corporation (en-ER-juss) wants you to know that power cables for your mobile devices – and many non-mobile ones, for that matter – may soon go away, like your old phone and data cables. 2014 saw some exciting steps forward in this area, with examples like QI chargers and Duracell wireless charging cases, for example. But imagine your smartphones, tablets, game

controllers, wireless mouse, smartwatch, and even home appliances, charging automatically and without being plugged in. WattUp will do just that. Continual use of these things will be the norm, as low-battery fears won’t shackle you to a wall socket or USB port for an hour or more at a time. For devices requiring 10 Watts or less, you’ll see charge up times nearly equivalent to cable- or USB-charging, and perhaps at distances further away from a wall-socket than wires go – and safely, too.

It works the same way your wireless router does – hardware to send radio frequency (RF) signals through the air, and hardware to receive them and turn them into energy. From the website:

Mobile devices and other electronic equipment will need to be manufactured with such receivers, but once that happens – and it should be easy enough and cheap enough – you’re good to go. And keep on going. With these in your house, simply walking in your front door with your smartphone is enough to signal the transmitter, via Bluetooth, to start the charging process. And with Energous’ iPad app, you can prioritize, schedule, and protect which devices get charged and when. Charge your game controllers while you’re out and your tablet when you get home. Charge other wireless devices while you sleep and nothing at all when you’re away. The app can be set to charge all devices within its 30-foot range, or none at all according to your settings.

Not as flashy or sexy as the Torino Lamborghini, I know, but tech like this moves rapidly, and charging the mobile devices we can’t live without may soon mimic connecting to the Internet, which most of us can’t live without, either. Radio waves carrying information fill the air all around us; adding (safe) power to that will change the way our devices integrate into our lives. Like a car that no longer needs to stop at a gas station, your device won’t stop your routines. I can’t say when it will be available, but be sure that we will keep our eyes and ears open at Newegg for the first moment we can get it to you.

Do you believe this a revolutionary concept? Share your thoughts in the comments.