By Craig NiemanAugust 26, 2019No Comments 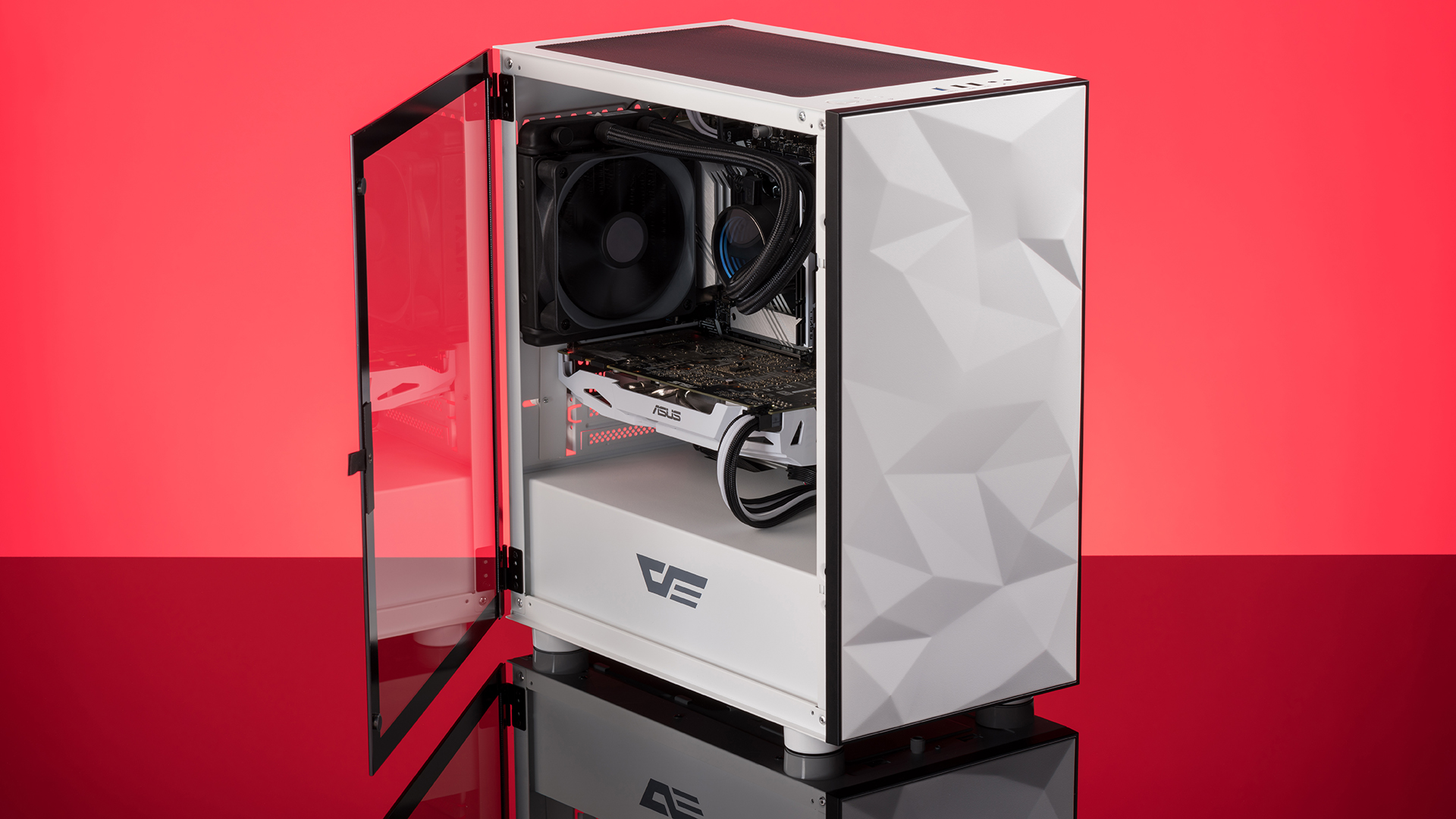 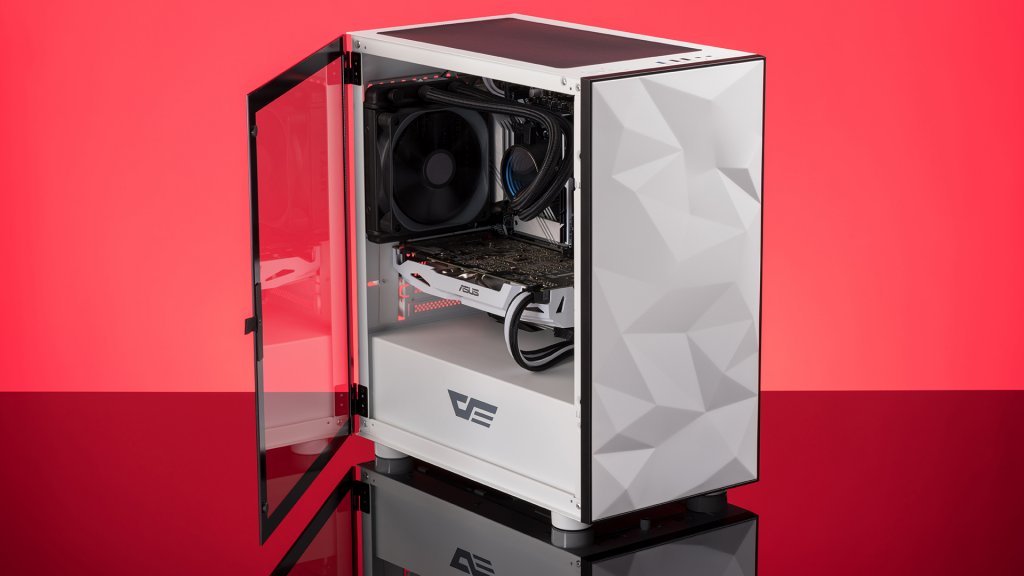 darkFlash is developing quite the positive reputation around the Newegg offices. We’ve put together a bevy of builds using their components over the past year, each one impressing us with their feature set and price-to-performance ratio. This is all to say that when darkFlash’s beautiful DLM 21 micro-ATX Case showed up in our offices, we rushed to check it out. Did it live up to the high bar set by the other darkFlash products we’ve tested out? (Spoiler alert: it did, but read the rest of the article anyway. Or at least scroll for more shots of this glorious black and white rig). We’ll also highlight darkFlash’s CF8 Pro fans, which we regretfully didn’t have a chance to test out, but that we feel deserve your attention.

Gaming in the Lap of Luxury with the darkFlash DLM 21 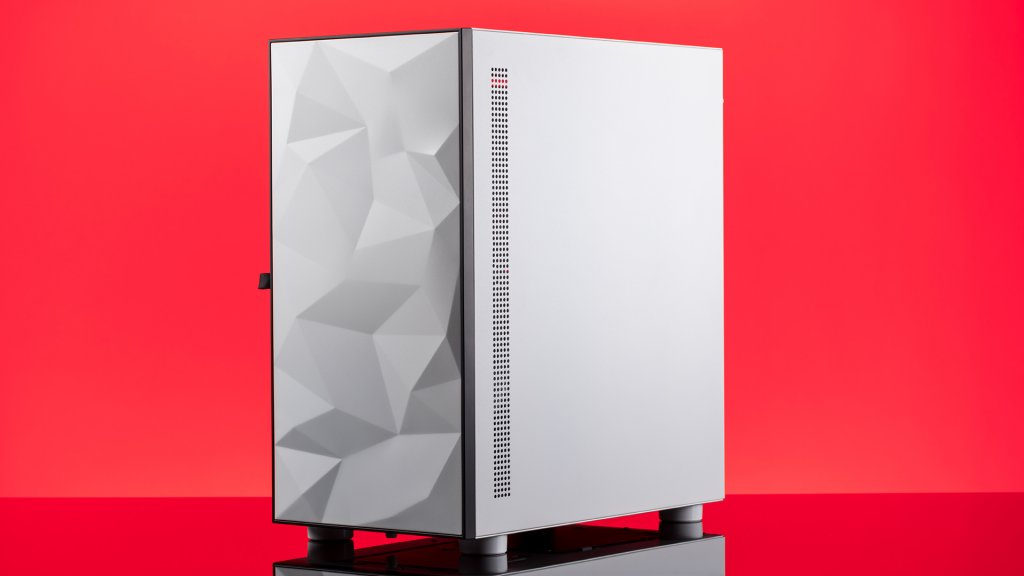 darkFlash’s DLM 21 is branded as a “luxury” gaming case, and when you see it in person that definitely comes across. Painted in a tasteful black and white color scheme (though an all-black model is also available), the case eschews the common “gamer” aesthetic in favor of something more simple and refined.  From its sleek body to the understated polygonal design etched on the front panel, the DLM 21’s aesthetic calls to mind a sort of restrained power, like a martial artist whose calm demeanor masks the torrent of strength ready to be unleashed at a moment’s notice.

Speaking of power, darkFlash makes it easy to add a little more to your DLM 21 build, thanks to the hinged door design of its tempered glass side panel. The right side of the panel is firmly attached by magnets, but can be easily opened via a small handle. The magnetic connection between the panel and case is strong; the panel never felt like it was coming loose while we worked on our build or picked up and moved the case around.

It’s not just the side panel that’s sturdy; the DLM 21’s build quality is stellar across the board, doing little to betray its low asking price. Constructed of 0.6mm SPCC steel, the chassis feels robust, like it can take a fair share of punishment if you’re the type that clangs around while installing parts inside your rig like some sort of twisted surgeon. 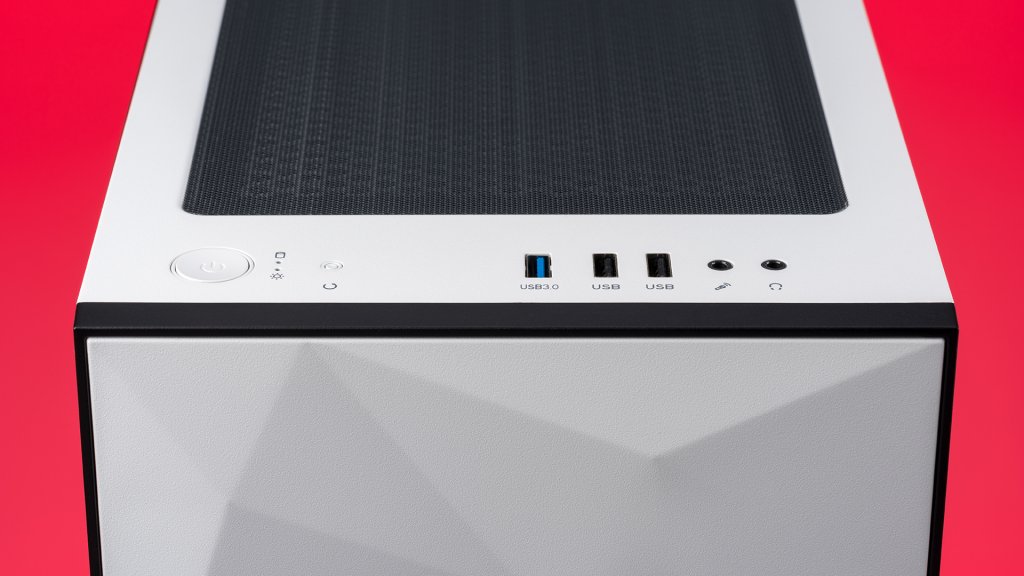 At the top of the case are the power and reset buttons, along with a fairly standard front I/O array: a single USB 3.0 port, two USB 2.0 ports, headphone jack, and microphone jack. Behind the I/O array is a large dust filter to keep unwanted particles out of your gaming rig. The filter is black on both color variations of the DLM 21, but in our opinion it accents the white case quite nicely.

Of course, a rugged body doesn’t mean much in a PC case if it isn’t backed by solid ventilation, and luckily the DLM 21 has that in spades. An air inlet runs down the right side of the case, adding a healthy bit of airflow, and for optimal thermal performance, up to five case fans can be installed on the DLM 21: two 120mms on the front; one 120mm on the rear; and the space for two 120mms, two 140mms, or a single 240mm liquid cooling radiator at the top. 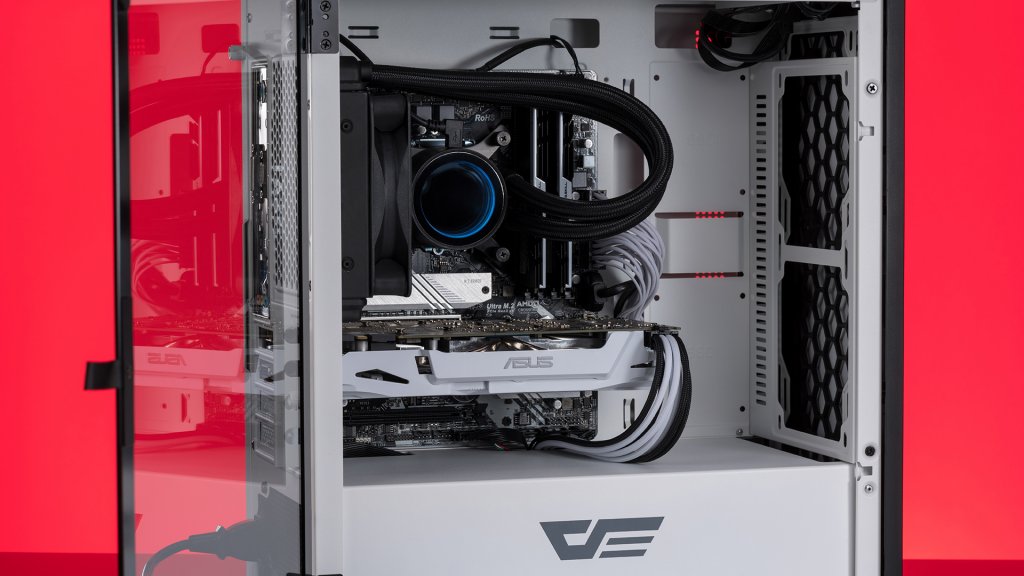 As a micro-ATX case, the DLM 21 may be smaller than your average beastly gaming case, but there’s still plenty of room within for quality components. Inside is enough space for a maximum PSU length of 210mm, a CPU cooler as large as 160mm, and enough space to accommodate a large GPU, including high-powered RTX and Radeon VII cards. It goes without saying that a micro-ATX board is the perfect fit — for our build, we used an ASRock B365M Pro4, an excellent board for builders on a budget who want to tap into the power of 8th and 9th gen Intel CPUs (we used an Intel Core i5-9600K). By pure happy coincidence, the ASRock mobo matched the black-and-white aesthetic of the DLM 21, establishing a color scheme we would use in the rest of the build.

With a clear build aesthetic in place, we added an ASUS GTX 1060 for our GPU, a reliable performer for 1080p gaming that also meshed with our color scheme. Another standout of the build is the 16GB of G-SKILL TridentZ RAM we slotted in for its strong performance and black-and-white coloring. We used an EVGA SuperNOVA 1000 G3 as our power supply, which at 1000W was a bit of overkill for our build — but who says a little headroom ever hurt anyone? In this case, the aesthetics of the PSU didn’t matter, as the DLM 21 entirely conceals it and the HDD bays, making them only visible by opening up the panel on the right side of the chassis. 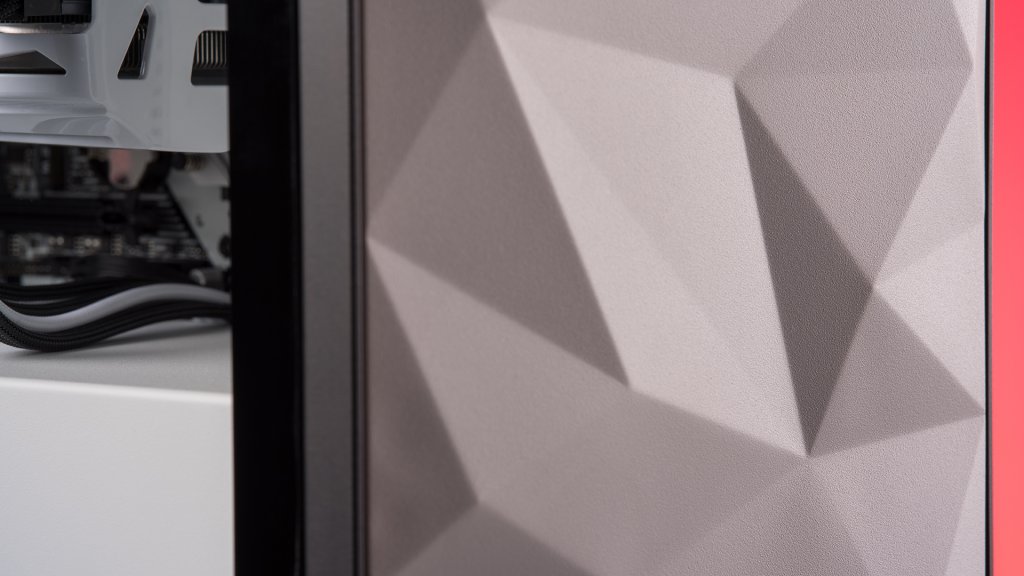 If you’re going to load up on performance components, you’re going to need a good solution for managing all the cables that come with it, especially for a smaller case like the DLM 21. Well, darkFlash has you covered there too, with plenty of compartments to run cables through. Cable concealment was a snap for our build, with the easily removable right panel making it simple to route our cords to and fro.

All told, putting together our build took far less time than we expected. We spent more time looking for parts than we did actually installing them. The DLM 21 may be a small case, but it’s more spacious and easier to work with than it appears. All the components we used were installed without any sort of muss or fuss, better than many other micro-ATX cases we’ve worked with. 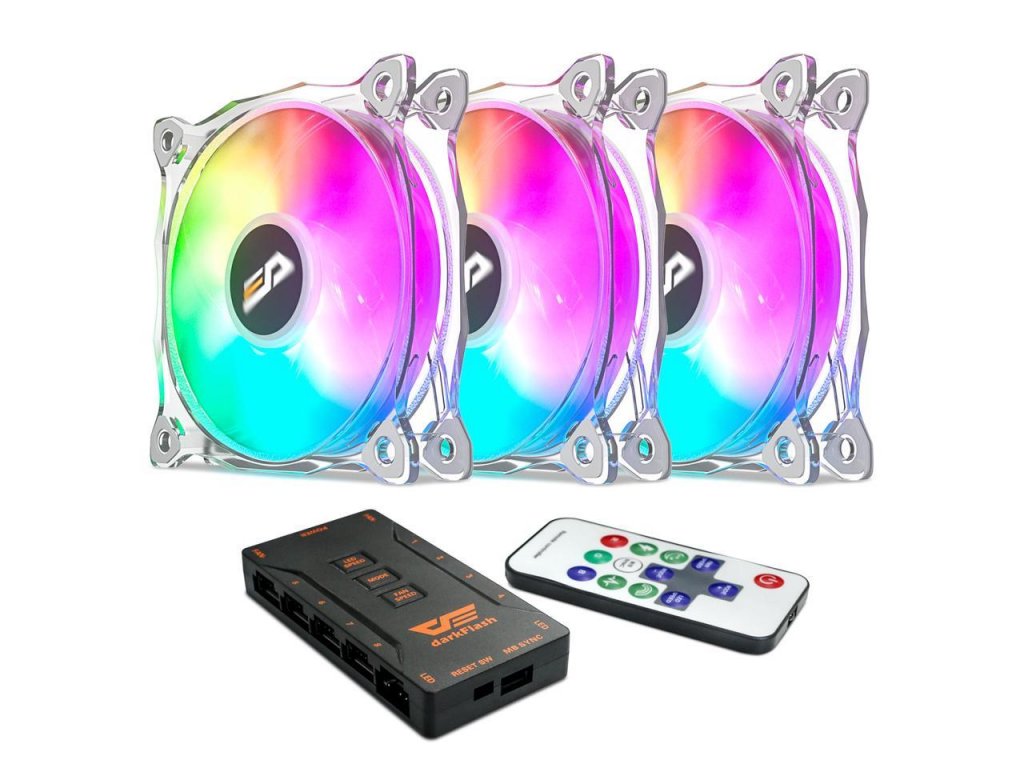 If you want to add a little extra darkFlash goodness to your rig, it’s worth checking out some of their CF8 Pro 120mm cooling fans. Featuring a cool transparent design, the CF8s blend in perfectly with the minimalist veneer of the DLM 21. The case’s tempered glass side panel also perfectly accentuates the RGB illumination of the fans, as their lights beautifully refract through the glass.

darkFlash gives you plenty of ways to control the CF8s to your liking, The included remote offers options like LED and fan speed control as well as lighting mode toggles. There are plenty of lighting modes to choose from too: darkFlash quotes a total of 47 effects that can be selected through the remote. If you’re already invested in an RGB ecosystem like ASUS AuraSync, then you can integrate the CF8s through their 5V addressable header.

There’s more to the CF8s than just colorful brilliance. The fan blades are constructed with special shockproof rubber to minimize noise. That bit of noise reduction comes in handy when you consider that the fans reach speeds upwards of 1100 RPM, delivering quiet and efficient cooling for rigs of all performance levels. 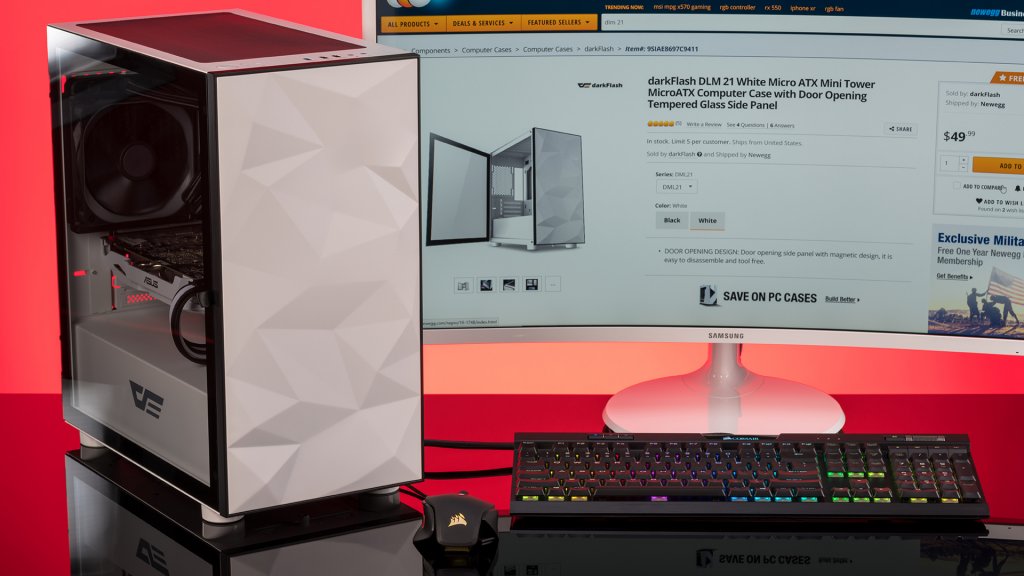 darkFlash’s DLM 21 made for another strong showing from the upstart component manufacturer. If you’re looking into crafting a small, low-profile build that would permit a micro-ATX case, then the DLM 21 gets a high recommendation for its neat aesthetics, compact size, and high build quality. Mix that with the high-performance cooling of the gorgeous CF8 Pro fans, and you have the makings of gaming greatness.