DJI is a brand synonymous with pushing the limits of what is possible with compact camera systems. From shake-reducing camera stabilizers to an extensive line of drones they have become a one stop shop for anyone looking for the tools to carve out the ultimate shot with a wide range of tools able to meet most project’s demands.

With the release of their latest action camera, the Osmo Action, capable of 4k at 60 fps, 8x slow-motion, and in-camera motion smoothing, DJI have proven that good things do come in small packages.

A good choice for both experts and novices 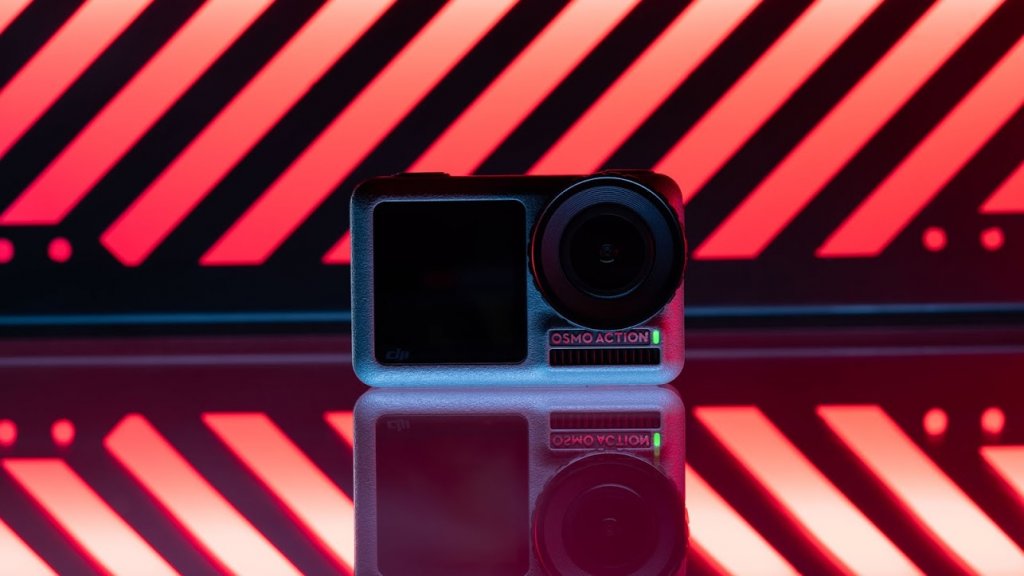 Action cameras are certainly nothing new. Since the early 2000s when brands like GoPro first came onto the scene, their popularity have waxed and waned each year with the advent of new technologies allowing for smaller form factors, better battery life, and most importantly better picture quality. These factors are undeniably what sets each generation of camera apart and determines their effective life spans.

The latest in a long line of ever-improving action cameras, the Osmo Action is the culmination of years of great ideas finding their home in one convenient and familiar form-factor.

The most exciting development in this new release is a system designed to put nearly 100% user-controllability in the hands of the shooter. Past generations of various action cameras have each been found wanting in separate regards

Past generations of various action cameras have each had areas where they excelled and created a new standard of quality but ultimately had inevitable issues that all stem from fast turnaround in a competitive market. From difficult to navigate control systems, one-button processes that only represent a few options in a wide range of variables, overheating, as well as inconsistent naming conventions for otherwise standard operations.

The Osmo Action feels like the result of all these efforts culminating into a product made by an expert shooter for other experts. but still allowing for the accessibility of the novice shooter. 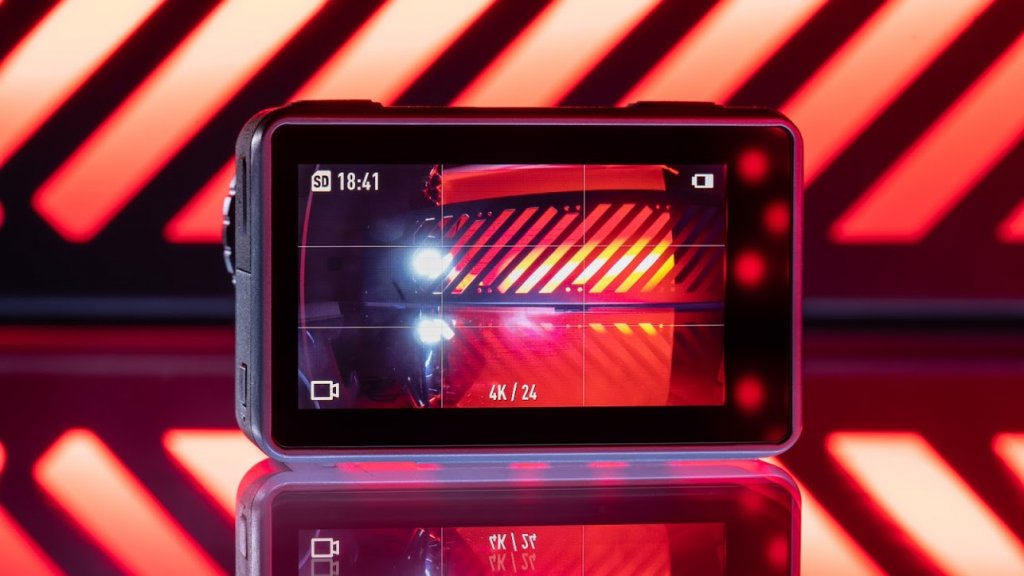 A huge way DJI has made shooting and navigating various menus more natural for users of all skill levels is by finding a balance between efficiency and intuitiveness. After powering the camera on you simply swipe left, down, or up on the rear touch screen to be immediately dropped into easily navigable and function-specific menus that will give you as much or as little control over the camera as you could want.

By swiping up we’re able to set the picture ratio between either 4:3 or 16:9. Most picture formats these days come with 16:9 as the default, but creating quick content framed for outlet-specific social media is a nice touch that takes some of the guesswork out of the shooting.

In this same menu DJI tries to make life even easier for influencers and performers on the go, or someone needing the assistance of a countdown, which ranges from 1 – 10 seconds. That’s a nice bit of flexibility to have if you’re setting the camera up and need a little wiggle-room to prepare before you start capturing.

Swiping back up and then left reveals further options that live on the right side of the screen. In this menu two easily recognizable icons, that of an aperture or iris and another, that of a camera body. The iris icon reveals a simple menu containing options you might expect to be associated with a camera aperture such as the means to adjust lens-specific controls i.e. shutter and ISO. The camera body icon gives us the ability to affect the camera’s white balance, either set to auto-white balance or adjustable by light temperature displayed in Kelvin.

For the layman, auto white balance is likely the easiest and best way to proceed but a cursory web search explains the difference between temperatures and what results to expect. This deviation in WB control alone is worthy of praise and an excellent departure from previous white-balance menus that only allow for a few presets that don’t always account for variable lighting conditions.

Having the means to really dial in your white balance to this degree of specificity is something far more common with a professional video system and if done properly really delivers exceptional and true color values in your final output. 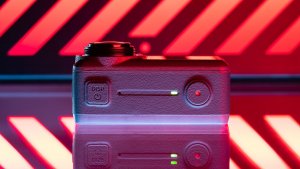 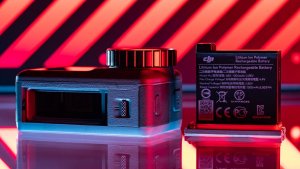 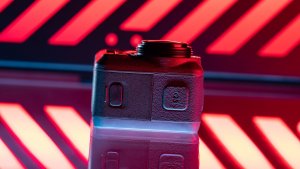 One of two other surprising options in this menu allow for the user to adjust photo formats from JPEG to JPEG + RAW, admittedly a streamlined approach without needing to consider each megapixel in your photo. A fairly new consideration allows greater ease of operating with super wide lenses, a common feature of most of these camera-types, is the means to dewarp your image in-camera.

This is undeniably a nice step forward for shooters, removing the burden of waiting until after photography is wrapped to correct that pesky distortion. Knowing how a picture or video is going to look prior to editing it is a huge time saver and seems to be one of the most consistent considerations in the design of the Osmo Action. 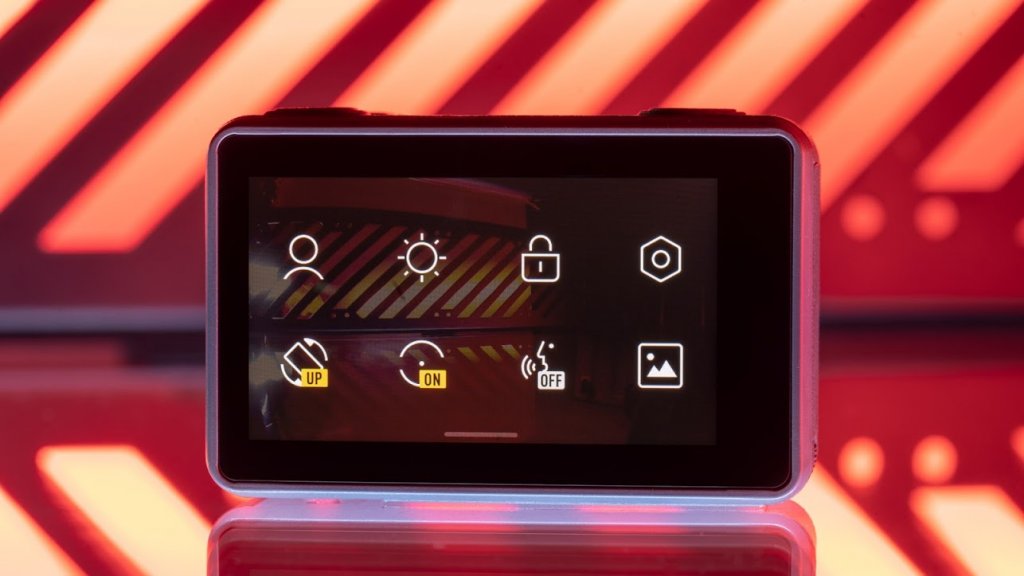 The final menu is hidden at the top and quickly revealed by swiping down. A more specific range of options are hidden up top and it is here that frequent action camera users will find the biggest and most welcome surprises. Chief among them: Auto Rotate, Touch-Based Spot Metering, Voice Controls (English and Chinese Only for now), HDR (not available when Rocksteady is active), Wind Noise Reduction, Full Front Screen On / Off, Quick Switch customization, Face-Oriented Exposure, Rule of Thirds Grid, and more common staples found in any common camera menu such as Formatting, Factory Reset, and Power options.

Designed for Ease of Mind 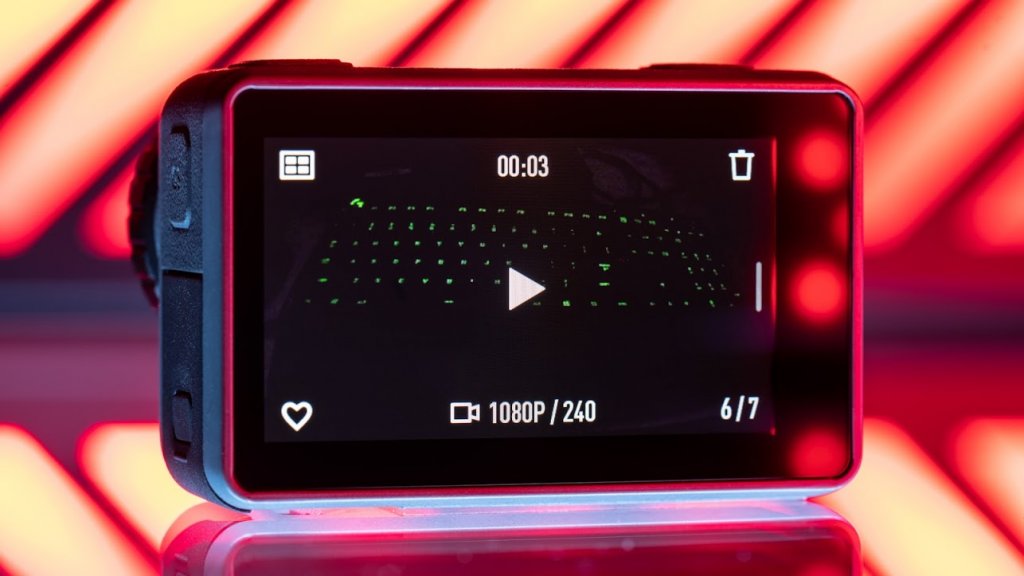 The Quick Switch or QS button is found on the left side of the camera body. This button responds with a minor amount of pressure to cycle presets including: Video, Slow Motion, Time-lapse, Hyperlapse, HDR Video, Photo, Burst, AEB, and Timed.  Rather than requiring shooters to cycle through all of these options in order to make a quick change the Osmo Action makes it possible to choose just which of these capture formats the Quick Switch window will feature every time you need specific formats mapped to this button.

Apart from the touchscreen on the back, the camera has three well-spaced and easily recognized physical buttons which can be quickly distinguished by touch alone. An easy to distinguish big red button for capturing, a power button, and the previously mentioned QS button which allows users to do more than just switch between functions at a gentle squeeze but pressing this button for longer than 2 seconds activates the front screen which truly sets this camera apart.

Here’s looking at you

After holding the Quick Switch button down the Osmo Action’s front screen will activate with the brief sound of a chirp and whoosh. Turning the camera’s lens to face a user allows shooters to see themselves, allowing for easily framed self-portraits or documenting all a user’s spine-tingling adventures. Even with the touchscreen facing away, DJI still allows users, with a gentle pressing of the Quick Switch button, to cycle between established capture modes which is the only menu control a user will have in this mode apart from recording on top of the camera.

This is one of those design choices that seems so obvious users might wonder why no other manufacturers have put it into practice before now. Taking all the guess work out of a user’s self-framing is reason enough for most action camera shoppers to want to pick up an Osmo Action.

Connect with a tap

Yet another way DJI has changed the game is with the Osmo Action’s accompanying software, DJI Mimo. With a few simple touches the app communicates with the camera and allows for full operation remotely and even makes updating the camera’s firmware a breeze using your phone’s data or Wi-Fi.

Considering the complications that arise from pairing or linking some cameras with phones this is a nice change of pace since the device does the work for you.

Rocksteady for a shaky world 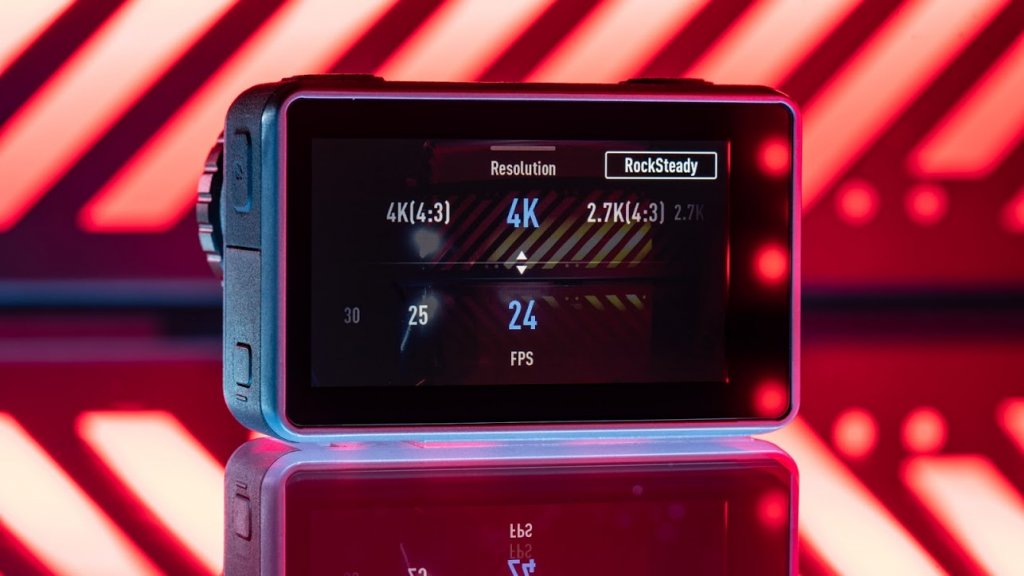 DJI’s Rocksteady software adds a slight delay to your video but much like this camera, it’s worth the wait. Rocksteady takes that time to discreetly scrub your footage of minor wiggles and shake as you shoot which, as previously stated, allows shooters to see what they’re getting before they edit.

It’s worth pointing out that shooters aren’t going to find any other camera this size that packs this much punch in so many ways. Despite having over a decade of action cameras it’s nice to know that they can still provide a happy surprise.

And that’s a wrap…

The Osmo Action is a camera whose designers took a step back and built on the success of previous action cameras while putting the user’s ease of use at the forefront of their considerations. While it might be early to call this new camera the “GoPro killer,” it certainly gives the GoPro team a run for their money.

Available for $349 right now at Newegg.com, be sure to get your hands on what is sure to be one of the biggest game changers in the world of photo and video for 2019.