HTC kicked off CES 2019 with the reveal of the VIVE Cosmos and the HTC VIVE Pro Eye; two headsets designed to shape the next generation of virtual reality.

The VIVE Cosmos appears to be HTC’s version of a wireless, standalone headset similar to the Oculus Quest, while the HTC VIVE Pro Eye is a variant on the HTC VIVE Pro that includes built-in Tobii Eye Tracking support.

Specific details are not yet available, but the VIVE Cosmos appears to be a hybrid standalone VR headset similar to the Oculus Quest. It uses inside out 6DoF tracking rather than a network of external lighthouse sensors to track your position in a virtual space.

The VIVE Cosmos also comes with a new set of controllers, as well as the ability to easily flip up your headset to check on things in the real world. It also utilizes what HTC calls their “sharpest screens yet”, and a focus on ease of setup when compared to earlier VR headsets.

It sounds like the VIVE Cosmos is meant to be a bridge between mobile VR and a traditional PC based HMD like the HTC VIVE or the Oculus Rift. HTC seems to have designed the VIVE Cosmos to function with a PC, and with a compatible smartphone, potentially catering to every level of the VR spectrum.

The reveal trailer shows the VIVE Cosmos paired with a smartphone. This could mean that the new headset allows you to connect to a mobile device that has enough raw horsepower to render scaled down VR experiences.

We have our fingers crossed that the VIVE Cosmos can do both. The idea of a headset that can easily transition between high quality PC VR experiences and lighter, mobile friendly VR could change things in a big way. The official VIVE Cosmos website has a section devoted to future proofing your VR with modular customization. This might imply a scalable VR experience, depending on the tech you’re willing invest in.

HTC isn’t saying much about the VIVE Cosmos’ full functionality and MRSP yet, but we will keep you posted as we learn more. 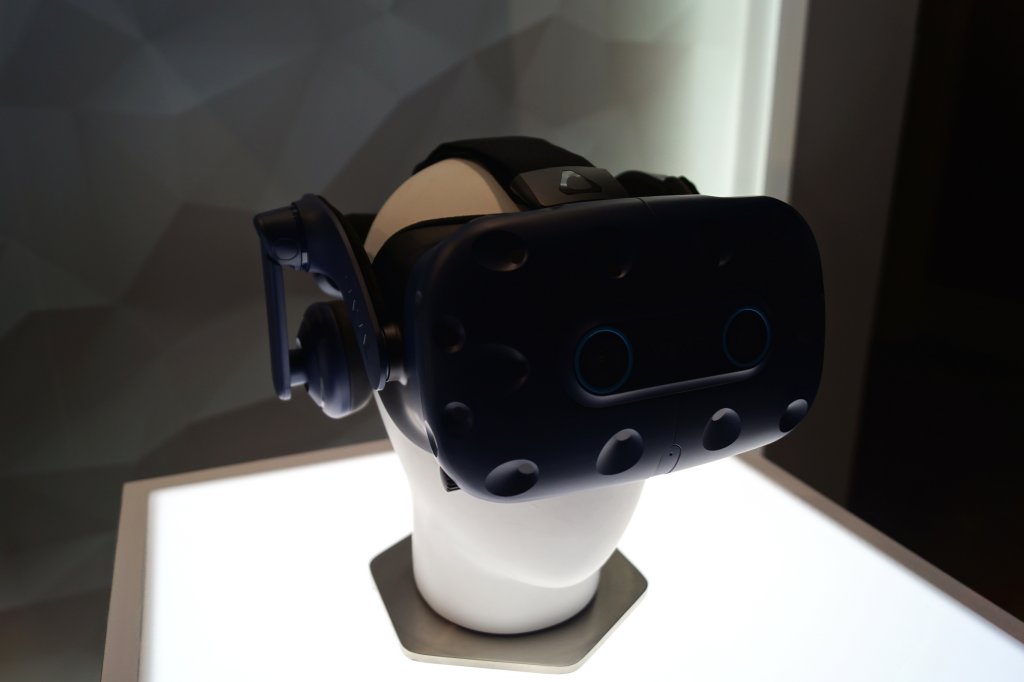 The VIVE Pro Eye is marketed as an enterprise level headset, similar to the base HTC VIVE Pro, but with a specialized Tobii Eye Tracking sensor that allows the VIVE Pro Eye to detect where you’re looking on screen. Tobii eye tracking is already a nifty bit of tech, but when it comes to VR, it’s a particularly interesting glimpse into the future.

Eye tracking is a big deal, because of Dynamic Foveated Rendering.

DFR is a graphical sleight of hand that involves rendering scenes that the player isn’t looking at using a lower quality setting, while highlighting the quality of the areas that a user is actively engaging with. Because the HTC VIVE Pro Eye can “see” where you’re looking, it allows a VR application to use Dynamic Foveated Rendering to increase the quality of textures based on your gaze.  Essentially, what you’re looking at gets the full GPU treatment, while the rest renders in the background.

We’re looking forward to pricing information on both of these headsets, and will keep you posted as we get new info.

I'm a writer from the dusty hills of Hermiston Oregon. I love a challenge and anything that pushes me past my limits both intellectually and physically. To that end you'll usually find me with my head stuck in a book or a PC build, or practicing some kind of Martial Art.