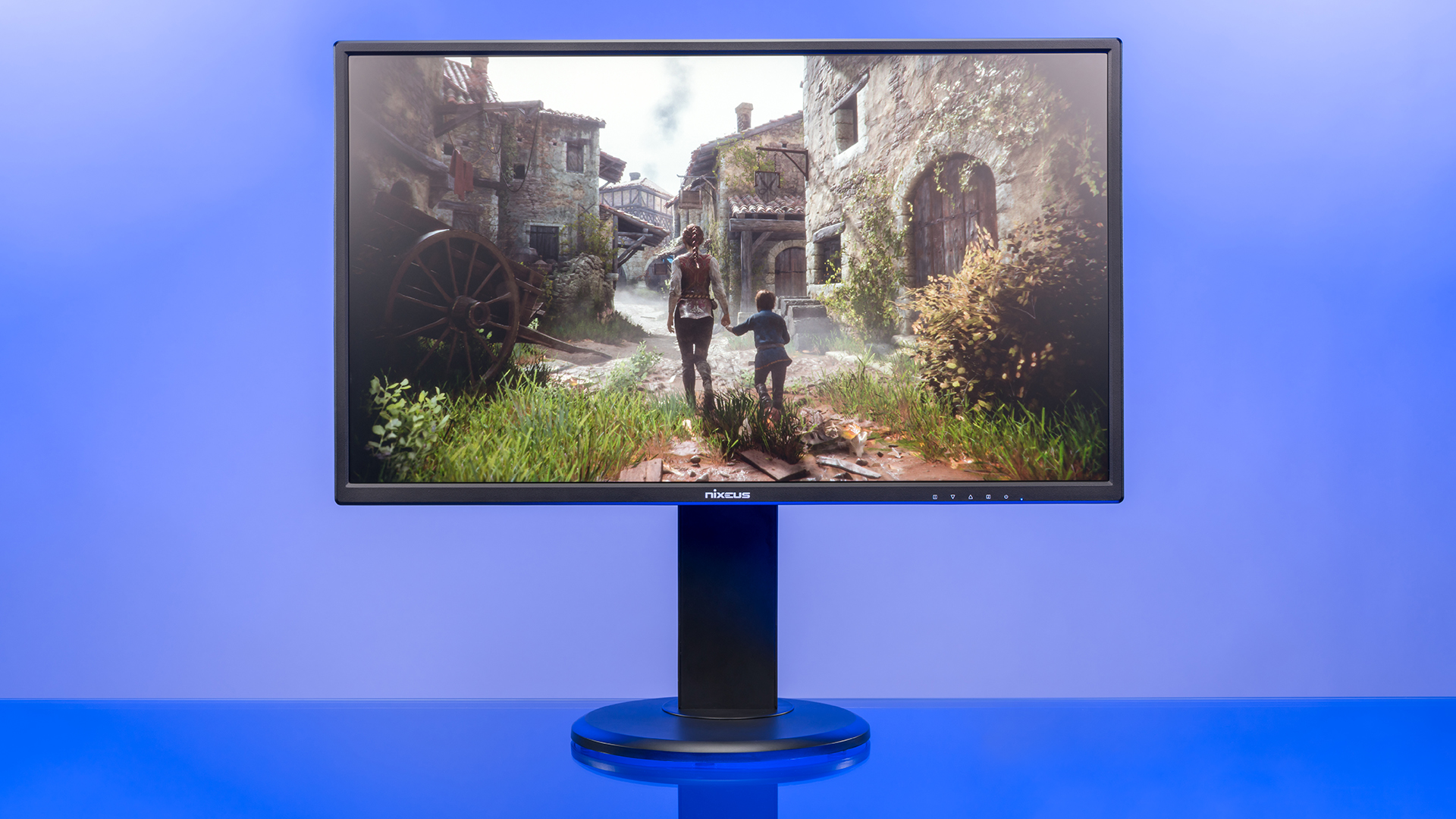 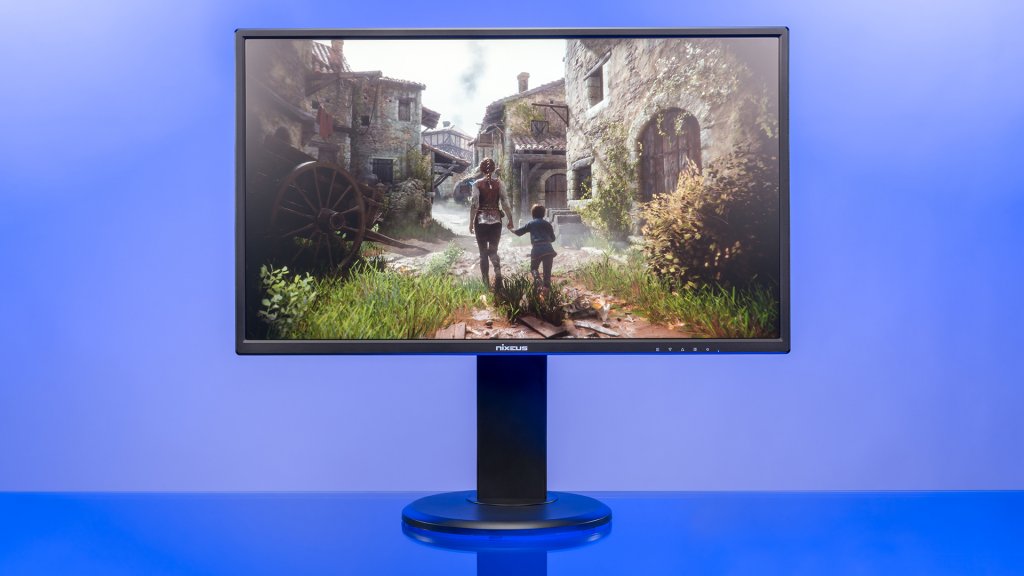 Once you’ve gamed on a FreeSync monitor, it’s tough to go back to a screen with a fixed refresh rate. That goes double if said FreeSync monitor also runs as high as 144Hz and at a resolution of 2560×1440. The only problem is that harnessing this trifecta of gaming performance can be quite a costly proposition, especially if you want a monitor with a wide FreeSync range and an IPS panel.

That makes what cult-favorite PC gaming brand Nixeus has pulled off with their new gaming monitor, the NX-EDG27 v2, nothing short of a miracle. Although many other monitors in its price range can boast one or two of the features gamers demand, nothing pulls it all together like the EDG27 v2. It’s hard to talk about Nixeus’ new display without discussing the value, but doing so almost feels like a disservice, because it’s so much more than one of the best so-called “value” FreeSync monitors; the EDG27 v2 stands among some of the best gaming monitors around.

What is FreeSync and why would I want it?

If you’re a PC gaming whiz and know your way around variable refresh technologies, feel free to skip this section. For everyone else, if you want to know why the Nixeus NX-EDG27 v2  is such a big deal, then you first need to understand what AMD FreeSync is and how it works.

Most standard computer monitors run at a refresh rate of 60Hz, meaning the image on-screen is updated 60 times per second. When gaming, your GPU renders images at a specific framerate, the measure of how many images are rendered by the GPU per second, expressed in frames per second (fps). Trouble can arise when your GPU renders at a framerate that isn’t identical to the monitor’s refresh rate, or at a framerate that isn’t an even factor or multiple of the refresh rate (e.g. not rendering at 30fps, 60fps, 120fps, etc. with a 60Hz monitor).

When your monitor and GPU are trying to produce images at different speeds, this results in a visual artifact known as screen tearing, in which the monitor, unable to keep up with the images being sent by the GPU, produces an image made up of multiple frames simultaneously. The outcome is an image that looks like it’s literally been split or torn at the seams, hence the term “tearing.” For context, take a look at the following Far Cry 5 screenshot comparison from this AMD-produced video explaining the benefits of FreeSync. 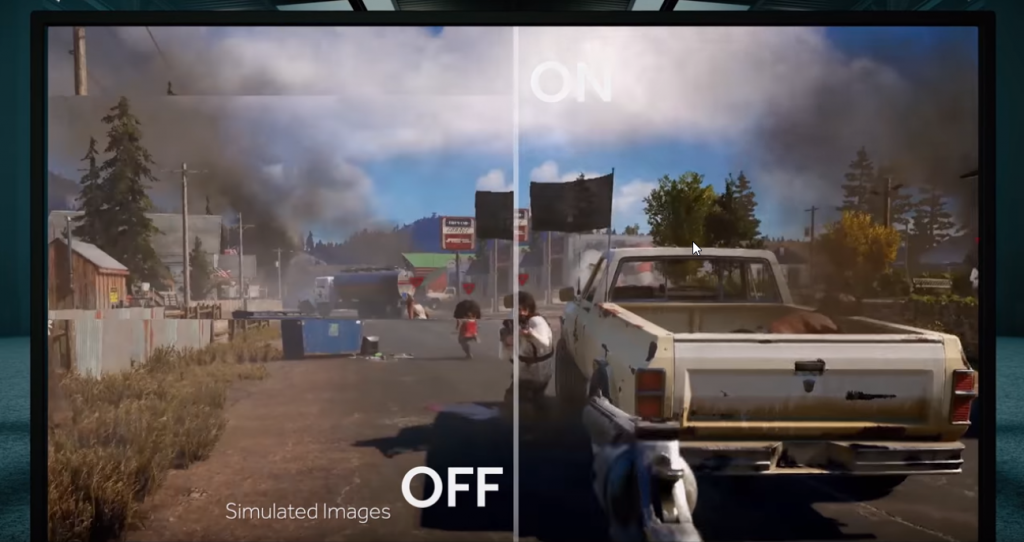 Notice how the top of the telephone pole and pine tree in the upper left are torn off from the rest of the image? That’s screen tearing in action — the image on-screen is failing to stay in sync with the frames being rendered by the GPU, resulting in the screen displaying visuals from a different frame in the upper section of the image.

Traditionally, games combat this problem with a technology called V-sync (short for Vertical-sync), a software technique that makes a GPU wait to render a frame until the monitor is ready, thus minimizing or outright eliminating tearing. While V-sync provides a better, more stable image, it comes with the unfortunate side effect of stuttering performance when a game’s framerate dips below the monitor’s refresh rate. It can also introduce a bit of input lag too, which can be the difference between life and death in many games.

That’s where FreeSync comes in. FreeSync is a technology created by AMD and leveraged on a standard called Adaptive-Sync that allows monitors to run at a dynamic refresh rate, keeping the monitor’s refresh rate synchronized with the framerate of the graphics output by the GPU. This technique minimizes input lag and can all but eliminate screen tearing and stuttering performance.

Until recently, you needed an AMD Radeon GPU to take advantage of FreeSync, while Nvidia users were tied to the manufacturer’s G-Sync technology. However, Nvidia recently expanded support for the technology to its GeForce RTX 20-Series, GTX 16-Series, and GTX 10-Series GPUs. Better yet, Nixeus tested and verified that the EDG-27 v2 works with Nvidia’s latest drivers that rolled out FreeSync/Variable Refresh Rate support to the aforementioned cards.

You can learn more about FreeSync, G-Sync, and more in our monitor buying guide.

The Right Specs for the Right Price 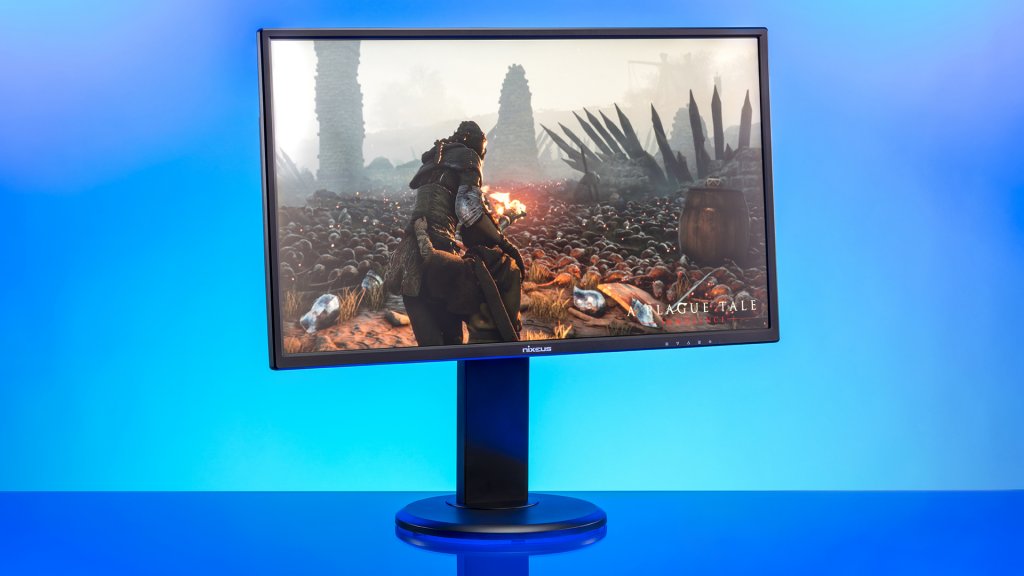 The Nixeus EDG27 v2 ticks all the boxes of a killer gaming monitor: a FreeSync range of 30Hz to 144Hz, 2560×1440 resolution, 4ms response time, and a 144Hz display with an IPS-type AHVA panel. Many monitors in the Nixeus’ price range promote how they support FreeSync at 144Hz, so what makes the EDG27 so special? The key is in its FreeSync range, something some monitor manufacturers obfuscate.

The FreeSync range is the range of refresh rates in which FreeSync works. In other words, if you have a monitor that purports to be a 144Hz FreeSync monitor, but only has a FreeSync range of, say, 40-70Hz, then none of the benefits of FreeSync apply if a game’s framerate were to go below 40 fps or above 70 fps. With the Nixeus, you can enjoy a smooth FreeSync experience at a framerate as low as 30 fps and as high as a silky 144 fps.

In the event a game’s framerate happens to falls under the FreeSync 30Hz minimum afforded by the EDG27, another neat piece of technology inside the monitor takes over to maintain smooth performance. It’s called Low Framerate Compensation (LFC), a technology developed by AMD for use in some FreeSync monitors that takes advantage of the monitor’s Adaptive-Sync capabilities to set its refresh rate to an even multiple of the current framerate and then duplicates the frames by the same factor. For example, if your game drops to 25fps, the EDG27 would adjust to 50Hz to compensate and the GPU would double each frame to stay in sync, thus preserving a stutter-free experience.

On a minor note, the EDG27 sports built in speakers, but as with most monitor speakers, they’re more of a convenience feature than something you’d actually want to use for gaming or media. As always, a headset or external speakers are recommended for an optimal audio experience.

Unboxing and Gaming on the Nixeus NX-EDG27 v2 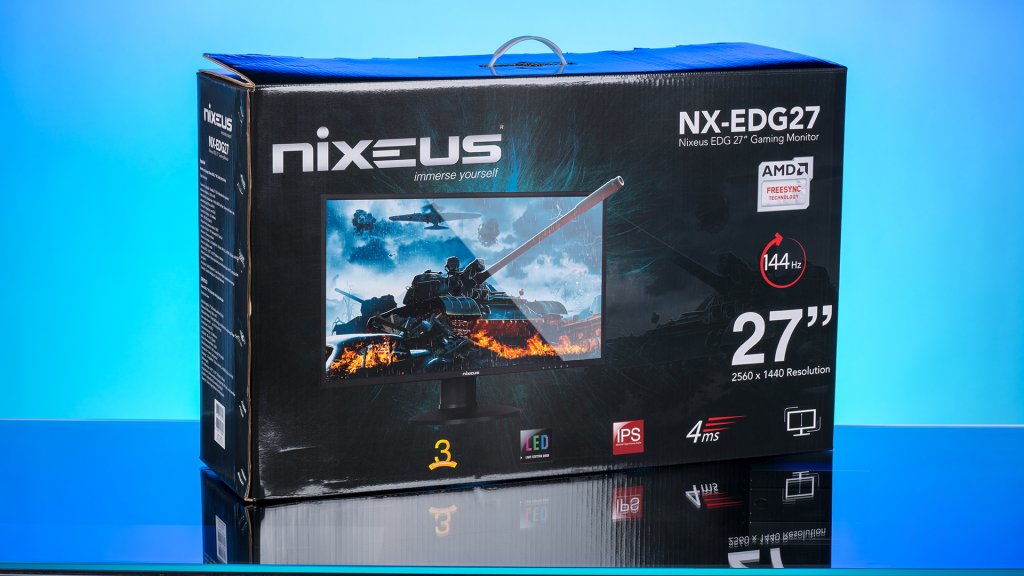 The EDG27 makes a good first impression before even turning it on. On a design level, it’s rather understated for a gaming monitor, adopting the standard black rectangle aesthetic used by the average office monitor rather than the wild color combinations used by some other gaming monitors. Whether or not that’s a good thing comes down to your tastes, but I personally prefer it. On the rear of the monitor are the display inputs: two DisplayPort 1.2a and two HDMI 2.0. You can use FreeSync at up to 144Hz over either DisplayPort or HDMI 2.0 when connecting to an AMD GPU, but you’ll need to use DisplayPort to even use FreeSync at all if you’re connecting to an Nvidia card. Also included with the monitor are a 5ft DisplayPort cable, a power cable, and a quick start guide.

Of course, once the EDG27 v2 is up and running, the magic really begins. Adaptive-Sync technology is really one of those technologies that must be experienced firsthand to truly appreciate it, but once you’ve used a FreeSync monitor, it’s impossible to go back to your old display. I’ve used multiple Adaptive-Sync/Variable Refresh monitors over the years — my personal monitor at home is G-Sync capable — and I don’t hesitate to say the Nixeus is one of the best I’ve used, and even handily beats my own monitor.

I played multiple games on the EDG27, including Apex Legends and Assassin’s Creed: Odyssey. My games of Apex ran buttery-smooth, with the vivid colors of the IPS panel and quick 4ms (gray-to-gray) response time nicely complementing the visuals. The most impressive test, however, was Assassin’s Creed. I was lucky enough to score a free copy of the game from Ubisoft as a gift for participating in the Google Project Stream tests, and excitedly fired it up on my home gaming PC. What I encountered was a gorgeous game, no doubt, but one with worse screen tearing than on any other game I’d ever played. Of course, my G-Sync monitor fixed some of those issues, but even then I would still run into the occasional bit of nasty tearing.

When I demoed Odyssey on the EDG27 with a modern Radeon-equipped PC, it was like playing a new game. I could finally experience the visual splendor Ubisoft created without all the performance hiccups I ran into at home. Even moments that before introduced absurd levels of tearing, like when you climb to the top a of a viewpoint and the camera pans around your character to showcase the lovingly-rendered surroundings, ran perfectly on the Nixeus. I don’t hesitate to say that it was one of the more revelatory graphical experiences I’ve ever had. In my opinion, showcasing your games the way they were meant to be seen (or arguably better) is the real strength of this monitor.

Nixeus: The Next Big Name in Monitors 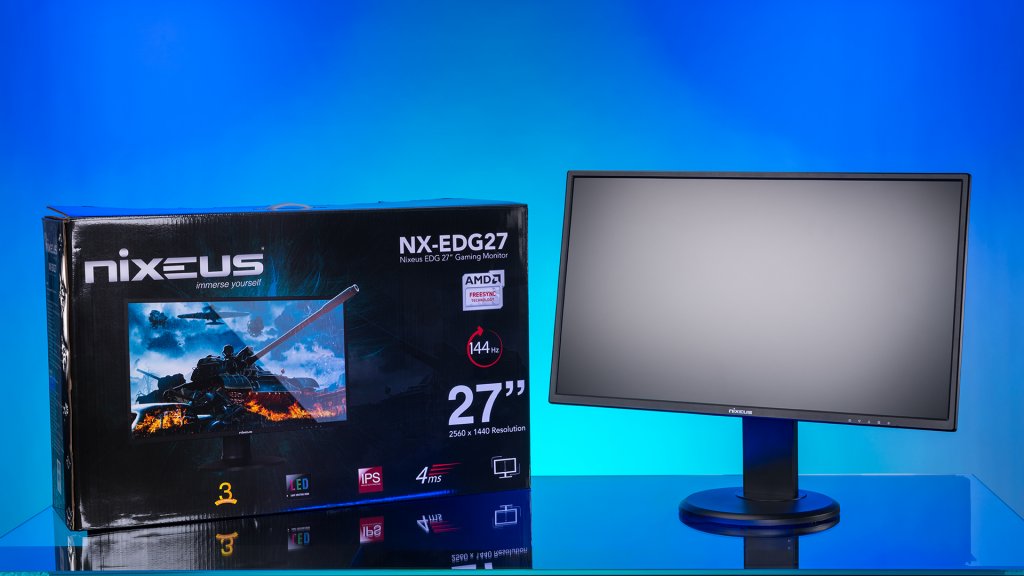 Investing in a FreeSync monitor is one of the best decisions you can make when upgrading your gaming setup. And if you want to get the most bang for your buck, then the Nixeus NX-EDG27 v2 should be your first choice. With how much value Nixeus has packed in their latest offering, I can only expect that the new EDG27 and Nixeus’ already glowing reputation will expand them beyond the confines of  “cult favorite” and into the pantheon of brands that instantly come to mind when discussing the best of the best.