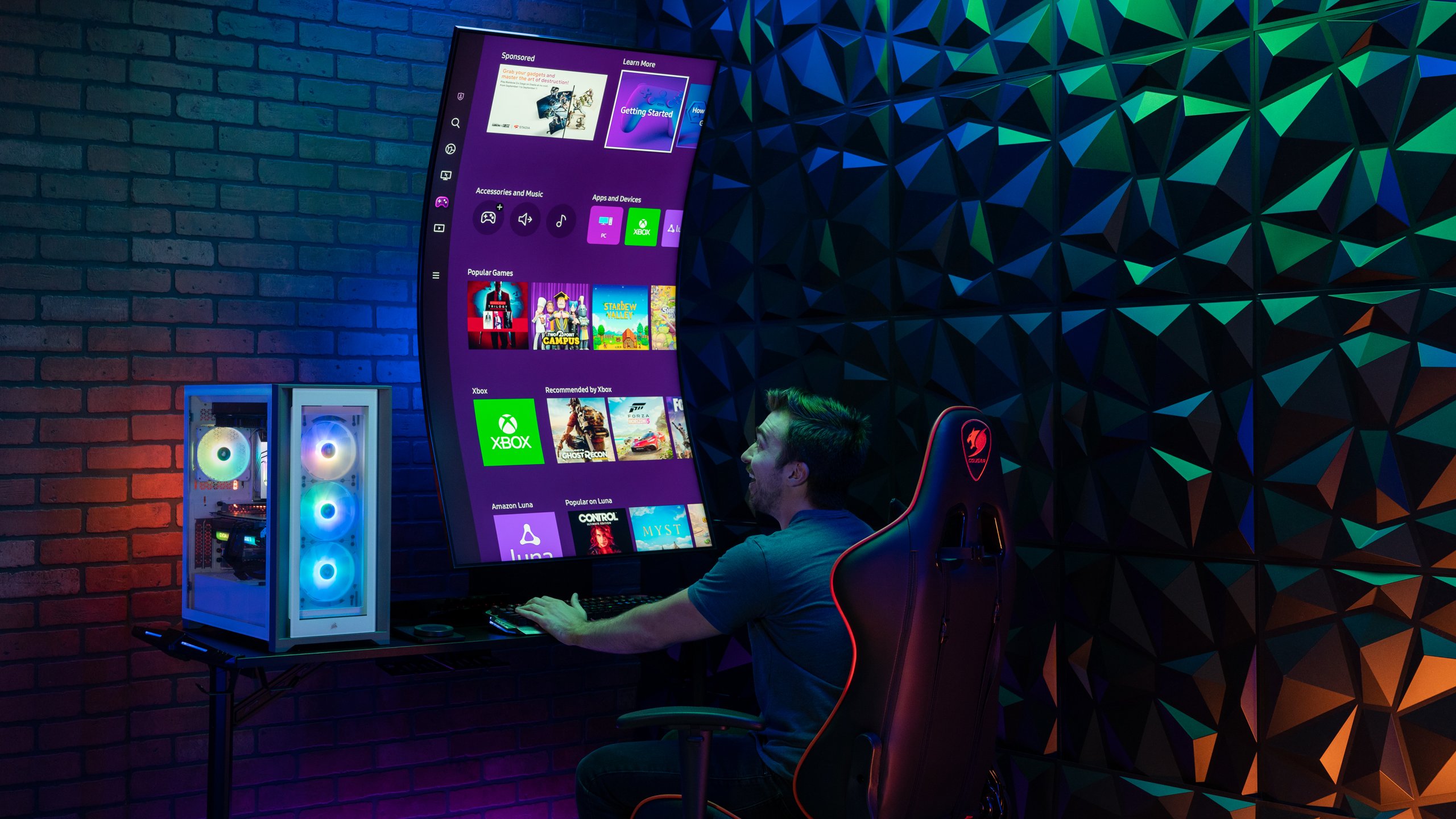 By Cody BrownSeptember 16, 2022No Comments 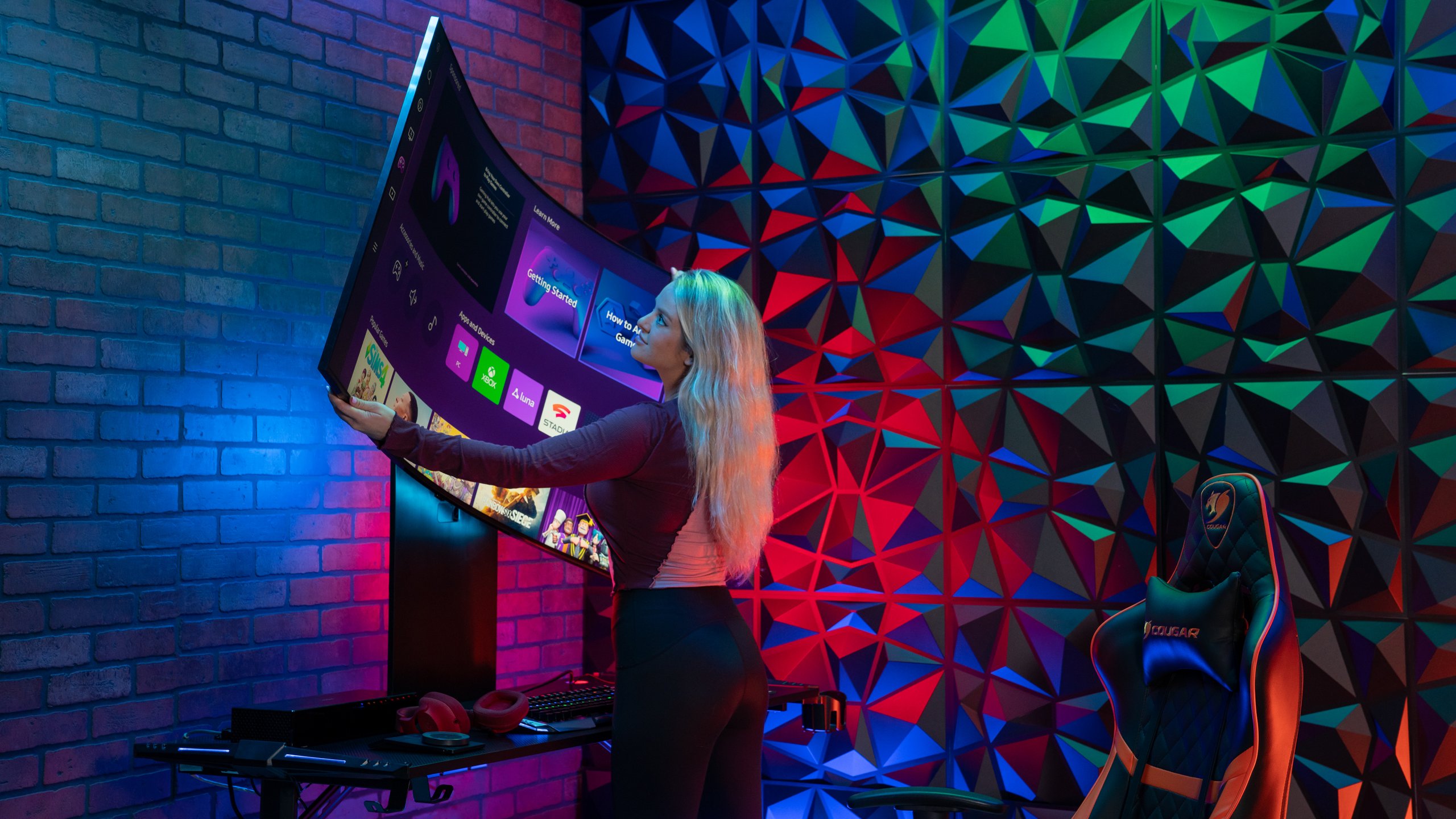 Foldable and flexible displays have been making the rounds in recent years. Numerous phones, monitors, and other devices have been making headlines for incorporating this new and innovative spin on electronic displays.

Manufacturers are also pouring tons of money into research and development, with an apparent belief that they’ll be the next big advancement in display technology. But are they?

Flexible screens are an exciting take on the traditional flat-screen display. And in a sense, they seem like the logical next step in display technology. But this seemingly newfound concept is actually a lot older than you might think. Enter: Xerox PARC.

Xerox PARC, the company that pioneered many of today’s technologies, such as the laser printer and Ethernet standard, also developed the concept of a flexible electronic display way back in 1974. The concept was developed into an “electronic paper” called Gyricon.

Since then, there have been many big changes in the development of display technology behind the scenes. But possibly the biggest one that makes modern flexible screens possible is OLED technology.

Due to the nature of OLED screens, which don’t need separate backlighting to function, it’s now possible to create displays thin enough to bend and flex. Combined with advancements in screen and glass technologies, you have the modern form of bendable and flexible screens and displays.

Fresh Takes on an Old Idea

Modern problems require modern solutions. And while flexible displays are anything but new, novel twists using the technology can showcase how it can be viable going forward and why we could be on the cusp of the next big thing.

Samsung is a manufacturer pushing boundaries with their flexible and foldable phones, but they are not focused solely on the mobile market. Samsung’s Odyssey Ark is a 55-inch curved display able to rotate, pivot, and tilt with Samsung’s proprietary Height Adjustable Stand (HAS). Combined with the curved, densely packed mini LED arrangement, the Odyssey Ark provides unique viewing that fills viewers’ peripheral vision to create a more immersive experience. The Odyssey Ark also gives users full customization by vertically or horizontally orienting the display. One of the Odyssey Ark’s features, Flex Move, allows users to adjust the screen size and ratios to tailor their viewing experience further. 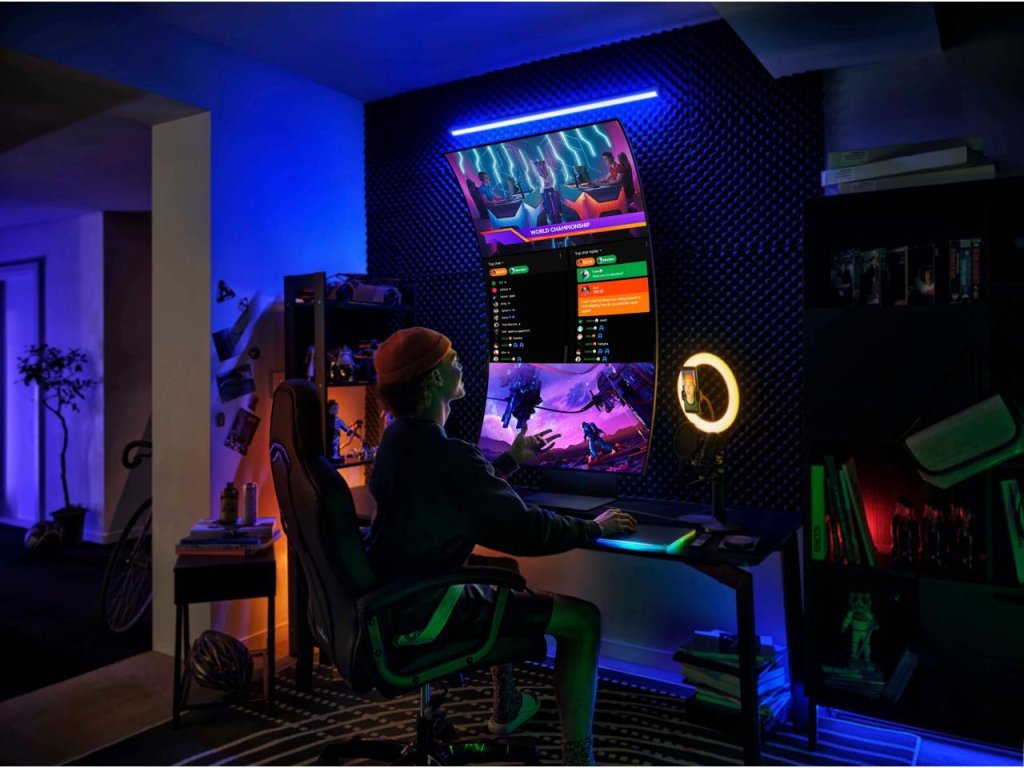 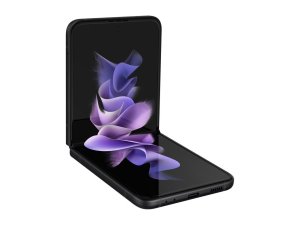 If you’ve watched videos or played games on a mobile device, you know that having a bigger screen can be much easier on the eyes. And this is one space where flexible and foldable displays are looking to revolutionize the tech industry.

The Samsung Galaxy Z Flip 3 is one example of how this can work. Its large 6.7-inch screen teeters on the edge of being too bulky as a phone. But folding the phone in half makes it easier to pocket and hearkens back to the days of old-school flip phones, where you could quickly clasp the phone shut and throw it in your pocket.

Of course, the Z Flip 3 isn’t a massive phone, comparatively at least. With other phones like the iPhone 13 Pro Max and Samsung Galaxy S22 Ultra coming in at comparable sizes, it certainly isn’t breaking ground in terms of total screen size. But it also showcases how phones can shrink in size without reducing screen space.

Folding phones can also allow us to have larger screens without making them unwieldy. The Galaxy Z Fold 4 boasts an impressive 7.6-inch display but folds down to a mere 6.2-inch phone-sized device that packs a tablet-sized wallop. And as companies continue to work out the kinks in foldable and flip phone designs, we could see phones that fold multiple times to allow for even bigger screens.

But folding and flipping phones aren’t the only ways to shrink our ever-growing desire for larger portable screens. The rollable phone is perhaps the most innovative and smoothest iteration of the big-phone-in-a-small-package.

We don’t have any rollable phones rolling into the market quite yet. But it’s certainly tech that’s in the works. Samsung has filed multiple patents for rollable and scrollable phone designs, while other companies such as Oppo, TCL, and LG have showcased prototypes of this phone style.

It’s uncertain if and when we’ll actually see rollable phones hit the market, but there’s clearly an interest in the tech from major manufacturers looking to push the envelope.

Smartphones seem to be leading the revolution of flexible screens, with folding phones first making their debut in 2018. But laptops would soon join the fold with the release of the Lenovo ThinkPad X1 Fold in 2020.

Being the first laptop with a foldable screen, it – and its successor, the Lenovo 16.3-inch ThinkPad X1 Fold – is here to prove that folding screens aren’t solely limited to smartphones.

Given what we’ve seen with the ThinkPad X1 Fold, this “laptop” is more like a tablet with a bundled keyboard. Or, as Lenovo’s vice president, Jerry Paradise, put it, a “chameleon of personal computing devices”.

In any case, it’s usable as a laptop and showcases how the future of laptops could use folding screen tech. With its 16-inch model folding down to a modest 12 inches, it’s not too far-fetched to think that we could eventually see 20+-inch laptops hitting the market with this technology. 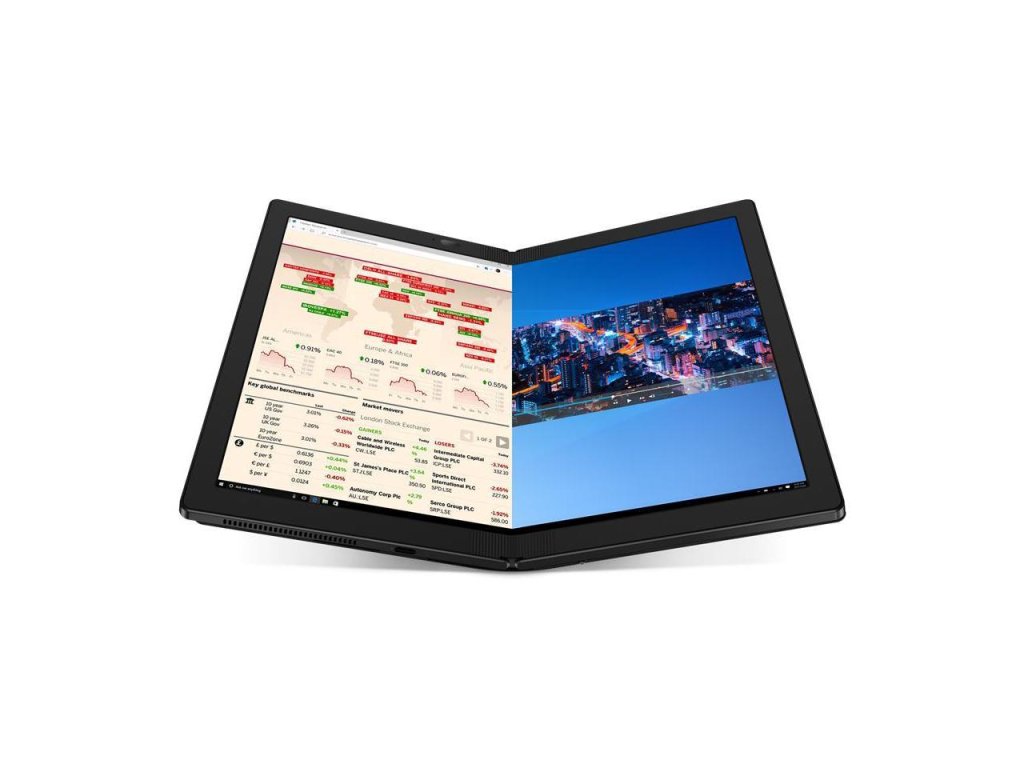 Monitors and TVs With Flexibility

Curved monitors are nothing new in the PC space and have made it to the mainstream. With the push for larger displays, having a curved screen allows for better immersion and utilization of the extra screen real estate. And so, unsurprisingly, flexible display technology is also making its way into the home as well.

You may have heard of the recently announced Corsair Xeneon Flex. If not, it’s essentially a new 45-inch flexible OLED gaming monitor that allows you to adjust the screen’s curvature.

This makes it ideal if you want a multipurpose monitor where you can choose between a flat or curved panel based on what you’re doing. For productivity-oriented tasks, a flat display might suit you more, while when gaming, having a curved display can create a more immersive environment.

However, while it’s a first in the PC display space, large flexible screens aren’t entirely new. In fact, they date back to at least 2014, when Samsung and LG unveiled a couple of massive flexible TVs during that year’s CES.

Curved and flexible TVs have been a much harder sell than their smaller computer monitor brethren, likely because they don’t work so well in the living room context. But what about rollable TVs?

Much like rollable smartphones, rollable TVs are probably the most interesting use of flexible display tech so far, allowing you to have a monstrous screen that can completely hide away with a simple push of a button.

Yet, unlike the rollable smartphones that companies have showcased in the past, where they’ve been little more than a tech demo of what’s to possibly come, rollable TVs are a product you can actually buy. Or, at least, there’s one.

The 64.5-inch LG OLED R debuted in 2021 and is the world’s first commercially available rollable TV. Of course, it’s not something you or anyone is likely to actually purchase, thanks to its eye-watering $100,000 price tag. Nevertheless, it’s an intriguing take on where flexible screens can possibly lead us to in the future of televisions.

And that brings us to the crux of our discussion: are flexible screens here to stay?

Flexible screens present a number of advantages to their rigid counterparts that could reshape how we think of smartphones, computers, and televisions in the future. But right now, we’re in the awkward early stages where there are still plenty of kinks to work out.

Chief among them is the price. It’s understandable – as, with all new technology, lofty prices are the norm in the beginning. Go back 50 years, and you can see equally (if not more) eye-watering prices for early home computers (devices that are now significantly less capable than even the cheapest computers today).

Nevertheless, flexible display devices costing thousands make it a hard sell for most consumers. Comparable, non-flexible alternatives are available for much less, making them even less compelling.

Durability is another important factor for adoption. Display tech over the last 20 years has been rather frail, and consumers are keenly aware of this. Plastic and ultra-thin glass screens are highly susceptible to damage, and the addition of mechanical action – another potential point of failure – to primarily electronic devices makes for a justifiable concern, further hampering adoption.

Until we start to see long-term, real-world usage and durability reaching equilibrium with practical pricing, manufacturers are going to continue to fight an uphill battle to quell doubts in all but the most fervent tech enthusiasts.

For now, though, it remains to be seen if flexible displays are the beginning of a revolution or nothing more than a passing fad.