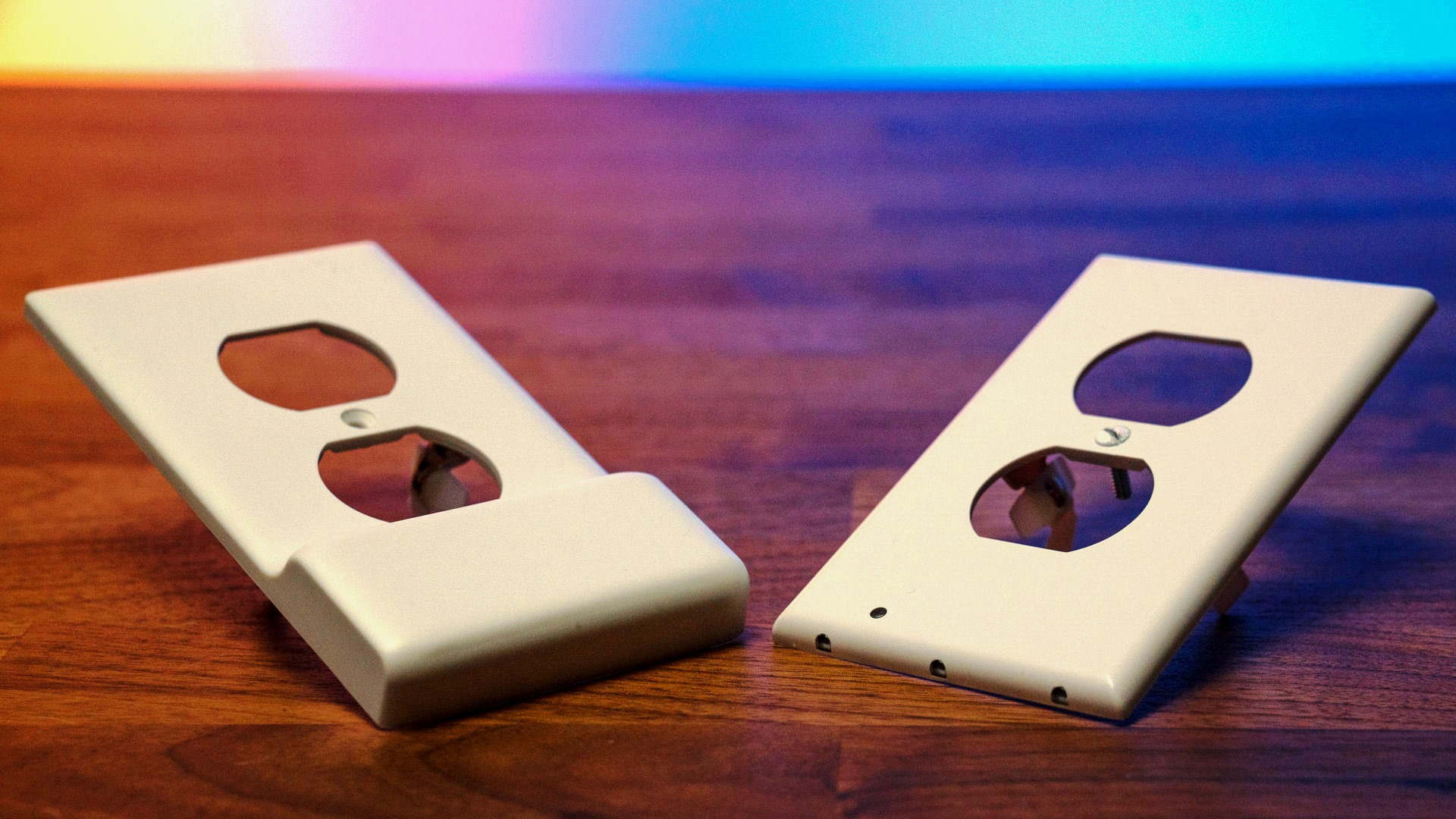 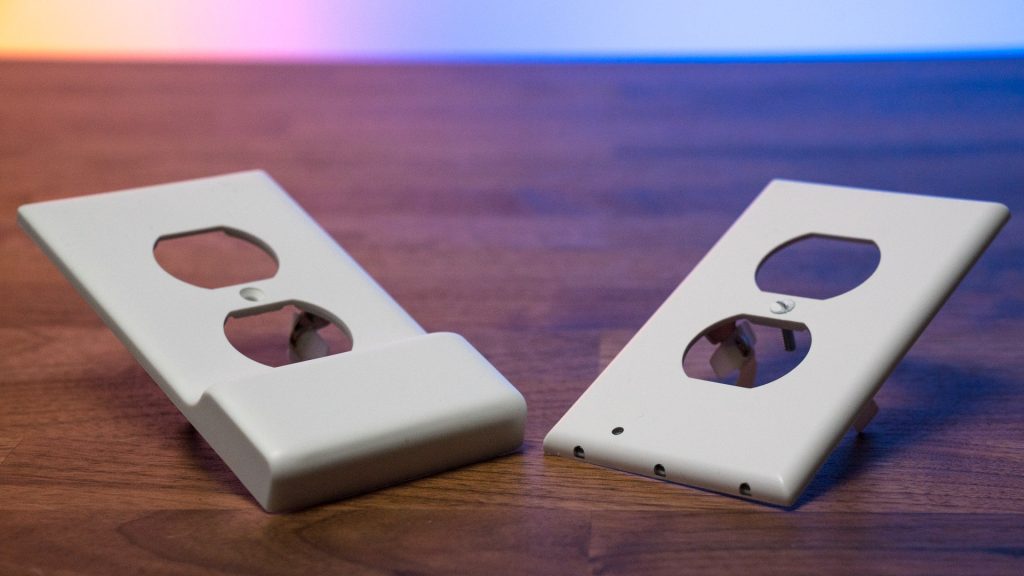 If you’re a homeowner there are most likely mountains of home upgrades that you have done (or will do) over the years. Sometimes they are big undertakings that hurt the wallet and devour weekends, and other times they are far less painful to complete. My personal preference is the quick and easy upgrades; simple, inexpensive, with an instant impact. While they aren’t necessarily the most technologically advanced projects (like say, adding a smart sprinkler controller to intelligently tune water use or installing a full-home speaker system), simple upgrades can give you an “instant win.”

In the name of easy upgrades, I discovered a few gadgets from SnapPower that are so simple, anyone who can operate a flathead screwdriver can get them up and running in 10 seconds. Basically they are a variety of electrical socket and light switch outlet covers, that have added goodies like LEDs or USB plugs. Simple is good, but are they practical? 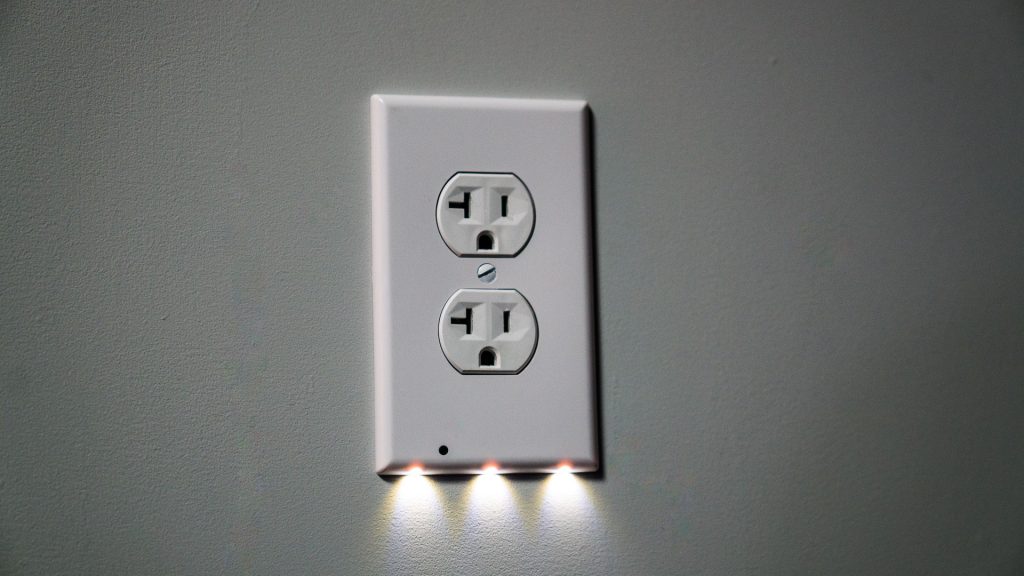 Outlet covers only get attention when they need replacing; they are a fixture in every single house in America, but haven’t advanced with the times until recently. SnapPower has a series of covers each affixed with three LED lights, customized for different applications. They have the standard dual-outlet duplex model, as well as the décor fitment, both of which retrofit over the stock covers with no modification. Unscrew the old, pop on the new, screw in and done.

Now keeping with the theme of simplicity, the LEDs turn on and off via a light sensor, so hallways and rooms always have a little night light to guide the way in a dark home, but you don’t waste electricity during the day.

I snagged a few of the LED outlet covers and popped them in outlets at places I would like a little extra light, like above the kitchen counter and in the front entryway. The three LEDs give off a bright white illumination that increases visibility quite a bit, enough to see well in even a pitch black house. They didn’t produce overly aggressive lighting, naturally, but offer just enough to be able to see better and give some pretty slick styling.

Unless you have something blocking the light sensor, it works well turning on in the evening and off in the morning, location pending of course. If the outlet just so happens to be upside down, the LEDs can actually be aimed upwards to create an “uplighting” effect which looks pretty sweet in a hallway, especially in greater numbers. 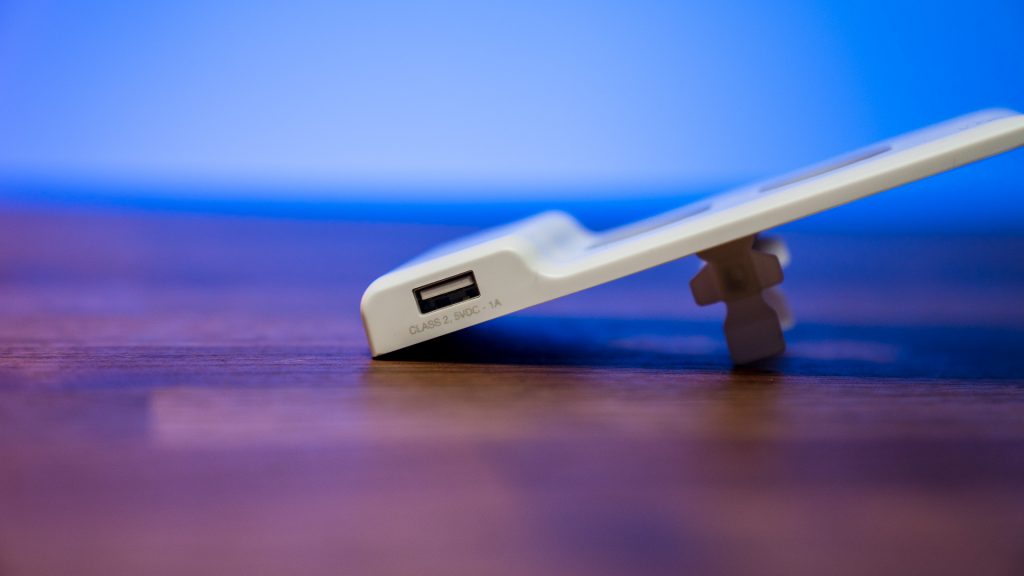 Another model that SnapPower brings to the table is their 5V1A USB outlet cover, which basically gives you an additional place to plug in a USB-powered device without taking up a pronged-socket.

At first I was hesitant to see the utility of this device, since most times you can just choose an outlet that is free of devices to plug in. And after all, every electronic that utilizes a USB plug connector to a wall socket usually comes with both, so it should never be too far, right?

Upon more thought though, I realized there are times when you want to use a particular outlet without yanking out the plugs that are occupying it for a simple charge-up. And yes, power strips or outlet multipliers are an option, but are not nearly as clean-looking. The outlet I chose to swap was in the kitchen, where I would often need my phone and want to keep it charged, but might not want to unplug whatever else I have set up.

I replaced the old cover that the coffee maker and espresso machine utilize, since it is a good location and these devices don’t get unplugged. The new USB outlet cover snapped in, and now I can use the kitchen devices at the same time I want to charge my phone, with no additional bulk or clutter around the outlet.

Phones, tablets, cameras, or even small speakers- many small electronics these days utilize USB plug connectors and can make use of this outlet cover.

These are similar to the outlet covers, but they were even more helpful for lighting up a dark hallway while also indicating the switch location. These come in both the standard light switch, and décor wide light switch applications.

I know that even in my own house I’ve stood in the dark grasping for the light switch I know is there, so having a guide light and night light is quite useful.

Restrooms and hallways are the best for these LED light switch covers, since you wouldn’t want bright lights on in a bedroom while you try to sleep. 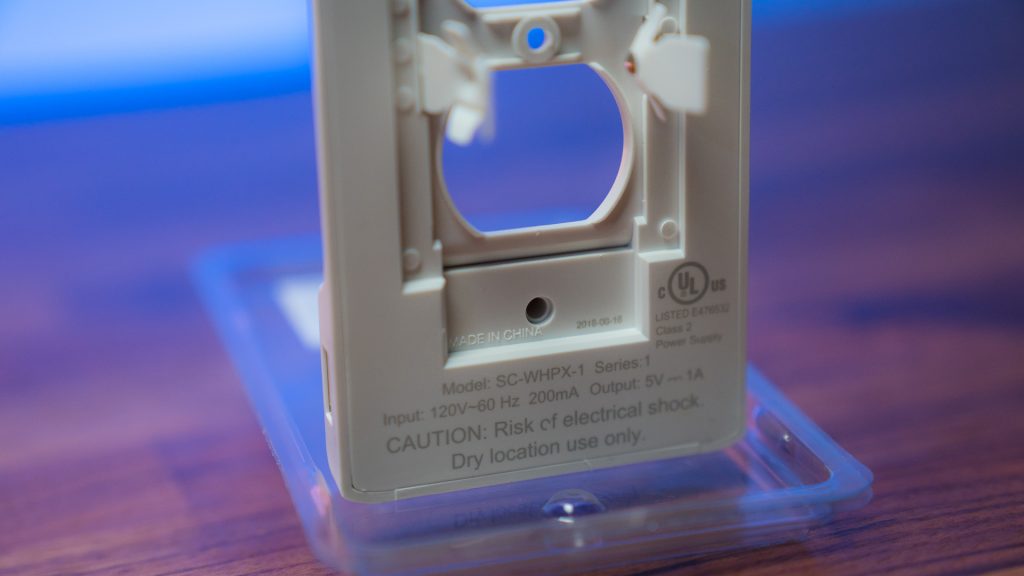 Built on the same principle as the LED outlet covers, these have one big difference for those with small children: safety sliders.

While this is not on the radar of someone without kids, for those baby-proofing their homes this suddenly becomes a big deal. Locks on every cupboard, choke-hazard items moved above three feet, and sockets plugged up.

Years back, a popular solution for socket safety that used a plastic stopper that was inserted in outlets. Those have since fallen out of use since, well, they can easily find themselves lodged in a child’s throat. These sliders are a much cleaner and safer alternative, and also don’t get misplaced. 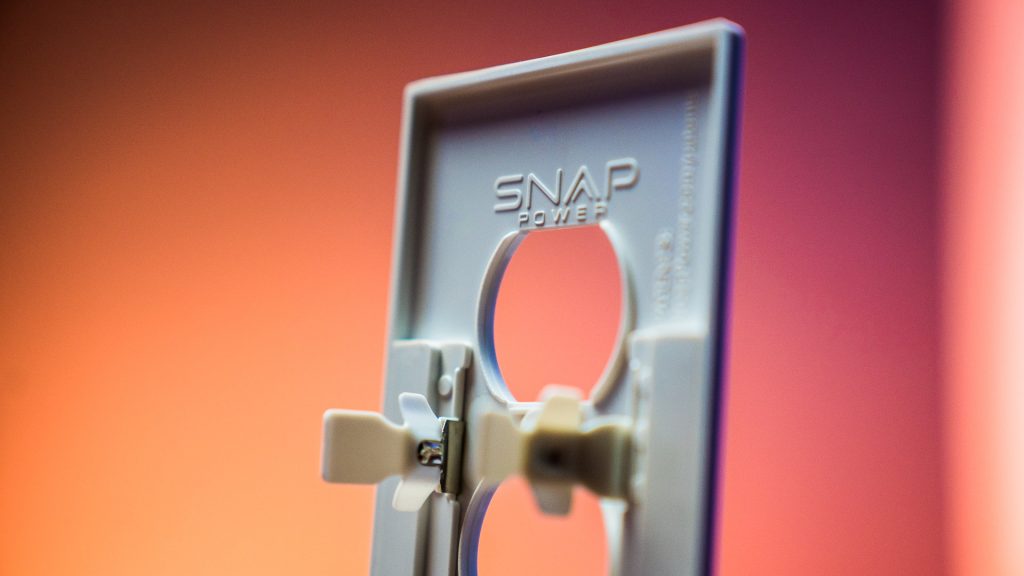 How do LED outlet covers work?

At the risk of sounding like a broken record, the workings behind the outlet and USB covers are based on a very basic design principle. The covers have two metal connection prongs that stand out from the cover, and make contact with each side of the outlet (or light switch). Specifically, the prongs make contact with the side lower screw heads, completing the circuit and powering the elements on the cover.

There are some non-compatible outlets which do not have the proper connection screws required to make a connection. GFCI, switch/outlet combos, USB outlets, or any other plugs without side screw terminals cannot utilize this outlet cover solution, so be sure to check what your setup is before shopping. 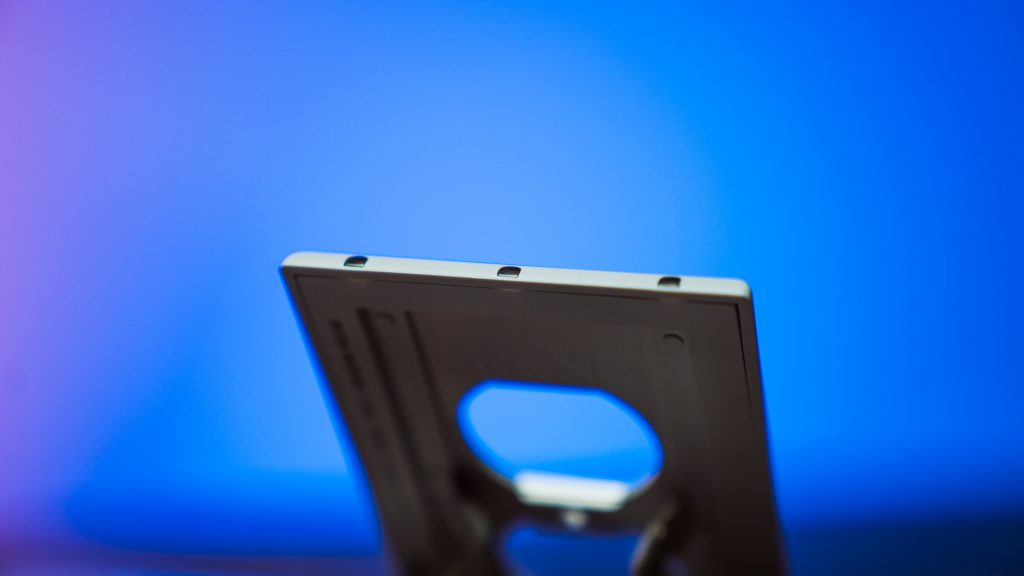 Swapping outlet and light switch covers is one of the most basic things that can be done to tech up your home, and you’ll get some great utility for your investment. The various covers come in a slew of colors too (white, black, light almond, or ivory), so pretty much any home color scheme can match with one of the options. Chances are most people would snag one to test it out and then retrofit whole sections of the home, which is why bulk packs are offered at a lower cost-per-piece.

Not every home device needs to be  brimming with the latest tech advances to be a neat upgrade. Also, anyone in an apartment who has limited access to altering their living space with drilling or physical changes can most likely make these small changes while still keeping their deposit.

Simple? Yes. Affordable? Extremely. Instant gratification? Definitely. I find it pretty rare that these qualities align so well, and I’m always looking for the easy wins like this to help balance out the complicated parts of life.