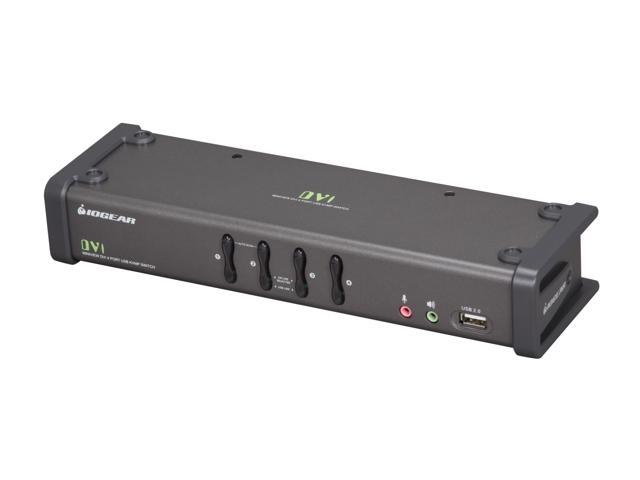 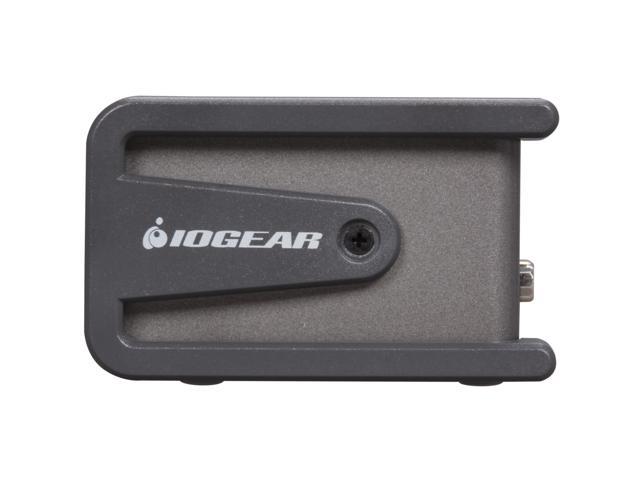 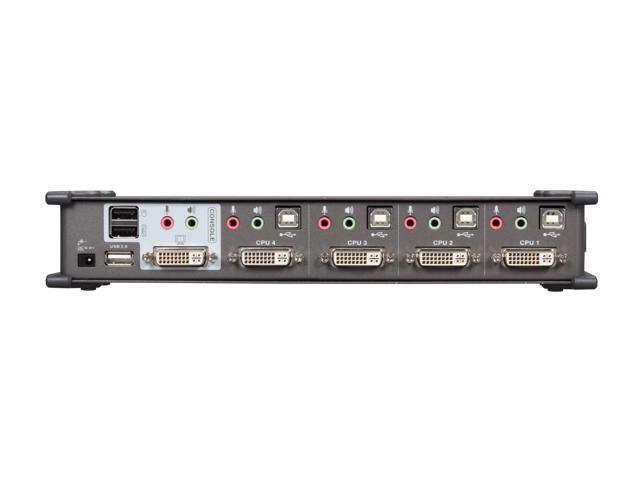 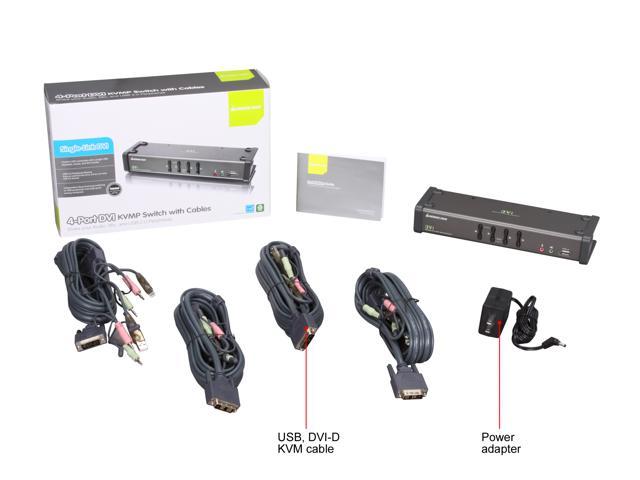 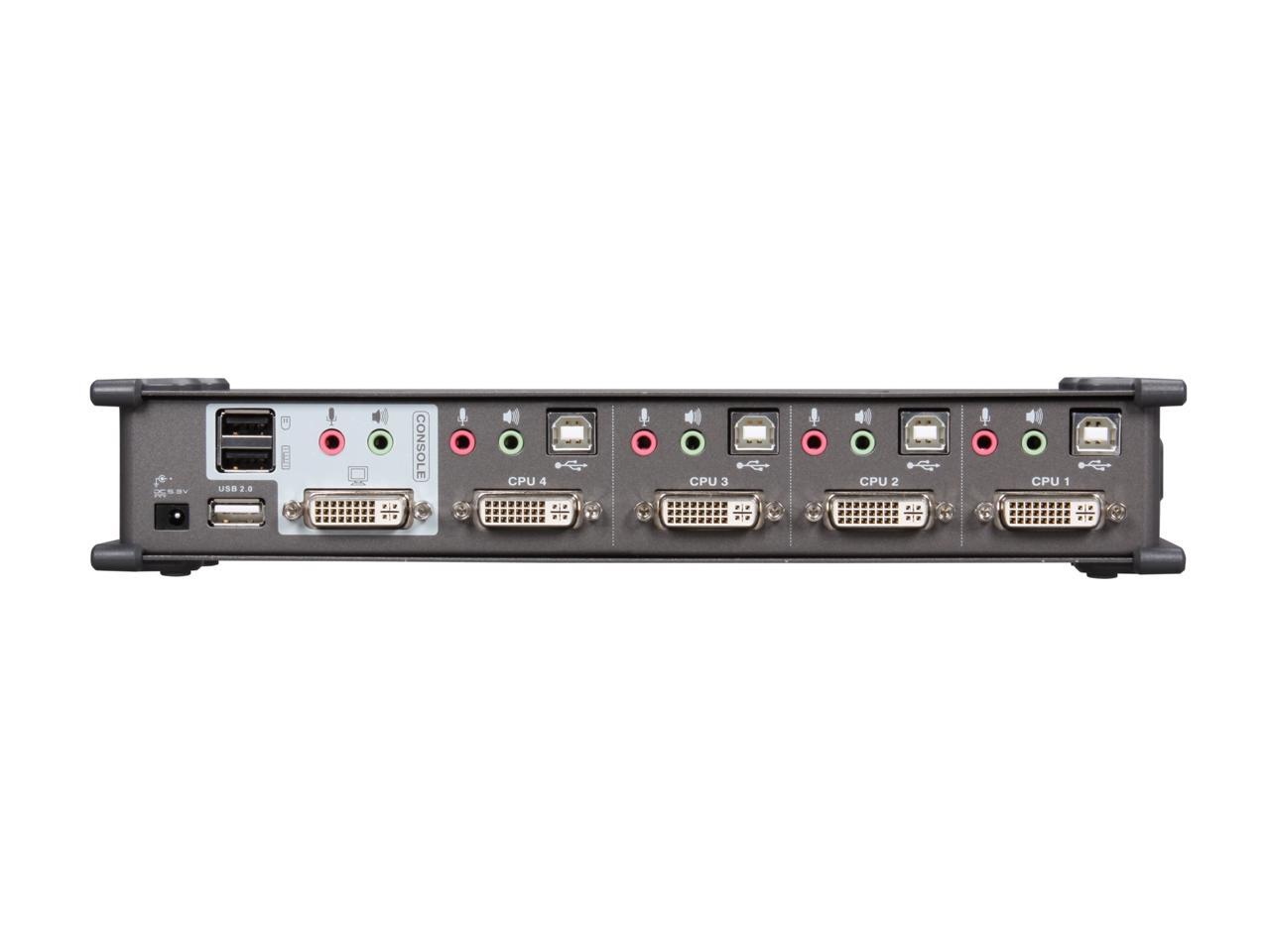 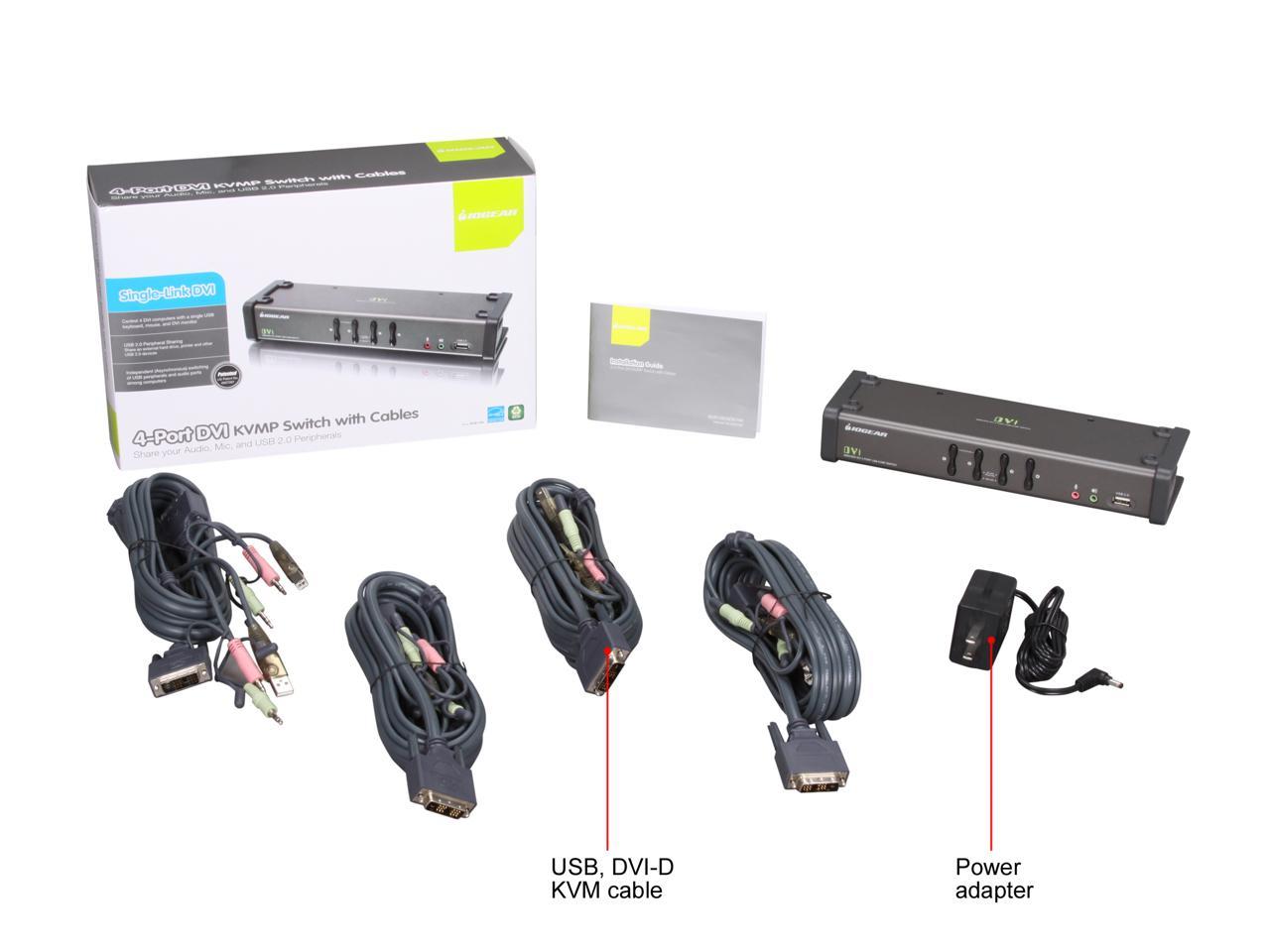 Learn more about the IOGEAR GCS1104

Pros: I'm very impressed with this switch. In the past I've never been satisfied with KVM switches, they've always been flaky devices but that was in the days of analog connections. This switch feels really well built and it works as specified. It comes with a set of four cable bundles which combine the DVI cable with a single USB cable plus audio cables. The mouse and keyboard are multiplexed over the same cable which reduces the number of USB connections that you need to make to the computers. When I saw that I was a little concerned however it turns out that it works just fine. I have the switch connected to three PCs running Scientific Linux 6.3.

Pros: Works with my Logitech G15 automatically! I can control the KVM from the keyboard and use all the special keys at the same time. Works with my Logitech G5 mouse as well, right out of the box. Quite a few programmable features- configuring relatively easy. EDID emulation helps prevent windows from getting confused about screen resolution. After switching, keyboard and mouse start working with the selected computer immediately.

Cons: Video is rather slow to display after switching. When I switch to another computer, I have to wait 4-6 seconds before the video will display. This happens even when the computers are running the same resolution. (your keyboard and mouse will start working almost instantly though)

Overall Review: I've been working with several different brands of multiport KVMs for many years. NONE are perfect; most are pretty bad actually. All the best KVMs I have worked with are made by IOGear. KVMs still have a long way to go as far as compatibility and functionality, but the GCS1104 is the best example of how far they have come.

6 out of 6 people found this review helpful. Did you?
Manufacturer Response:
Thank you for choosing IOGEAR and sorry about your experience. In regarding to the video switching delay, you can trigger the hotkey [Num Lock][-][d]. This command will capture and store the EDID info to the KVM to ensure the video card can receive the accurate data whenever it requests it. Please use this hotkey on each port to ensure all your 4 ports can get the correct EDID information. This should resolve your problem. If you have any further question, please contact our tech support at 1(866)946-4327 and we would be glad to assist you. Once again, thank you for choosing IOGEAR.
Anonymous
Ownership: 1 week to 1 month
Verified Owner
Excellent KVM switch and no problems5/22/2010 7:33:38 AM

Pros: DOES WHAT IT IS SUPPOSED TO, works perfectly with my Logitech MX1100 mouse, and (generic house brand) wireless keyboard, convenient cable arrangement, good size, sturdily built. I use 2 Linux machines, a windows 7 machine a laptop running XP. Unlike my previous (more expensive than this) KVM switch which reset the keyboards and lost the remapping when I changed hosts, this one doesn't do that and behaves well. I find the keyboard codes to swtich the port assignements and the like to be quite useful and not the least bit confusing - and it is a bit better 'thought out' than some of the sequences I've seen on other KVM switches. My main monitor does not support DVI-I but has one DVI-D and one VGA port - I use a signal splitter to drive the two of them and (with auto switch on the monitor) I don't have to change settings on the monitor when I switch to the laptop which has only VGA outputs.

Cons: At first I had the same problem with slow switching (all 4 computers are running with 1920x1200 @ 32 bit color) and it took about 5-6 seconds to get video. But the solution was already posted in IOGear's response (also in this set of customer reviews) and it helps tremendously. My only complaint is that after using this switch, I want to replace the other two KVM switches I am using at other locations, and I can't justify the $$ at this time.

Overall Review: I make my living as a software architect (and design and code among other things operating systems). I have been using KVM switches for at least 8 or 9 years, and this is by far the best one I have found. Nothing is perfect, and I do NOT use the audio features of this one (I run 4 of the computers into fiber optics for the audio and then feed an external amp and speakers that way) but a simple test showed that it worked well.

Pros: Great switch. I got this to use on my workbench at home and has worked like a charm. Easy switching, USB focus is a nice feature. What I love the most is that there are individual buttons to select your input. I have used other KVMs when you restart a computer the switch switches to another input, this does not do that and makes it great if you need to configure BIOS or whatever on a restart.

Cons: I hade one little hiccup once, no audio was being sent out. Just reset and back to normal. Not worth taking off an egg.

Overall Review: If you need a nice durable switch, you won't be disappointed.

Pros: This unit works great with my USB Wireless Keyboard and Mouse I got from Dell. I just have the receiver in the USB accessory slot and nothing in my keyboard/mouse ports. Still leaves the front open for a USB thumb drive.

Cons: Cables are very back heavy and if near the edge of a desk (like mine) it tips backwards...nothing some tape won't fix though.

Overall Review: Will buy another IOGear product again for sure.

Pros: Worked with my Mac Mini. Keyboard, mouse and video all worked. Also worked with everything else (Windows and Linux), but the Mac was my biggest concern. I'm using an ASUS 25.5" 1920x1200 monitor, and every device sees it correctly. I'm using a windows keyboard, and the Mac is okay with that. My mouse is a Logitech G5 and, again, the Mac is okay with that. Everything is working on this KVM.

Cons: Haven't found a way to switch video/keyboard without switching the audio using hot key combination. I can do it by briefly tapping one of the KVM buttons though.

Overall Review: I'd recommend this to anyone who needed 4 KVM ports.

3 out of 3 people found this review helpful. Did you?
Manufacturer Response:
Thank you for choosing IOGEAR and we are glad that you like our product. For the hotkey sequence to switch KVM focus without the audio and USB peripherals is [Scroll Lock][Scroll Lock][k][Enter] to switch to the next port or [Scroll Lock][Scroll Lock][n*][k][Enter] to switch to the specific port (*n being the specific port number). You may refer to P. 16 of our Installation Guide for more detail. If you have any further question, please feel free to call our tech support at 1(866)946-4327 and we would be glad to assist you. Once again, thank you for choosing IOGEAR.
Robert A.
Ownership: 1 week to 1 month
Verified Owner
Seems pretty solid6/8/2010 5:55:31 AM

Pros: - DVI Support - USB Keyboard/Mouse emulation - EDID emulation - USB 2.0 - Solid build quality. The unit is apparently metal and quite sturdy. Much more so than I would have expected.

Cons: - Only one USB port for peripherals (you may want a USB hub) - Power brick is awkward shape and can block other outlets on a surge, you may want a short extension. - Could have better setup for users with a Mac keyboard without scroll lock. Somewhat of a pain if you don't have a windows keyboard handy.

Overall Review: Surprisingly the USB keyboard/mouse emulation works well with my Logitech G500 mouse. I didn't expect that to work.

3 out of 3 people found this review helpful. Did you?
Manufacturer Response:
Thank you for choosing IOGEAR and we are glad that you like our product. Just to fill you in, this KVM does have 2 USB 2.0 peripheral ports – one in the front and the other one is in the back. As for the [Scroll Lock] issue for Mac keyboard, you can trigger the [Clear][-][T], then you can change the hotkey from [Scroll Lock] to [Ctrl]. You can see the Installation Guide for more details in regarding to how to change to the alternate hotkey. If you have any further question, please feel free to contact our tech support at 1(866)946-4327 and we would be glad to assist you. Once again, thank you for choosing IOGEAR.
Anonymous
Ownership: 1 week to 1 month
Verified Owner
Followup: Was great when it worked...5/28/2010 11:44:38 AM

Pros: I ordered the swtich on the 10th and 2 days later it was delivered - usual newegg efficiency. Then I wrote the review "Excellent KVM switch and no problems" on the 22nd, and EVERYTHING I wrote in the review still stands. Or did while it worked. The next day port 2 died altogether and the day after that port 1. (See cons below)

Cons: I was working on the system on port 2 when suddenly my screen went black as if there was no signal. I tried the other ports and they were fine. Suspecting a loose cable, I checked all connections - but no luck. I also tried a 'normal' DVI-D cable from the computer to the DVI input on the switch - but the results were the same. The next day the same thing happened (while I was working on another port this time). One of the 1st 2 ports still works for VGA, but I needed this for DVI. Sigh. I spent forever on hold with IOgear tech support and got cut off several times while on hold waiting [NOT GOOD]. Finally after being on hold for "only" one hour 13 mins, I got a technician who proposed a solution which I tried, but it failed. He had recommended returning it if that didn't work (see other thoughts) so that's what I'm doing.

Overall Review: The IOgear support technician told me the only thing I could do was unplug the unit, disconnect all 4 computers, depower EVERYTHING, then let the unit sit for at least 10 mins. I let it sit that way for 2 hours then reconnected the 1st computer to port 1 doing the re-power sequence as described. However, ports 1 and 2 were still dead (for DVI) He offered to let me return it under warranty should that fail, but I think that would have been for a 90-day warrantied refurb unit. But I didn't call back to do that since it was new and I could return it to NewEgg for a refund. I'm not sure which switch I'm going to buy but even an expensive 4-port DVI kvm switch is cheaper than 3 more monitors, keyboards, and mice, and it takes up less room ... I don't know if this is a problem with IOgear or not, but I doubt it. Their other equipment I have used over the years has worked well. But this experience makes me at least a little nervous.

3 out of 3 people found this review helpful. Did you?
Manufacturer Response:
Thank you for choosing IOGEAR and sorry about your experience. The unit shouldn’t turn bad as described, you can try triggering [Num Lock][-]+[D] to recapture and store the monitor’s EDID information into the KVM and see if that would fix the problem. If that does not help, we believe you might have a bad unit. Since this unit is backed by IOGEAR’s 3 year warranty, please feel free to contact our tech support at 1(866)946-4327 and we would be glad to RMA you a new unit. Once again, thank you for choosing IOGEAR.