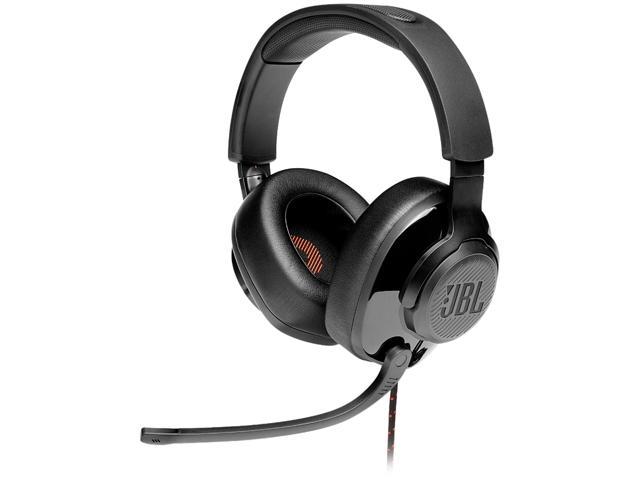 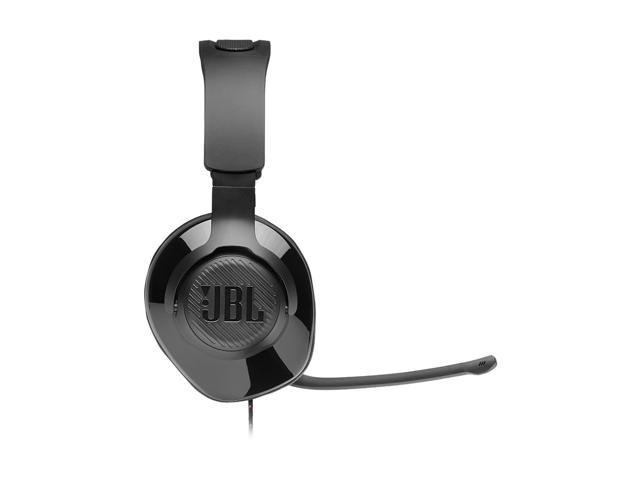 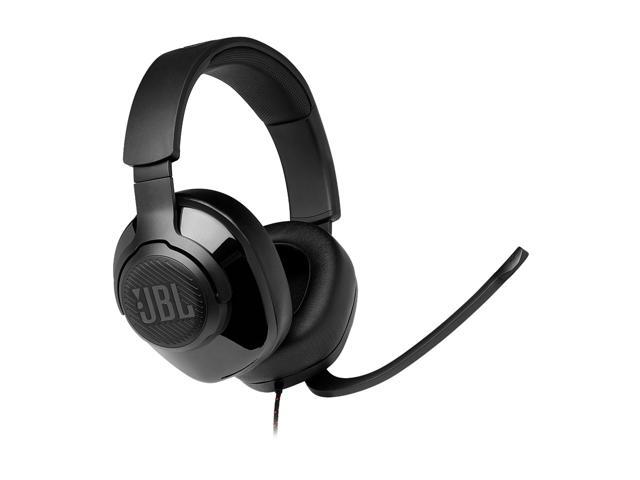 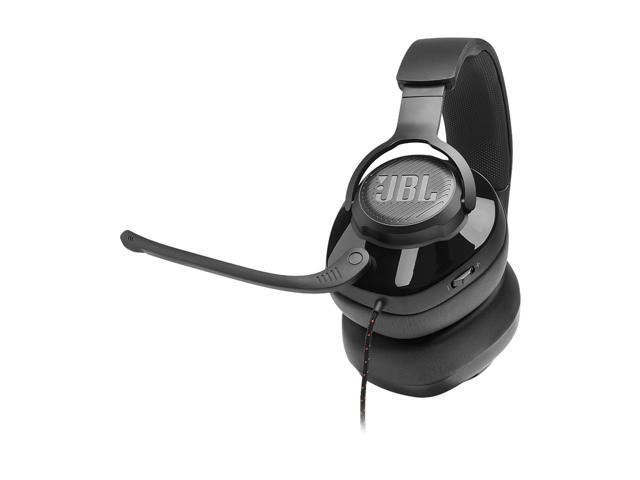 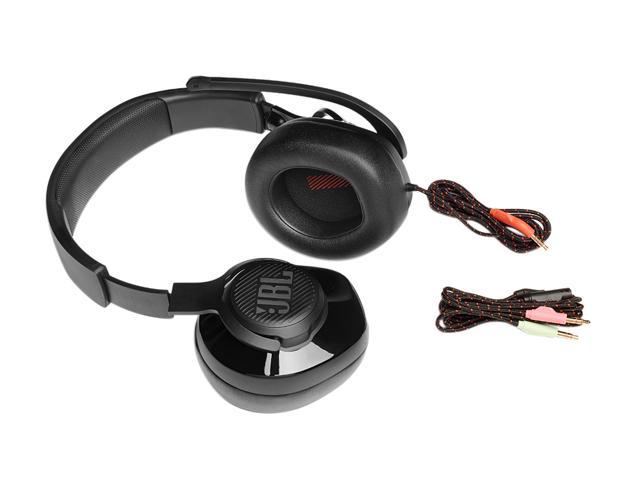 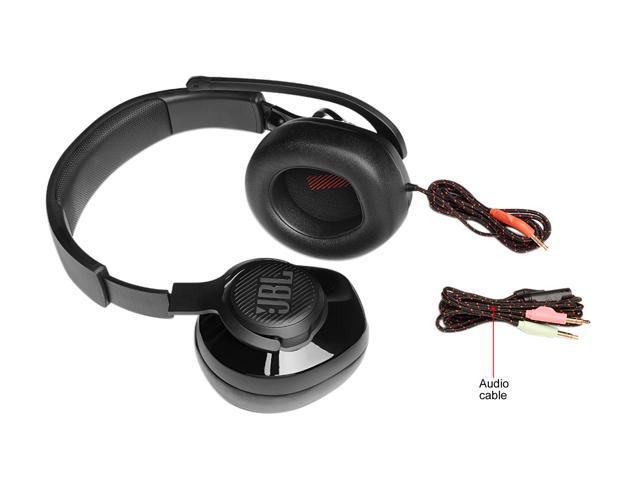 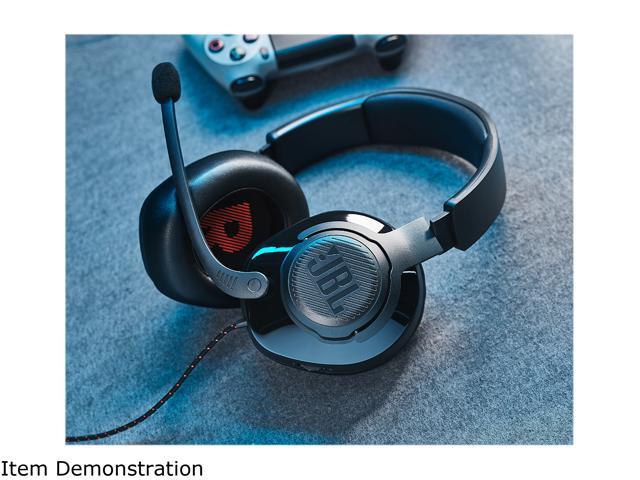 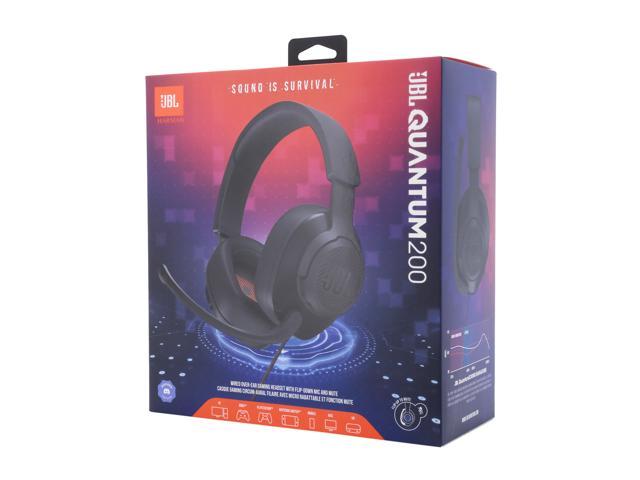 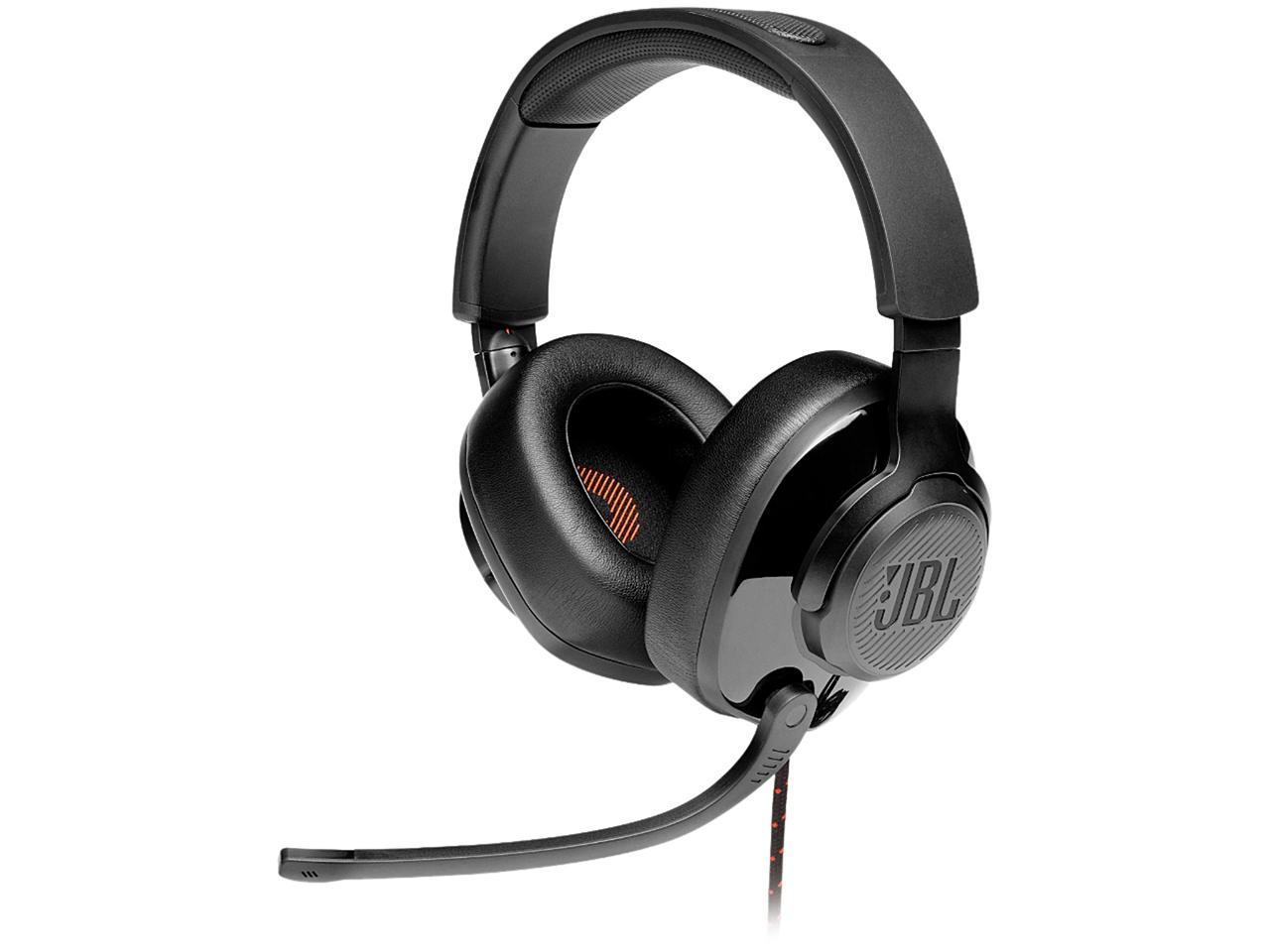 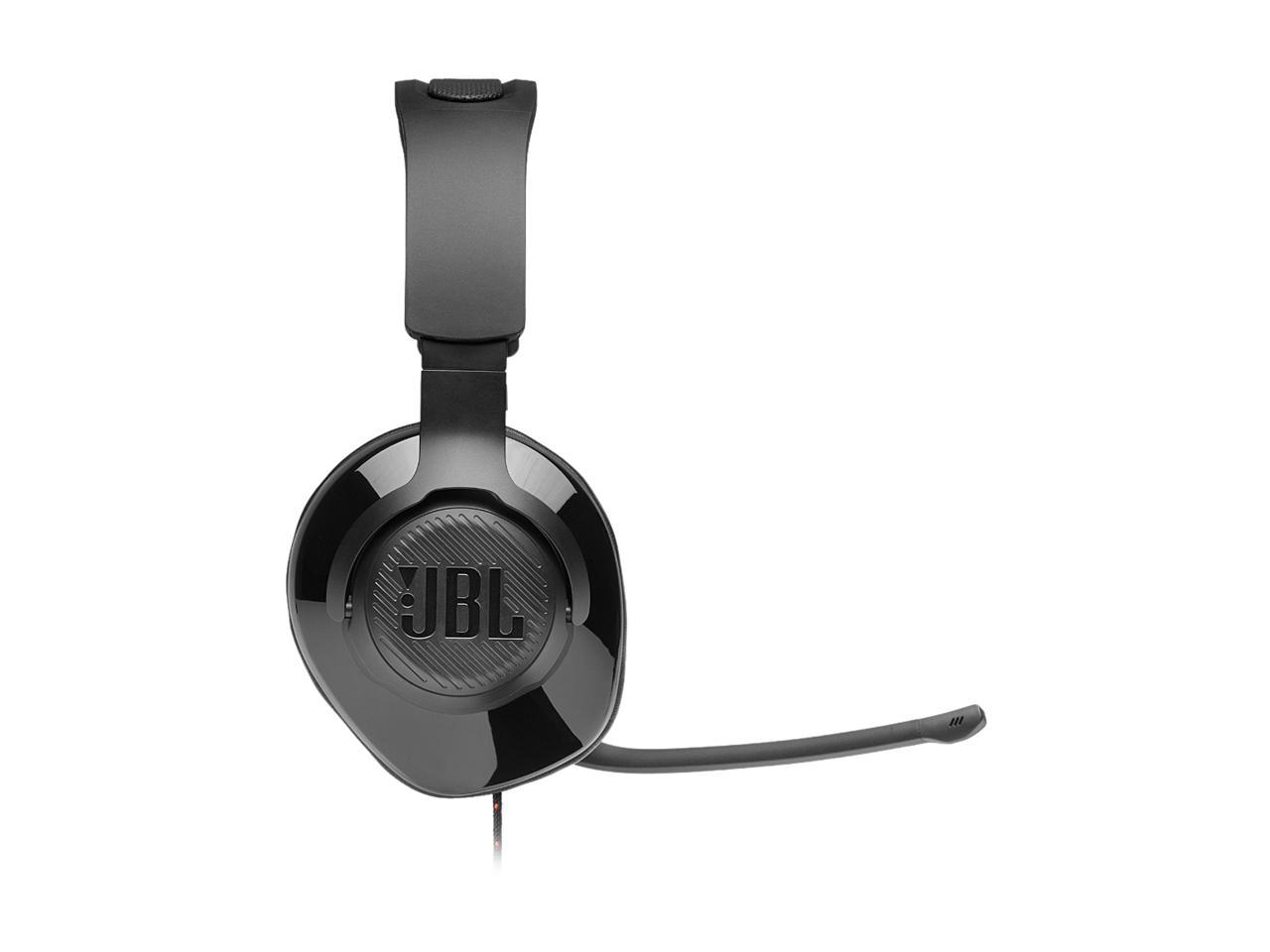 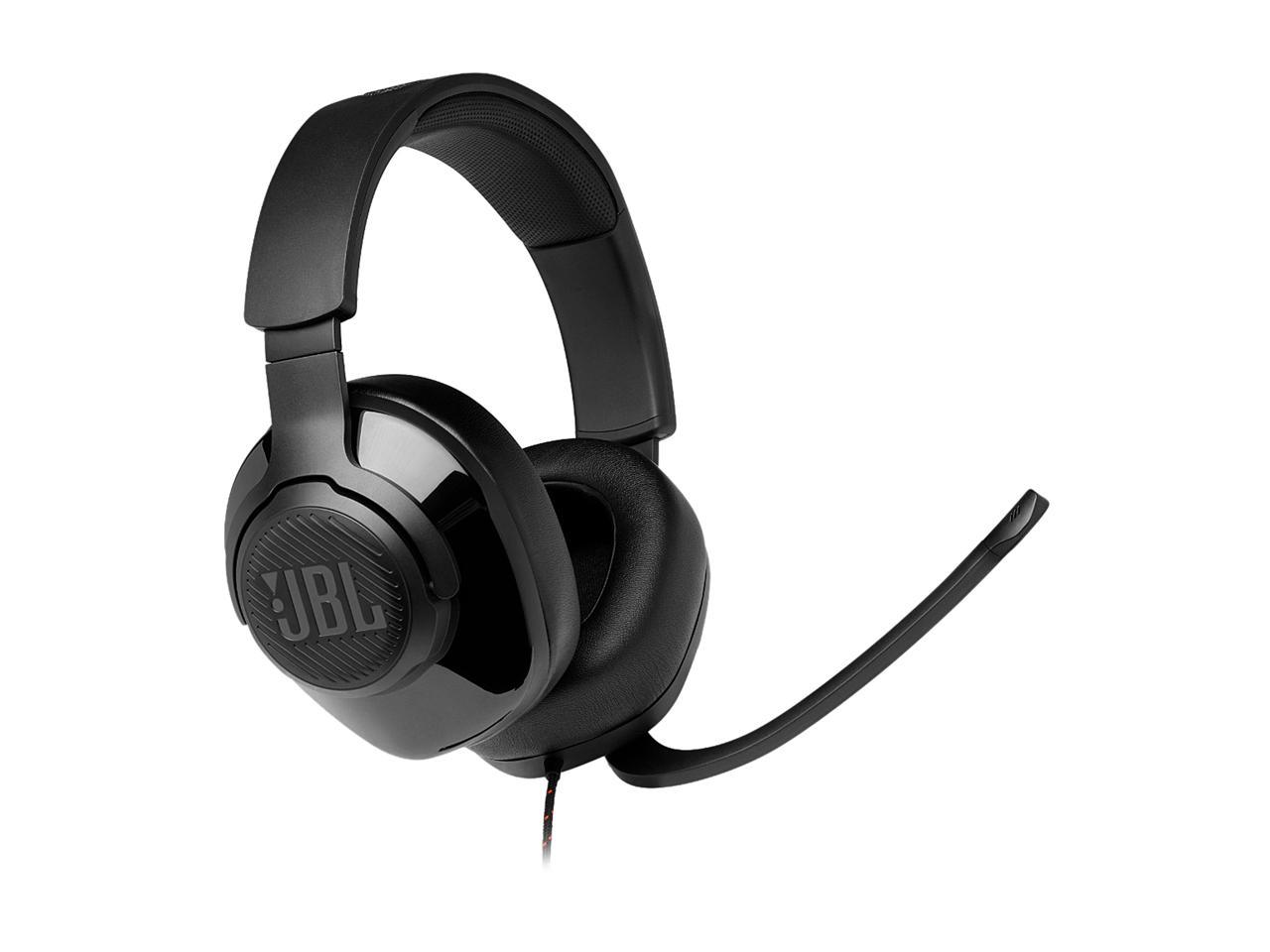 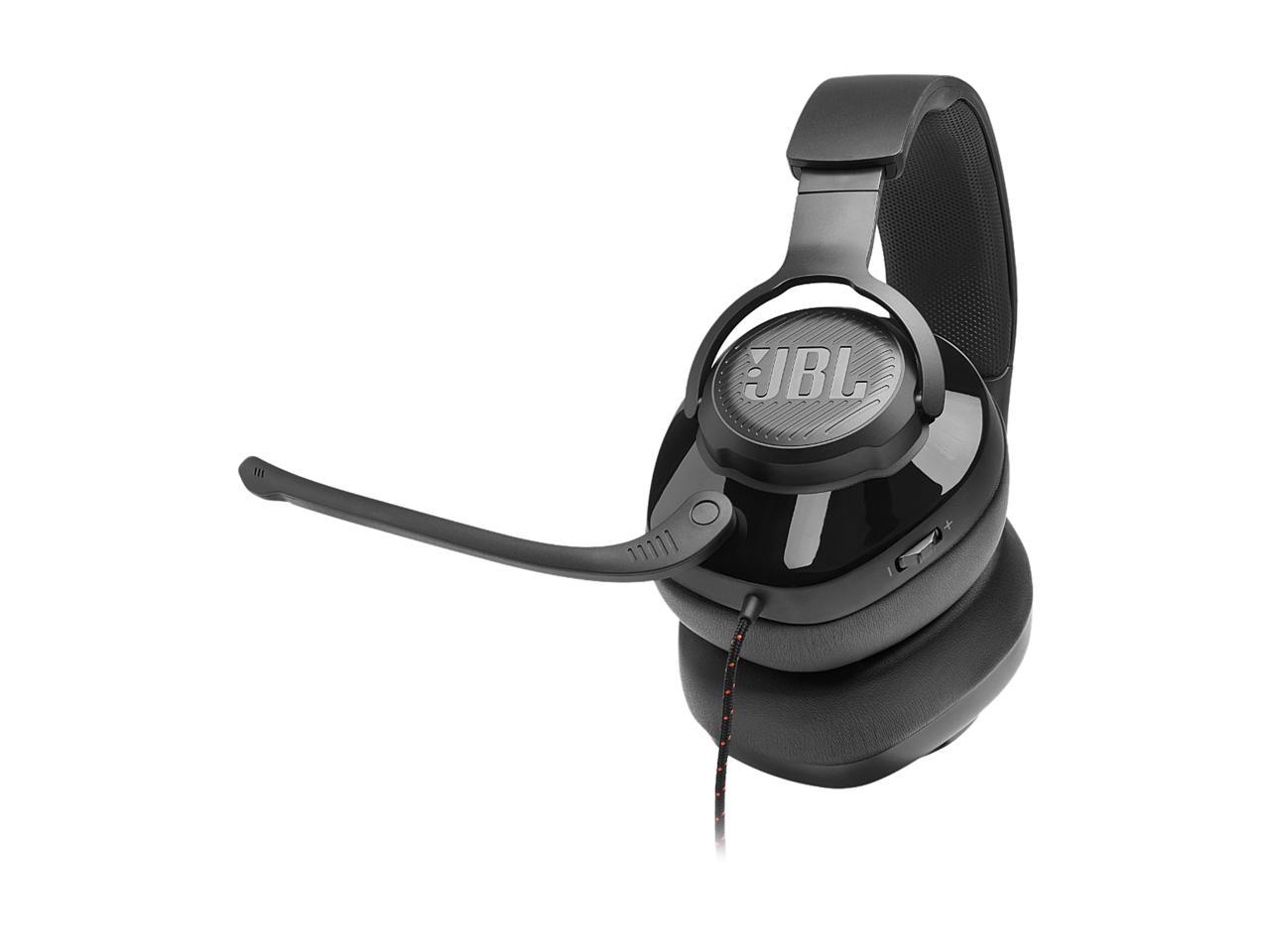 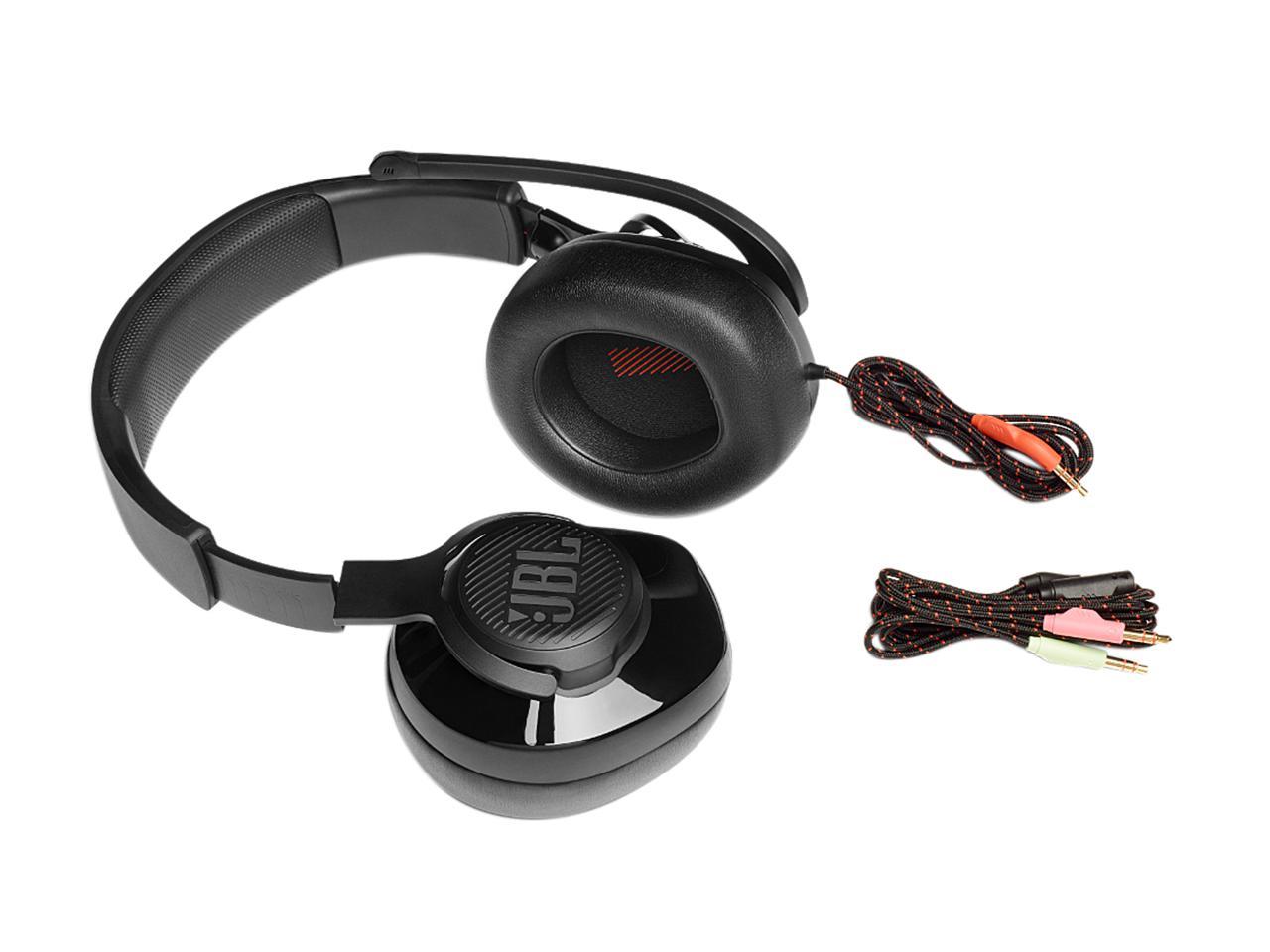 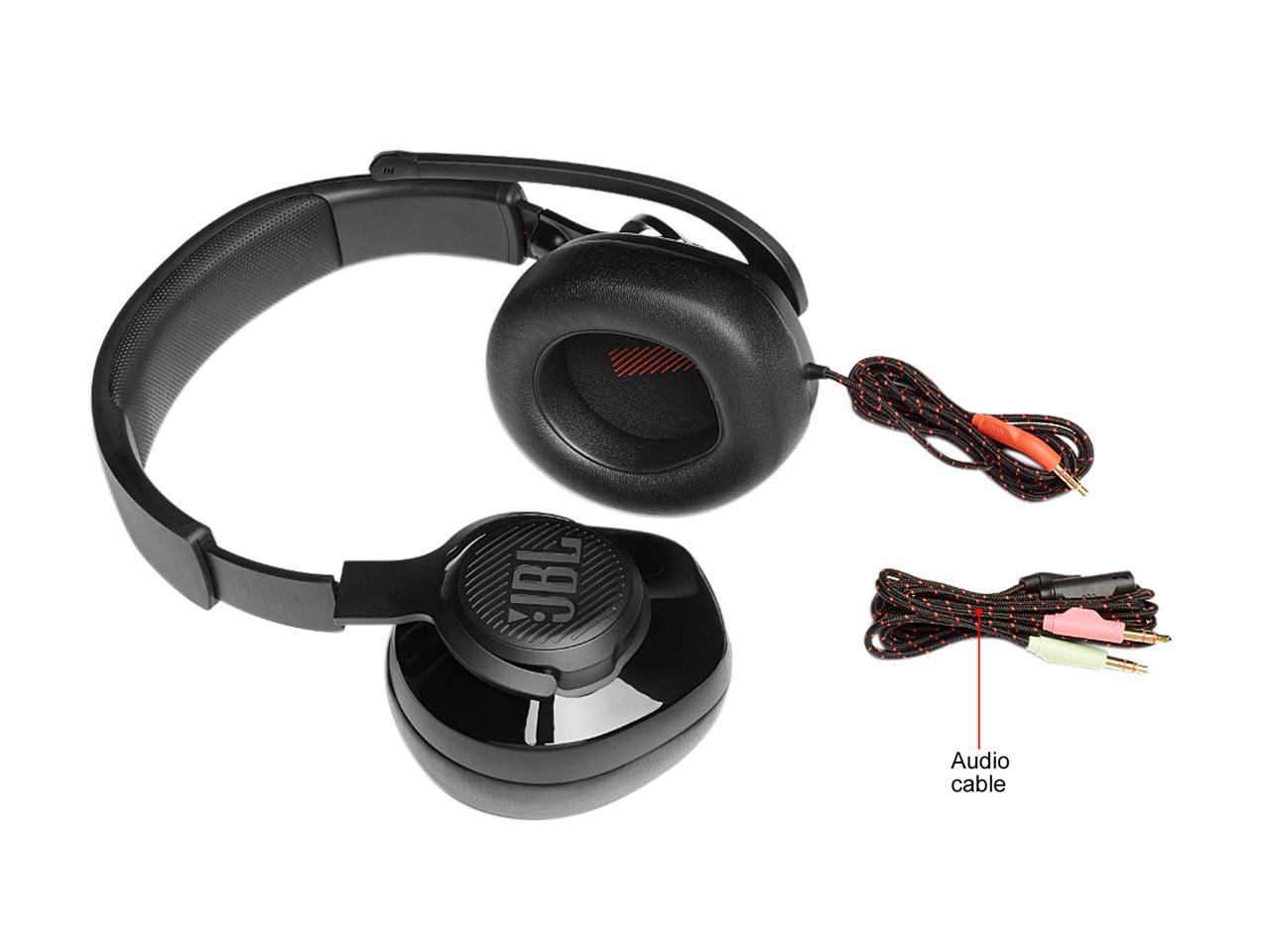 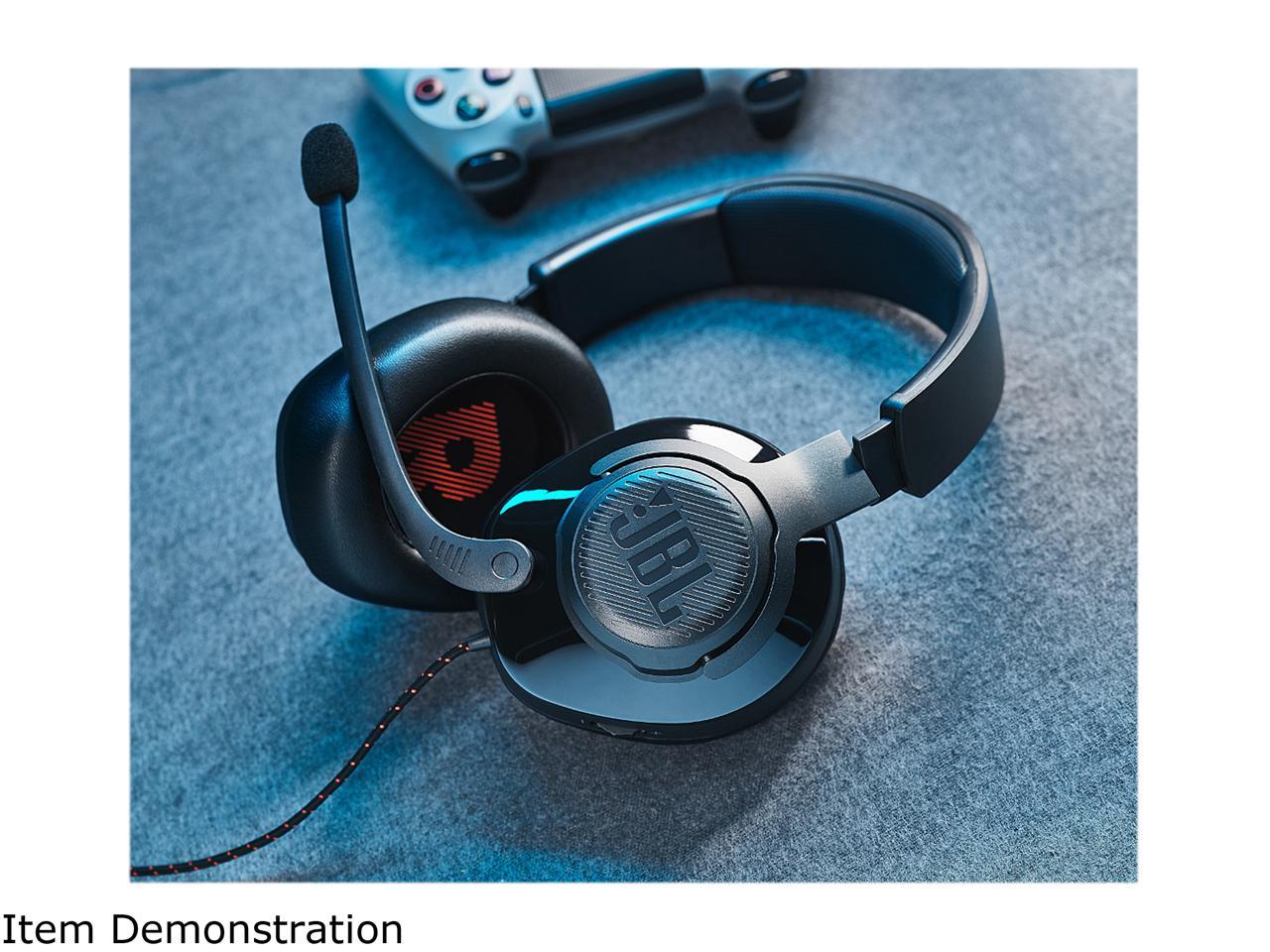 Turn your game into an epic event. Featuring JBL QuantumSOUND Signature, the JBL Quantum 200 headset puts you right in the middle of the action. Immersive and accurate, so that you can hear even the tiniest details, the JBL Quantum 200 equips you with all you need to own every battle. Voice focus echo-cancelling boom mic with flip-up mute enables clear multiplayer interactions while memory foam cushions let you game in comfort for hours. The premium materials ensure durability through time and wear. Amplify your experience with the JBL Quantum 200 headset. Be at the center of the game with JBL QuantumSOUND Signature

From the tiniest footsteps to the loudest explosion, JBL QuantumSOUND Signature makes every scene epic and every gamer more competitive. With the help of 50mm drivers, our signature audio delivers the most realistic soundscape for a competitive advantage in any battle.

The lightweight headband and memory foam ear cushions were designed for durability and comfort even during the longest gaming sessions.

Thanks to their flip-up, voice focus directional boom mic with auto on/off and mute features, the JBL Quantum 200 headset lets you rally the troops and opponents with clarity.

Made for your favorite platforms

JBL Quantum 200 headset is designed for full compatibility with the native surround sound system built into Windows 10 PCs and Xbox™ ONE consoles.

What's in the box:

Learn more about the JBL QUANTUM 200

Pros: - Sound quality was alright, not the best though

Cons: - Literally broke when i put them on. I cannot make this up.

Overall Review: The plastic is so dinky and cheap you could probably break them by slapping them. Not a big russian dude slap, like a 6 year old kid slap. -1 that the mic isn't retractable and it somehow gets in the way 24/7. I've experienced JBL purposefully making things break over time before (used to have a flip 3 which they dont solder down all three pads for the amp, making it stop working eventually). Only bought them since I was on a tight budget, but you'd probably be better off with some dirty buds which come with your phone.

Overall Review: I would recommend these headphones for anyone looking for good sound on a budget.

Pros: ANC works fairly well (roar becomes high frequency hissing)Battery seems to last long enough per charge (10+ Hr) -- will find out whether it can be replacedSafety interlock prevents charging of battery while using the (included) 2.4 GHz dongle or Bluetooth (meaning head won't burn/blow up)Padding is soft (memory foam underneath?)Can apparently connect via Bluetooth to one source (laptop or cellphone, and via 2.4 GHz dongle to a second source (laptop, desktop), at the same time, meaning can hear both of the two audio sources, mixed together. Do not think this feature is documented.Have been told (by those listening) that the noise cancellation on the microphone is excellent. (Remote) listeners cannot hear (constant) loud background sounds (noise), just the voice.

Cons: Could not update firmware on headset using original JBL software: tried both while connected via Bluetooth (got 50% of the way) or while connected via dongle (quits as soon as connect power cord)Dongle firmware gets flashed each time you try to update the headset (poor thing must have been flashed about 20 times, now - hope it doesn't burn out before the headset can get flashed [mini Update: dongle was probably flashed about 25 times before the software update fixed flashing the headset]Safety interlock prevents charging of battery while using the (included) 2.4 GHz dongle or Bluetooth (meaning can't choose to charge while listening via BT or dongle)Updates I: 1. Several months later, still cannot perform flash update to headset 2. On Mac Laptop, using USB-C to USB-A (female) adapter, and WebEx software, can randomly experience shrieking (high frequency feedback?) when listening to the "Game" device - have to switch over from Dongle to the Bluetooth audio channel (which is much poorer quality) - cannot duplicate bug, on demand, but it happens frequently and is annoying.Updates II: a few months after my last update, was checking on JBL website and found newer software:: original version: 1.5.1.3 - is the one that would not update new version: 1.6.0.1053 - did update. Software and updated firmware on headsetChanges noted with new software:1. minor tweeks to the way the TT (Talk Thru) / ANC button works (reversed order of short vs long, also added voice reading words, rather than "do doh!" sounds)2. unknown whether "shriek of woe" was fixed on Mac - will update

Overall Review: Feature Requests: Fix the flashing issue (done) , or allow for just the headset to be flashedAdd diagnostics: no error code is given when firmware flash abortsMake swapping battery easier (anticipated)

Pros: These headphones have a good sound, but they have problems like the microphone that don't listen to you if you literally don't attach it to your mouth, and another that's the one that bothers me the most, every time you go into some game or something that's full screen gives errors with windows, you have to be connecting and disconnecting until you want to fix yourself , even sometimes it's time to restart windows. :( :( :( :( :(

Overall Review: I don't recommend it, they don't fix those mistakes

Pros: -adjustable balance of game/application sound with chat volume with a turn of a dial. game too loud and cant hear your party? turn dial to the right. playing solo and your friends being annoyingly loud? turn dial to the left! -ANC IS AWESOME! no longer do i have to put up with semi trucks going by ruining my gaming experience! -surround sound is pretty neat! gotta figure out what games i have that's comparable. -double input... i have the usb plugged up into the computer and i can add a 3mm jack and plug that into my nintendo switch. so i can watch youtube and play at the same time! -one touch mic mute

Cons: -can get sweaty. i often find myself taking off the head set and wiping the sweat off the leather cushion. would be nice to find a cloth protector or sweat guard for this.

Overall Review: Great set of headphones for the price! It feels good around the head and comfortable for long periods of time. The mic quality is really good as well with sound! It has a removable mic which means that if somehow the mic breaks over time, you can easily replace it without buying the whole headset all over again! Some of the cons are that the build quality is mostly plastic and it feels light and flimsy. Also, it does not come with a splitter for pc gamers so be expected to buy a splitter along with your purchase. Overall, these are great pair of headphones for the price and quality!

Cons: Mine was DOA. When i got the headset it seemed great, until i tried to connect it to computer. After connecting the dongle to the computer the headset connected and started installing drivers. During the install the headset disconnects for restart and never paired back. If this happens there is nothing you can do, you have to return it. I was in touch with the help department for 3 days and they could not figure anything out. Also they let it slip that many of the headsets are DOA. (Hence why newegg no longer has them in stock. 05-22-2020) A few other indication that yours is DOA- - Everything else works. Bluetooth, Connection to a phone. - Sound options on computer. (says "JBL Quantum 800 chat, or JBL Quantum 800 Game) You can actually select them. - NO SOUND FROM COMPUTER though headset. Quantum engine app ( installs with the headset) Says No connection to dongle) The last extremely disappointing factor of this headset is that you can not charge the headset and use it and it takes 2 hours to charge. Once you plug in the headset to charge the headset does a shutdown. This is like apple in the way that they turned their head phone jack in to a charger.

Overall Review: I am sorry to say JBL messed up with this headset. Maybe after a few more models they will work out the kinks but i am moving on to something else.

Overall Review: it has a bad rattle and keeps cutting in and out