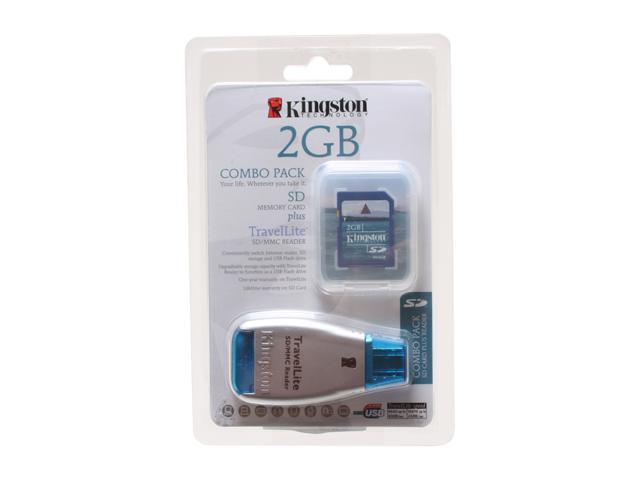 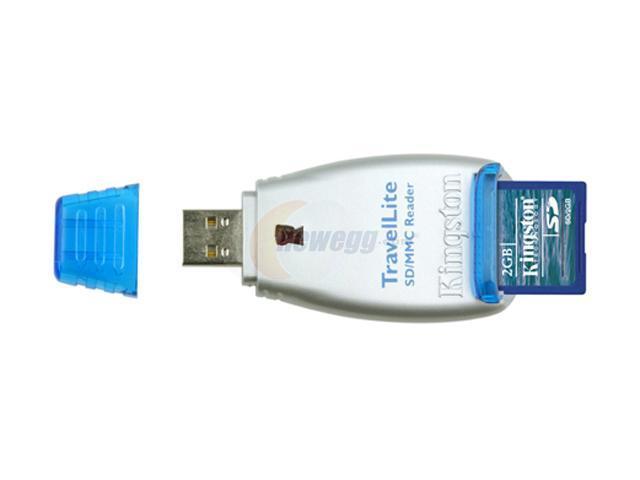 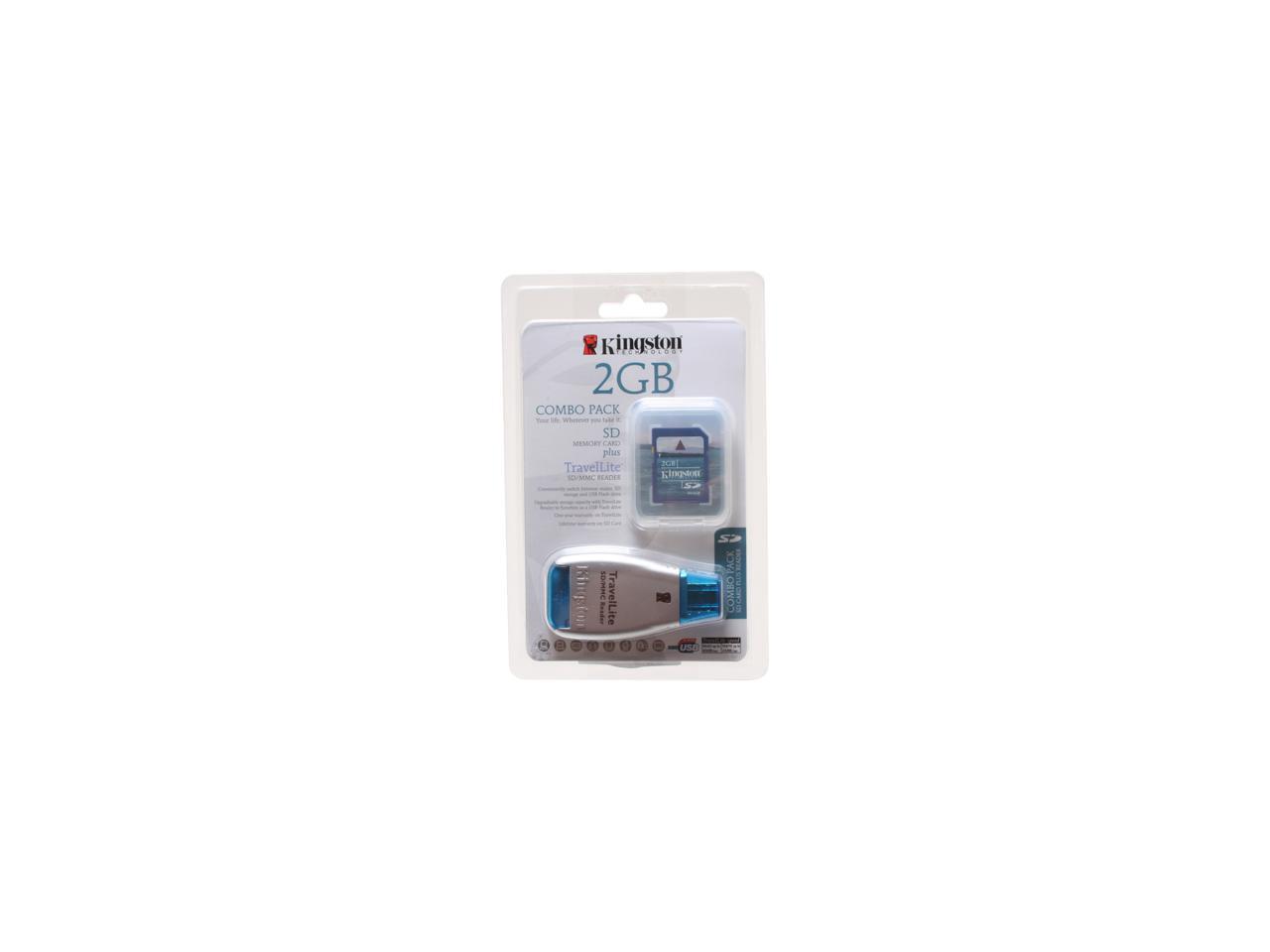 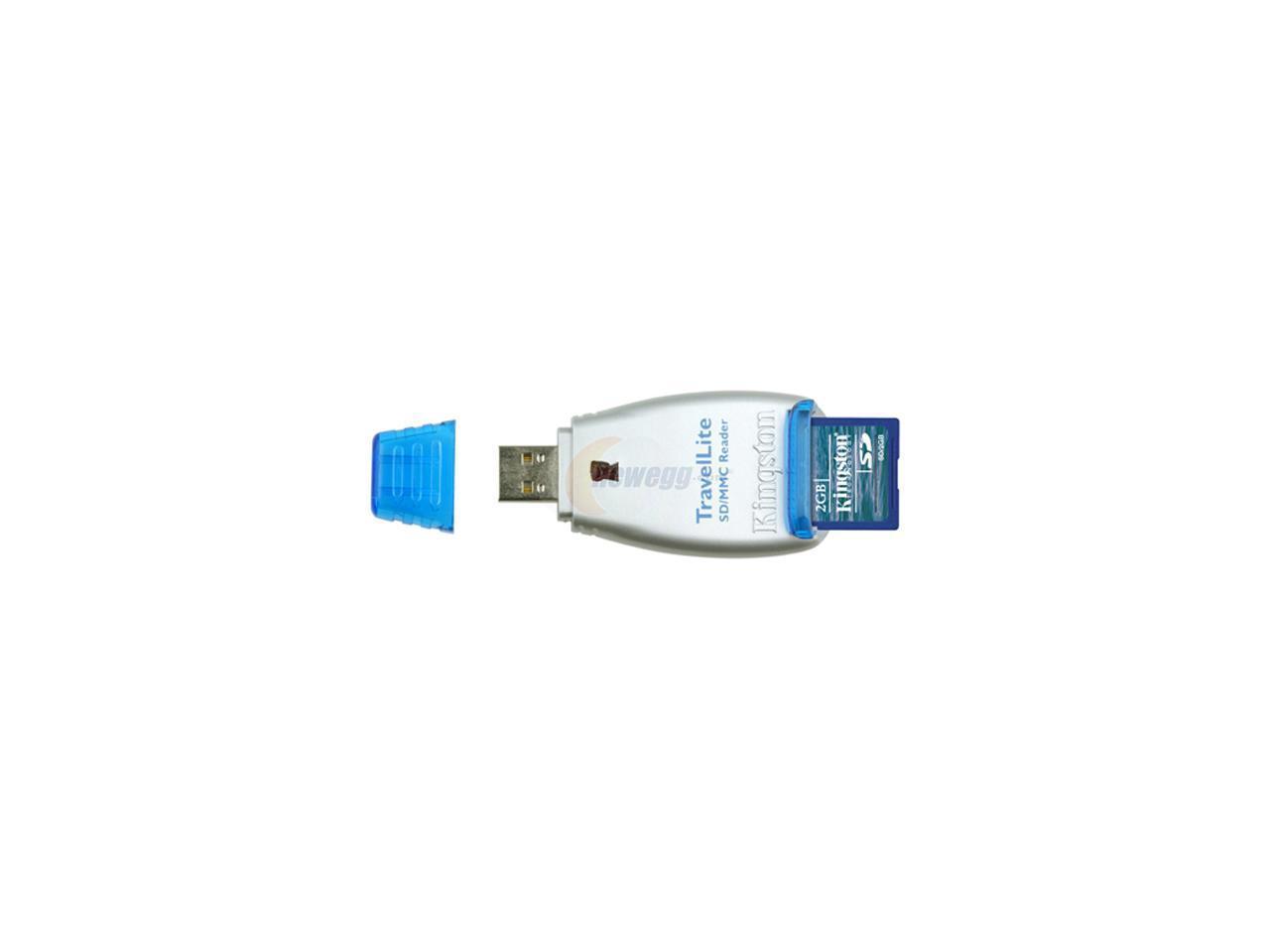 (79) Write a Review
OUT OF STOCK.
Specs
Reviews

Pros: Kingston is quality brand and 2GB means well over 1000 max resolution photos with my SD110 Sony Digital Elph. The Reader is an amazing tool. You can turn any SD card into a USB flash memory device. It can save time and battery or you can put it to other uses entirely. Compact replacement of USB transfer cable without worry of tangles.

Cons: Pricier than other flash memory, but those don't come with a Reader. I don't see the need for the clip on the back. Are you supposed to wear this on your belt/shirt pocket? The plastic on the Reader's flip up door seems like it could break if not careful, but it would not cause any functional loss.

Overall Review: Lifelong warranty is a joke because I've never had Kingston memory fail. If you ever lost or fear you'll lose your USB transfer cable for your device - no worries, as the Reader can take care of that for you now. Ordered with ground shipping, arrived next day. WOW! If you are in the market for an SD card - definately pick this up!

Pros: Great little reader comes with this card. You can put any SD card (or mini/microSD with an adapter) into the end and it acts like a normal thumb drive. Great deal!

Cons: none that I can see... well, the thumb-driver adapter has a red "activity" light on it which I don't like... makes me feel like something bad is going on... green would have been a better choice.

Pros: SD CARD: I'm suprised at its speed. I took 40 consecutive shots with my Nikon D50 and did not observe any detectable slowdown due to buffer overflow. (Wish I could say that about my other cards.) READ/WRITER: This unit is designed to carry with you; it features a pocket clip (on the body & not the cap) and a hole in the body to add a lanyard if you like. It also features a protective cover that flips over the SD card to protect it from dirt. I was impressed that the card 'latches' (push to latch/push to release), insuring that it will stay in the read/writer. The unit seems to have decent transfer speed.

Cons: SD CARD: none observed READ/WRITER: It is hard to design a product and make it so small that it won't easily get lost or be hard to handle. The downside of the read/writer is that while it is not large, the width could be an issue with notebooks which have vertical USB ports... the read/writer could become subject to some mechanical stress. (Propping up the notebook slightly will solve that problem.) Also, the unit may not physically be able to fit into recessed USB ports as found in some Dell desktops. However, a USB AM-AF eextension cable (you do have at least a couple?) such as NewEgg's $1.99 Extension Cable (Item #: N82E16812119125) will more than take care of this little problem. One other observation... when 'unlatching' the SD card, it doesn't completely clear the housing. This isn't a major issue, but for us guys with big fingers, it would nice if the card would protrude a bit farther.

Overall Review: Despite a few cosmetic glitches, given the performance and price, this is a great little unit. I highly reccomend it. (I ordered a second one!) My thanks to NewEgg for offering a name-brand product at a great price!

Pros: Great for my Canon A710 IS. Price is wonderful, bonus reader saves camera battery power!

Overall Review: I popped this card from the package right into my camera. It recognized it immediately. I get tons of pics with 2GB size and some pretty decent movie recording times too! NewEgg rocked the shipping, was packaged and sent the day after order.

Pros: These things have a great storage capacity. With the included USB reader, I do not have to plug in my camera via an annoying docking station. They can also be used as USB storage drives if needed.

Overall Review: Includes cases for the SD media. I bought 2 of these and they worked flawlessly in my digital camera on my recent trip to Japan (I took large pictures and continuious movie clips). Windows XP had no issues recognizing them as removable storage.

Pros: This is a great SD card (reads in every device I've tried it in so far) and the mini reader is a nice touch since you can essentially use the SD card as a flash drive.

Cons: If anything the reader is a bit large maybe??? There's nothing really to say that's negative about this SD card and reader.

Overall Review: I've only had this one day but I bought one on recommendation from a friend. He's had his for several months and never had a single problem with it. Newegg rocks the shipping again. Ordered this on Tuesday night about 8CST and it was in hand on Thursday at 3CST.

Pros: Giddy-up this thing is sweet. I was using it in the office today, and a co-worker noticed it and wants one too. I just order it again from Newegg.

Pros: It works like a champ in my Wii. Its a great card for a great price.

Cons: Its a memory card and it works... No cons.

Overall Review: I was somewhat dismayed to learn that I can't store virtual console games on the card but at least I don't have to listen to the godawful music in Excite Truck anymore. I gave the SD reader to my brother (I already have one) and he reports that it works. Nice little throw-in. The price point was great. This is why I try to avoit the local brick-and-mortars at all cost.